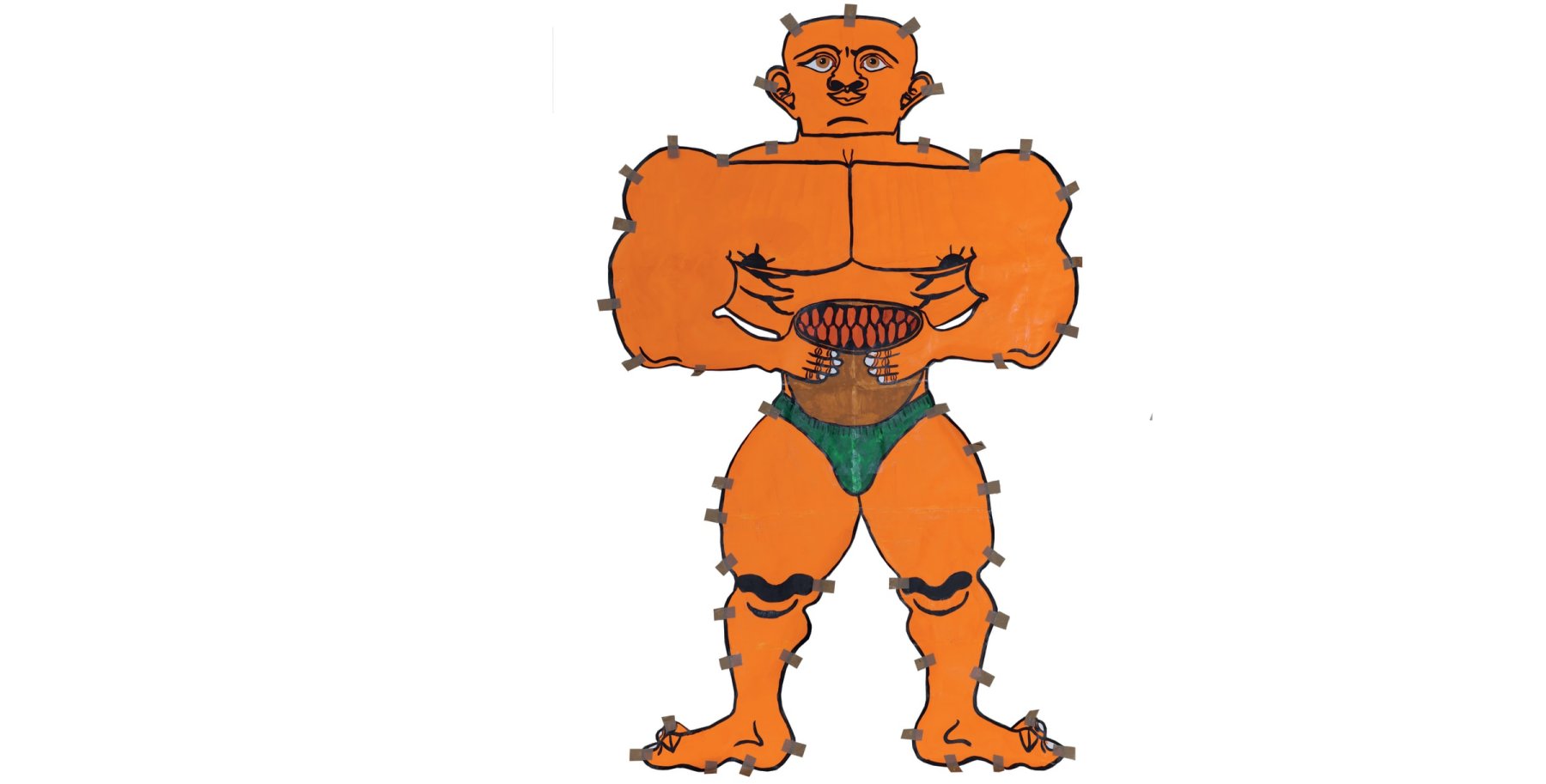 Bringing together six mainly self-taught international artists, each with intensely personal and imaginative styles, Prismatic Minds presents a new discourse on the act of repetition and the desire to surround oneself with others, real or imagined. Original, raw and energetic, the works on view introduce a carnival of contemporary characters through repeated motifs that have recurred in the artists’ work over many years. The exhibition questions the boundaries or limits of the repeated figure, exploring the deep-rooted personal compulsion to build a cast of characters through ideas of solidarity, family and companionship. Often theatrical or performative, and created without expectations from others, the paintings, drawings and sculptures of Prismatic Minds demonstrate practices of masterful storytelling and image-making.

Misleidys Francisca Castillo Pedroso
Cuban artist Misleidys Francisca Castillo Pedroso (b.1985) creates larger-than-life cut out characters, often bodybuilders, with powerful, muscular figures. Made using construction paper, their features are delineated with striking black outlines, and their outside edges are characteristically fringed with evenly spaced brown tape used by the artist to fix them to the wall. Ranging from several inches to eight feet tall, Pedroso’s archetypal repeated figures appear to represent male, female and non-binary characters, differentiated by variations of colour and individual style. In recent years, they have evolved to often incorporate window-like apertures revealing interior sections of the body. Pedroso was born with a severe hearing impairment and is without speech. Living in relative isolation, it is said that the artist has built her voice, personal expression and sociality through her artwork, and those close to her claim that Pedroso can be seen in ‘conversation’ with her works using hand gestures. Since the discovery of her work in 2014, Pedroso has been featured in numerous international exhibitions including Flying High: Women Artists of Art Brut at the Kunstforum in Vienna; New Images of Man, Los Angeles; and the Independent Art Fair in New York.

Makoto Okawa
Japanese artist Makoto Okawa’s (1976-2016) vibrant wall-mounted felted figures suggest the full spectrum of human emotions, often with a mischievous humour. The felted dolls, which Okawa made over the course of a decade, are known as ‘Makoots’, with forms ranging from the human figure to symbolic creatures such as worms and octopuses. Okawa was a prolific artist who also created vibrant, expressive paintings. He developed his felting technique at Atelier Corners, an art studio in Japan supporting artists with disabilities, which he attended from 2005. Okawa’s work has appeared in several exhibitions around the world, including the touring exhibition Nama Ato: Japanese Outsider Art which took place at Pallant House, Chichester, UK, Attenborough Art Centre, Leicester, and the Unlimited Festival at the Southbank Centre and Tramway, Glasgow from 2016- 17. His work is represented in a number of collections including the abcd collection in Paris.

Keisuke Ishino
Inspired by anime cartoons, Japanese artist Keisuke Ishino’s (b.1987) bright, bold origami figures (all made in 2018) combine the influences of Japanese popular culture and traditional craft. Ishino’s figurines represent a key focus of his prolific output, completing as many as 300 a year. Constructed from two-dimensional drawings made with colourful markers, their transformation into three-dimensional forms suggests a powerful physical presence. Ishino has created his paper figures since childhood. Recently, he moved to Atelier Corners in Japan and he has started to create drawings and three-dimensional artworks featuring numbers and Chinese lettering. Ishino’s work has appeared in many exhibitions of Japanese Outsider Art both across Japan and throughout Europe. In the UK his work featured in the exhibition Souzou at the Wellcome Collection in 2013.

Susan Te Kahurangi King
New Zealand artist Susan Te Kahurangi King (b.1951) shares much of her world through her drawings. The works in this exhibition, dated around 1965-67, feature encyclopaedic arrangements of human figures, animals and appropriated cartoon characters, transforming images encountered in daily life through her singular perspective. King is a self-taught artist who has been drawing prolifically since her childhood in the mid-1950s. She stopped speaking entirely at a young age and was later diagnosed with severe autism. In the absence of being able to communicate directly with others, she expresses her thoughts, feelings, understandings, observations, fears and fascinations through her skilful and innovative drawings. In the early 1990s, King stopped drawing for more than fifteen years, resuming her practice fully in 2008. King’s talent was recognised by her family at an early age and has been carefully archived throughout her life. Her work first came to public attention in 2009 and was presented over the following years in solo exhibitions in Sydney and New York; the Outsider Art Fair in Paris; her first solo Museum exhibition at the ICA Miami in 2016; and Intuit: The Center for Intuitive and Outsider Art in Chicago, 2019. King has works in a number of national and international collections including: The Philadelphia Museum of Art, the Museum of Modern Art (MoMA) New York, The American Folk Art Museum in New York, and the Chartwell Collection in Auckland.

Edward Dutkiewicz
British artist Edward Dutkiewicz (1961 – 2007) is known for his exuberant use of colour and energetic compositions, which can be seen in the large-scale works on paper in this exhibition. Dutkiewicz spoke of “possessing” his subjects, often recording his own varying moods in painted self-portraits. A self-taught artist, Dutkiewicz lived and worked in the East End of London. Born in Tamworth, Staffordshire, he was the son of Polish immigrants who came to Britain during the Second World War. Despite being diagnosed with multiple sclerosis at the age of 21, he continued to pursue his artistic career and had his first London exhibitions at Flowers Gallery in Hackney. He exhibited internationally, in Paris, Cologne, Stockholm and San Francisco, and undertook several notable commissions to create large-scale sculptures for the Chelsea and Westminster hospital, the Estorick Collection, and wall paintings and murals for the borough of Tower Hamlets. His work is in several public collections, including the Estorick Collection in London; and the charity Paintings in Hospitals, to which Dutkiewicz bequeathed all the works from his studio.

Rachel Heller
Characterised by an energetic and assured use of line and kaleidoscopic palette, British artist Rachel Heller’s inventive figures appear to be without vanity or pretension. The power of Heller’s work is its ability to convey the innocence and honesty of her characters within a sincere and natural expression. Artist Maggi Hambling CBE has said of Heller’s work that it “reveals human truth in an eye-opening way.” Although Rachel Heller (b.1973) was born with Down’s Syndrome, she found within her art a compelling means of self-expression from an early age. Her work been championed by leading British contemporary artists including Peter Blake, who opened her first exhibition. Heller studied at The Prince’s Drawing School in Hoxton and has attended summer schools at Slade School of Art, as well as completing a foundation course and diploma at Byam Shaw. She has exhibited in solo exhibitions at Flowers Gallery and group exhibitions including the Royal Academy Summer Exhibition, London, where she won the Hugh Casson Drawing Prize in 2006; and the Discerning Eye exhibition, Mall Galleries, London.