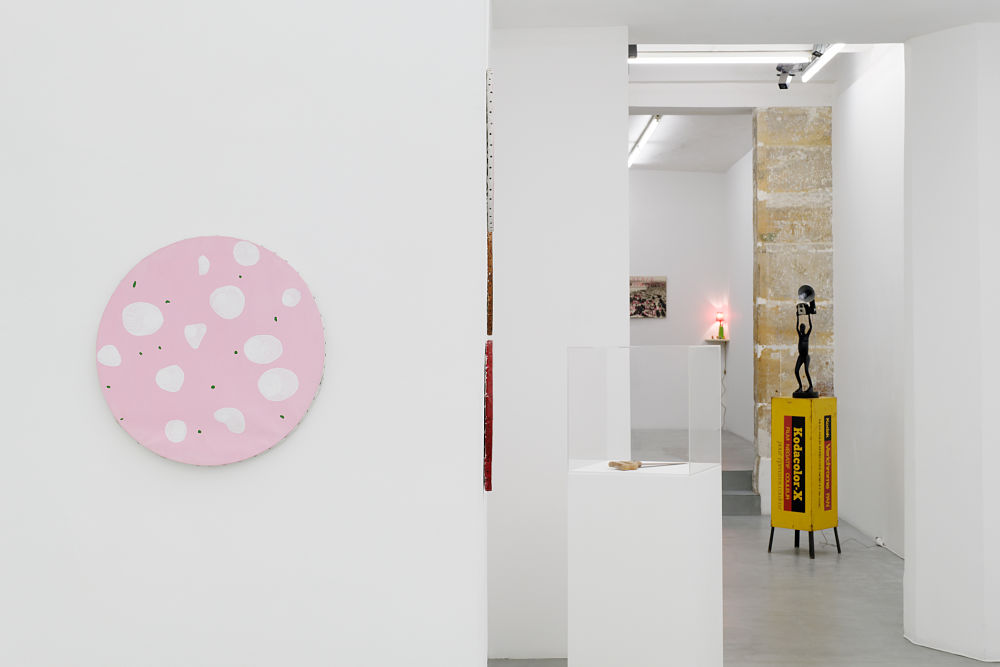 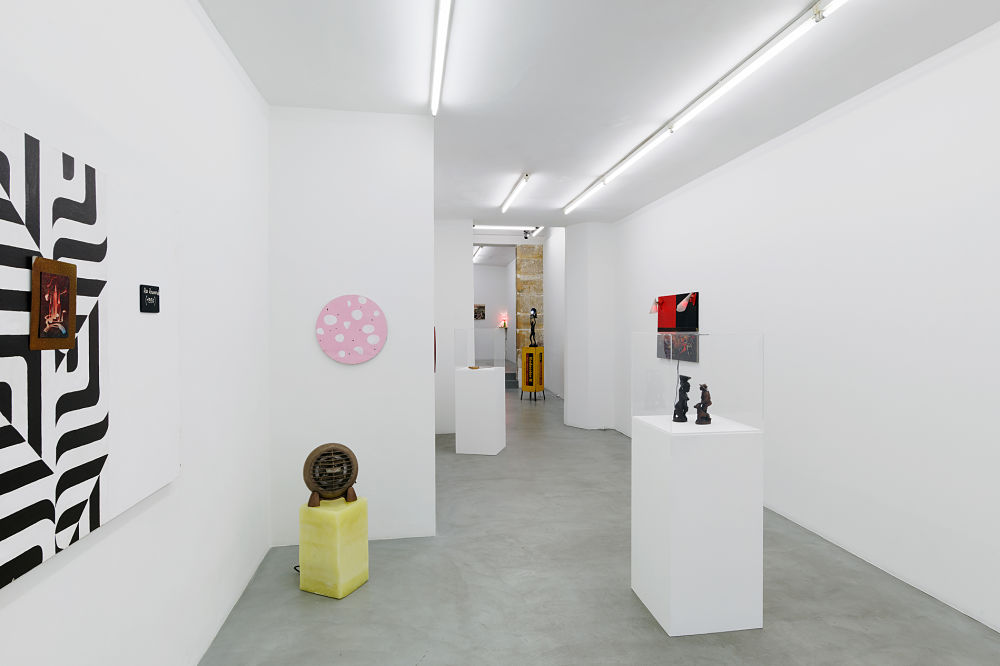 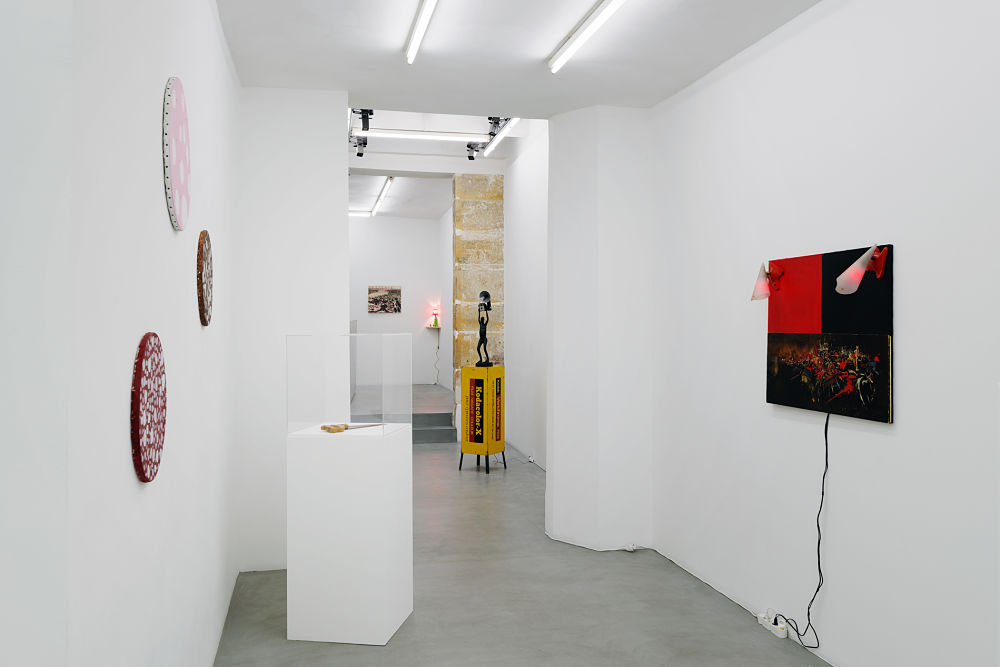 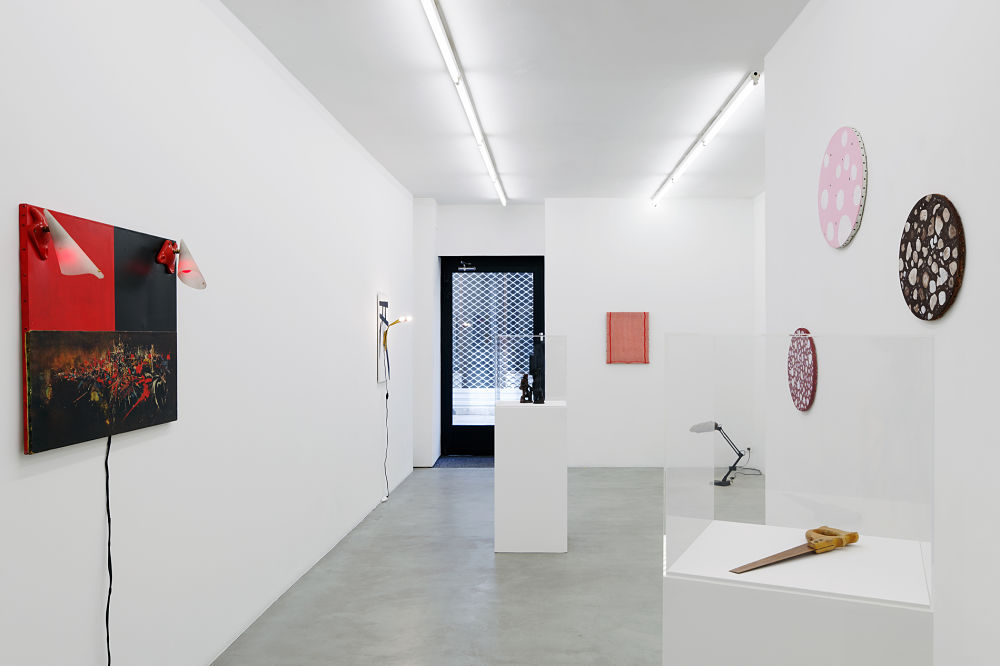 WHO?
Présence Panchounette, a collective of artists, founded in Bordeaux in 1969 and dissolved somewhere in France in 1990.

WHAT?
An exhibition of their “illuminated oeuvres”—installations that include an electric lighting system in their construction (light ttings, Christmas garlands, a photographic ash)—accompanied by a number of paintings and graphic works. The oldest piece dates from 1974 and reminds us that “Présence Panchounette is from Bordeaux in the same way as Dada was from Zürich.” The most recent is from 1989 and features a hammer and sickle, forever separated, attached to a blue chipboard background with a water pattern. Between these two dates, there are other works including six rather well-known dwarves listening to their master’s lesson as he perches on a lamp made from a bottle of detergent (Auch Zwerge haben klein angefangen, Dwarves start out small too, 1980), as well as circular abstract paintings entitled Toile mortadelle, Toile saucisson and Toile boudin (Mortadella painting, Sausage painting and Pudding painting, 1987).
Thus we have an exhibition, but above all a state of mind, a provocation, the rejection of modern good taste, a serious dose of humor and self-derision, references to the Situationist International and Marxism, a little French-style Pop art, plays on words that become plays on objects, critical thought, a place of honor for the banal and a smile (added to the all too serious Bauhaus logo).

WHERE?
At Semiose Gallery, 54 rue Chapon, in the 3rd arrondissement of Paris (a couple of steps away from the Pompidou Centre), France.

HOW?
Thanks to the commitment of certain members. Since the break-up of the collective, some of them have done their utmost to ensure Présence Panchounette achieves the position it deserves in the history of art, with for example, exhibitions at the MAMCO in Geneva (Back is Back, 2005), in the city of Bordeaux (CAPC and other sites, 2008) or at the Garage Cosmos in Brussels in 2018 with the aptly titled Ceci n’est pas une retrospective de Présence Panchounette (This is not a retrospective of Présence Panchonette).

WHY?
Because any self-respecting “contemporary” artist worthy of this honorary title has a duty to produce an illuminated oeuvre. This might seem like a wisecrack, but the illuminated oeuvre has become a genre in its own right, in the same way as painting, video or sound installations. To such an extent that the German town Unna has for a number of years hosted an art center dedicated to illuminated oeuvres (Zentrum für Internationale Lichtkunst). Today, even if Bruce Nauman’s neons (from the middle of the 1960s) and Dan Flavin’s uorescent tubes (from 1961 onwards) haunt numerous museums, it is impossible to come up with a list of those following on from them. Yet more than anything else, this type of work is the ultimate proof that an artist is at one with his times: a world of neon advertising, brash colors and ashy cuteness. Présence Panchounette doesn’t break with this principle but as always, does things DIFFERENTLY from everyone else! Perfectly conscious that art has decorative worth (and at the same time, a certain added semantic value), they decided to add a particular functionality: lighting. In short, in their case, it wasn’t a question of acquiring an honorary title but of solving a problem that all art lovers are familiar with: how to suitably light a work of art (once it has been taken home or hung in a gallery or museum). Always one step ahead, Présence Panchounette, rolled out a true “Institutional Critique” even before the term became fashionable in the 1990s. And I’m not talking about the post-colonial dimension of the African Section or the oeuvre Brownie Flash (1984) that answers numerous present-day questions concerning the primary arts! Présence Panchounette, not happy with just being from Bordeaux, was simply, to cite the title of a film by Maurice Lemaître: Always in the avant-garde of the avant-garde as far as the heavens and beyond.