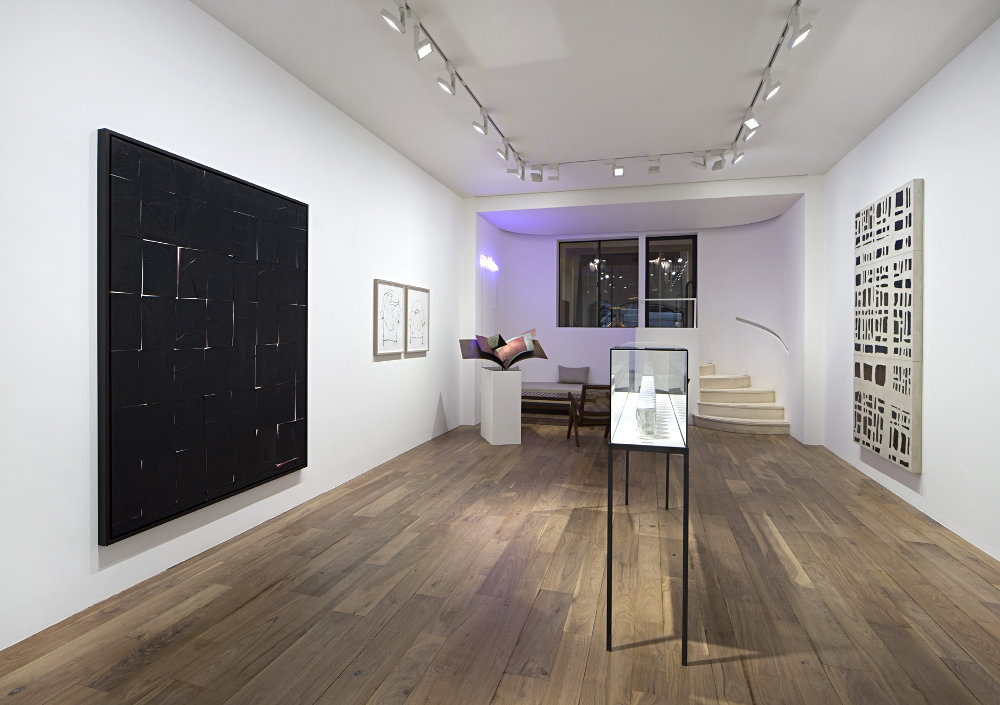 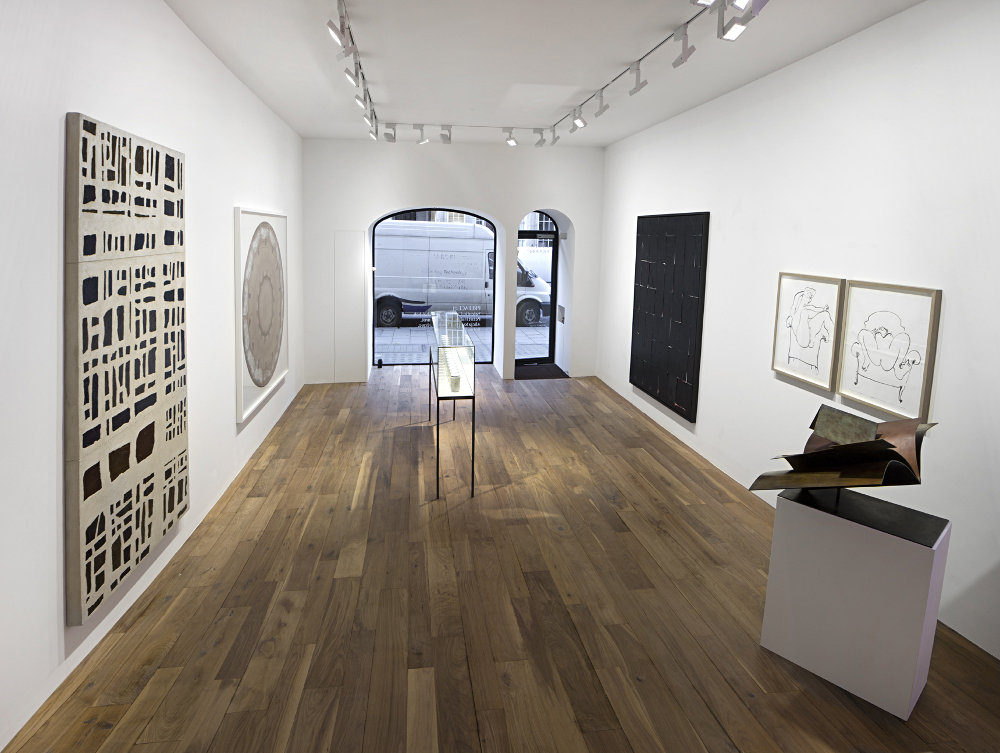 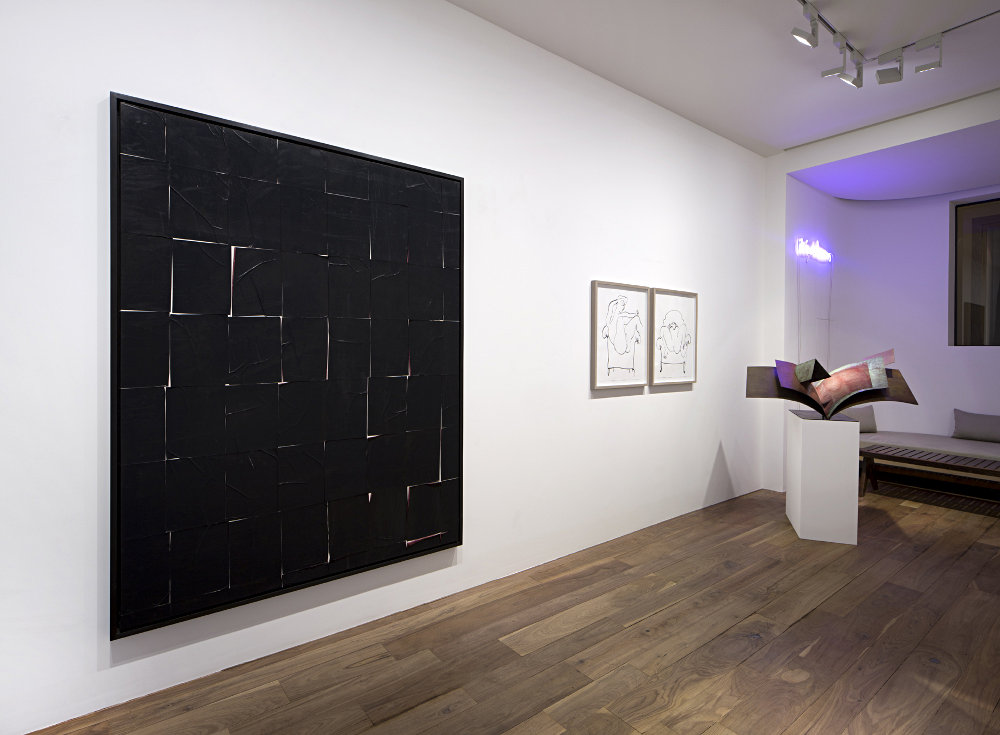 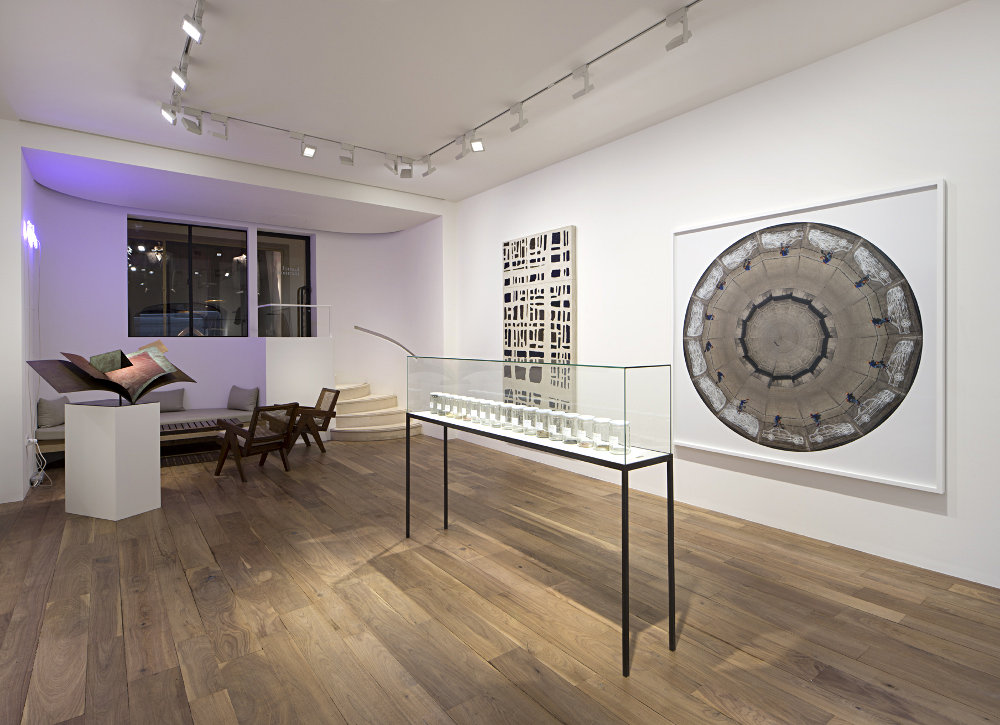 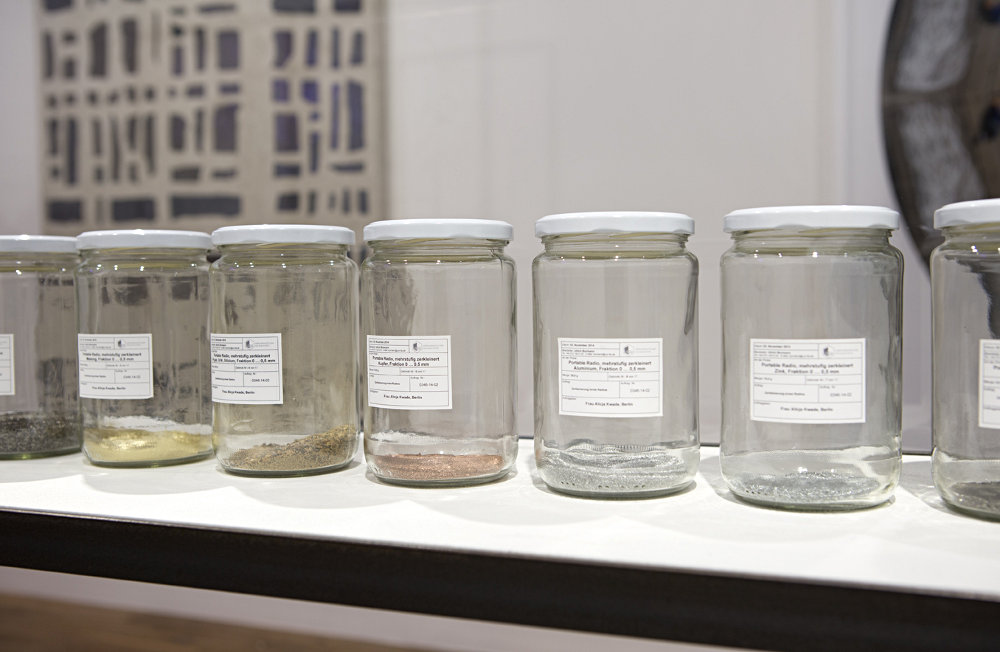 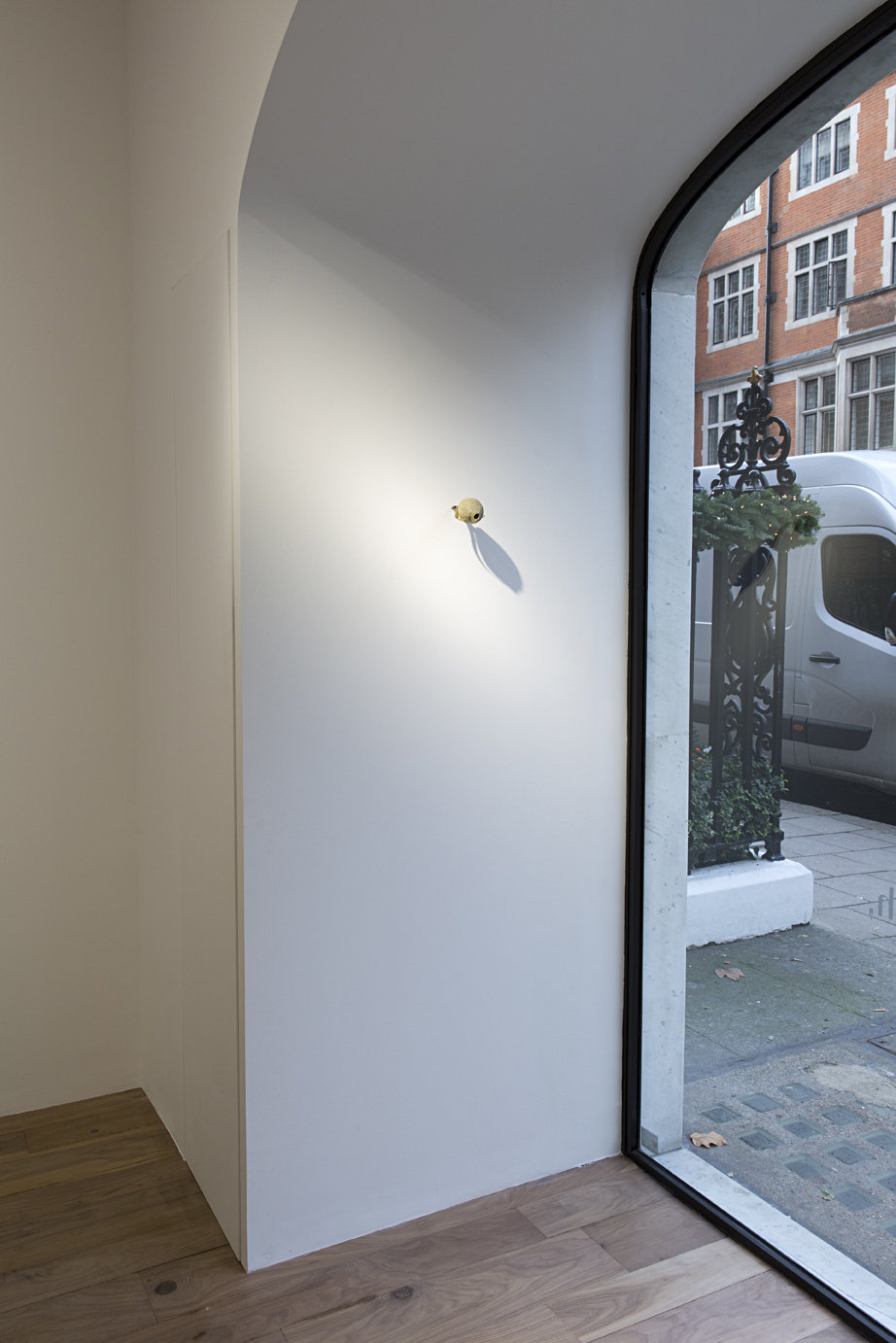 Valentin Carron
Valentin Carron’s practice is equal balance of sociological study, criticism of cultural artifacts and institutions from rural Switzerland. The artist is known for creating works that reproduce vernacular items. Valentin Carron gave an exact definition of “Vernacular” at his exhibition at the Palais de Tokyo in 2010: “An architectural form proper to a given geographical zone and period. Adapted to the climatic conditions of the region and the population’s uses”. The work titled The sour ricotta stands out and laughed blindly proposes a transubstanciation of a stained-glass window into a sculpture made with fiberglass and resin.
Born in 1977 in Martigny (Switzerland), Valentin Carron lives and works in Fully (Switzerland). His work has been exhibited in numerous solo shows: at the Lübecker Kunstverein, at the Kunsthalle in Bern, the Palais de Tokyo in Paris, the Kunsthalle Zürich, the Swiss Institute Contemporary Art New York; and took part in many group shows: at the SculptureCenter in Long Island, the mudac in Lausanne, the Migros Museum für Gegenwartskunst in Zürich, the Aargauer Kunsthaus in Aarau. Valentin Carron represented Switzerland at the 55th Venice Biennale in 2013.

Latifa Echakhch
Emblematic delays in some bureaucracy is conveyed by the carbon paper used in the work Sans Titre XXXIX which was also used in the late 1960s as a key tool of youth protest (especially for May 1968) to reproduce and distribute political leaflets. But no message appear here, as if the words displayed have been ruined by rain and time. The ideas are diluted in the foam of the days. And the work appears as the relic of a faded memory of a time when political commitment was seen as a religion.
Born in 1974 in El Khnansa (Morocco), Latifa Echakhch lives and works in Fully (Switzerland). Her work has been shown in numerous solo exhibitions: at The Power Plant in Toronto, the Museum Haus Konstruktiv in Zürich, the Centre Pompidou, the macLYON, the Hammer Museum in Los Angeles, the Kunstmuseum Liechtenstein in Vaduz, the Columbus Museum of Art; also in group shows: the MoMA PS1 in New York, the Palais de Tokyo and the Musée d’art moderne de la Ville de Paris. Latifa Echakhch was awarded the Prix Marcel Duchamp in 2013 and the Zurich Art Prize in 2015.

Petrit Halilaj
Growing up in a rural village in Kosovo during the Serbian-Kosovar war, Petrit Halilaj fled with his family after his house was razed to the ground. In his installations and sculptures, Halilaj explores this personal history and constructs dwellings and shelters that symbolize the personal space that was taken from his youth. Chickens, which featured heavily in his upbringing, recur in Halilaj’s work in live form, as a hybrid, deformed species in drawings, and through the image of the nest. Si Okarina e Runikut is inspired by ocarinas that are wind instruments (birds sound) that have been made in Kosovo since the Neolithic Era. This okarina was modeled by the artist, who undertook to learn the technique from one of the last ocarina makers in Kosovo, Shaqir Hoti, expressly for this series.
Born in 1986 in Kostërrc (Skenderaj-Kosovo), Petrit Halilaj lives and works between Berlin (Germany) and Pristina (Kosovo). His work has already been shown in several solo exhibitions at the HangarBicocca in Milano, the Kosova National Art Gallery in Pristina, the Kunsthalle Lissabon, in Lisbon, the Fondation d’entreprise Galeries Lafayette in Paris, the WIELS — Contemporary Art Center – in Brussels, and the Kunst Halle Sankt Gallen; as well as in group exhibitions, the New Museum in New York, the Kunstverein Nürnberg and the Bonner Kunstverein.
Petrit Halilaj represented Kosovo, for its first appearance, at the Venice Biennale in 2013.

Camille Henrot
This diptych is dealing with the moods associated by the artist to Monday, the first day of the week: the desire for reclusion, intimacy, idleness and comfort. Exploring the legacy of James Joyce, Marcel Proust and Henri Matisse who created their universes from their single beds, she seeks to express our own ambivalence between ambition and depression, laziness and creation. In the “Tropics of Love” ongoing drawings series, Camille Henrot splices up and reassembles images from ethnographic archival imagery and pornography — signifiers of geography, gender, sexuality, ethnicity and special difference.
Born in 1978, Camille Henrot lives and works in New York. A 2013 artistic fellowship at the Smithsonian resulted in her film Grosse Fatigue, for which she was awarded the Silver Lion at the 55th Venice Biennale. Henrot has forthcoming solo exhibitions scheduled at the Palais de Tokyo in Paris; the Hammer Museum in Los Angeles; and Fondazione Memmo in Rome. She has had solo exhibitions at the New Museum in New York; Schinkel Pavillon in Berlin; New Orleans Museum of Art; Musée du Jeu de Paume in Paris. Her work has been included in group shows at MoMA in New York; Centre Pompidou in Paris; Astrup Fearnley Museet in Oslo; Stedelijk Museum in Amsterdam; and SculptureCenter in Long Island. She is the recipient of the 2014 Nam June Paik Award and the Edvard Munch Art Award 2015.

Alicja Kwade
In Transistor, different radios have been transformed into powders, changing the original form and function of the initial objects. The idea behind Alicja Kwade’s work is to be considered trough the prism of the Aporie, the insolvable contradiction which appears in an argument. Alicja Kwade wants to retranscribe the first moment, the initial shape of the object, back to the day it never existed as such. The hazard takes then a prominent importance in the process of creation and how particles find their way into becoming the final object, the final object of art.
Born in 1979 in Katowice (Poland), Alicja Kwade lives and works in Berlin (Germany). Her work was exhibited in multiple solo shows in institutions such as the Zentrum für Kunst und Medientechnologie in Karlsruhe, the Polnisches Institut in Berlin, the Würth Haus Berlin, the Oldenburger Kunstverein, the Kunstverein Bremerhaven, the Westfälischen Kunstverein, the Kestnergesellschaft in Hanover and the Hamburger Bahnhof – Museum für Gegenwart in Berlin. She also took part in group shows: at the Museum of Contemporary Art Detroit, the Palazzo Strozzi in Florence, the KW Institute for Contemporary Art in Berlin, the Witte de With in Rotterdam, the SculptureCenter in Long Island, the Domaine Pommery in Reims, the Palais de Tokyo in Paris.

Claude Lévêque
Major figure on the international contemporary arts scene, Claude Lévêque employs neon as a universal standard using it to reproduce sentences or simple words in a trembling, fragile handwriting, in this case the one of Romaric Étienne. Such handwriting contains his work’s whole philosophy, throwing the viewer back on his own experiences. These sentences are fragments of language, liberating, incantatory affirmations, like poetically corresponding states of mind.
Born in 1953 in Nevers (France), Claude Lévêque lives and works in Montreuil and Pèteloup (France). His work has been shown in numerous solo and group exhibitions, both in France and abroad: at the Centre Pompidou in Paris, the Villa Medici in Rome, the Fundació Joan Miró in Barcelona, the PS1 Museum and the Guggenheim in New York, the Mori Art Museum in Tokyo, the Hamburger Bahnhof — Museum für Gegenwart in Berlin. In 2009, Claude Lévêque also represented France at the 53rd Venice Biennale.

Robin Rhode
Working primarily in the streets of Johannesburg, Robin Rhode uses walls and sidewalks as the stage for his exuberant, narrative interventions and performances. Captured in serial photographs and stop-motion videos, Rhode’s work explores urban youth culture, socioeconomic inequality, and outgrowths of postcolonialism. By creating absurd, impossible situations, like drawing a bicycle on a wall and attempting to ride it, Rhode references slapstick comedy and minstrel shows, expressing the struggle for equality and dignity with poignancy, humor, and poeticism.
Born in 1976 in Cape Town (South Africa), Robin Rhode lives and works in Berlin (Germany.) His work has already been shown in several solo and group exhibitions: at the Haus der Kunst in Munich; the Hayward Gallery and the White Cube Gallery in London; the Wexner Center for the Arts in Ohio; the Los Angeles County Museum of Art (LACMA) and the National Gallery of Victoria in Melbourne.