GALLERIA CONTINUA / Les Moulins presents the exhibition Pouvoir & Pouvoir, a collective show that brings together twenty-four artists from distant geographies to develop a path of reflection on the theme of “power”. 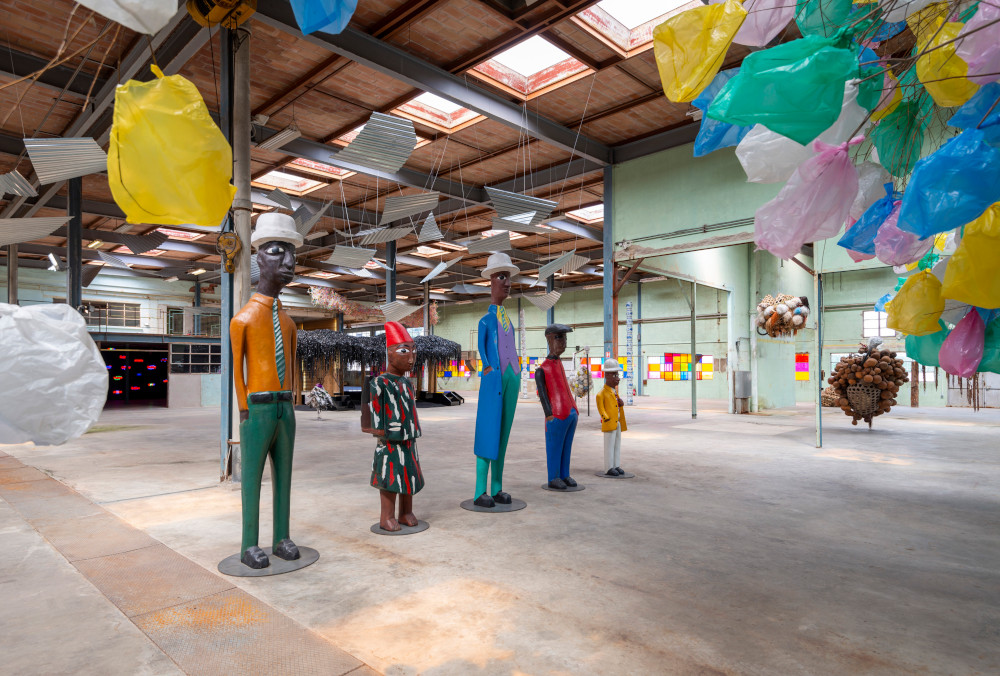 Power is a broad and controversial subject, on which human beings have been questioning for centuries – too dangerous for the vastness of its meanings and too dense to be deeply caught. “Power” is therefore faced on two fronts here at Les Moulins.

On the one hand, we can find an absolute power designing the systems of social organization – a delegated power that creates the ways of our daily actions, the organized power that chooses what we have to choose. An external power.

On the other hand, the exhibition evokes and indicates the existence of an internal power, contained within every human being as an actual potential. An intimate power that belongs to us and animates us.

Thus, Michelangelo Pistoletto proposes, in the itinerary of the exhibition, his historical work of 1978 Fame, Amore, Arte (Hunger, Love, Art), composed of suitcases full of raw materials on which you can read the verb “pouvoir” (to be able to) declined, as an invitation to action: je peux tu peux il peut…

Through his concept of “demo-praxia”, Michelangelo Pistoletto invites visitors to lend their “special” chair – the one they feel and participate in the creation of Terzo Paradiso (Third Paradise). These chairs have a story and sitting on them visitors can discuss and listen to each other. The invitation to dialogue is reiterated by the artist with Mar Mediterraneo, a mirroring table built on the morphology of the Mediterranean Sea – shores that have hosted the rise of countless unresolved tensions and clashes of power.

Tensions are also discussed in the artwork Canto V by Arcangelo Sassolino, where natural and mechanical tensions declaim their power.

The works of Lucy+Jorge Orta have a political character. In Trazado de Indias: Parceas Dominantes Argentina, Mondrian’s pictorial manners tell, through a colour code, the difficulties in expressing the power of thought in the 70’s Argentina, when the government of the country was brutally repressing all forms of opposition to its power.

In the exhibition, we are also pleased to welcome four artists currently on display at the 58th International Art Exhibition – Venice Biennale: Shilpa Gupta, Zhanna Kadyrova and Sun Yuan & Peng Yu, who animate our journey from different points of view.

Further, extremely powerful works, such as Untitled by Jannis Kounellis and Le grand miroir du monde by Kader Attia, show the strength of a profound integrity. Ai Weiwei invites us to radical gestures as well. With yellow and black shoe laces, Nari Ward conceived a work specifically for the exhibition, thinking of today’s France. The ways of investigating the power manifested in the works of the invited artists are very diverse.

Finally, Inside Out by JR – another special project in Pouvoir & Pouvoir – is constituted by a mosaic of faces and stories encapsulating the living power embodied in each person. On the JR’s wall, many of the people who have animated Les Moulins’ nowadays history with their energy and their ideas are on display. Among all these faces, there are also those of the staff at GALLERIA CONTINUA / Les Moulins. Their thoughts – here reported – have been collected for Pouvoir & Pouvoir as hints for intimate reflection.

There is being, having, and power—a word which these preconditions often hinge upon. An infinitely substantivised Power can resemble the gymnastics of the economy, or self-consumer theory: ‘Power – Power’ poetically interrogates the omnipotence of the tycoon, and the fierce capacity of activism (the power to act) at both the individual and collective level, as well as the gulf that separates them. In this space we find measures of what hinders, constrains, holds back, oppresses, imprisons, and resists—an ambivalent word in this respect, since it saves and frees: resisting makes it possible to dare, to push our own boundaries, our timid renunciation in the face of the multitude of possible choices (this absolute desire), and attain what makes us free people, for better or worse. We encounter a volley of paving stones with their soft nuances, the analysis of Karl Marx dressed in Vuitton, softwood handcuffs, intermingled portraits of African masks decked out in accidental Western trinkets, the suspended body of a losing struggle with the desire to embark, the ogreish smile of a collector Buddha, the torture of torsos and stones of a pneumatic hell, a CRS battalion deflating in a roly-poly motion, a mirror of the world shattered with millions of reflected images, and giant fetters to complete the circle…
Grégoire

Power is temptation. Freedom looks like power but as an ideal. An ideal that may transcend the human condition. Power and freedom engage in a subtle, sometimes brutal and even violent struggle. But power often prevails in the name of the Reason of State – the supreme arbiter who legitimizes the act without reason.
Livia

I like to think that power is an ability born of a condition of freedom and disappears where violence begins. Hannah Arendt distinguishes power from other adjoining realities, such as potency, strength and authority, and violence. One does not obey violence in the strict sense. Obedience implies recognition and therefore, paradoxically, freedom. Power does not suppress freedom, but on the contrary hypothesizes it to exist.
Charlotte

They have raised us with the idea that everything can be, if we commit ourselves with good will. We have thus dedicated ourselves to our individual potential, perhaps leaving the high hierarchies too free in the power that has been delegated to them. They are making us believe that we are all masters of an absolute power to unleash – in the restricted square meters of vital space they have granted us. We become absolute masters of useless decisions to the positive evolution of the human being.
Power instead reigns supreme, crosses the centuries and peoples, incarnating in the just and the unjust. Power cannot be denied, it exists as an abstract principle and manifests itself fiercely, adopting the logic of the minds that interpret it. So, do we manipulate power or is it power that manipulates us?
Giusy

‘[The Representatives of the people] must envisage that great responsibility follows inseparably from great power.’(1)
With these words, in May 1793, the National Convention— the first political power in France to be elected under universal suffrage (1792)—defined the spirit in which the people’s elected deputies were to work. They were to work in particular on writing the Constitution of Year I, a fundamental text that highlights the paradoxes at play around the notion of power. The text of the first constitution is in fact highly democratic, defining a decentralised political system made up of assemblies situated throughout the national territory. But the constitution was written during a particularly tense period of the French Revolution, rocked by riots, civil war, and revolutionary wars. The First Republic was moreover governed by an exceptional power relying on force and the repression of its opponents. It was the time of the Terror, and the Constitution of Year I, solemnly proclaimed in June 1793, would never be applied.
Great power, great responsibilities: the maxim makes us smile today, since its recuperation by US superheroes. And yet it is interesting to see that at the end of a historical period when the word ‘power’ was coupled with the word ‘absolute’, when a society wanted itself to be new and was looking for a new way to organise, one of the essential questions that emerged in respect to the use of power was that of responsibility. Power, expressing an act, has consequences, and is understood as a relational, and therefore social notion, placed somewhere between freedom and constraint. Paradoxically, it is when it declares its wish to protect, even increase freedom that a ruling power bases this on increased constraints. When these become too strong, the responsibility of the people may be that of revolt. The revolutionaries understood this when they concluded the Declaration of the Rights of Man and of the Citizen in 1793 with the following words: ‘When the government violates the rights of the people, insurrection is, for the people and for each portion of the people, the most sacred of rights and the most indispensable of duties.’(2)
Rémi