This group show opens 2022 with a number of artists that have all created portals of one kind or another – visible, conceptual, mythical or otherwise – remaking the pictorial window and breaking through to the other side, leading viewers on a journey through the looking glass. The assembled works, some historical, others completed recently, open up the gallery space through a number of physical, metaphysical and metaphorical portals, offering passage to entirely speculative or abstract realities, new spatial prospects, fictional worlds and even paths through time. 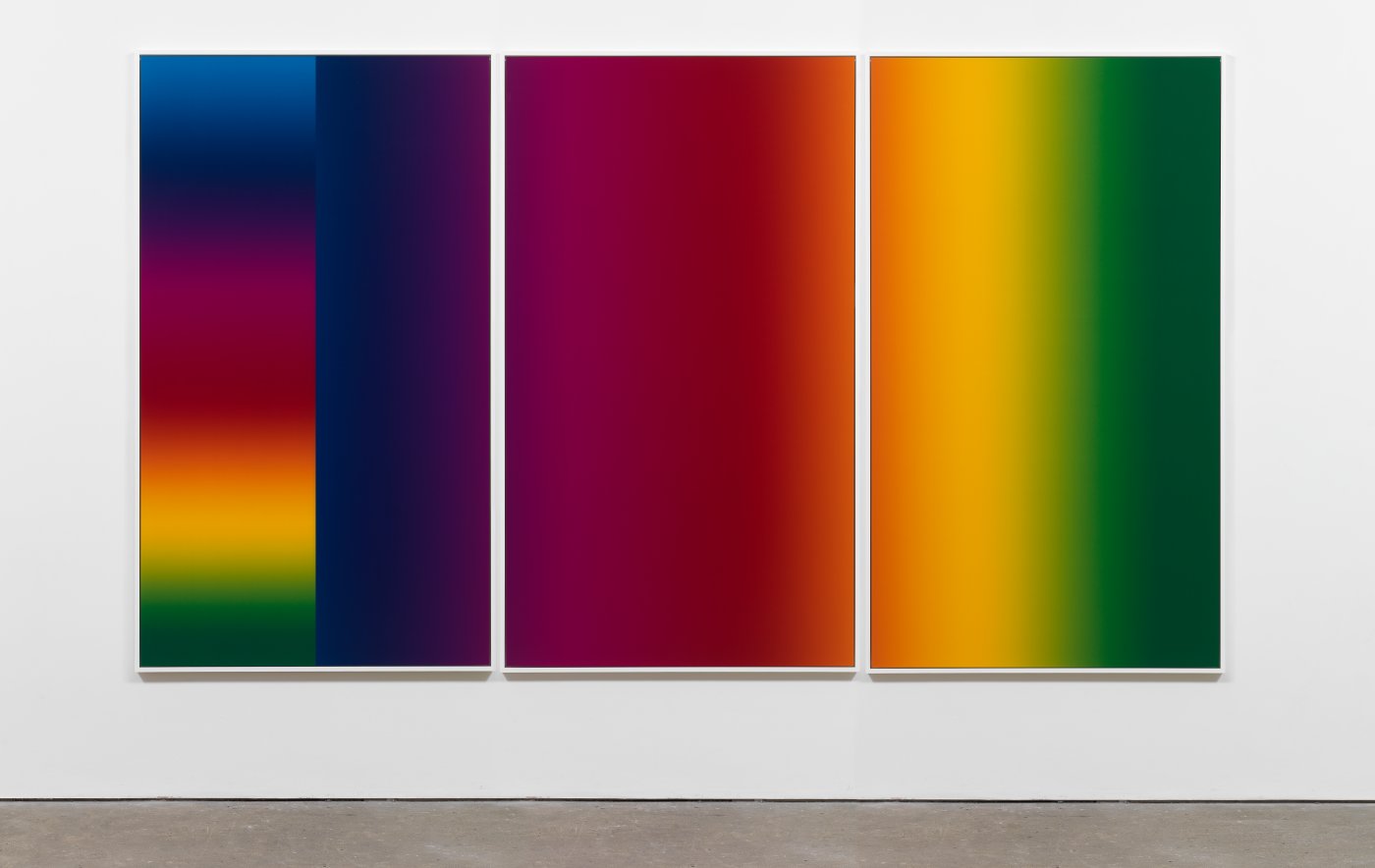 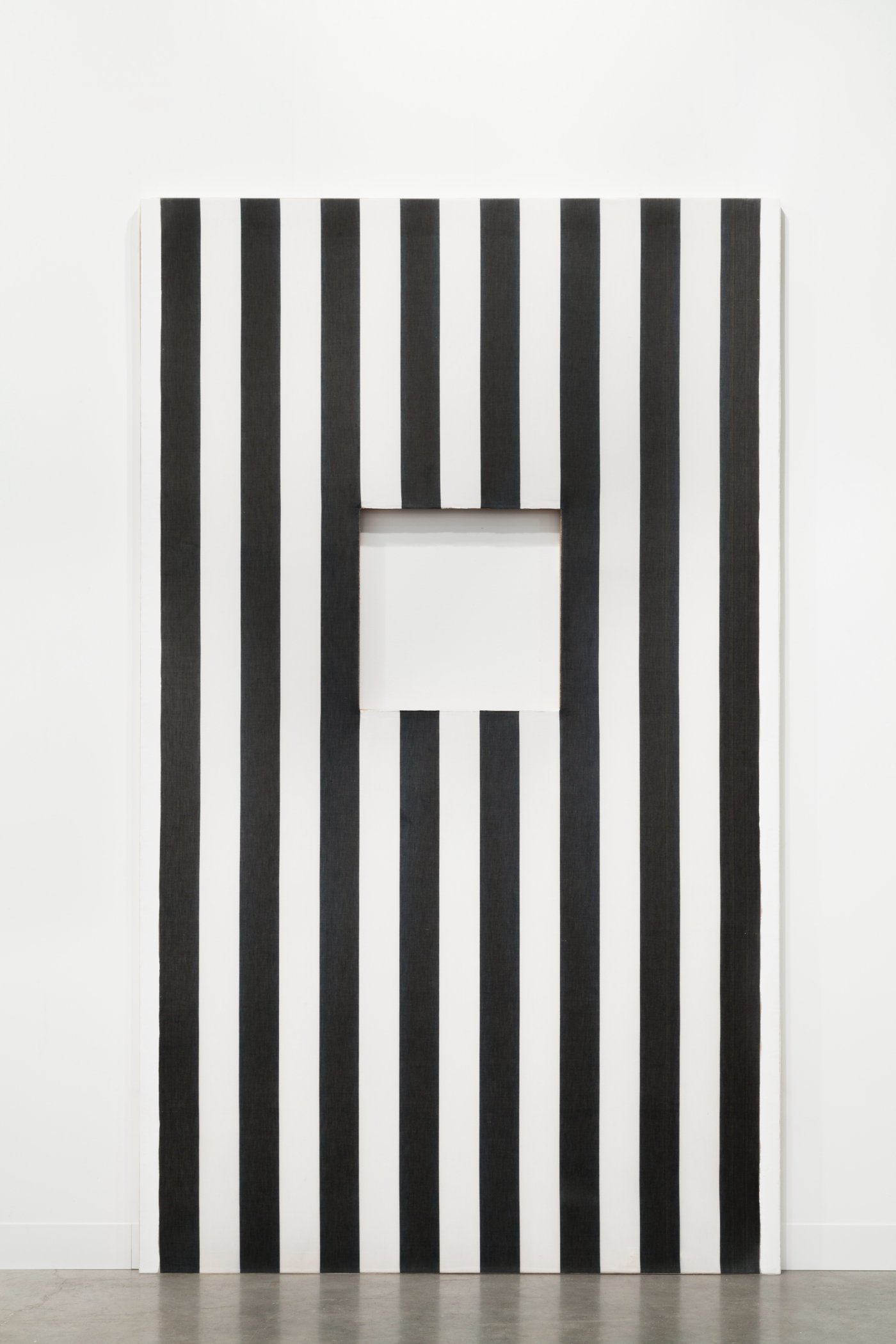 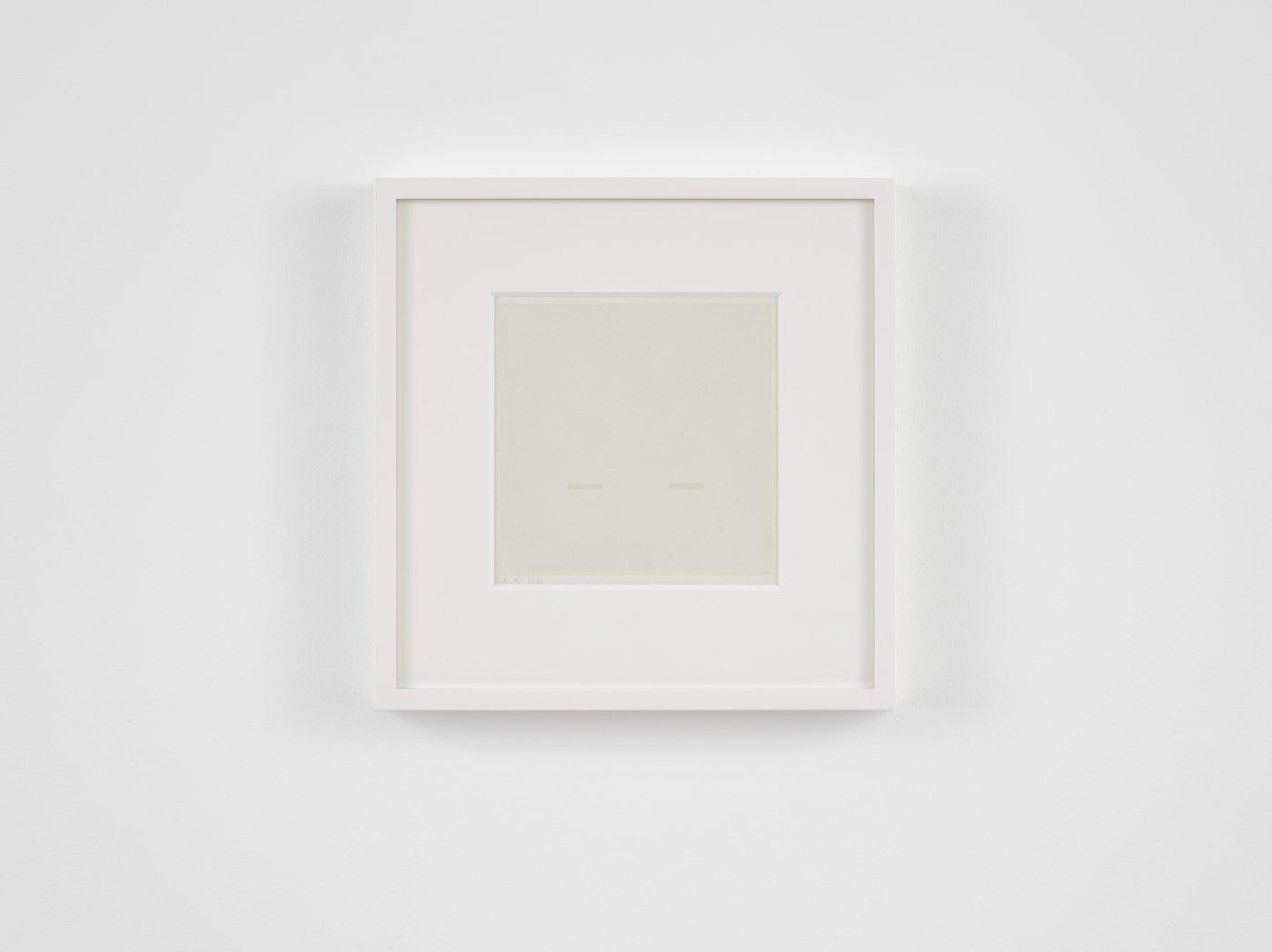 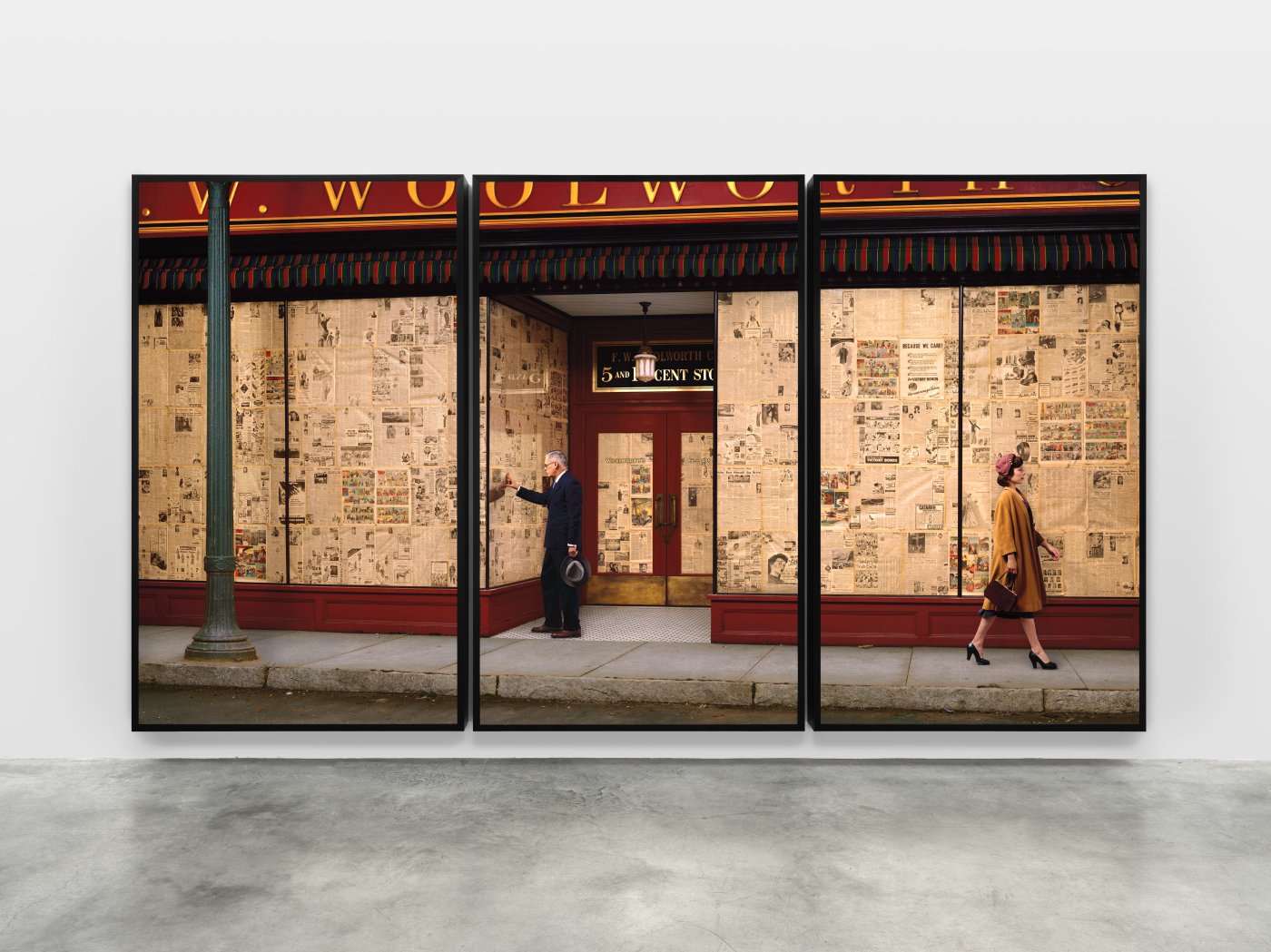 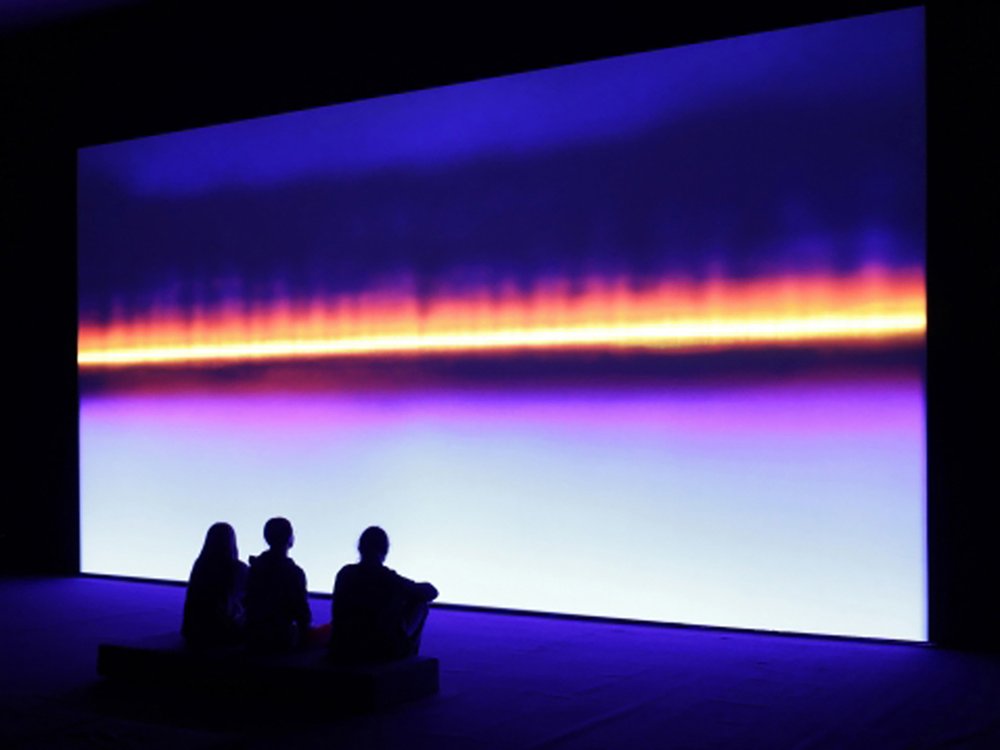 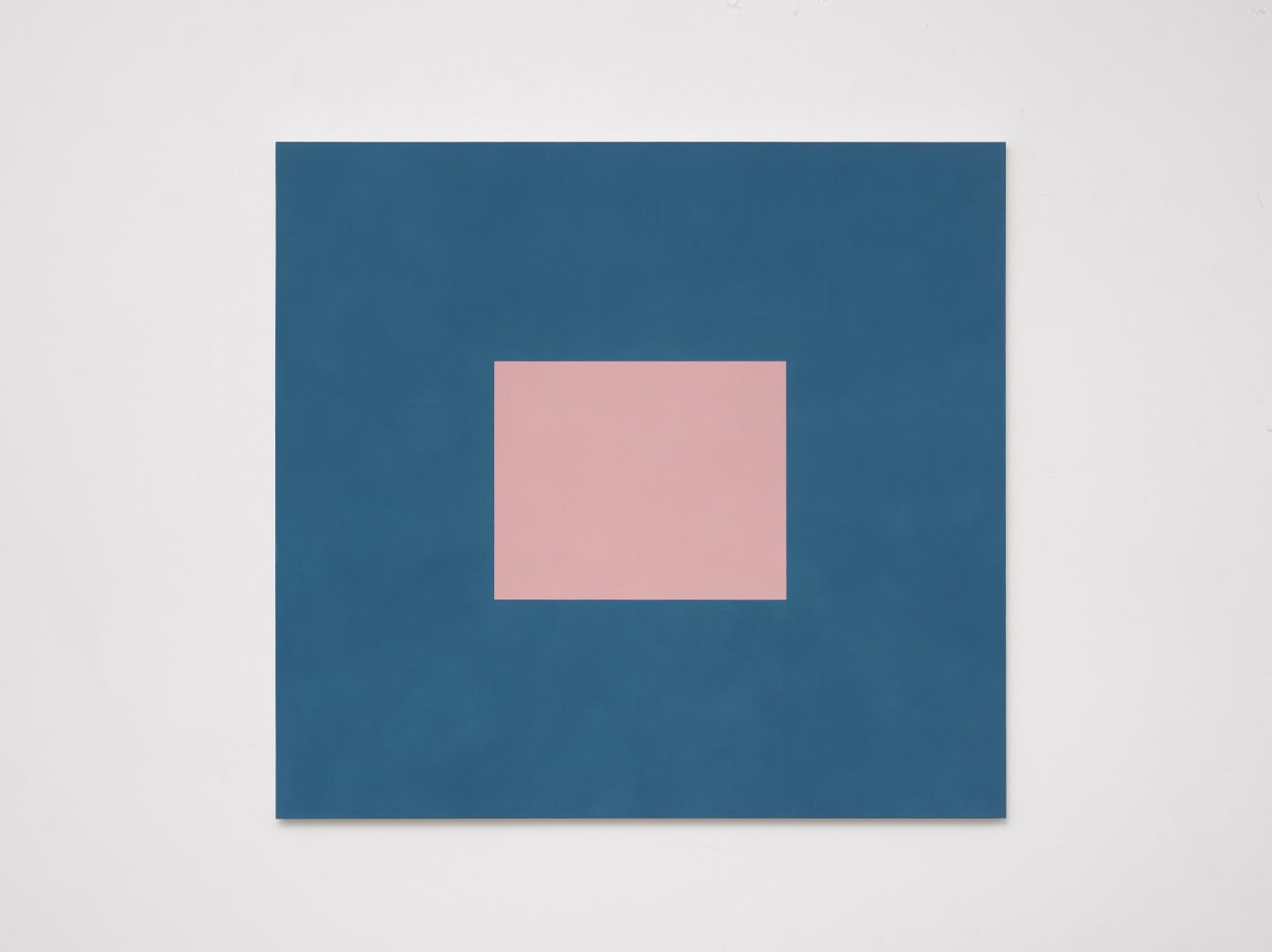 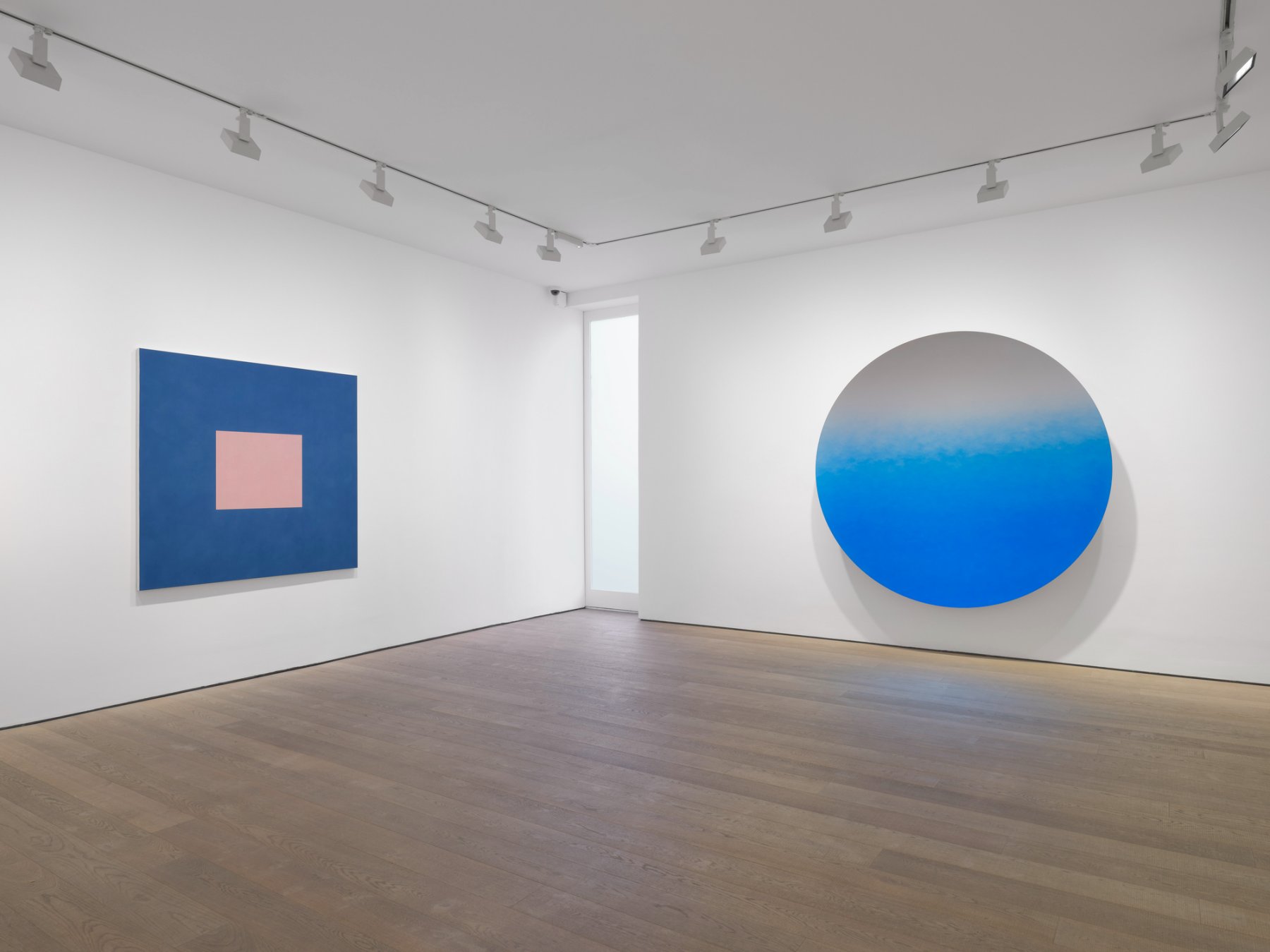 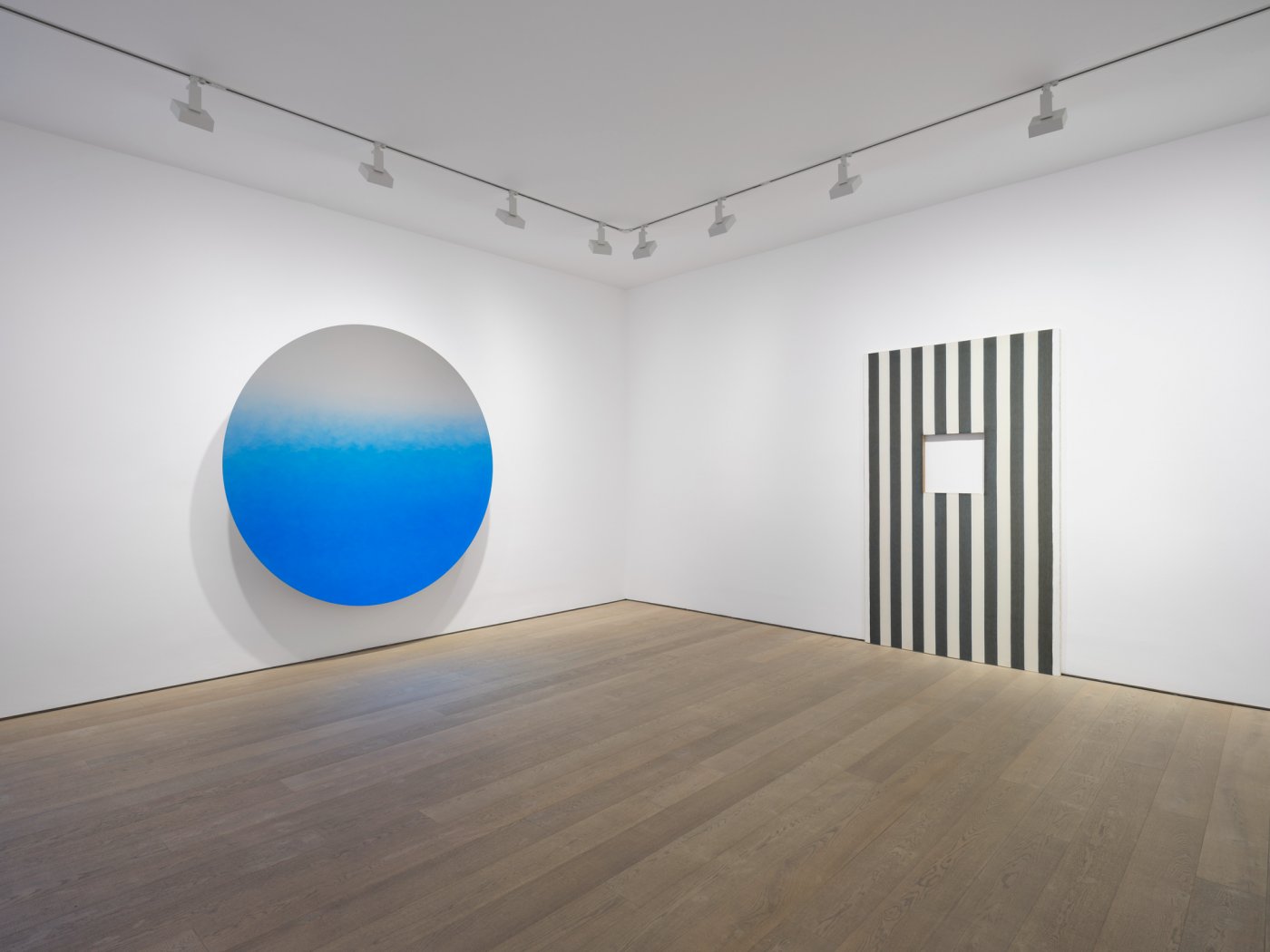 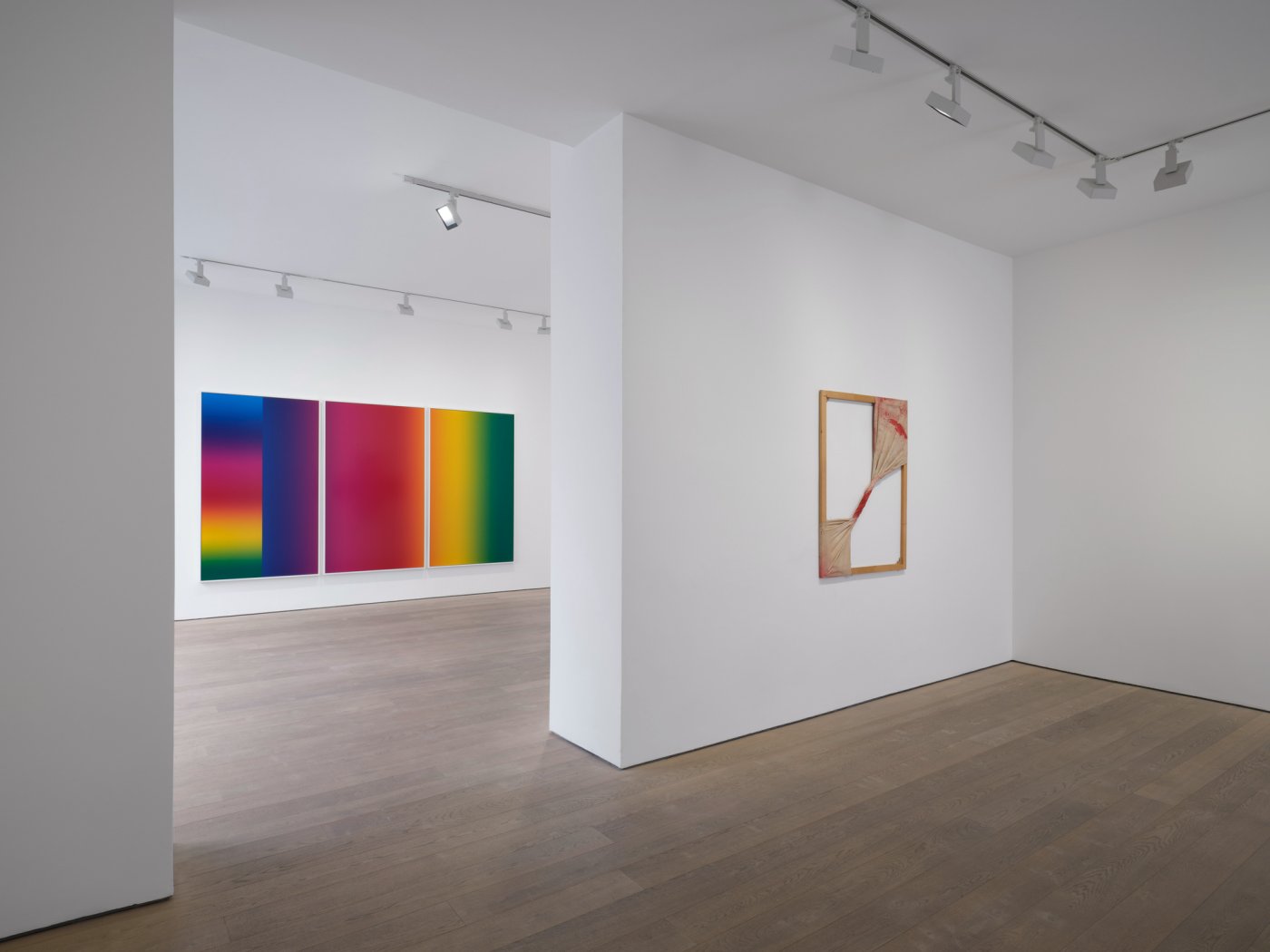 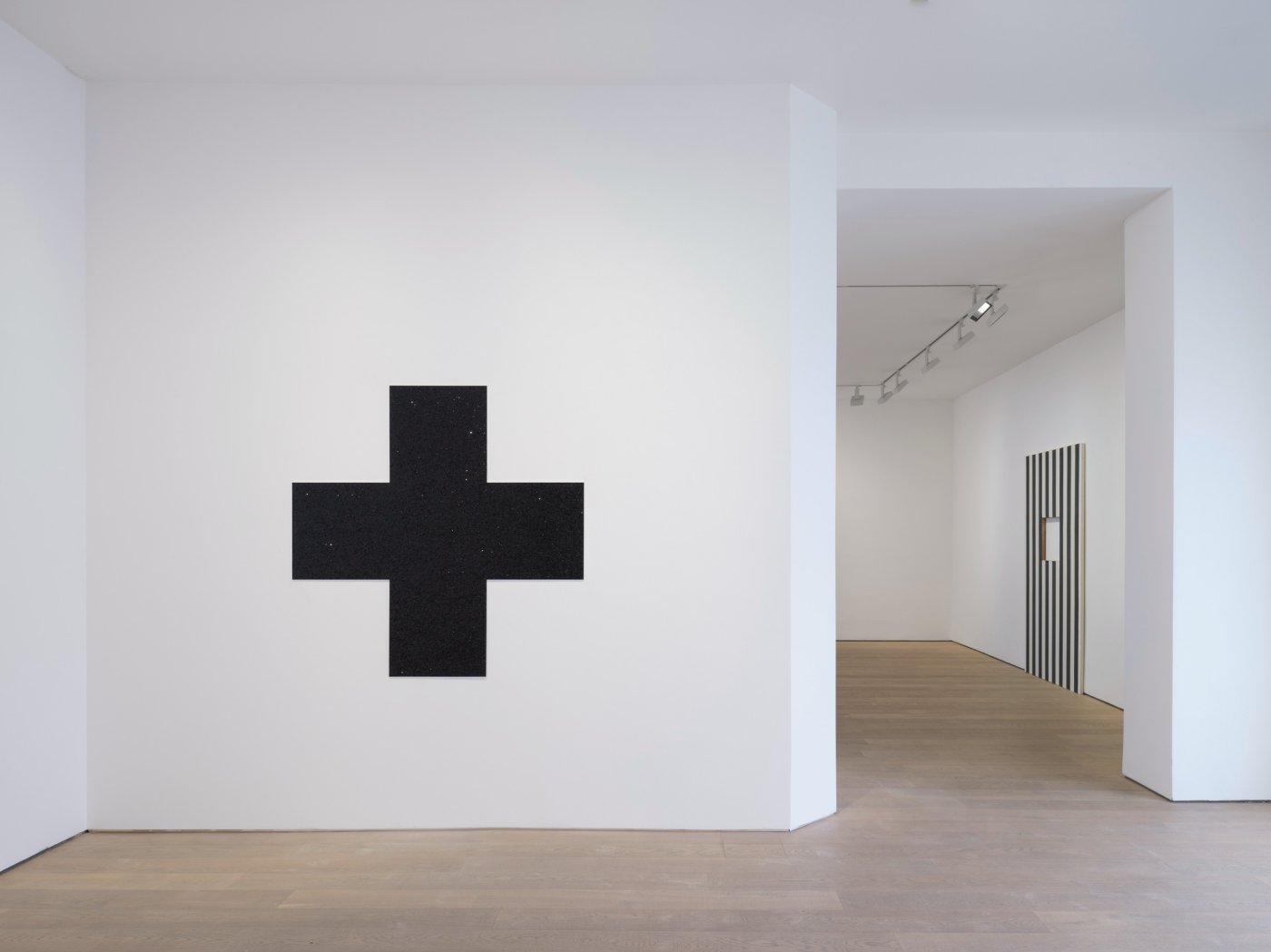 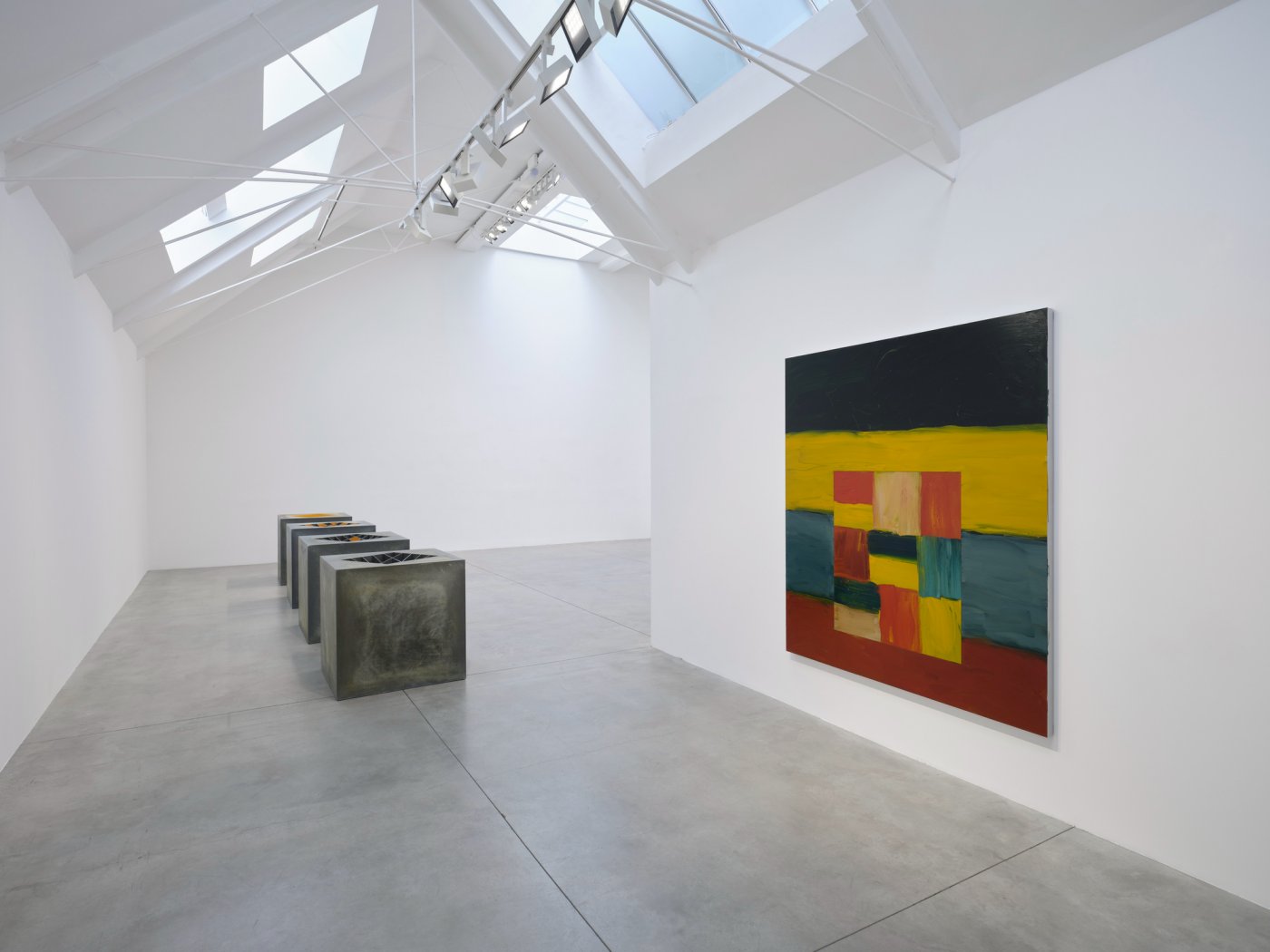 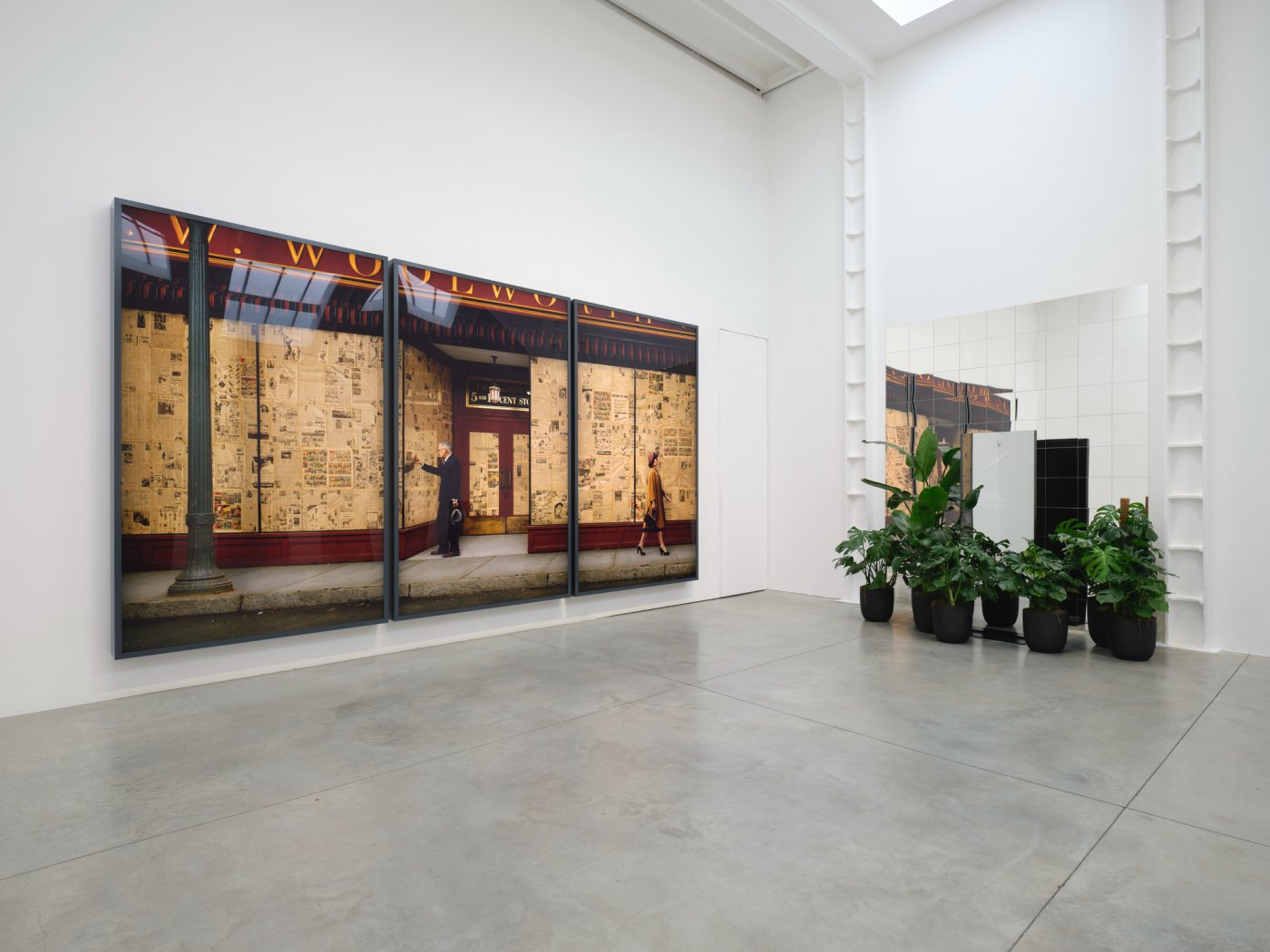 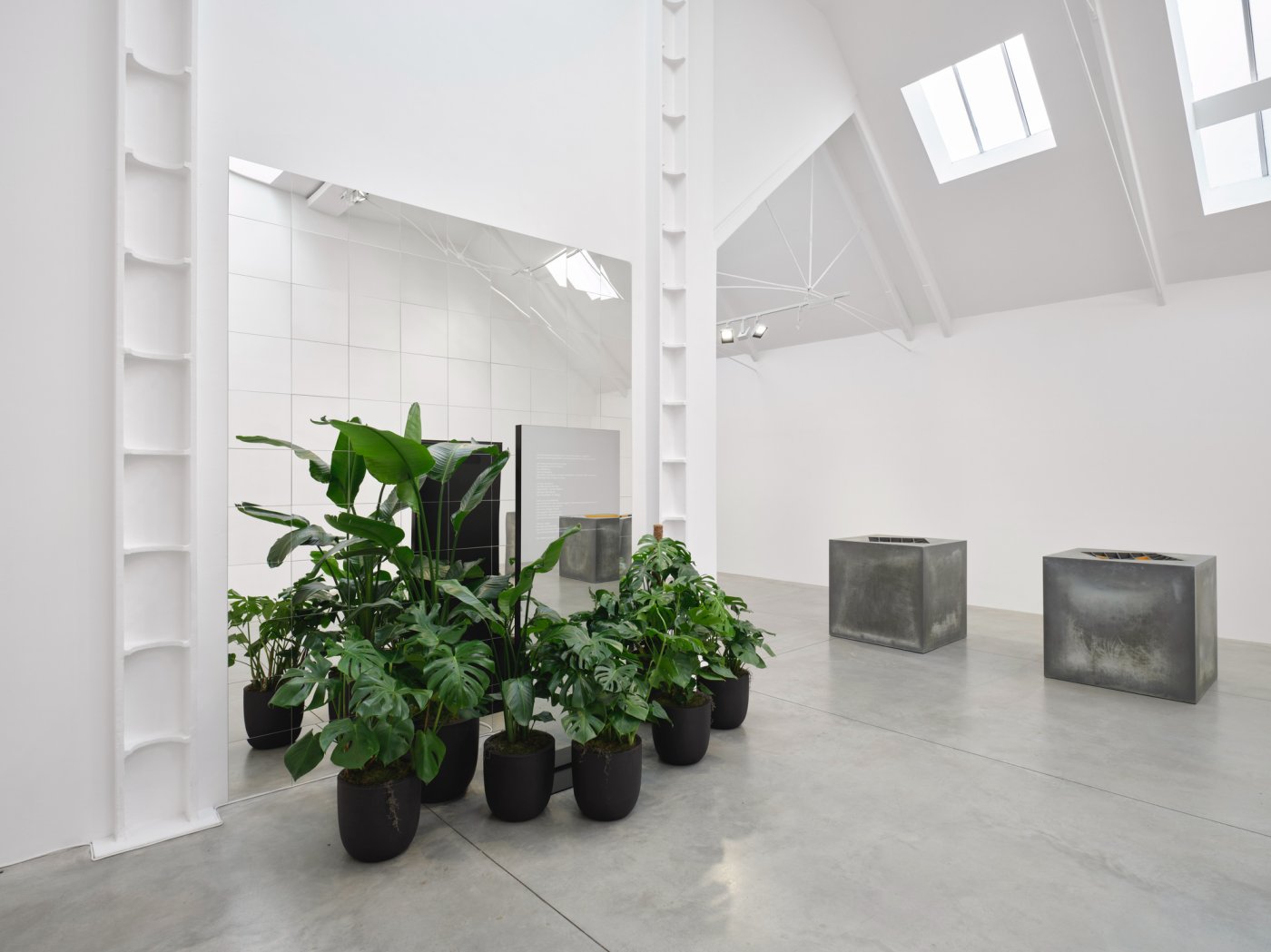 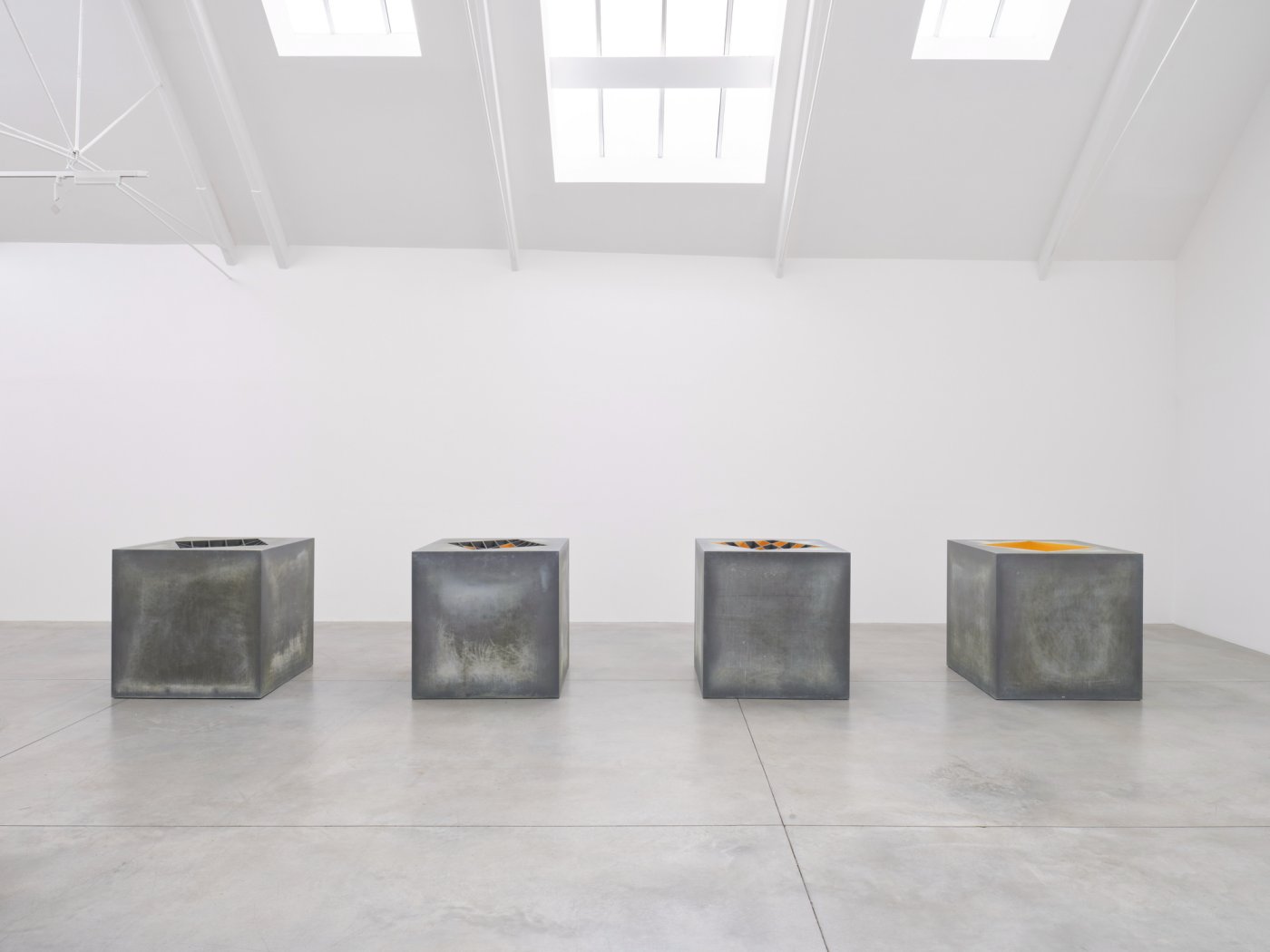 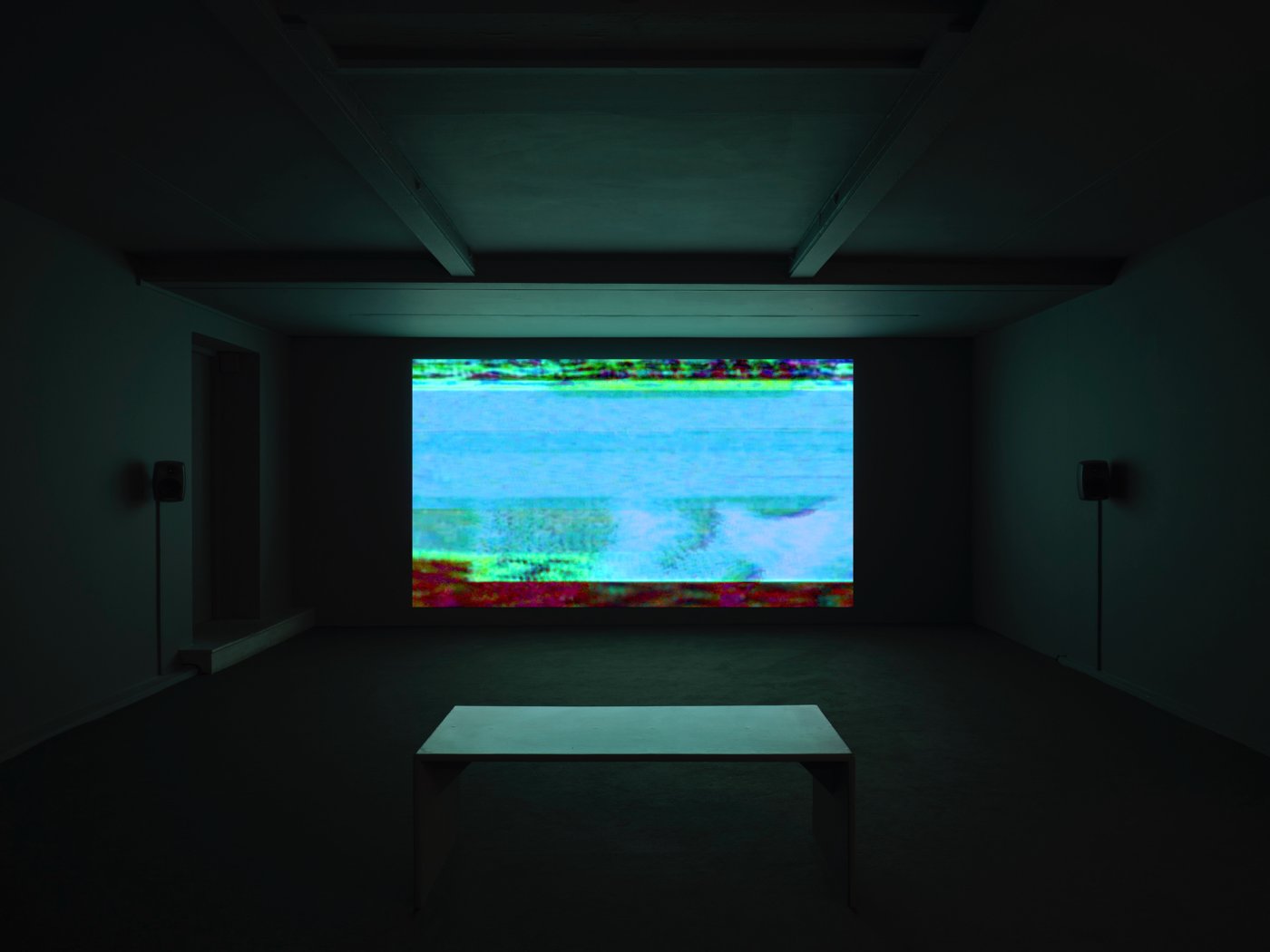 One entrance point to the show is Sean Scully’s new painting, Wall Landline Chrome (2021), in which an imposing, striped aluminium panel is interrupted by a cut-out section of intervening passages of paint, containing multiple doors within doors. Scully first photographed the weathered gates and corrugated frontages of abandoned shacks on the Scottish Hebridean islands in the 1990s, before painting his own echoes of them and exploring the act of opening windows through and beyond the confines of the painterly support. Daniel Buren, who coincidentally worked on a painted environment with Scully in New York in 1979, here punctures his own striped door with a rectangular void, creating a peep-hole through to a new vista, which he dubbed a Corridorscope, in relation to another site-specific, interactive installation of eye-level points du vue from 1983.

Artistic apertures not only represent fractions of the whole or indeterminate possibilities, as in Antonio Calderara’s subtle, watercolour glimpsing of two far-off portals to elsewhere, they also represent how our lives are now increasingly restricted and mediated through the rectilinear boundaries of the screen or tablet. Cory Arcangel’s rainbow triptych (auto-rendered through the portal of Photoshop) and Ryan Gander’s storytelling infototem, with its babbling AI stream of consciousness, allow virtual vistas into a digital realm full of potential, albeit a brave new world constructed exclusively from ones and zeros. There are also analogue portals to infinity, as in Rodney Graham’s depiction of a bygone paper information age, seen in a cacophonous array of printed newspaper sheets and cartoons pasted across the windows of a store, in The Avid Reader 1949.

Framing the outside world is just as often a means of presenting the artist’s inner world. Anish Kapoor’s intensely blue mirage of the blurred boundaries between sea, sky and horizon evokes the experience and memory, if not the actual image, of being in a landscape. This duality is also seen in Peter Joseph’s extended, chance consideration of a blankly projected cinema screen in 1971, which gave way to a series of meditative, pastel-hued paintings that frame their shimmering interior light effects within darker borders, presenting a chromatic portal to the future.

The traditional, frontal encounter between spectator and object is dissolved by the transporting power of these portals to pull the viewer in and past the picture plane to places or states of mind within or behind their borders. Shirazeh Houshiary’s quartet of sculptures, Turning around the centre (1993) provide another gateway or moment of transition through the exhibition, appearing from afar to consist of four, forbidding lead-lined boxes, only to reveal their shimmering gold leaf interiors as one approaches. Those that succumb to the glowing portals hidden within each cube – seemingly drawing in the surrounding movement, light and energy, like vortices – are transported through these passages to the other side.

Downstairs, Susan Hiller’s Resounding (Infrared) of 2013 intersperses the noise and static of the Big Bang and the Van Allen radiation belt with human recollections of extra-terrestrial contact, suggesting that imagination and audiovisual stimuli, transmitted through the portal of the video screen, can be a valid means of interstellar travel, or at the very least advocate taking the path away from the norm. The never-ending expanses of the cosmos is further invoked by Mary Corse’s prismatic and crystalline squares of black acrylic, which give motion, depth and brilliance to her otherwise monochromatic, cruciform panel. Ever the radical thinker, John Latham’s twisted, performative Canvas Event of 1994-95 provides the final passage for the rebirth of the art object, reimagining the painted mark as the threshold between an infinitesimal gesture and the appreciation of the universe as contained within a grain of sand. These portals offer opportunities for new thought, beginnings and journeys, they just need to be opened and walked through.