Modern Art presents a solo exhibition of work by Pope.L entitled Notations, Holes and Humour. This is Pope.L’s first exhibition with Modern Art, and his first solo show in London in more than a decade. 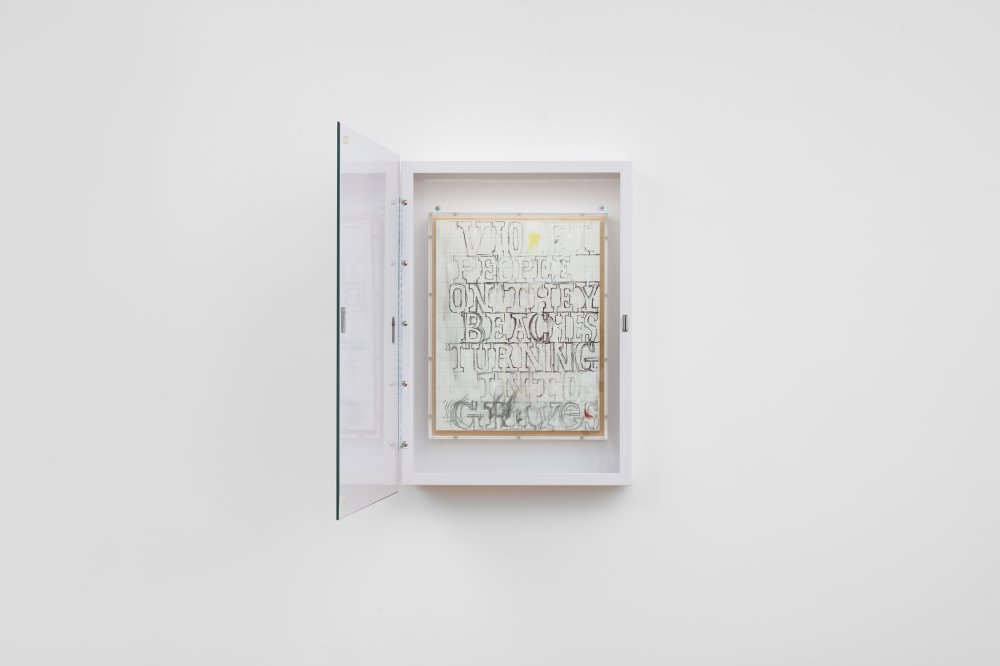 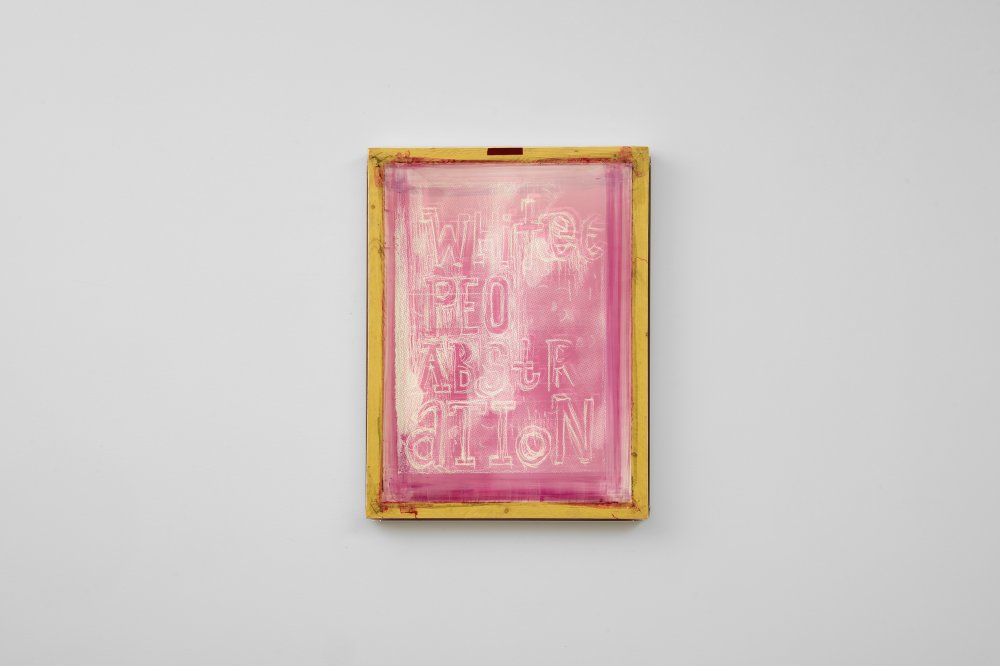 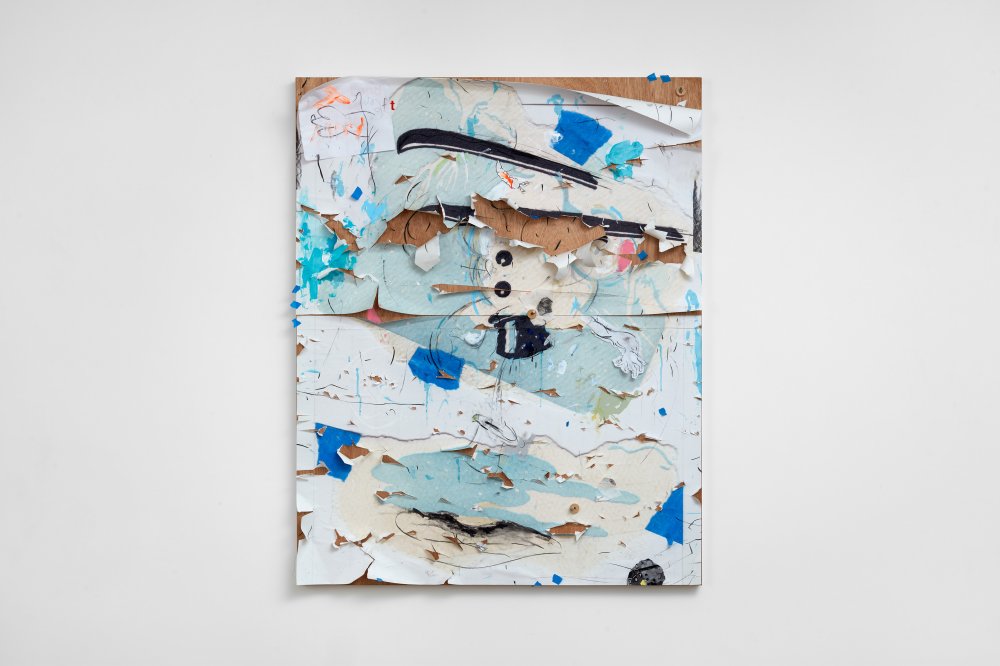 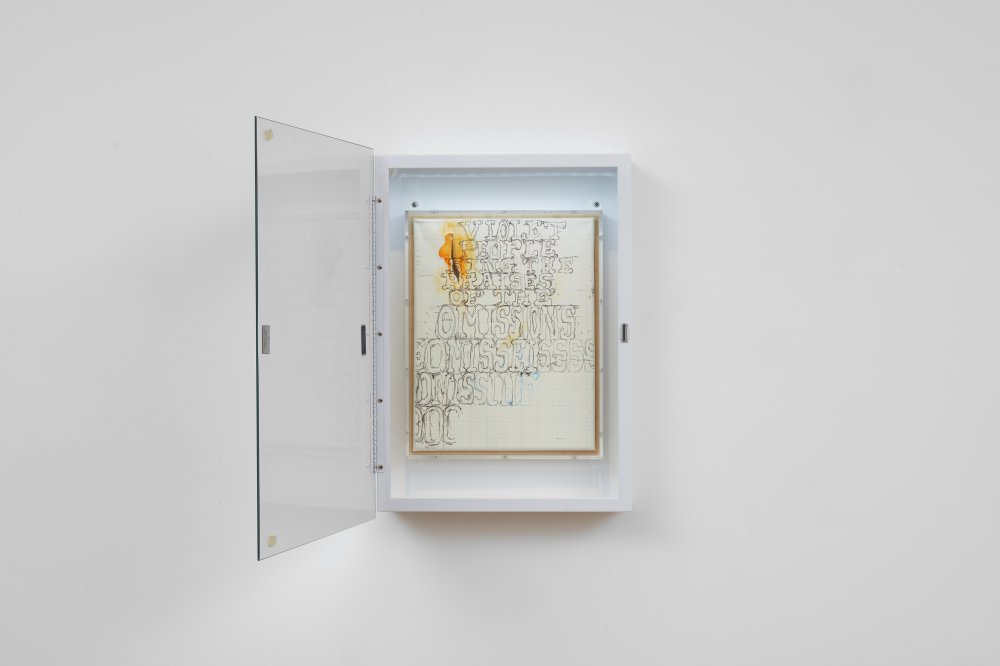 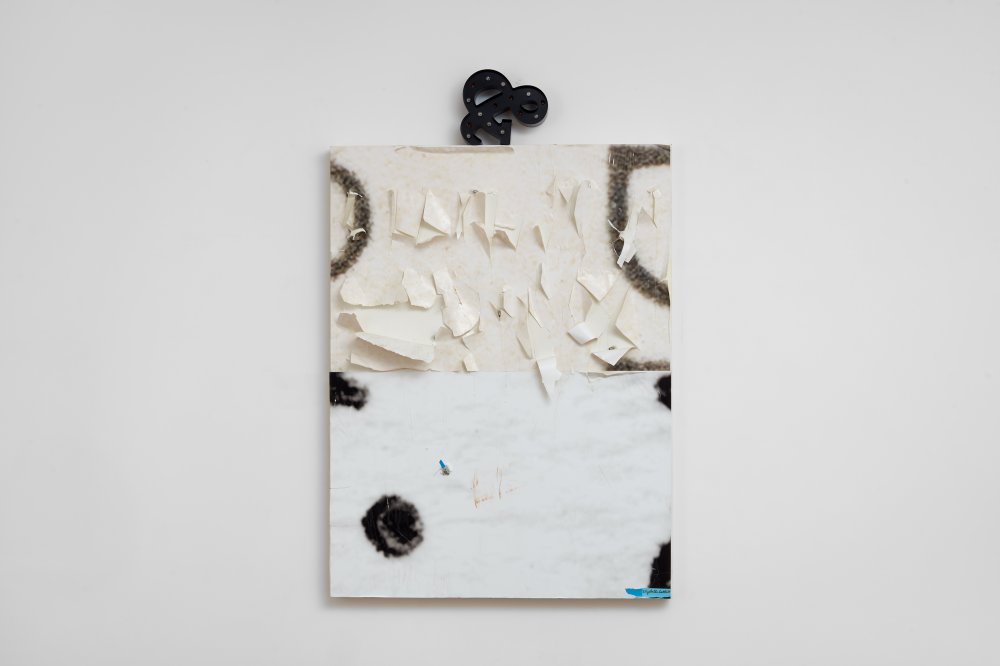 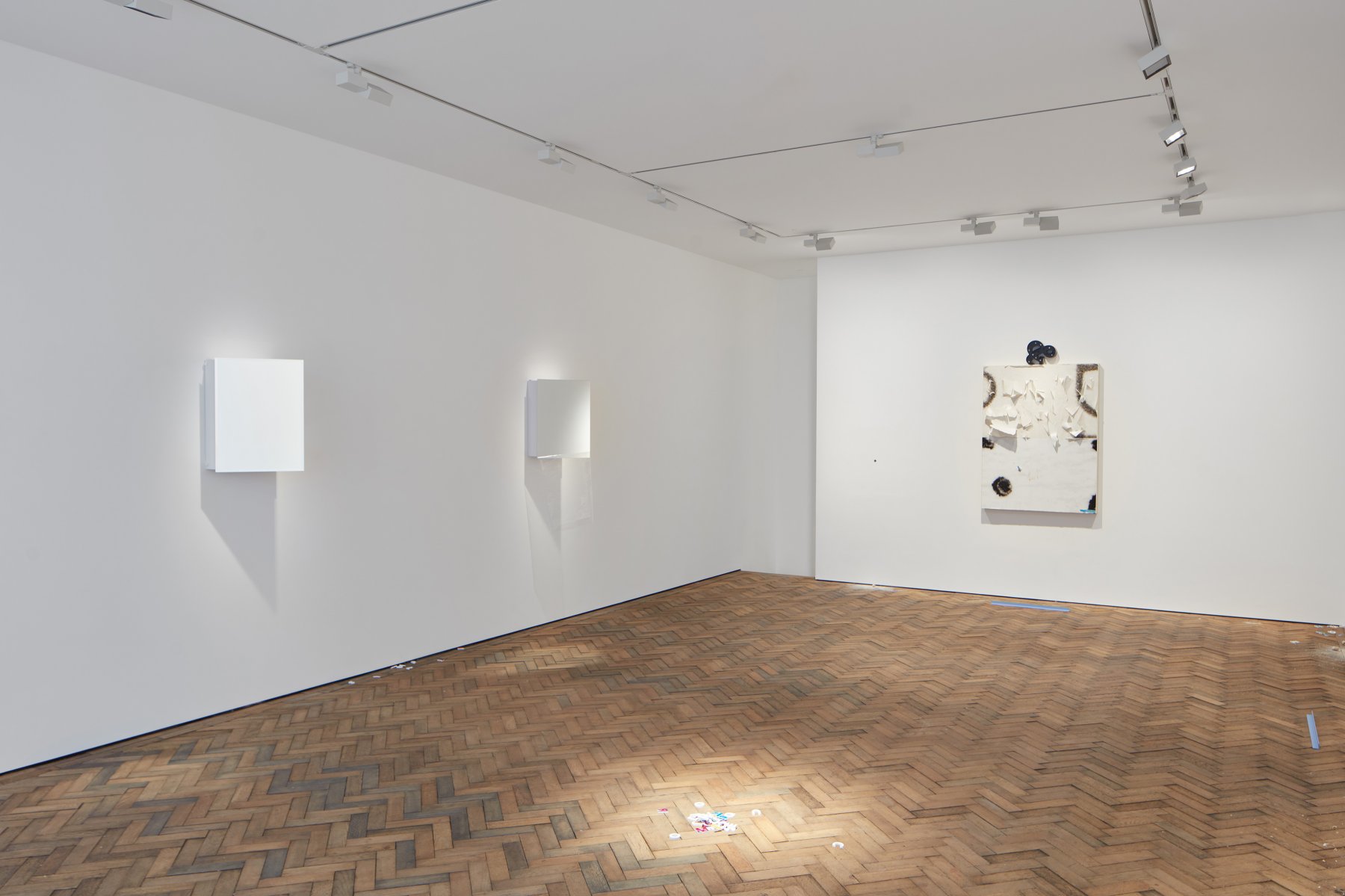 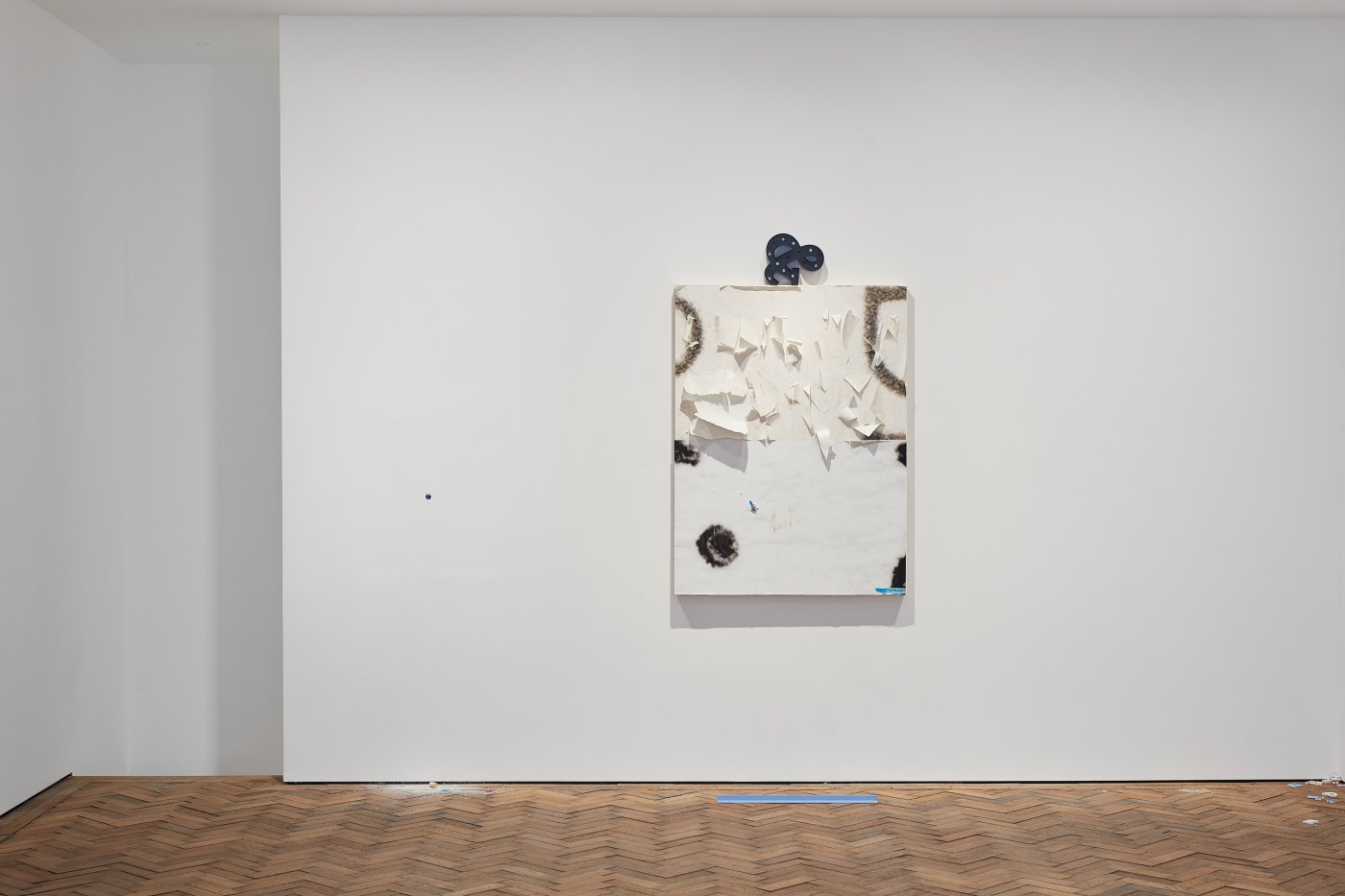 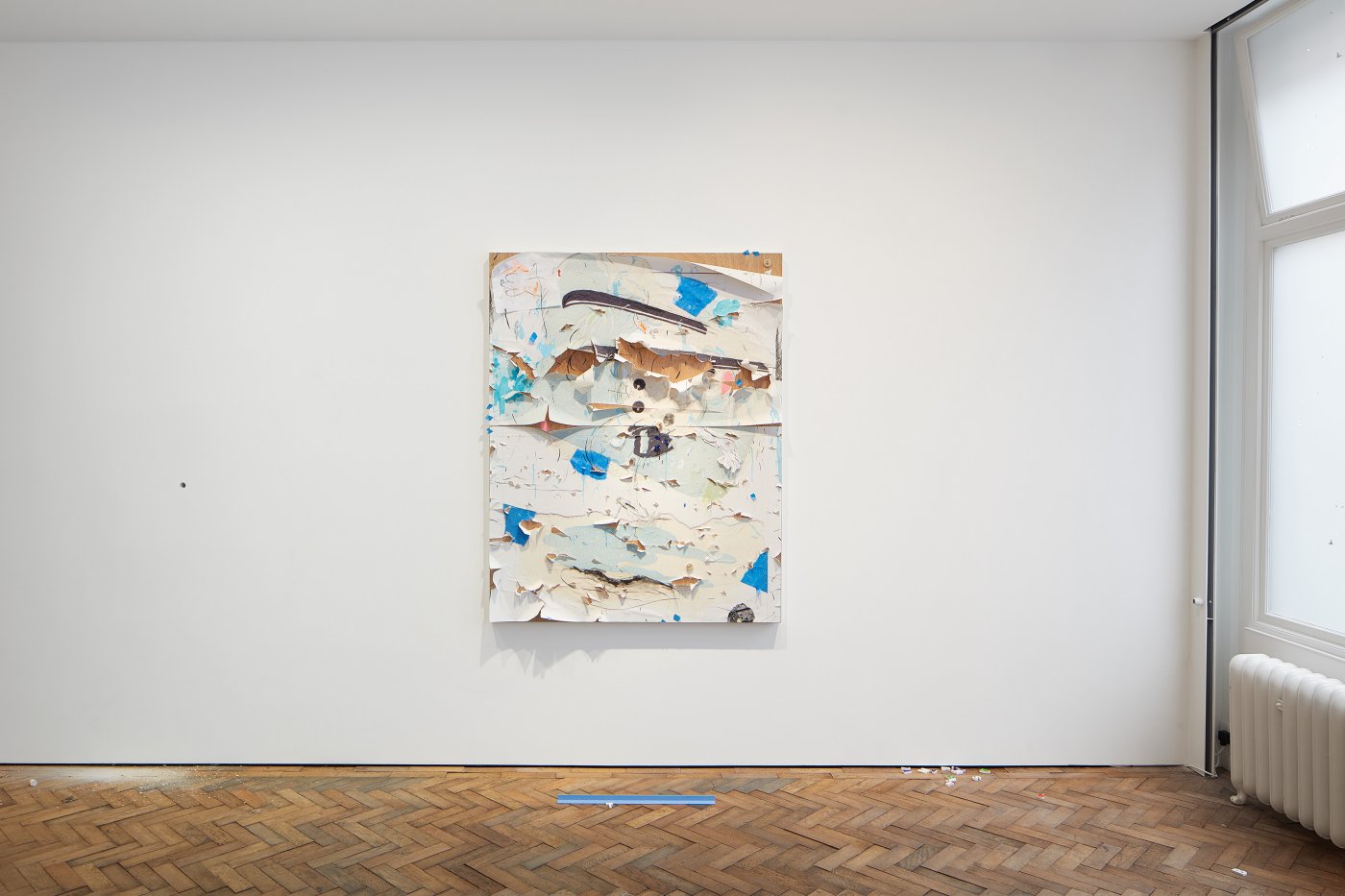 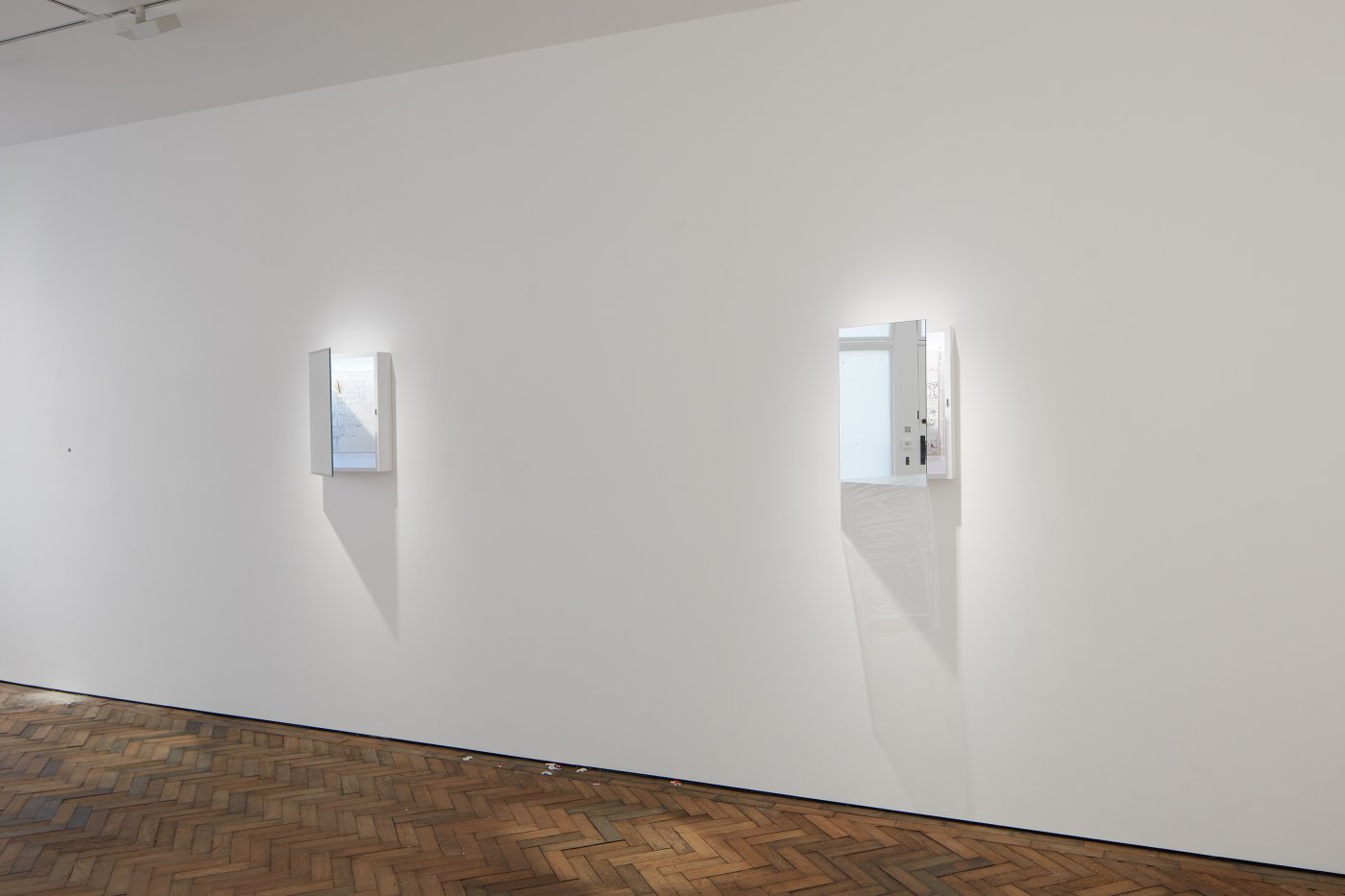 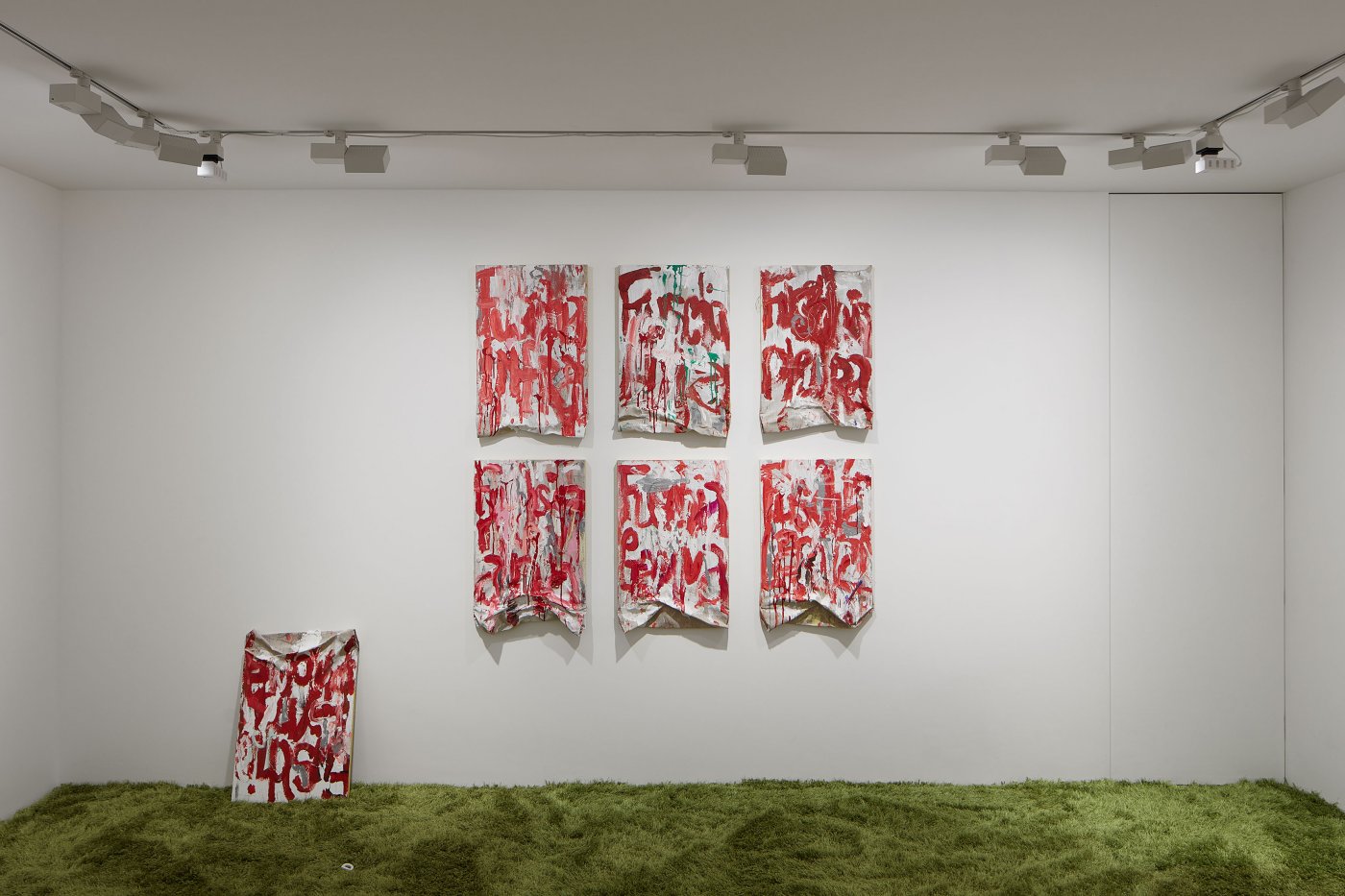 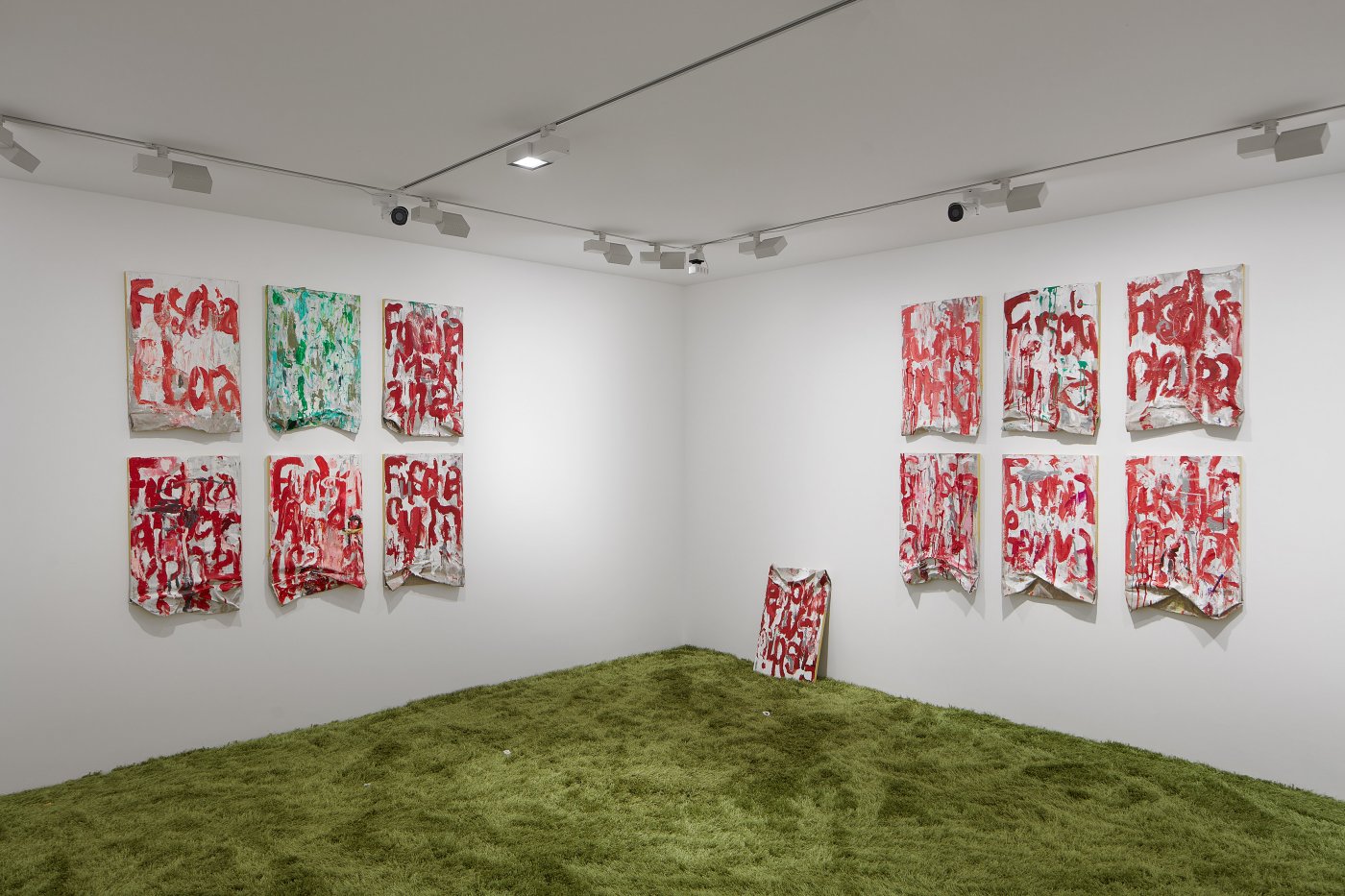 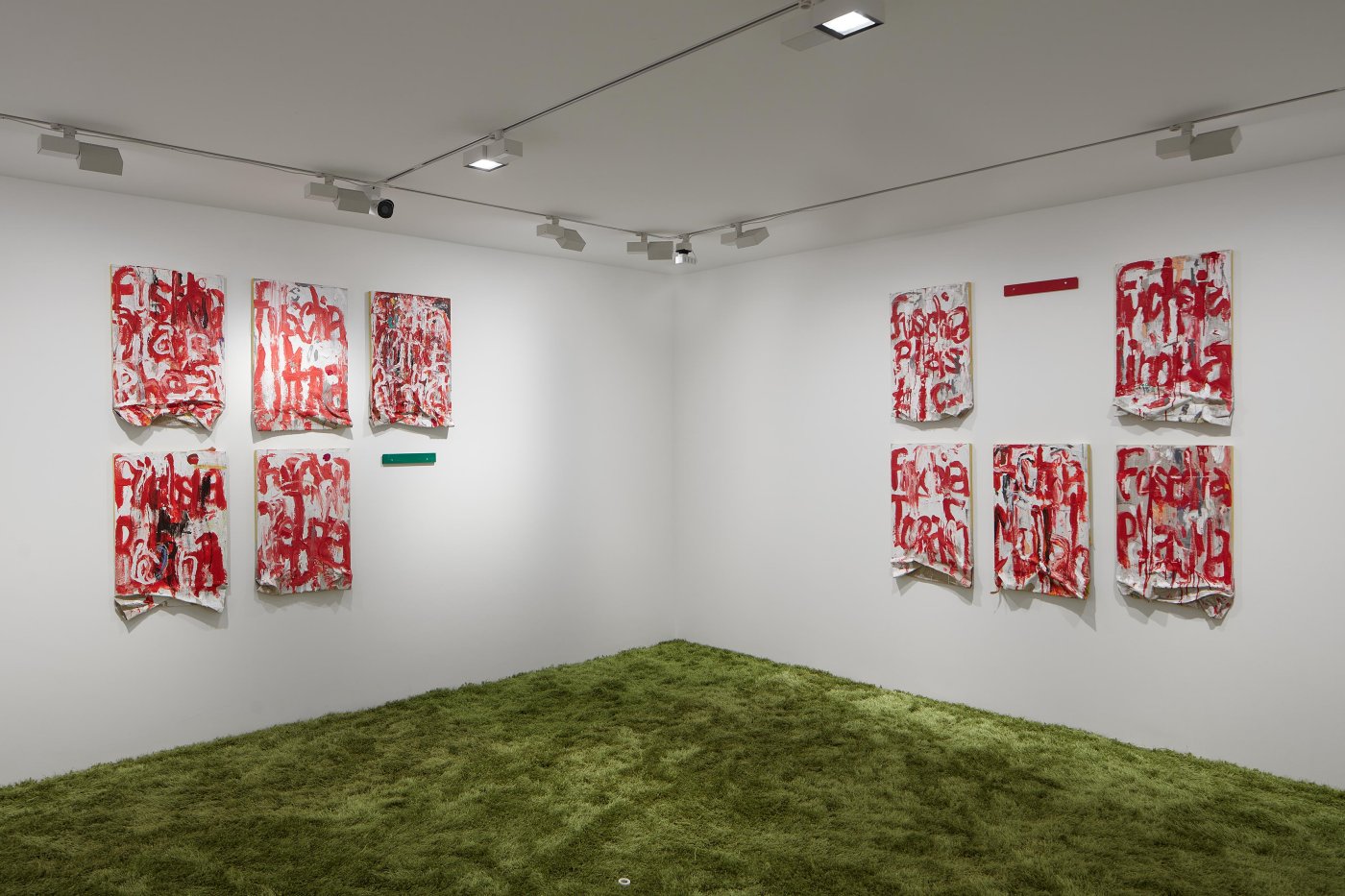 Pope.L’s exhibition with Modern Art centres on his ongoing project, Skin Set, a constantly growing and shifting group of text-inflected works across many media that consider the construction of language, identity and stereotype as notation, hole and frequently absurdity and humour. The show, installed on both floors of the gallery, contains video, silkscreen, assemblage, floor pieces and paintings made between 2015 and 2021. On view are several medicine cabinets originally shown at the University of Chicago’s Neubauer Collegium earlier this year. Each cabinet contains a plexiglass-encased painting illuminated by led light. The incongruity of the cabinets, their altar-like aspect and the frame-within-a-frame-within-a-frame mode create a curious preciousness that is called into question by the text inscribed on the paintings, such as ​‘Violet People Are Plusher.’ The medicine cabinet works share the walls with assemblages on panel, whose paper surfaces are scraped, inscribed, sliced, decorated and punctured creating the experience of painting as a page-space that is simultaneously coming together and coming apart. Despite medicine cabinet ​‘caves’, punctured surfaces, altar-light, bits of letters pushed to the margins of the canvas, the usage of text is insistently present in these works. Circa (2015) is a group of twenty-four oil on linen paintings, each containing the word ​‘fuchsia,’ which is usually misspelled, painted in bright pink and paired with another word with which it rhymes, such as: abracadabra, diarrhoea, or bwana, among others. Here, legibility is undercut by scratches, crumples, gouges and smudges staging a space of writing not just as an act of communication but also one of visual glossolalia, a space somewhere between physical colour, the actual colour of a word, the word itself, the word used to describe the word and something different altogether. Visitors might notice that one of the 24 paintings has yet to be hung on its cleat. The eminent painting will change throughout the run of the show at the behest of the artist.

Installation as architectural intervention also plays a part in the artist’s interpolation of his three key themes: notations, holes and humour. For example, the exhibition begins outside as the viewer first encounters a frosted window installation that almost completely conceals the gallery’s interior. Once inside the gallery, holes abound. For instance, several have been poked into the gallery’s walls giving access to moving images of a world inside the walls themselves, one of which is a live-feed of the lower floor gallery. Pope.L has said: ​“Every artwork is a notation, therefore a fragment therefore lack is built into it from the get-go whether that be conceptually, materially, politically or just by dint of identity itself — a thing can never be completely congruent with itself. There is always a shadow of something other betwixt and between. This exhibition, its works and its interventions, represent portals, blockages, gaps and resistances. Sometimes a work is a portal, sometimes a resistance, usually both.”

During his career spanning more than 40 years, Pope.L has worked across many mediums and disciplines to think about relations and power disparities in language, gender, race, community and the environment. As both an artist and an educator, he has become one of the most renowned and influential figures working within his field. Pope.L’s earliest performances in public spaces brought together influences from absurdist theatre, Fluxus, and conceptual art in such works as Eating the Wall Street Journal (1991) in which he chewed and spat out pages of The Journal with milk and ketchup, while sitting atop a toilet-cum-throne. His early street performances were also the beginnings of what became his decades-long crawl works, which involved crawling long, exhausting routes across city streets, often dressed in formal attire. This iconic series has continued to be performed in various iterations, sometimes by Pope.L himself and other times with large groups of performers. The body politics activated by this work are present in various forms throughout Pope.L’s oeuvre. Other notable works include his Flint Water Project (2017), for which he bought 150 gallons of tap water from the city of Flint during the public health disaster that caused large numbers of the majority Black population of Flint to become sick from its contaminated water. Pope.L rebottled this water and sold it as limited editions with the revenue donated to relief efforts in Flint and Detroit. The political backdrop of this project carried over into Pope.L’s more recent Choir (2019), a three-part work that brought together threads from his Flint water project with references to public drinking utilities used within the era of Jim Crow segregation.

Pope.L was born in 1955 in Newark, nj. He lives and works in Chicago, il. Pope.L began to work as an artist in the 1970s, studying at Pratt Institute and Montclair State College, where he gained a ba in 1978. He was a participant of the Whitney Museum of American Art’s Independent Study Program in New York in the late 1970s, and received his mfa from Rutgers University in 1981. Since the 1980s, he has exhibited extensively both in the United States and internationally. Pope.L’s early performances took place in public spaces, mostly on or adjacent to the street. He then began to exhibit in venues such as Anthology Film Archives in New York; the 2002 Whitney Biennial; Franklin Furnace in New York, among others. Since then, his work has been shown in exhibitions and performances at such institutions as Museum of Modern Art, New York; New Museum, New York; The Sculpture Center, New York; Walker Art Center, Minneapolis; Museum of Contemporary Art Chicago; cam, Houston; Studio Museum Harlem, New York; Renaissance Society at the University of Chicago; Artists Space, New York; the 32nd Biennal de São Paulo; Artspace, Sydney, among many others. In 2019, a trio of complementary exhibitions of the artist’s work were held in New York organised by the Museum of Modern Art, the Whitney Museum of American Art and Public Art Fund.