Poetry in Motion. Ceramics by Jean Lurçat and Paintings by Georges Bernède

Poetry in Motion. Ceramics by Jean Lurçat and Paintings by Georges Bernède

Whitford Fine Art presents for the third time an exhibition of French artists Jean Lurçat and Georges Bernède. Bringing together two artists from different generations, traditions, and backgrounds, the exhibition shows their common ground of the universal themes of freedom, movement and poetry. 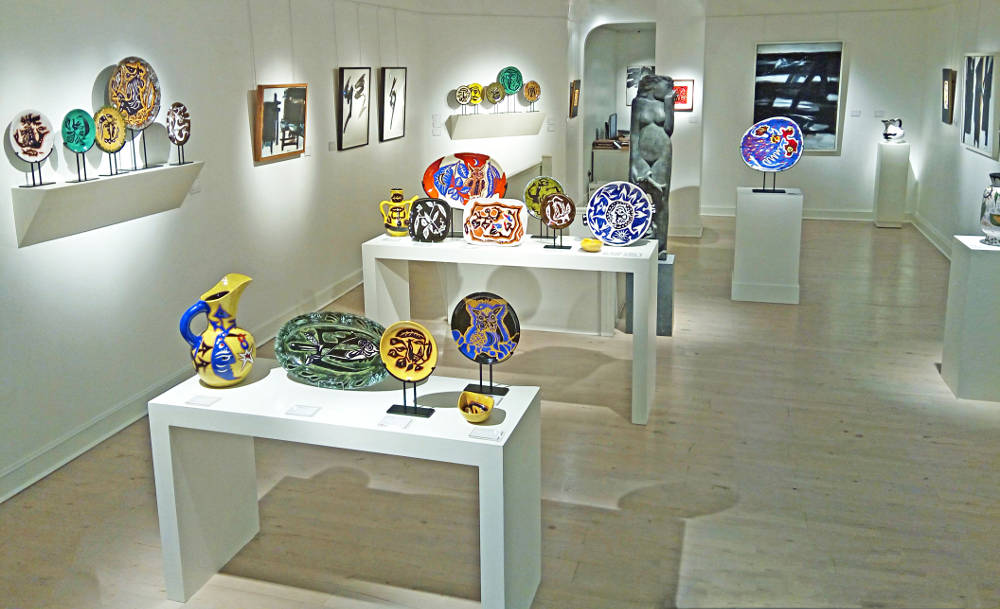 An important and successful painter of the School of Paris, Jean Lurçat singlehandedly revived tapestry-making as an art form during the 1930s. Lurçat’s artistic eye simultaneously wandered towards a multitude of other media, including engraving, book illustrations and – most notably – ceramics. During the 1950’s Lurçat worked away abundantly at the ceramic workshops of Sant-Vicens in the Southern French city of Perpignan.

Imaginary and mythological sea and wood creatures and foliage are winding their ways in thickly applied saturated colours overlaid with brilliant glaze. These designs demonstrate Lurçat’s fondness of the symbolic and poetry which formed the core of his artistic expression. Thus a plate, a bowl, a jug or a tile, becomes an object of beauty and exquisiteness. Lurçat’s poetry is ultimately derived from the excellence of the Art Nouveau style.

Georges Bernède’s quest for poetry and beauty on the other hand was achieved through his own human struggle. The son of a local carpenter in the bastide of Monsegur, near Bordeaux, Bernède was mocked for wanting to become a painter. Bordeaux is notoriously known for its conservatism and its painters did not warm to Abstraction until the mid-1950s, twenty years after Abstraction became a recognized movement in Paris.

Bernède painted in solitude and his work was rarely shown. Consequently he did not suffer any pressure to conform to any commercial demand or intellectual expectations and had the chance to explore art freely. In his continuous search to express the poetry of Life, Bernède tried to establish an analogy to musical rhythm in his painting and thus naturally grew to gestural painting, partnered with a monochrome palette. Whilst being deceptively subtle, Bernède’s paintings show dramatic movement and impact through the energetic application of the paint.

Whilst both artists were born to the same artistic spirit in France during the first half of the twentieth century, the difference in their artistic outputs offers a dynamic juxtaposition of vibrant colours and monochromatic intensity, dream-like figuration and virile abstraction.