Exhibition curated by Francesca Pola
In collaboration with the Archivio Pietro Consagra, Milan

Robilant + Voena presents the first solo exhibition of the Italian sculptor Pietro Consagra in London. The show highlights the work of Consagra from 1947 to 1967: the first two crucial creative decades of his activity, which saw his affirmation as one of the pioneers in the renewal of international modern sculpture. This exhibition is realized in collaboration with the Archivio Pietro Consagra and curated by Francesca Pola. 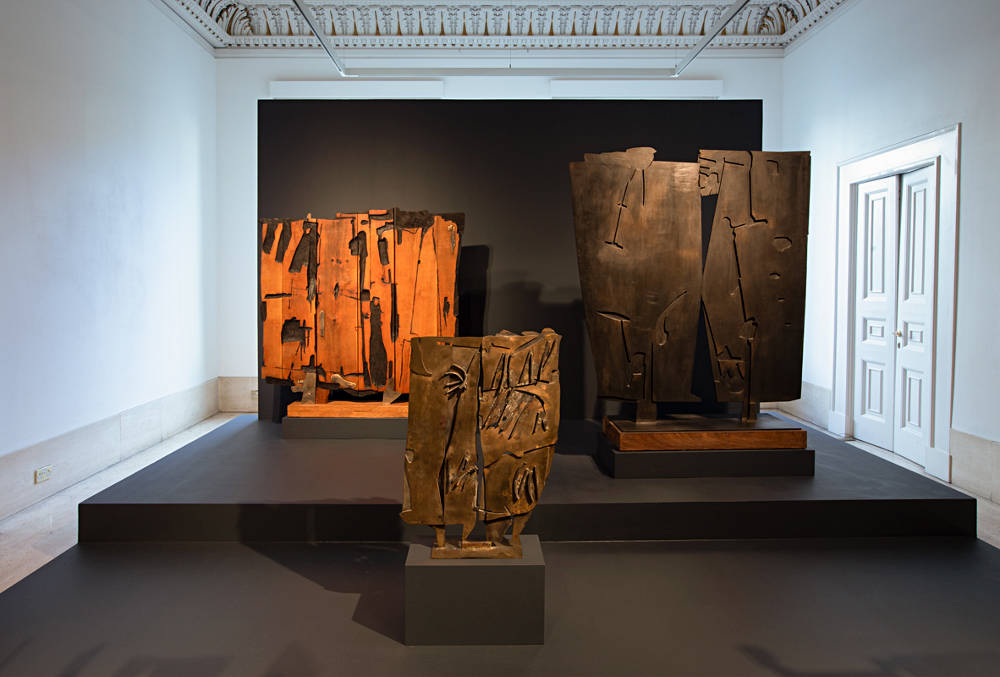 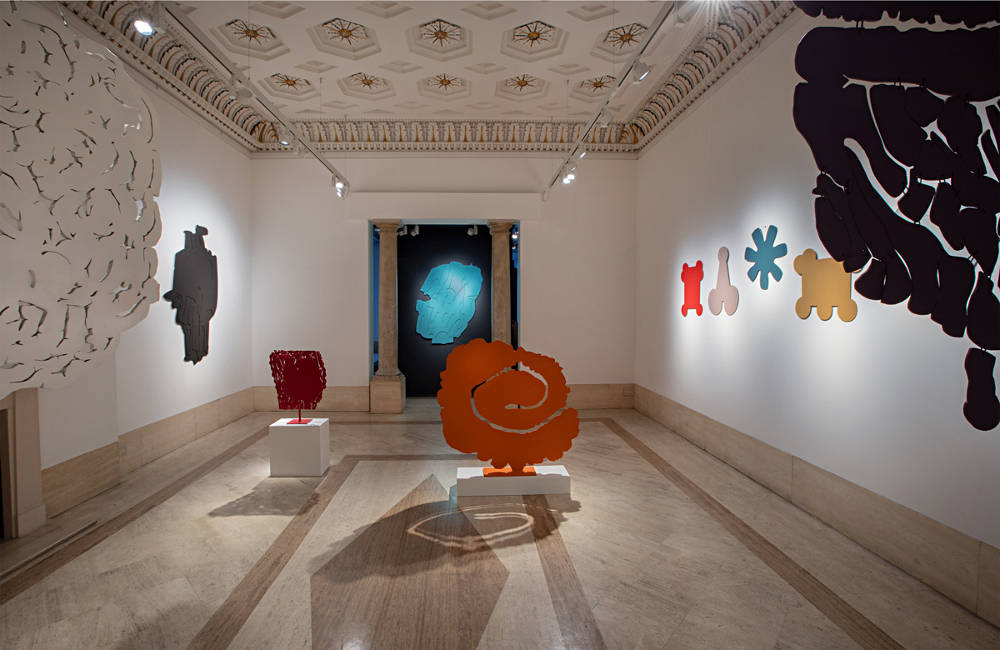 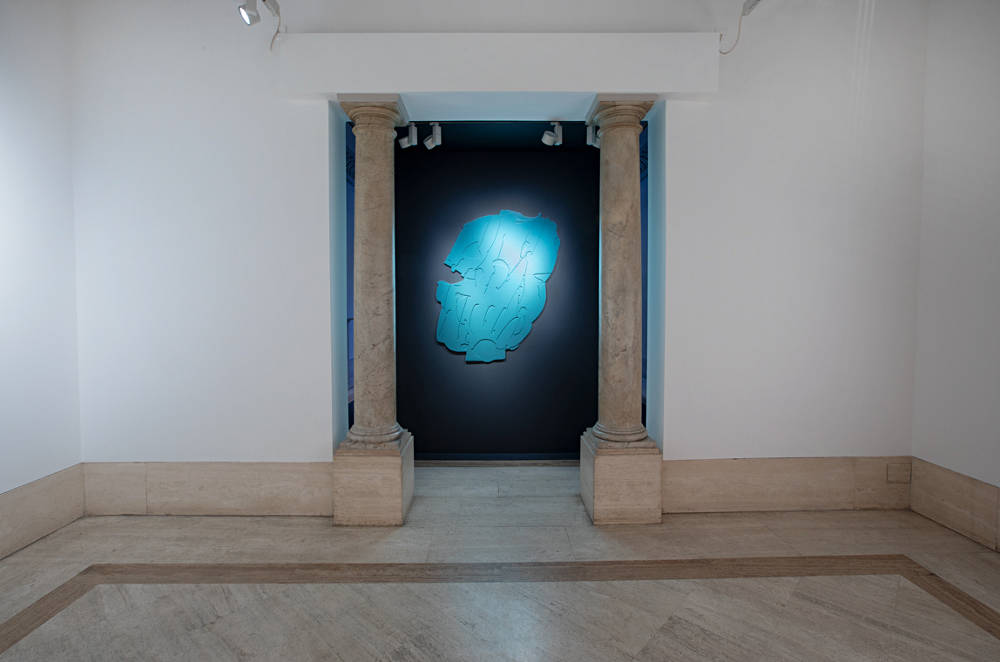 Curated by Francesca Pola, the show highlights the work of Consagra from 1947 to 1967: the first two crucial creative decades of his activity, which saw his affirmation as one of the pioneers in the renewal of international modern sculpture.

Consagra is one of Europe’s most renowned post-war sculptors. Born in Mazara del Vallo, Sicily, in 1944 he moved to Rome, the “open city” that was beginning its civic and material reconstruction a er the dramatic years of World War II. Thee artist developed his highly distinctive vision for a new sculpture after a formative visit to Paris in 1946, which marked the beginning of an active dialogue with the international avant-garde, he realized his first abstract sculptures: they were not modelled as a whole, but instead constructed of silhouetted forms built of overlapping planes.

In his revolutionary invention of “scultura frontale” (frontal sculpture), first theorized in 1952, Consagra realized almost two-dimensional, thin works that in their “frontal” placing rejected the tradition of three-dimensional and monumental sculpture, in order to develop a more direct and free interaction between art, audience and environment. In creating “frontal” pieces to be experienced by a single point of view, as an antidote to the rhetoric and authoritarianism of conventional and monumental artistic sculpture, he wanted to integrate the plastic object and its surroundings into a completely new vision of space. Working in a variety of different materials, including bronze, iron, burnt wood, marble, and steel, he developed a continuous reflection about sculpture in relation to other disciplines, such as architecture and urbanism.

The exhibition brings together pivotal examples of Consagra’s work in redefining the coordinates of modern sculpture: from his early “totemic” pieces from the late 1940s (one of which was acquired by Peggy Guggenheim in 1949) into his most well-known “colloqui” (colloquies) from the 1950s, the key cycle in the development of his frontal sculpture, which granted him the Grand Prize for sculpture at the Venice Biennale in 1960. A room is to be devoted to his bi-frontal coloured iron and aluminium works from the 1960s, which he presented in crucial solo exhibitions at Marlborough Gallery in Rome (1966) and Marlborough-Gerson Gallery in New York (1967): “ferri trasparenti” (transparent iron works), also presented at the Solomon R. Guggenheim Museum in 1967, “piani sospesi” (suspended planes), “piani appesi” (hanging planes), “giardini” (gardens), “inventario” (inventory).

This selection of works, including some rarely exhibited pieces, will be the core of the exhibition, flanked by a special presentation of his “paracarri” (bollards) marble edition (1974), where Consagra highlighted and reinterpreted a characteristic urban presences in Italian cities, the bollard, into a variety of shapes and colours: they will be presented together with his original photographs from Welcome to Italy publication, which is also being republished on the occasion of the London exhibition.

The exhibition will be accompanied by a 260 page monograph published by Marsilio Editore, Pietro Consagra. Frontal Sculpture, written and edited by Francesca Pola and including an essay by Luca Massimo Barbero, curator of the catalogue raisonnée of the artist’s sculptures (currently in preparation). Based on extensive studies of Consagra’s work, it is intended to be a complete overview of his artistic path from 1947 to 1982, with over 190 images of sculptures, historical photos and documents, it will include a selection of artist’s writings from the period and an iconographic mapping of selected works in museums around the world.

Pietro Consagra (1920-2005) is a crucial figure in post-war and contemporary sculpture. He quickly garnered international acclaim during his lifetime, between Europe, USA and Japan. He exhibited at his first Venice Biennale in 1950 and participated ten more times, winning the Grand Prize for sculpture in 1960. He received a prize at the Biennal in Sao Paolo in 1955, an honourable mention of the Carnegie Institute in 1958, the Prix de la Critique in Brussels in 1959. In 1967 he spent a year in Minneapolis, where he also created large scale sculptures, and exhibited at the Marlborough Gerson Gallery in New York. In 2001, he was awarded the Golden Medal for Art and Culture from the President of the Italian Republic. He has realized urban scale sculptures extensively, such as the one at the European Parliament in Strasbourg.

As early as 1953, Tate acquired Consagra’s Prigioniero politico ignoto (The Unknown Political Prisoner), his first sculpture to enter a museum in the UK. Consagra was one of the first Italian contemporary artists to have his work in the collections of e Art Institute of Chicago and of the Hirshhorn Museum and Sculpture Garden, Washington D.C. He was the first contemporary artist to exhibit at the Hermitage in St. Petersburg. His sculptures are in the permanent collections of: Museum of Modern Art, New York; National Gallery, Washington; Solomon R. Guggenheim Museum, New York; Peggy Guggenheim Collection, Venice; Centre Georges Pompidou, Paris; Museo Nacional Centro de Arte Reina Sofia, Madrid; Galleria Nazionale d’Arte Moderna, Rome; Pinacoteca di Brera, Milan
(among others).

Courtesy of the artist and Robilant + Voena