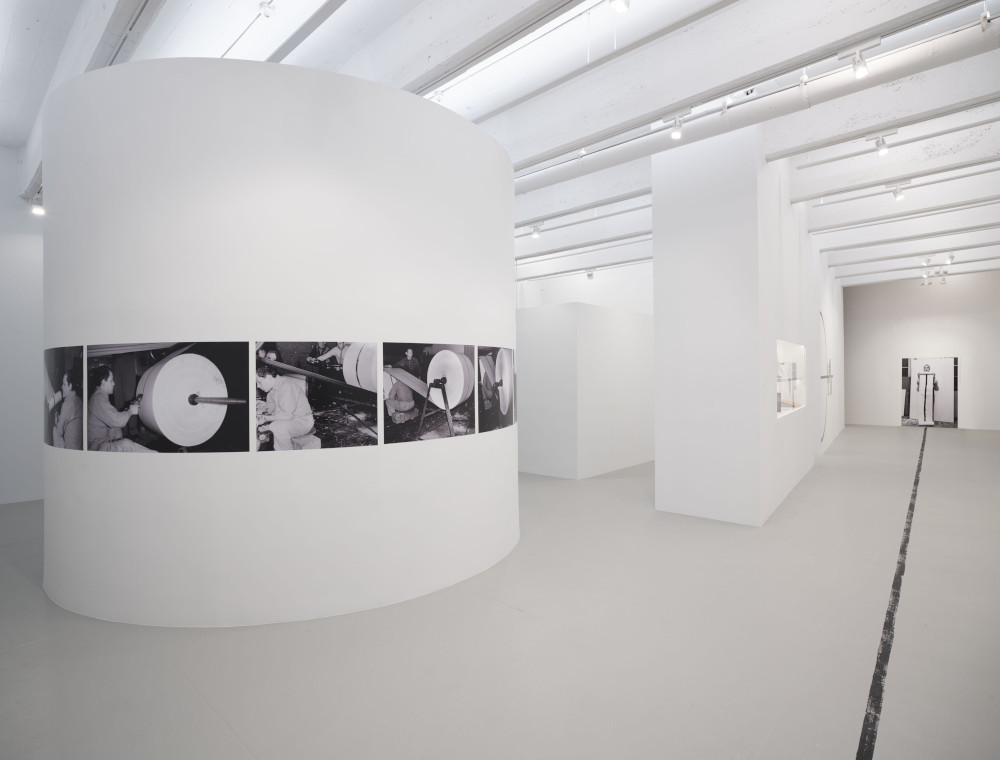 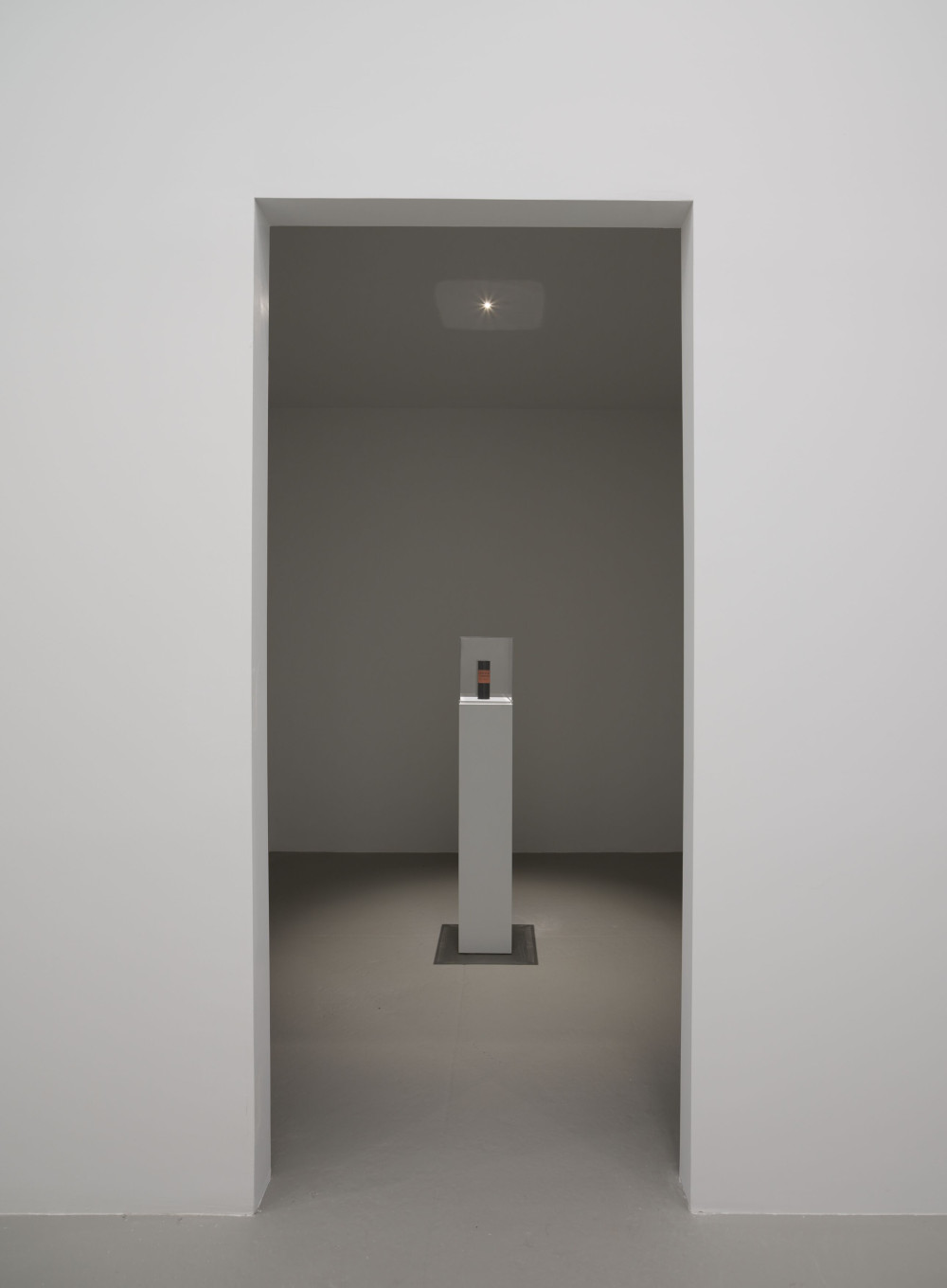 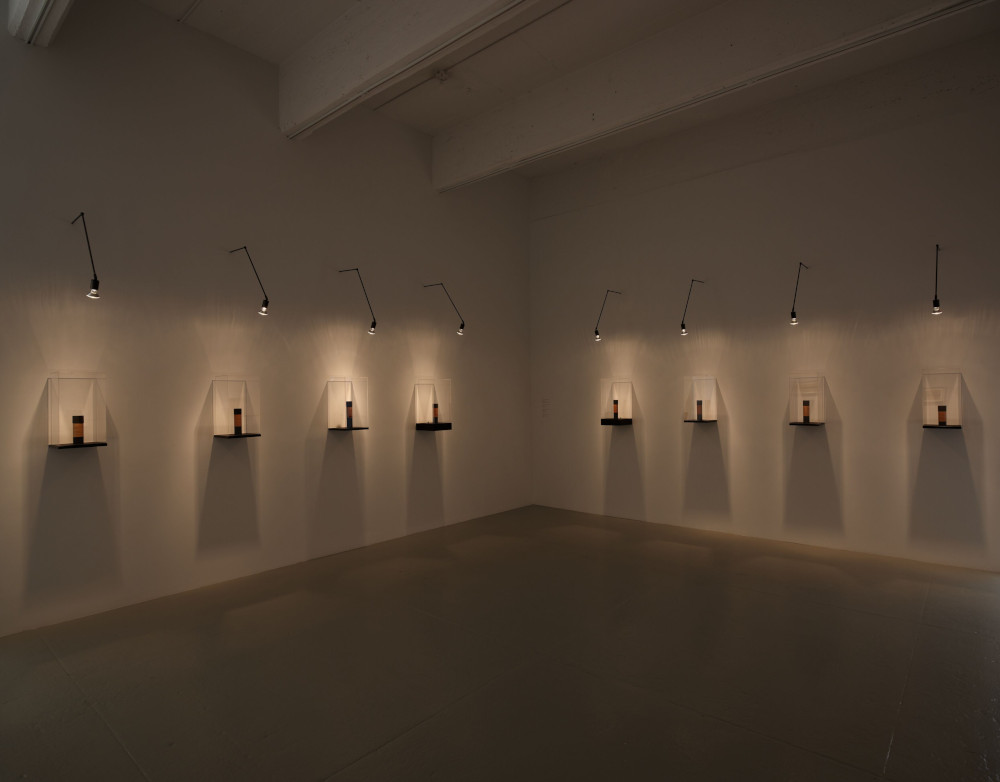 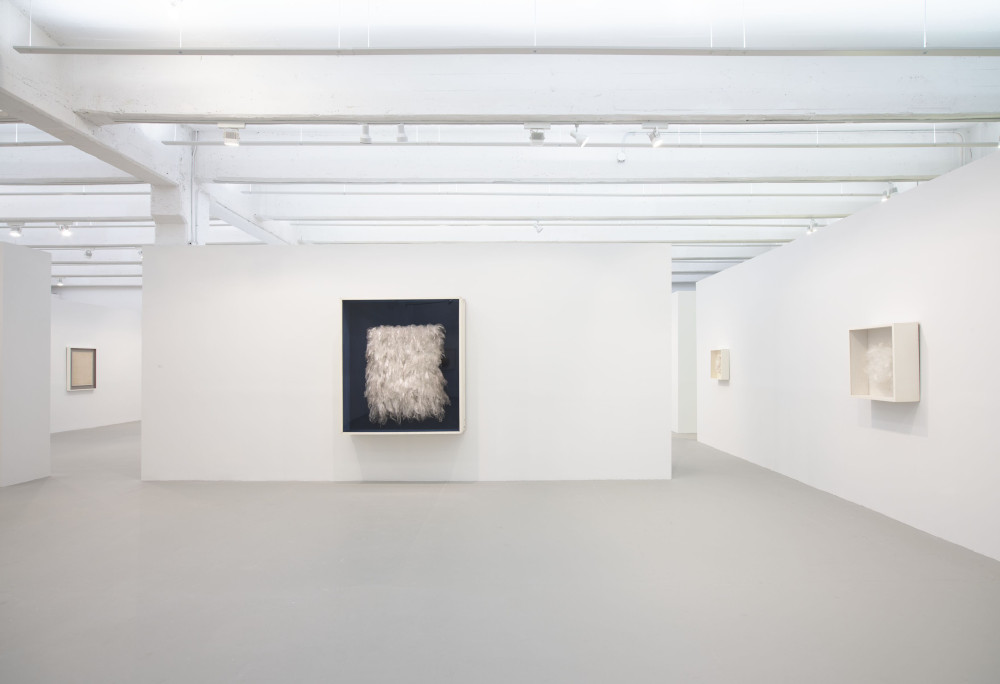 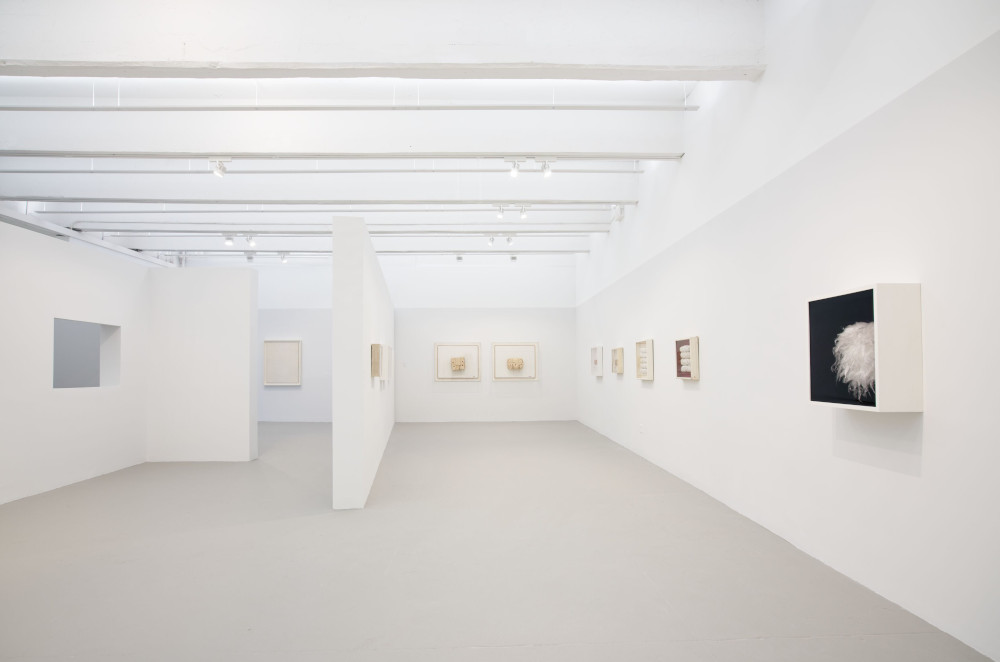 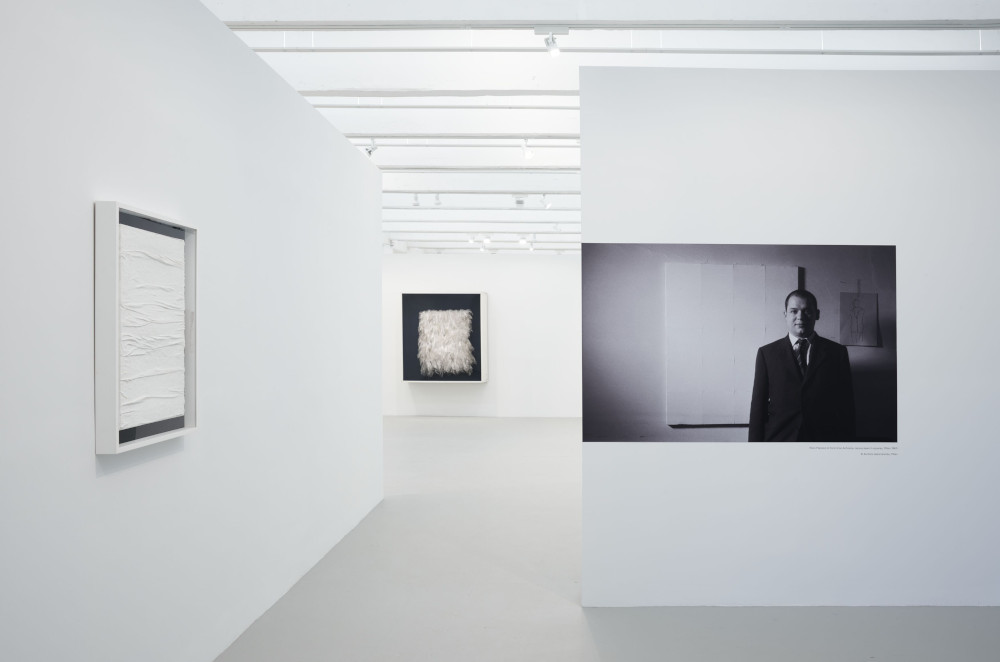 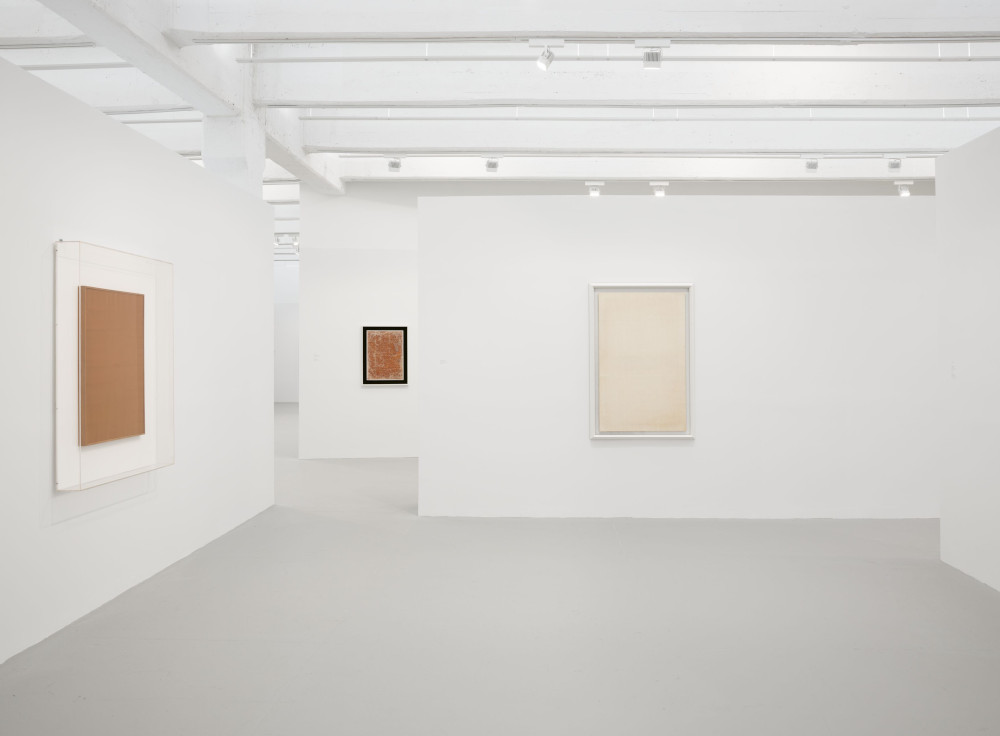 During a brief but influential career that ended upon his untimely death in 1963, Manzoni evolved from a self-taught abstract painter into an artistic disruptor. Curated by Rosalia Pasqualino di Marineo, director of the Piero Manzoni Foundation in Milan, the exhibitions ‘Piero Manzoni. Materials of His Time’ and ‘Piero Manzoni. Lines’ unfold over two floors and focus on Manzoni’s most significant bodies of work: his Achromes (paintings without color) and Linee (Lines) series.

On view in the second-floor gallery, ‘Materials of His Time’ features more than 70 of Manzoni’s radical Achromes and surveys the artist’s revolutionary approach to unconventional materials, such as sewn cloth, cotton balls, fiberglass, bread rolls, synthetic and natural fur, straw, cobalt chloride, polystyrene, stones, and more. Travelling from Hauser & Wirth Los Angeles, the exhibition situates Manzoni as a peer of such artists as Lucio Fontana and Yves Klein, whose experiments continue to influence contemporary art-making today. ‘Materials of His Time’ also presents, for the first time in New York, the items on a wish list Manzoni outlined in a 1961 letter to his friend Henk Peeters: a room all in white fur, and another coated in fluorescent paint, totally immersing the visitor in white light.

The presentation of Manzoni’s work continues on the third floor with ‘Lines,’ an exhibition of over 35 works that constitute his most considered and serialized explorations. Developed in parallel with his production of Achromes, Manzoni began his Linee series in 1959. Ranging from short, simple bands traversing rectangular sheets of paper to increasingly long traces created with a roller on strips of paper, the artist produced a total of 90 Linee works of varying meters, which he then sealed in cylindrical containers. The series culminated in 1960 with ‘Linea lunga 7.200 metri’ (Line 7200 Meters Long), made in Herning, Denmark. In addition to Manzoni’s cylindrical wooden sculpture ‘Linea di lunghezza infinita’ (Line of Infinite Length) (1960), a purely conceptual work, Hauser & Wirth is pleased to feature ‘12 Linee,’ a reconstruction of the artist’s exhibition originally staged in 1959 for the opening of the illustrious Azimut gallery in Milan, as well as the short film ‘Le lunghe linee,’ presented for the first time with new audio and music. Despite the extraordinary importance of the series for the artist, this is the first time a major exhibition has been staged around the Linee.

The exhibitions are designed by Stephanie Goto and are complemented by a special presentation of archival material from the collection of Guido and Gabriella Pautasso. Books, documents, and typewritten manuscripts authored by Manzoni shed light on his methodology. Curated by Guido Pautasso and Irene Stucchi, the display of archival materials that accompanied Manzoni’s practice adds another dimension to his life, tracing the artist’s biography reanimating his personal and creative journey for a contemporary audience.

On the occasion of ‘Materials of His Time’ and ‘Lines,’ Hauser & Wirth Publishers has released a box set of two new catalogues providing a comprehensive historical-critical analysis of Manzoni’s two major bodies of work.

About the Exhibitions
‘Piero Manzoni. Lines’
In addition to the Achromes, the body of work that occupied most of Manzoni’s writings and discussions is his Linee series, which he initiated in the spring of 1959. The first iterations of Linee are characterized by slender, uninterrupted delineations on sheets of paper measuring approximately sixty by fifty centimeters, and were first presented in ‘Superfici achrome,’ an exhibition held at Bar La Parete in Milan. Ranging from short, simple lines traversing the width of rectangular sheets to increasingly long bands traced by a brush or roller on strips of paper, the artist produced a total of 90 Line works of various measurements, each rolled and sealed in closed black canisters with a manila label indicating the length of the line and the date of production. These distillations of expression function as a starting point without a conclusion and demonstrate Manzoni’s dedication to the idea of repetition and continuum — a concept that paralleled the formal investigations of some of his American counterparts, including Sol LeWitt, Agnes Martin, Barnett Newman, and Anne Truitt.

A line, Piero Manzoni surmised, ‘can only be traced without limits of length into infinity and beyond any problems of composition or dimension. Dimension does not exist in total space. . . The line develops only in length and extends towards infinity. The only dimension is time.’ In his essays and letters, Manzoni often expressed that the Linee were of tantamount importance to his Achromes. This was further evidenced in his decision to devote an entire show to the series, wherein 12 Linee were hung along gallery walls, presented in the Azimut gallery’s inaugural exhibition in Milan, which opened in December 1959. The exhibition was accompanied by a small catalogue featuring a critical text by Vincenzo Agnetti. On the occasion of the exhibition, a clever film was shot for Filmgiornale SEDI, in which photographer and improvised actor Uliano Lucas plays the part of a patron who acquires a Line work. After arriving home, he immediately unrolls the Line revealing the Italian word capolinea, meaning ‘terminus’ or ‘end of the line.’

Engaging with the spatiotemporal notion of artistic mark and labor, the series continued in the summer of 1960 with ‘Linea lunga 7.200 metri’ (Line 7200 Meters Long), on view here. Executed in the printing press of a local newspaper in Herning, Denmark, the fabrication of the 7200-meter-long-line was realized with the assistance of art patron Aage Damgaard, who provided access to the materials, technicians and engineers necessary to create this experimental and complex work. Connecting a print rotator to a hand roller developed specifically for the operation, Manzoni methodically applied ink to a massive scroll of paper — a painstaking process that took over three hours before reaching the end of the roll. Upon completion, the ‘Linea lunga 7.200 metri’ was enclosed in a polished metal container, following the artist’s instructions.

Manzoni’s Linee culminated in 1960 with a purely conceptual work: a simple black wooden cylinder affixed with a label that reads Linea di lunghezza infinita (Line of Infinite Length). In ‘Libera dimensione,’ a text written in the same year and published in Azimuth magazine, Manzoni stated: ‘The line only develops in length. It runs infinitely: time is the only dimension.’ He concludes: ‘there’s nothing to say, there’s only to be, there’s only to live.’

‘Piero Manzoni. Materials of His Time’
Manzoni initiated a paradigmatic shift in the status and function of the painting medium when he eliminated traditional materials from his practice in 1957 and began a series called Achromes. He coined this term to signify the absence of color and attributed it, as titled, to the white, or more aptly, a-chromatic works produced between 1957 and his death in 1963. Shedding light on Manzoni’s innovative approach to painting, this exhibition takes its title from a text written by the artist in 1960, in which he explains: ‘Painting and pictorial problems… are not part of the modern cultural cycle: they died long ago… a new language is a total transformation, nor can it have anything to do with the old language; an artist can use only the materials (thoughts and forms) of his time.’ Of the approximately 800 Achromes he created, more than 70 will be on view at Hauser & Wirth New York, evincing the breadth of Manzoni’s formal investigations, his retreat from the legacy of personal artistic expression, and his contribution to the foundation of Conceptualism.

In embracing a new visual language, Manzoni rejected the idea of art as a form of representation or expression; he instead emphasized the work of art as a ‘total space,’ comprising raw materials and an absence of color. He believed even two colors to be too much, as they would substantially detract from a pure and unmediated engagement with surface, texture, and form. Unlike the monochromatic works of his peers — such as Lucio Fontana’s slit canvases and Yves Klein’s paintings in the iconic hue of International Klein Blue — Manzoni’s works obviate all color relationships and thus render the inherent color of their materials neutral. The first examples of these pieces, created in 1957 and 1958, were composed of canvas and gesso, followed by cut and sewn canvas squares, as well as iterations made of canvas and kaolin, a white clay.

In 1960, at the height of his artistic maturity and cognizant of the path he needed to follow, Manzoni’s experimentation with materials and forms exponentially grew, spurring a prolific period for this anomalous artist. The resulting Achromes inspired vast research into diverse natural and synthetic materials, such as cotton wool, canvas, polystyrene, phosphorescent paint, and even bread, stones, and straw. These unorthodox elements appear in works throughout the exhibition, including: ‘Achrome’ (1962), which comprises a four by four grid of bread rolls covered in kaolin, and ‘Achrome’ (1962), wherein tufts of stretched synthetic fiber form a rectangle.

In addition to the assertion that the Achromes are nonrepresentational beyond their physical components, Manzoni continuously stripped content from form by eliminating associations and visual referents. Despite the range of materials and shades of white employed in creating the Achomes, their meaning remained constant. Manzoni’s various techniques evince his search for an absolute surface. When his materials possessed an inherent color—like cobalt chloride salt or synthetic silk, as seen in ‘Achrome’ (1961) – Manzoni didn’t view this quality as a color, but rather as a property of an Achrome.

Driven by his belief that each artwork must be a ‘total space,’ Manzoni also conceived of completely enveloping environments, in which minimal spatial interventions would transform a room. Though such immersive spaces were never completed during Manzoni’s lifetime, they have been realized at Hauser & Wirth New York for the first time in this exhibition, more than half a century after their original conception. Taking direction from an aspiration Manzoni shared in a 1961 letter to his friend Henk Peeters, a room in all white fur and another coated in fluorescent paint have been constructed here, after a design by Stephanie Goto, effectively shrouding viewers in textured space and phosphorescent light, respectively. These previously unrealized rooms further manifest his conceptual ideals, producing spaces so total that they fully occupy and employ the third dimension as medium.