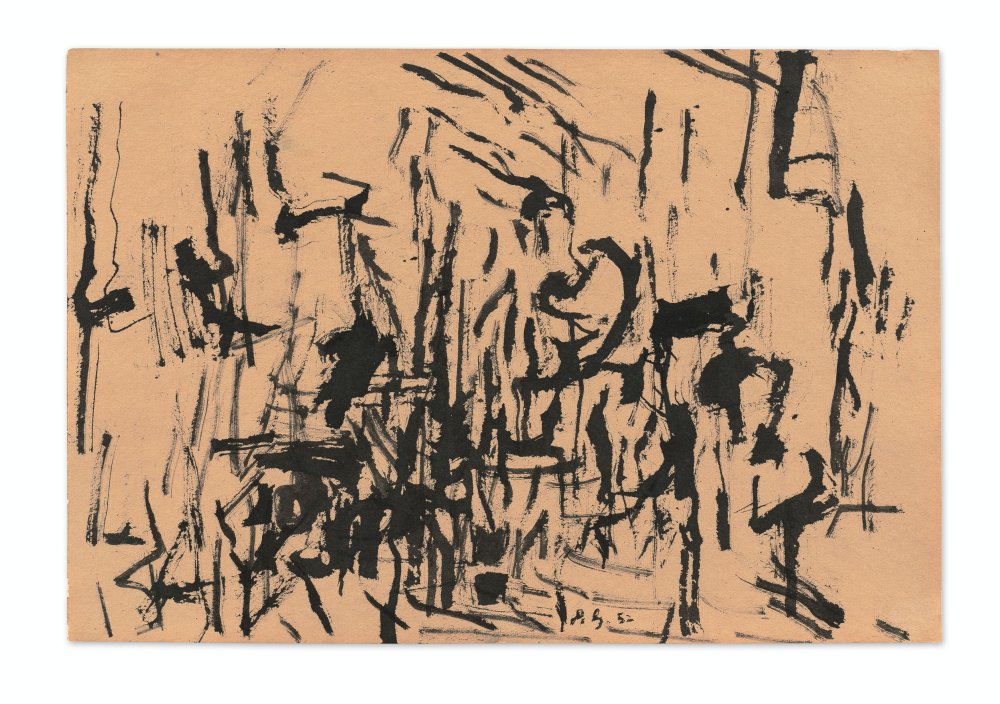 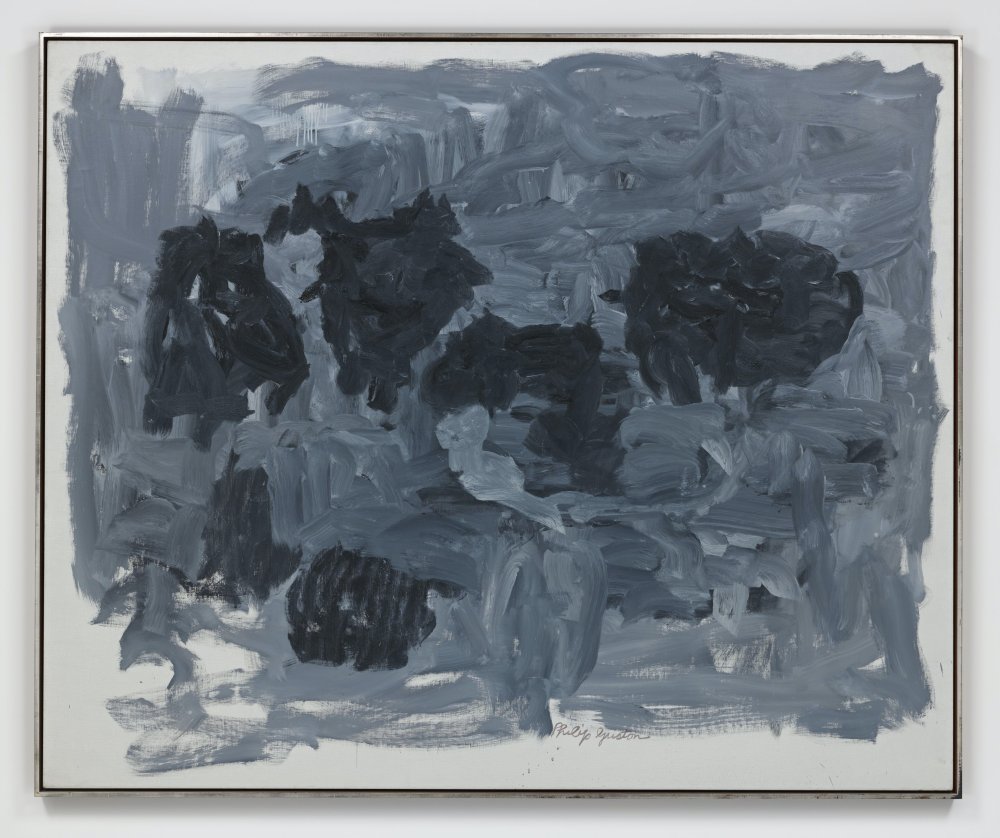 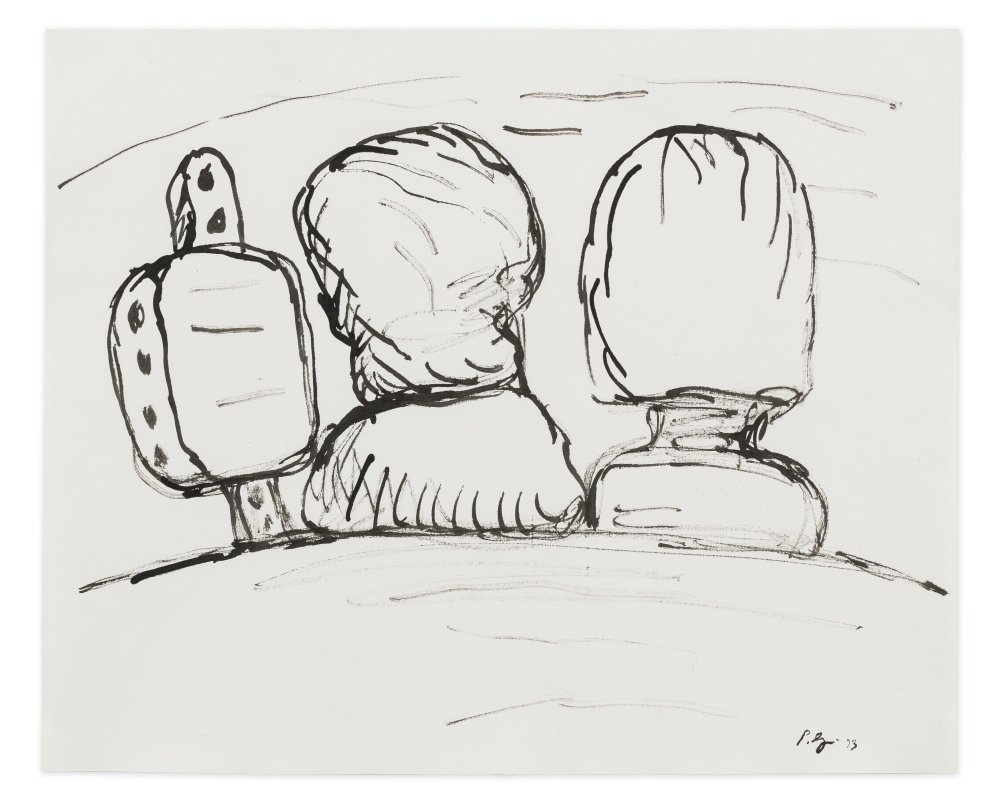 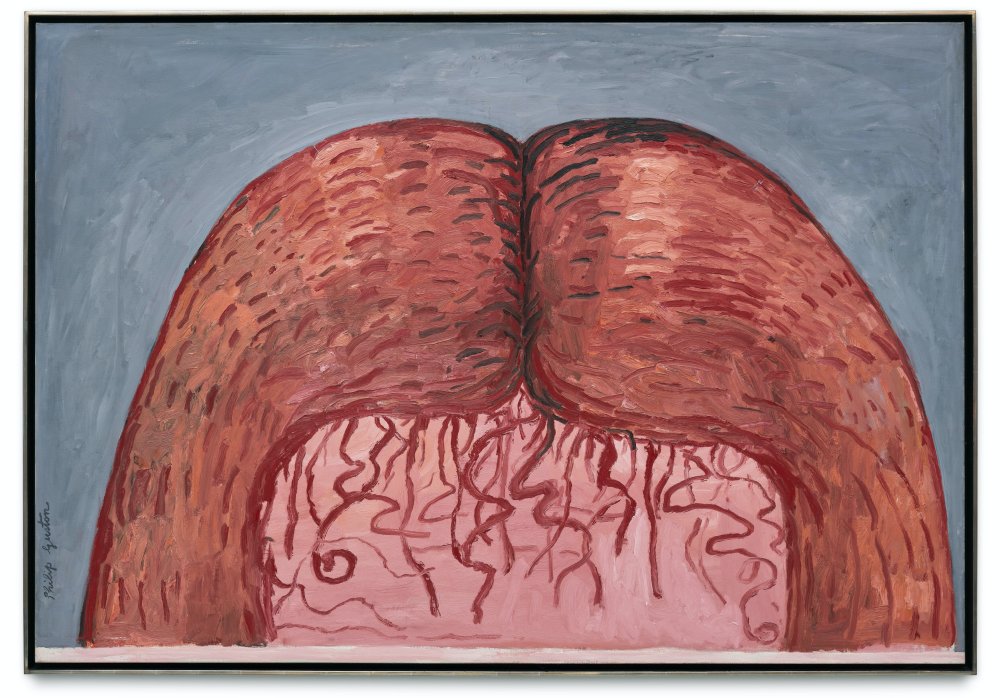 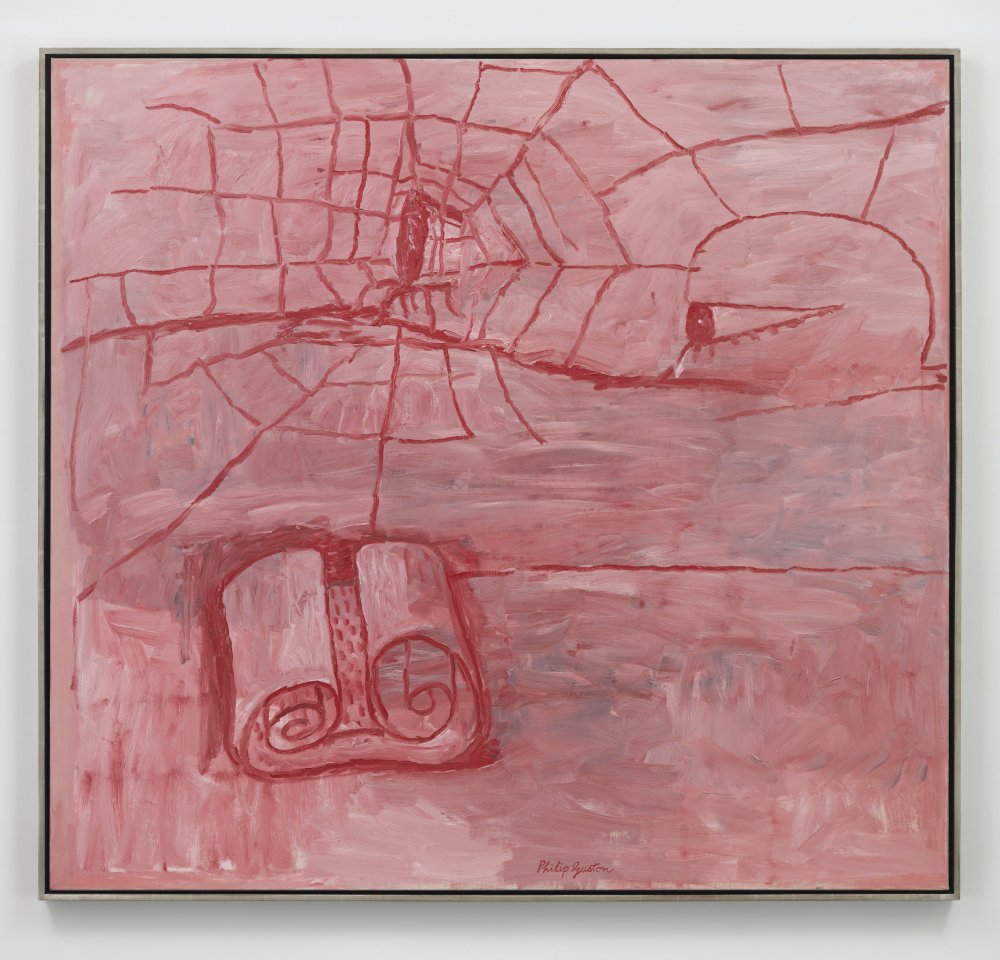 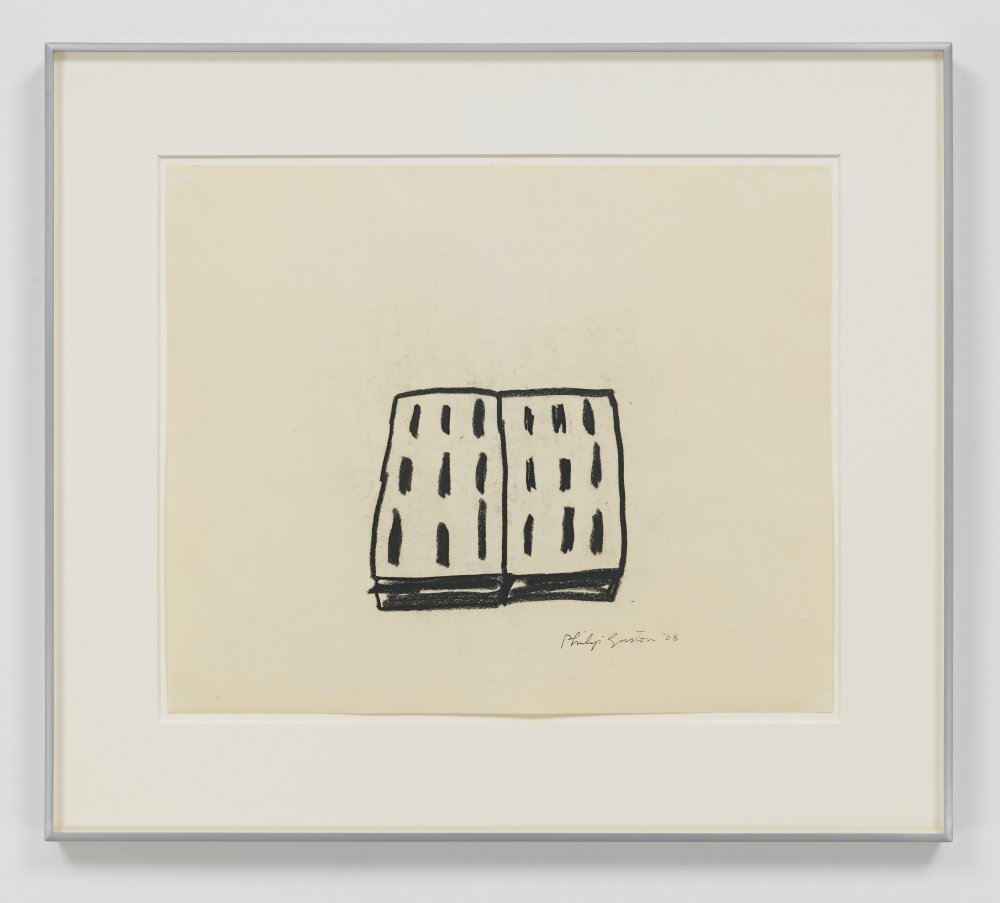 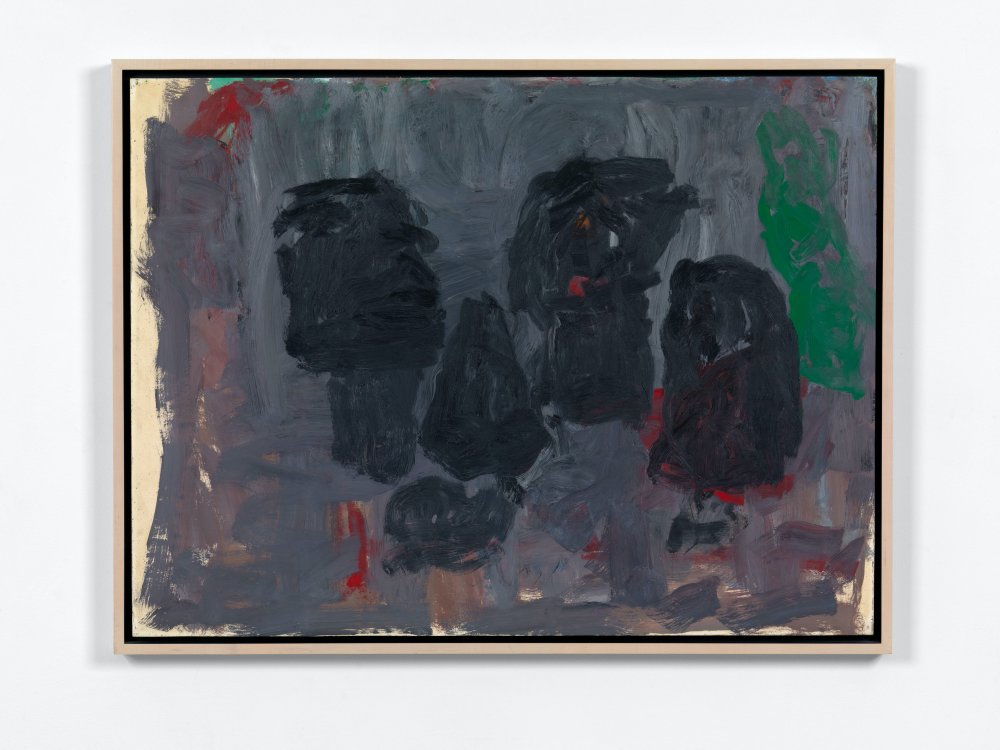 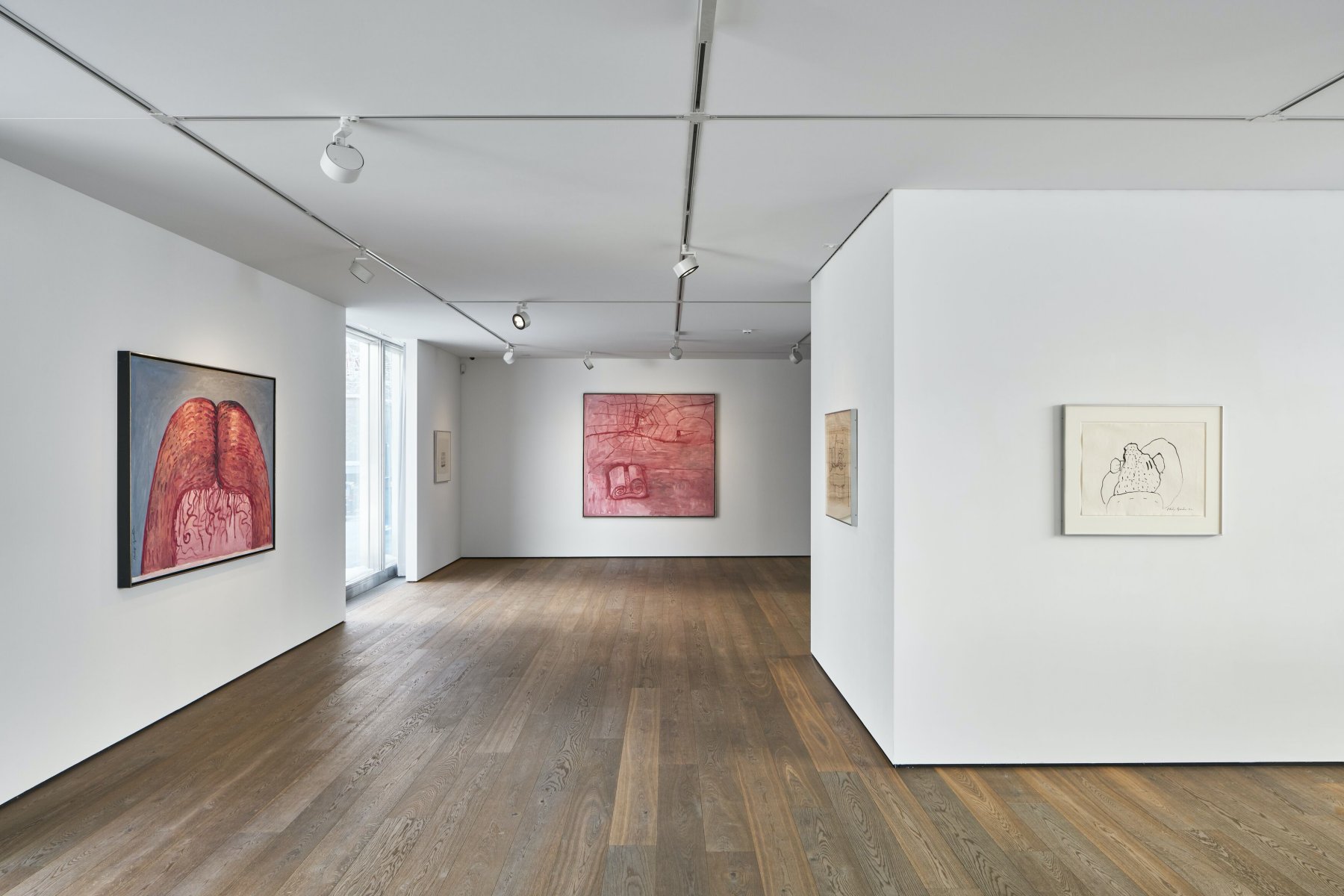 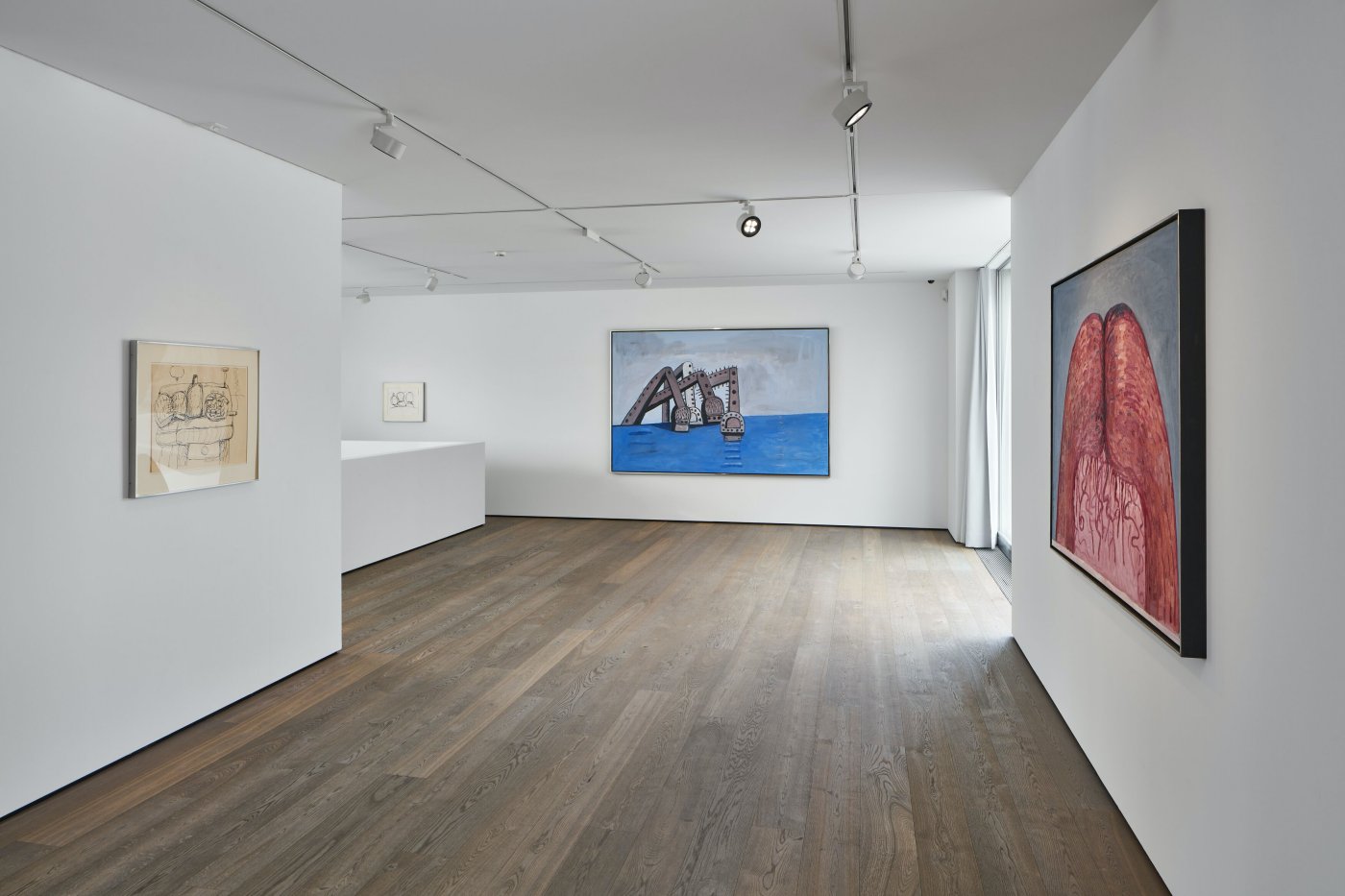 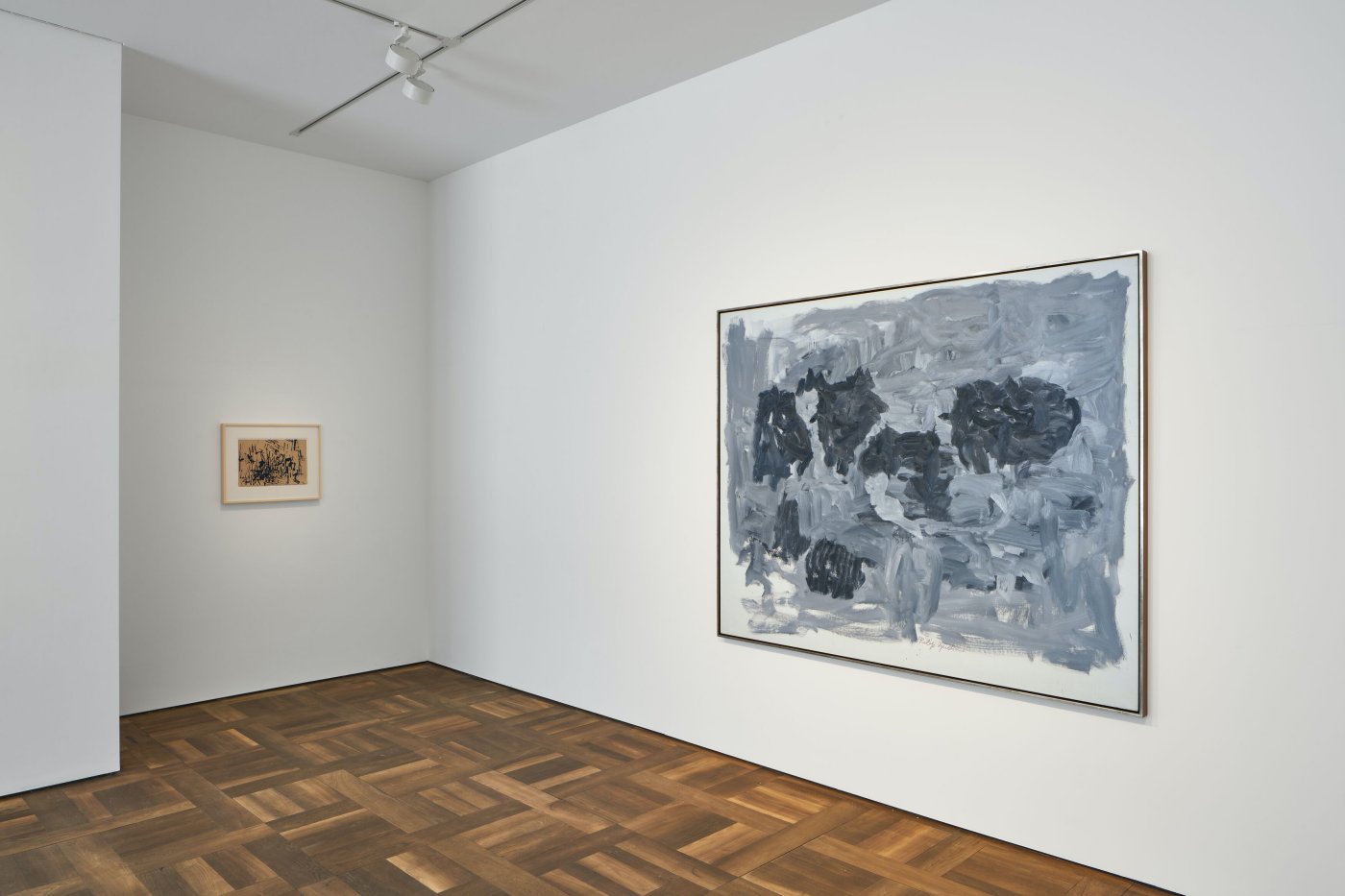 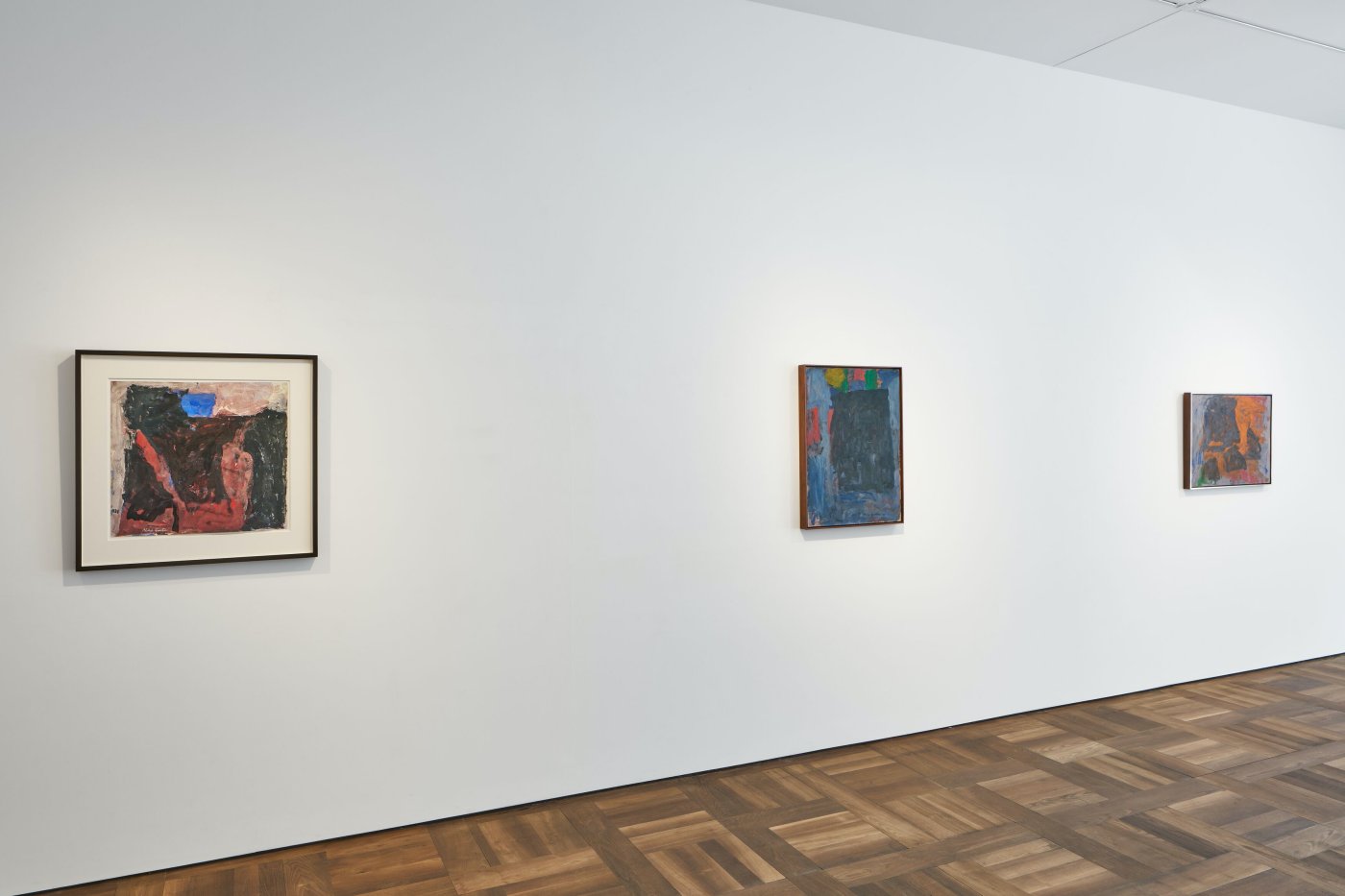 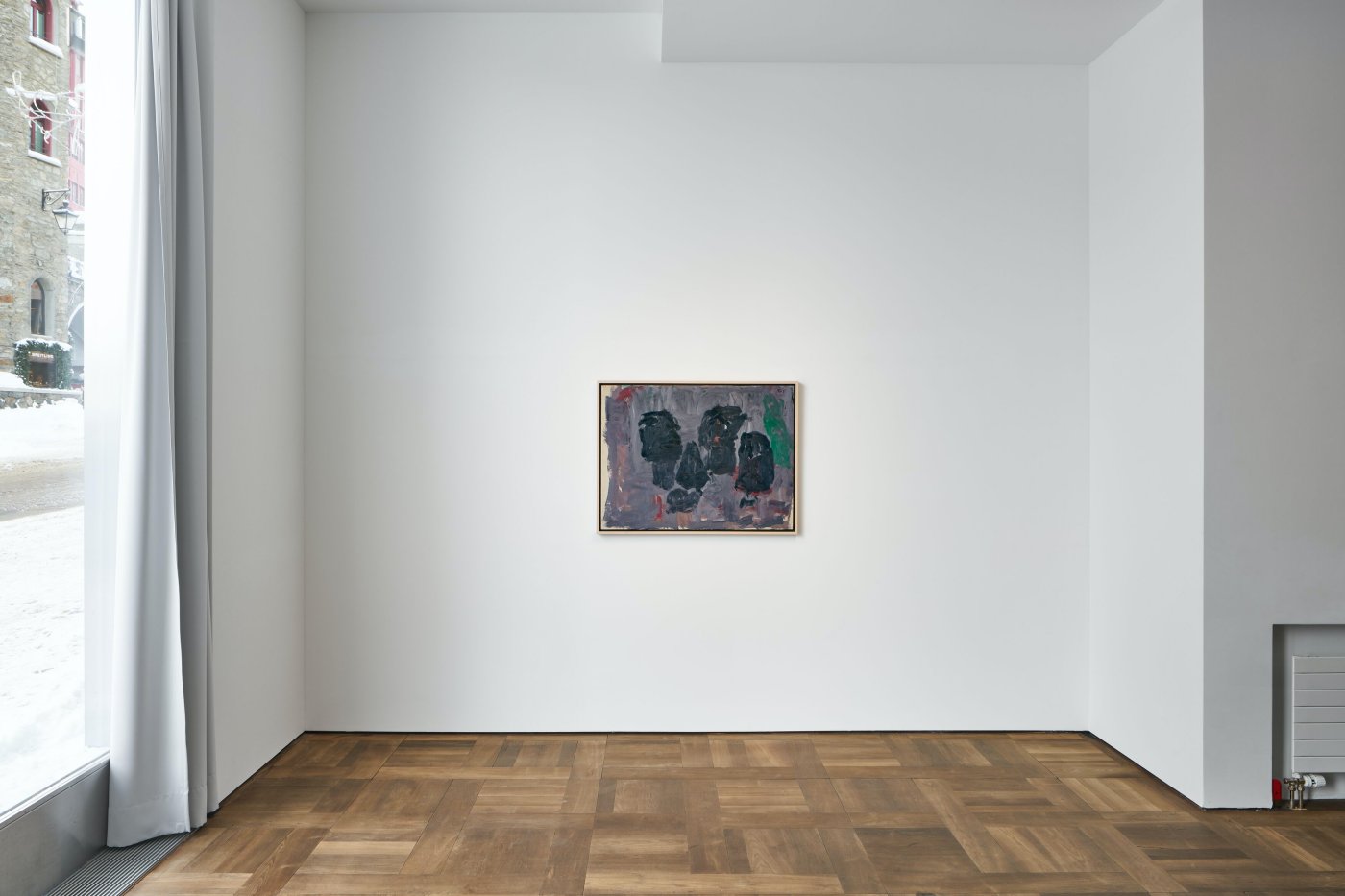 The visionary art of the American painter Philip Guston (1913-1980) spans half a century and continues to exert a powerful influence on contemporary culture today. Recognized as a pioneer of abstract expressionism before his return to figuration in the late 1960s, for Guston painting was an encounter between thought and feeling, image and idea. Within this exhibition, Hauser & Wirth will present two bodies of work from different periods, abstract (1952-64) and figurative (1968-1977), that together show the depth and complexity of his personal iconography. Available to view in person and online, the significant collection of 19 drawings and paintings reveals Guston’s complete commitment to direct experience, moving between a pictorial language relating to his studio and painting tools, to contemplative motifs of his wife, the poet Musa McKim, and their shared lives together. These deeply personal works transcend everyday experience to present an intimate vision of Guston’s creative process and unique artistic freedom.

The ground floor gallery will showcase a collection of abstract works created prior to Guston’s departure from pure abstraction and subsequent return to figurative painting. At this moment, with the artist seemingly at the height of his career as a leading figure of the New York School of abstract expressionism, an unexpected shift occurred. Dark shapes began to crowd his paintings, coalescing into what would become a near-figurative language. ‘The Actors V’ (1962) and ‘Group II’ (1964) are both dominated by a central group of dense black forms embedded in smoky gestural fields of subdued grey, obliterating the artist’s previous more lyrical abstraction with their shimmering fields of luminous colour. These dark forms command the viewer’s attention in a new and urgent way. This group of abstract paintings also demonstrates a search for self-representation, a subject that would continue to occupy Guston’s creative output until his death in 1980. In ‘Vessel’ (1960), the gestural painting’s fleshy grounds peek through a sea of blue hues, accompanied by vivid pops of vermilion and forest green and one sunny patch of yellow. This is a ‘vessel’ whose contents cannot be known.

The exhibition continues on the first floor, demonstrating Guston’s complete transformation into a new figurative language from 1968 onwards. The tangibility of the late work is signposted through drawing, including basic forms that slowly manifest into an intriguing vocabulary of unassuming objects of everyday life, for example books, as seen in the charcoal on paper work ‘Untitled’ (1968). By this time, Guston had permanently left New York City for Woodstock, where he developed close ties with several poets and writers, among them his wife Musa McKim. Motivated by internal forces, the works created during those years possessed a mounting freedom unique among the artists of his generation.

By the mid-1970s, the iconic forms emerging from the paintings were unlike anything previously seen, harnessing the narrative power Guston had known in his murals and early figurative works as a young painter. An original language of pictorial symbols became synonymous with the artist’s work. His painting tools and scenes of the studio joined various objects of domestic life to allow an intimate view of Guston’s life and his process of continuous self-reflection.

Works dedicated to his wife Musa began to appear with increasing frequency from 1975 onwards, as we see in ‘Musa’ (1975) and subsequent drawings on view. She was a constant source of contemplation for him, and the compelling authenticity of these works attest to the power of their bond. ‘The Poet’ (1975) serves as an homage to the prominent role that poetry played in Guston‘s work, calling upon visual motifs that recurred as touchstones throughout the artist‘s career. The fleshy pink palette that pervades the large-scale painting has its roots in Guston‘s abstract paintings of 1952–1954, with the addition of more personal iconography: a Cyclopean eye, a scroll of poetry and an intricate web with a spider at work in its centre.

‘Philip Guston. Transformation’ presents an artist moving forward, continuously responding to the world around him with vigour and unwavering passion. It was Guston’s confident ability to shift fearlessly between abstraction and figuration that continues to make his work relevant today, from the highly charged forms of the late abstract works to his lifelong fascination with poetry and his reverence for his wife Musa McKim.

To coincide with the exhibition, Hauser & Wirth will debut an exclusive online screening of ‘Philip Guston: A Life Lived’, from the 18 – 20 December. In this acclaimed documentary by Michael Blackwood, filmed in 1971 at Guston’s Woodstock studio and during his 1980 retrospective at the San Francisco Museum of Modern Art, the artist speaks candidly about his life, his philosophy of painting and the psychological motivation for his work.