Hauser & Wirth New York presents ‘Philip Guston, 1969 – 1979,’ an exhibition focused on the breakthrough figuration that emerged in the final decade of the 20th century master’s career. 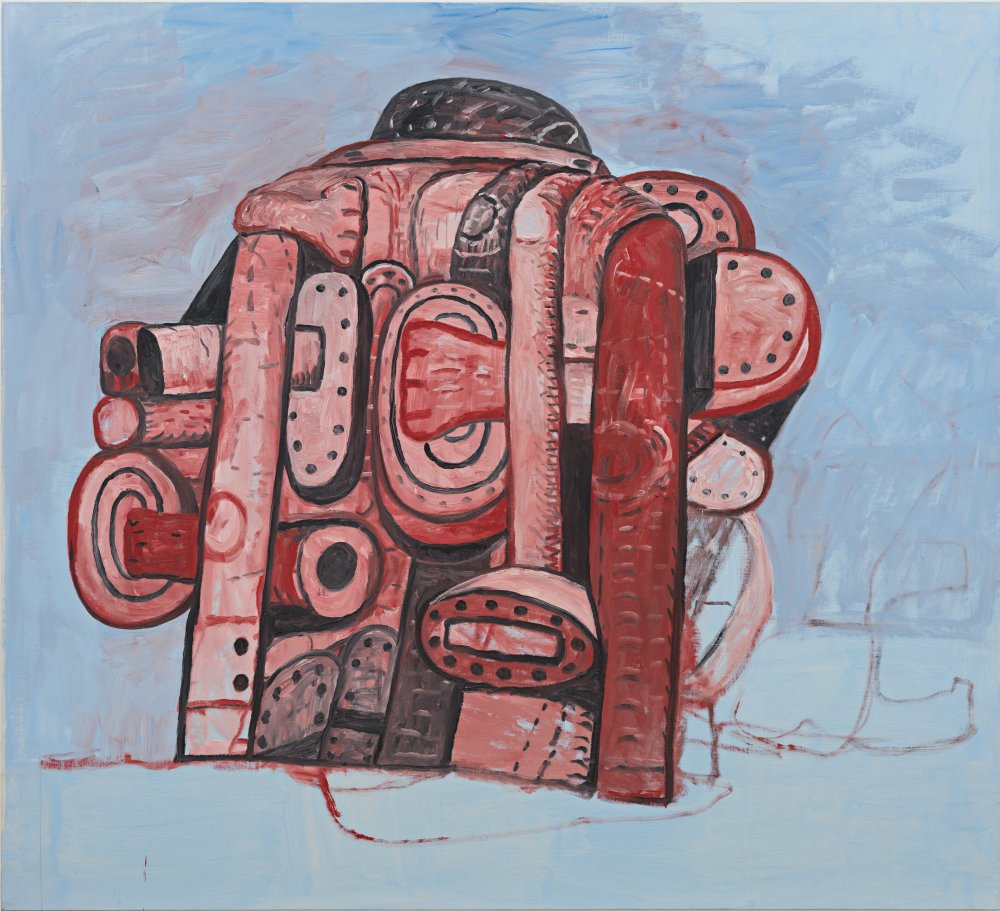 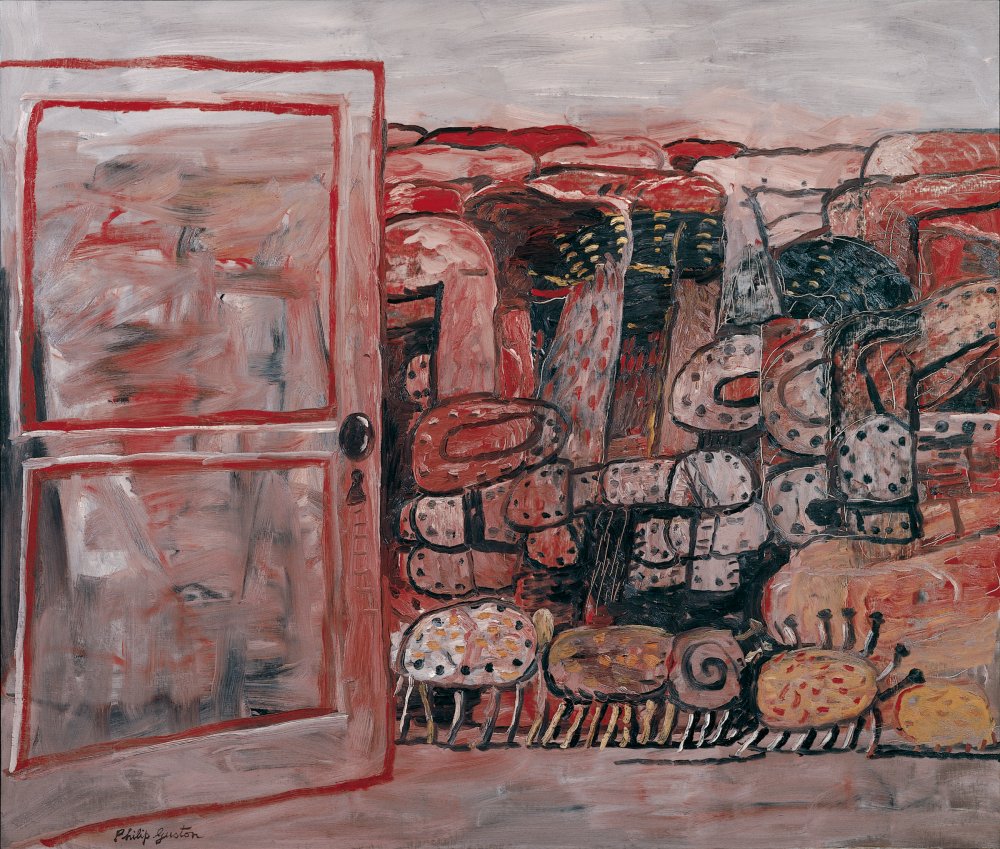 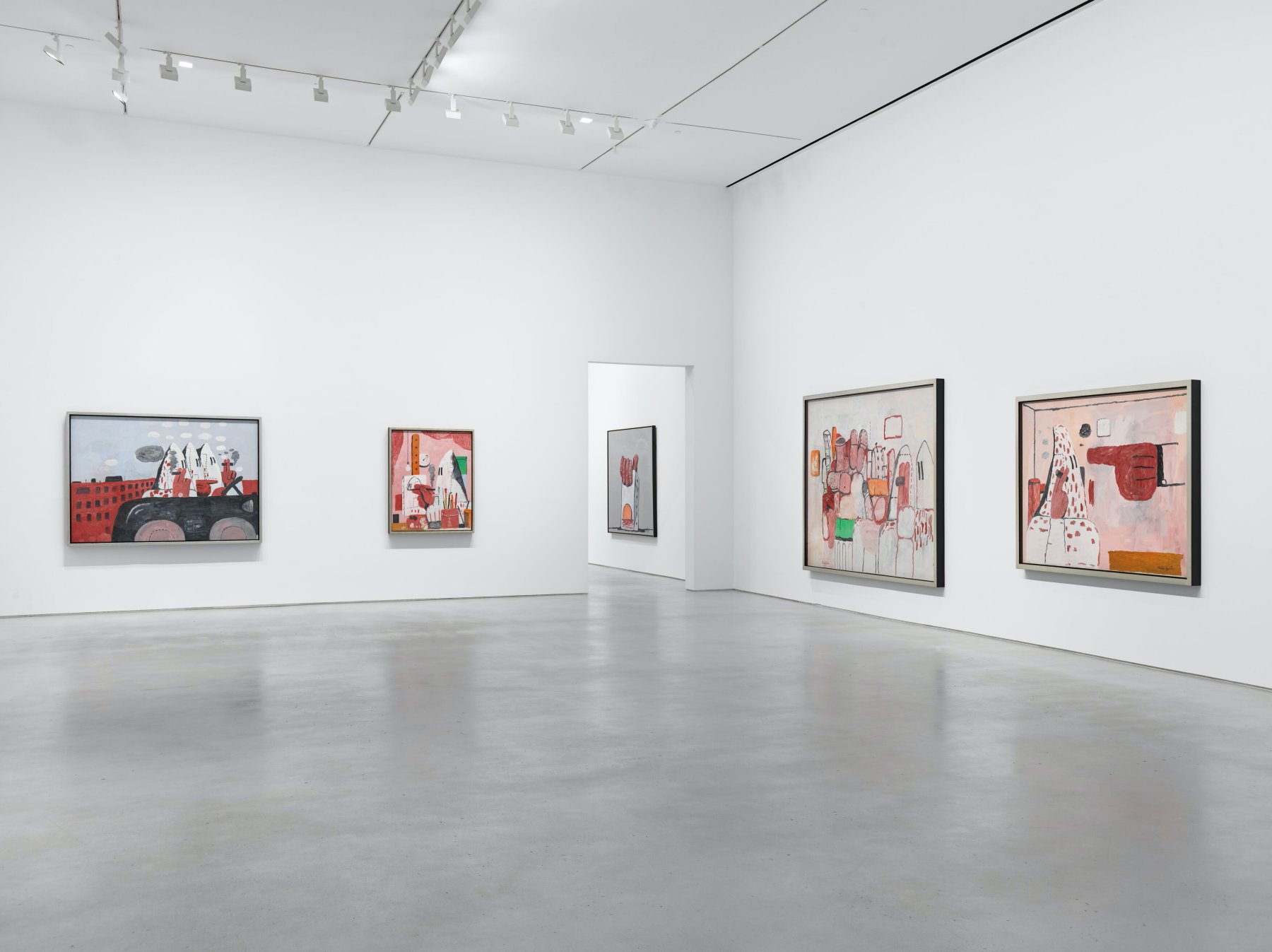 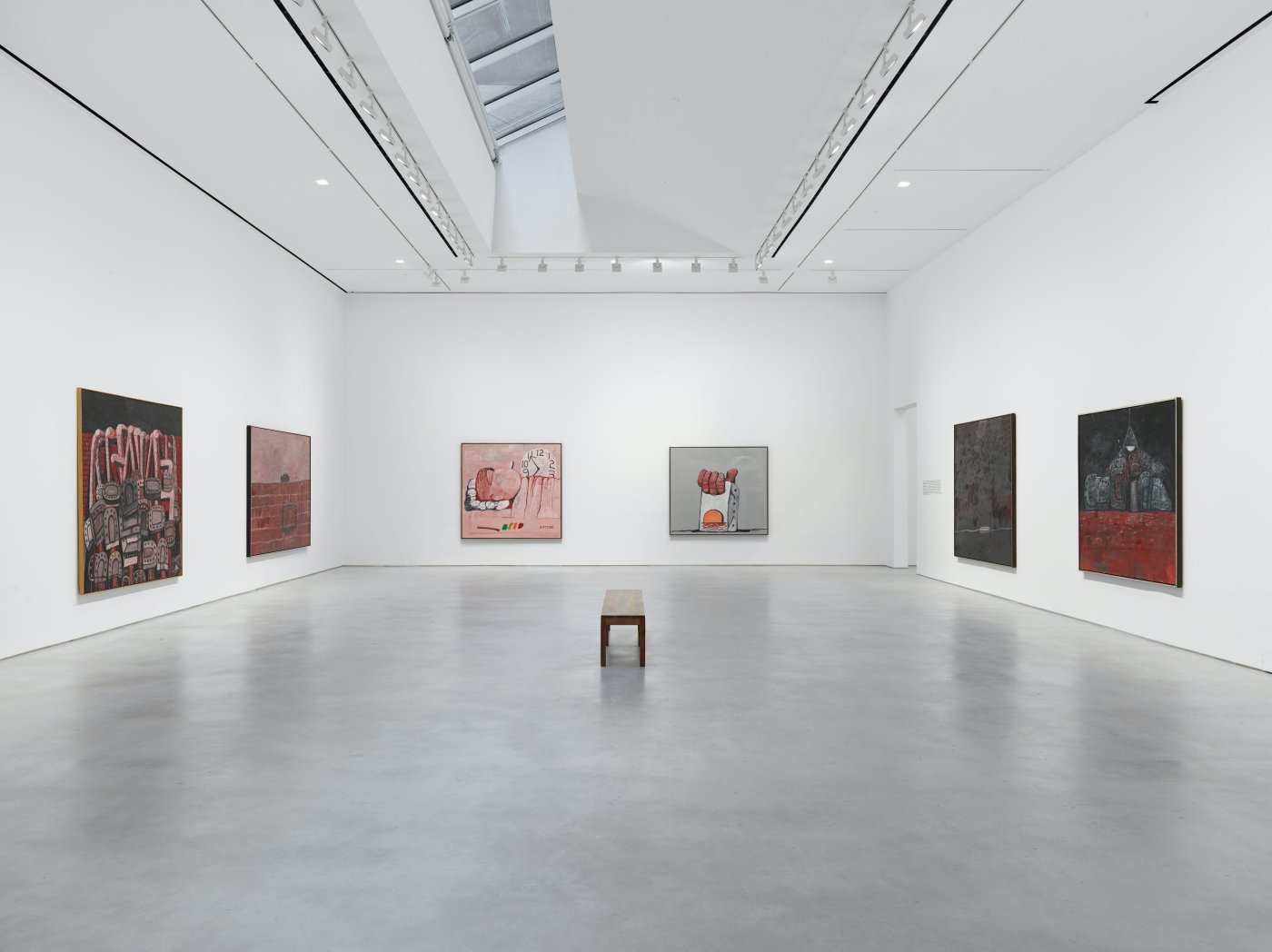 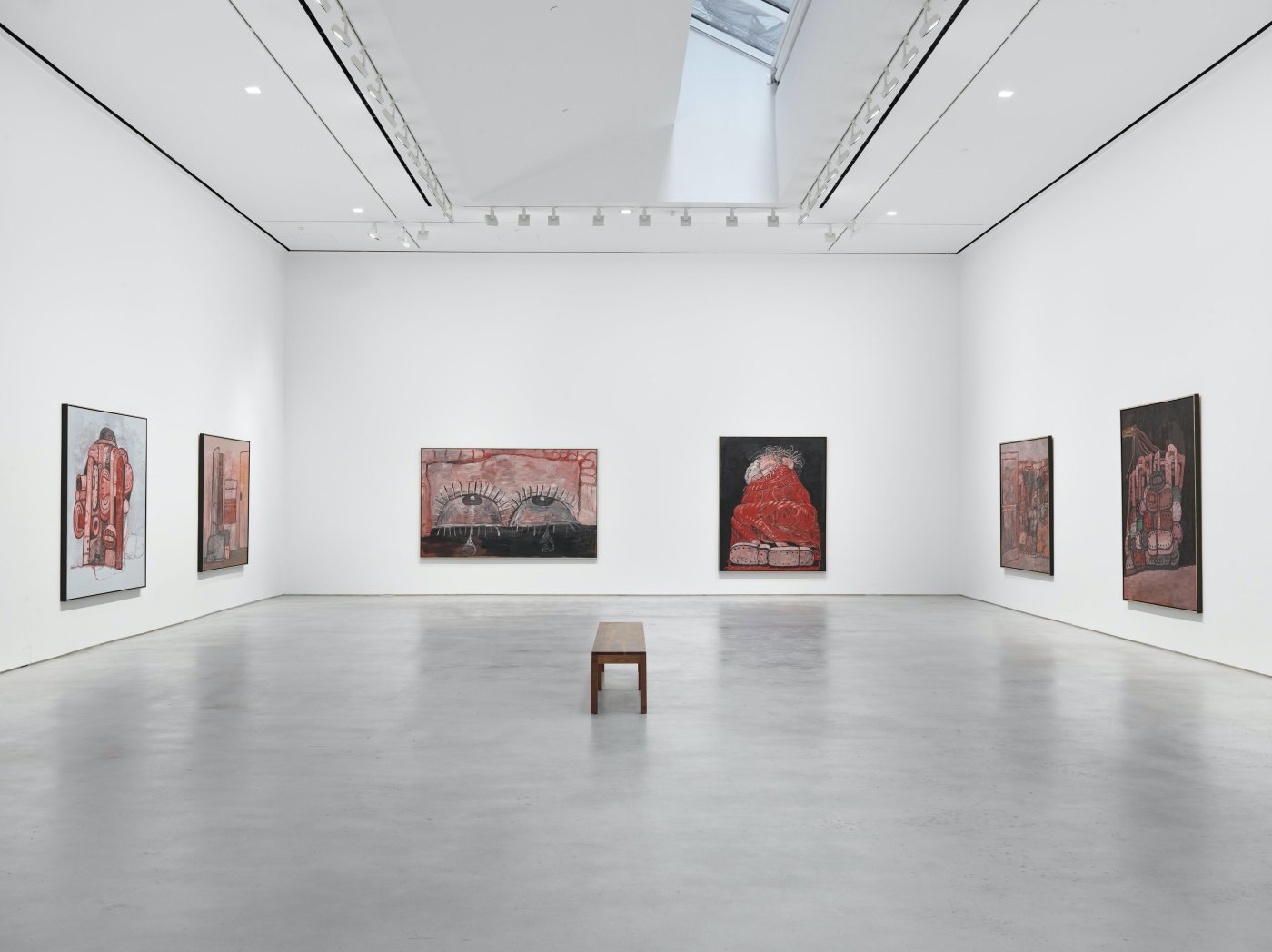 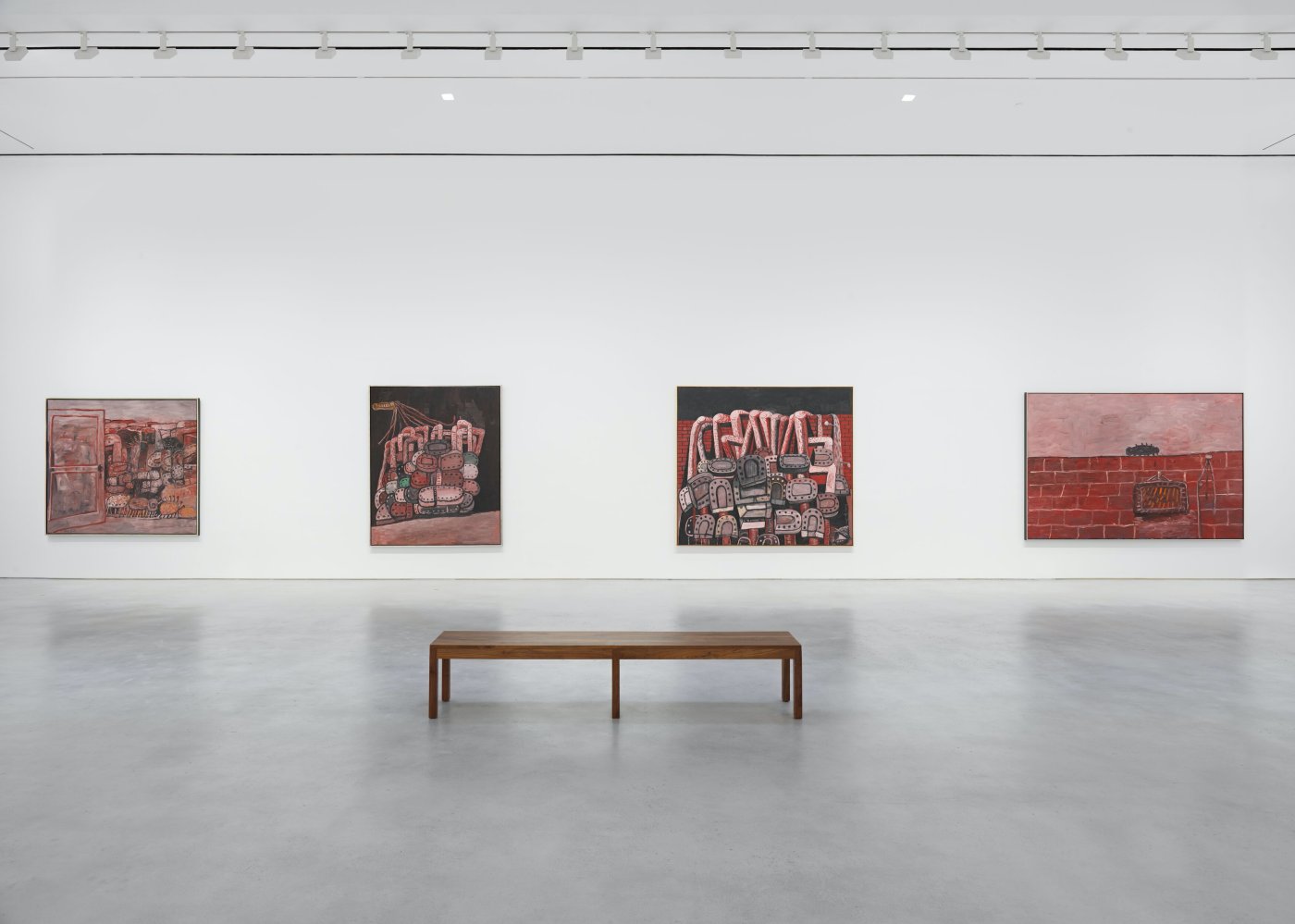 Including paintings never before exhibited, the show brings together eighteen masterworks created after the artist turned away from abstraction to assert an unprecedented new figural language. While critics denounced his dramatic shift toward dark, cartoon-like imagery, the paintings of Guston’s last years are today considered milestones of modern art. They display not only great technical mastery, but uncompromising courage in directly addressing the injustices of American society. Made at the height of his creative life, the paintings on view attest to Guston’s enduring influence and astonishing relevance to contemporary artists and the public now.

Comprising masterworks on loan from important private and museum collections, ‘Philip Guston, 1969 –1979’ will remain on view through 30 October at Hauser & Wirth’s West 22nd Street building in the Chelsea Arts district.

The exhibition spotlights the confessional intimacy, introspection and self-revelation of Guston’s late canvases, with their universal themes. Here, the artist’s exploration of the human condition harkens back to motifs from his earliest figurative works of the 1930s and 40s, informed by the bigotry and racist violence he witnessed as a boy in Los Angeles. The exhibition at Hauser & Wirth traces the evolution of Guston’s return to figuration from the very end of the 1960s, when his distinctive hooded figures first appeared as avatars of our complicity in the everyday evils of society. The increasing urgency of Guston’s imagery over the next decade is evidenced in a richly rendered and deeply unsettling iconography. His distinctive visual language includes disembodied legs, pointing fingers, and piles of shoes that summon the horrors of the Holocaust and presage later genocides and racial terror. But Guston’s brilliance resides in his ability to convey the persistence – albeit delicate – of hope within this dark realm, with an iconic lightbulb suggesting an eternal potential for illumination.

‘Philip Guston, 1969 – 1979’ will be presented in two large adjacent spaces on the gallery’s street level. In the first room, visitors will be met by six canvases made in 1969 and 1970, the year in which Guston’s return to figuration was heralded by his now infamous solo exhibition at the Marlborough Gallery in New York City.

These six paintings feature the artist’s sinister but cartoonish hooded figures, unmistakably reminiscent of the Ku Klux Klan. Prompted by the violence and civil unrest in America during the late 1960s, Guston’s paintings here speak to the insidious banality with which evil permeates society: his hooded figures are engaged not in acts of terror but in ordinary everyday pursuits, smoking their cigars and going about the quotidian routines of American life, as in the paintings ‘Riding Around’ and ‘Blackboard’, as well as ‘Open Window II’ (all 1969), one of four works being presented to the public for the first time in this exhibition.

In this group of paintings, Guston holds up a mirror not only to America’s racist past and present, but to his own culpability by dint of white privilege and the complicity it engenders. In ‘The Studio’ (1969), one of the artist’s most iconic paintings, Guston depicts himself in the grand tradition of Western art, as an artist at work before his easel. In this allegory of painting, however, Guston occupies not the exalted role shown in celebrated self-portraits by such forebearers as Gentileschi, Vermeer, Velazquez, and Courbet, but as one of his own hooded figures, cigar in one hand and paint brush in the other, hood splattered with blood red marks. By identifying himself with the enemy, Guston creates a radical image of an artist wrestling with both the act of painting and his own role in the state of the world.

In the face of overwhelmingly negative critical response to the Marlborough Gallery exhibition, Guston and his wife Musa escaped to the American Academy in Rome. In Italy, the artist immersed himself in the work of the great Italian masters he studied in his youth. Following his return home to Woodstock, New York, Gusto began to remove the hood. A bean-shaped head with furrowed brow and staring eye emerges, often lying in bed, smoking a cigarette. In the exhibition at Hauser & Wirth, ‘Pittore’ (1973) finds this avatar in a night room where an imposing clock looms above and the tools of the artist’s trade – paintbrushes and pigments — rest nearby.

The mounting intensity of Guston’s work over the ensuing years before his death in 1980 comes into full focus in the second room of the exhibition, where twelve major paintings made between 1973 and 1979, including ‘Pittore,’ are on view. Progressively more enigmatic, richly rendered, and unsettling, the imagery that emerged from the artist’s psyche onto the canvas during his overnight sessions in the studio were as surprising to him as they were to critics and the public.

Guston’s unique visual language, growing from canvas to canvas, incorporates tangled and disembodied piles of legs, shields, bugs, whips, doors, and piles of shoes that recall the horrific images that emerged via the media from the liberation of Nazi concentration camps to the carnage of the Vietnam War and the Killing Fields of Cambodia.

In ‘Ancient Wall’ (1976), soles of shoes are stacked along the painting’s foreground while a collection of limp legs dangle over an imposing brick wall. A lone unblinking eye judges the scene from the lower right corner of the canvas, a witness to the terror. Similar imagery arises in such paintings as ‘Night Room’ (1976), in which amass of legs and shoes is silhouetted against the black void of the night sky, and ‘Entrance’ (1979), where a door has opened onto a room stuffed full of shoes, legs, shields, and bugs, among other detritus of trauma.

In ‘Back View II’ (1977), Guston presents the back of a colossal figure heading away from the viewer, toward the horizon. Although monumental in stature, this figure appears burdened by all he carries on his back –shoes, legs, and shields that resemble trash can lids. The image is widely regarded as a portrait of Guston’s father, a former blacksmith who, as a Russian Jewish immigrant, had been reduced to working as a junkman. Guston’s inheritance – his fundamental sensitivity to the weight of the human condition, his artistic cleaving to the tenets of the Renaissance – coalesce into this remarkable portrait.

The influence of the great masters on Guston is evident in ‘Sleeping’ (1977), a self-portrait of the artist curled up in bed, alone under a blanket, still wearing his shoes. His wrinkled brow is adorned with gray coils of hair. The foreshortened composition and delicately draped fabric call to mind the Lamentation of Christ by Italian Renaissance master Andrea Mantegna, revered by Guston, where a lone figure is placed within a confined and somber space, head turned and eyes closed, portrayed through a forced perspective originating at their feet. In paying tribute to the Renaissance, Guston signals toward the enduring power of art as a catalyst for expression, illumination, and elevated consciousness. This moving work hangs beside ‘Tears’ (1977), created after Guston’s wife suffered a devastating stroke. It is this powerful summoning of personal and universal, the human pain of aging and illness and loss, that lends these works their power.

The exhibition comes to its climax and coda with Guston’s 1978 painting ‘On Edge’, a dark, compositionally spare canvas with a rich black surface shimmering with subtle pink and red undertones, which hasn’t been shown for 20 years, and never in the US. A thin, pinkish-white line cuts across the unrelenting void, swelling into a small pool before narrowing again.

Specific yet deeply enigmatic, this line invites myriad associations, suggesting both the trace of a message remaining on an erased blackboard and the glow of a lamp peeking under the closed door of a pitch-darkroom. In its breathtaking mingling of despair and hope, this work seems to point viewers toward the horizon, one of Guston’s most enduring motifs.

‘Philip Guston, 1969 – 1979’ is the latest in an ongoing series of thematic curated exhibitions that Hauser & Wirth has presented internationally since undertaking representation of The Philip Guston Estate in 2015.Yielding new scholarship and bringing attention to specific imperatives and achievements in the artist’s career, these exhibitions began with ‘Philip Guston: Painter 1957 – 1967,’ a 2016 presentation focused upon the last ten years of the artist’s engagement with abstraction. Guston’s searing satirical drawings of Richard Nixon were shown at the gallery in New York in fall 2016, in conjunction with the apocryphal US general election; they were shown again in London in 2017. In 2019, ‘Resilience: Philip Guston in 1971’ was presented at the gallery’s complex in Los Angeles, in a show focused entirely upon the single year following overwhelming critical rejection of the artist’s now legendary 1970 exhibition at Marlborough Gallery. In late 2020, ‘Philip Guston: Transformation’ opened at the gallery’s St. Moritz space, centered on deeply personal works referencing the artist’s wife and the poetry he loved.