Monika Sprüth and Philomene Magers present a solo presentation of work by Peter Fischli at the London gallery, an exhibition that continues the gallery’s nearly forty-year collaboration with the Swiss artist. Occupying two floors, the show focuses on three bodies of work. 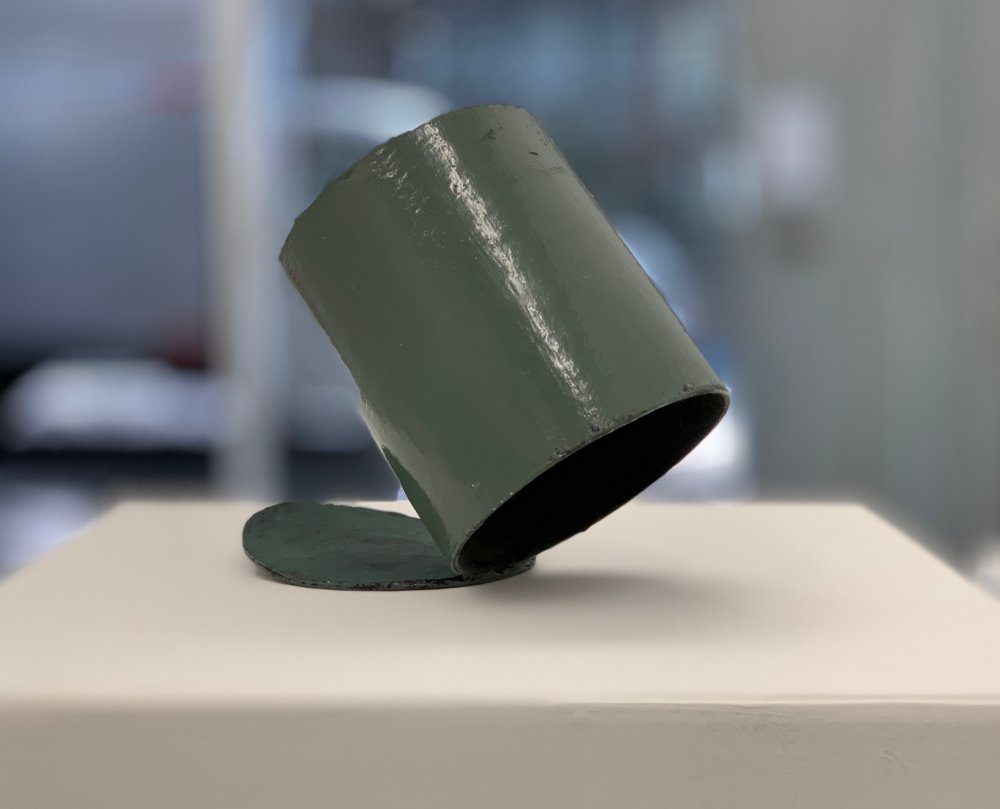 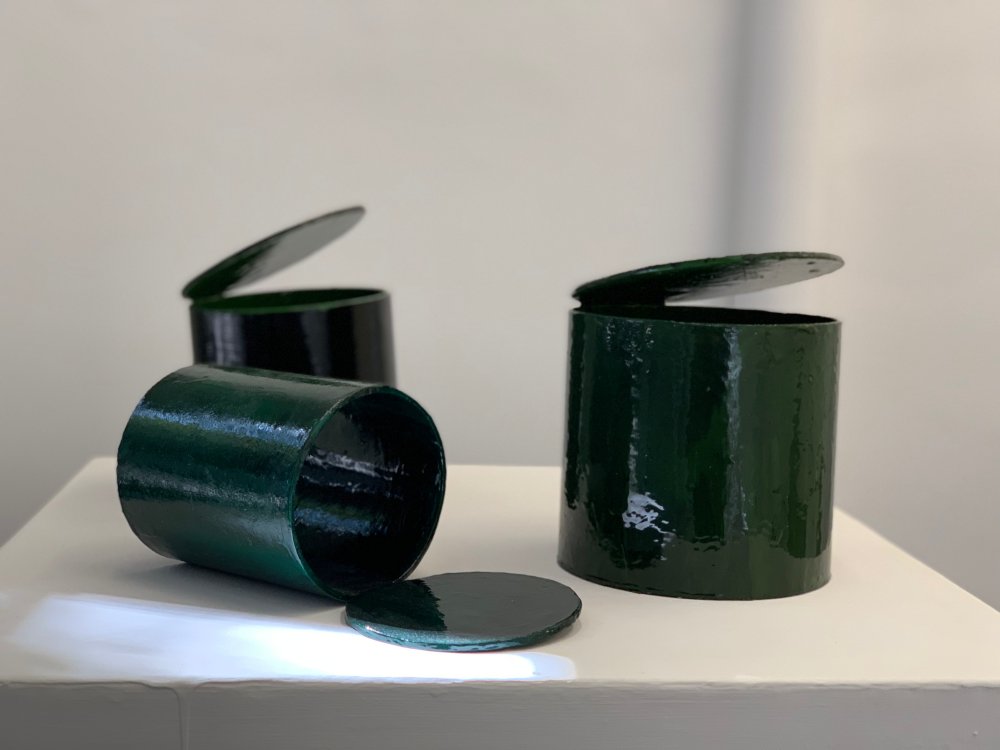 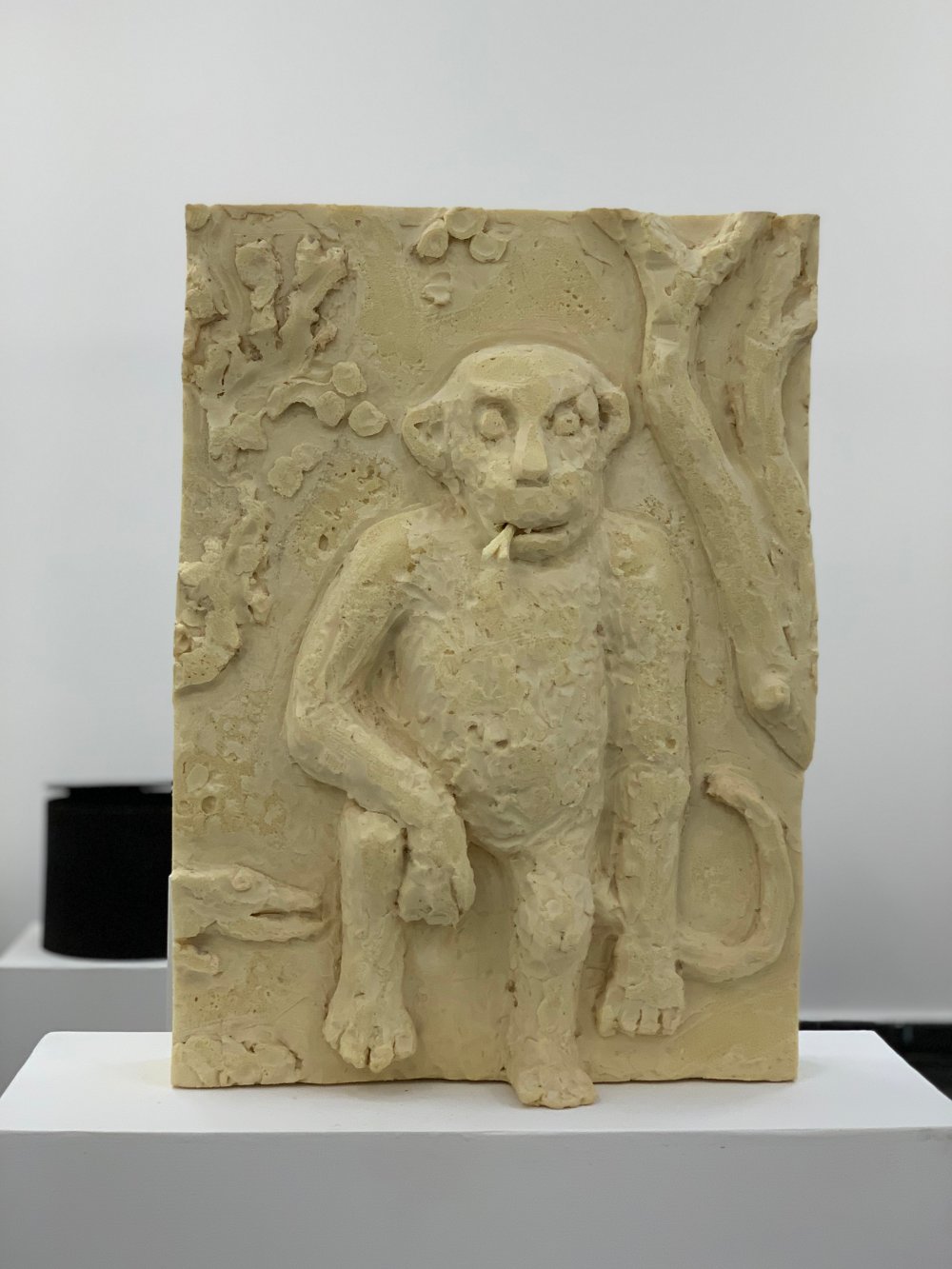 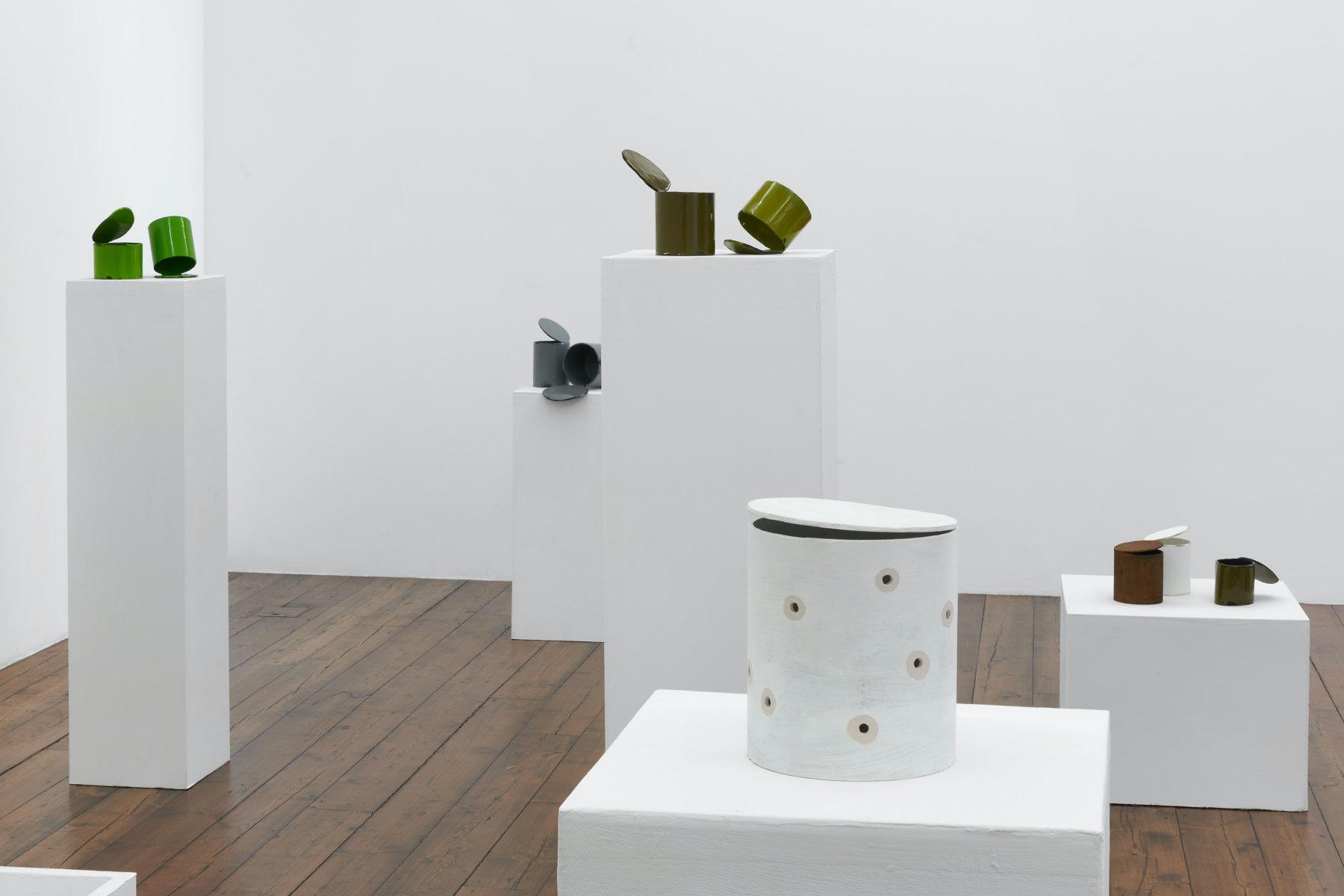 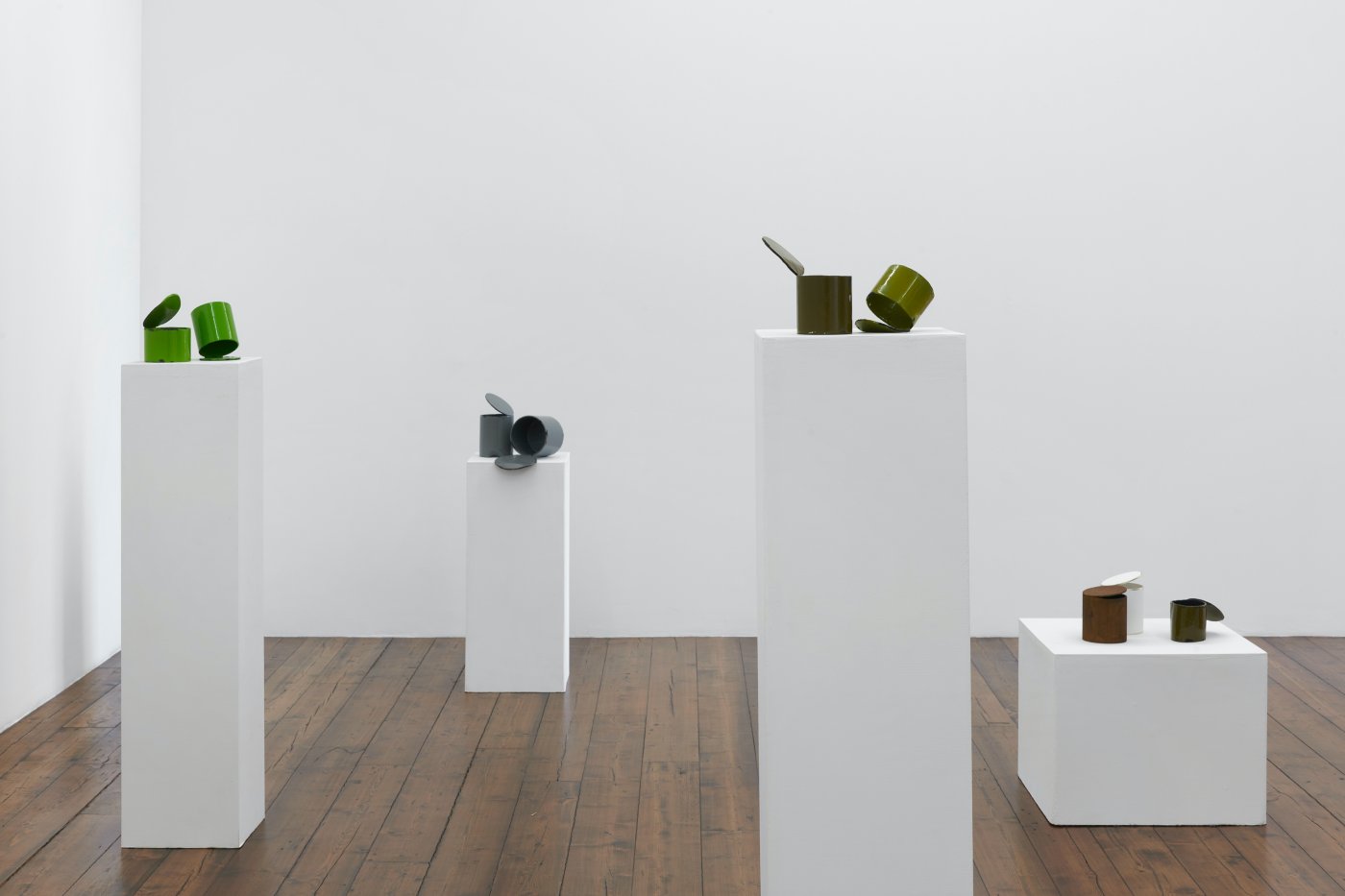 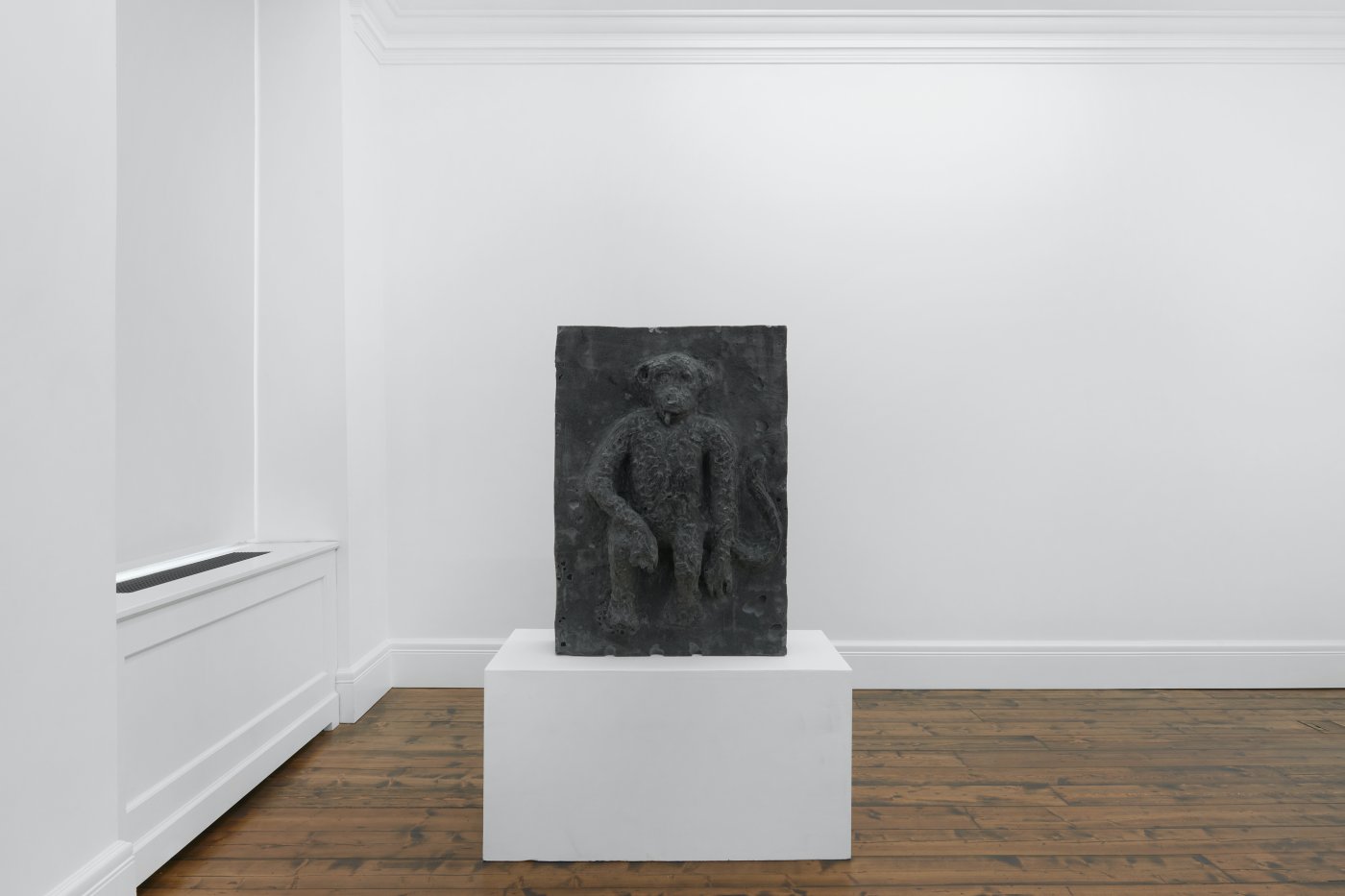 In his wide-ranging oeuvre, Fischli carefully observes and draws from the everyday world to create sculpture, installation, video and works on paper that address similar concerns to those explored as part of his collaborative practice with David Weiss (1946-2012). His ongoing interest primarily focuses on the often overlooked, quotidian aspects of everyday life which he reworks in an experimental and humorous way. Often using simple or conventional materials, his works raise questions about the nature of art and our existence in the world by shifting the meaning and reading of things.

Presiding over the exhibition is Fischli’s PROFESSOREN-EDITION (The Phantom of the Authentic); the lithograph in the reception is based on a watercolor of a jungle- dwelling monkey that the artist painted for his godfather when he was ten years old. Its imagery echoes in RELIEFS (Monkeys), a group of three-dimensional objects—five sculptures in various hues, seen on the ground and first floors of the exhibition. They are made of expanding polyurethane foam, a material used in the construction industry. The artist adapted this material for his sculptures by filling it into previously made silicone molds and allowing it to expand within, before removing the relief and working it further by hand. Therefore, each relief is unique with distinct characteristics: While some have a clearly visible jungle background, others have no background at all or only a hint of it; the same can be said of the monkeys, which are elaborated in variously abstract or very concrete ways. The sculptures’ frontal orientation is a formal reference to both the flatness of the original watercolor and features of classical reliefs. Each of the works appears on pedestal that (though ostensibly solid) is actually made of honeycomb cardboard and only appears to be as stable as a typical wooden sculpture base. RELIEFS (Monkey 24), a variant of the monkey series, represents an exception. Although also a three-dimensional, sculptural work, it is hung on the wall and thus oscillates between the lithograph in the reception and the freestanding sculptures, linking the two mediums.

Joining the reliefs are approximately 20 groups of cans, each varying in numbers, from the artist’s CANS, BAGS AND BOXES series. Made of painted cardboard, they are also placed on or in pedestals of various dimensions, appearing either individually, in pairs or combined into small groups. The cans are lacquered with gloss and matt paint, carved or decorated with patterns. Here the artist explores forms inherent to ordinary food packaging, the kind found in any supermarket or household. He creates new versions of familiar objects and shifts them to a new environment, interrogating the sculptural significance and artistic value of their formal design in a humorous way. The contrast imbues the works with a certain complexity: mundane and extraordinary, abstract and representational, disposable packaging and work of art.

This same celebration of the everyday is also present in COLLAGES (Wir Ungestalten), two works of which are installed in the staircase between the ground and first floors of the gallery, acting as an intermediary between the spaces. They consist of mainly black-and-white photographs that Fischli took on nighttime forays through the city. The works are composed of multiple layers of photos that evoke a haptic, three- dimensional sensation, once more alluding to the notion of the sculpture and relief.
The oft-abstract collages show markings or “tags” made from white shaving foam. Scrawled by persons unknown, they appeared in public spaces around Zurich including park benches, building facades, cars, and houses. It is a latently aggressive yet ephemeral kind of rebellion, as the mark is only visible for a moment before it dissolves—a poetic reminder of transience. The micro-vandalism is less an act of actual destructiveness than an act per se—a collectively planned and executed intervention that says, “I was here!”1 The mark becomes a signature.

Fischli’s new work Planet People Profit takes the form of an artist’s book. Pictured are snapshots of self-help books and personal optimization guides, many taken in a newsagent’s at London City Airport. All entice readers with the promise of optimization in various areas of life and work: more productivity, more money, more success. These key (yet ultimately superficial) contemporary values make such meaningful goals as health, fulfilment, and satisfaction seem secondary.

Peter Fischli (*1952, Zurich) and David Weiss (1946–2012) met in 1977 and began collaborating as Fischli Weiss in 1979. Their work has featured in many prominent solo exhibitions around the world. Exhibitions of Fischli’s solo practice since 2017 include presentations at Kunsthaus Bregenz (2020) and Aspen Art Museum (2017). Selected group exhibitions include Continuously Contemporary, Museum für Gegenwartskunst, Basel (2021); Ice and Fire, The Kitchen, New York (2020); and Summer of Hesitation, Kunsthalle Zürich (2020). Fischli curated the 2018 exhibition If Everything Is Sculpture Why Make Sculpture? Artist’s Choice: Peter Fischli, at MoMA’s Sculpture Garden, New York, and STOP PAINTING at Fondazione Prada in Venice in 2021.