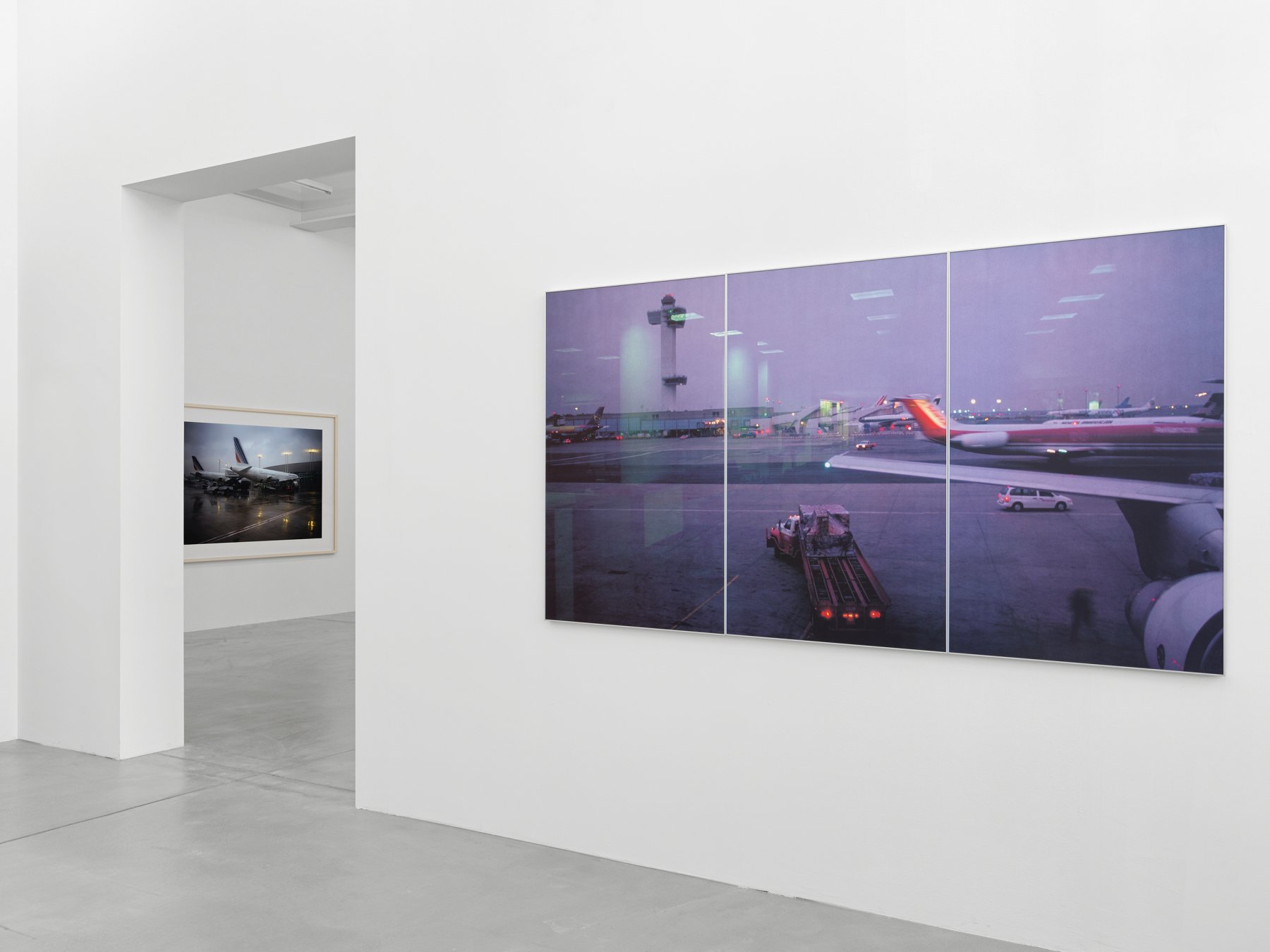 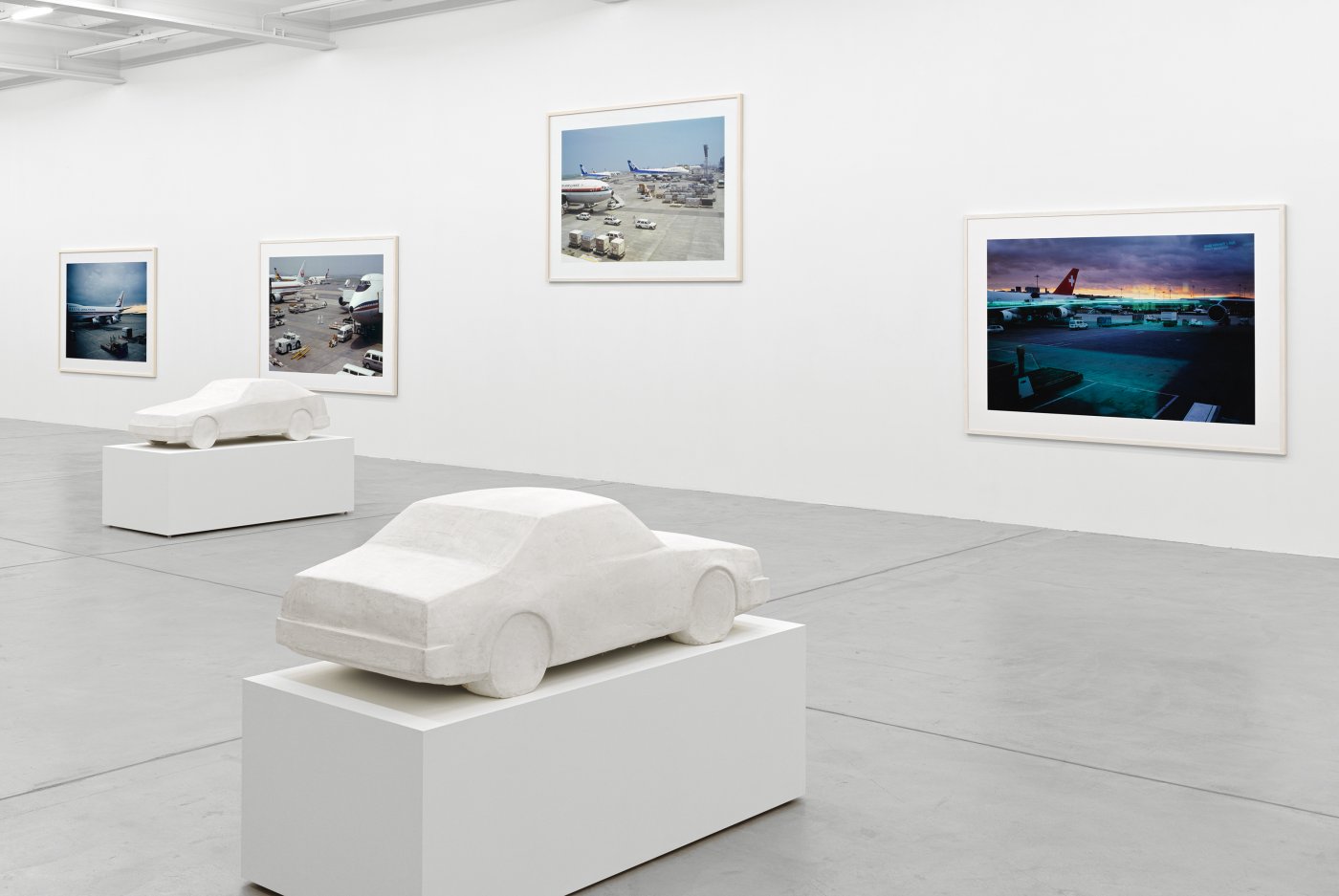 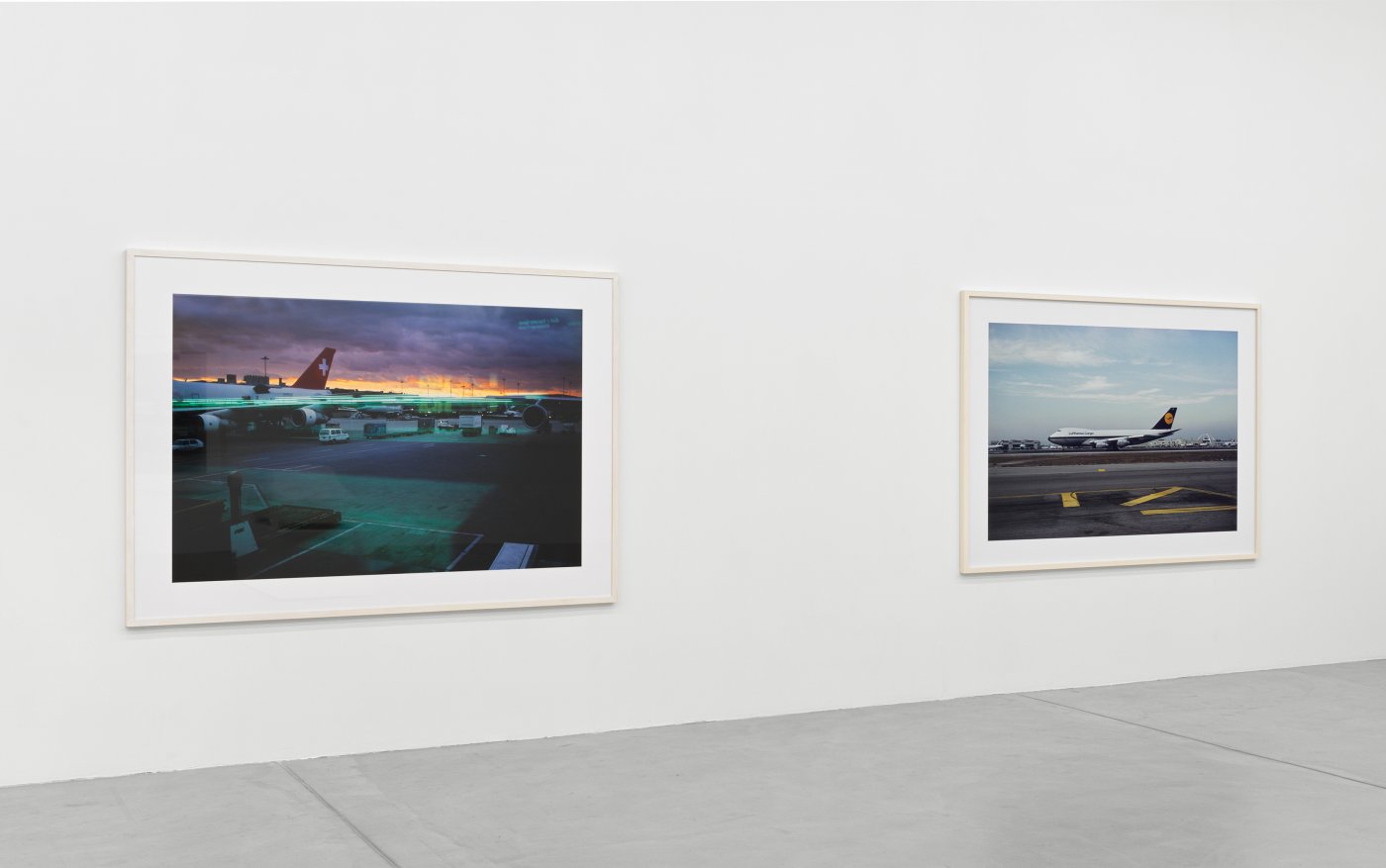 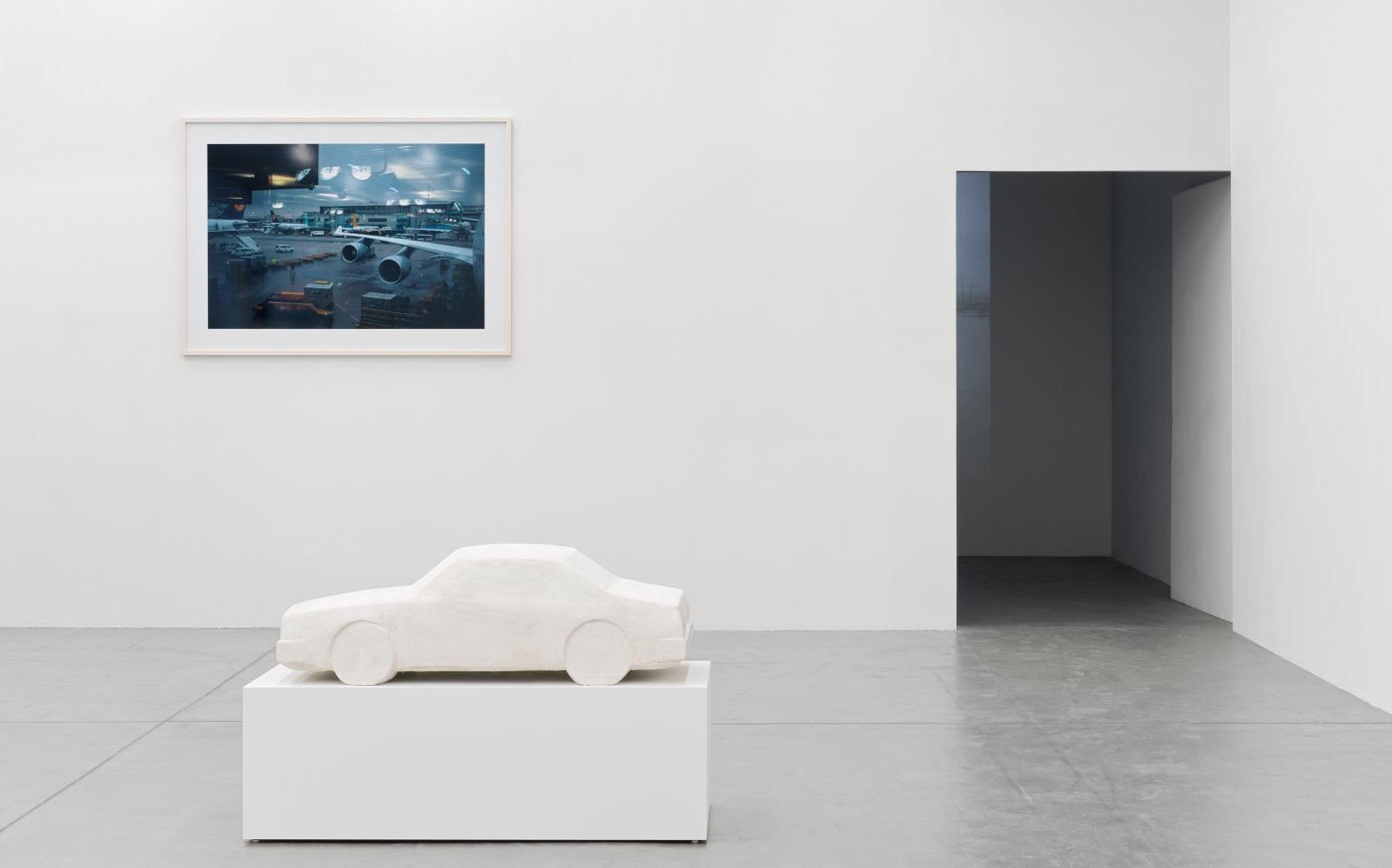 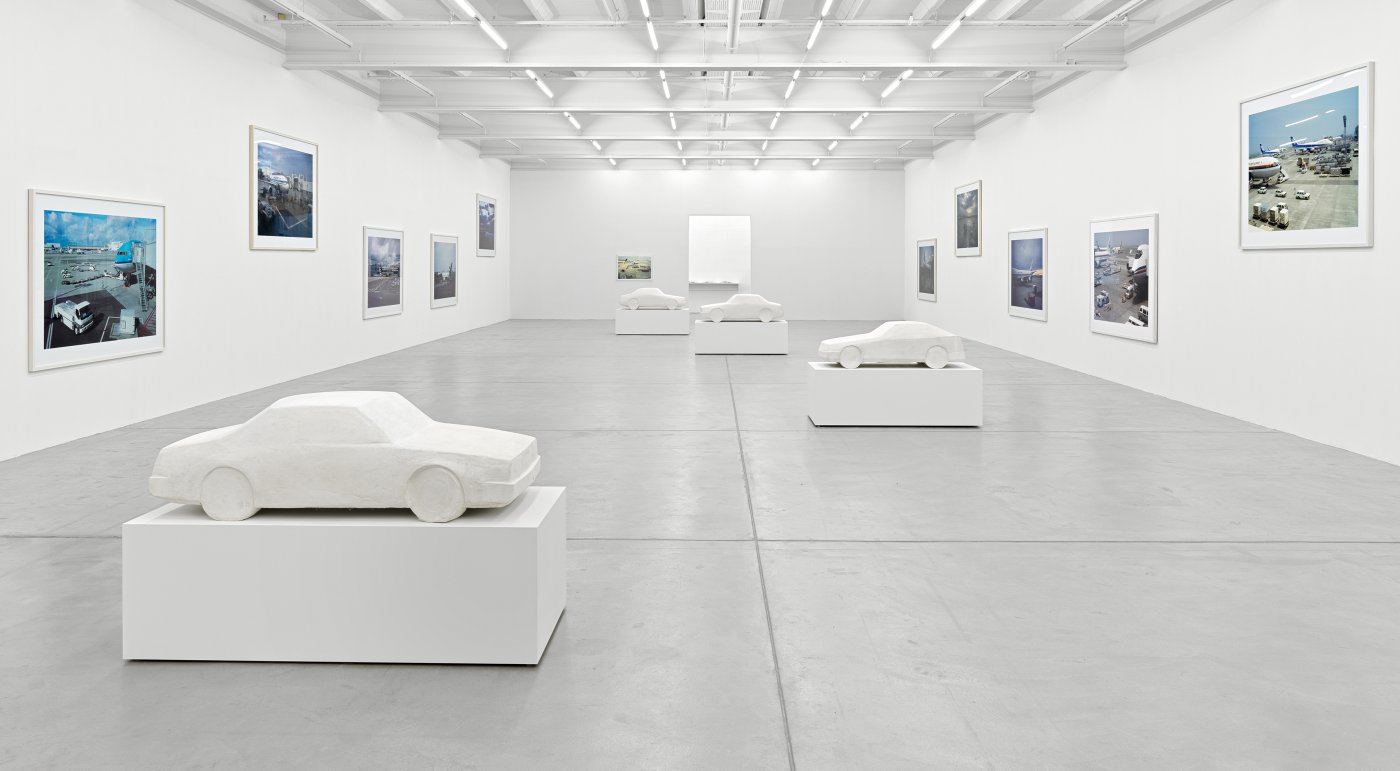 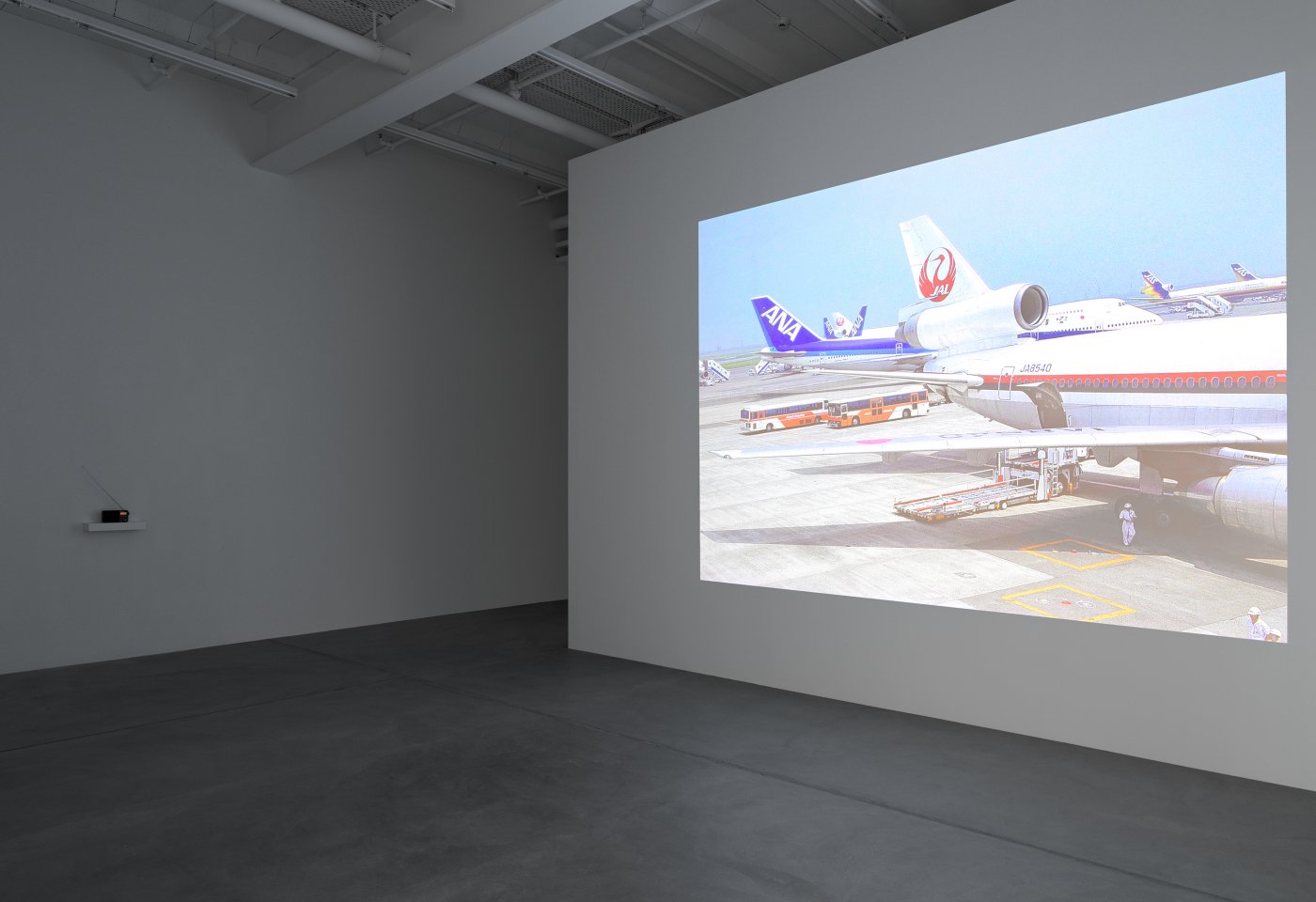 Fischli Weiss began the Airports series in 1987 and continued it for 25 years. The first photographs were taken at a time when the notion of photography as art was gaining traction—partly due to the Düsseldorf School of Photography, members of which Fischli Weiss were in dialog. Artistic positions were established that presented documentary photographs as tableaus in exhibition spaces. Similarly, the Airports have a structural affinity to easel pictures in size and presentation. However, the pictures rarely appear monumental; they were taken casually and manage without formal composition. The series has also been presented as a slideshow and two artists’ books (the first with 40 photographs in 1990, the second with 800 in 2012). In its pictorial rhetoric and form of distribution, the Airports series can be linked to photographic projects of early conceptual art—such as Twentysix Gasoline Stations (1963) by Ed Ruscha or Homes for America (1966–1967) by Dan Graham.

Fischli Weiss did not focus on the immediate surroundings of the passengers inside the airports but primarily photographed the tarmacs and loading zones—the abstract-opaque logistical space, which passengers predominantly glimpse through panes of glass and see themselves detached from. There are reflections in numerous works that proliferate the pictorial space. Some were captured in the rain; grey-blue tones dominate, and condensation and rainwater on the windows cloud the view. In other photographs, prototypical holiday images of sunsets and sunrises creep into the mundanity of the transit space. Duty-free zones, security and passport controls, travelers, and staff are not depicted. The airports seem ghostly at times. An impression reinforced by the recent caesura in global passenger transport.

The works show architectural spaces that the anthropologist Marc Augé described as non-places in 1992. Airports, asylum centers, highways, and malls are considered by Augé to be the paradigmatic places of globalized late capitalism. They are transitory functional places and not historically evolved spaces. Non-places are determined by economic transactions and contractual relationships. They are highly regulated special legal zones. They form an anonymous, generic space in which the social identity of individuals and the experience of time dissolve. The artists have examined the airport in its moral-aesthetic ambivalence and also documented their own reality as internationally exhibiting artists. The art market—as well as the institutional art world—is closely linked to transit spaces and stands outside territorial ties. Galleries and museums can be described as part of the economy of non-places.

The Airports series seems to be the counterpart of the series of works titled Visible World and—as a historical source—tells of the changing social significance of flying. The project did span a generation. The ecology and mobility debates—but also the aviation industry itself—have changed considerably since the beginnings of the series of works. There are few aircrafts from discount airlines in the series, but some from airlines that went bankrupt in the 1990s. The first works were created at the end of the golden age of airlines in the post-war order when aviation was associated with worldly sophistication, national pride, and civilizational utopias rather than terrorism and global warming.

Cars underwent a similar symbolic metamorphosis and can be seen in many of the photographs in the exhibition, providing the viewer with geographic and historical context. The Cars plaster sculptures do not reproduce specific models and are presented as isolated, prototypical fragments of the everyday order. This phenomena is presented without judgment; rather, there seems to be an emphatic turning towards these symbols of the “wrong life.” A small radio on a console plays content from a local station in a loop, conveying the impression of a specific, local reality—outside, beyond the gallery.