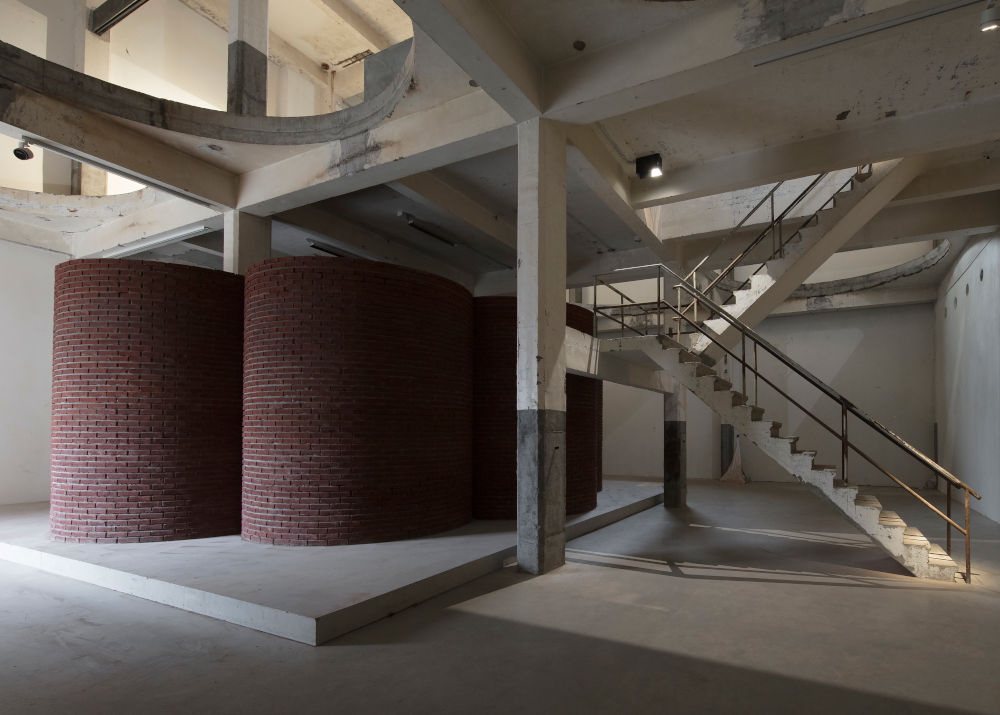 Why Bricks? I do not know. But I cannot do it with other materials. I have tried. I lie on the couch for a moment and am back in my childhood. Bricks everywhere. The Grundtvig church and its surroundings. The council housing from the thirties and forties—which for me, still represent the peak of Danish architectural achievement. Train journeys in the summer holidays with a ticket hanging around one’s neck. The brick station buildings. The railway towns… It is the mood, the brick’s load of memories and stories… other gains were color, light, the concentration of the fantastic, organic material… aesthetic aspects of a far too pleasurable character.
Per Kirkeby

Kanaal’s Escher Gallery features one of Kirkeby’s monumental unrealised projects for the city of Nordhorn as an elemental structure of eight adjoined cylinders clustered around a central accessible core. Nordhorn (1991) is a vast sculpture that measures almost eight and a half meters in length and width and with a height of three meters. It stands boldly in the Escher building as a counterpoint to the vivid architectural space created by the original industrial designer as a once-functional series of square and round spaces with cut-outs in the multi-level concrete structure. The experience of the work is physical—walking into each of the seven chambers, walking into the core, sensing the play of light and shadow, enclosure and mystery—leading to a new field of attention.

Trained as a geologist, Per Kirkeby became a romantic and heroic abstract Nordic painter, yet he is best known for his brick sculptures that he created throughout his career from 1966 till his death. Some of these brick works have been made for historic exhibitions and public forums like Documenta, La Biennale di Venezia, as well as museum and gallery exhibitions throughout the world. His wider artistic practice included painting, drawings and watercolors, bronze sculpture, printmaking, writing, performance, and film work.

One part of Kirkeby’s brick works are these singular sculptures. A second part is the two dozen unrealised large-scale projects, like this one, that Kirkeby made for public commissions and museum projects, but for one reason or another, these were never built. The third part of his brick works oeuvre include permanent installations and commissions, e.g. the untitled sculpture realised in Middelheim Sculpture Park, Antwerp in 1993 for the exhibition ‘Nieuwe Beelden’, created on the occasion of Antwerp, European Cultural Capital. These three groups will make up a three-volume catalogue raisonné of the brick works now in preparation with Museum Jorn, Silkeborg, Galleri Susanne Ottesen, Copenhagen, to be published by Walter Koenig Verlag.

The total oeuvre of Kirkeby’s brick works hold a particular position in the history of European Minimalism; the first works in 1966 appear at the same time as the Americans Carl Andre, Sol Lewitt, and Donald Judd began their investigations into industrial materials and shapes to suggest another way of looking and experiencing a new singularity of form.

Like the work in Middelheim Sculpture Park, Kirkeby’s large works insist on participation and engagement on every level from the viewer. These grand works, which hover between sculpture and architecture, use the simplicity of bricks and the sturdy elegance of straight lines and curved planes in tangible enchantment.

Only a great artist can use scale and material with such ease and candor, showing us how to look again, and how to sense space and void.

Realised in collaboration with the artist’s longtime collaborator for the brick works, Arne Fremmich and jsvc Projects, London.

Courtesy the Estate of Per Kirkeby and Galleri Susanne Ottesen, Copenhagen

With the support of Wienerberger Nv.