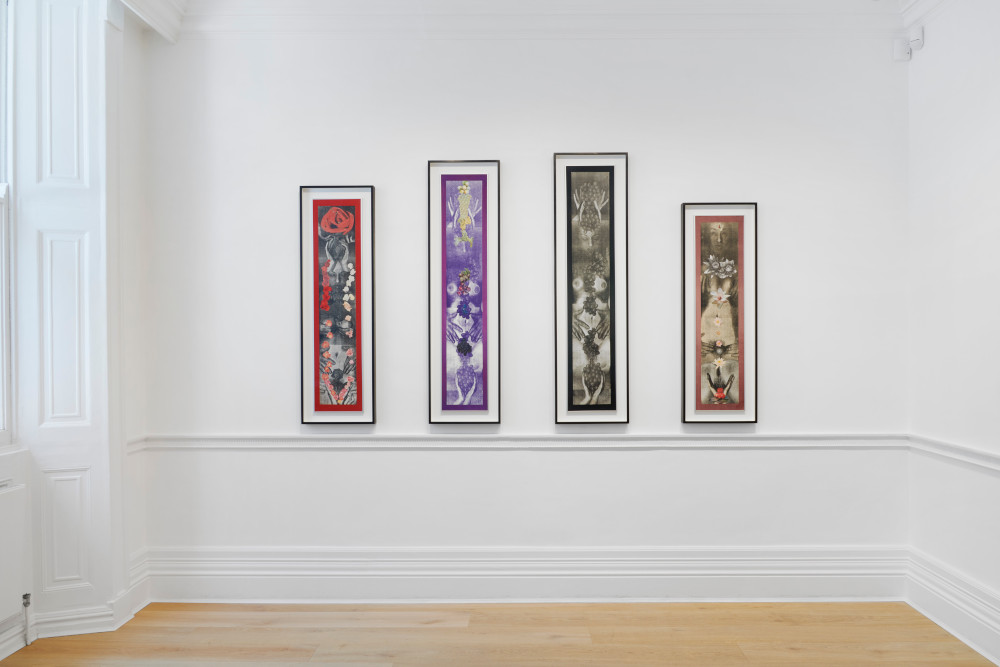 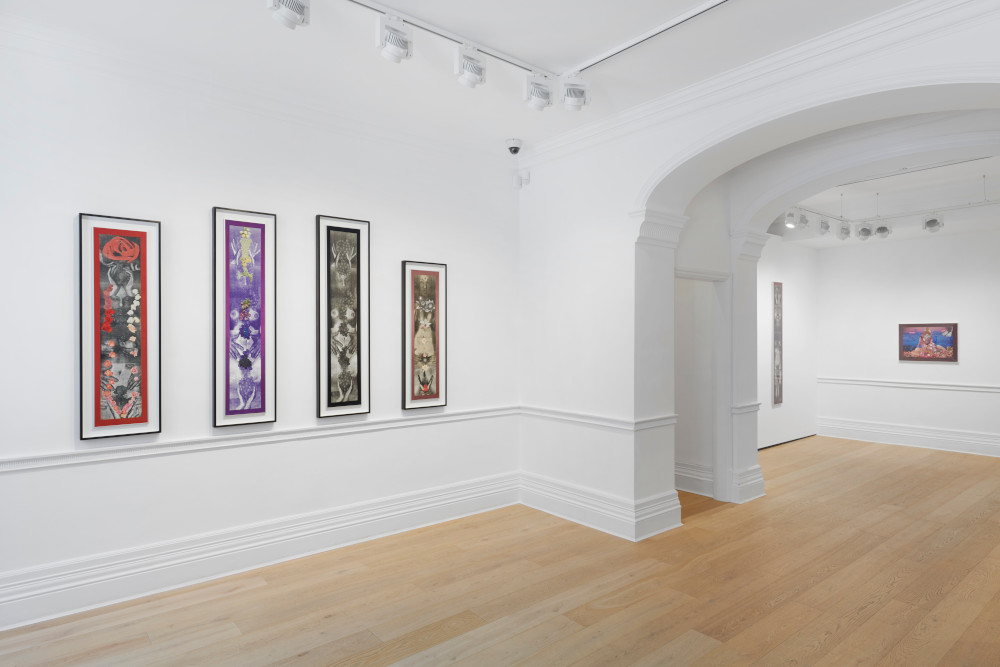 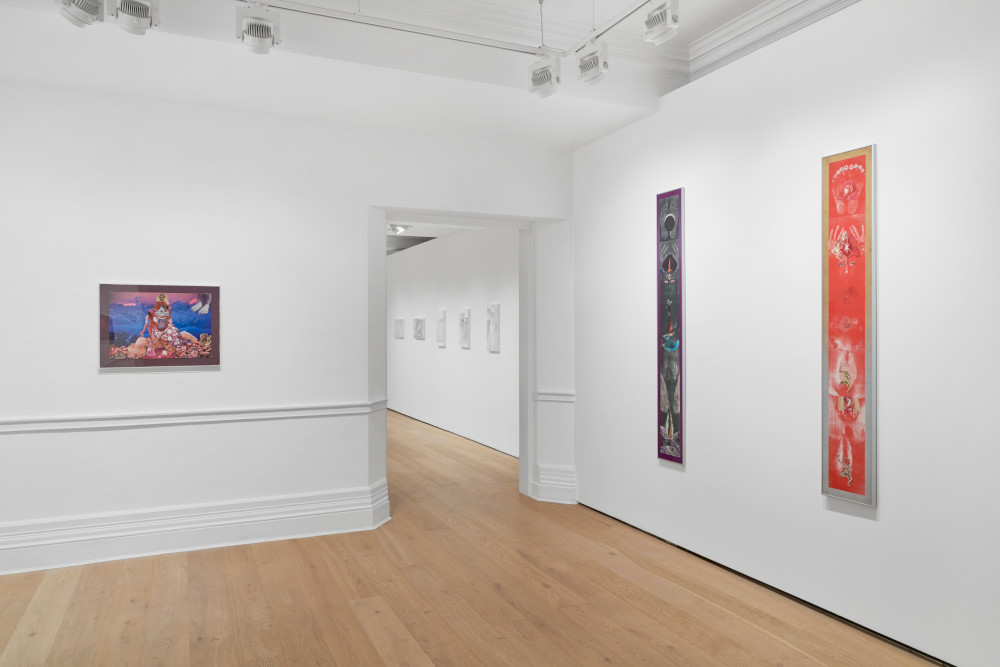 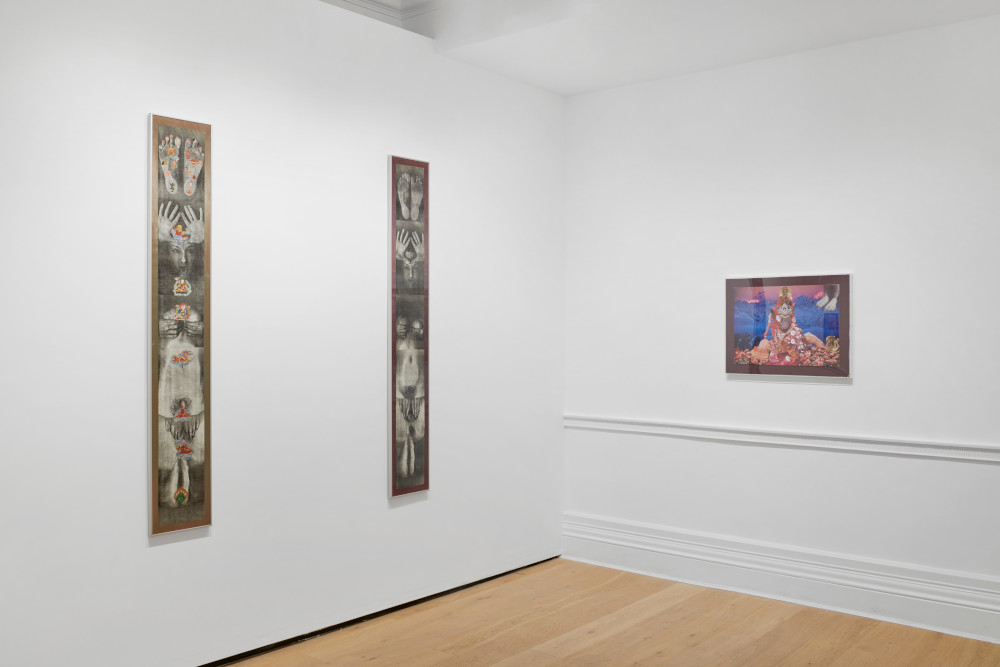 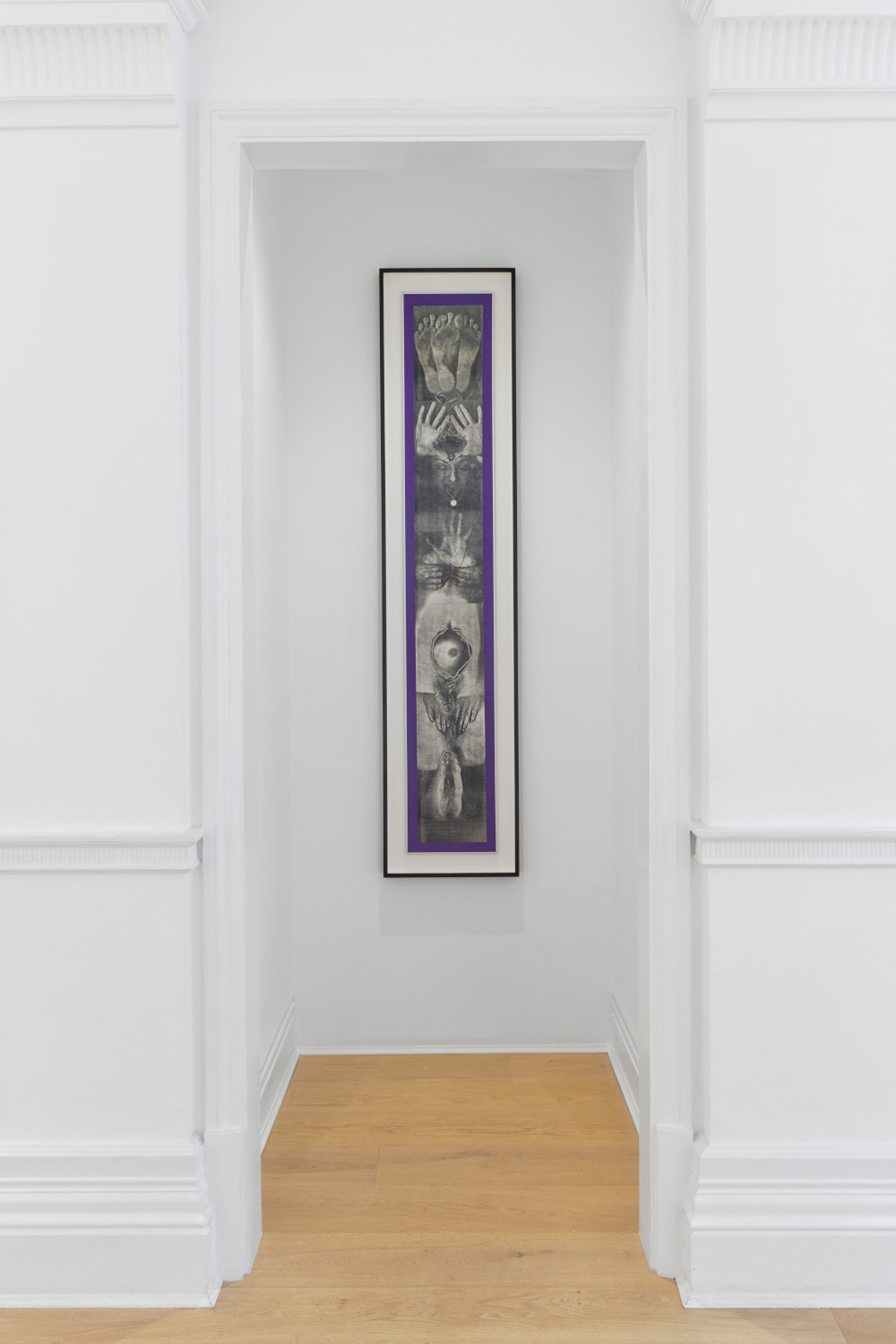 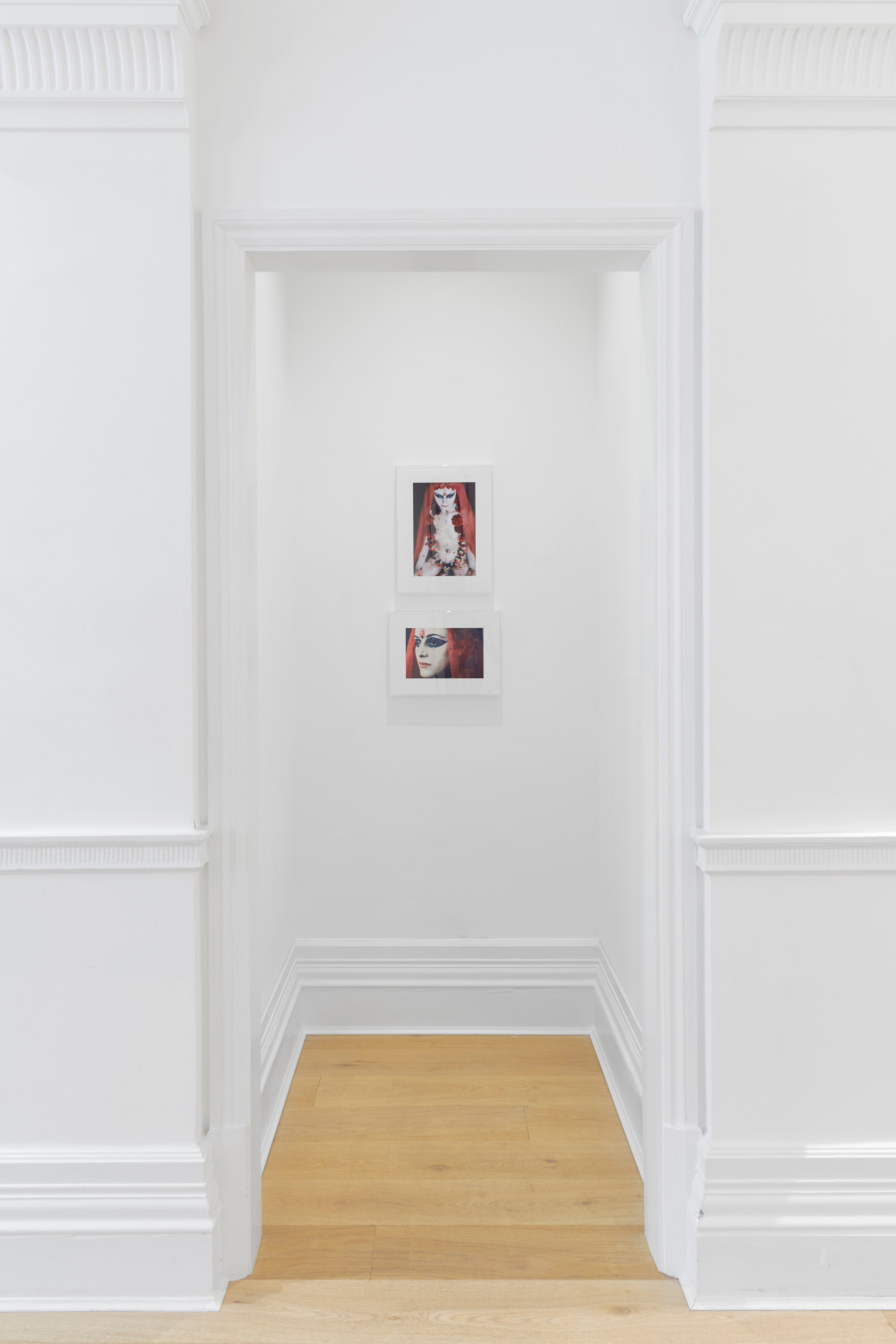 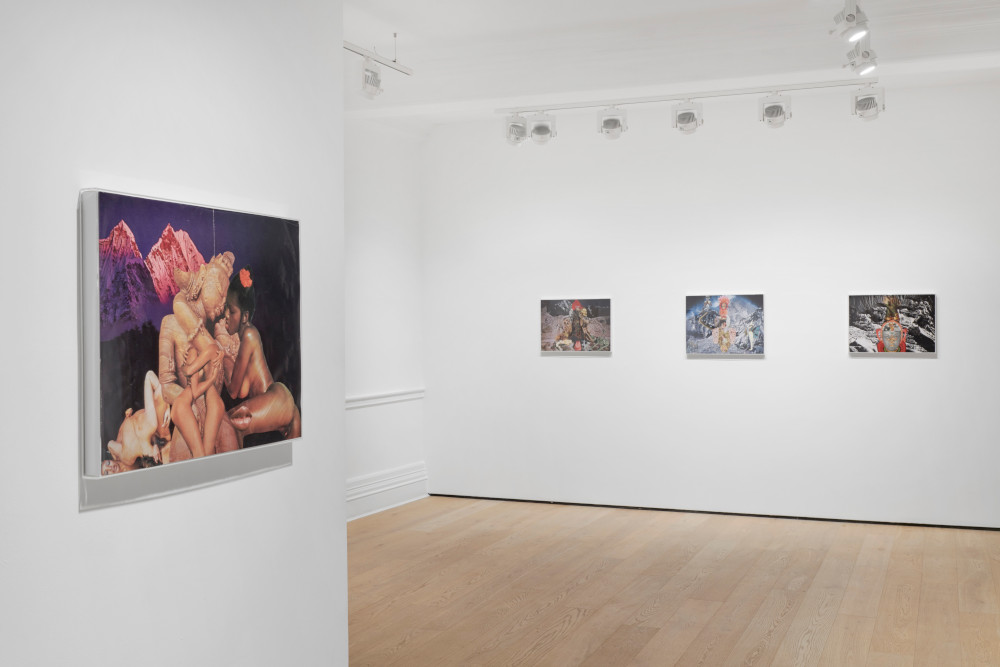 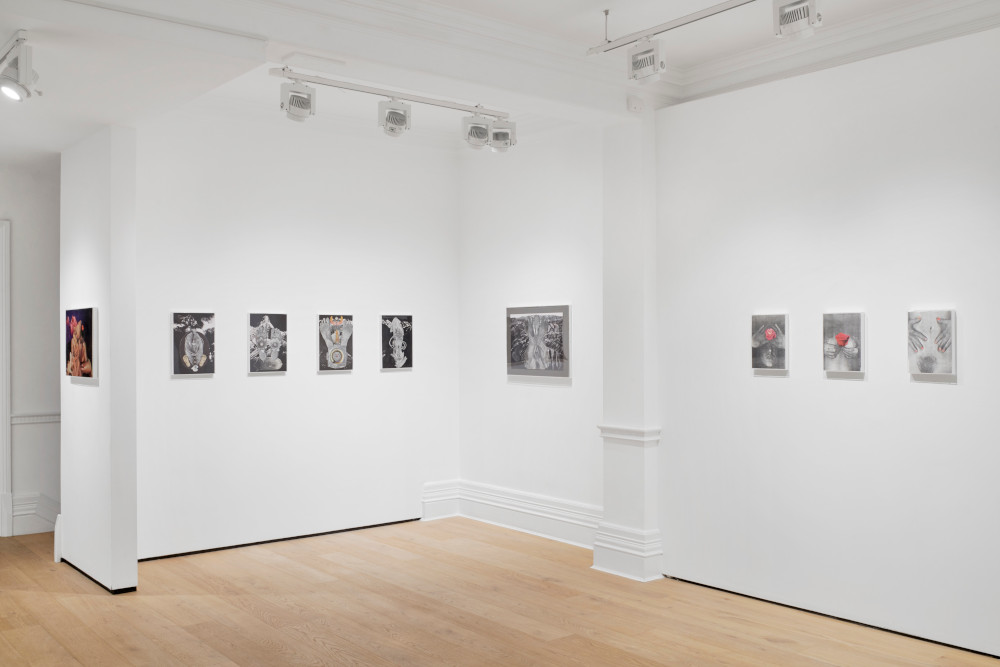 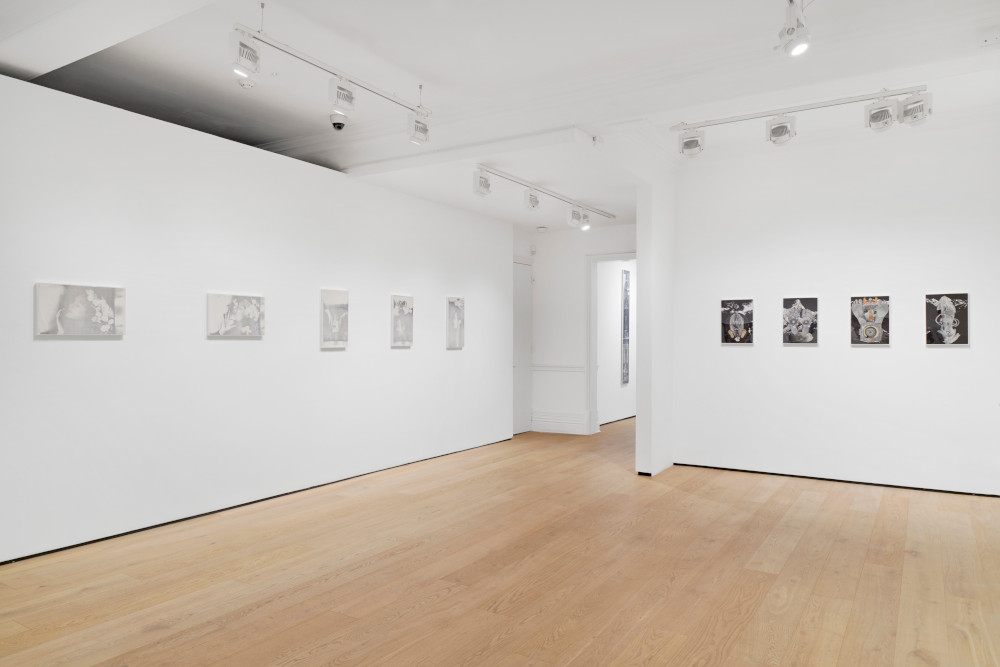 The work of Penny Slinger awakens your desires. A self-proclaimed “Feminist Surrealist”, her work combines the mythical qualities of Surrealism with the radical feminism of the 1970s – all underpinned by her long- standing interest in erotica, pleasure and the reclamation of the female body. Her exhibition at Richard Saltoun – her first with the gallery – celebrates the artist’s interest and development of Tantric art, featuring collages from the mid-1970s, Xerox body prints, vintage and new photographs created especially for the show.

Slinger was first introduced to Tantric art through the exhibition ‘Tantra, the Indian Cult of Ecstasy’ at London’s Hayward Gallery in 1971. The experience changed her life and forever altered the direction of her work: “I saw a Yantra (mystic diagram) dedicated to the Goddess Karli and understood abstraction for the first time. I recognised the visual language of the exhibit, being entranced by animal-headed beings and figures whose energy centres (chakras) throbbed with mystic energy. I felt that Tantric iconography represented the evolution of Surrealism.” As she sought to discover the secrets of Tantra, she met Nik Douglas, an authority in the field, with whom she co-authored Sexual Secrets: The Alchemy of Ecstasy, a definitive study on sex and mysticism with extensive illustrations by Slinger.

Born in London and now based in Los Angeles, Slinger studied at the Chelsea School of Art, where she was heavily influenced by her exploration of Surrealism, her friendship with Roland Penrose and association with Max Ernst. “Having discovered the magic of surrealism, I wanted to employ its tools and methods to create a language for the feminine psyche to express itself,” Slinger explains on her website. After graduating in 1969, Slinger travelled extensively to undertake research. It was during this period, in the early 1970s, that she developed an increasing interest in the transformative aspect of Surrealism in relation to her interest in the ancient mythology and Eastern philosophies espoused by Tantra. Tantric art, in particular, offered her ways to transform the archetypal symbolism associated with female sexuality, which she achieved via multimedia collage.

Slinger’s early collages consisted of images of her body, taken by a copy machine at the Portsmouth College of Art where she taught. She used the college’s copier during her lunch breaks to make monoprints of her face, which resulted in the series Spirit Impressions, aptly titled due to the work’s ghostly appearance. Later, Slinger started using ‘found images’, taken from magazines and merged together, evident in works like Tantric Reunions or Offerings at Twilight (both 1976). These works in particular represented a shift: away from the artist’s own body, which she found liberating and healing, and towards an alchemy of pornography or enlightened erotica. The works were deemed so radical at the time that thousands of copies were burnt by British Customs en route from printers in Netherlands.

Her work with the copy machine later developed into the creation of a series of scrolls, Chakra Man and Woman. Inspired by ancient Indian paintings of figures depicting the tantric system of chakras, Slinger created the work by laying and twisting her naked body, as well as that of her partner Nik Douglas, on the Xerox machine. Some scrolls include only the original Xerox monoprint, while others were collaged or made into silkscreens. All employ Tantric symbolism.

In the early 2000s, Slinger moved onto digital collage. A digital reprint of an original portrait of the artist, taken by the renowned French photographer Mayotte Magnus in 1977, will also be on view. Bright red, Slinger poses as Red Dakini (or Vajrayogini), the tantric, fully enlightened version of the female Buddha. The work is as contemporary today as when it was taken, with its wild, mythic and sensual appeal reaching across both time and medium.

Out of the Shadows, a documentary by acclaimed writer and director Richard Kovitch, documents Penny Slinger’s life from the grey suburbs of Surrey to the art scenes of London, New York, Tokyo and Los Angeles. The film will be screened at the Institute of Contemporary Arts (ICA) in London on Saturday 29 June, with further tour dates around the UK listed below:

Penny Slinger: Tantric Transformations forms part of the gallery’s 12-month programme dedicated to supporting the work of female artists. Titled 100% Women, the programme aims to remedy the gender inequality that persists in the art world and encourage wider industry action through debate, dialogue and collaboration. 100% Women will pursue its mission through a combination of gallery exhibitions, art fair presentations, artist talks, a film and lecture series, external collaborations and digital exhibitions hosted on the gallery’s new online platform.