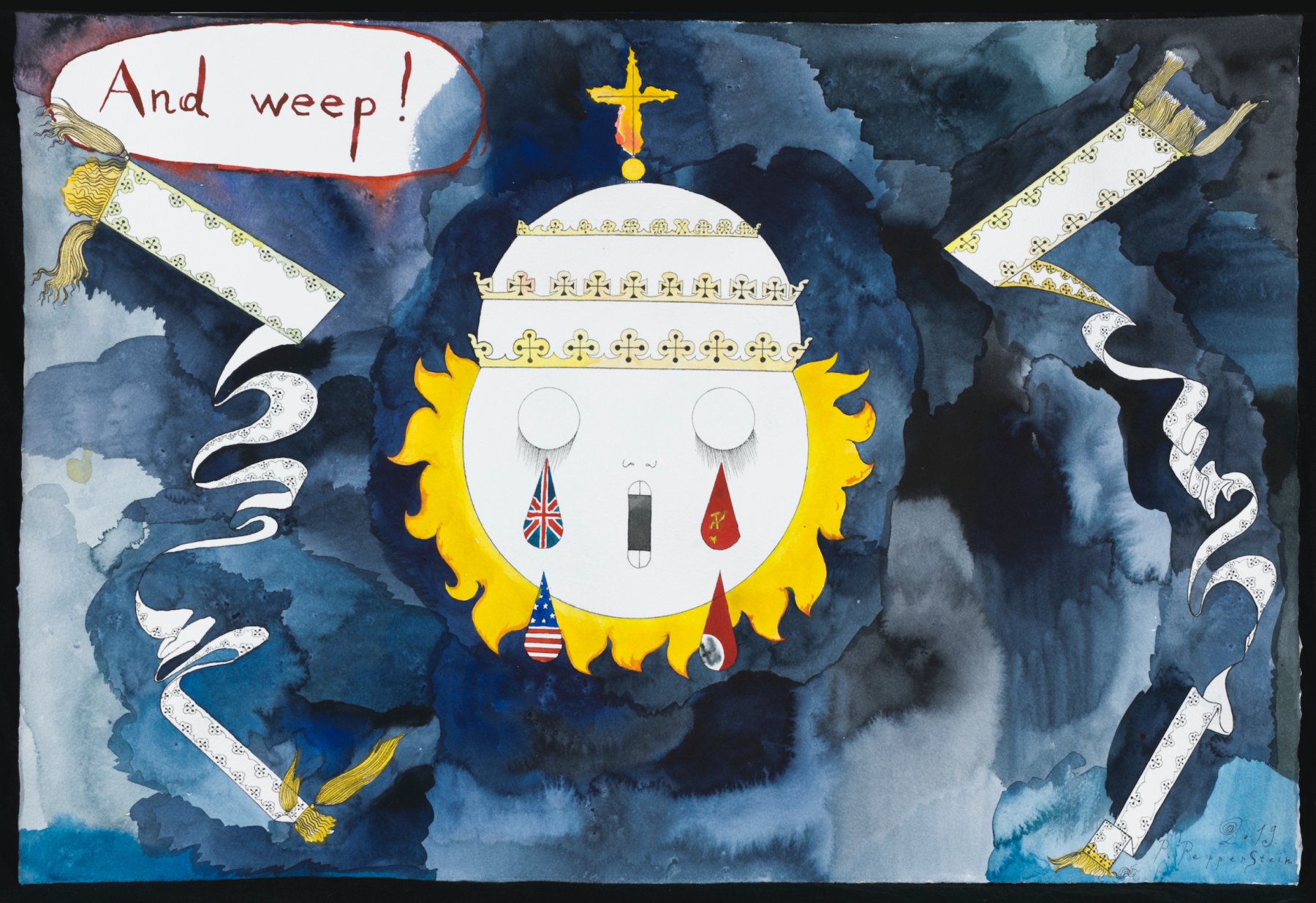 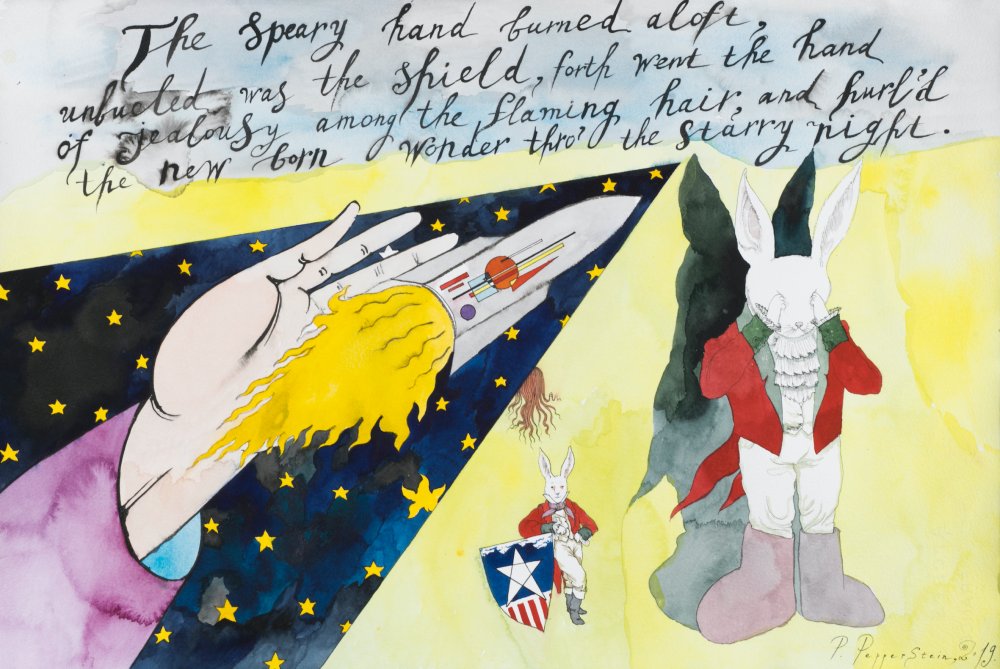 Pavel Pepperstein
The speary hand burnèd aloft, unbuckled was the shield; forth went the hand of Jealousy among the flaming hair, and hurl’d the new-born wonder thro’ the starry night, 2019 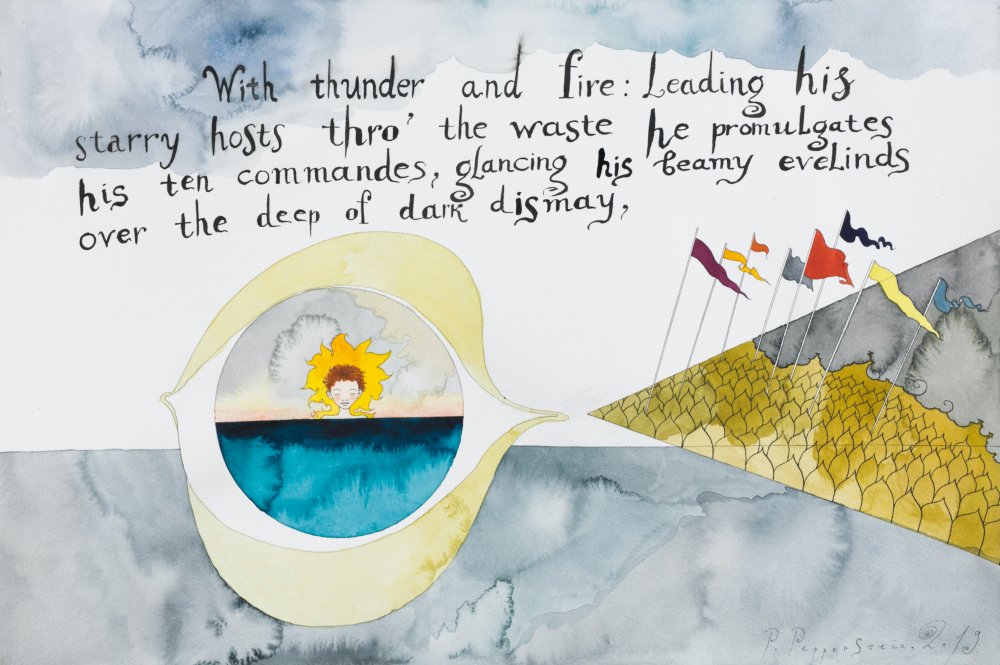 Pavel Pepperstein
With thunder and fire, leading his starry hosts thro’ the waste wilderness, he promulgates his ten commands, glancing his beamy eyelids over the deep in dark dismay, 2019 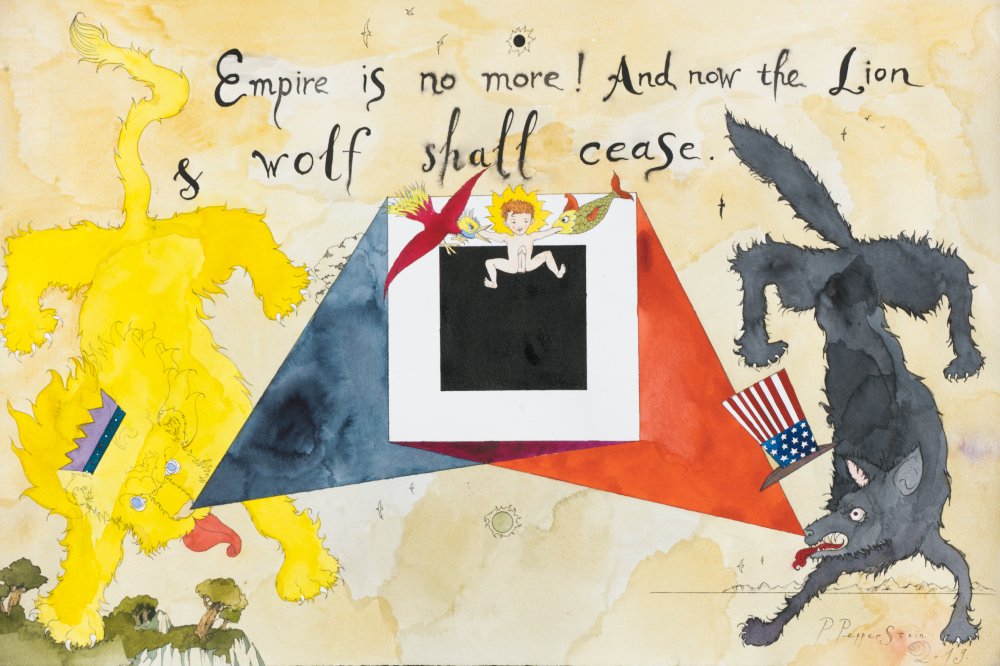 Pavel Pepperstein
Empire is no more! and now the lion and wolf shall cease, 2019 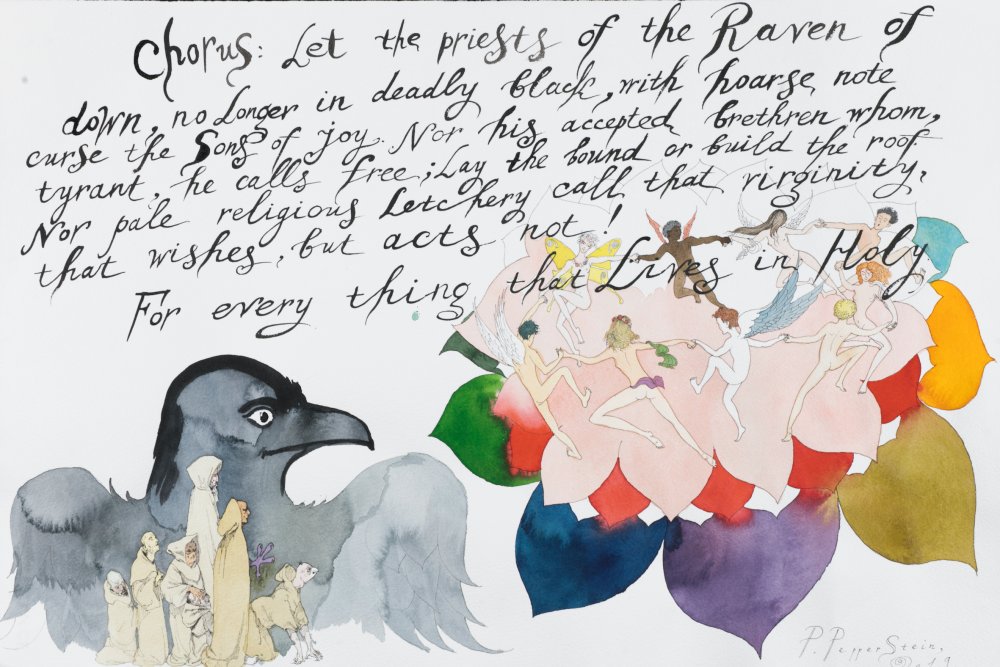 Pavel Pepperstein
CHORUS Let the Priests of the Raven of dawn no longer, in deadly black, with hoarse note curse the sons of joy! Nor his accepted brethren—whom, tyrant, he calls free—lay the bound or build the roof! Nor pale Religion’s lechery call that Virginity that wishes but acts not! For everything that lives is Holy!, 2019 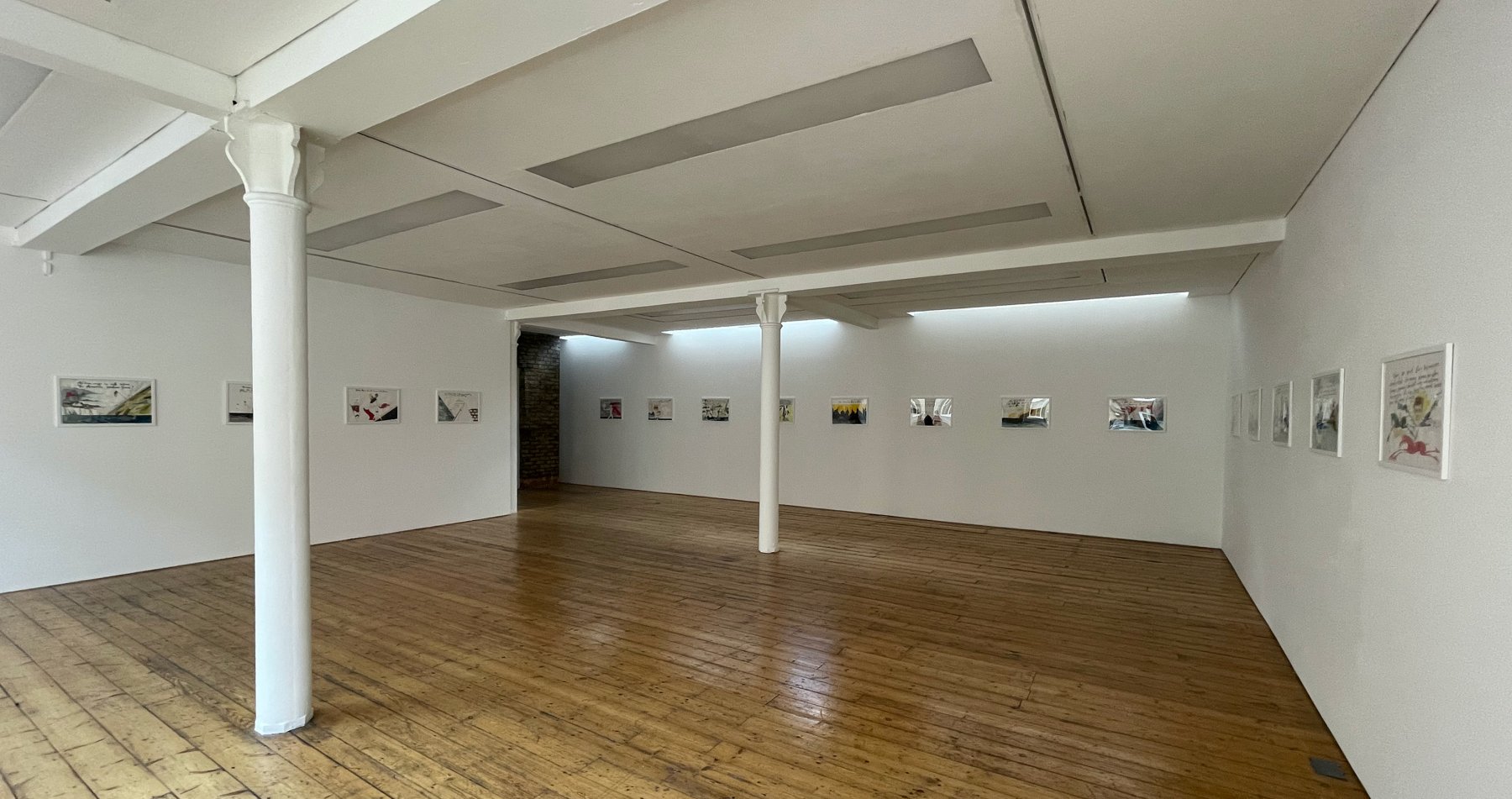 Song of Liberty consists of twenty-one watercolour illustrations of William Blake’s poem. The drawings illustrate images charged with a strong religious, satirical and political content. Mythological and historical figures, such as Albion and the Pope, are merged together under the umbrella of fairy tale and caricatural scenes. In Pepperstein’s graphic, painterly works, ancient mythology encounters avant-garde forms, to which the artist adds his own handwritten description element.

“There is something particular about William Blake’s poetry (magnificent, peerless, stunning, sectarian, flawed enough, and in a way even wretched). As far as I know, no one has ever attempted it (indeed, doing so would never have occurred to anyone) after he himself did it so magnificently. The author’s genuine and perfect illustrations of his own poems completely (it would seem, forever !!!) ruled out the possibility of letting shitty illustrators approach this sacral text.” (Pavel Pepperstein)

Both artists worked on the creation of their work during times characterised by important world changes (revolutions, wars and the upheaval of the global status quo). Although referring to a timeless masterpiece of the past, Pavel’s work is focused on the contemporaneity, leading the viewer to a modern-day analysis of the relations between nations, religions and cultures.

About the artist:
Born in Moscow in 1966, Pavel Pepperstein is one of the most influential artists of Russia. In 1985-1987 he studied at the Academy of Fine Arts in Prague and in 1987 he co-founded the experimental group of artists Inspection Medical Hermeneutics, which, after the dissolution of the Soviet Union, developed a critical approach towards the influence of western culture on Russia. Pepperstein had solo exhibitions at Garage Museum of Contemporary Art, Moscow (2019); Kunsthaus Zug (2017); Multimedia Art Museum, Moscow (2016); Musée d’Art Moderne et Contemporain, Saint-Étienne (2015); 5th Thessaloniki Biennale of Contemporary Art (2015) and Kunstmuseum Liechtenstein (2010). He participated in the Moscow Biennial (2017 and 2007); Garage Triennial of Russian Contemporary Art (2017); Manifesta, St. Petersburg (2014); the Venice Biennial (2009); and the Valencia Biennial (2003). Pepperstein’s work is included in public collections, such as the Centre Georges Pompidou, Paris; the Kunsthaus Zug, Kunstmuseum Basel, Switzerland; the Moscow Museum of Contemporary Art; the Sammlung Rheingold Art Foundation, Düsseldorf; and the Deutsche Bank Collection, Berlin.

Courtesy of the artist and Sprovieri, London