Ever-broader considerations of ephemerality, necessity, precariousness, utility, truth, ambiguity, time, light, place, space, form, material, volume, emptiness, autonomy, identity, lightness, levitation, and gravity are endlessly combined, propagating questions that are the genesis of what will become sculpture. By sensing that each element makes the other necessary, I may come close to something worth pursuing, despite the fact that what is necessary must be perpetually redefined. My leaving New York for Düsseldorf in 1992 was a deliberate act. Living and working in Paris since 1994 continues to redefine necessity. Notebooks accumulated in my studio over time are filled with words, thoughts, titles, annotated sentences, punctuation marks, but rarely sketches. Drawings appear in space in three dimensions, in the materials I have at hand. These drawings are the starting point for the sculpture to come. The sculpture must conserve the immediacy of the drawing and at the same time make us forget its origins, in a necessary relationship between control and circumstances beyond my control.
Paul Wallach

Jeanne Bucher Jaeger presents a new solo exhibition by Paul Wallach, who has been represented by the gallery since 2008. This exhibition, entitled Yielding Place, is a continuation of the artist’s three previous solo exhibitions in the gallery and exhibitions of his work in European and American institutions. 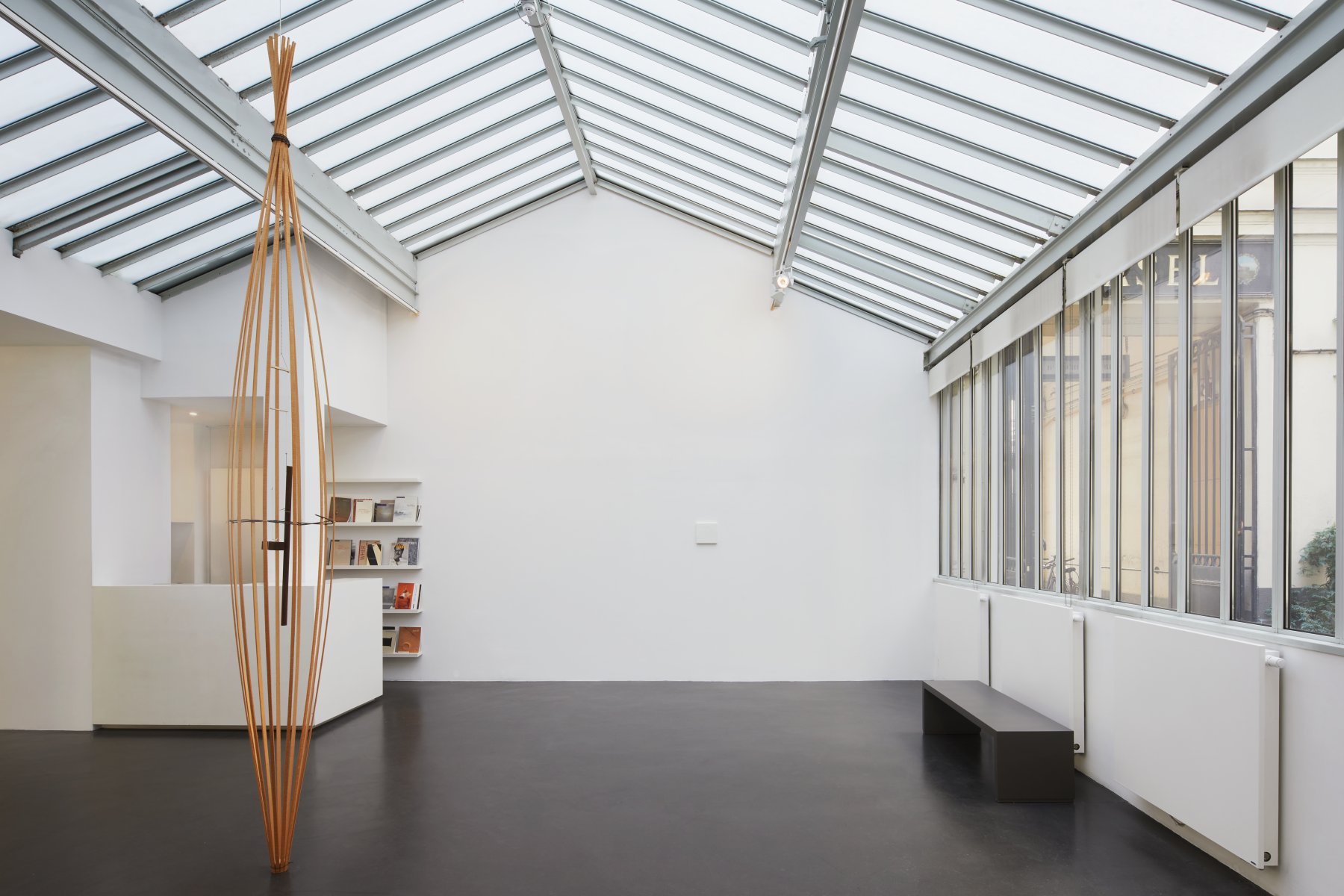 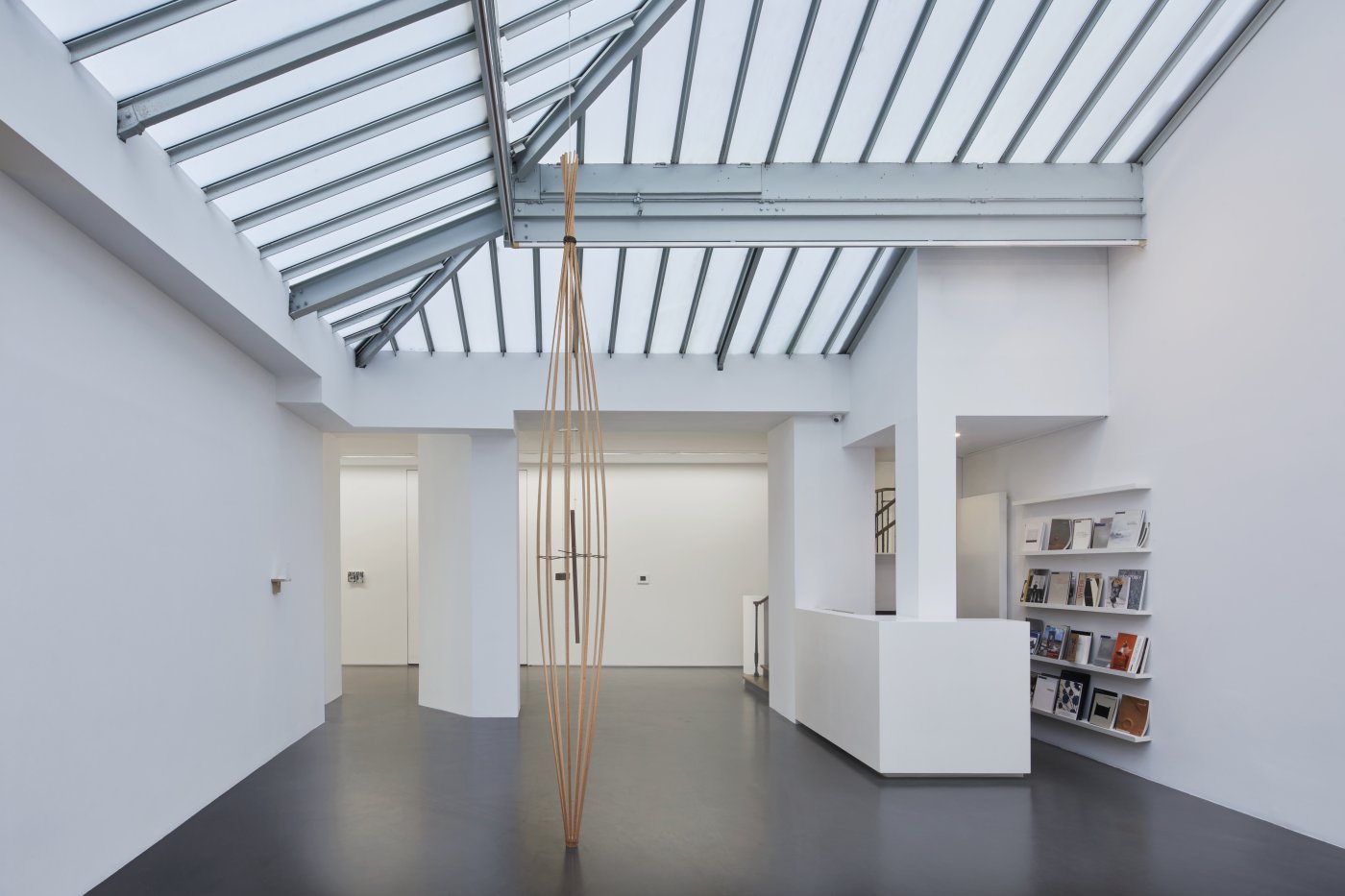 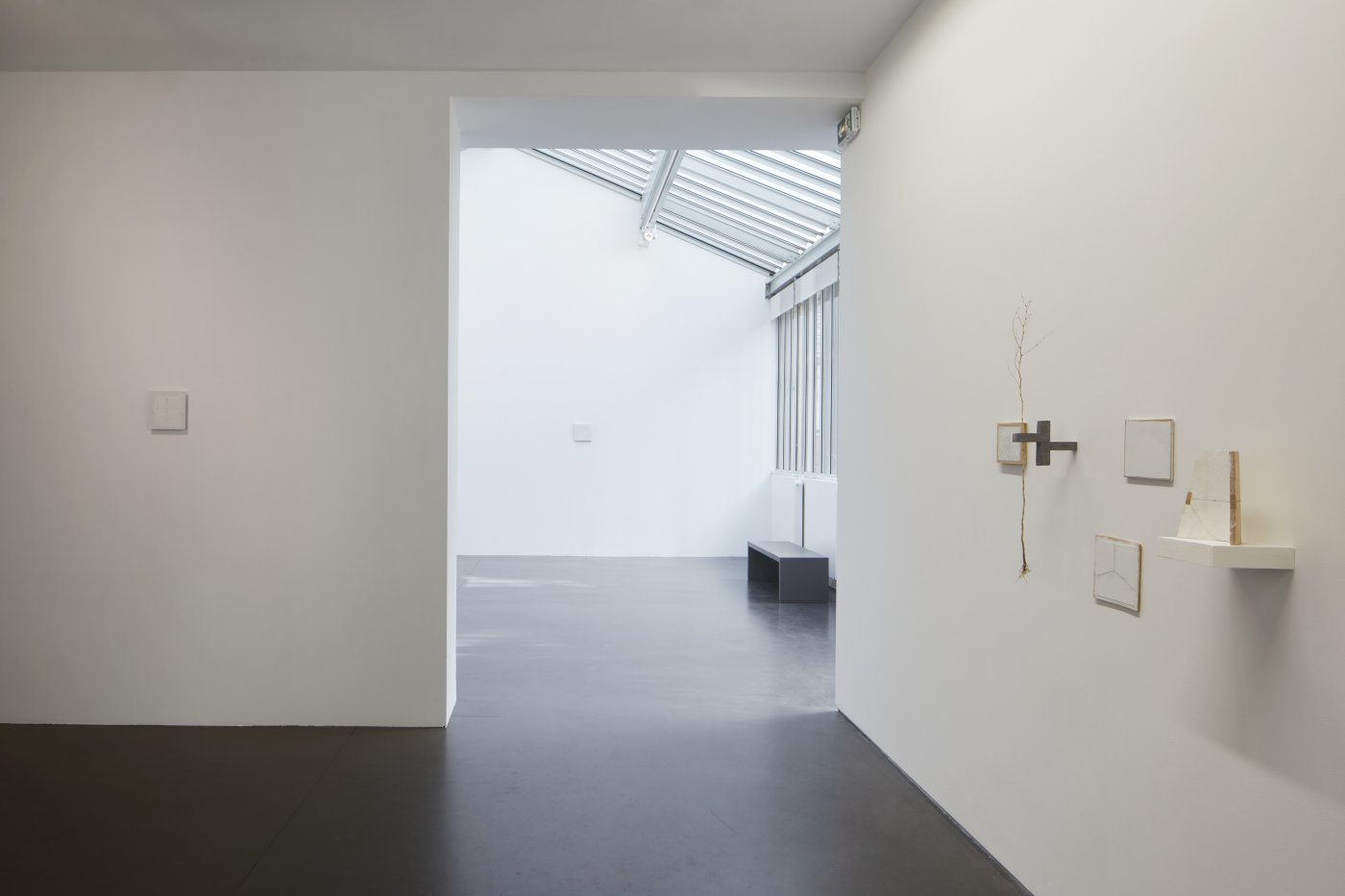 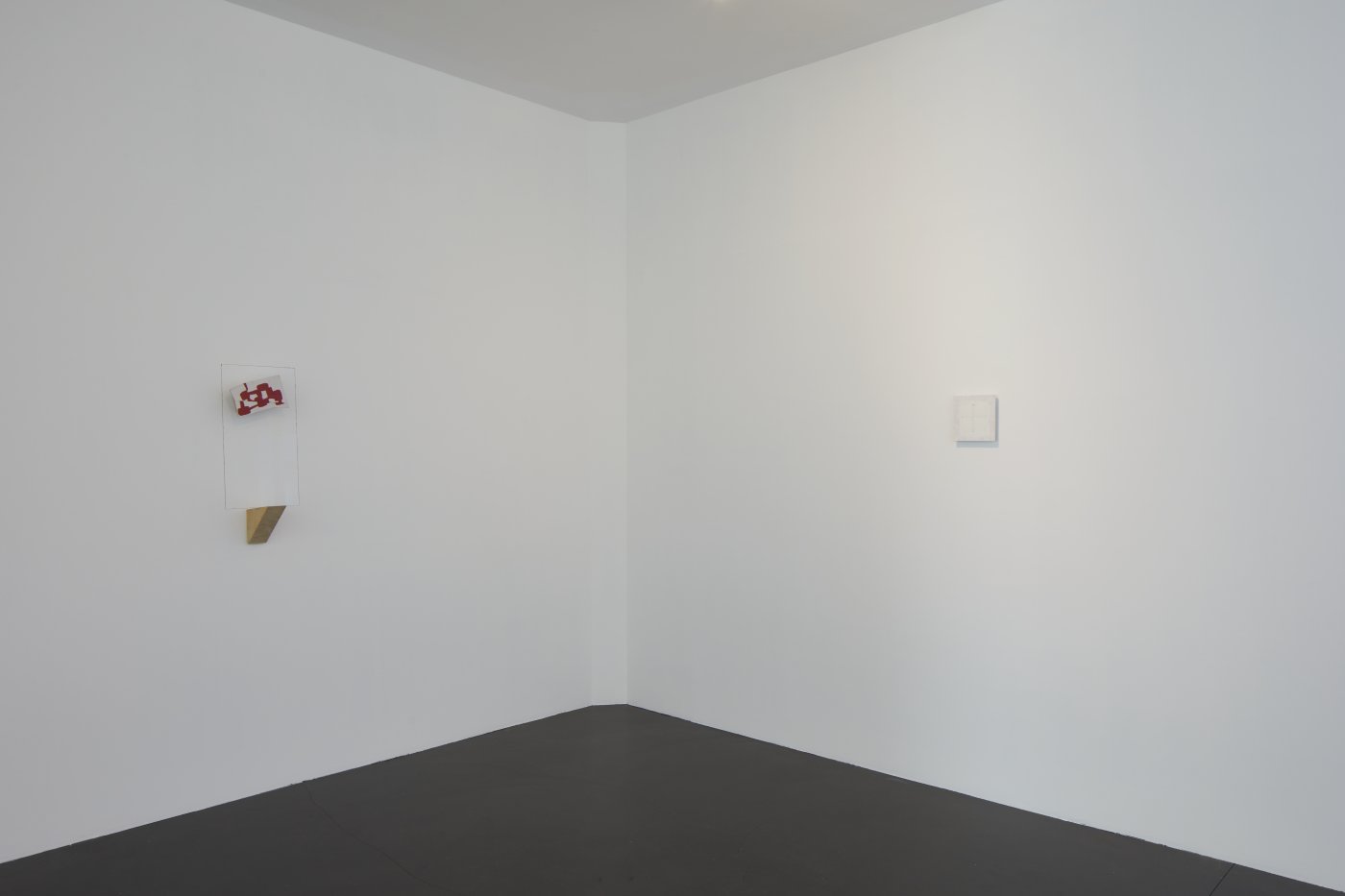 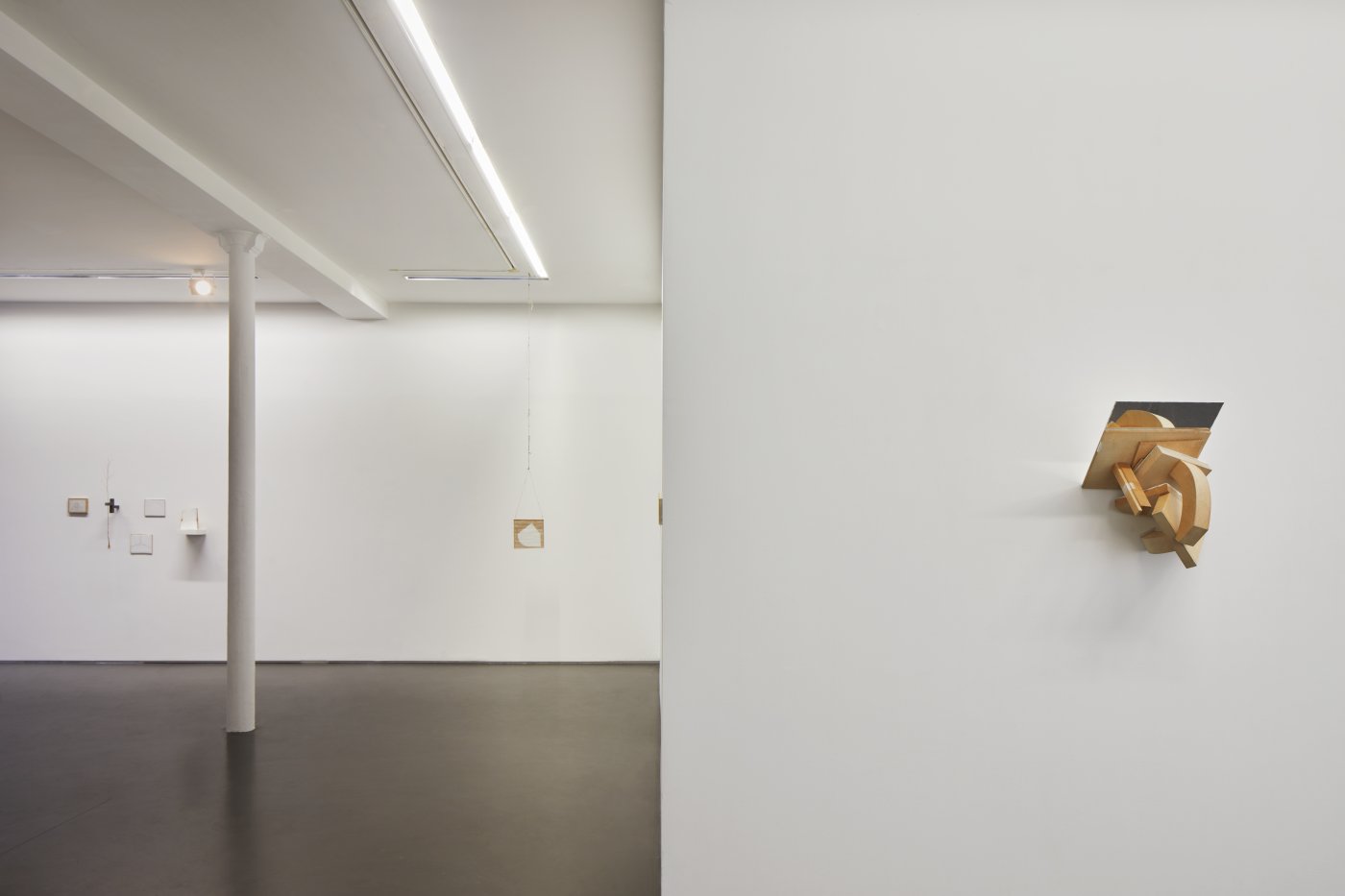 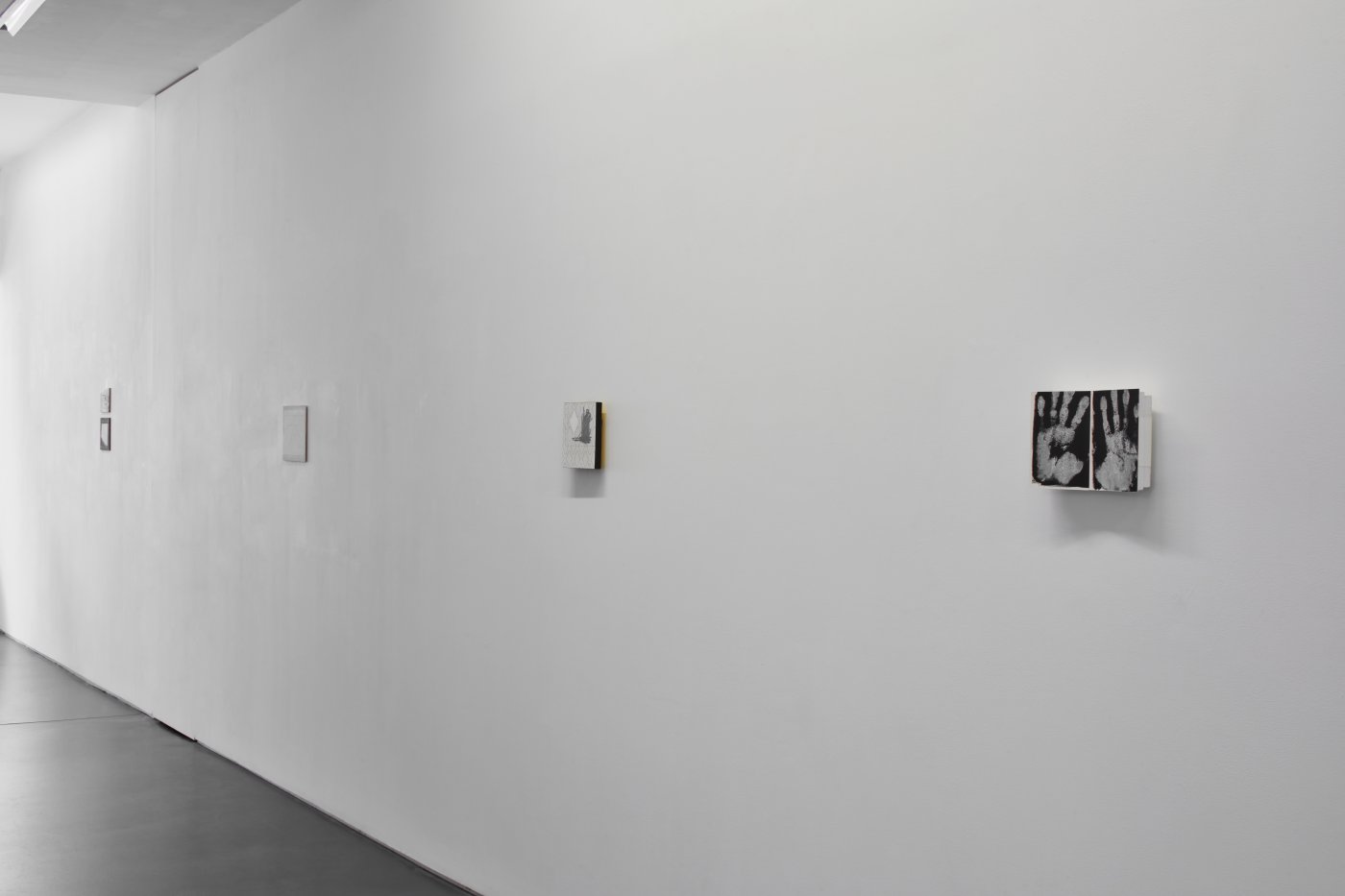 This new exhibition brings together a selection of recent works made in the light—and shadow—of the world events that have taken place since the pandemic began in 2020. The artist was deeply affected by this turmoil in his private life and existentially, and as an American citizen was also troubled by the situation in his native country, especially in the spring of 2020. Although color has at times sparingly appeared in his art, he felt compelled in these new works, which were born in the heart of chaos, to call upon white, with its limitless nuances. A return to the Essence, to Space, to Silence. An originary Simplicity. Recollection, renaissance.

This line by Alfred Lord Tennyson flows through Paul Wallach’s most recent creations, inspiring the exhibition’s title and the exhibition’s centerpiece, Yielding Place, at once a shrine to the memory of a world forever gone and an ode to effacement as a way of re-capturing otherness. The vulnerability of a thin, leafless branch is held by a regular cross shaped form cast in lead, its frail roots seeming to have just emerged from the ground. This is the first time that Paul Wallach has called upon the imagery of a tree and branch in a deeply symbolic gesture. The pure shape of the pyramid and its vanishing lines punctuate the exhibition, guiding the visitor toward Plus Lointain, which bears the imprint of the artist’s fingers, an assembly of white on white whose contours seem to emerge from the wall in order to better disappear into it. Effacing presence.
The exhibition opens with the work N’a de fin. Without beginning or end, from floor to ceiling, earth to sky, it is held together only by a string weighted by two steel elements that lightly strike against one another randomly, moved by a breath, ringing in silence. This work evokes La Madeleine, a sculpture imagined by the artist for the Chapel of Pluméliau (L’Art dans les Chapelles, 2015, Palais de Tokyo, Choices 2016, curated by Laurent Le Bon), the pure sound generated by the work itself, unfolding in a suspended space and time. N’a de fin was first created in 1993, in a version that was destroyed by the storm of December 26, 1999, having been returned to the artist’s Paris studio after being shown in Cologne—the roof of his studio ripped off by violent winds. The work disappeared, along with so many others. Some fifteen years later, Paul Wallach planned to create a new version for his solo exhibition at the Musée d’Art Moderne et Contemporain de Saint-Etienne Métropole in 2014, but from this initial intention, the work Être was created.
Born of disaster.
While the epidemic was unsettling the world as of March 2020, the artist was reminded once again of N’a de fin. Memory, and Mirror.
Mirror Mirror (2021) resonates with this finished and unfinished work in the gallery space. The mirror on either side of the work, in front of it and behind it, that which is carried out, that which is hidden from view, in an inclination that opens a perspective for the viewer that is usually impossible to define.
To that pure reflection of Light which, from the other side of the mirror, emerges on the wall. The Aura revealed.

Paul Wallach was recently invited to create a monumental installation marking the closing of the Kunstprojekt Krauthügel art cycle initiated by the Salzburg Foundation, after the artists Anselm Kiefer, Mario Merz, James Turrell, Anthony Cragg and Jaume Plensa… Inaugurated in 2018 and on display in Salzburg until 2024, Down to the Ground, the artist’s immense, four-pointed installation, is a star fallen from the sky into the heart of the landscape. While Paul Wallach changed the scale of his work, he continues to sculpt that which fits in his hand: air, its content and volume, and in this specific case, the fauna and flora around which the sculptural drawing comes to append itself without constraining or obscuring it. It also comes to sculpt a sense of expectation (…) (Laëtitia Bischoff)

Paul Wallach (1960, USA) began his career as an artist-in-residence with Mark di Suvero, with whom he worked in New York for three years. He then spent two years in Düsseldorf, Germany, before moving to Paris in the 1990s, where he continued to develop his highly personal conception of sculpture. From a vocabulary that was determined early on, his sculpture espouses lightness, caution in relation to monumentality, heterogeneity, a relationship with space in tension (Paul Ardenne).
While the artist’s three-dimensional constellations are born of sensitive and organic arrangements of different substances, his primary material remains wood, a raw living and sensual medium that transforms itself over time, reflecting the uncertainty, ephemerality and vulnerability of the natural state of existence. There is in his work a latent consideration of temporal processes, on temporality in general, as another plane of thought that is neither spatial nor material (Lóránd Hegyi). Since his early childhood, Paul Wallach has seen each tree as sculpture in its raw state and developed an intimate connivance with wood, which he uses in the form of strips and planks that, in an intuitive assemblage of fabric, plaster, string and, more rarely, metal, he transforms into a complex system of signs, mysterious and enigmatic fragments of a poetic truth.
In these weightless sculptures that carve air, space and time, sculptures that draw or drawings that sculpt, there emerges an intentional austerity, a revelation woven of Empty and Full.
Presence through absence.

The shadows inside the structure and projected on the wall seem to generate imaginary extensions, a kind of radiance of sculpted form (…) The aura of the hidden, of disappearance, of the invisible is conceptualized and revealed (Lóránd Hegyi).

In a noisy, diffuse era geared toward an overproduction of images and raucously glittering artifacts, I am all the more struck by the focused, silent, even ascetic, work of Paul Wallach. I admire its apparent poverty, the subtlety of its expression, and the banality of its materials pieces of wood and cloth, lengths of string, glue, and visible nails.) They have a singular way of working with each other and with the given space, its walls, air, light, emptiness…They don’t occupy it as much as they are occupied by it. They create space, making it immense, as if their presence expanded the room. I like the way their shadows, often almost white, stretch out, subtly marking a wall or the floor. (…)
His sculpture appears like a drawing in space, or perhaps more accurately , a drawing that creates, shapes, and modulates space. A drawing that generates space. The concern her is the space itself as much as the drawing that embodies it – and it’s a generous space, one that collaborates with light, as precise as it is open, a space that we’re invited to pace (the body figured within the figured sculpture) and even more, a space that we’re invited to inhabit (to stand in, within, in front of, to move though, to stop in, to look at). On the wall, other sculptures as well as tableaux, pursue the construction of place and complete the experience. The sculptures on the wall, like those that work with the void (placed out in the room), interact with both space and air, while the tableaux, concentrated like icons, further punctuate the space, arresting the forward motion of the body, bringing the gaze to a sharp focus. (…)
Olivier Delavallade
Excerpts from the essay En équilibre, dans le vide, in the catalogue WHERE WHAT WAS, Paul Wallach’s solo exhibition held at the Musée d’Art Moderne et Contemporain de Saint-Etienne Métropole in 2014, and in 2015 at the Domaine de Kerguéhennec.