GAVLAK Los Angeles presents Atlanta-based artist Paul Stephen Benjamin in his first solo exhibition with the gallery, Black Is A Color. Benjamin’s multimedia practice includes painting, photography, and sculpture, foreground in a conceptual exploration of Blackness. Through the multiplicities of Blackness −as social construct, color, and culture− Benjamin exposes the dichotomies between American history and subjective Black experience. 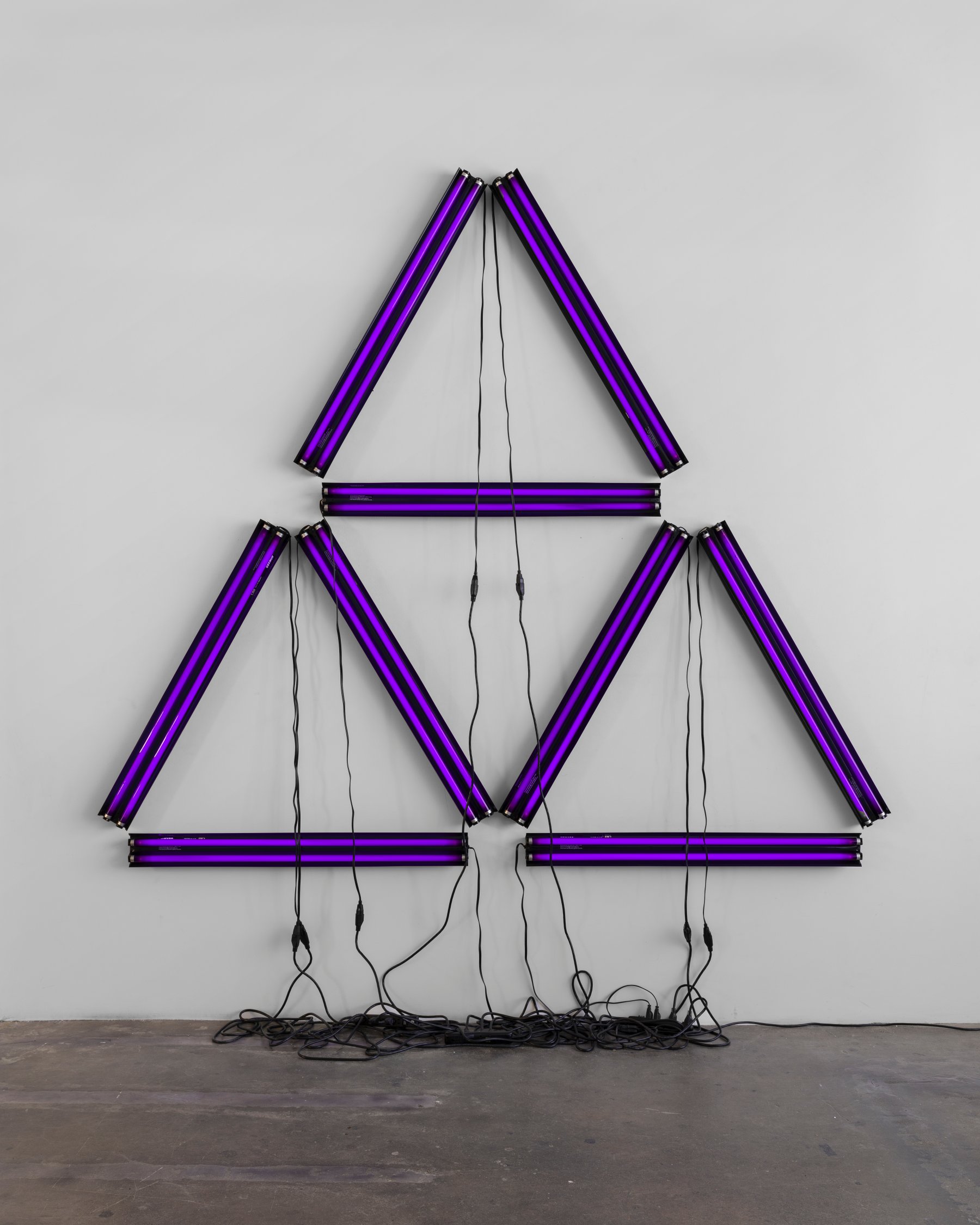 Manipulating material and iconography, he creates meditative works that invite viewers to contend with the unfixed, contradictory, and beautiful realities of a Black life. Black Is A Color features two recent monumental installations; the blacklight sculpture Black Illuminati (2021) and the multichannel video installation God Bless America (2016). Together, these works utilize radiating sound and light to immerse viewers in multisensory explorations of Blackness.

Benjamin collapses and conflates time within his practice by referencing the cultural aesthetics and iconography of the latter half of the 20th century. The collaging of objects, sights, and sounds create slippages across time and space that allow the utterances and intonations of Blackness to remain animate. He mines the depth of Black material culture and semiotics by employing such objects as the flag, shattered glass, and analog technology. The pyramid, as architectural marvel, appears in various indigenous cultures around the world. They were constructed to convey power and wealth, as well as bridge the physical world to those beyond. As symbol, the pyramid has come to represent the acme of sacred knowledge. Appropriated through the centuries, the symbol appears on the reverse of the Great Seal of the United States and swinging from rapper’s gold chains. Benjamin references this ancient technology through modern innovation in Black Illuminati. The 8-foot-high installation was constructed specifically for this exhibition and consists of cylindrical blacklights in the formation of a two-dimensional pyramid. Glass bulbs, that would otherwise appear black, are illuminated, bathing the surrounding space with violet tinted light. With wires and cords exposed, the installation reveals the transmutative power of the color black imbued with light.

God Bless America is a large-scale installation composed of over 40 analog televisions from which a multichannel video plays. Previously featured in the 2017 exhibition Fictions at the Studio Museum in Harlem, this iteration is site-specific to the GAVLAK gallery space. The invention and wide dispersal of the television created an international platform from which Blackness is most contested, shared, and archived. Coinciding with the American Civil Rights Movement, widely broadcast programming played an essential role in uncovering U.S. race relations and the creation of our modern visual iconography. Benjamin began incorporating found televisions into his practice in 2012, and has since created a series of monumental installations, one of which is featured in the current traveling exhibition, The Dirty South: Contemporary Art, Material Culture, and the Sonic Impulse. The central video channel of God Bless America features looping historical footage of soul singer Aretha Franklin performing at the 1977 presidential inauguration of Jimmy Carter. Franklin’s face is surrounded by orbs of warm orange light as she belts the lyric “God Bless America” from Irving Berlin’s 1918 anthem. This is juxtaposed with footage of New Orleans rapper Lil Wayne’s 2013 music video for “God Bless Amerika,” in which he stands before an American flag facetiously echoing the same phrase. These screens are surrounded by looping footage of flashing red, white, and blue lights, akin to those created by police vehicles or fireworks on the fourth of July. The pleading hope held in Franklin’s voice, interrupted by Lil Wayne’s flippant snarl simulates the contentious feelings Black people experience in relation to nation, and home.

Courtesy of the artist and GAVLAK Los Angeles | Palm Beach