Paul McCarthy, one of the most provocative and influential voices in multimedia, sculpture and performance art, unveils new paintings in his first exhibition devoted to the medium since the 1980s. 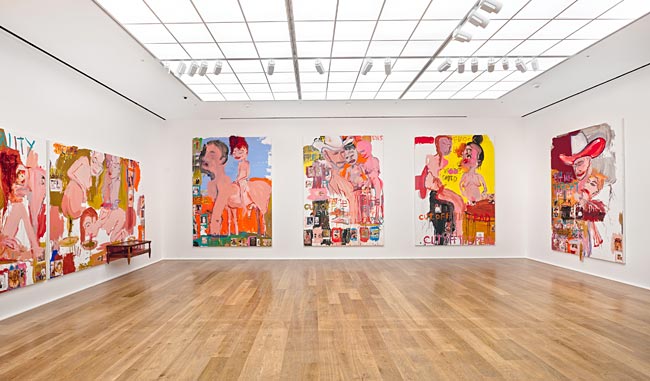 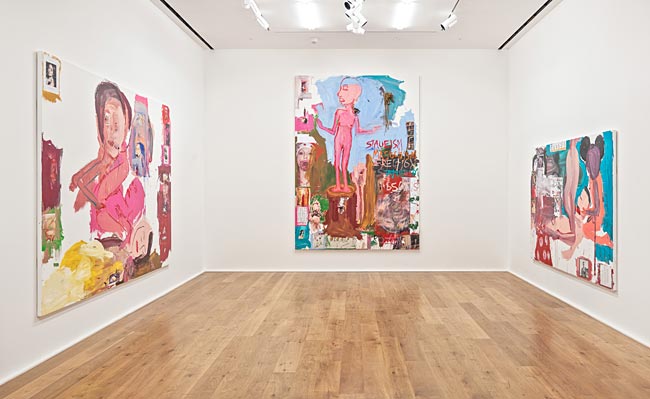 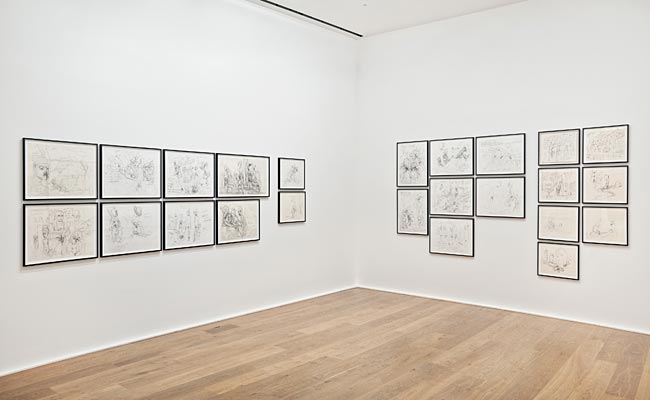 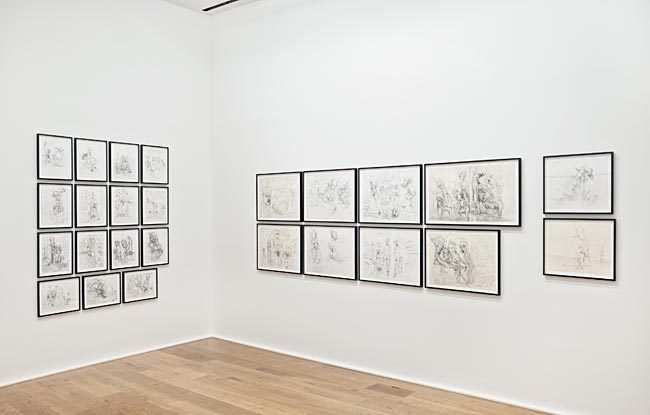 McCarthy’s paintings represent the latest iteration of two major ongoing projects within his multidisciplinary practice: White Snow and Stagecoach. In both series, archetypal American narratives are pitched against human drives and desires, and examined with McCarthy’s characteristic wit and subversion. Informed by his own tradition of improvised performance, scatological performative practices are played out on the canvas in a charged, gestural painting style motivated by material experimentation and psychological processes.

The White Snow project began as a suite of drawings in 2009, which drew on the fairytale Snow White and explored the multilayered references within the original German folk story and its commercialised 20th century versions. The series has since evolved into a multi-platform narrative of McCarthy’s own making, incorporating sculpture, performance and the epic installation ‘WS’, presented at the Park Avenue Armory, New York in 2013. In the WS paintings, McCarthy restages moments from his ‘WS’ performance and invents new scenarios entirely, recasting familiar characters in unfamiliar guises.

McCarthy combines his two central motifs with the language of painting as subject matter in itself, invoking the art historical canon as a framework for his narratives; in two paintings, McCarthy reworks the formal compositions of Edouard Manet’s ‘Le déjeuner sur l’herbe’ (1863) and ‘Olympia’ (1863). White Snow, usually a paragon of feminine virtue, is depicted as a garishly made-up, despoiled protagonist. In ‘WS, Dior’, McCarthy casts White Snow as Manet’s Olympia, but here she is an assertive figure aware of her seductive power as she regards a moustachioed character resembling Walt Disney in the foreground. Walt Disney continuously reappears as a character within McCarthy’s WS series as the pathetic and semi-autobiographical figure Walt Paul. Formally figured as Michaelangelo’s ‘Pietà’ (1498 – 1499), McCarthy creates a caricature of Christ in the arms of the Virgin Mary in the painting ‘WS, Christies’, where the central characters are replaced by farcical renderings of Walt Paul and White Snow and the gender roles are reversed.

Stagecoach is McCarthy’s second long-term project, based on the film of the same name, a 1939 American Western starring John Wayne. The movie follows a group of strangers travelling across the United States in a stagecoach pursued by Apache Indians. Here, McCarthy uses the Western as a recognisable structure from which to form alternative interpretations; the SC works focus on social interaction between the genders and ‘saloon girls’ reappear as central characters. A repeated castration theme is conveyed through textual references scrawled across the paintings like a mantra: ‘CUT OFF THE HEAD / CUT OFF THE PENIS’.

The Western genre is central to American masculine identity, and here McCarthy restructures reality using Hollywood’s tactics. He alludes to classic icons of martyrdom whilst exploiting film stars as characters in a sexual vaudeville. ‘SC, Leonardo DiCaprio’ can be read as a profane version of St. Sebastian, as the composition centres around a figure with hands tied symbolically behind its head and with legs spread wide. McCarthy employs a wealth of art historical references to render his figures as powerless and impotent; even the horse, conventionally deployed as a symbol for military prowess, is represented here limp and pink, barely capable of supporting his charge. Together, the SC paintings function as unscripted storyboards in which McCarthy reverberates between the central Stagecoach motif and male icons of the film industry in a series of sexual dreamscapes which form a starting point for a future Stagecoach performance and film.

McCarthy employs collage throughout these paintings, uniting a host of seemingly unconnected reference material such as ripped fragments of high-fashion magazines, images sourced from the Internet and three-dimensional objects including synthetic wigs, a pair of boots, a coffee table and soft toys that are wedged forcefully through the surface of his paintings. Within these works, McCarthy expertly weaves the history of painting with contemporary motifs in dramatic scenes that expose latent desire and exploit the uncomfortable space where childhood innocence meets adult knowledge.Exhibited alongside his paintings, a room of Hauser & Wirth’s Savile Row gallery is devoted to new drawings related to both White Snow and Stagecoach.