There’s something about being held within the form, like the actual person, the life cast, is held within the fantasy of the form. It’s a piece that draws you in. You go around the back, you come to the front…
– Excerpt from artist interview 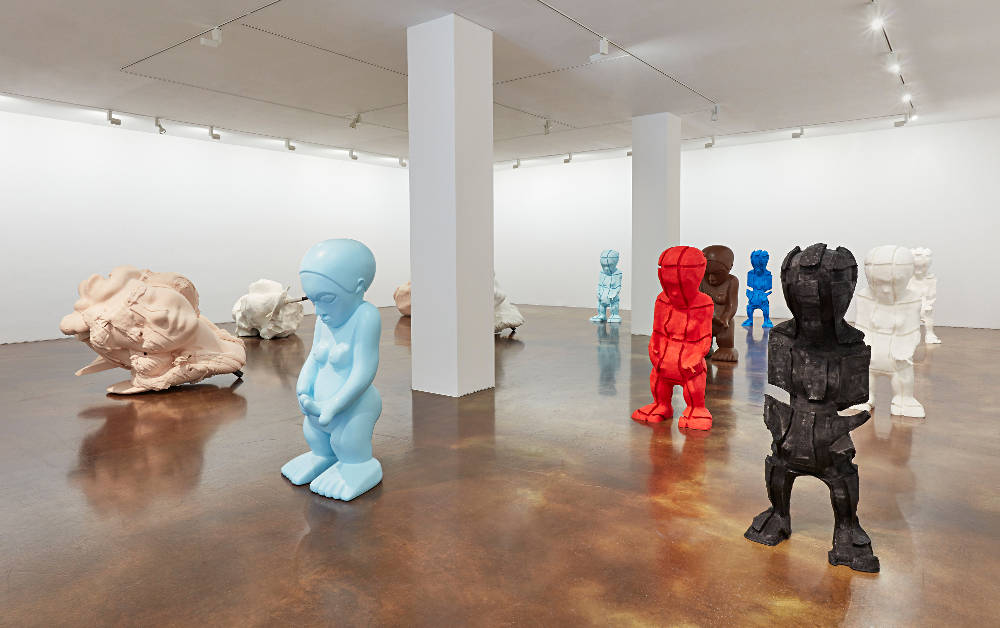 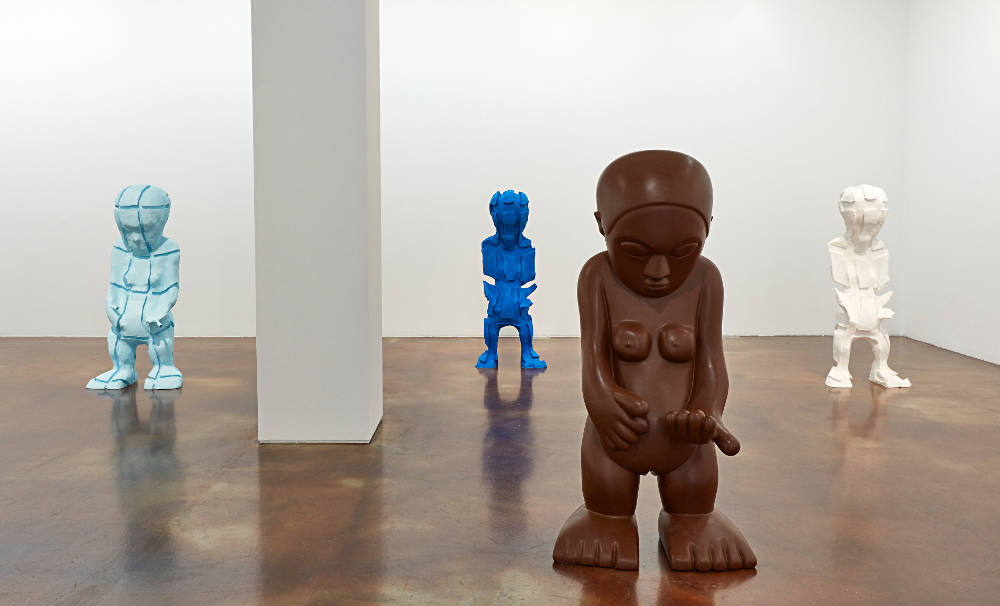 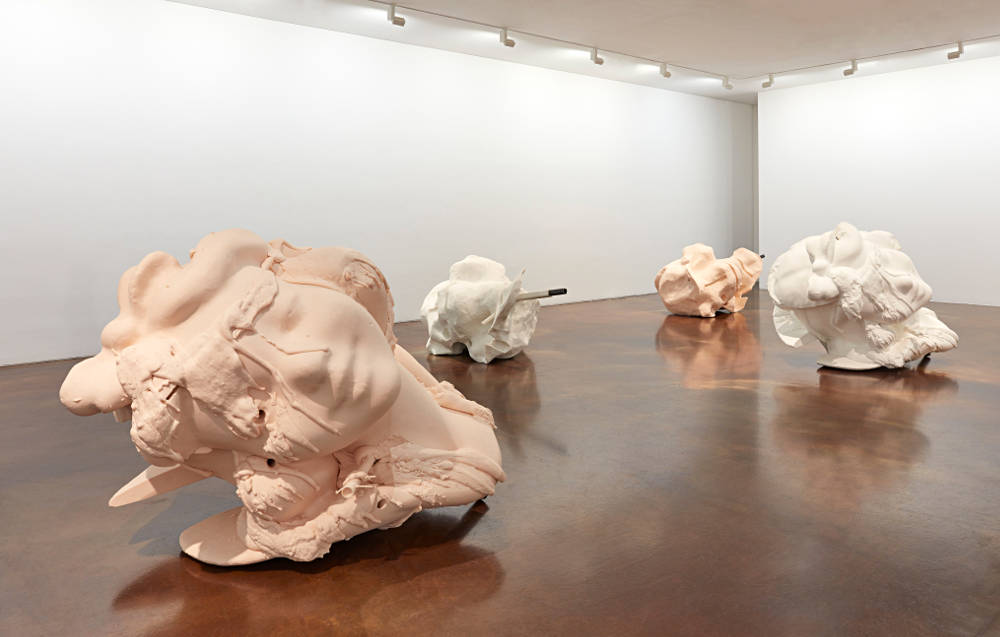 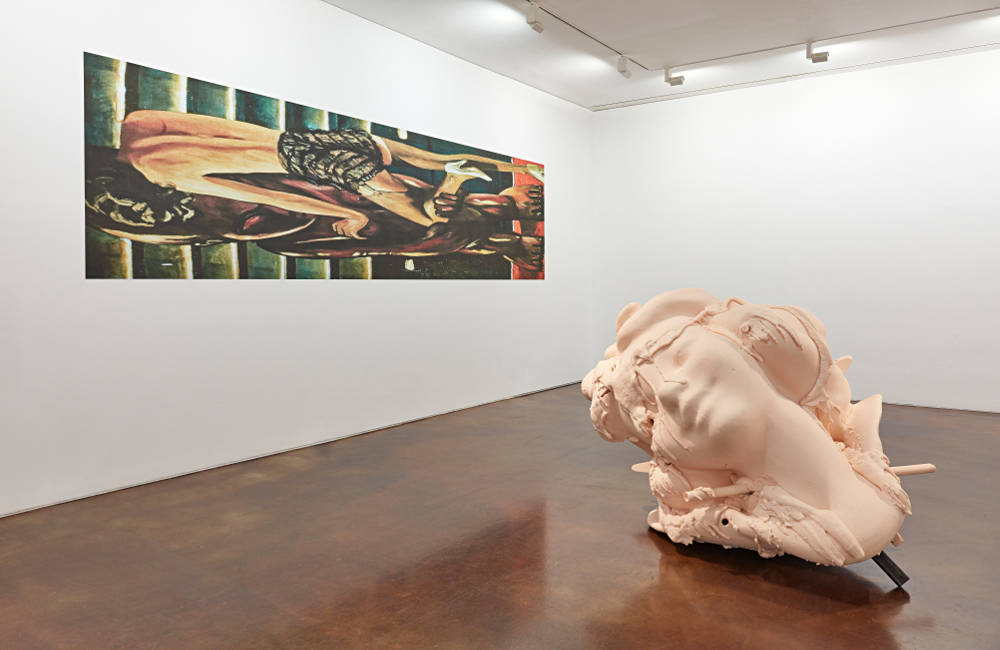 Paul McCarthy occupies a critically important place in contemporary art. Over more than four decades his work has repeatedly challenged audiences to confront popular myths and wrestle with the psychological undercurrents of capitalism. His work is both generous and confrontational; meticulously conceived and crafted no matter what medium he uses, his complex, often overlapping projects have come to define the zeitgeist of postmodern visual art. Exploiting genres as diverse as sculpture, performance, film, and photography, McCarthy has invented an entirely new category of art making—a mash-up of mass media and cultural fantasia that is at once universal and shockingly personal.

This balance of culture and psychology is the underlying theme of this show that continues the artist’s exploration of myth, folklore and popular iconography including familiar stories such as Snow White. Made famous by Walt Disney’s beloved 1937 animated classic film ‘Snow White and the Seven Dwarfs,’ the role of the innocent princess has served as a cipher for McCarthy’s exploration of how media commercializes desire, best illustrated by the countless kitsch objects that have been created over the past century to market the fairy tale. McCarthy has appropriated these ubiquitous figurines, altering their scale and fragmenting them in both heroic and abject ways. In repeatedly co-opting familiar tropes of normative social values, McCarthy confronts the way our identity is constructed, often subconsciously.

One of the unique ways the artist works is to recycle and reclaim aspects of his fabrication process as means of creating new and unpredictable sculptures. He has likened these works to “spin-offs” alluding both to their material evolution and the popular term in Hollywood for cross-marketing entertainment products. In the case of Snow White, McCarthy has created numerous intersecting bodies of works including video, installation and sculpture under the title White Snow (WS). For this exhibition, McCarthy will include fragments of White Snow (WS)’s head in silicone. In addition, he has begun using a component of the casting process known as the “core” as another parallel body of work. Typically hidden from view within the sculpture itself, the artist began using the core as a spin-off, presenting an unsettling vision of what lies beneath or within our fictional characters—in effect, presenting the interior space of our most cherished myths.

This strategy of using the core has also been used in another sculptural series inspired by the French artist Francis Picabia (1879–1953). In these works, McCarthy was influenced by the painting Woman with Idol (1940–1943), in which Picabia depicts a female figure embracing a giant pagan idol. Appropriating the idol in much the same way as a Disney character, McCarthy has spun off various core sculptures in a range of colors and cut-up configurations. In reproducing this archetypal facsimile of a god-like fetish, the artist has created a potent reflection on our pulp fiction desire for the primitive and supernatural.

In another never-before-seen body of work, McCarthy has scanned his own naked body and cast it in resin. Violently cutting and reassembling these hyperreal, life-sized sculptures, the artist has created an uncanny meditation on the human form that evokes both fun-house horror and classic statuary. In addition to these striking and beautiful figures, the artist has also produced a suite of large-scale prints made using the same digital scans. Painting on top of these serene and disturbing prints, McCarthy has successfully created a powerful and unsettling installation evoking classical allegory.

PAUL MCCARTHY was born in 1945 in Salt Lake City and received his BFA in painting from the San Francisco Art Institute, after which he received an MFA from the University of Southern California where he studied film, video and art. Upon graduation in the early 1970s, he first became known for his visceral performances and film works. In 1982, he was invited to teach video, installation, and art history at the University of California, Los Angeles. During the 1990s he extended his practice to standalone sculptural figures, installations, and large sculptures both animatronic and inflatable.