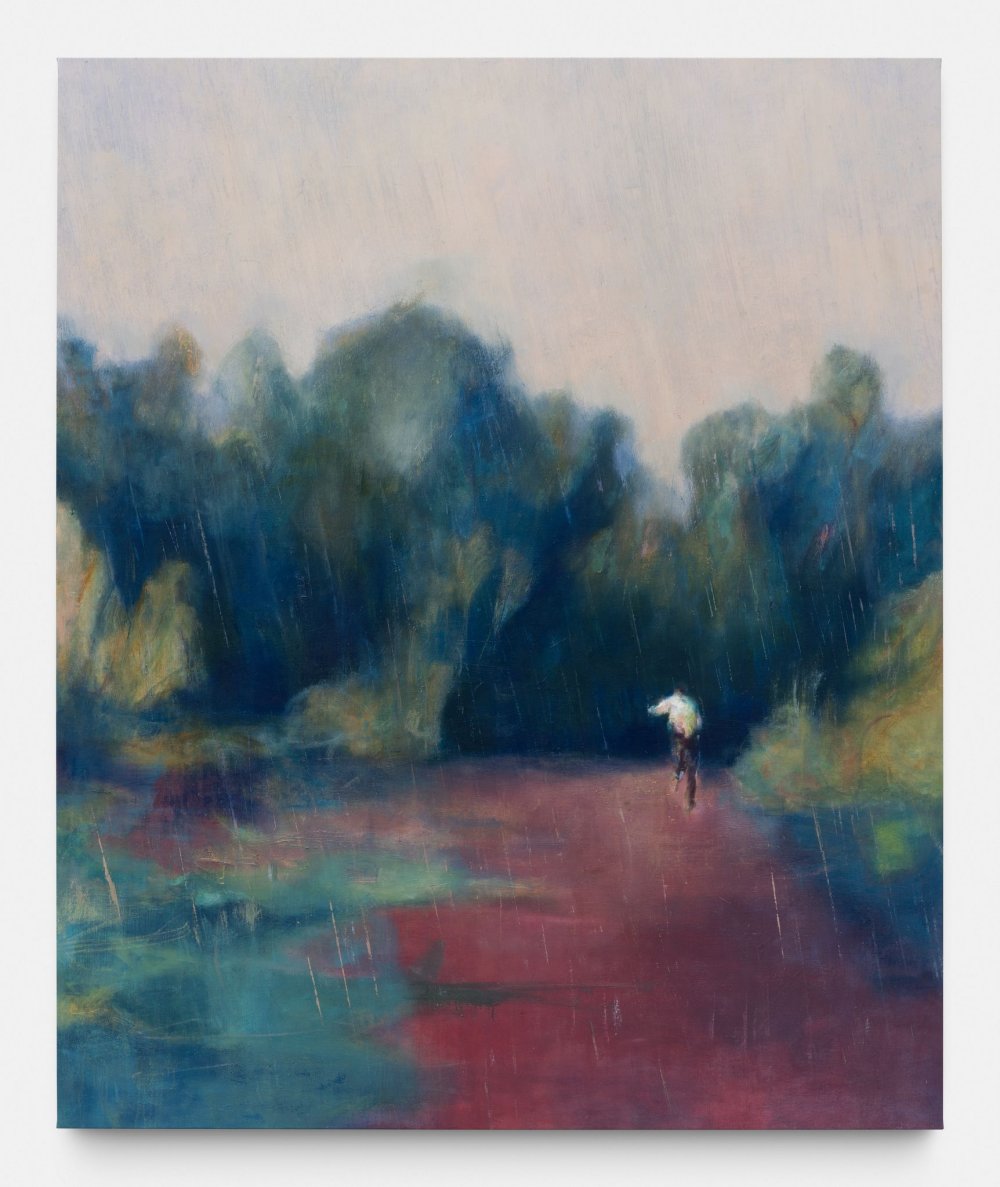 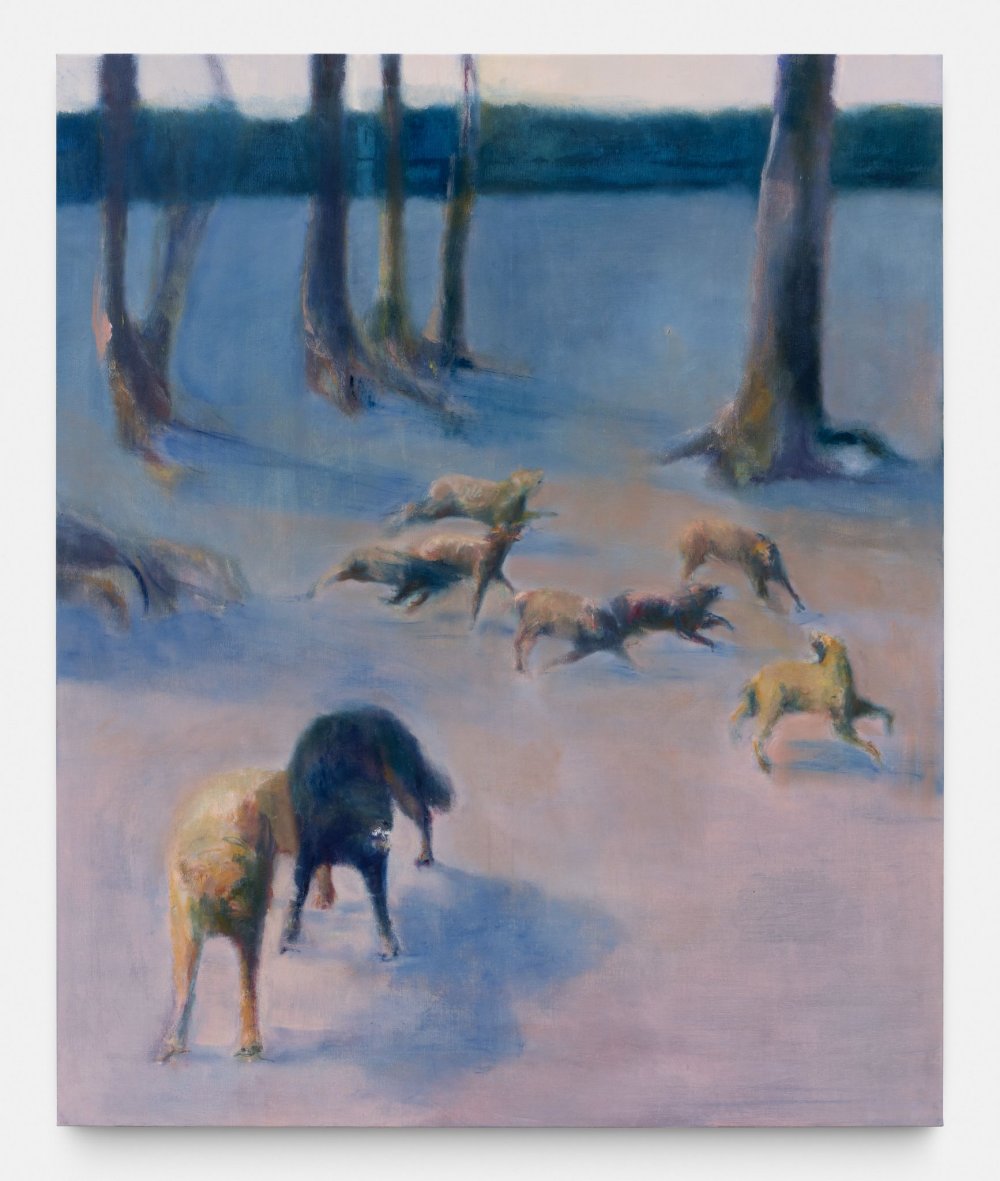 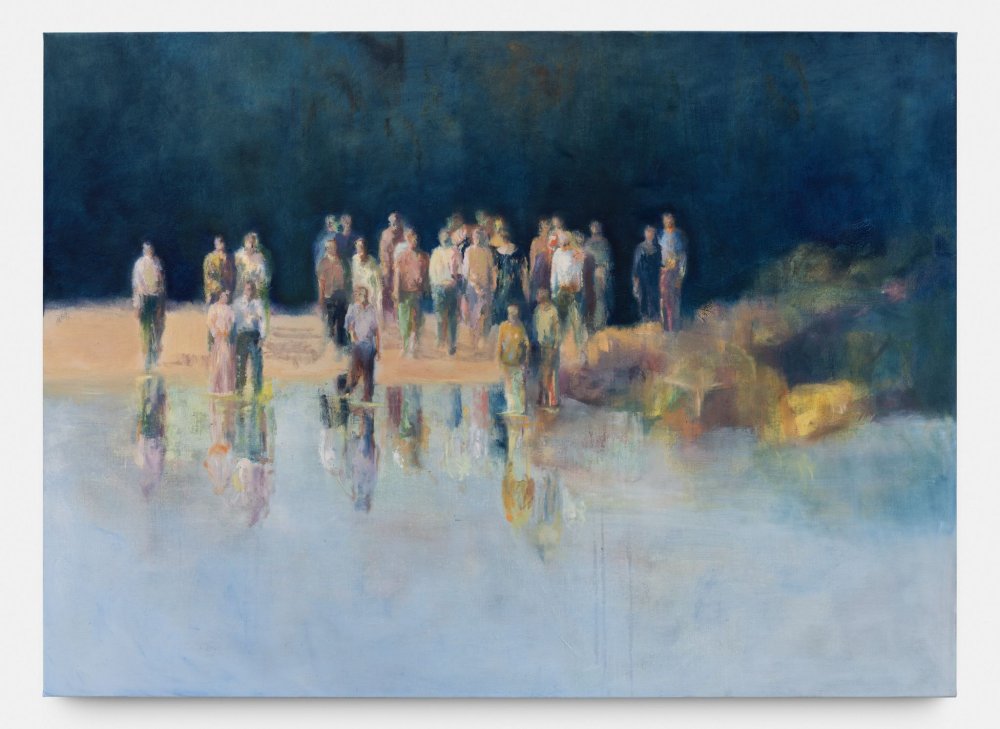 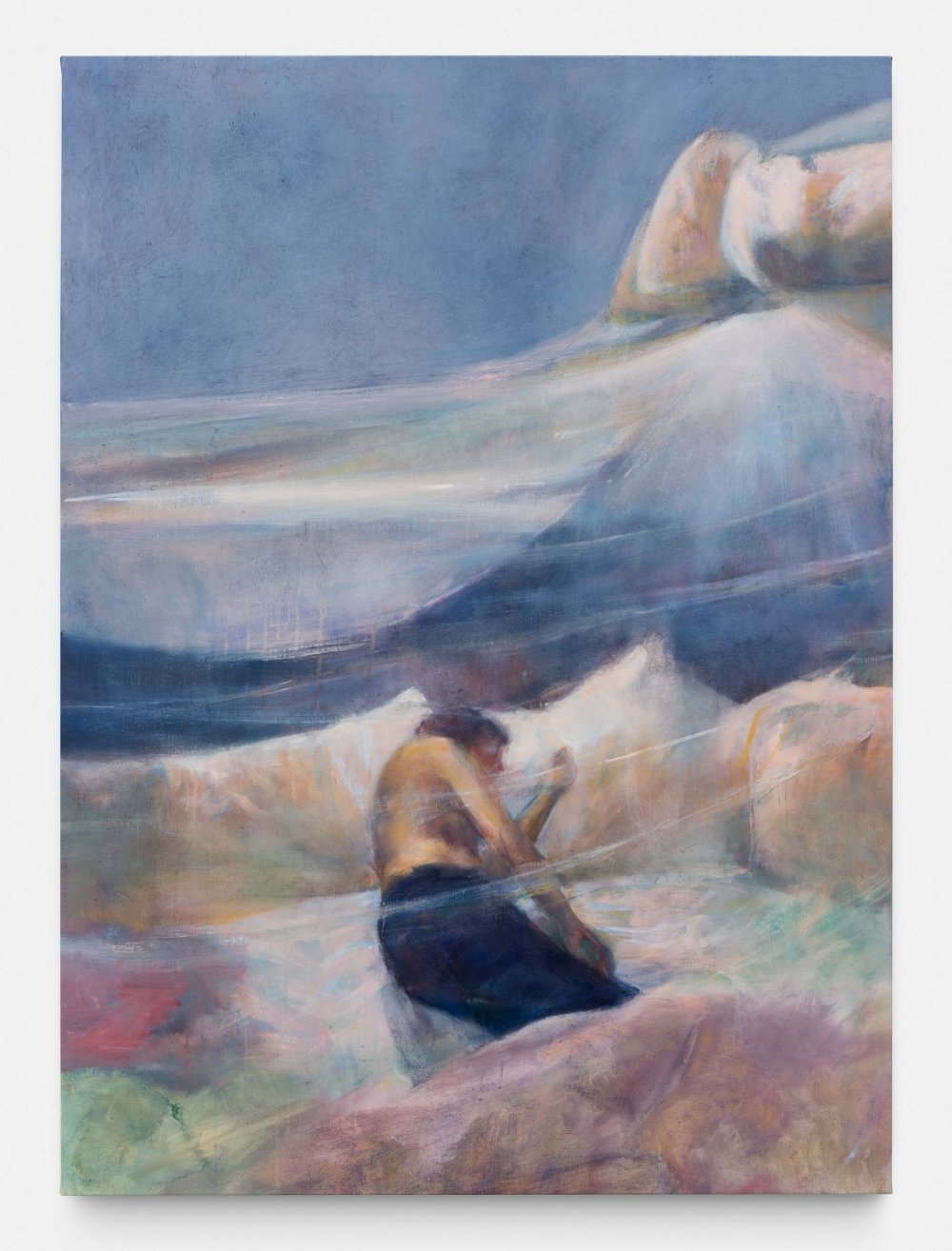 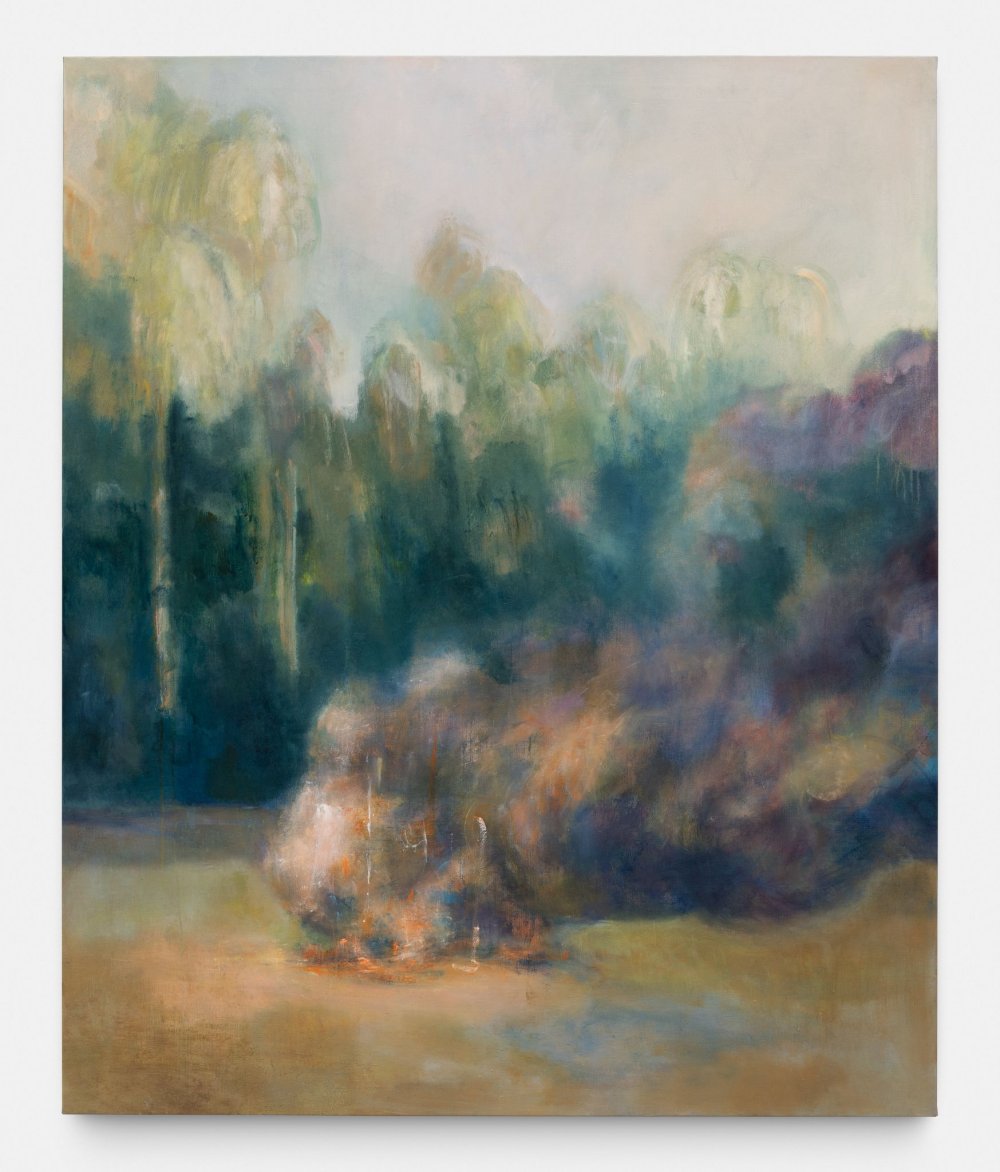 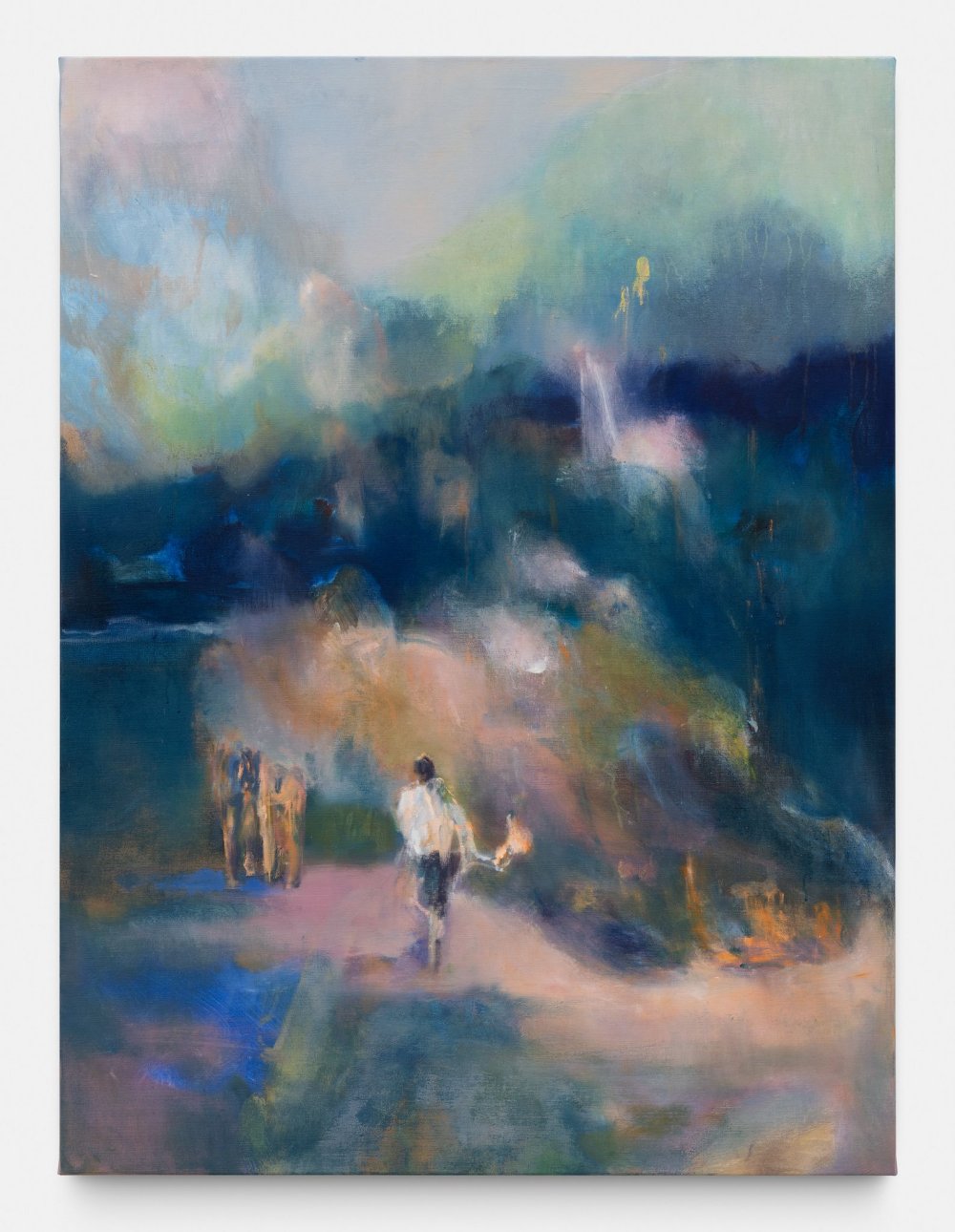 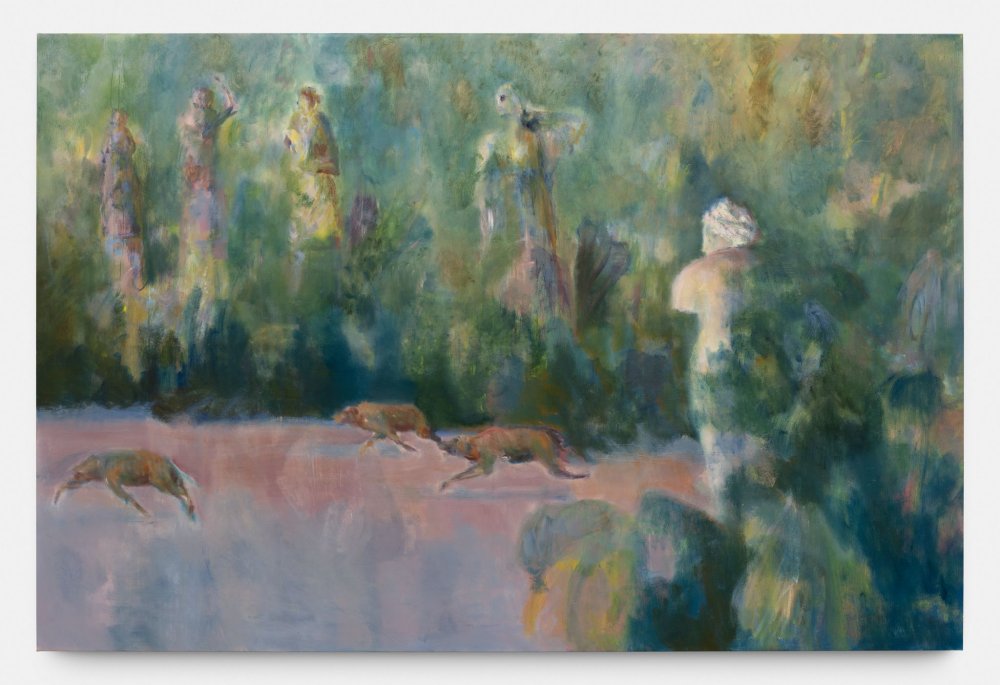 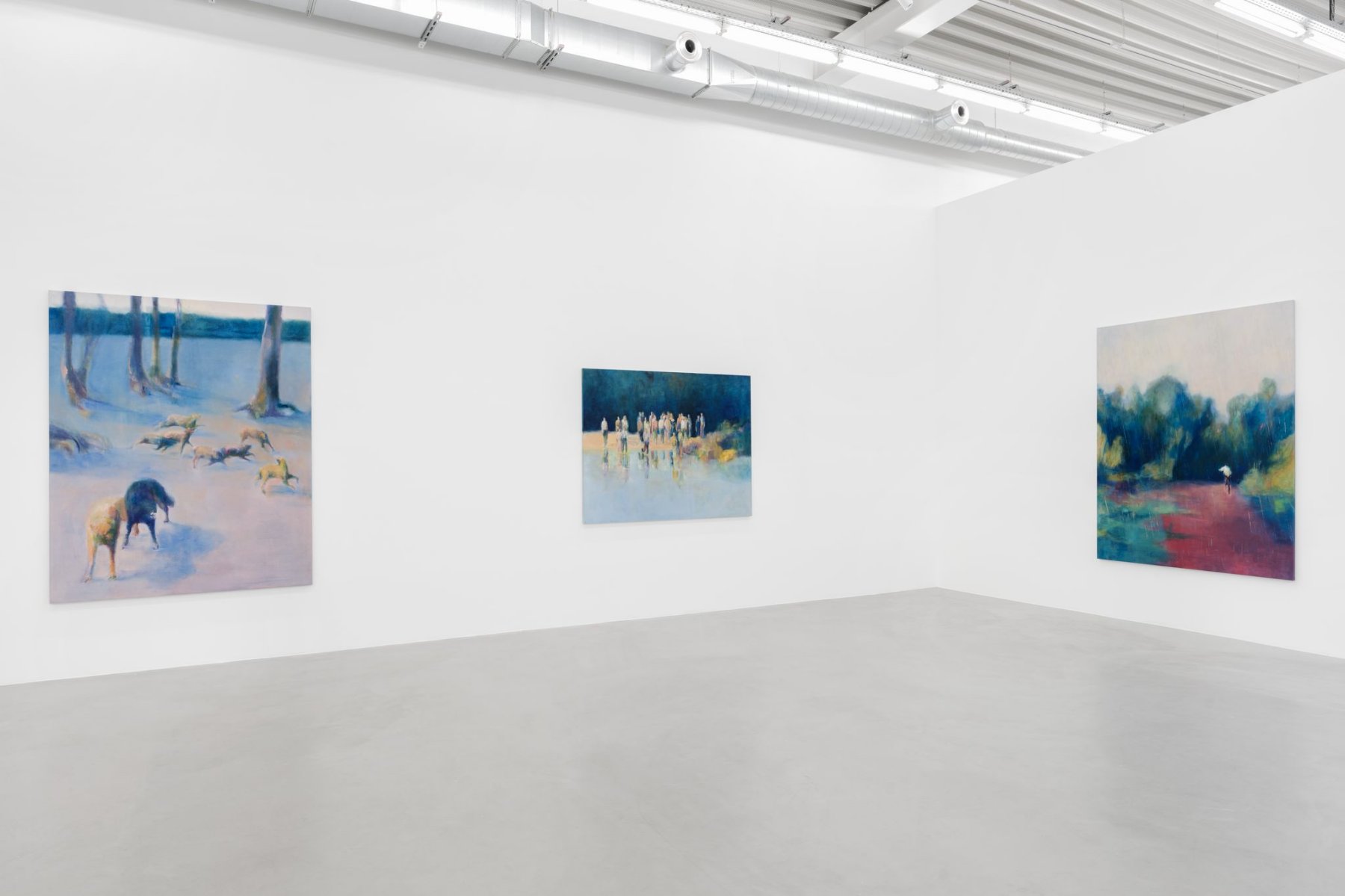 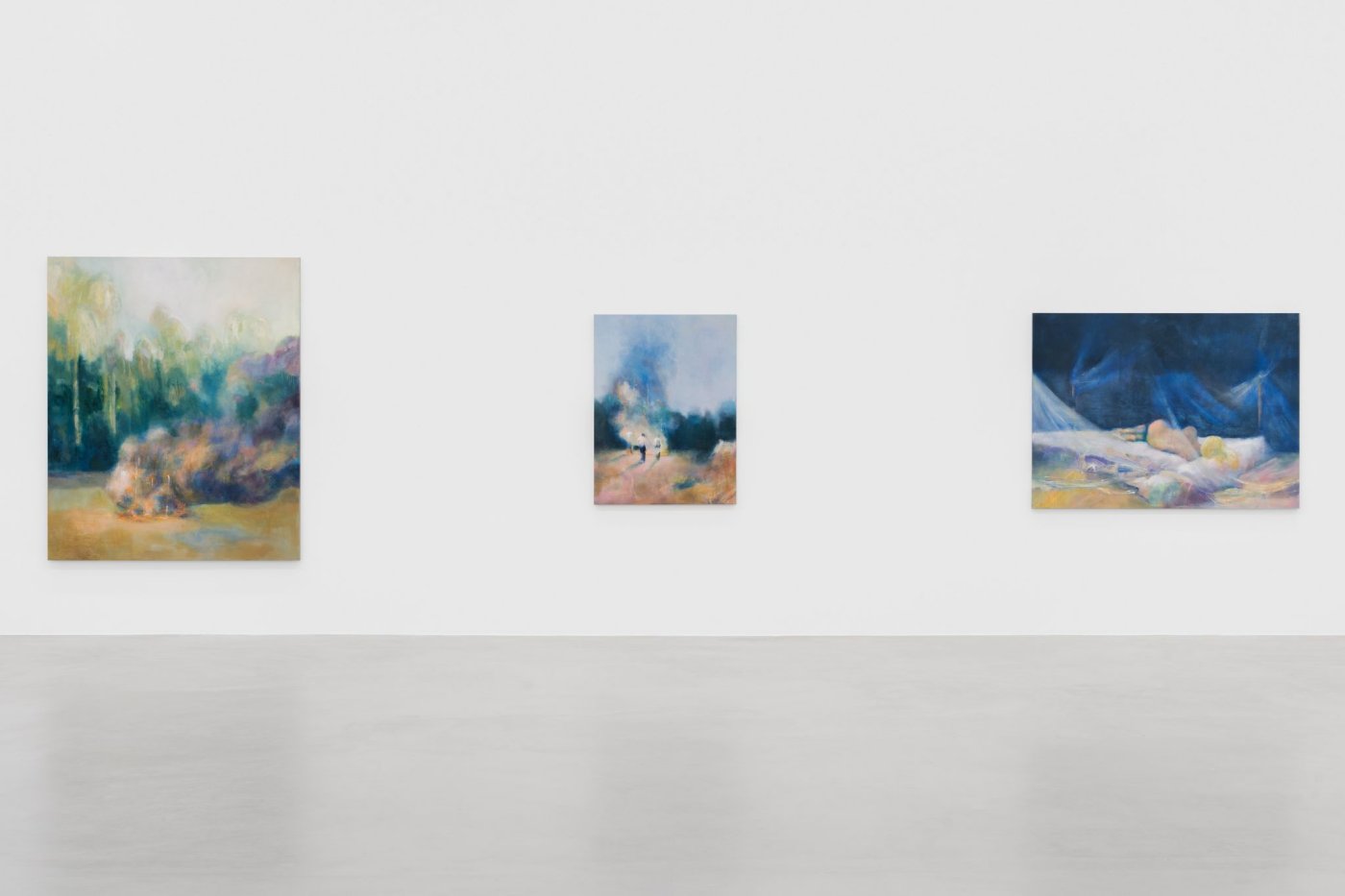 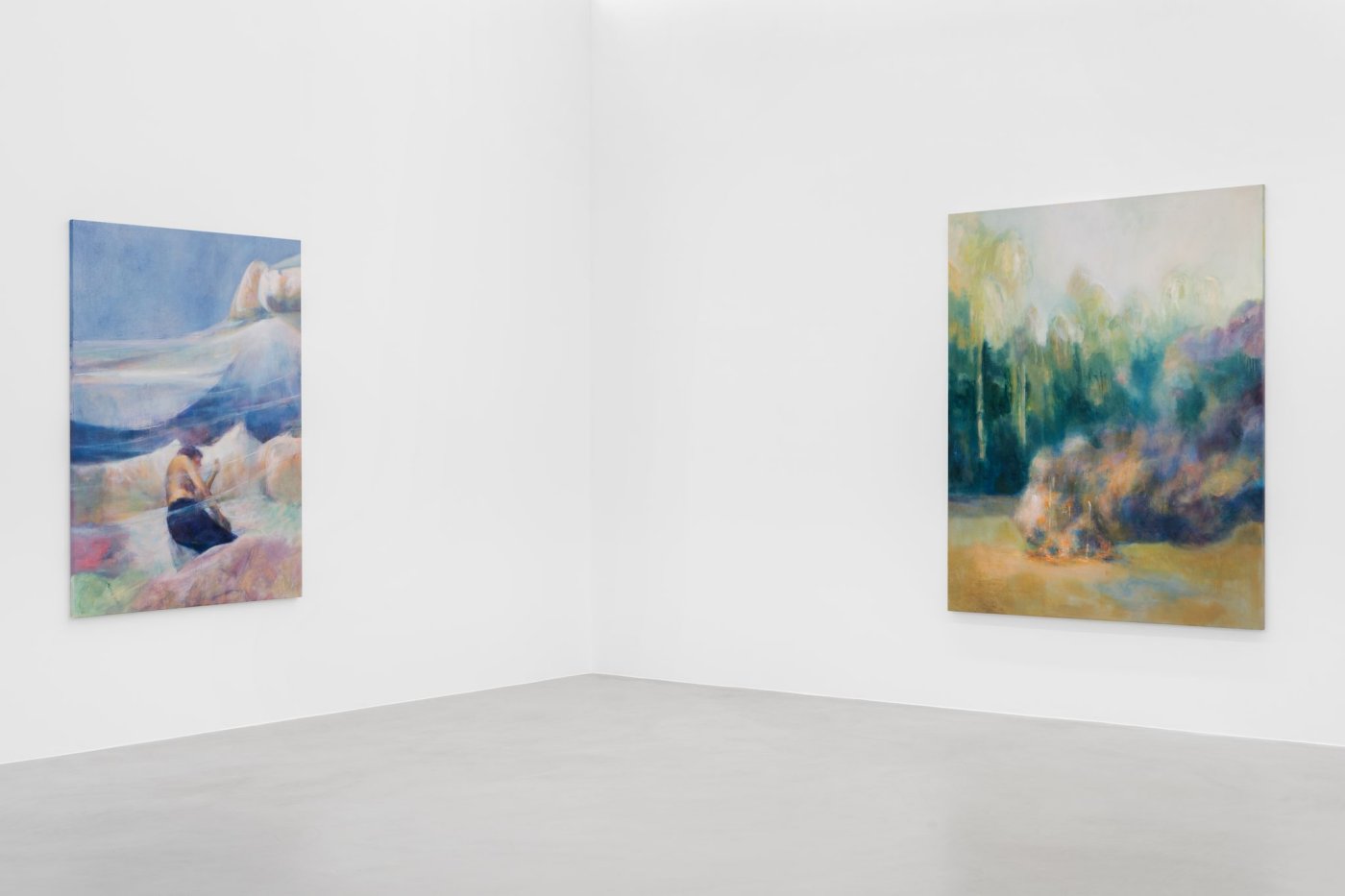 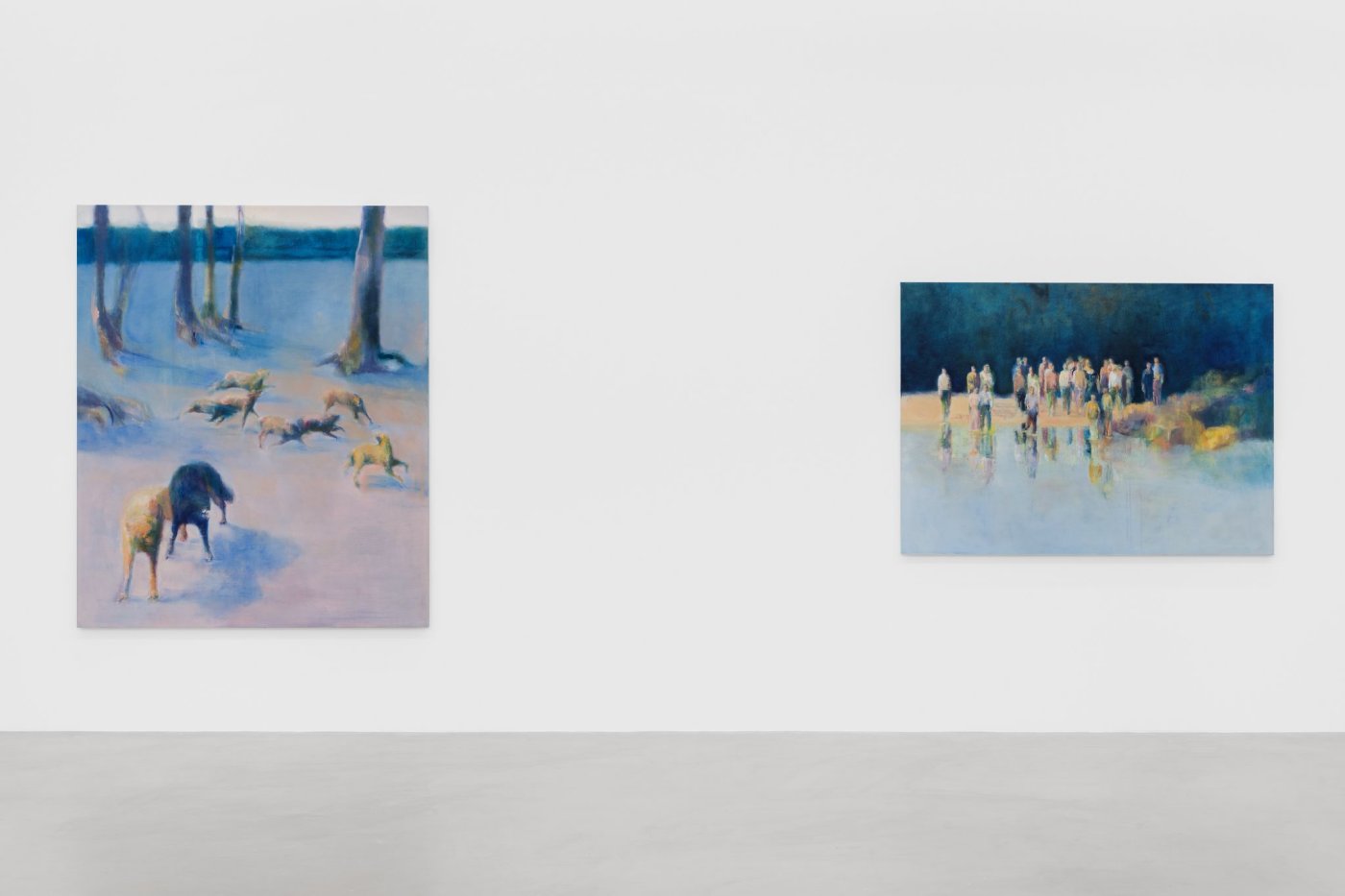 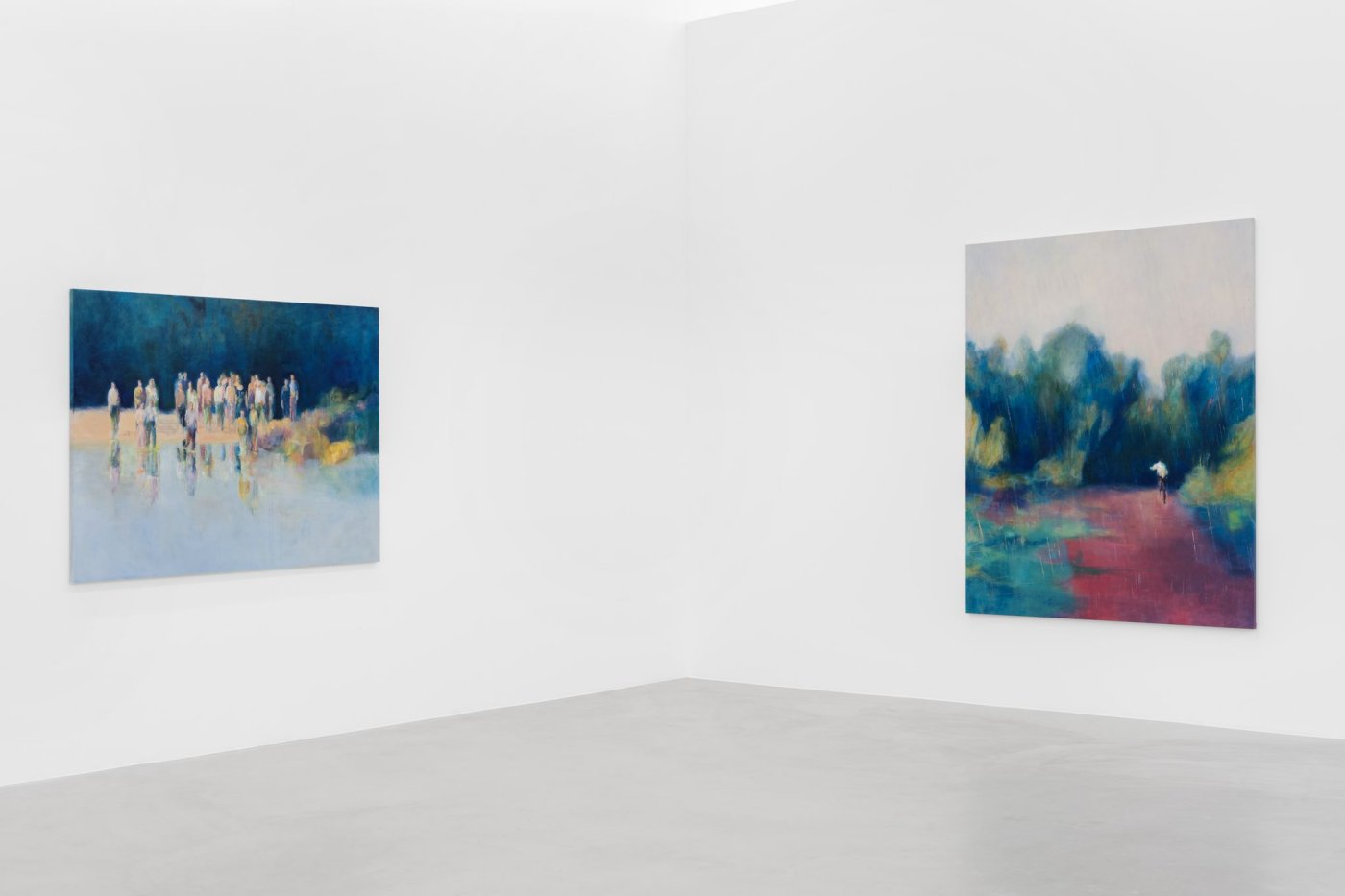 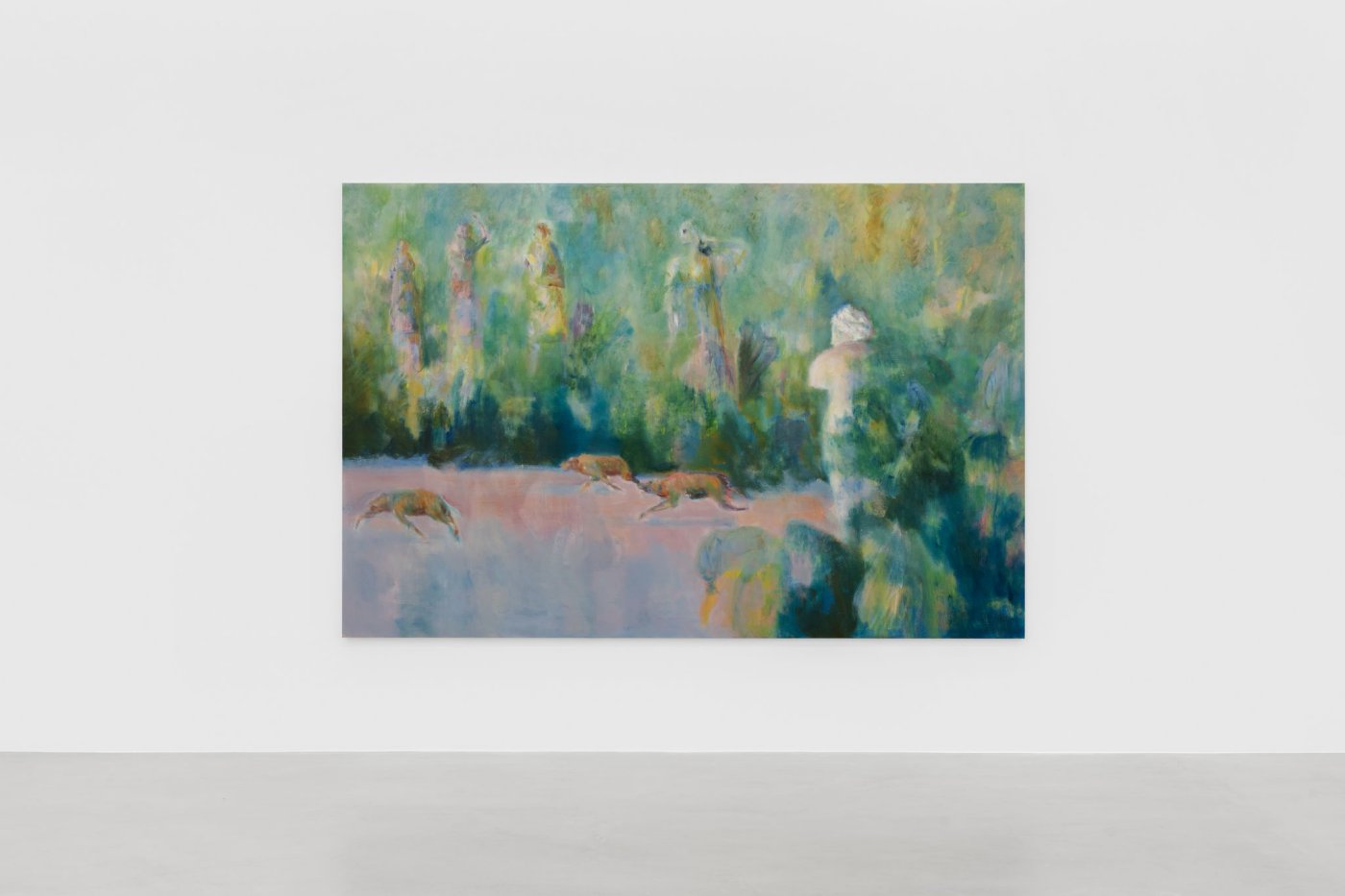 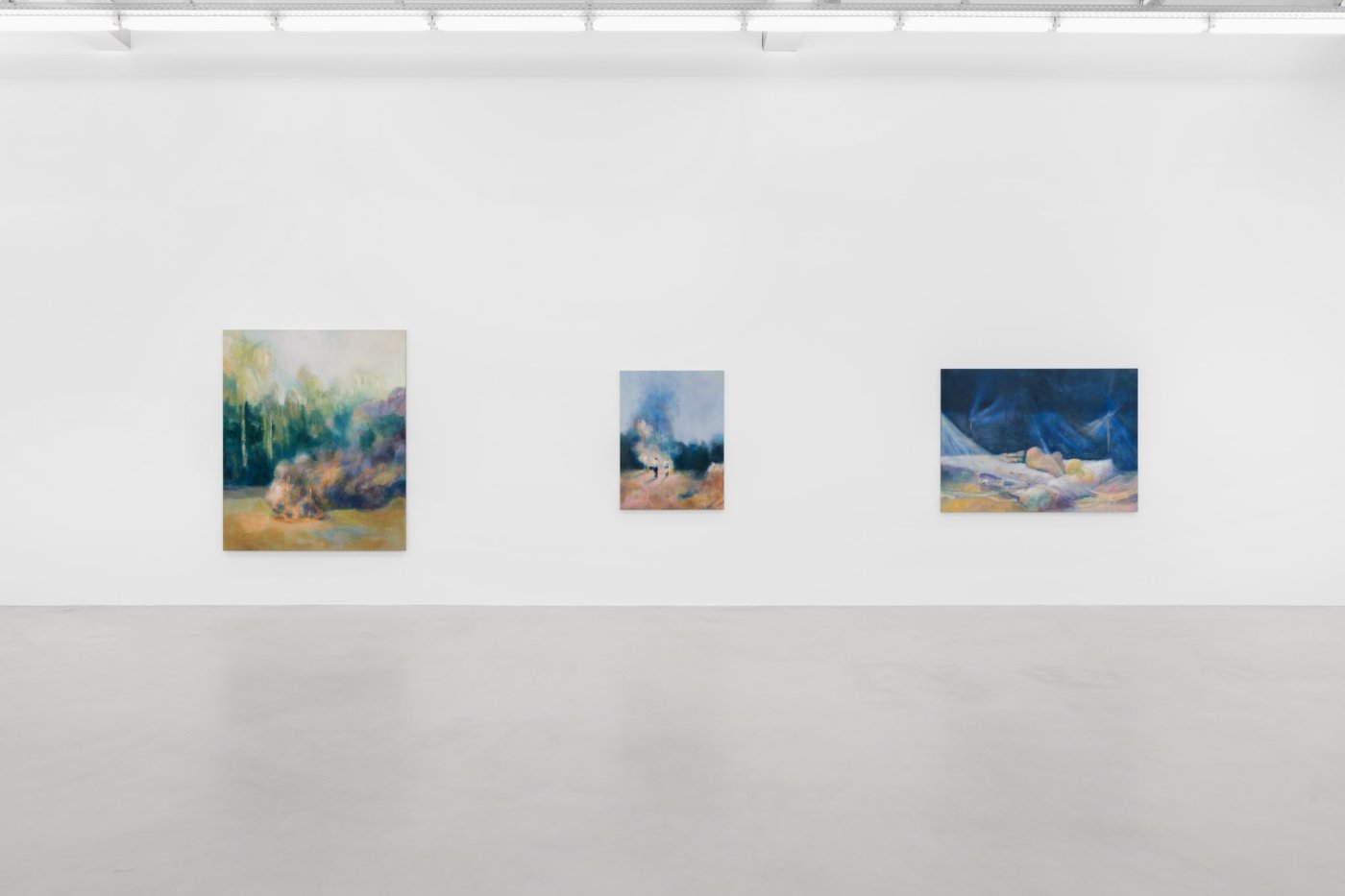 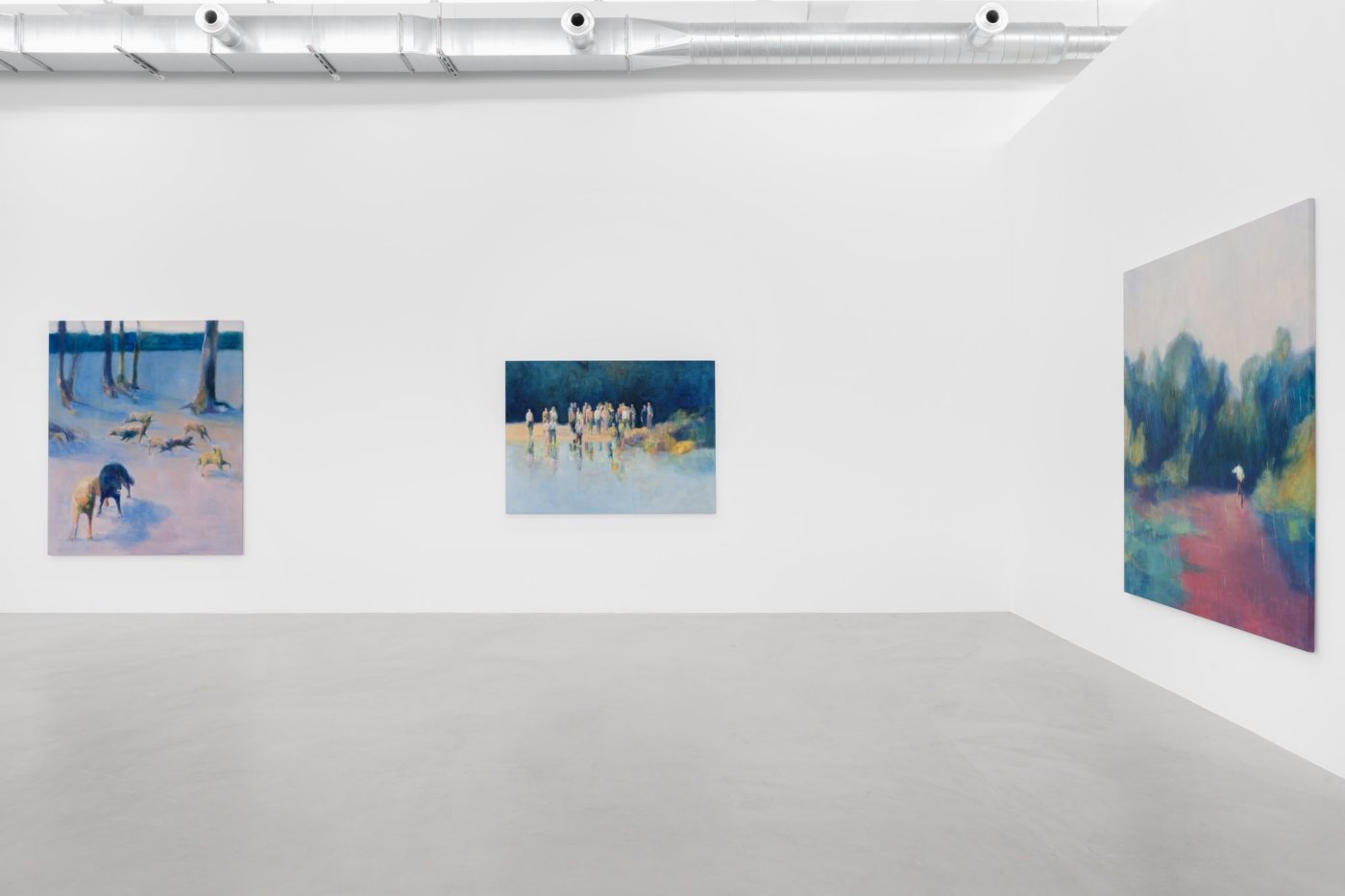 Two ominous words unite Paul de Flers’ (b. 1988) newest body of work: Take Shelter. Painted in Brussels in 2021 in a period when unseasonal snow blanketed the blooming flowers of the Spring, and sheets of rain washed out fantasies of a sun-kissed summer, the subtitle There’s a Storm Coming provides an entry point to navigate the 9 works in the artist’s second solo exhibition with Almine Rech. Inspired by artists that range, from Hiroshige to Mamma Andersson, to Delacroix and their poetic ability to frame and revere the drama of nature, de Fleurs’ practice evokes a sense of neo romanticism. Interestingly, several masterpieces of art and literature from the nineteenth century, such as Lord Byron’s Darkness, Mary Shelley’s Frankenstein, and J.M.W. Turner’s most turbulent skies and seascapes, were created amidst similarly extreme weather in the aftermath of the 1815 eruption of Mount Tambora in Indonesia. One of the most violent recorded volcanic explosions in history, the ash and sulphur ejected from deep within the core of the planet high into the atmosphere cooled global temperatures and darkened the skies as far away as north-east America and Europe – inspiring the moniker for 1816 as the “Year Without a Summer.” The physical darkness of this period remains with us via the imaginations of artists and writers who lived through it. As it was for Byron, Shelley, and Turner, for de Flers, the weather simply provides background to foreground a story where evolving and contrasting human emotions unfold. They are never just talking about the weather.

Inspired by psychological thrillers in film and literature, de Flers accentuates the tension found in the dynamic shift between danger and safety in his work. He plays with contrast; the more peaceful the scene, the more menacing the color palette, the more overt the threat, such as a blazing fire met by a deluge, the earthier and more natural the painting becomes, speaking to the equilibrium that can be found when the dangers of fire and water collide. de Flers works to cultivate the latent intuition of the viewer, empowering the viewer with a sense that they might already grasp what is coming next. While two human figures (perhaps protagonists in a story which the viewer is meant to piece together with their own narrative) seem to rest peacefully under the cover of mosquito nets, the highly contrasted light filtering through an implied stormy cloud-cover above hints that this may be – but a fleeting calm paused within the eye of a storm. Floating forms and washes of color from violet skies to ochre rains suggest that this could also just be the scenography of these figures’ dreams. One of these figures is de Flers himself, and this entire body of work could also be seen as a self-portrait where the artist introduces us to a non-intuitive sense of freedom and peace that he finds when living as close to nature as possible. When the only goal is survival, all else falls away and we are free of many constraints invented by humans that keep us from achieving profound emotional and spiritual growth.

Our many senses of shelter are being stormed. Beyond extreme weather events, the physical and psychological sense of shelter within our own bodies has been challenged by the fear and isolation plaguing contemporary society. Shelter can also feel like a prison. As in many of de Flers’ paintings, herds of timeless, non-descript people populate an image heaving with a sense of melancholy and alienation. A herd of animals moves, communicates, and connects in a way that de Fleurs’ human figures have yet to do in his work. The animals act responsively to the behavior of the planet, rather than pausing like humans do when awaiting directions from a leader. We don’t know who to listen to anymore in a post-truth society. Even when the storm passes and the humans are gone, registered through art in the form of statues, life continues. What makes us human are our fictions. We leave them behind as art; vehicles of immortality.