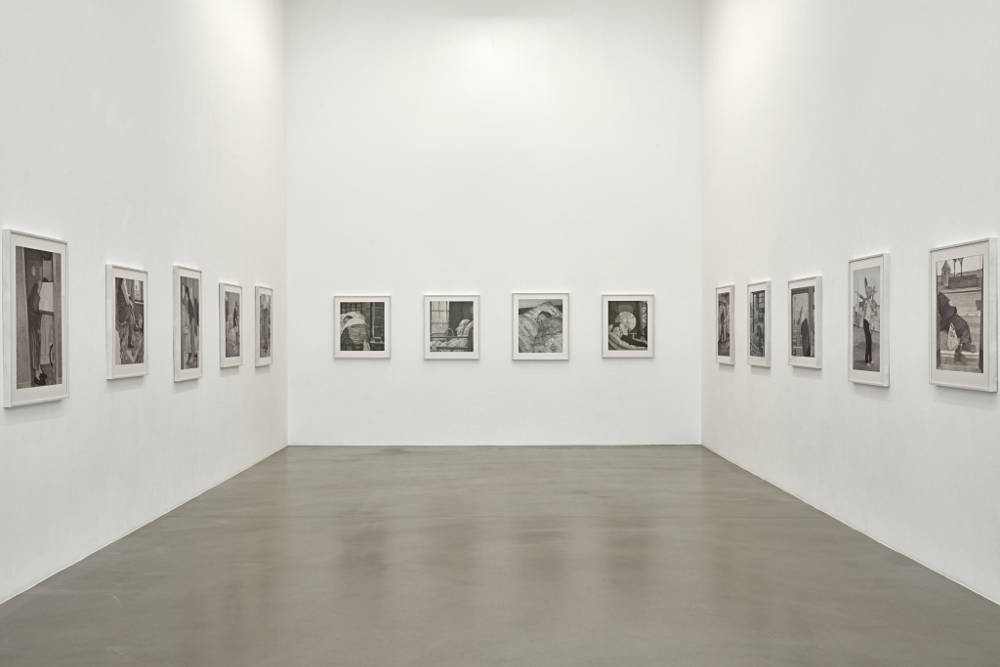 Harford attended Byam Shaw School of Art as a mature student in the late 1960s, before moving to Southend. He lived at different times in Southend and Weymouth, and worked variously as a schoolmaster, cleaner, bin man and hospital porter. Over the course of his life he completed hundreds of drawings – virtually all of them in pencil and graphite stick – which he kept stacked around the walls of his attic studio. Within and between drawings, Harford moved between social realism – capturing and caricaturing fragments of reality – and wry, wayward surrealism. Most of the works in the exhibition date from the 2000s, a period of late, prolific activity.

Characterised by a minutely-detailed style and subtle tonal range, Harford’s drawings frequently evoke the life and atmosphere of the seaside towns in which he lived: promenades, pubs and pavilions serve as the backdrops to scenes of becalmed existence. Often, an air of desolation or ennui prevails. In one drawing, a view through a doorway reveals the figure of the artist slumped on the pavement, as crumpled and forlorn as the discarded plastic bag bedside him, beneath a vista of the sea. Repeating motifs – seagulls, dogs, buses, trains, as well as more personal subjects including the artist’s mother – imbue Harford’s art with the quality of a disjointed story.

The exhibition focuses on drawings in which the artist depicted himself and his mother. Harford is a recurring character in his works, often seen in the midst of an everyday activity – stepping out of a car, shaving, or bent over his drawing board at the edge of his bed (his habitual mode of working). Sometimes he is turned away or partially obscured, for example as he sweeps the pavement, or sits in front of an electric fire, his head elided from view. In such instances he takes on a generic, semi-anonymous role. Harford’s drawings of his mother show her seated and contemplative, or frail and asleep during her final days. His forensic attention to surface detail – seen in the play of light across her sleeping face – poignantly amplifies the sense of mortality in these images.

Having never exhibited during his lifetime, Harford is absent from histories of modern British art. Yet his roots at Byam Shaw School of Art, at a seminal moment in the development of post-war figuration, point to affinities with wider artistic trends. His drawings carry echoes as diverse as the paintings of Stanley Spencer, the optical distortions of Max Escher, and the Modernist-pastoral works of Paul Nash. The artist Cecily Brown, Harford’s niece by marriage, recalls that “his drawings were an inspirational presence all through my childhood. I found them mesmerising.”

Paul Anthony Harford was born in Weston-Super-Mare in 1943. As a young married man in the 1970s, he was drawn to the Southend area, where he lived and worked for twelve years, working as an art teacher in Westcliff-on-Sea. He later moved to Weymouth, where most of his surviving work was completed. In 2015, as his health failed, he returned to Southend.