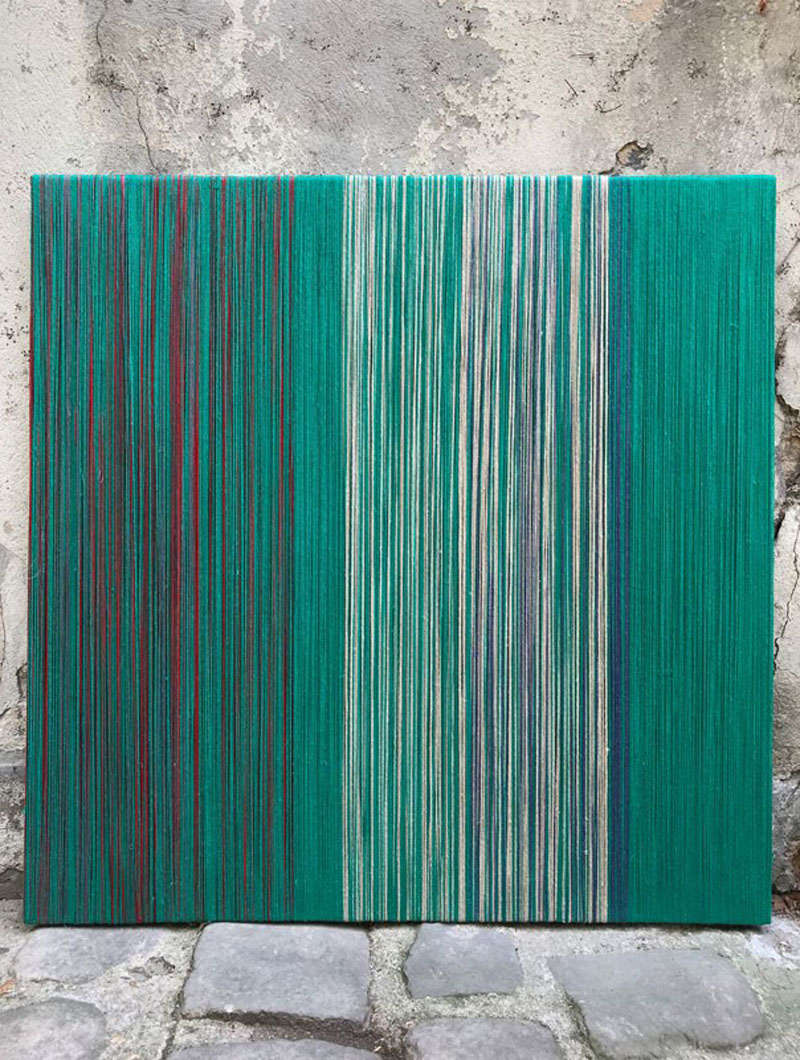 Panta rhei, everything flows. Fundamental to the doctrine of Heraclitus is the axiomatic notion by which everything flows and nothing ever remains still. And while the world, to us, may appear stable, our very existence is subject to constant transformation. In other words, you can never step twice into the same stream: indeed, its waters are no longer the same, and we ourselves have become someone else. This observation, while demonstrating the continuity of all things, also makes us all too aware of the unique and irreplaceable nature of the moment itself.

Sheila Hicks, born in Nebraska in 1934, has lived and worked in Paris for over 50 years. She embraces art and life as one and the same, in a fluid and integrated relationship. For her, the medium and the subject matter are as one, as indeed is colour. So when a cascade of linen cords, vertically vertiginous, tumbles from ceiling to floor, it’s a sculpture that floods the open space. And as it springs from its source, it is transformed into a chromatic cataract that turns into a river, but the oeuvre itself always remains in sync with the site it occupies.

Since the 1960s, Sheila Hicks has always worked at the interface between fine arts and applied arts. She sees her work as both process and realisation, and in this regard it is very much an extension of the philosophy that underpinned the Wiener Werkstätte. Established in 1903, this Viennese association of artists was committed first and foremost to making the aesthetic of modernism available to all by reconciling arts and crafts. Hicks works can be traced to the longue history of weaving, particularly influenced by the ancient pre-Columbian tradition. Each of her creations tends to be surprising und unexpected and draws the viewer towards an instantaneous experience.

Transgressing boundaries is also the focal point of Judit Reigl’s artistic concerns. Born in Hungary in 1923, she fled her homeland gripped by Stalinism and arrived in Paris in 1950, a city she would never leave. The technical aspect of her work is all important. Reigl paints her canvasses using instruments she makes herself, occasionally applying the paint directly, by hand.

With her fluid and natural manner, Reigl operates between abstraction and figuration. Her canvasses assert that throwing off the shackles of traditional painting passes through the material itself by incorporating the irrationality and unpredictability of the artistic gesture. The series Déroulement for instance stands out by virtue of the absence of a beginning and an end, an upside or down, without any limits other than a thin sheet of cotton permeated by colour as it takes possession of it. The paint at last is as close as possible to the creative act that determines it, its traces and rhythms kept vibrant by the artist. Just as, according to Heraclitus, water dissipates only to gather again, Judit Reigl’s flowing material seeks and surrenders, ebbs and flows. The dense intertwining of heterogeneous elements ever present in the painter’s work echoes the effervescence and multicultural richness that once characterised Vienna at the turn of the last century.
Julia Garimorth