This exhibition brings together work by nine eminent artists who mastered both painting and sculpture to formulate a unique artistic language. Presenting paintings and sculptures by Alberto Giacometti, Willem de Kooning, Georg Baselitz, Dana Schutz, Martin Kippenberger, Eric Fischl, George Condo, KAWS and Jeff Koons, the exhibition highlights some of the key moments of post-war and contemporary art. With their uncommon command of each medium, the artists here present distinct strategies of engaging with the notions of physical space and pictorial depth, surface and substance, using one practice to inform the other. 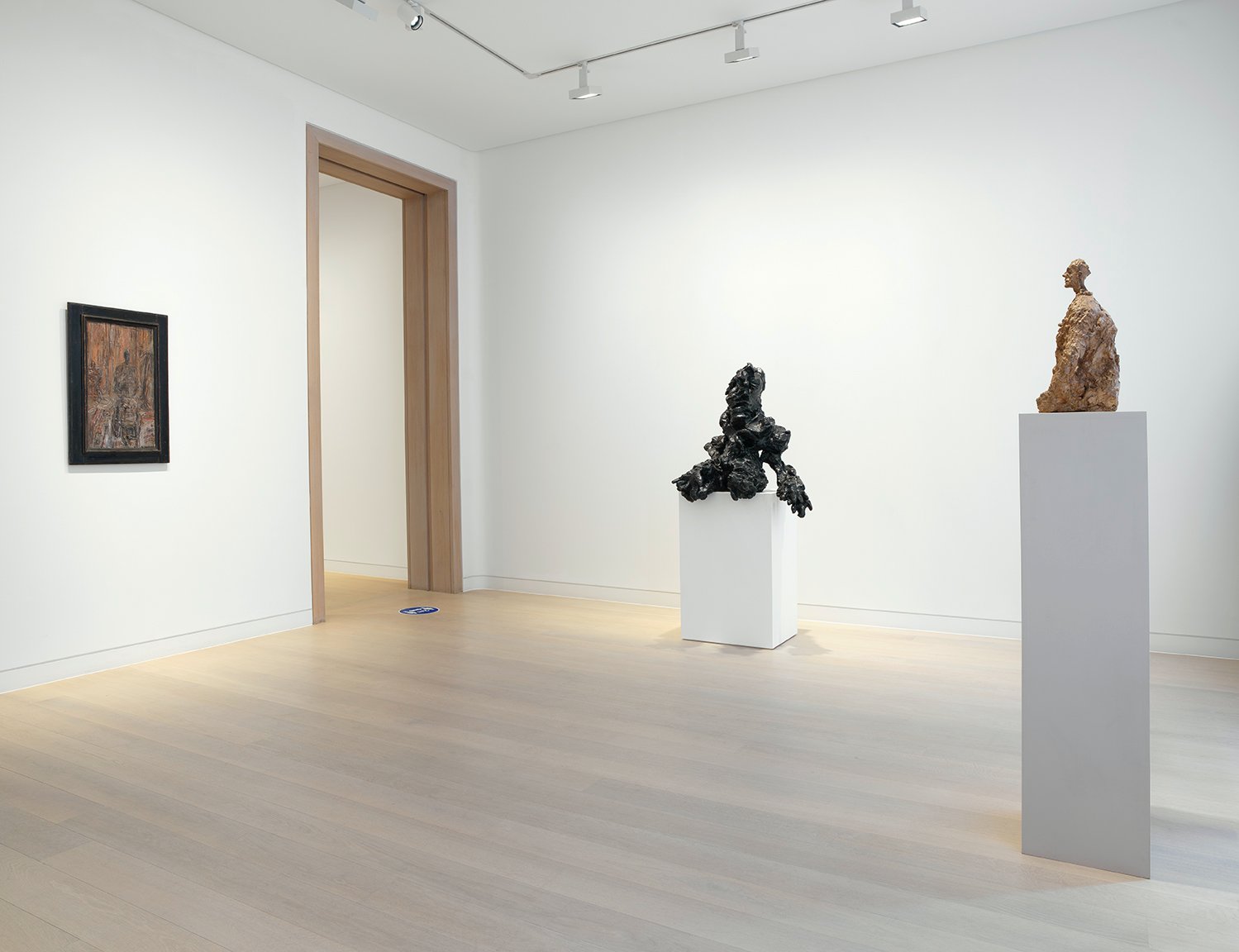 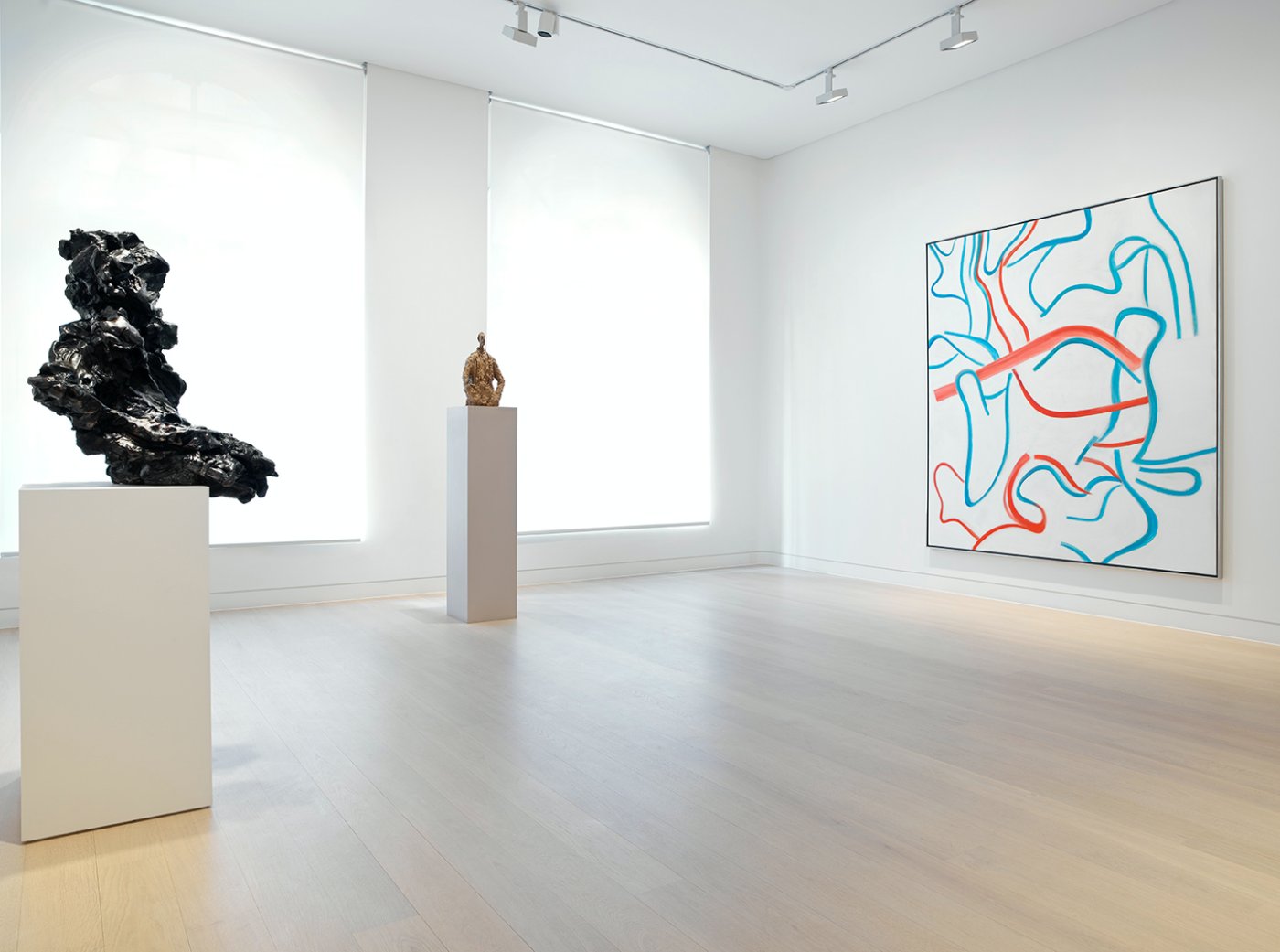 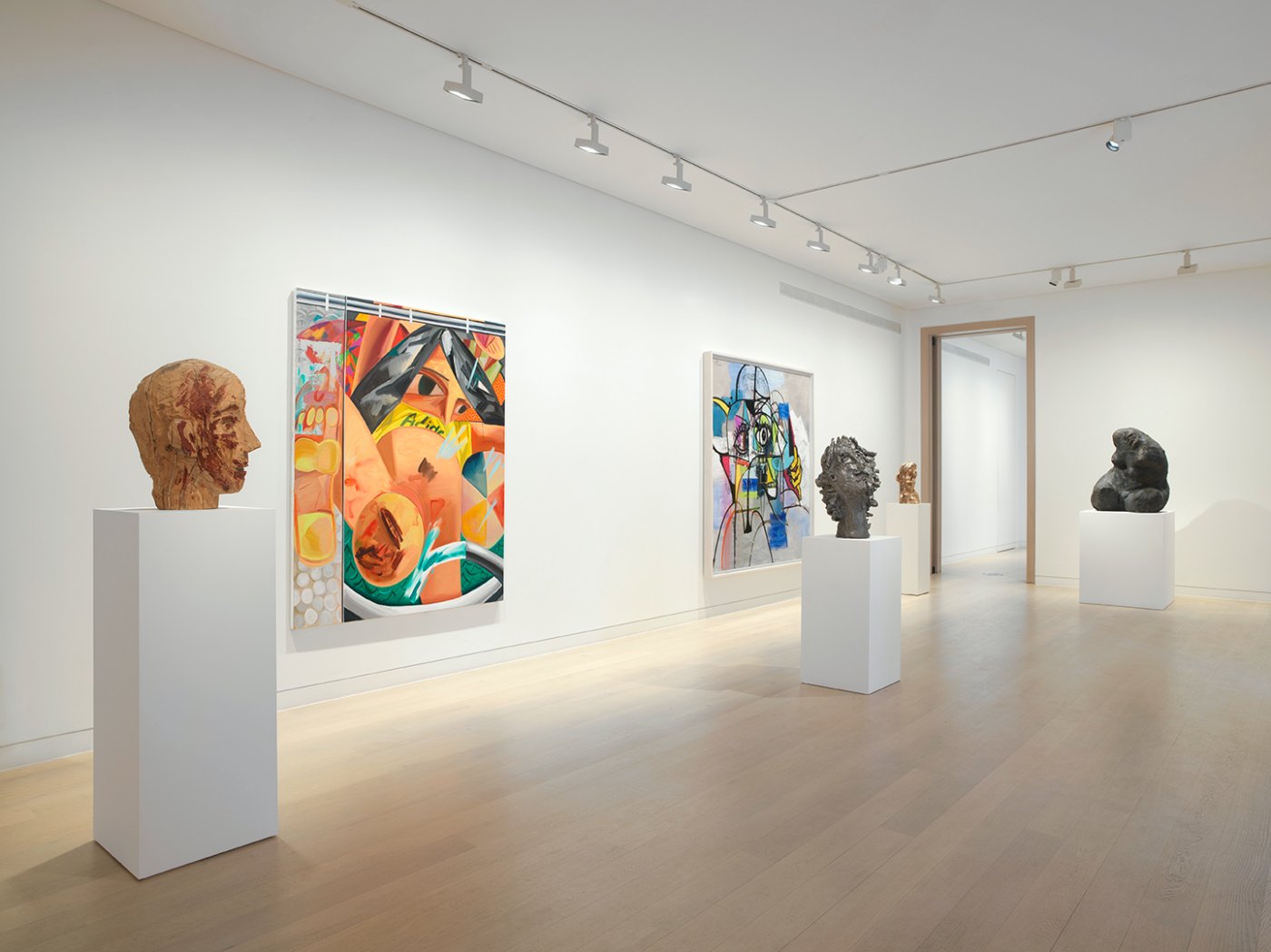 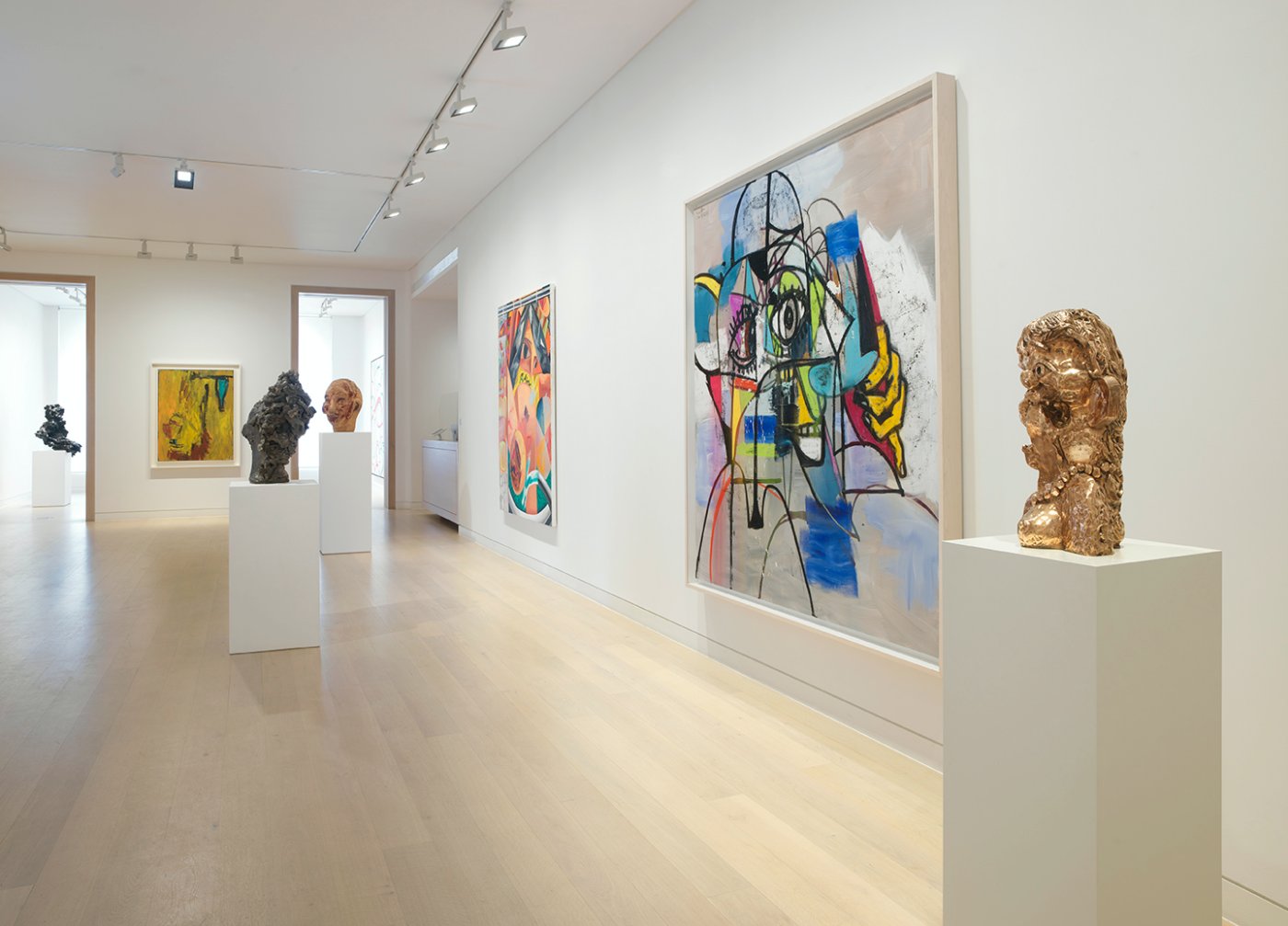 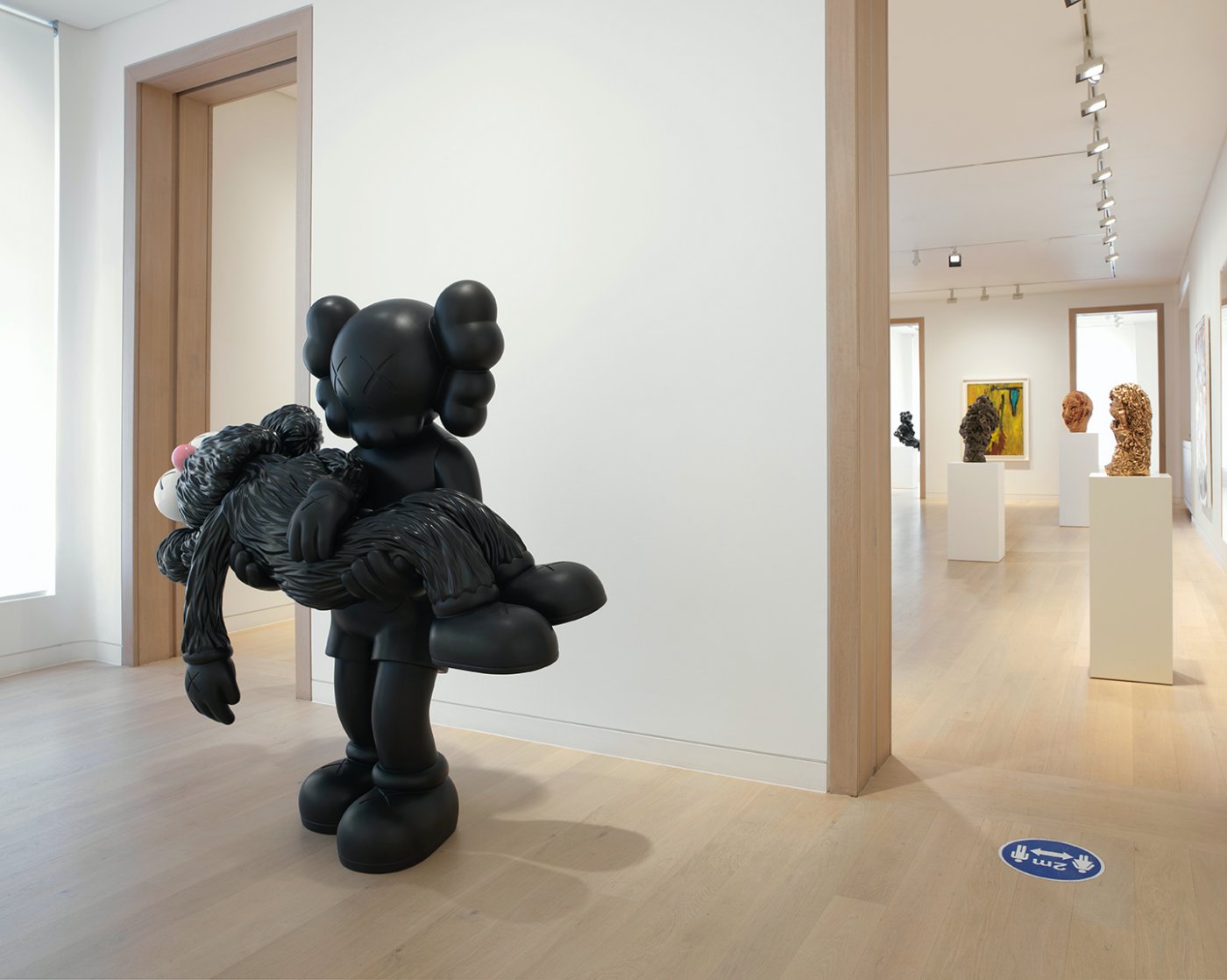 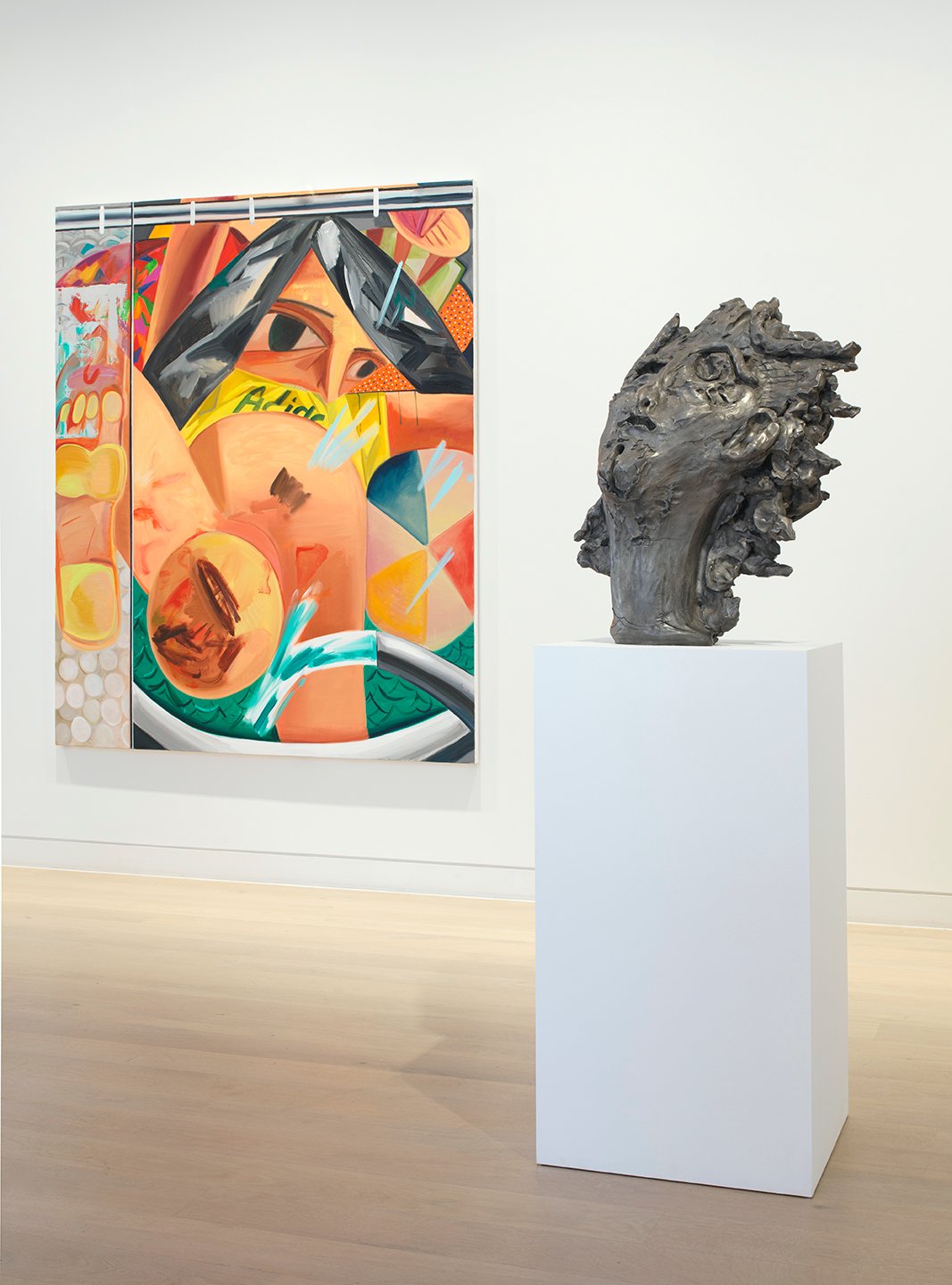 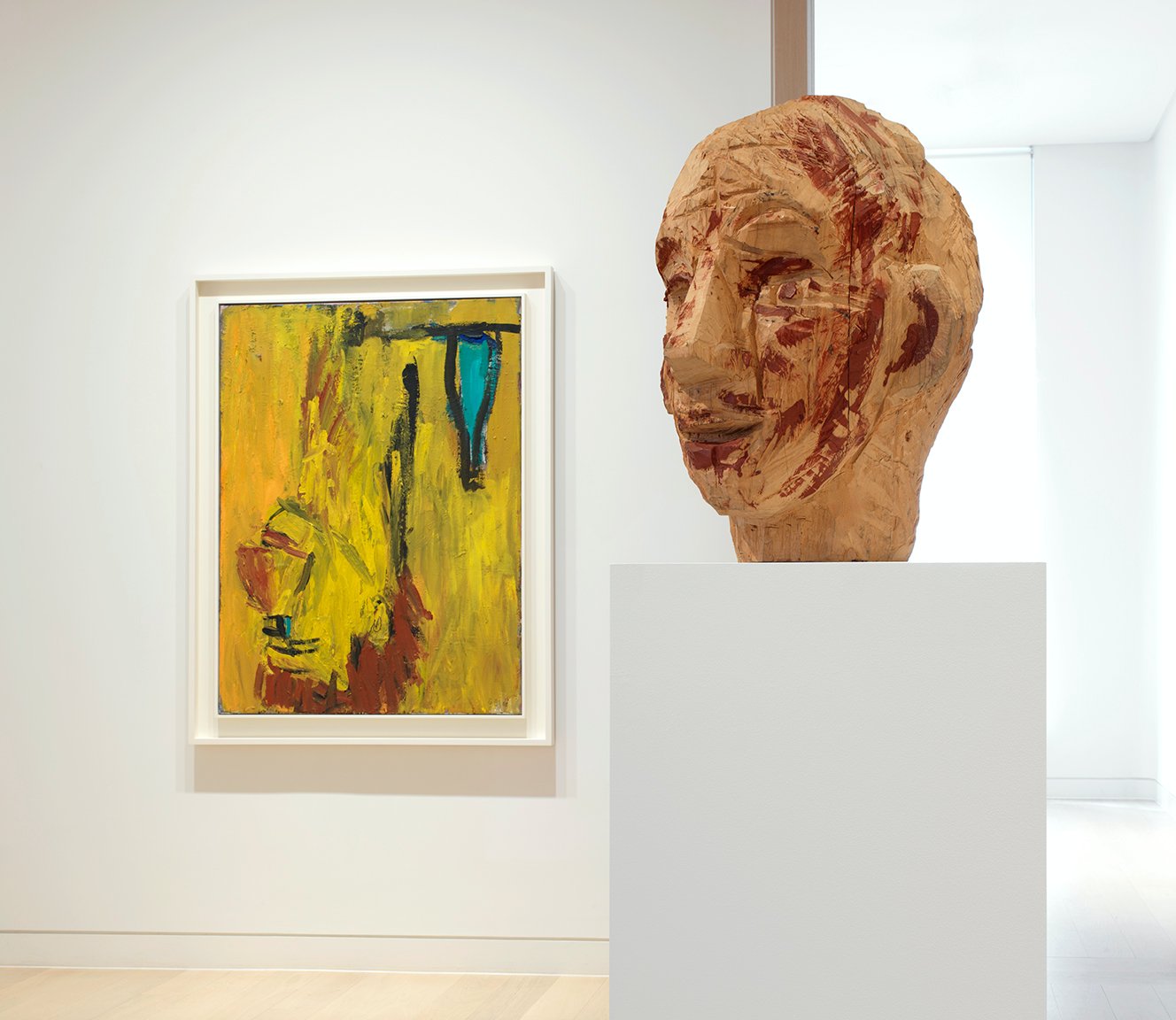 A painter conjures an illusion of space on the canvas, which nonetheless remains physically impenetrable; sculptor’s work, on the other hand, enters the world of the viewer with the palpable immediacy of bodily presence. As the art historian Anne M. Wagner writes, “sculpture devises ways of making the human image tangibly present in space as body and thing. […] Sculpture, we might say, impacts space the way a musical instrument reshapes the sounding air with every note.”[1] Synthesising and alternating between these dimensions, the painter and sculptor evolves an intense sensibility of the physical impact of their work on the viewer, and on the environment in which it is situated. As Dana Schutz explained in a recent interview: “I was thinking about [the materiality of painting] recently, especially with [regards to] sculpture. I think what is more important is how it exists in a physical space, when you’re standing in front of it. Of course, paintings are physical objects, but images really have no body, no size. I want my subjects and paintings to feel like they have a space in front of the picture plane, that’s a specific physical interaction with the viewer.”[2]

From Giacometti’s preoccupation with situating the figure in space, to the tactility of de Kooning’s painterly and sculptural surface, to the expressive energy of Baselitz’s paintings from the 1980s and 90s, the works included in Painter / Sculptor exemplify this distinct awareness of the space defined by an artwork.

The paintings of human figures by Alberto Giacometti are crucial to understanding his late sculptures. In Femme Assise (La Mere de L’Artiste, 1947), the face of the artist’s mother recedes into the background, as her hands and legs appear disproportionately closer to the viewer. The multiplicity of perspectival lines leading to the sitter exacerbate Giacometti’s deliberate distortion of depth and width, alerting the viewer to the sense of distance of the figure in space. This principle achieves further intensity in Diego au Chandail (1954), Giacometti’s later sculptural portrayal of his brother, who was one of his most frequent and important sitters. Modelled in plaster, the worked surface of Diego’s voluminous sweater underscores the diminution of the head and its powerful concentrated energy. Painting over this unique sculpture, the artist reveals the significance of painted surface in his oeuvre.

Renowned for his paintings and drawings, Willem de Kooning first turned to sculpture in the late 1960s producing works of striking intensity. Modelled in wet clay and subsequently cast in bronze, Large Torso (1974) amasses volume in layers, conjuring an irregular surface reminiscent of Giacometti’s late sculptures. Registering the physicality of the working method, de Kooning’s sculptures can be seen as a three-dimensional extension of his paintings. Indeed, the artist preferred working in wet clay precisely due to its resemblance to oil paint. As George Condo has also remarked, “[in his sculpture, de Kooning] literally created his paintings out of clay.”[3]

In Brainscape (2018), George Condo reveals his unwavering interest in three-dimensionality and fragmentation of pictorial planes, which also fuels his sculptures. Depicting intricate contours of a human figure, the artist constructs a dynamic portrait which evades the representation of a fixed identity. The subject’s eyes and features open to different planes, portraying a disoriented mental state amid the fast-paced contemporary life. For Condo, the intention behind the work is to reveal the ‘inner feelings of the subject which in turn become the basis for their external appearance.’ This principle is also evident in his complex sculptural portraits, such as Young Woman with Pearl Necklace (2005). Reflecting the malleability of the artist’s materials, the work presents almost surreal distortions of human features, creating a distinctive sculptural surface.

The tactile surface quality offered by the sculptural medium is also important to Georg Baselitz, who produced his first wooden sculptures in 1979. For each work, the artist selected a single tree, cutting into the trunk with a chainsaw, chisel, and axe until a figure emerged. Often painted over, the chipped surface of the sculpture mimics the dynamic brushwork and vibrant palette of Baselitz’s paintings from the 1980s and 90s. As the artist explained, “In sculpture, using the saw is an aggressive process which is the equivalent of drawing. It’s a linear signal.”[4] In Drinker (1981), the artist articulates the figure in energetic linear brushstrokes reminiscent of his sculpting motions to create an expressive powerful image.

Pioneering new approaches to the readymade, the sculptures and paintings by Jeff Koons explore the psychic modes of desire, pleasure, and social interaction. In Jim Beam – J.B. Turner Engine (1986), the artist casts a replica of a bourbon collectible in stainless steel, querying the significance of rare luxury objects in the contemporary culture. Through his conscious choices of materials and subject matter Koons constructs images designed to have specific intellectual and physical effects on the viewer. As the artist later explained, “It was about creating something that you’d desire. I wanted to create work that people would be attracted to.”[5]

The impact of the readymade iconography on sculpture is also an important theme for KAWS, who evolved his approach to the medium from producing editions of his characters on a small scale. In GONE (2020), KAWS fuses his iconic characters COMPANION and BFF with a reference to a Renaissance pietà, presenting a work of palpable monumentality. The black glossy finish covers the figures cast in bronze, a traditional medium of classical sculpture. The immaculate layer of smooth paint conceals the traces of the gestures of the hand, staging a calculated tension between the unique and mass-produced, which is also manifest in his paintings, such as his tondo UNTITLED (2015).