In the transition from Symbolism to international modernism that occurred between Ferdinand Hodler and Mondrian, no other Swiss artist succeeded in creating an oeuvre as confident and idiosyncratic as that of Otto Meyer-Amden. Born in 1885 in Bern, Meyer initially trained as a lithographer before attending the School of Arts and Crafts in Zürich. Following a semester at the Academy of Arts in Munich, he joined the Royal Academy of Fine Arts in Stuttgart in 1907, where he studied for a short time under Adolf Hözel, whose interest in abstract formal principles set him apart from the prevailing naturalism of the time. It was there that he encountered Willi Baumeister and Oskar Schlemmer, with whom he would go on to maintain a close exchange until his death, exerting a strong influence on the pair. Otto Meyer’s first important works were created on the fringes of the academy or even outside it: the monumental and auratic bronze head, the figures Schlemmer termed “archaic Apollos.” After he had left the academy he started to produce delicate small-format paintings depicting people playing sport, walking, or on horseback; already, here, one clearly recognizes the way in which Meyer manages to imbue his observations of everyday scenes with an element of the unreal that goes beyond the sensible. In 1911, Meyer completed his mysterious “Gärtnerbild” [Gardener picture] in Stuttgart (today housed at the Kunsthaus Zürich), a work that represents the quintessence of his considerations about a form of painting that manages to both present our perception of visible reality while at the same time also reflecting upon it.

That this painting remained the only finished one in Meyer-Amden’s body of work is typical for his artistic practice. All subsequent works are studies, even when meticulously executed and fully completed, as the artist saw them as stations along a path to a work that was planned but ultimately remained unrealized and unreachable. These studies were produced in seclusion, as Meyer relocated in 1912 from Stuttgart to the mountain village of Amden, whose name would later be added to his own, and where he lived in humble circumstances until 1928. In this year he moved to Zürich, where he taught at the School of Arts and Crafts up until his death in 1933.

While the early works that Meyer-Amden produced during his time at Amden were landscapes and interior scenes, he was equally engaged in questions of mystical speculation, as evidenced by his watercolor of a temple building. It was in these years that the artist started to draw countless studies of young boys, many of which were produced in preparation for a graphic print commissioned by the Schweizerische Graphische Gesellschaft (Swiss Graphic Society) in 1922. Both the motif and its execution in pencil are reminiscent of the figures that appear in the complex graphite drawings Meyer-Amden created during World War I. Only a small number of these nude studies can be described as naturalistic; more frequently, they represent attempts to find stylized idealizations for the naked body. In formulating the works this was often manifested in a frontally positioned hieratic figure, in contour work, and in accentuating eye and mouth by shading to suggest aureolas. The figures were released from their symmetrical pose around 1920, with finely hatched body parts creating a luminescence that seems to express an interior glow. Meyer-Amden removes the boys from a realistic environment in order to achieve a formulation that distances itself from bodily individuals and refers instead to an existential condition. The nakedness of the figure no longer implies a nude study alone, standing too for a mythical and primal bodily presence. Any symbolic interpretation of Meyer-Amden’s work must respect his process-driven artistic thinking, whereby motifs drawn from the artist’s own life underwent a rigorous process of treatment. In a text on this subject, relayed by Schlemmer, he said of this: “The pictorial motif we present is not some ‘high’ and remote idea, but something close by; it’s an instinctive movement within the artist who is working. […] When the artist strives to capture this inner movement in the form of a pictorial motif, he feels the sense of it as being foreign to himself diminish, as it increasingly approaches the other purified elements involved in creating an image, until finally he pronounces: it is the only thing, a pure thing, the motif itself.”(1)

Figures were to remain the central motif of Meyer-Amden’s work, no longer isolated but integrated into the space around them. By around 1918, Meyer-Amden had already found the motifs that would occupy him until the end of the 1920s – the dormitory; the schoolchildren with their hands raised in the air; “anticipation,” “preparation,” and “inoculation.” Each of these scenes marks a return to the artist’s lived experience, and above all to his school years, spent in an orphanage in Bern. This was a boarding school that provided a military-like education to the children of many of Bern’s families. Meyer-Amden looked back on this time with affection, and his conception of the world remained rooted in the uniformed boys and the system of rules presiding over them, the latter providing the basic framework for his pictorial arrangements. Of all of Meyer-Amden’s pictorial themes, “preparation” was the one he engaged with most extensively. An initial study is dated 1918–1919, with complete horizontal-format compositions following in 1922, produced in several different versions. The subject is morning prayer in the boarding school’s dining hall: the boys sit facing each other at horseshoe-shaped and symmetrically arranged tables, so that one sees the rows of those seated from both the rear and the front. In their hands they hold open hymnbooks, the bright edges of their pages structuring the composition. In the center of the image stand two boys, the precentors whose singing begins the prayers. In a note, Meyer-Amden made reference to the symbolic dimension of this scene, which he related to the idea of communion; in the broadest sense, “Vorbereitung” portrays a collective act of congregation and concentration in expectation of an anticipated event.

This composition by no means marked the end of Meyer-Amden’s engagement with the theme; he continued the motif by turning to further figures, arranged both individually and in groups. The head pictures in particular, individual portraits that emerged from the ensemble of boys at the end of the 1920s, are much more painterly in their execution than earlier works, with flatly applied gouache replacing colored pencil. It’s striking how Meyer-Amden rhythmized the image, by carving out forms that manage to bring the head into unity with the painting’s ground and the secondary figures still visible at the image’s edge. Meyer-Amden’s desire to avoid interpretations of any kind means he can be seen striving for the abstract form even when producing a portrait. As he himself said: “The mystical, the devout, or anything similar are alien to me as a painter, and certainly no goal. Rather: awareness, order, a resonance that emerges from this order …”(2)

In 1923 Meyer-Amden was commissioned to design a glass window for the Zwinglihaus in Zürich, a gathering place for the local protestant community. In keeping with the location, he chose an ecclesiastical motif that had appeared in many variegations in his drawings: boys sitting in church pews, “waiting, with a certain strength and the greatest possible harmony, for new strength and greater harmony.”(3) Sat in their blue uniforms, the boys appear as a grid formation superimposed over the tondo. The figures are interwoven into the space around them using primary colors. When realized two years later by a glass painter, the window brought Meyer-Admen’s pictorial concept to bear: a unity of pictorial elements “wanting to do justice to both the cosmos and the square”(4); to ideally connect concept and form.

Following Meyer-Amden’s death, the art historian Sigfried Giedion pointed out the surprising fact that the artist had oriented himself toward the human figure while working within an epochal style that strove for abstraction and was bent on achieving pure objecthood. In describing this mode of representation, one that forgoes any and all individuality, Giedion cited the figures on the early Gothic portals at the cathedral in Chartres as models.(5) Meyer-Amden’s representation does not exhaust itself in the figure per se; rather, it is the expression of a particular experience, bringing forth a form that is simultaneously both objectified and constructed – for him, the one always presupposes the other. In both, an ideal movement formulates itself that extends beyond the sensible, and in this sense Meyer-Amden’s work approached that of those artists of the era who were pushing for immaterial formulations in their practices. Similarly to Schlemmer, he was guided by a desire to find an alternative path, one located away from a modernism rooted in formalism and dominated by Cubism. The similarities between the ideas of the two artists could be particularly observed in the closing years of the 1920s, in the way both would disembody the figures they portrayed. This in no way contradicts the idea of spatial perception; rather, both artists found that drawings and watercolors offered them ways to evoke the modelling of the body and face, through successions of curved lines, and in this way to ecstatically elevate them in their being within space. It’s no coincidence that Mondrian was mentioned at the start of this text, since in 1925 Meyer-Amden expressed his admiration for his work in a letter to the architect and later Bauhaus director Hannes Meyer as follows: “The beauty with which he states his conviction, and with which he himself seeks to convince, is for me always moving, and it is essential.”(6) 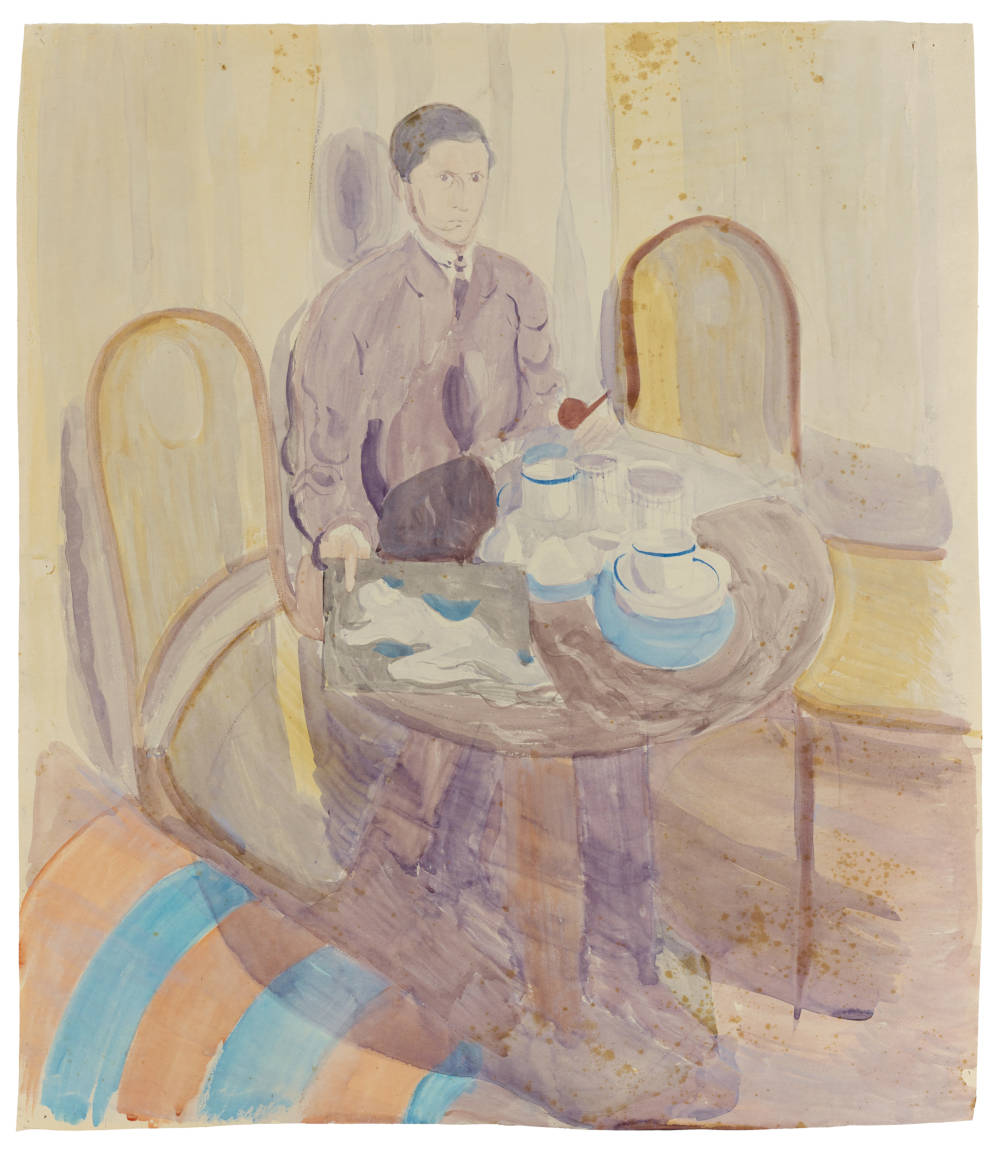