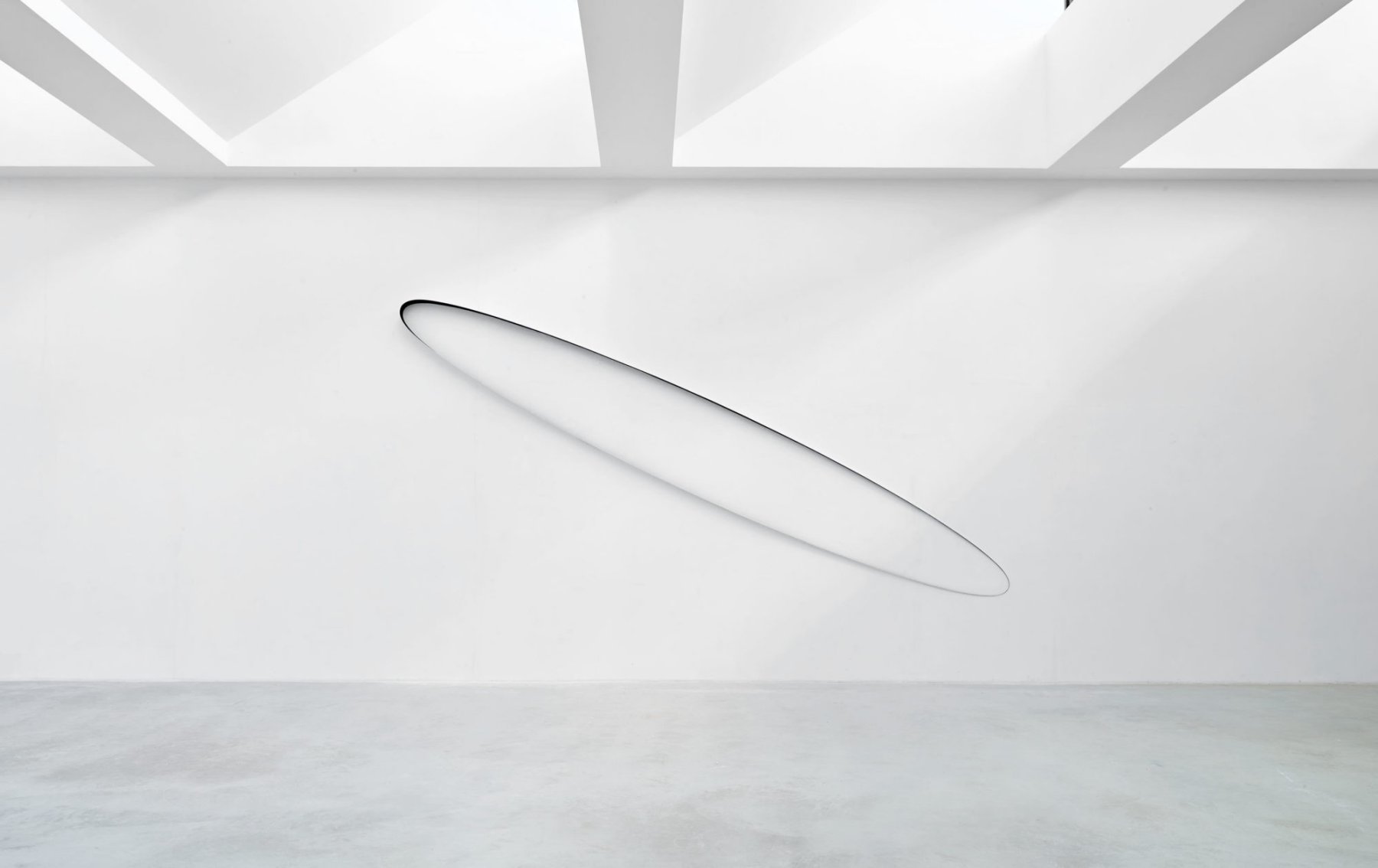 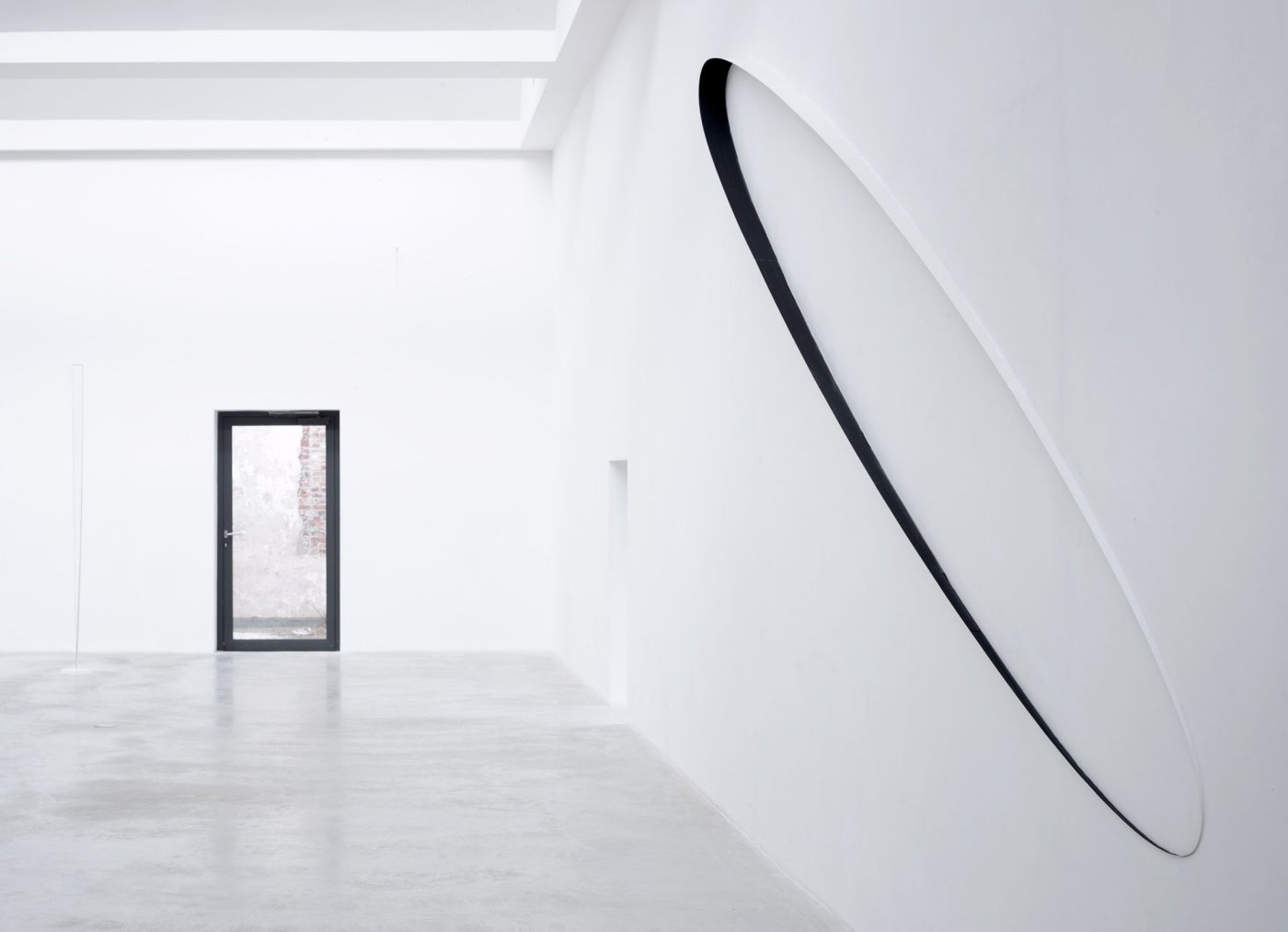 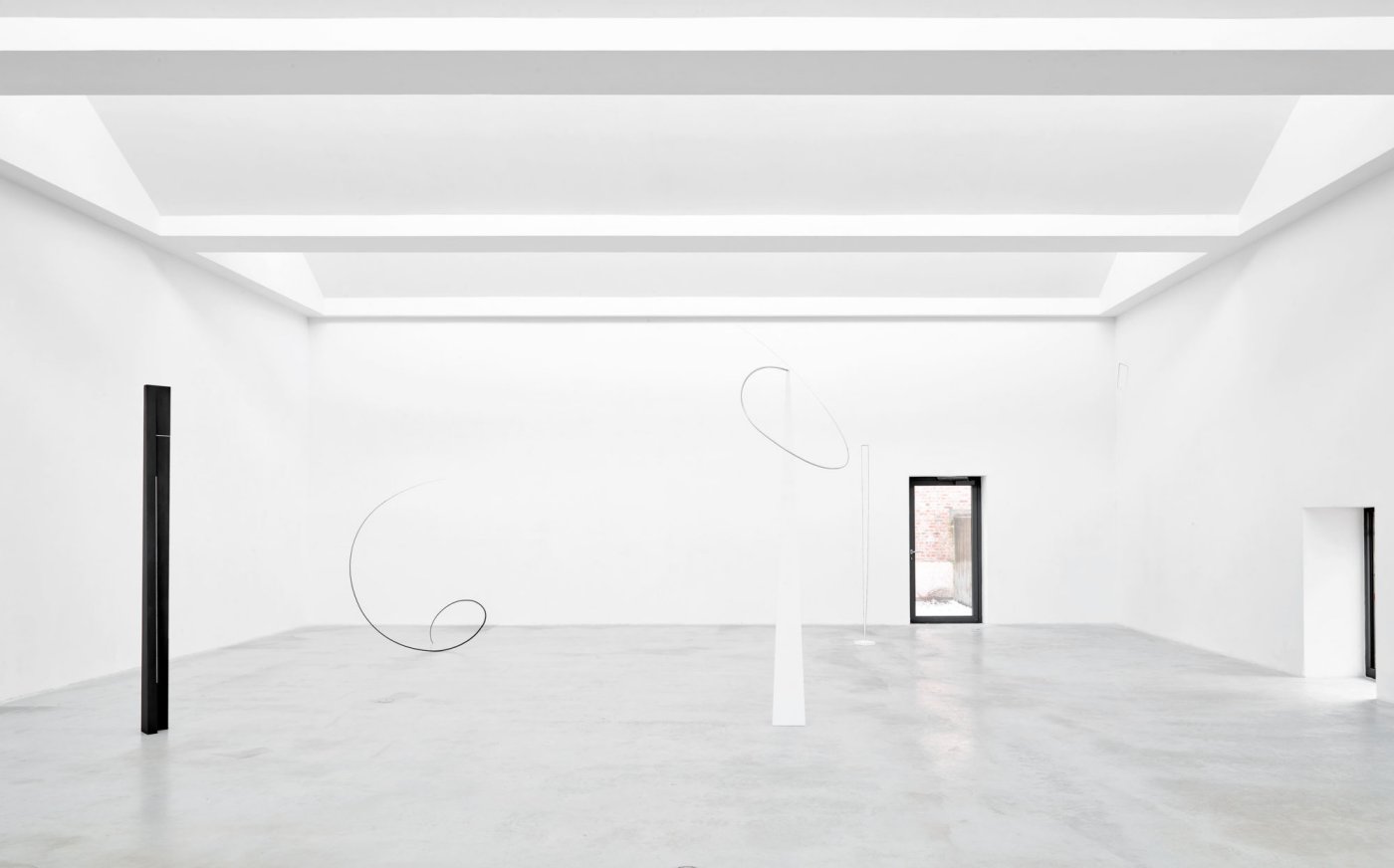 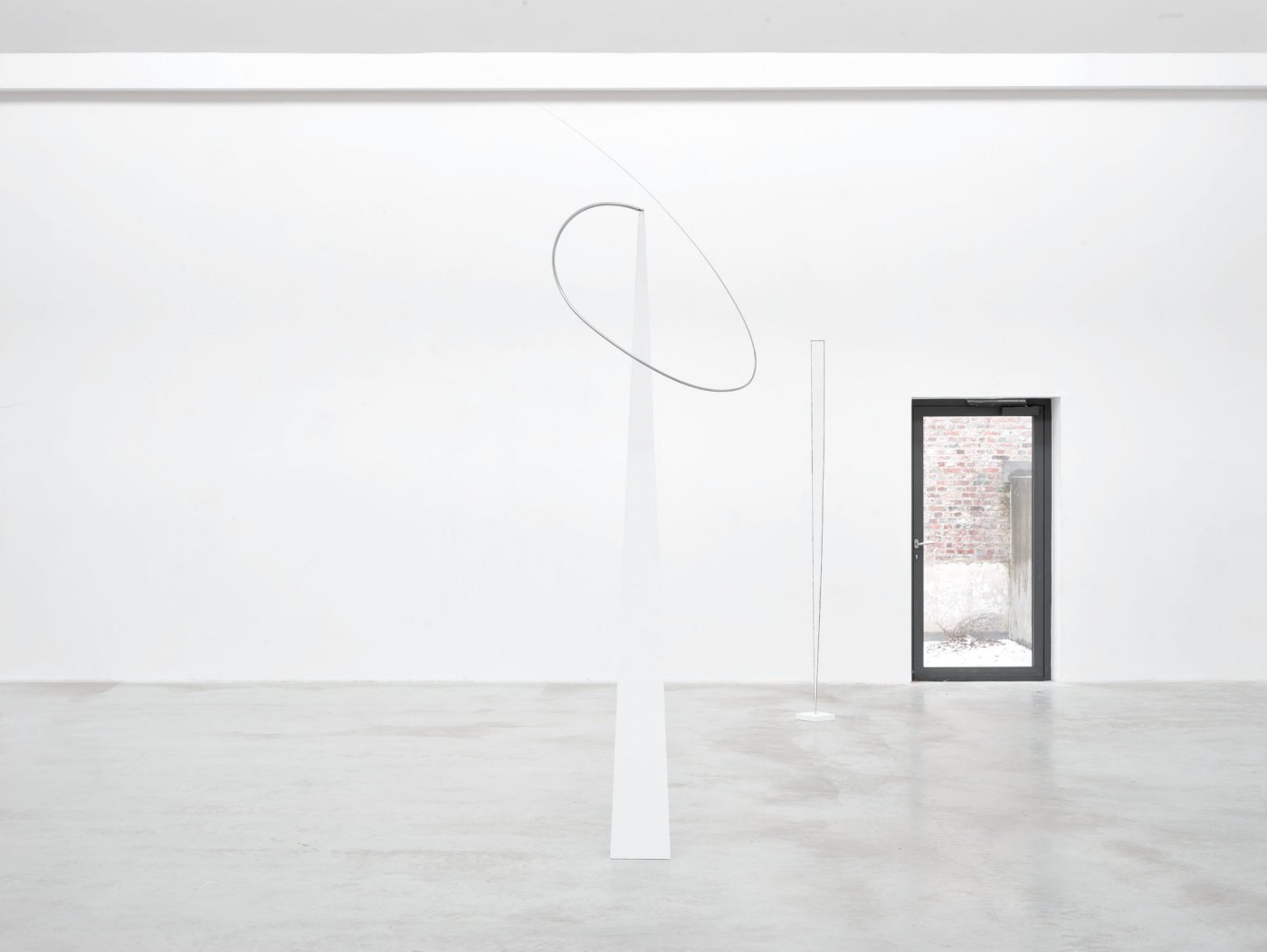 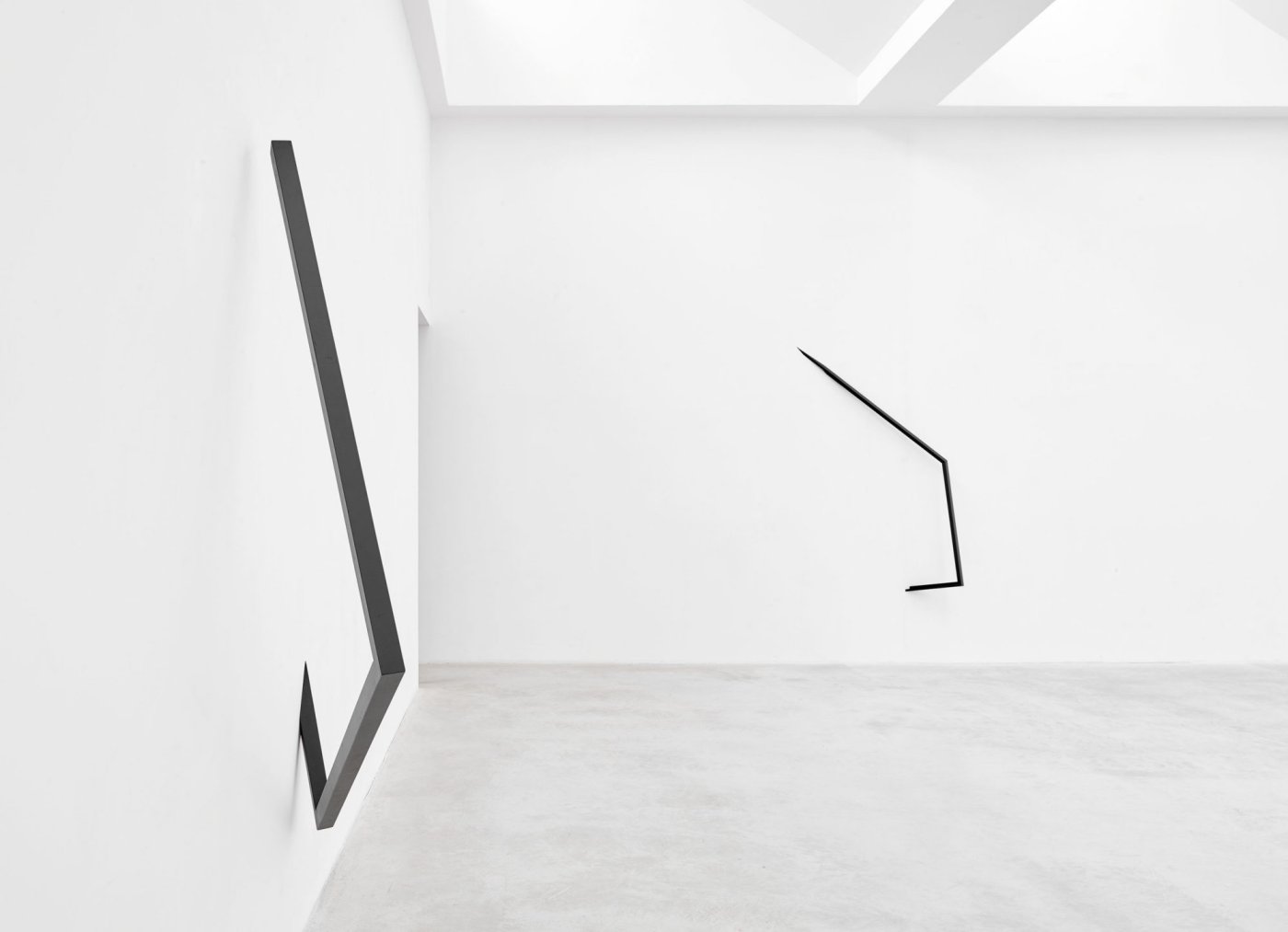 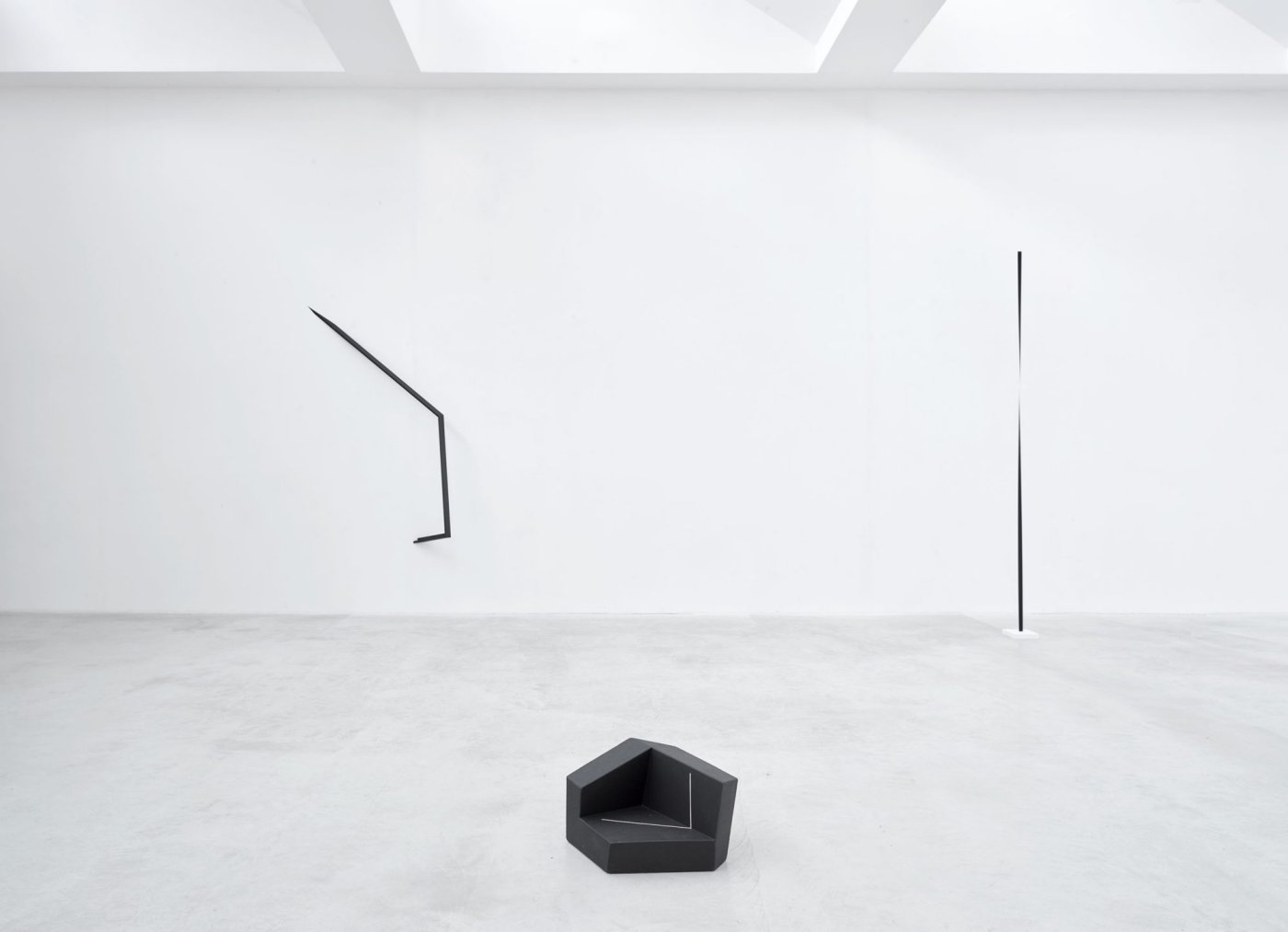 The exhibition is about finding words with, about, and through the works of art, as a result of the interaction between viewer and creation. The exhibition includes 10 sculptures, in which the fundaments of his practice are present. The works radiate tranquillity and harmony, discreetness and preciseness, and with characteristic forms that seem to hover in space.

Form, the way something is shown, is essential, Sontag wrote in 1964 in her seminal essay “Against Interpretation”.[1] It’s not only the form of Boll’s sculptures that resonates with this quote but also how they manifest themselves in space: apparently floating on nylon threads or with a fine chalk line against a black background; as subtle eruptions from the surface of the wall or as robust articulations of the contours of its surroundings. Boll’s creations oscillate between presence and absence, the seen and the unseen, suggesting both materiality and the void.

“A void for me is a beginning. There is nothing and from this point, you have to start anew. And to have the feeling of the void in the back of your mind, it’s just like looking for another country. It has something to do with possibility. A sense of the known possibility is necessary for combination with the void. On the one hand, there is nothing, but from this point onwards I start to build something, and it has to fill the nothing with something I do by myself,” Boll states.[2]

For the artist, language is a framework, “a constant companion” in the discourse of his work.[3] Boll invites the viewer into a sculptural event, the conception of solidity fading. The minimalist sensibility appeals to human feeling, the bodily sensation. Words try to develop between the heart and the brain, between perception and production. Language occupies a fundamental role in the sensations of the whole body and is always present. Boll’s words are not about the content of the work, but about its genesis, or the feeling that describes the visual idea. It leads to reflections, not to interpretations. It is precisely this tranquillity, free of interpretation, that Boll’s work refers to.

The approach to spatiality that characterises Boll’s works is not very different from that of Lucio Fontana, who created a void; invited a space to enter through slashes and holes in his work. By doing so, Fontana wanted to show real space, behind the canvas, as opposed to the two-dimensionality that had long been a defining characteristic of painting. Even before he applied his first Tagli (‘cuts’) in 1958, Fontana tried to use brightly coloured paint to connect the material with space. “Colour in matter, developing in space, assuming different forms,” he wrote in his famous 1946 manifesto.[4] The light installations that Fontana made in the following years broadened the notion of human experience to include sculptures in the space in which the viewer finds himself. At the same time, he broke through the dichotomy of artwork versus exhibition space.

“These artists,” as art historian, critic and museum curator Margit Rowell wrote about Fontana, Luciano Fabro, and German-born Eva Hesse among others, “explored similar ideas beginning in the 1960s, with a view to stimulating the mind and body’s response to unprecedented physical situations.”[5] The reduced form language of Luciano Fabro’s spatial experiences is also interesting to relate to this. Although he called himself a heretic, the Italian conceptual artist Fabro is associated with the Arte Povera: the movement that sought poetry in known materials. Referring to Fontana, he began his famous series of Tautologies in the 1960s, a term he borrowed from literature and rhetoric. With simple interventions to play on the relationship between his sculptures and their surroundings, he created a suggestion of approach and sympathy.[6]

The mental dialogue that Boll allows his fragile forms to enter into with the mind of us, the observer, is similar to that of Fabro in a way. The invitation that Boll extends to the viewer is located in the mental interspace, which can only be bridged by feeling, sensation, and language. His sculptures call for closeness and presence, he says, at a time when indirectness comes increasingly to the force. Although the experience will differ with each viewing, the physical distance always remains. The question is whether this physical distance is also the substantial, essential one.

However, there is also a fundamental difference in the creation and thinking of both artists. Due to the clear presence of materiality, Fabro’s work always has a subject. Through the metaphorical use of materials – in some cases, marble with veins ­– his sculptures seem inherently human, but also due to the dimensions that refer to his person. There is always a reference to a certain narrative, a certain passage from a certain past. In Boll’s works, the materials, which are black or grey, with occasional white or silvery accents, do not remind one of anything found in the body, nor do the proportions refer to those of a human being. The human element takes place in the space in between, in the relationship that the viewer enters into with the steel, aluminium, or wooden creations.

Introspection, tactility, mental, and physical approach. These are words that have been frequently returning for a year now in various contexts, including in the discourse on art. It makes certain art more urgent, other art more relevant. With his creations, Otto Boll does not want to refer to a certain pattern of thought or a certain form of topicality. To summarise Susan Sontag’s “Against Interpretation”: art does not require interpretation, and certainly not reduction to content. It is the form that is essential; with Boll, the form that invites the viewer to seek, feel, and express their language in new ways.

[1] Susan Sontag, ‘Against Interpretation’, in Against Interpretation and Other Essays (New York: Farrar, Straus and Giroux, 1966).
[2] Interview with Otto Boll on the occasion of Boll’s first solo exhibition in Axel Vervoordt Gallery, Antwerp, 2012.
[3] Otto Boll, ‘Introduction’, in Otto Boll. Sculptures, exh. cat. Sculpture Park Waldfrieden, Cragg Foundation, Wuppertal, 29 June – 22 September, 2019 (London, Cologne: Buchhandlung Walther König, 2019). The introduction to this exhibition catalogue consists largely of a letter that Boll sent to the critic and philosopher Jürgen Morschel in 2003.
[4] Lucio Fontana, Guido Le Noci, and others, Manifiesto Blanco, 1946. Published in 1966 by Galleria Apollinaire Edizioni, Milan. The essay, also known as White Manifesto, was written in 1946 by artists and students in Buenos Aires under the direction of Fontana during his time in Argentina.
[5] Margit Rowell, ‘Luciano Fabro: Timely and Defiant,’ in The Brooklyn Rail (New York, September 2018). Rowell worked at the MoMA, Centre Pompidou, Centro de arte Reina Sofia and other renowned institutions.
[6] In addition, his series Italie and Piedi are particularly well known, as well as Habitat, Attaccapanni and Arcobaleni.