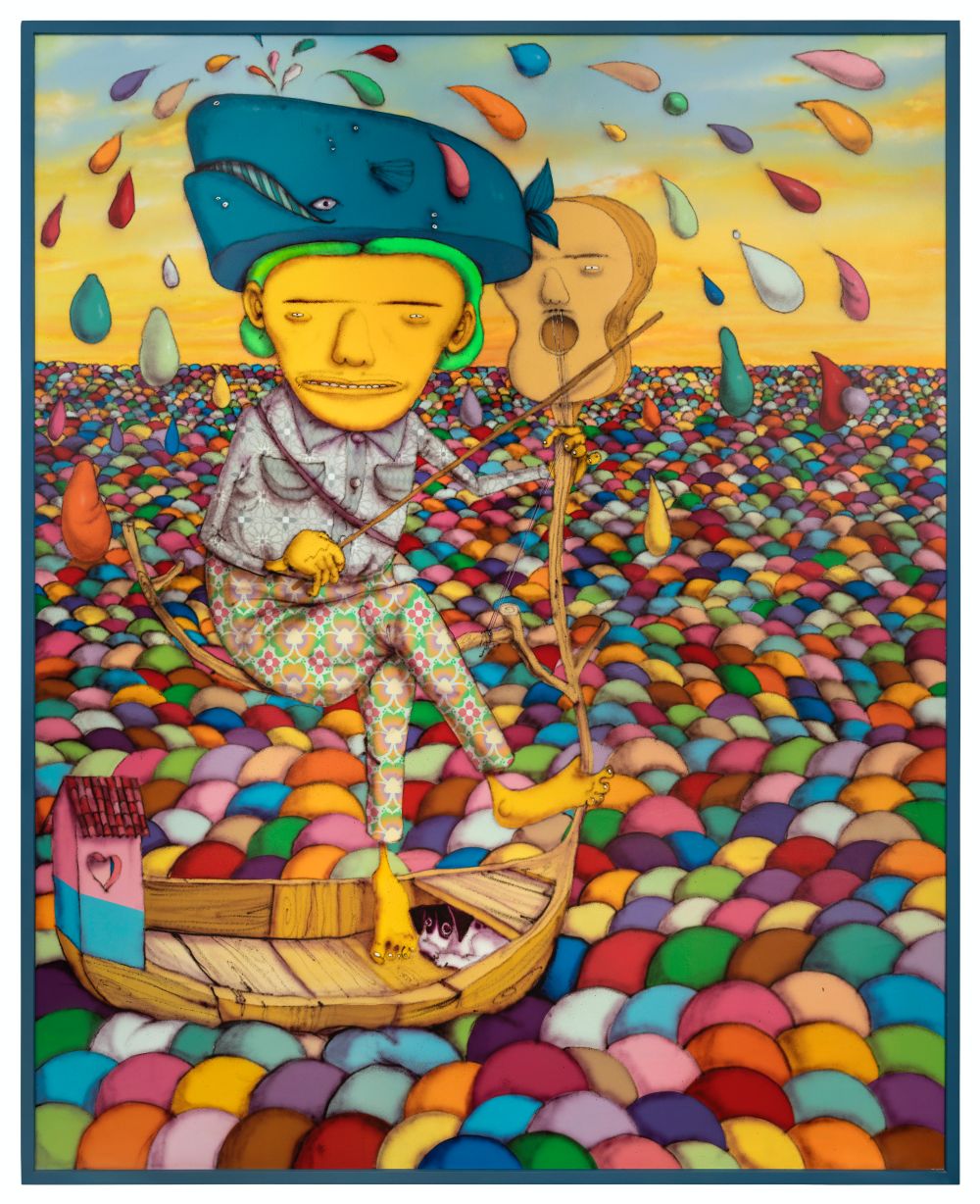 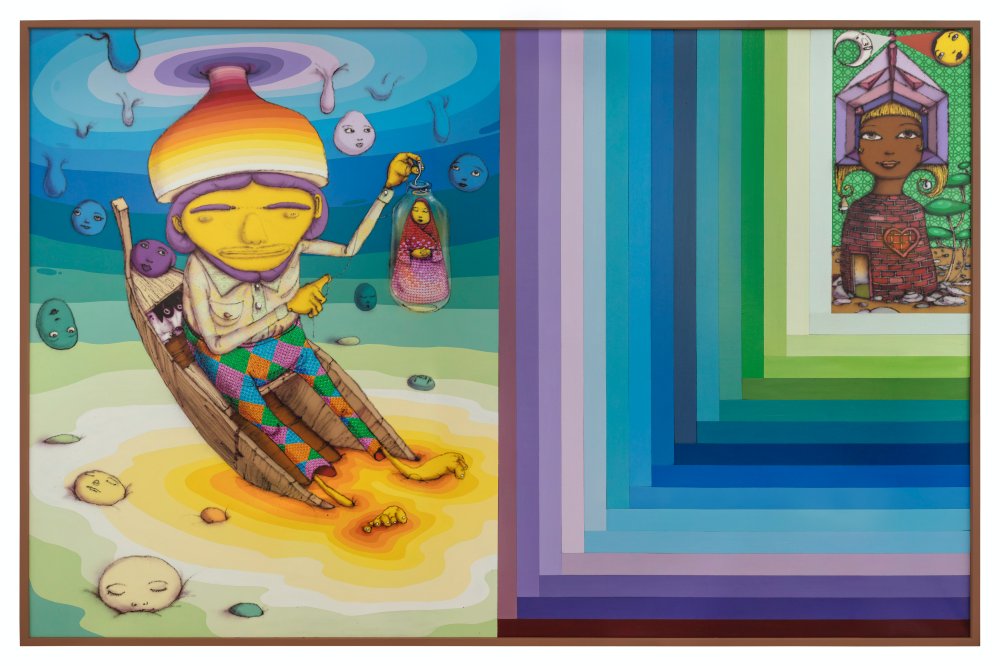 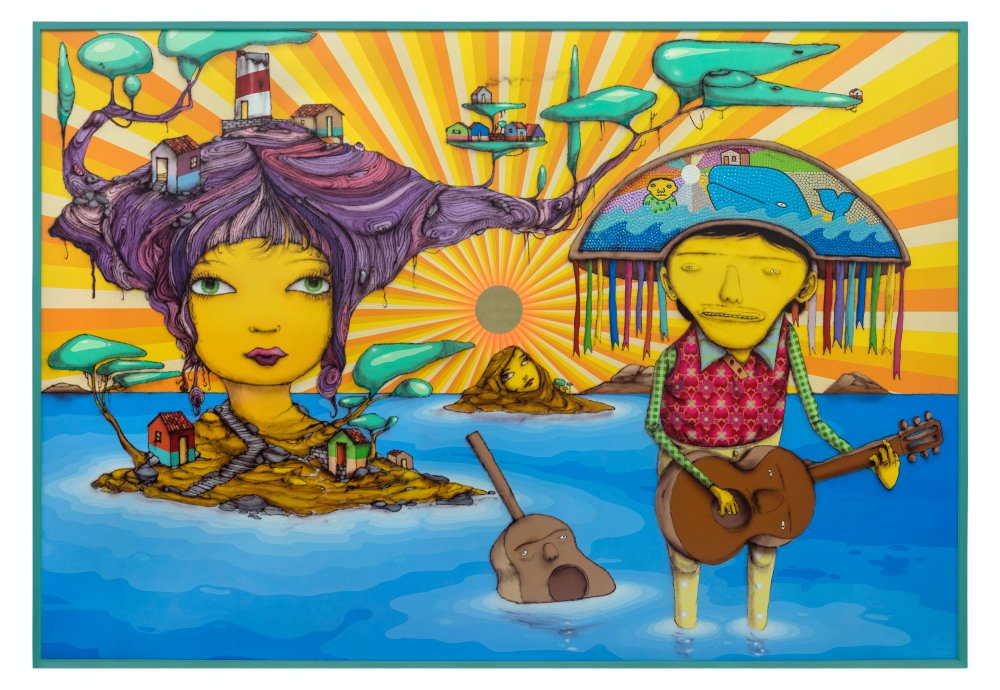 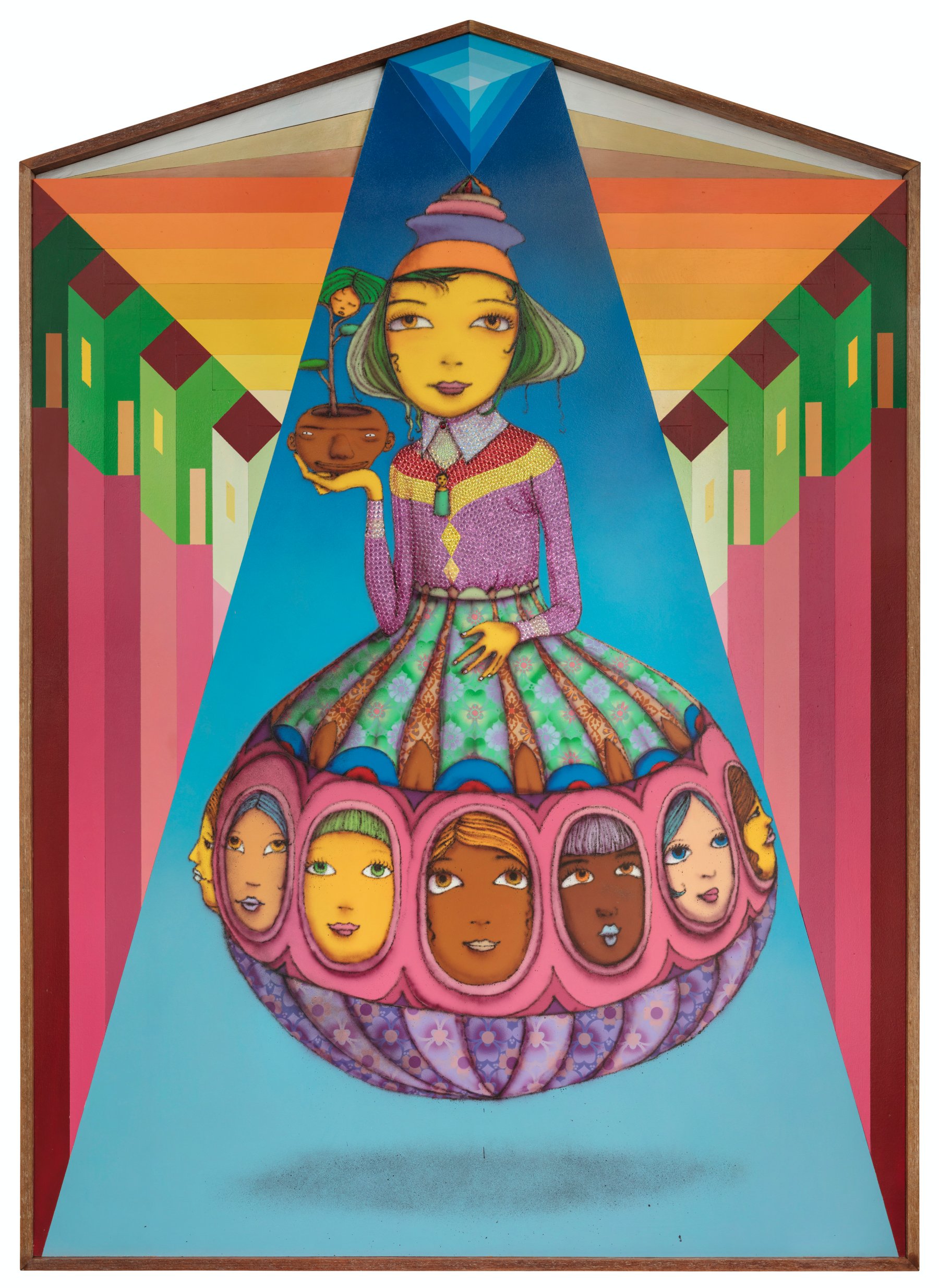 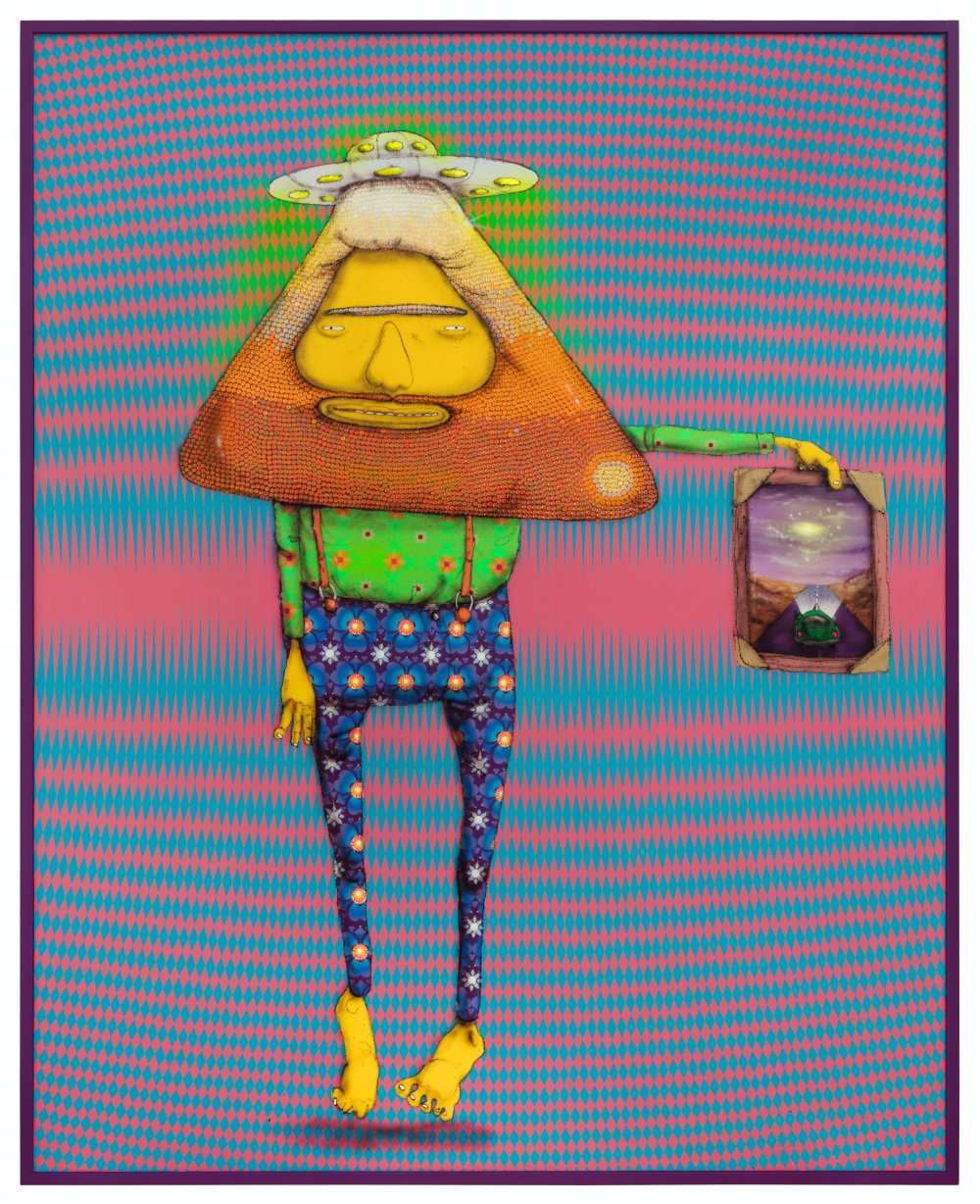 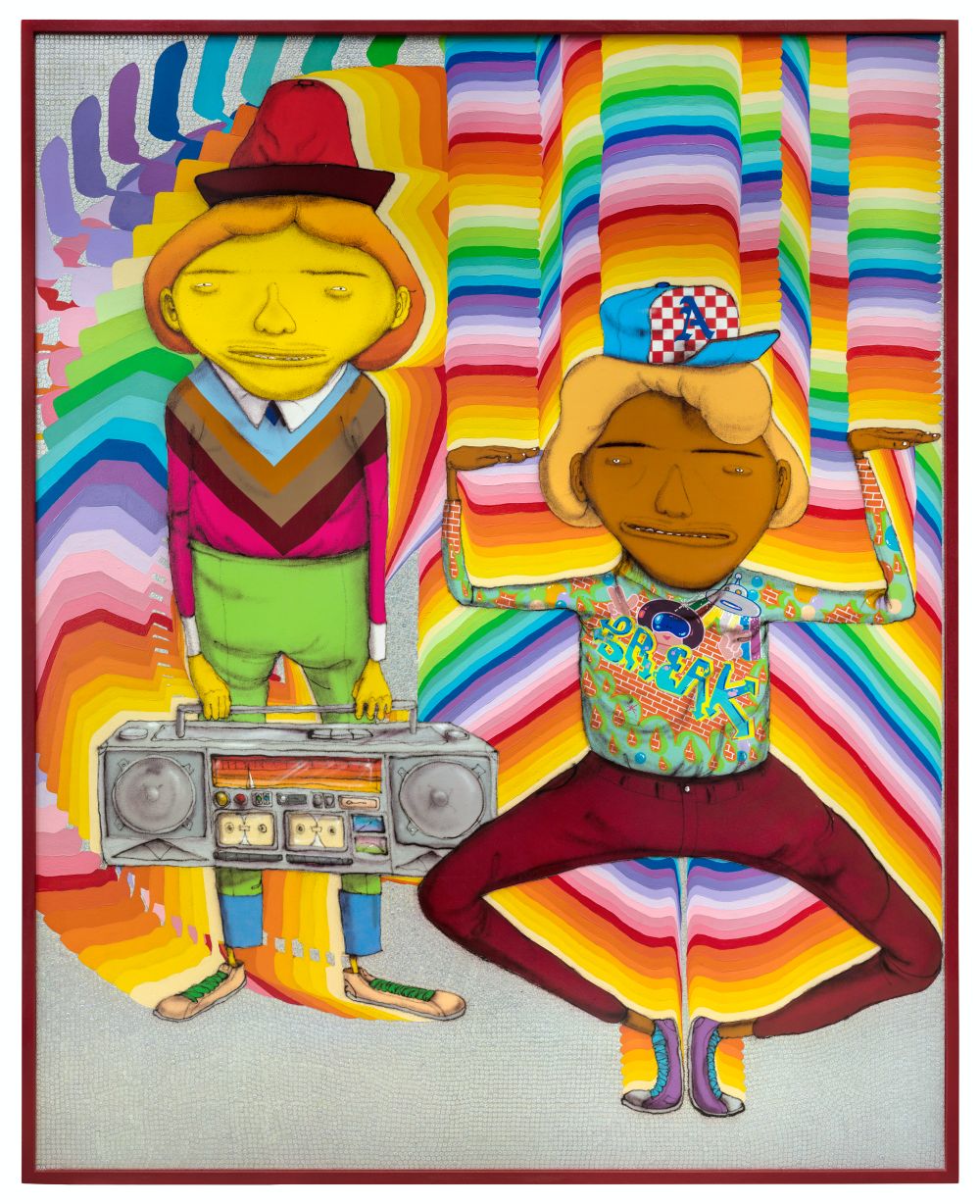 OSGEMEOS
Looking for the perfect beat, 2019 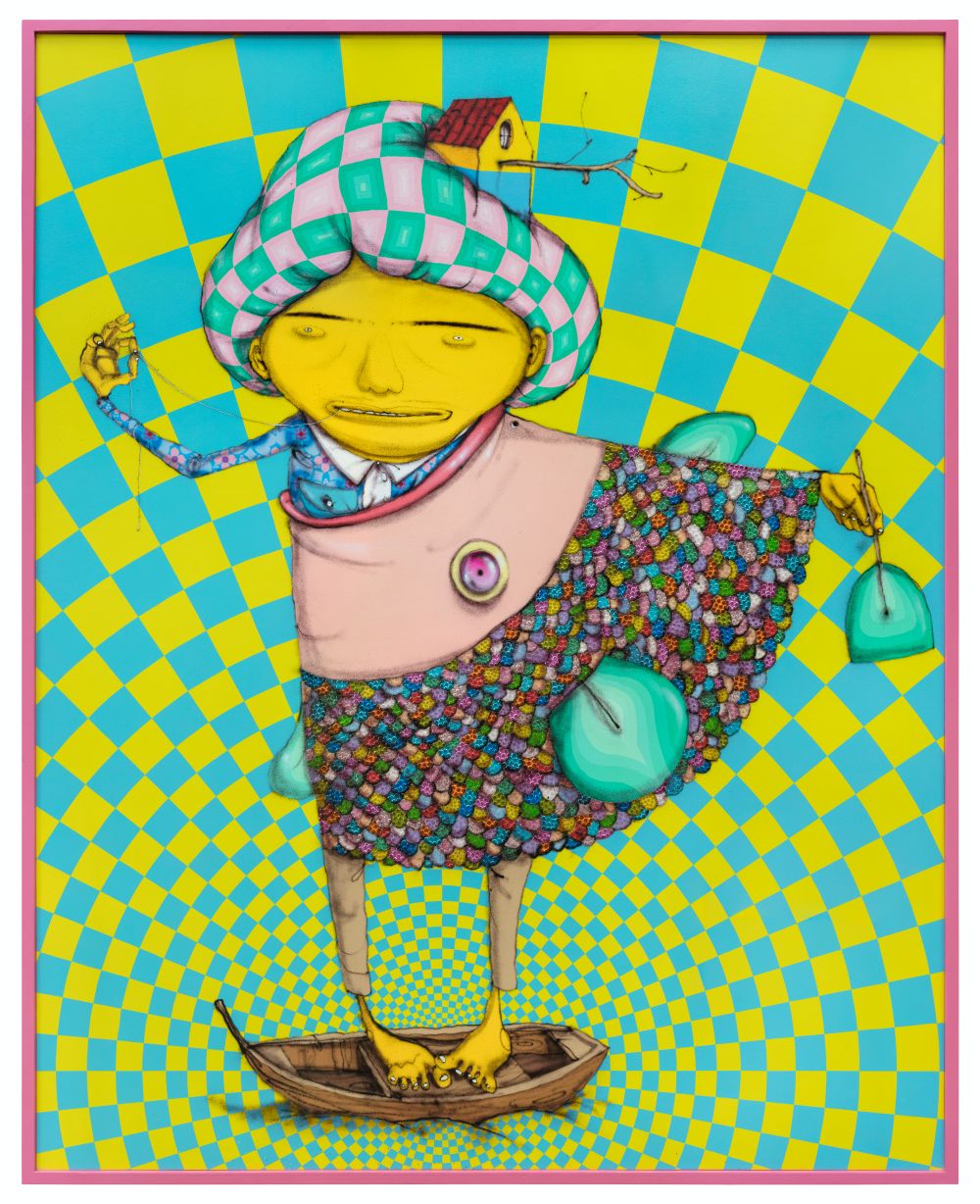 OSGEMEOS
On the lake inside the ocean, 2018 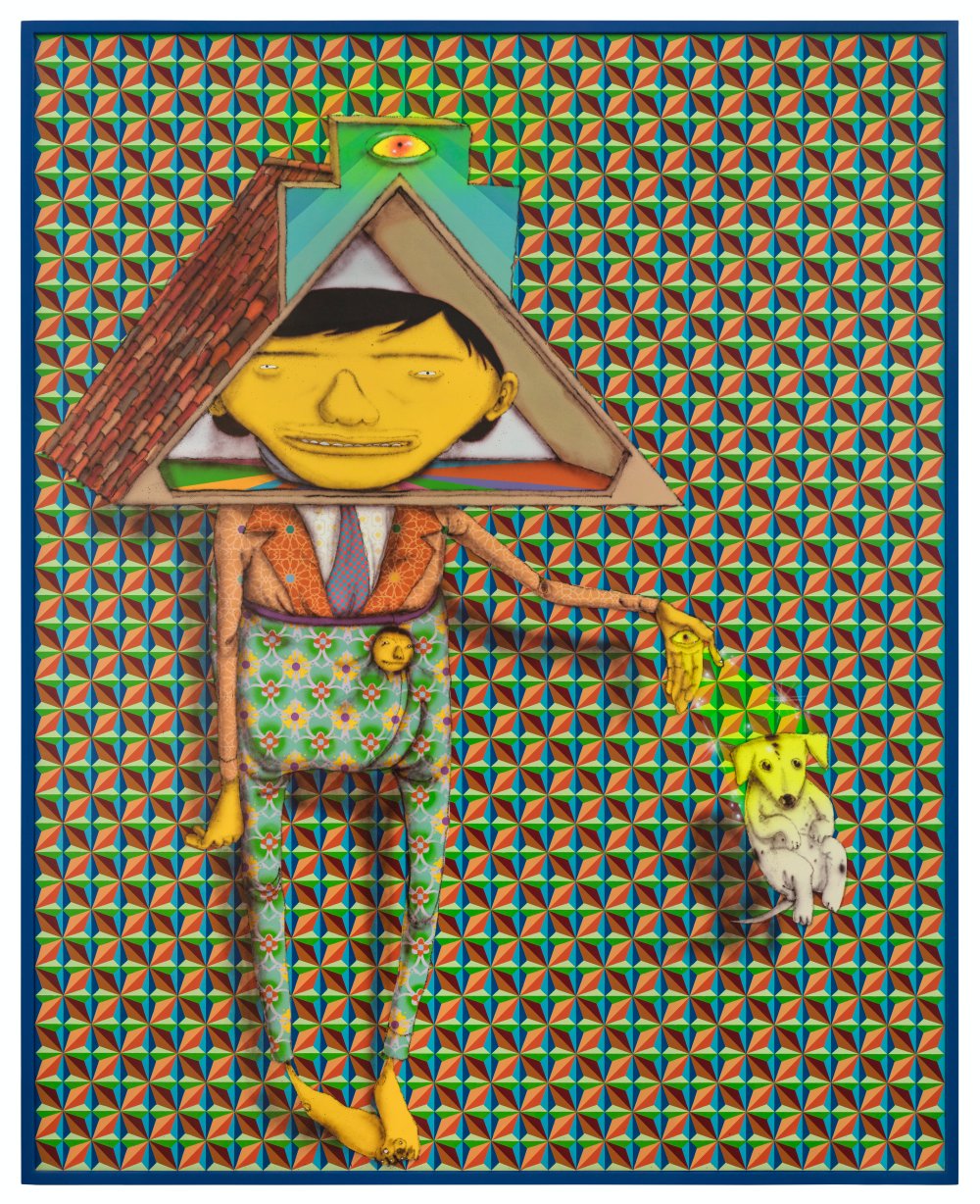 OSGEMEOS
Taking the dog for a walk, 2019 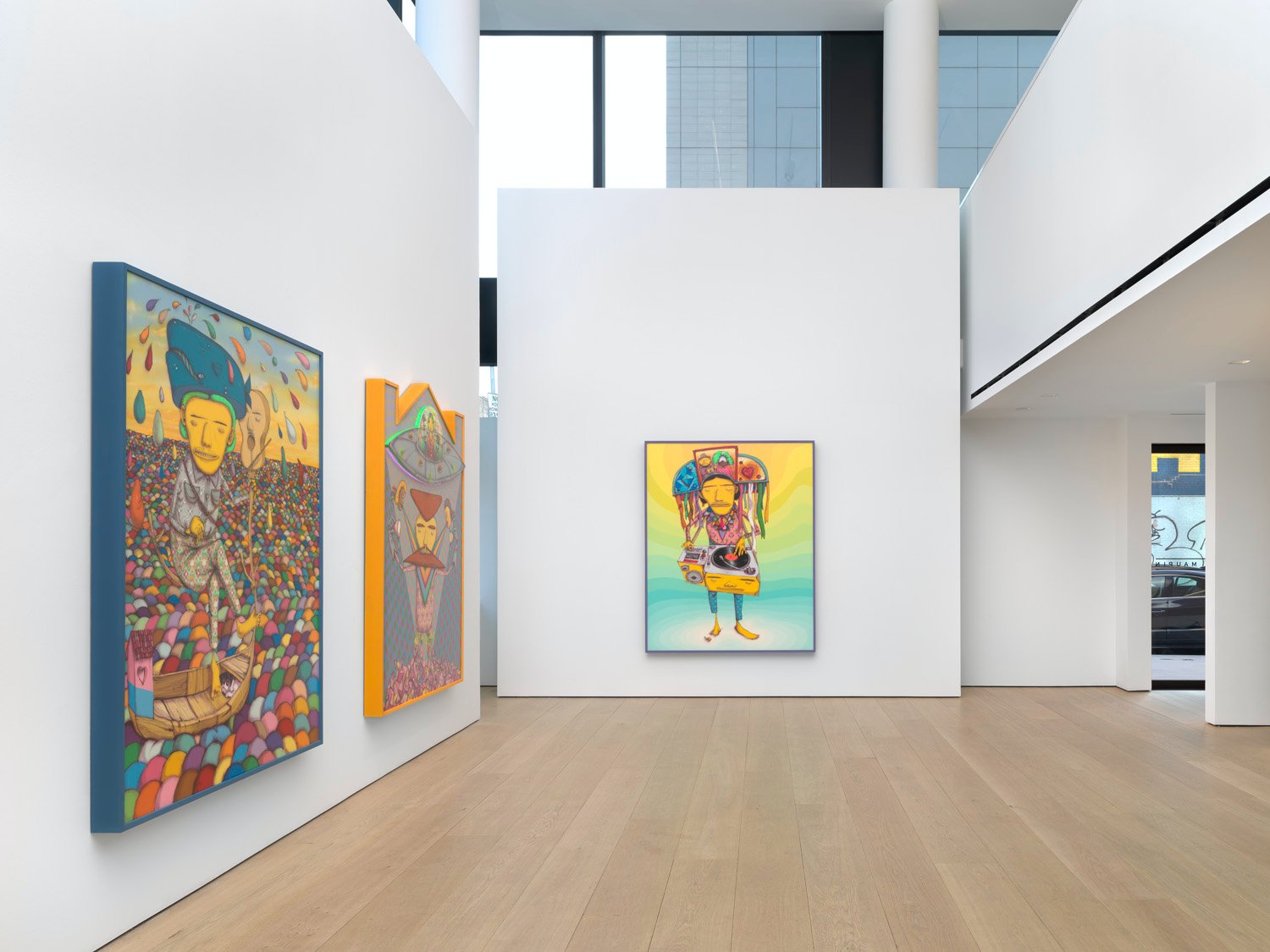 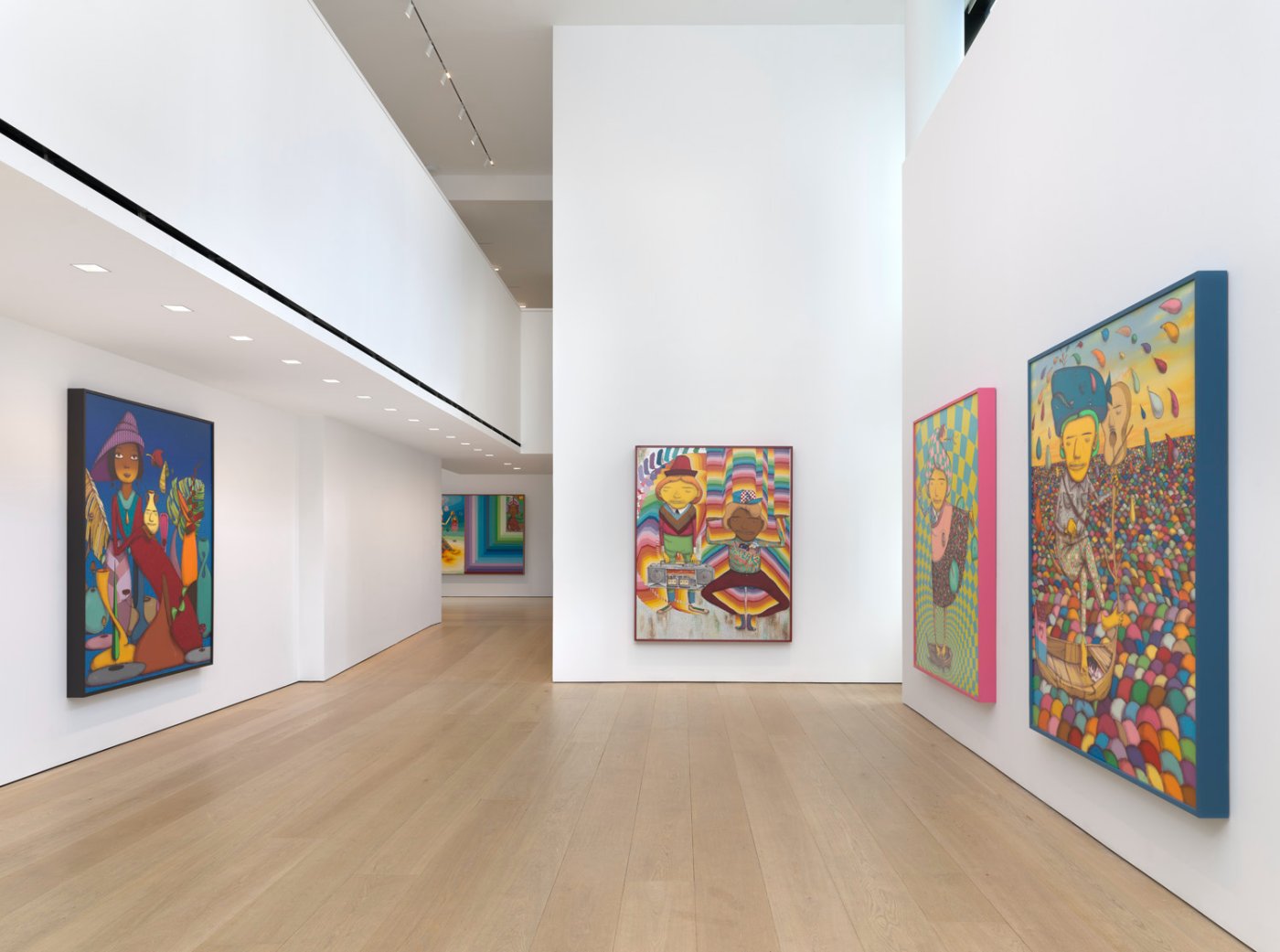 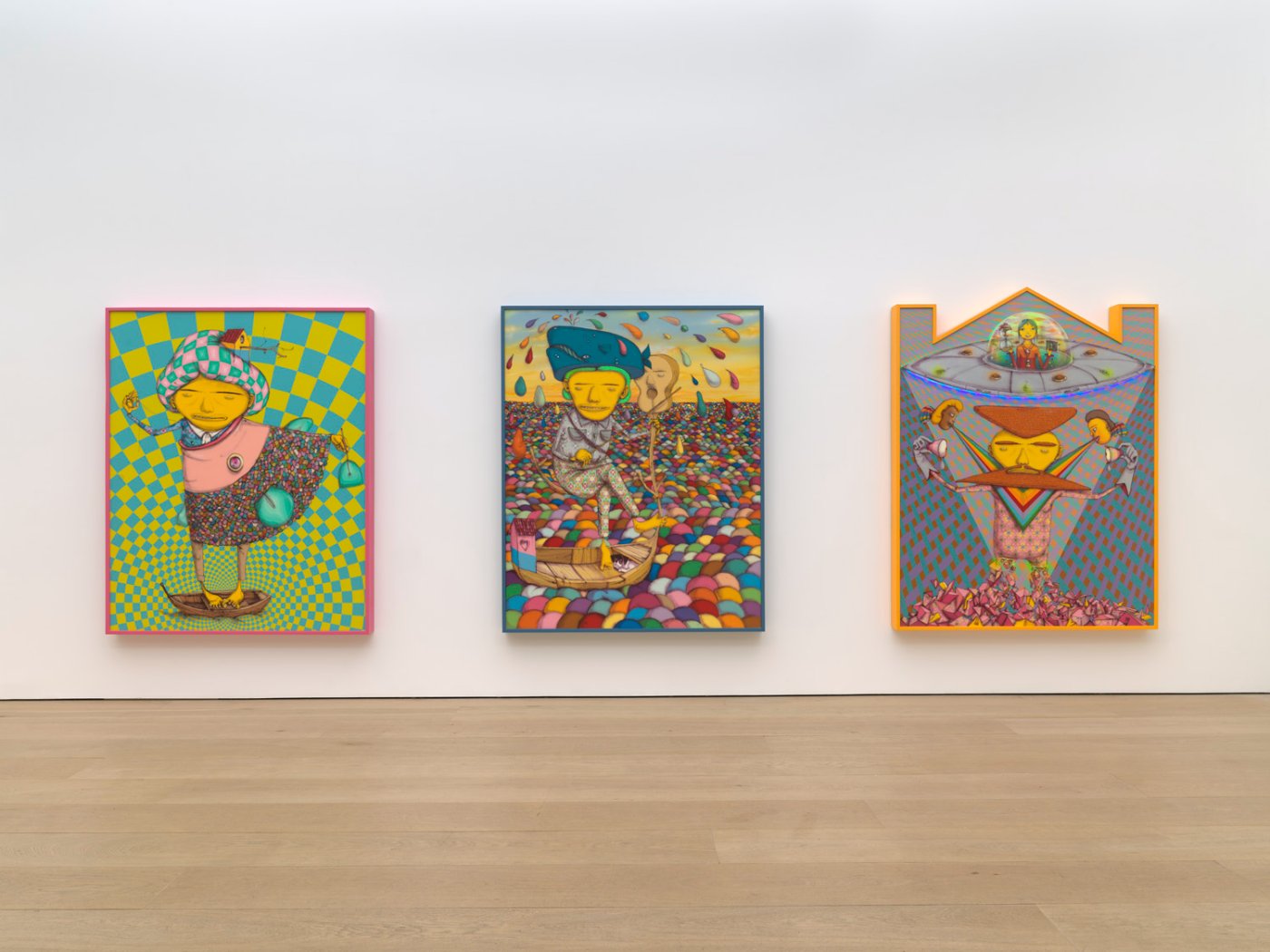 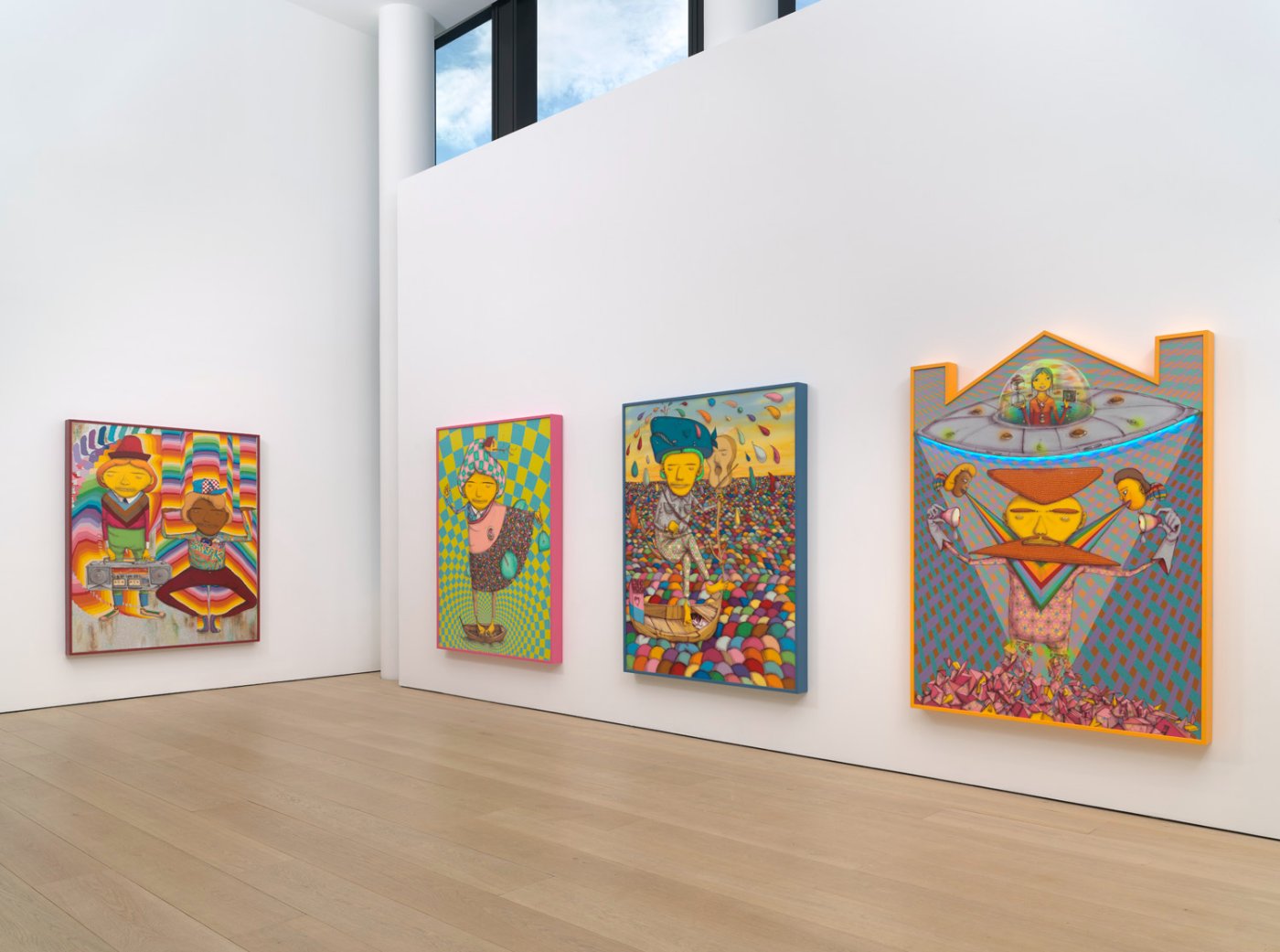 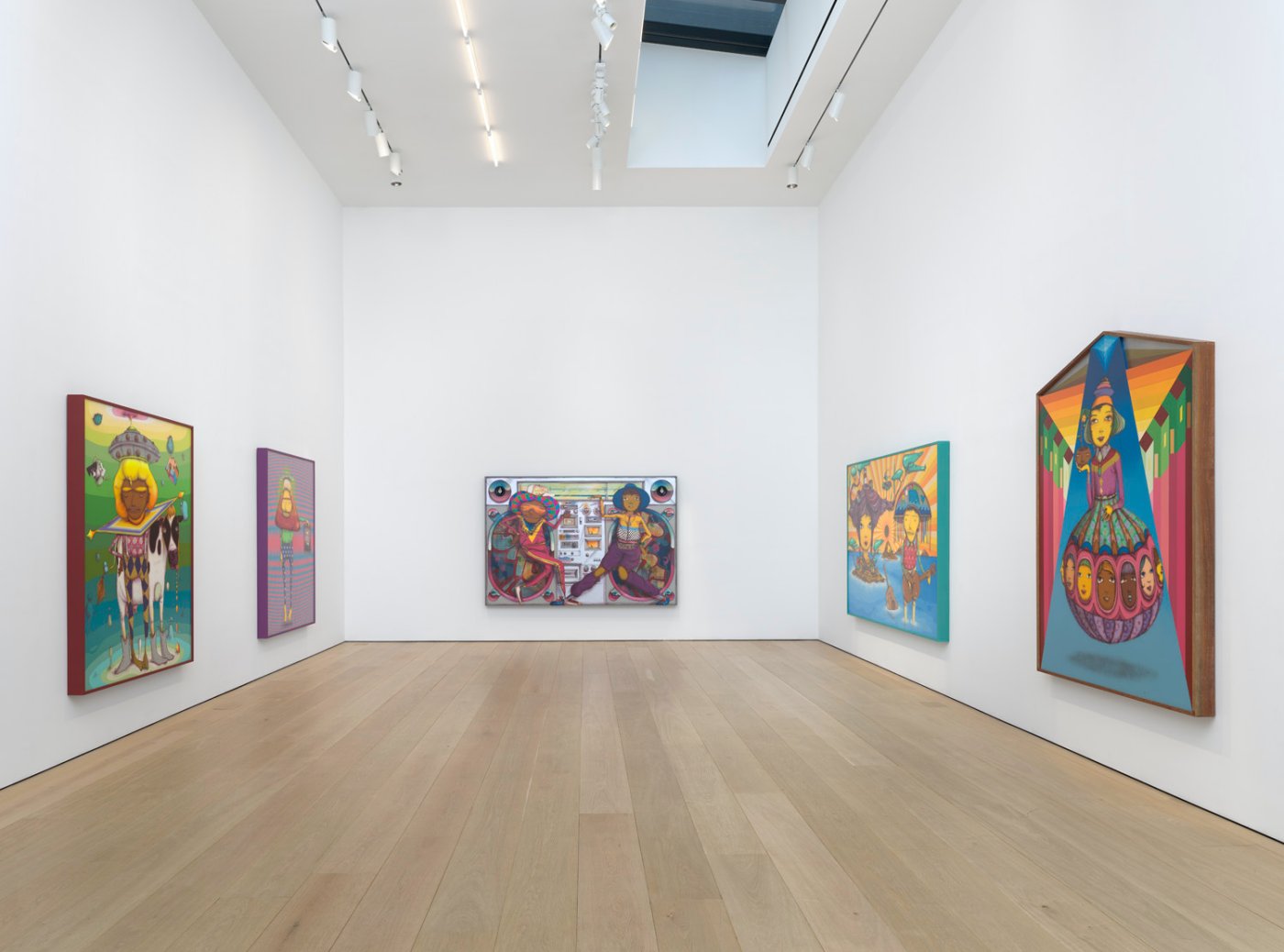 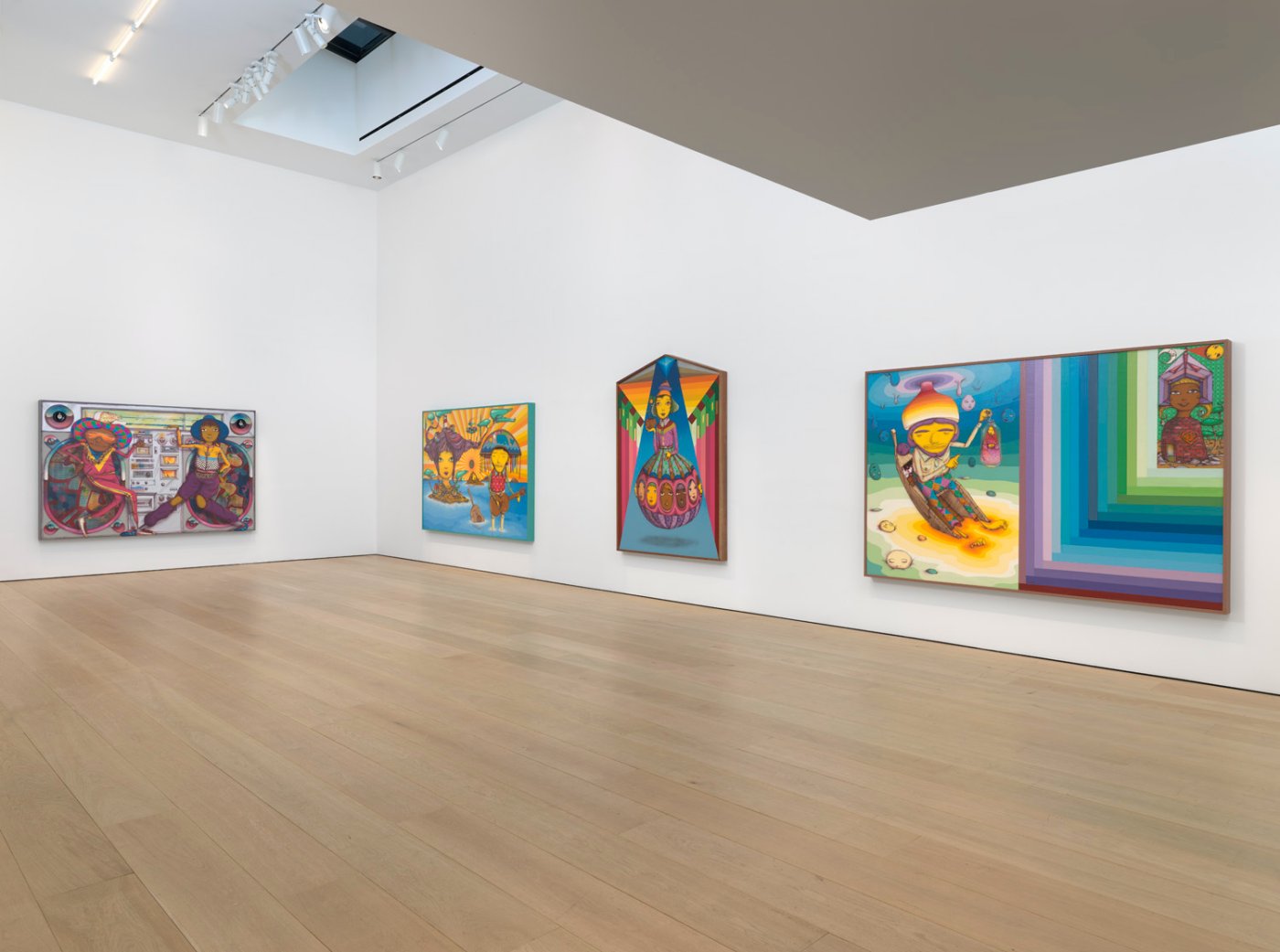 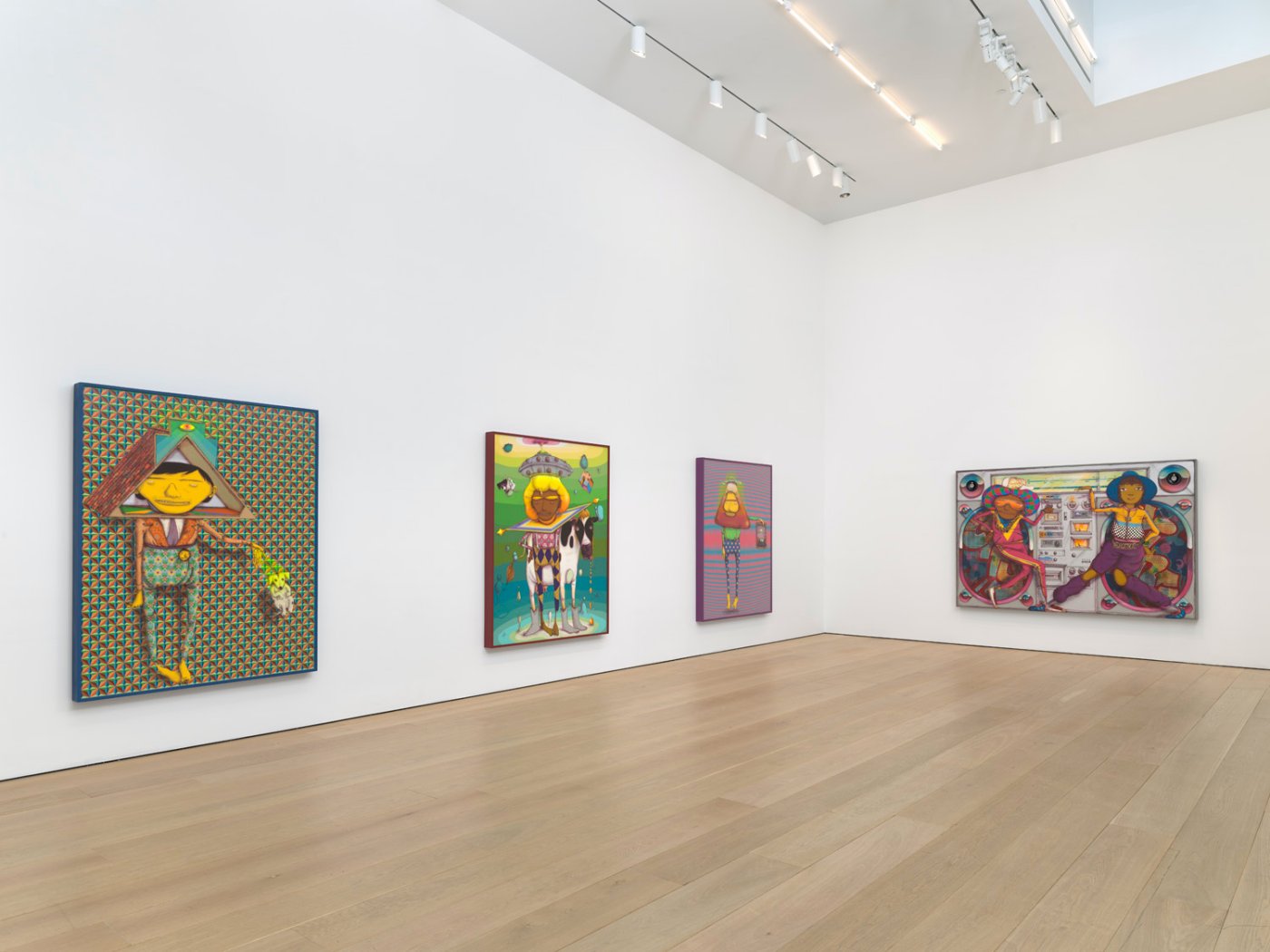 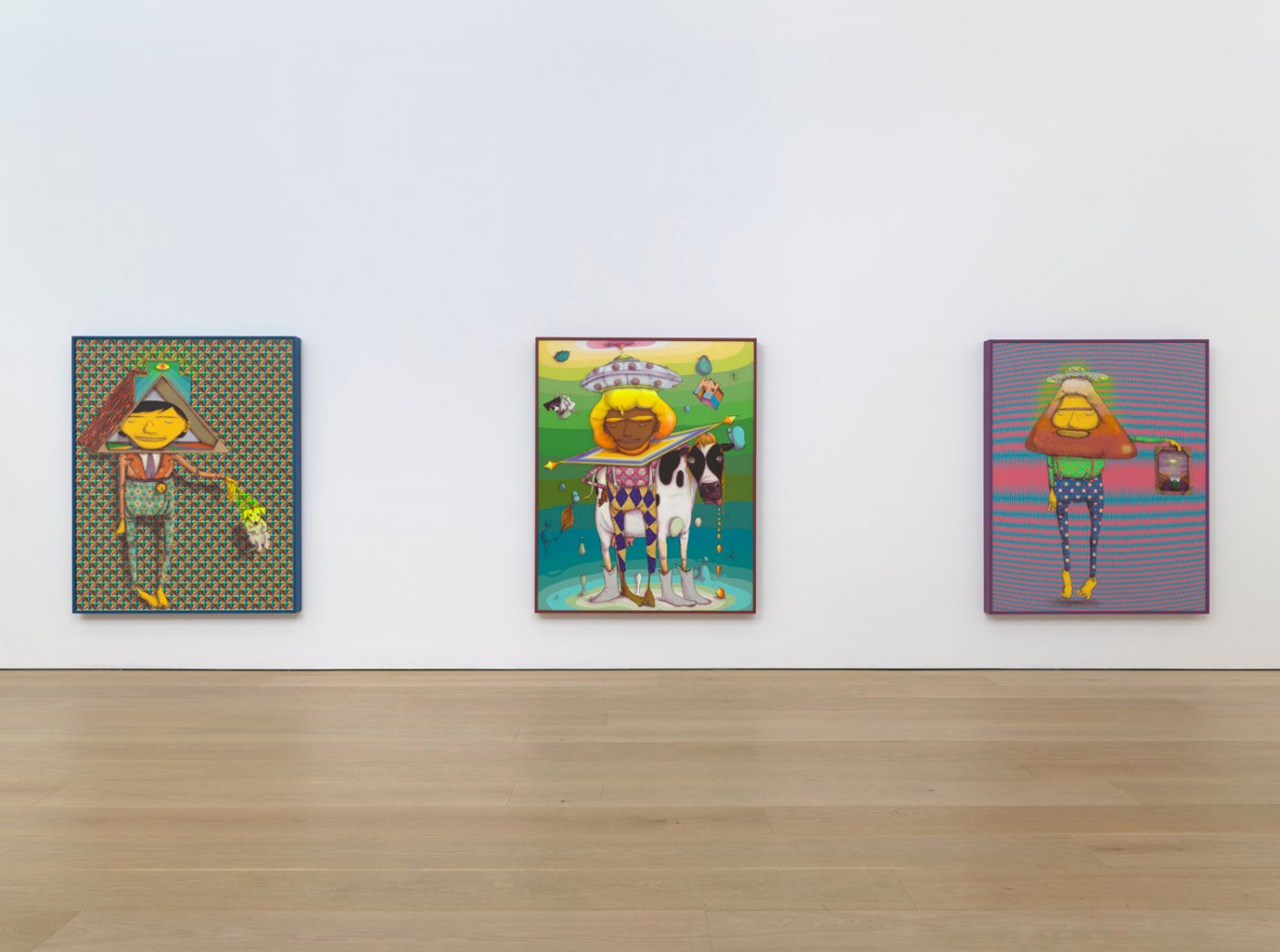 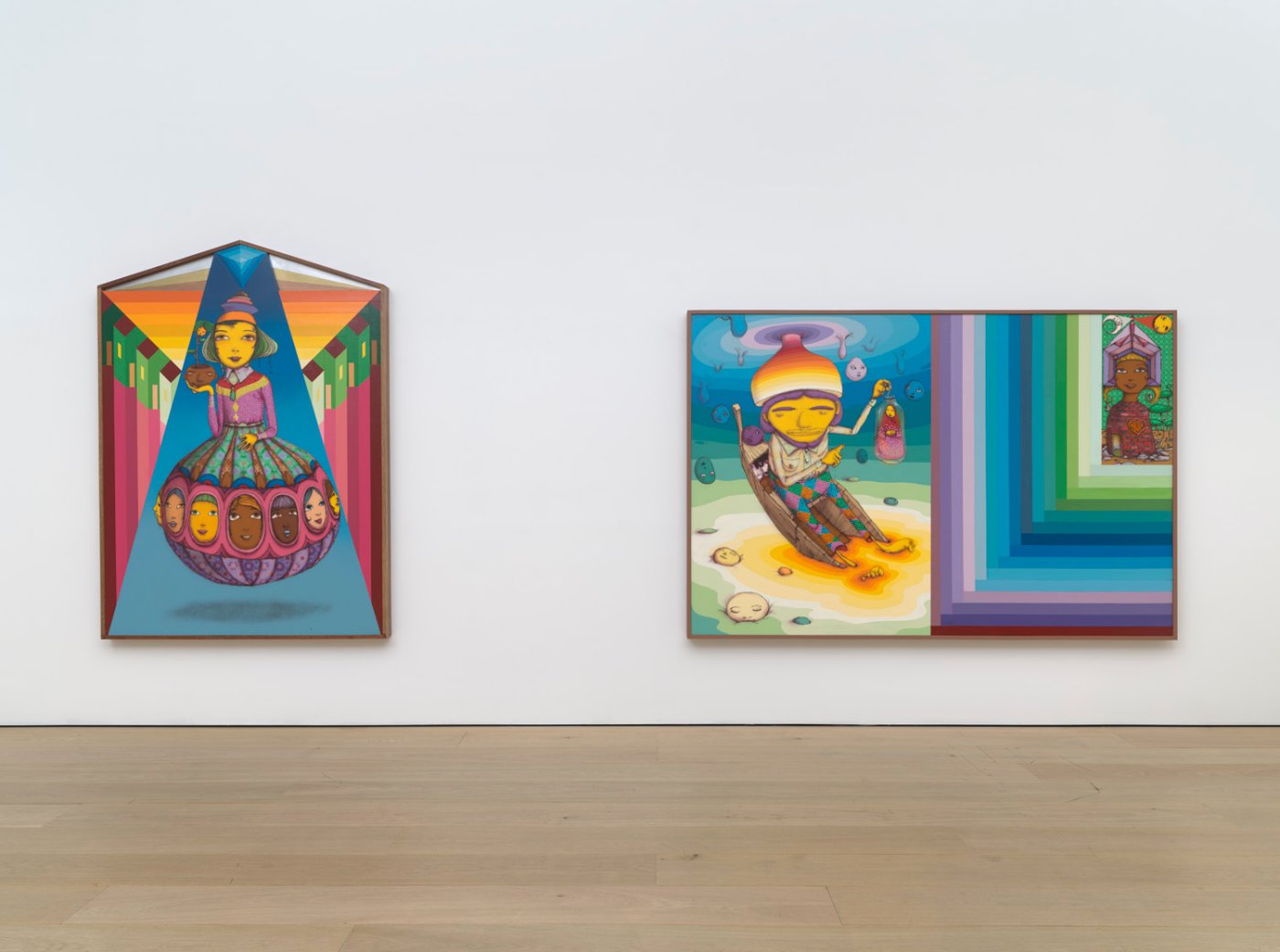 Utilizing repeated geometric motifs reminiscent of temple architecture and abstract patterns similar to those in Op Art, this exhibition offers a heightened, multi-sensory experience that embraces the power of human imagination and the vast possibilities inherent in visually interpreting the subconscious.

OSGEMEOS began their careers during the 1980s as graffiti artists, making their mark on the streets of the São Paulo neighborhood of Cambuci. They have since become internationally known for their distinct figurative style that features long-limbed yellow characters with thin outlines, enlarged faces, and simplified features, as well as their use of vibrant colors and elaborate patterns. Initially influenced by the New York graffiti and hip hop movements of the 1980s and the ingenuity and resourcefulness evident in their working class neighborhood, OSGEMEOS decided to make public work that was accessible to all. Unlike the popular Brazilian art movements at the time―conceptual, minimalist, and concrete art―that spoke primarily to the elite, engaging in public art allowed the artists to contribute a sense of optimism in their community. In 1993, following a studio visit with the prominent San Francisco-based artist Barry McGee, the twins developed a rigorous studio practice and began creating smaller paintings and objects while continuing to produce large-scale murals that could reach a wider audience. This has allowed them to navigate all facets of the artworld, from the commercial, to the institutional, to the public. OSGEMEOS’ practice continues to be marked by a commitment to the accessibility of art and to exposing the complicated realities of the working class while simultaneously celebrating its resilience.

Using a rich symbolic visual language marked by bright colors and intricate patterns, OSGEMEOS are often inspired by the vivid dreams that, as twins, they frequently share. In Taking the dog for a walk, featured in this exhibition, a solitary figure occupies the center of the picture plane, his head encased in a triangular architectural structure that bears a singular all-seeing eye, suggesting a spiritual space. The dog being “walked” floats next to this figure, and the two are connected only by a beam of light coming from the eye in the palm of his hand. In I swear that I saw that, a figure floats in the center of the picture plane surrounded by a frenzy of static line and color. His beard and hair take the form of a temple and are topped with a hat, which upon closer inspection is in fact a UFO. The figure holds a painting of a landscape, likely a view into another realm. It is left to the viewer to determine whether the figure or the landscape occupy reality―or if neither do. Both works exemplify the artists’ aptitude for merging symbols, genres, and techniques in order to create visual narratives that are open to an endless number of interpretations.

The work of OSGEMEOS can be seen as a form of contemporary surrealism, as the artists seek to defy both artistic and societal conventions through the exploration of the subconscious and imagination. Their extensive symbolism extends to their characters as well, with their yellow tone meant to defy racial associations, emphasizing unity and the establishing role that diversity plays in the artists’ native Brazil and beyond. The pretty island pictures a male figure ankle deep in water playing a guitar and two female figures who are both woman and island. The body and hair of the woman closest to the viewer has been transformed into surreal landscapes, while the female figure in the back appears to be slowly emerging from her island form. This work illustrates OSGEMEOS’ innate ability to create multiple worlds within a single composition. Here the hat worn by the male figure features a similar but perhaps more realistic depiction of a seascape, while the female figure in the foreground is home to multiple towns and plant life, including a tiny city that populates one of the many trees growing from her purple hair. These worlds inside of worlds are also frequently portrayed through the use of doors and mirrors that signal access to another realm or an entry point to the psyche, pulling viewers into the artists’ surreal and chimerical world. The works featured in Portal exemplify OSGEMEOS’ approach to an exhibition as a total work of art. Each space within the gallery is transformed into a multi-layered experience meant to conjure a lucid dream state and invite the audience to acknowledge the depths of their own subconscious.