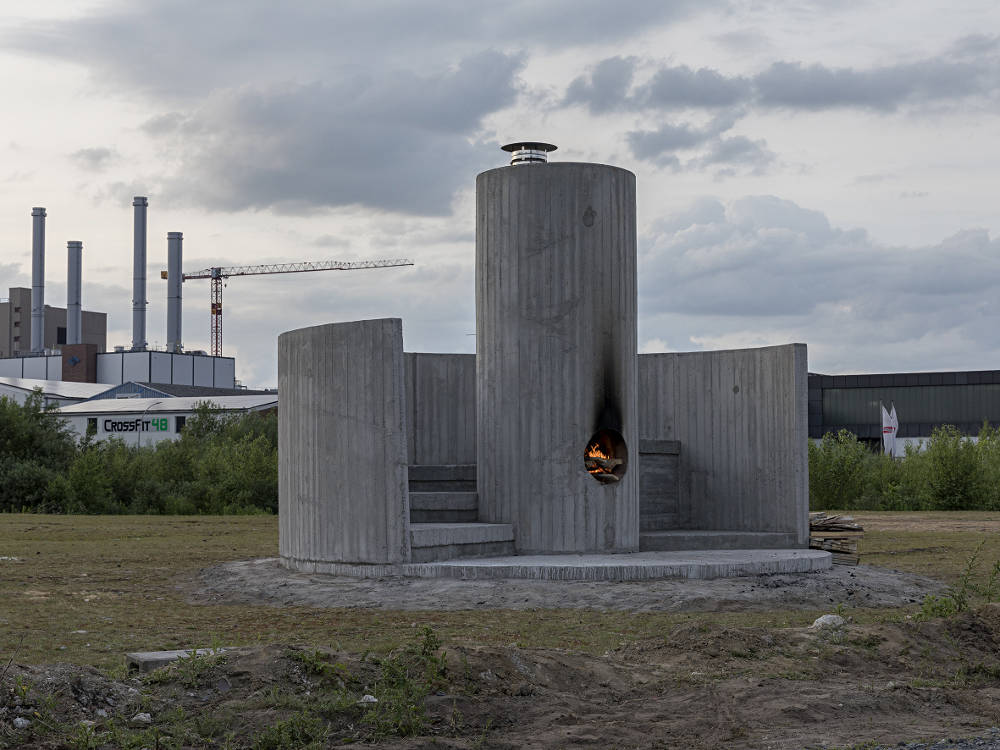 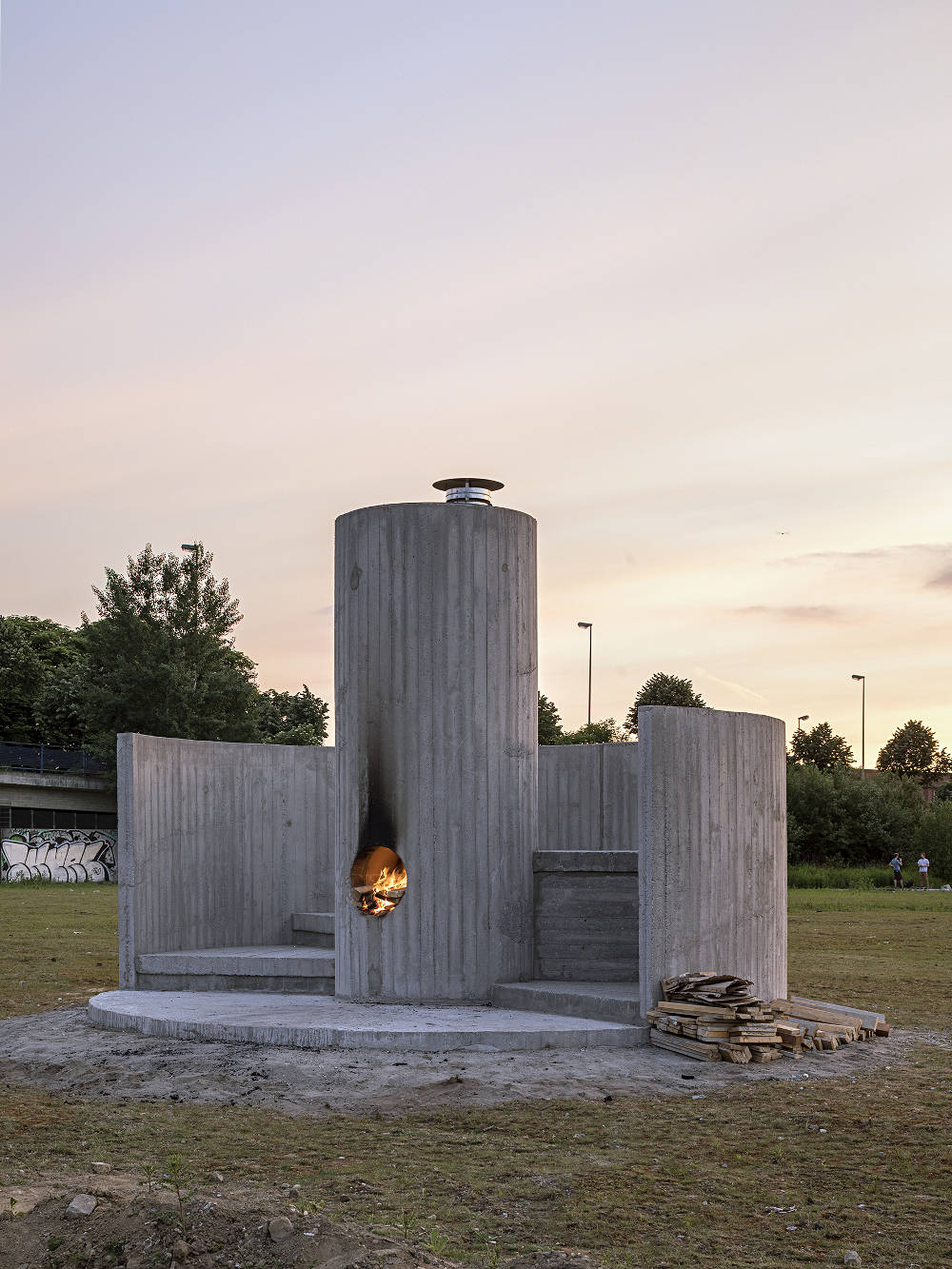 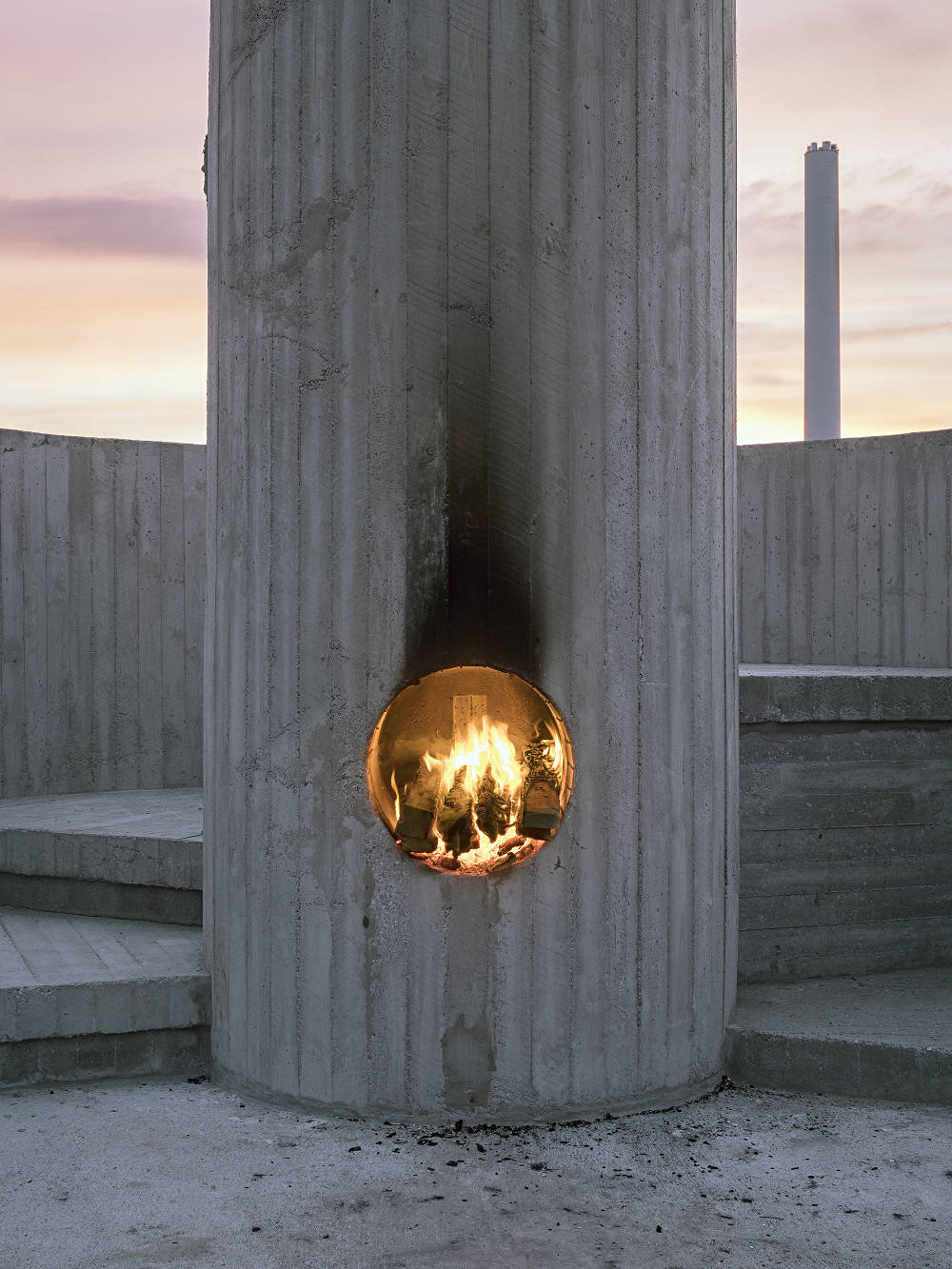 Oscar Tuazon’s (* 1975 Seattle, lives in Los Angeles) sculptural works have overlaps with architecture and evolve through their encounter with the exhibition’s context. His constructions of wood, concrete, or steel are characterized by a rough materiality: one can see traces of the manufacturing process and visible signs of material fatigue. His artwork refers back to the vocabulary of minimalism, but it confronts the sterile aesthetics of this style with an action-based concept of sculpture made tangible by the artist’s statement, ‘I think with my hands.’

In Münster, Tuazon has installed an object made of concrete in an industrial wasteland along a canal—an undefined plot of land which is used by various groups of people. The object serves as a public fireplace. The cylindrically shaped sculpture can be used for barbecuing, warming up, and as a look-out. The work’s focal point is the chimney-like pillar with its two integrated fireplaces—its reduced form is the consequence of its function. A spiral stairway with large steps rises around the hearth, encircling two-thirds of it. In turn, the stairway is bounded by a lateral wall. The vitiated air from the separate fireplaces is conveyed to the chimney through a system of pipes beneath the stairway. The small sections of wooden boarding that were used in the construction can be removed and burned as well.

This object represents a continuation of Tuazon’s work with temporary exterior structures such as his contribution to the 2011 Biennale in Venice or his permanent installation at Brooklyn Bridge Park. The focus in both of these concrete pavilions is on their function as rudimentary shelters and meeting places. In Münster, however, the form is recast by the active use to which the work is put. Just as physical experience plays a key role for Tuazon in the production process, his contribution to Skulptur Projekte with its accessible dynamics is intended for immediate reception as a utilitarian object with a close relationship to everyday life: in contrast to the artistic practice of relational aesthetics, the art crowd is not the main recipient to whom the work is addressed. This heat-radiating sculpture, which is almost unthinkable as an official architectural structure within a regulated urban space, has a social dimension. It connotes a form of participation that eludes regulation, like the situation in an area of no-man’s land, and thus also has an inherent potential for friction. Using the archaic motif of the fireplace, it points to a communal activity. It also has a sculptural resonance with the basic home-made architecture associated with the counterculture and dropping out and characterized by pragmatic improvisation. Left to itself, the work—which emanates an element of ruinous entropy as an unwrought object in the peripheral terrain—develops a life of its own.