David Zwirner presents new work by Oscar Murillo at the gallery’s London location. Three new series of paintings, including his most recent body of work manifestation, are on view for the first time. 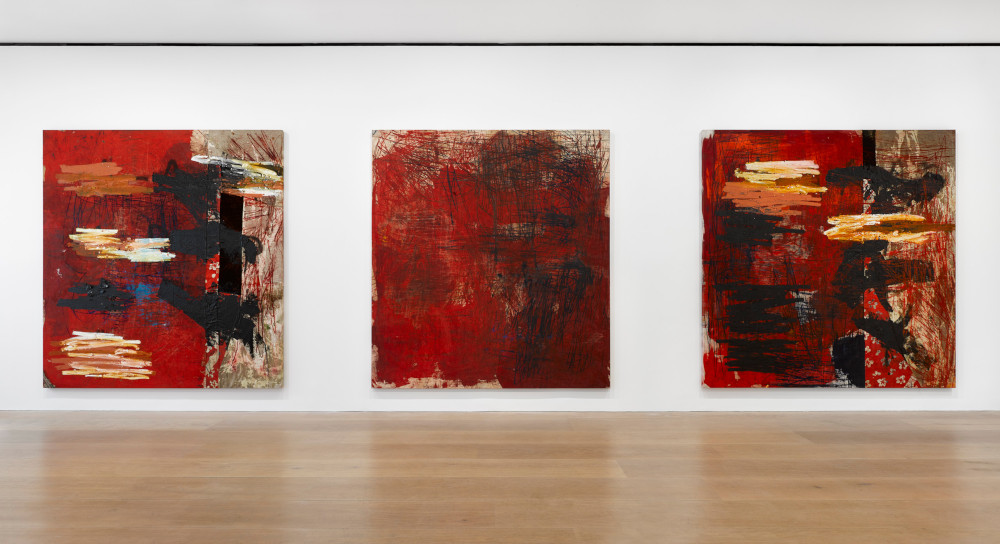 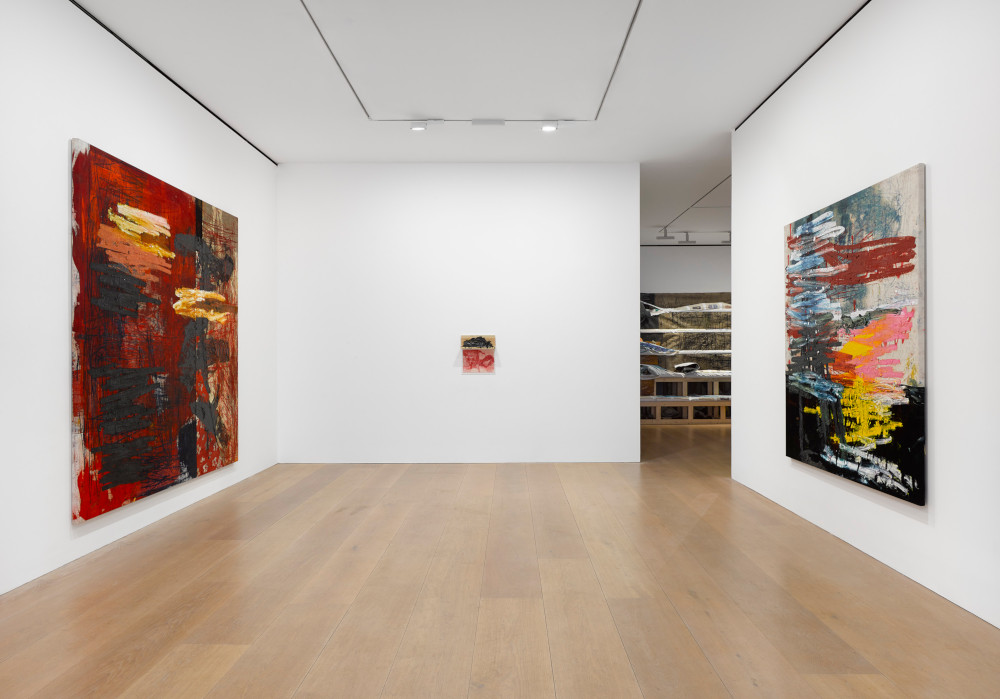 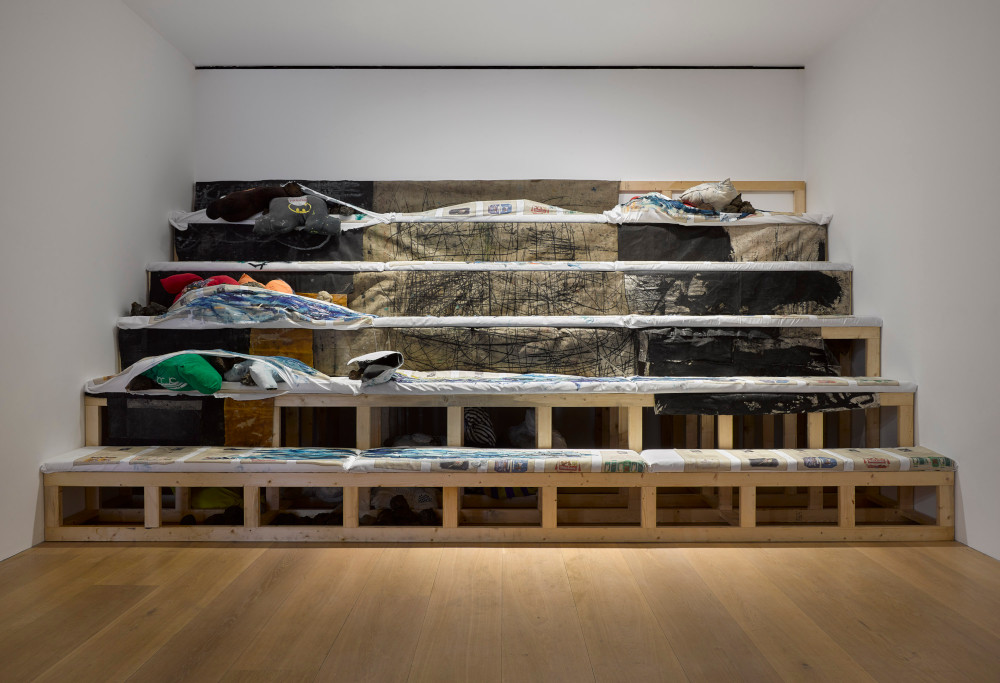 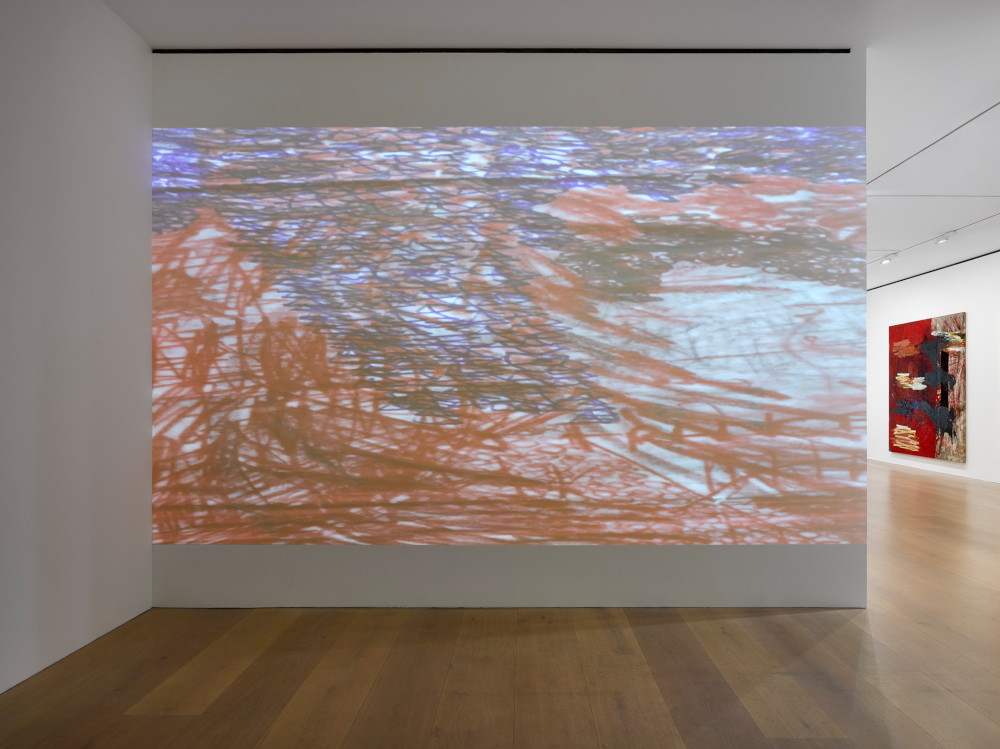 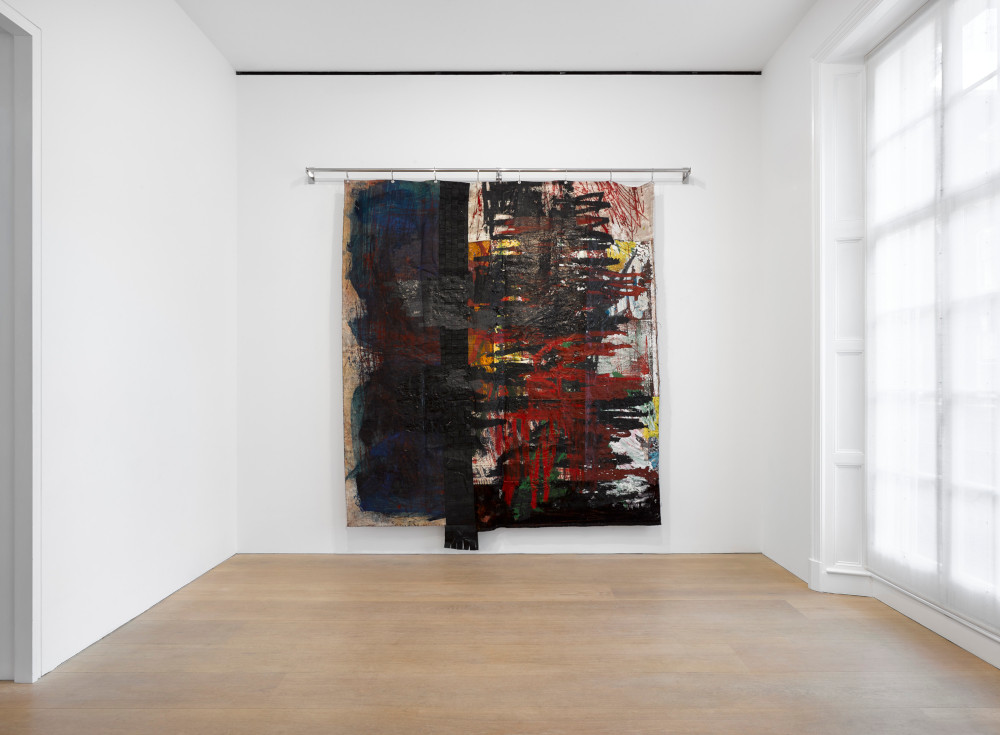 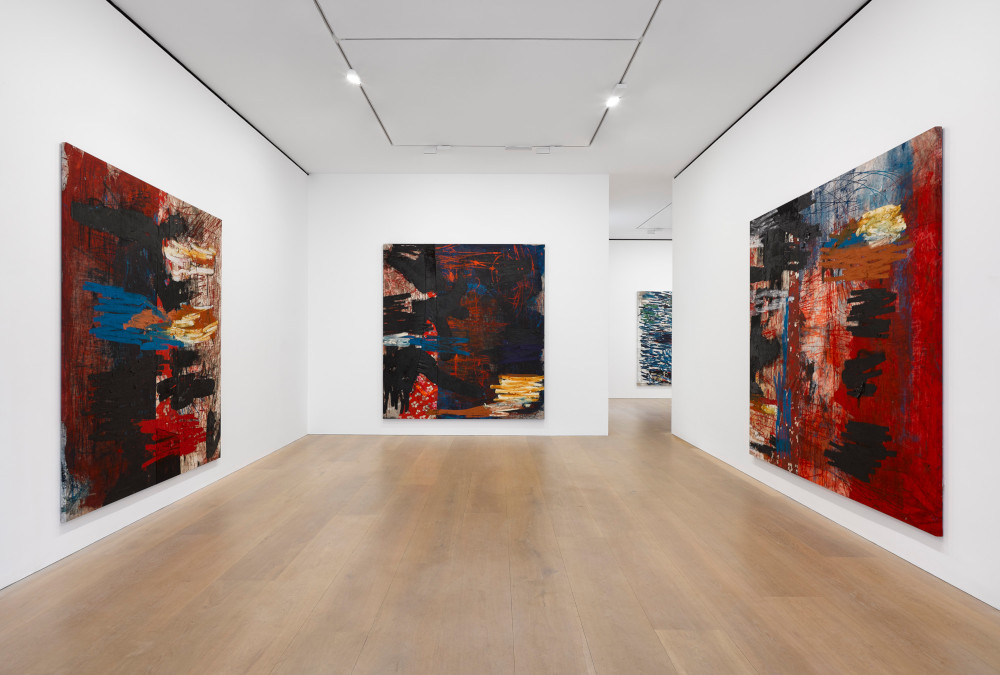 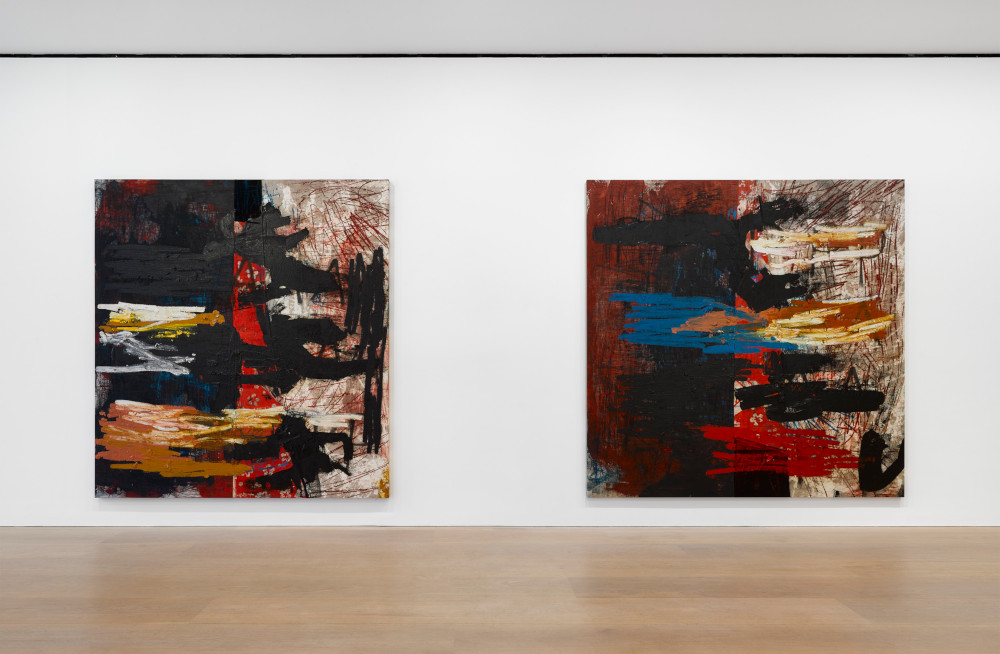 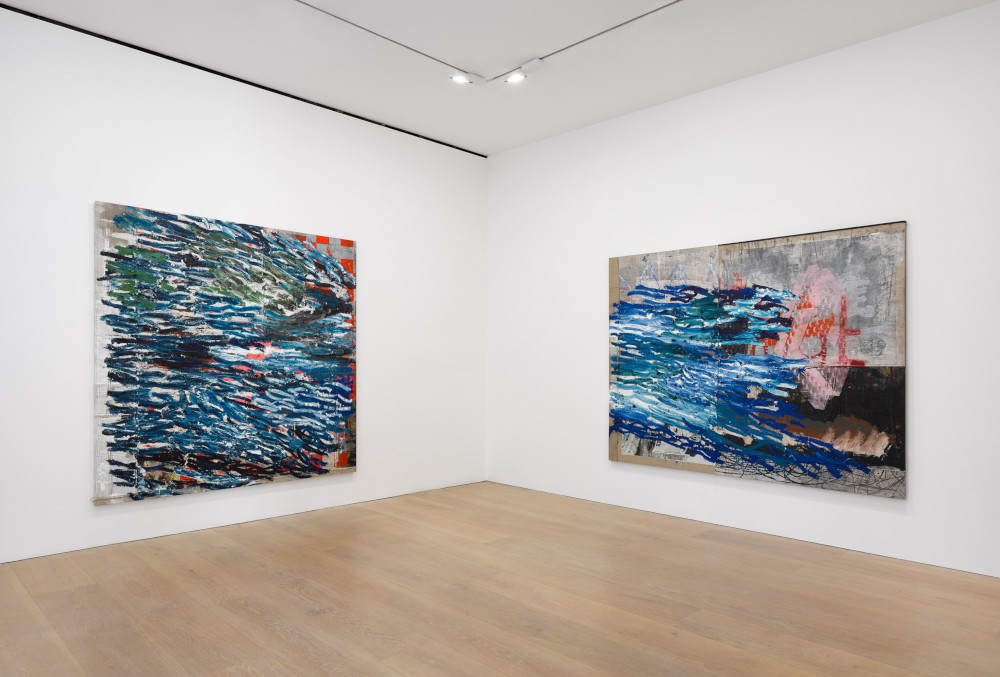 Collectively signalling a shift in his studio practice, these works explore a considered approach to mark making. Viewed together, the paintings will highlight the artist’s expansive studio practice and the multiple ways in which he engages with the act of painting. Also on view will be a new installation building on Murillo’s sustained interest in travel and questions around labour and the geographical flow of humanity.

Born in Colombia and based in various locations, Murillo is known for an inventive and itinerant practice that encompasses paintings, works on paper, sculptures, installations, actions, live events, collaborative projects, and videos. Taken as a whole, his body of work demonstrates a sustained emphasis on the notion of cultural exchange and the multiple ways in which ideas, languages, and even everyday items are displaced, circulated, and increasingly intermingled. Murillo’s work conveys a nuanced understanding of the specific conditions of globalisation and its attendant state of flux.

Murillo’s manifestation paintings, in particular, represent a marked evolution in the artist’s engagement with process, containing within them a history of his studio practice. The works build on the technique developed by the artist in his catalyst series, which he began in 2011. The catalystworks are created by saturating a skein of canvas with pigment, laying a second canvas on top and using a stick or broom handle to transfer marks from one to the other, in an explosively energetic, full-body mark-making process. In the manifestationworks, Murillo takes this a step further, repurposing fragments of earlier catalystworks, along with fields of the deeply saturated ‘ink-pad’ canvases. As with many of Murillo’s works, different pieces are sewn together and painted onto to create a collaged effect, consciously juxtaposing the different energies of painted planes. Characterised by dense, aggressive bursts of colour—most frequently black—the works represent a play between gesture and signification. In each canvas, repeated letters are painted and then eradicated, almost without visible trace. The title manifestation plays with the notion of signification and the creation of meaning. The word additionally holds a political meaning, being the most common term to describe a political protest in several languages. Thus, the idea of physical presence or gesture also points to the act of using one’s body to demonstrate dissent in the face of power.

In his news paintings, Murillo embeds into the composition a range of signifiers, some of which remain legible and others of which are totally obscured. Through an associative working method, the artist builds up layers of both found and invented imagery and phrases as well as gestural markings in intuitively placed planes, resulting in dense, visually layered surfaces. As the final step in the process, he covers the canvas in colourful swaths of paint. Resolutely gestural, these instinctive markings nevertheless reveal an intentionality in their horizontal thrust and their placement. With these new works, the artist has begun to take a more premeditated approach, mimicking the way in which information is often received in today’s world. Concerned with both erasure and retention, Murillo implicitly suggests that there are additional details beneath the surface that, although invisible, nevertheless have bearing on meaning.

Similarly, in his surge paintings, Murillo partially covers the topmost layer of the canvas in a rush of undulating blues, conveying a sense of motion and defined depth across the surface of the work through the repetitive gesture used to create it. Referencing both the surge of energy used to make the works, as well as the ability of water to flow indiscriminately without regard to arbitrary constructs such as maps or borders, Murillo simultaneously conjures a utopic and cautionary vision of contemporary geopolitics.

Presented in an adjacent gallery is a new installation that builds on a group of previous works, such as collective conscience, which was included in Murillo’s recent two-person exhibition at chi K11 art museum, Shanghai.

Oscar Murillo(b. 1986) earned his BFA in 2007 from the University of Westminster, London, followed by his MFA in 2012 from the Royal College of Art, London. Murillo’s works and projects have been the subject of one- and two-person exhibitions at prominent institutions worldwide, most recently at chi K11 art museum, Shanghai (2019); Haus der Kunst, Munich (2017); CAPC musée d’art contemporain de Bordeaux (2017); and Jeu de Paume, Paris (2017). Murillo’s work was also featured in the 2018 Berlin Biennale, We don’t need another hero.

Murillo’s work will concurrently be on view in a solo presentation at Kettle’s Yard, Cambridge, in England (through 23 June 2019) and in a two-person show with Tony Cokes at The Shed, New York (19 June through 25 August 2019). Murillo is nominated for the Turner Prize 2019, and his work will be presented alongside the other nominees at Turner Contemporary in Margate, England, from 28 September 2019 to 12 January 2020.

Murillo has been represented by David Zwirner since 2013. This is his fifth solo exhibition with the gallery. To coincide with this exhibition, Oscar Murillo: Poetry in Flight will be presented in the Online Viewing Room, launching mid-June 2019 at davidzwirner.com/viewing-room. Exclusively available online, the collection will feature new works on paper by the artist inspired by travel, transience, and motion.