Richard Saltoun Gallery presents Organised Killing, a landmark exhibition retracing the history of modern conflict from 1914 to the present-day war in Ukraine through the personal accounts of 13 international artists. 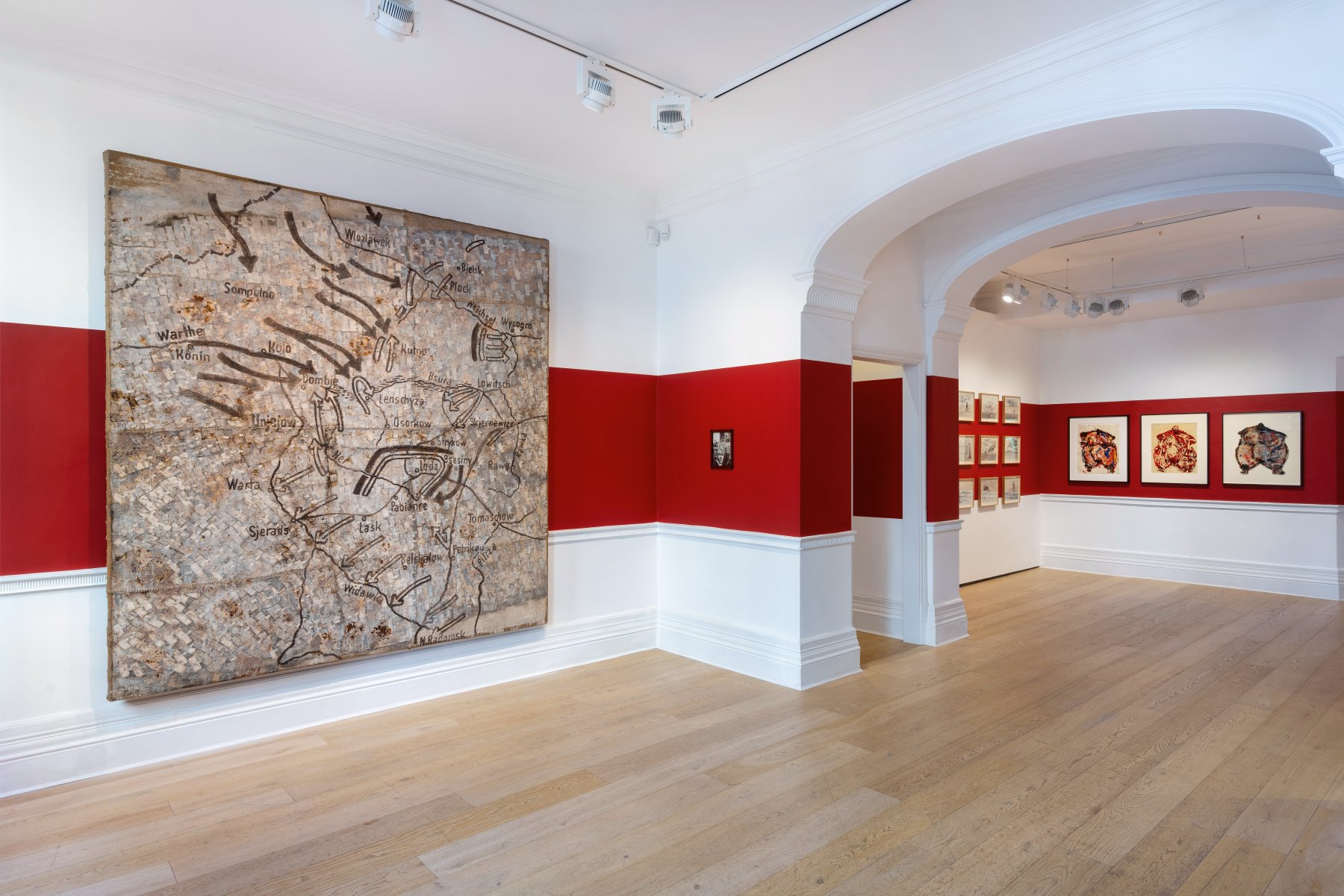 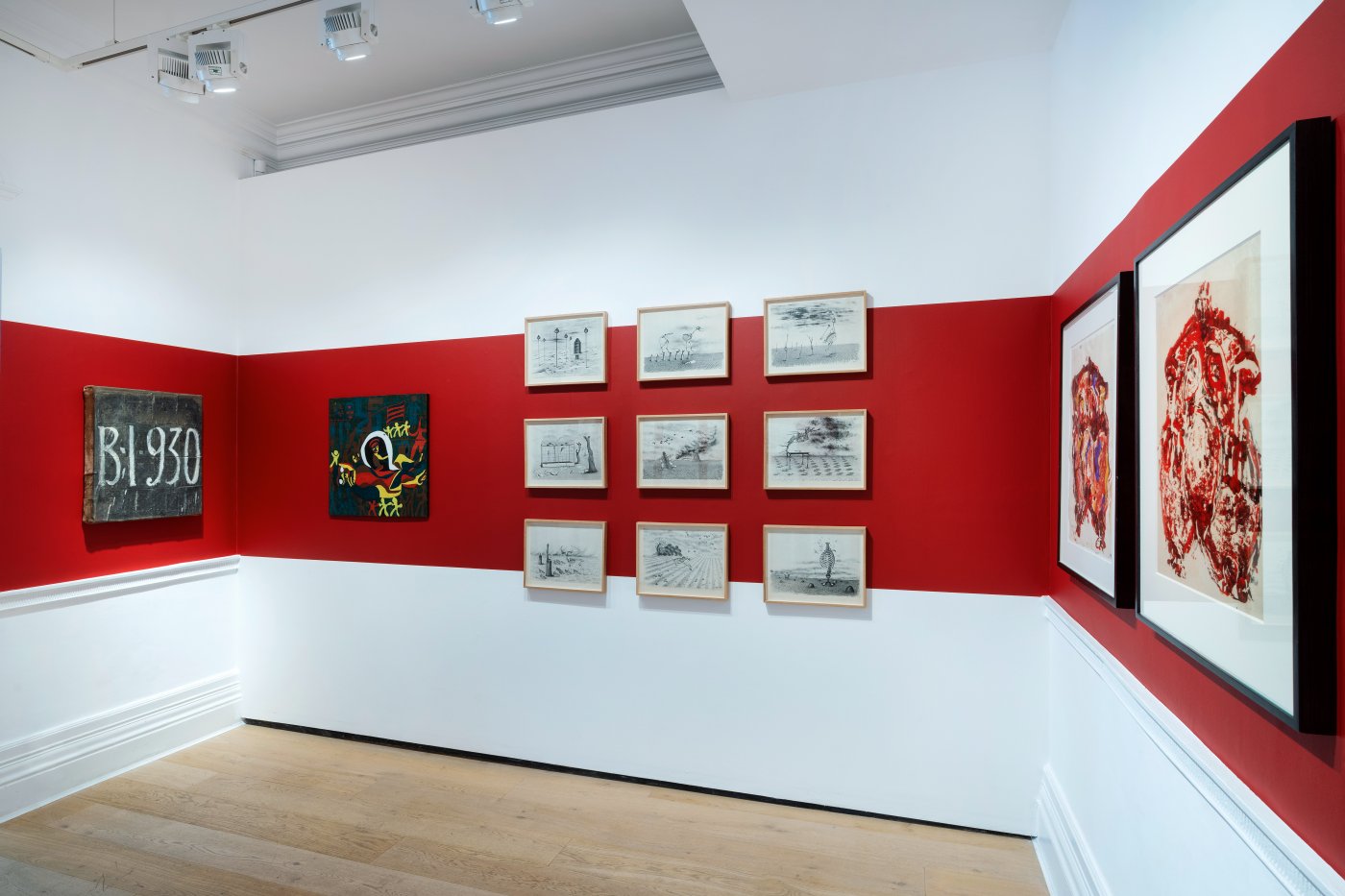 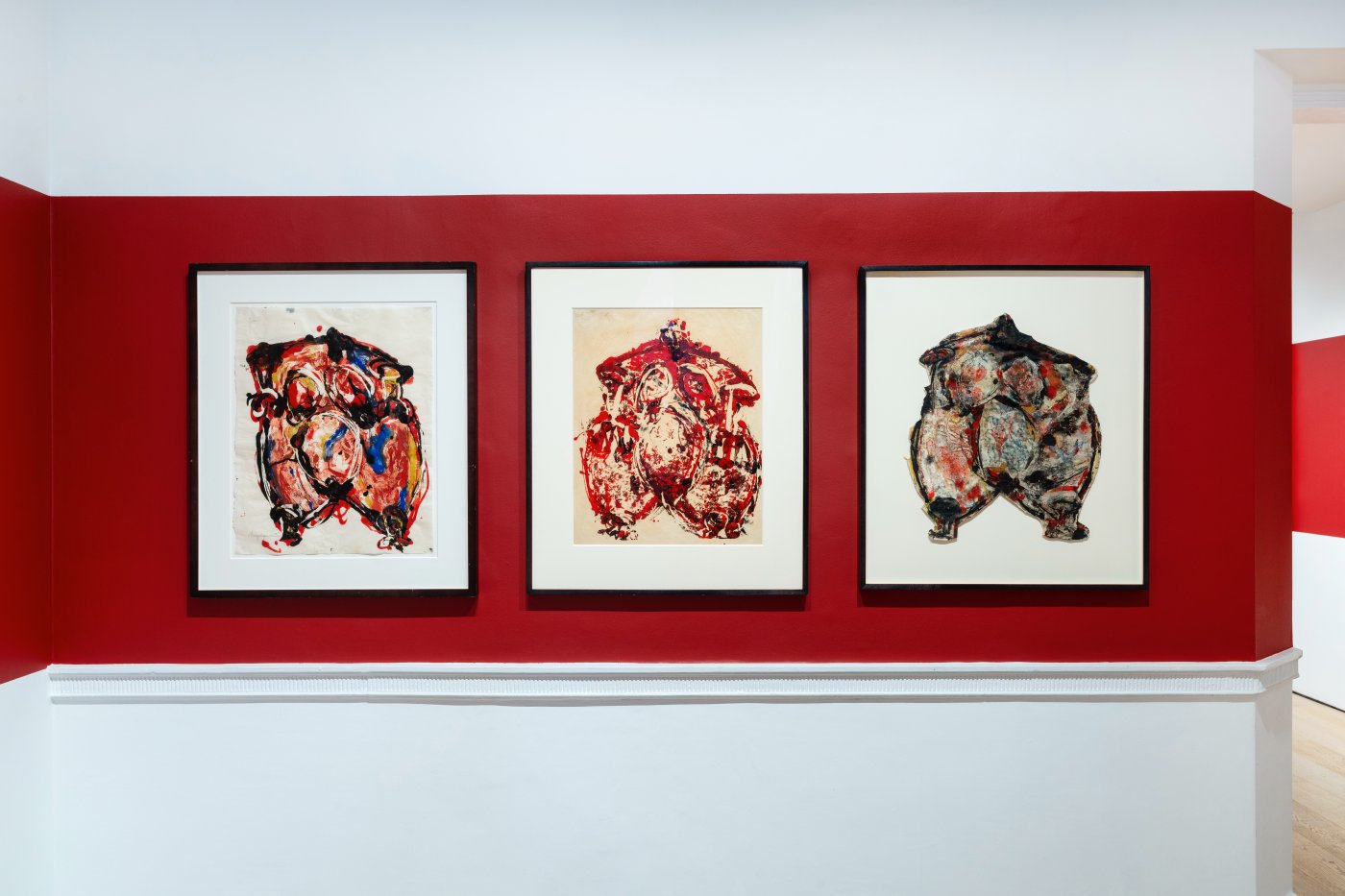 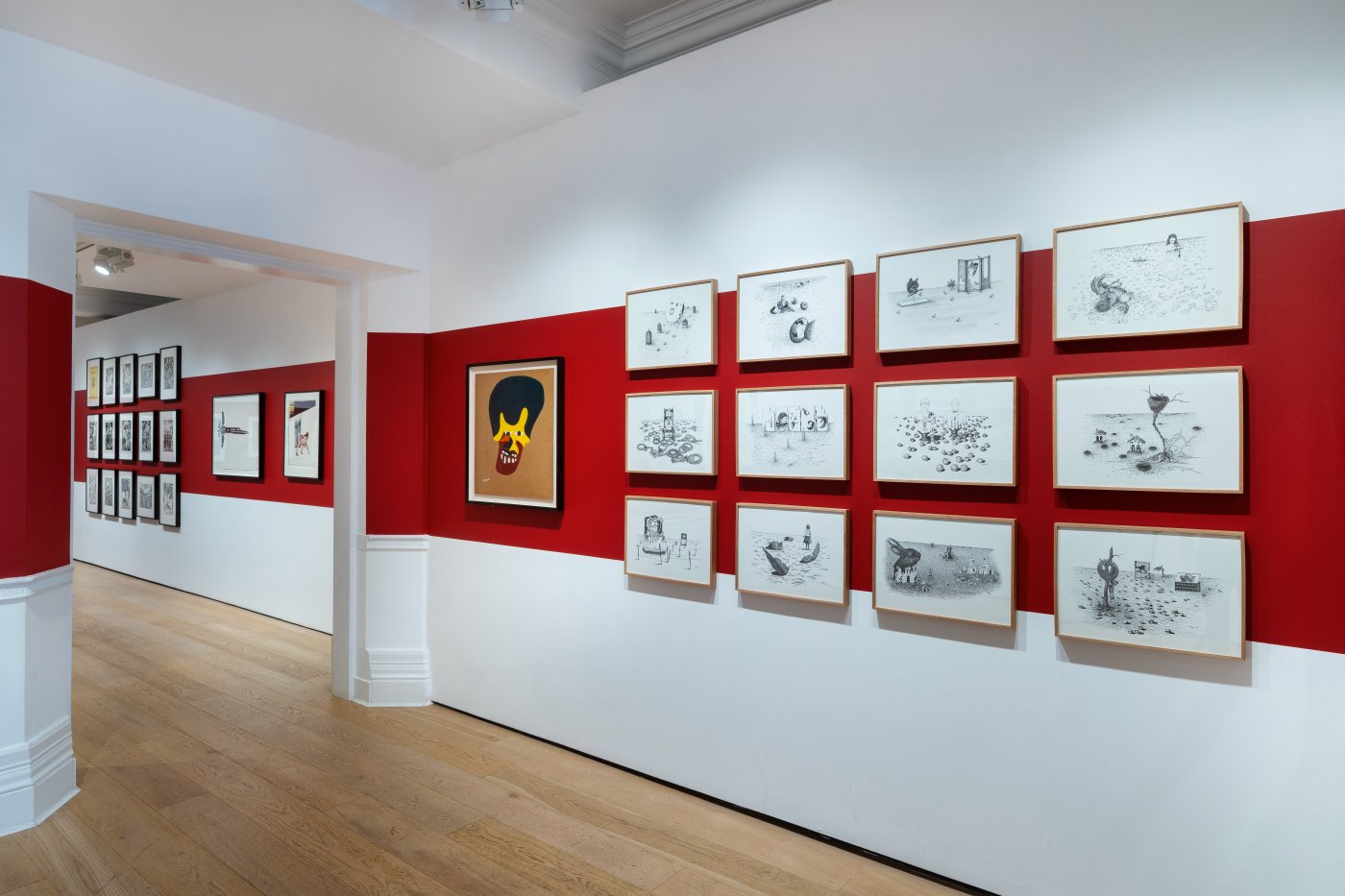 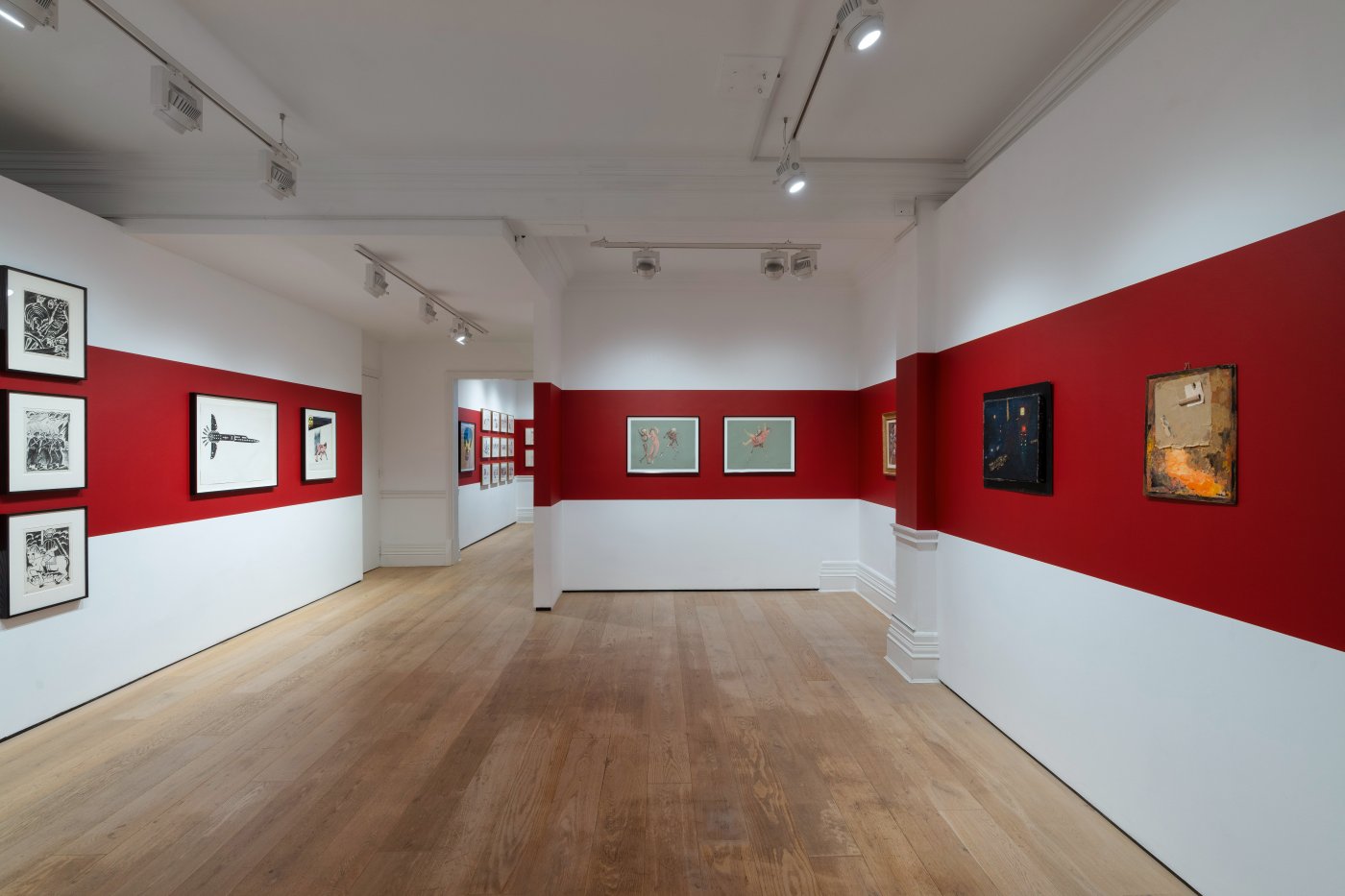 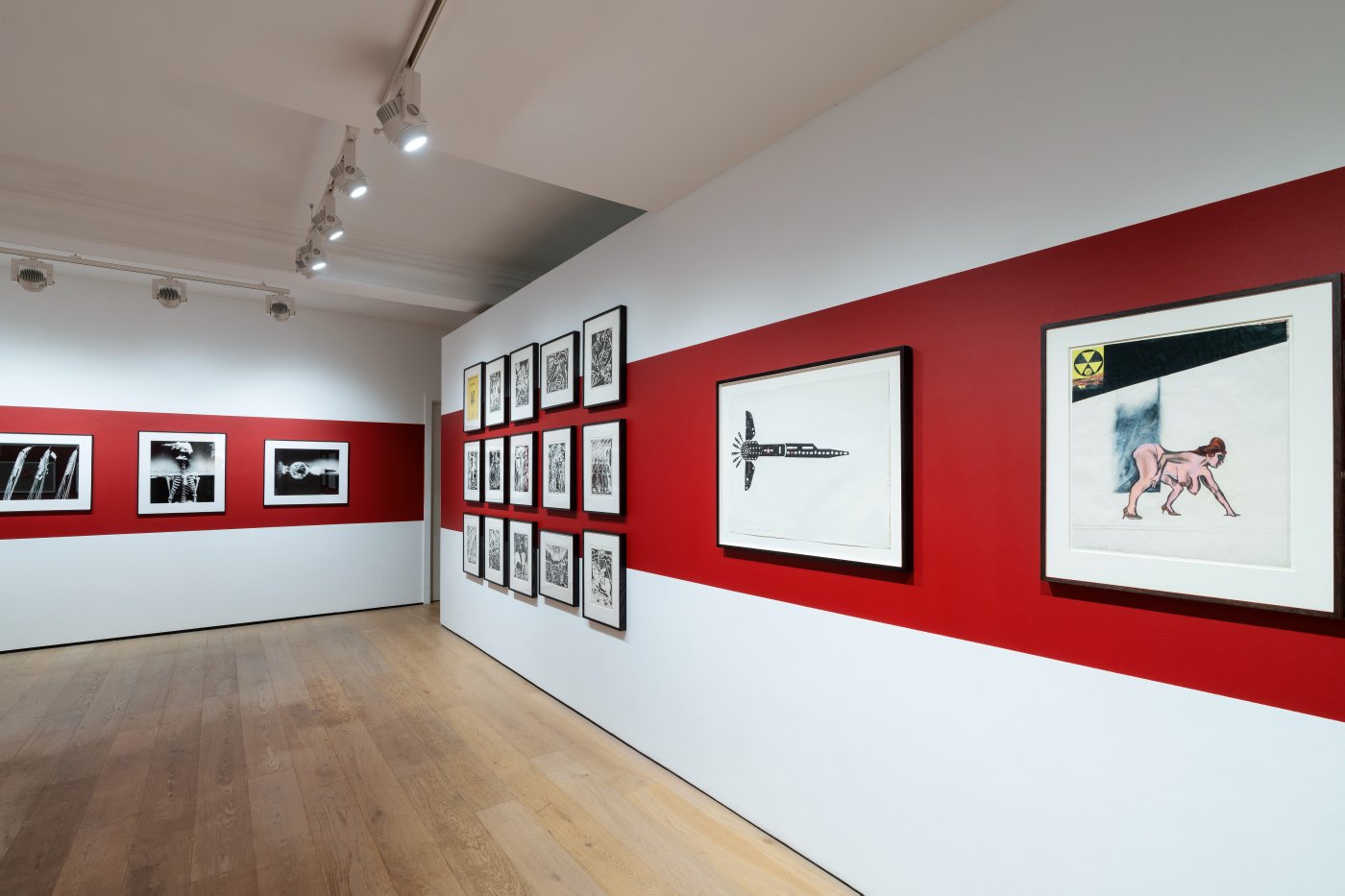 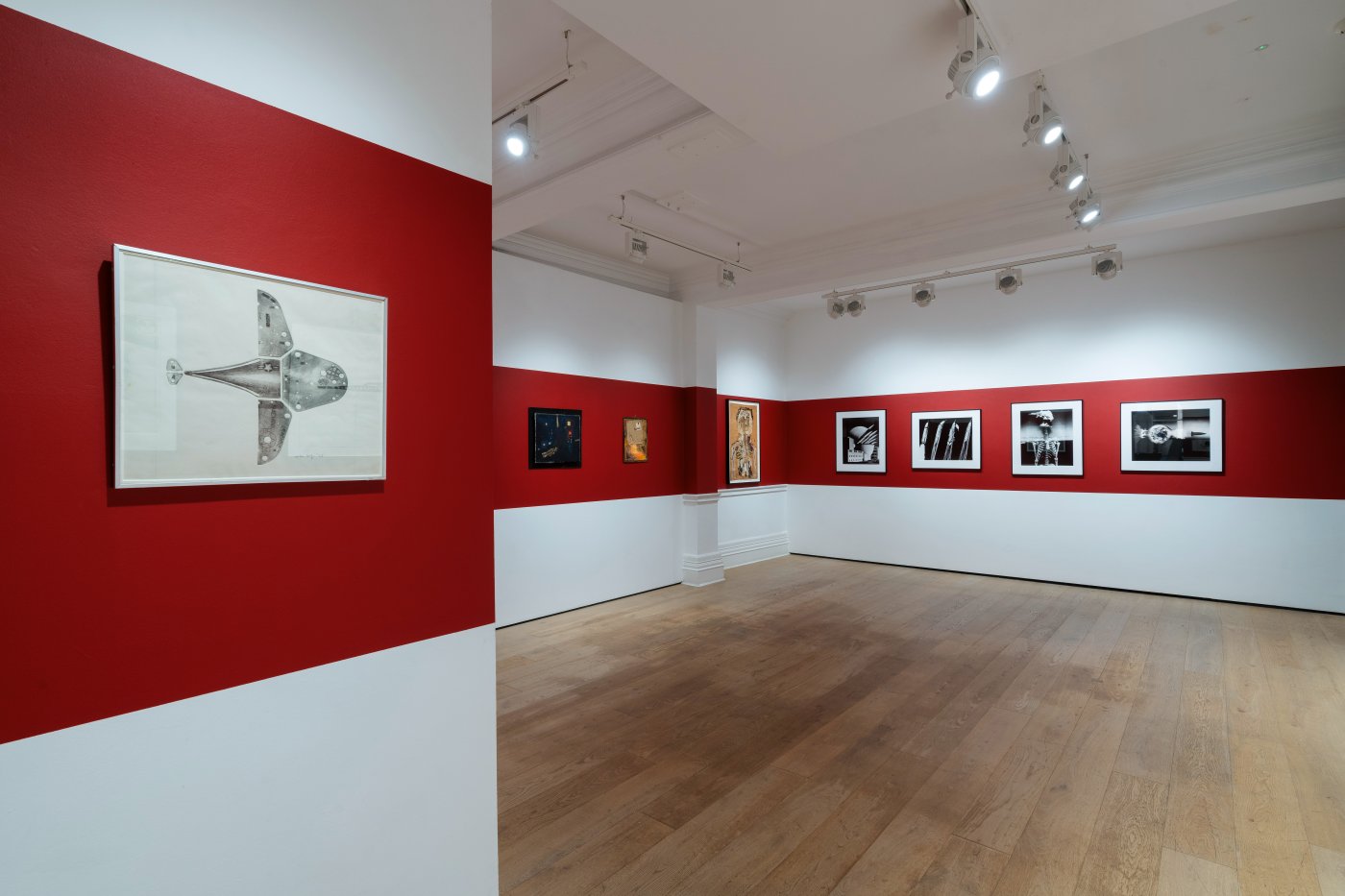 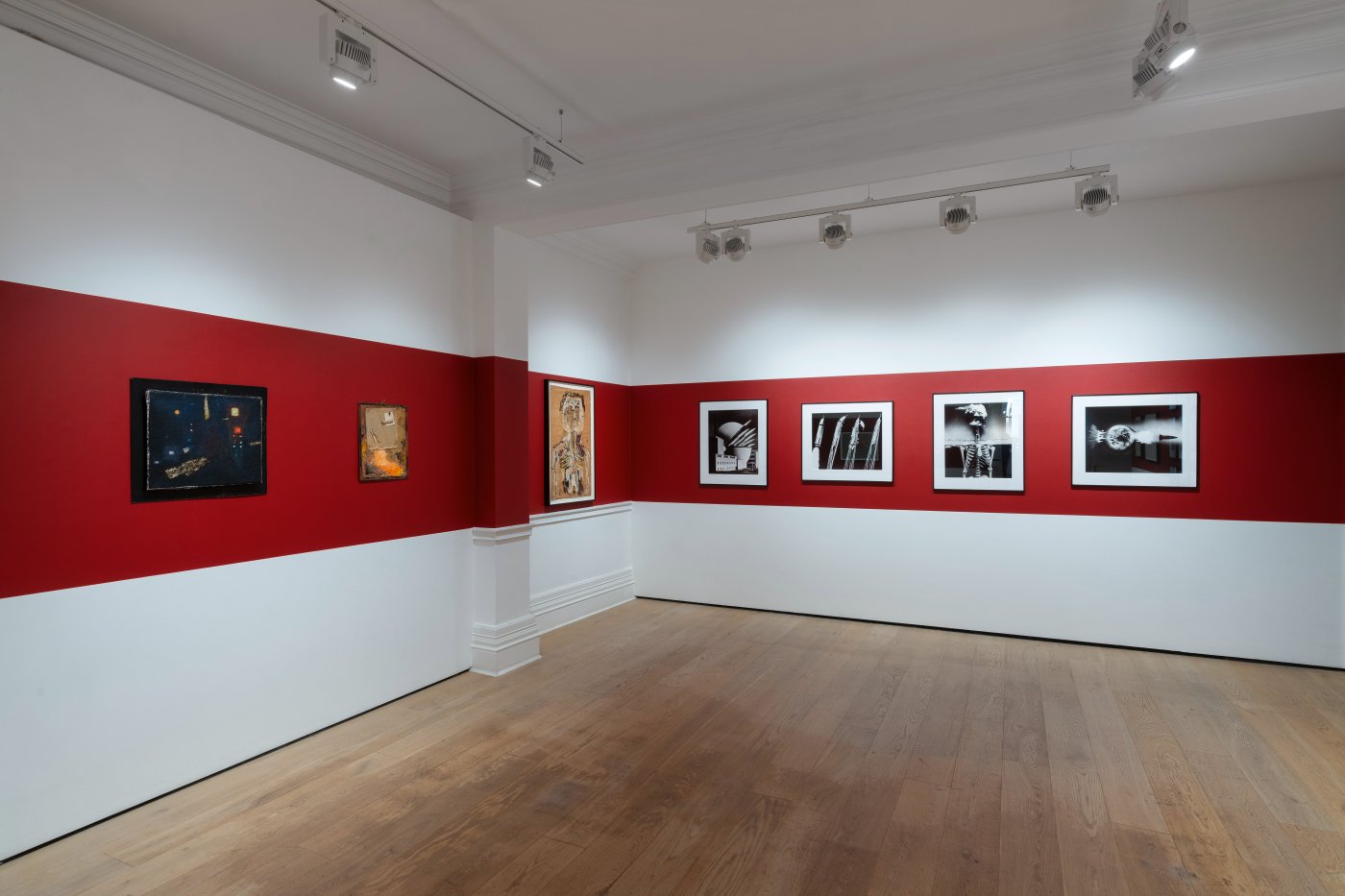 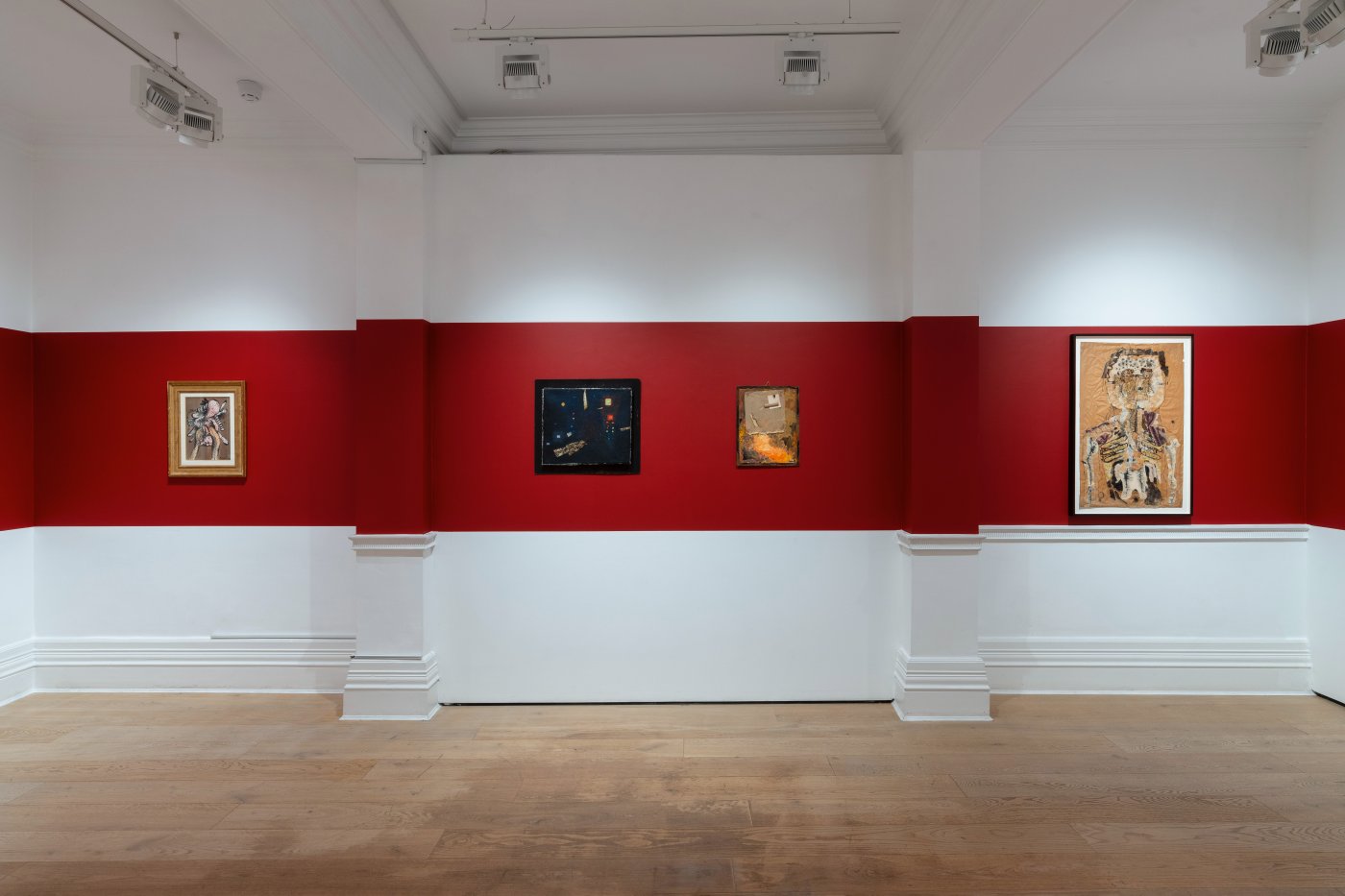 Drawing its inspiration from the celebrated exhibition Face a L’Histoire at the Centre Pompidou in 1996, the exhibition shines a light on the experiences of artists forced to live in a war torn world and the effect of conflict through the decades, raising the uncomfortable question of what, if anything, we have learnt for the past.

The exhibition starts with Mystical Images of War (1914), a portfolio of 14 lithographs created by the Russian modernist Natalia Goncharova as a response to the outbreak of the Great War. A vital member of the Russian avant-garde, Goncharova spearheaded the development of Rayonism, one of Russia’s first abstract art movements, merging Cubist and Futurist influences with cosmopolitan and nationalistic impulses. Goncharova’s cycle of prints tells the epic and “mystical” story about the eternal struggle between good and evil. Using traditional Russian symbols – such as icons, saints, and heraldic arms – with scenes and instruments of war, they frame the battle as a religious mission.

Far from being celebratory, the drawings by Czech Surrealist Toyen capture the horrors of WWII. While Toyen’s work famously addresses gender issues and sexual politics in humorous and fantasy-erotic illustrations, in the aftermath of WWII the artist published two portfolios that addressed the harrowing dimensions of wartime violence and suffering through a Surrealist lens. The Shooting Range (1939/40) is named after the shooting range used for military training but also a popular carnival attraction for children. This duality runs through all the 12 haunting drawings in this cycle, which portray a once-happy realm of childhood populated by destroyed toys and disintegrating bodies. This portfolio features an introductory poem by the artist’s partner, the Jewish poet Jindrich Heisler, which Toyen hid from the GESTAPO during war time. In the second portfolio on view Hide, war! (1944), the post-war world is depicted as a deserted, barren landscape void of any human life, whose past existence is suggested only through skeletons and footprints in the sand.

The systematic killings of the two World Wars are central to the work of South African artist Vivienne Koorland, daughter of a Polish Jew holocaust survivor. Koorland’s monumental, collaged canvases with oil, burlap, paper fragments and inscriptions use existing documentation to present a specific reading of the history. Two of her works on view are part of a cycle of 100 paintings referencing a crude 1916 German military map of the battle of Łódź, the Polish town where the artist’s mother was born, and which she had to flee in at the start of the second German occupation of this city and WWII. Other two – B-1-930 (2008) and K.L.Au (2009) – relate to GULAG prisons and Auschwitz-Birkenau. They are painted on stitched linen that specifically resembles the “cloth” woven from the hair of murdered Jews made in the camps. Both paintings take their cue from stills of Alain Resnais’s famed Holocaust documentary Night and Fog (1956).

Prominent artist, feminist theorist and philosopher BRACHA also addresses the themes of loss and trauma within the context of the atrocities of war. The particular iconography of her works – ambiguous spaces in hues of violets, blues and reds – stems from the history of her family during the Holocaust and historical archives.

THE COLD WAR & THE AVANT-GARDE MOVEMENTS

The post-war era was marked by geopolitical tensions between the United States and the Soviet Union that polarised the entire world. An entire generation had to adapt to the new global configuration that emerged with the Cold War and witness the transition to a mass consumer society. Particularly interested in the American mass culture were Magda Cordell and John McHale, two key members of the Independent Group (or IG, 1952-55), a group of artists, architects, designers, musicians, and critics who met at the Institute of Contemporary Arts (ICA) in London and originated Pop Art, a term coined by McHale himself in 1954. Cordell, a Hungarian Jew who fled to the UK with her sister to escape the Holocaust, was the only female and non-British artist in the IG, with connections to the world of Continental painting and the community of émigrés artists of middle European and Jewish origin who gravitated in the orbit of the Hanover Gallery.

Another English Artist to address the theme of Cold War politics is Colin Self. An innovative printmaker, Self was a central figure in the 1960s boom of the medium. His Nuclear Bomber No.1 (1963) and Nuclear Bomber No.2 (1965) are among the earliest examples of multiple plate etchings.

In the post war era, Poland faced a period of cultural repression imposed by the pro-Soviet establishment, which was loosened after Stalin’s death in 1952, allowing the avant-garde movement to flourish. Holocaust survivors Erna Rosenstein and Alina Szapocznikow were two key figures of the Polish avant-garde. Drawing inspiration from Surrealism and Pop Art, they developed a unique creative language to process personal and collective traumas suffered in wartime and respond to the socio-political struggle of their native country. Rosenstein’s paintings on view exemplify the dreamlike quality that characterizes her entire body of works and originates from her long-running interest in fairy tales. On the other hand, Szapocznikow’s Sculpture Lamp (Double Mouth on Phallus) (1967-69) typifies the artist’s way of fusing late, dark Surrealism with a bright and sexually provocative Pop sensibility.

On the other side of the Atlantic, a Polish Jew was leaving his mark on the history of American art. After gaining a strong following in Paris, in 1962 Maryan S Maryan (born Pinchas Burstein) moved to New York City just as Pop Art was on the rise. Here he developed a personal style imbued with multiple pop influences and the notion of the personnage—using the French term for ‘character’ to name the quirky, grotesque figures that populate his pictorial world. However, albeit strange and caricatural, these personnages are powerful vehicles to convey complex personal and collective histories, testifying to man’s inherent vulnerability and monstrosity.

Full of discerning social commentary, Eleanor Antin’s 100 Boots (1971-73) powerfully evokes the America of the Vietnam war era. Antin is one of the most celebrated conceptual & feminist artists working today. 100 Boots is an epic visual narrative in 51 postcards that tells the tale of 100 black rubber army boots making a “trip” from California to New York City. Initially the boots engage in everyday suburban activities – going to the market, church and drive-in movies – but eventually they trespass on private property, symbolically announcing their solidarity with the antiwar movement. Finally, unable to avoid the draft, 100 Boots too go to war. By the time these legendary heroes arrive in New York, they have become cultural icons, representatives of the new American experience.

The work of Tanzanian-born Everlyn Nicodemus stems from personal and collective trauma. She witnessed death and the destruction of war in her natal village as a child. An artist, writer and a scholar, Nicodemus’ personal ordeal with PTSD and personal grief is a major factor in her work, as is her research in human suffering and black cultural trauma.

The exhibition comes to an end with a new, large-scale edition of Peter Kennard’s seminal photomontage Haywain with Cruise Missiles, made especially for this show, and his most recent prints in support of Ukraine. Haywain with Cruise Missiles shows three nuclear warheads in the idyllic East Anglian countryside of John Constable’s painting The Hay Wain (1821). The work was made to protest against the proposal of honing US nuclear cruise missiles in rural East Anglia. With Ukraine 2022 Kennard is once more taking a stand against injustices and idiosyncrasies, this time protesting the Russian invasion of Ukraine that initiated the current conflict. This series of prints was made in collaboration with the Royal College of Art where Kennard is professor of Political Art. All proceeds for the sale of these prints will be donated to the Red Cross Ukraine Crisis Appeal.