Unit London is pleased to present Option Dzikamai Nyahunzvi’s first solo exhibition in London, entitled Kwatinobva Kunoyera (Sacred Origins). The title draws from a Shona saying that refers to the artist’s own spiritual roots. The expression complicates the concept of origin through notions of space, place and identity. 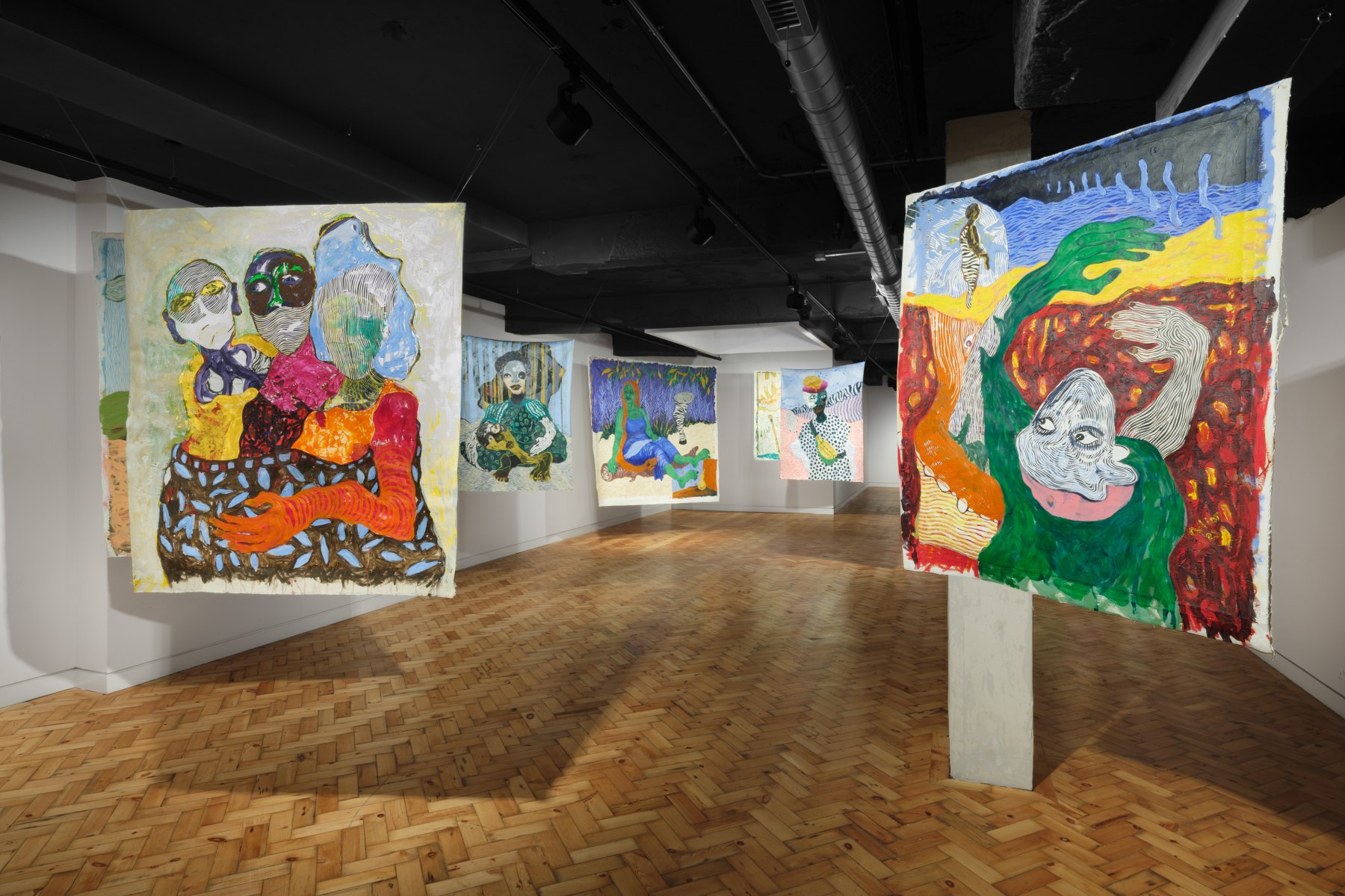 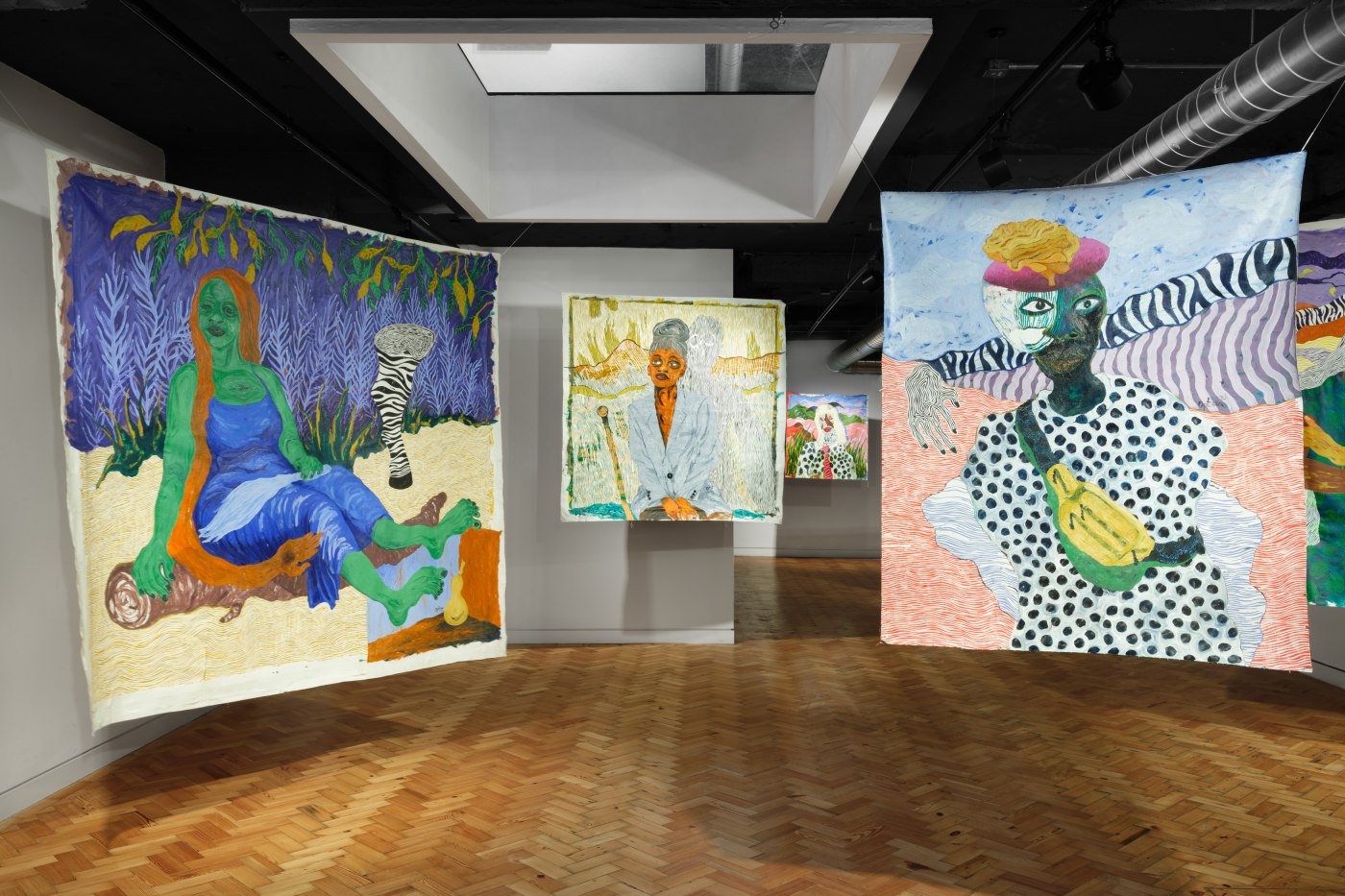 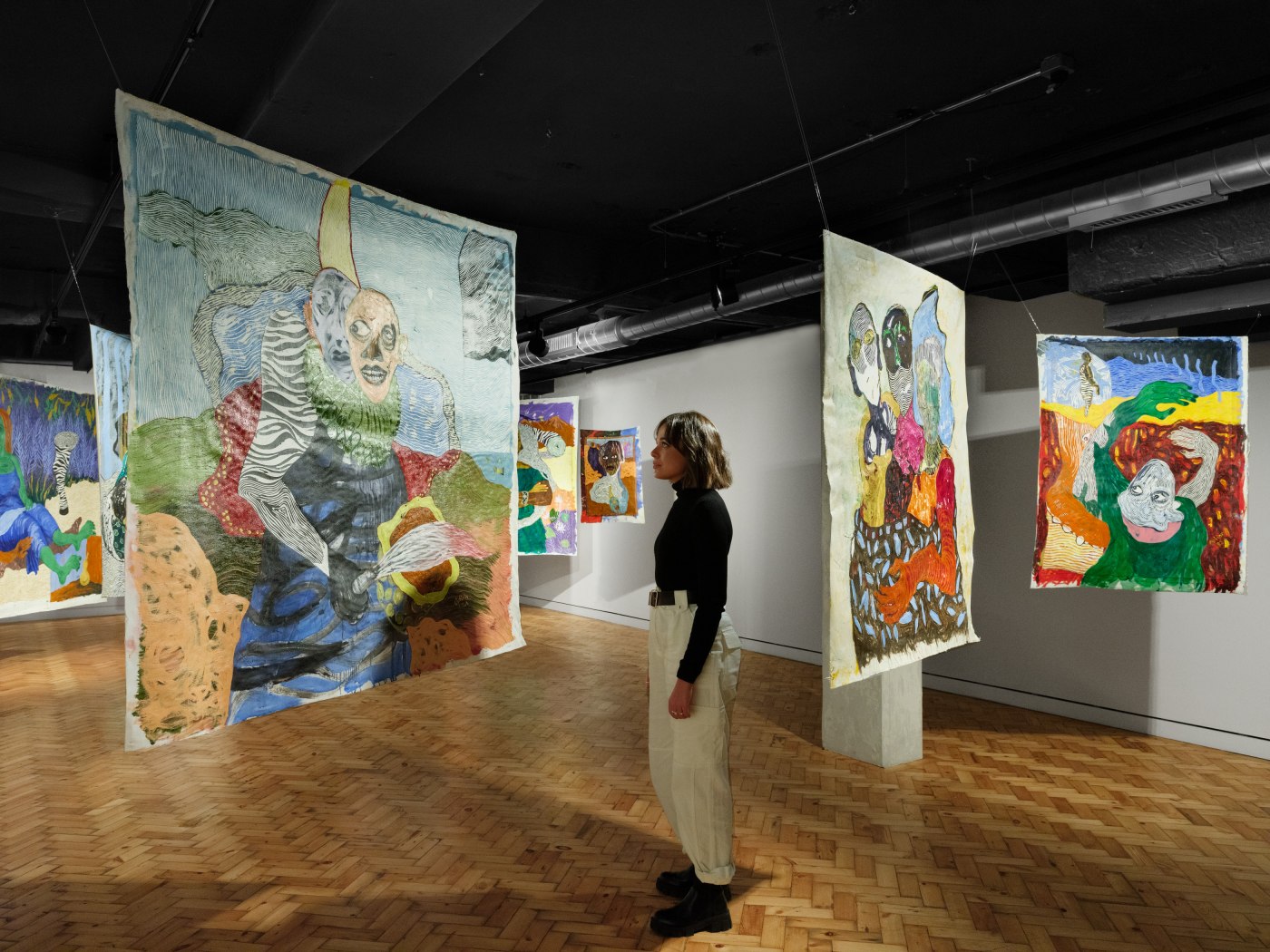 First and foremost, the title of Nyahunzvi’s exhibition focuses on matters of spirituality central to his own Shona culture. The Shona people, hailing from Zimbabwe, are spiritual beings that revere the land they walk on, the wild and domestic animals around them and the plant life and water bodies. All are believed to be endowed with consciousness and are therefore treated with respect. Shona spirits inhabit these rivers, trees, forests and mountains, which are carefully preserved and through which ancestors can be reached through ritual libations.

Inspired by this rich history, Nyahunzvi’s exhibition explores the communion between ancestral spirits and the living. Ghostly apparitions appear as distorted figures that hover in the background or alongside the main figures in the artworks. These spirits have mostly benign characteristics; they are the guardian angels that protect their descendants. Yet, they can be extremely dangerous when angered. Throughout the exhibition, these traces of the past appear to haunt the figures that inhabit each artwork. While the central figures in this body of work are all imaginary, their narratives are not fictional. It is their pensive stares, even their side-eyeing, which force the viewer to consider their individual experience. These troubled souls seem to carry invisible spiritual burdens. Perhaps their gaze looks back at us to search for answers.

In works such as Mbudzi Yemunhu, Nyahunzvi has rendered the human figure in zoomorphic form. The artist comments on how society can identify an individual with a particular animal, in a derogatory sense, based purely on their mannerisms. One can be called a dog or a goat. “The problem arises when one adopts the mannerisms of the animal in question,” exclaims Nyahunzvi. However, this explanation does not qualify the Zebra print, an animal that seems to appear often in Nyahunzvi’s work. The Zebra pattern carries a specific meaning for the artist: Mbizi (Zebra) is his mutupo (totem). The Zebra is the animal to which the artist and his clan are most deeply bound to. Therefore, Nyahunzvi inserts the Zebra pattern into his artwork as a profound and personal acknowledgement of his own ancestry.

Nyahunzvi is a trained printmaker. However, the artist’s practice has shifted to painted canvases and paper collage as he has had difficulties accessing printing materials. The artist’s process consists of pasting Fabriano paper directly onto the canvas, creating layers, which he then cuts into to make visible etching lines. “There is a time I enjoy working with canvas, and there is a time I also enjoy working with paper. So, combining the two is always exciting, it creates room for endless possibilities. And when I combine the two mediums, canvas helps make the artworks stronger and more durable,” explains Nyahunzvi. He then peels away strips of the paper in a process that symbolises individual struggle. “You need to shake or peel off certain burdens and obstacles to progress in life”, says Nyahunzvi.

The flexibility, ingenuity and resourcefulness of Nyahunzvi’s practice is characteristic of a young generation of artists emerging from Zimbabwe during an era defined by economic hardships and socio-economic crises. In this way, Nyahunzvi’s latest solo exhibition demonstrates how his subject matter is inextricably tied to his Zimbabwean upbringing. Nyahunzvi explains that double belonging is a dominant feature of postcolonial society in Zimbabwe. This psychological and societal singularity is mainly characterised by the hybridising of Christianity and traditional African religions. The country’s population is generally nourished by more than one single religion. As such, the body of work that forms Nyahunzvi’s exhibition is rooted in a belief system that is indigenous to his country. In this sense, Kwatinobva Kunoyera (Sacred Origins) is a call to reflect on our ancestral histories and our spiritual existence.