Ólafur Elíasson’s newest exhibition at i8, Beyond human time, brings together recent watercolour artworks by the artist. Watercolours have been a sustained interest of Elíasson’s that he has used since 2009 to investigate colour, movement, and time. The works often conjure subtle illusions of space and light through the repeated application of thin, transparent washes onto a single sheet of paper in a meticulous, highly physical production process. i8 presents two series of related works and a new, large format painting made with melting glacial ice. 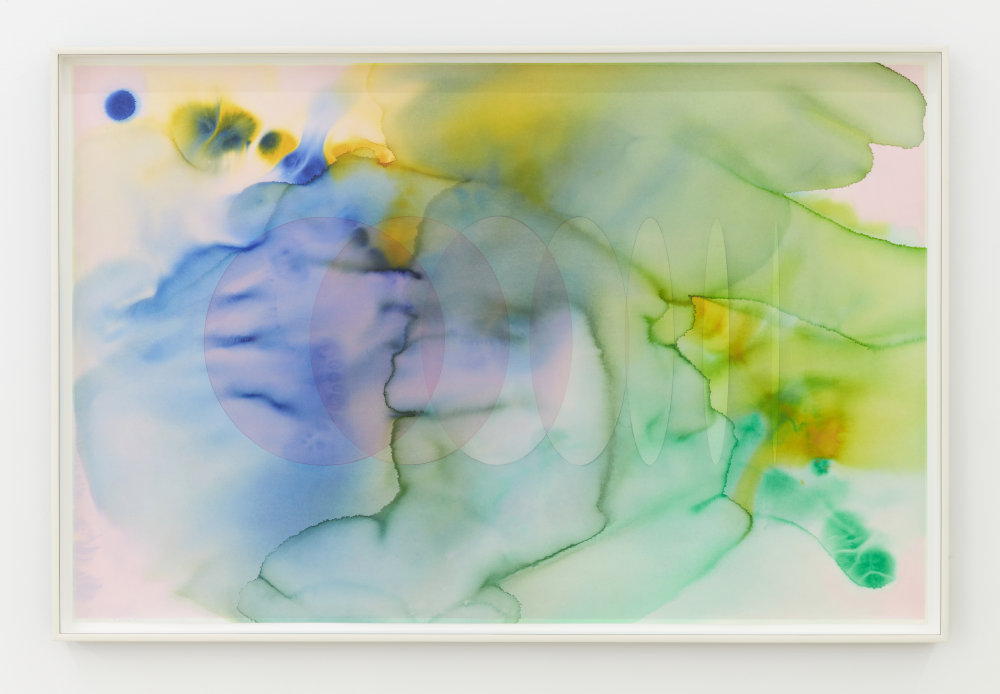 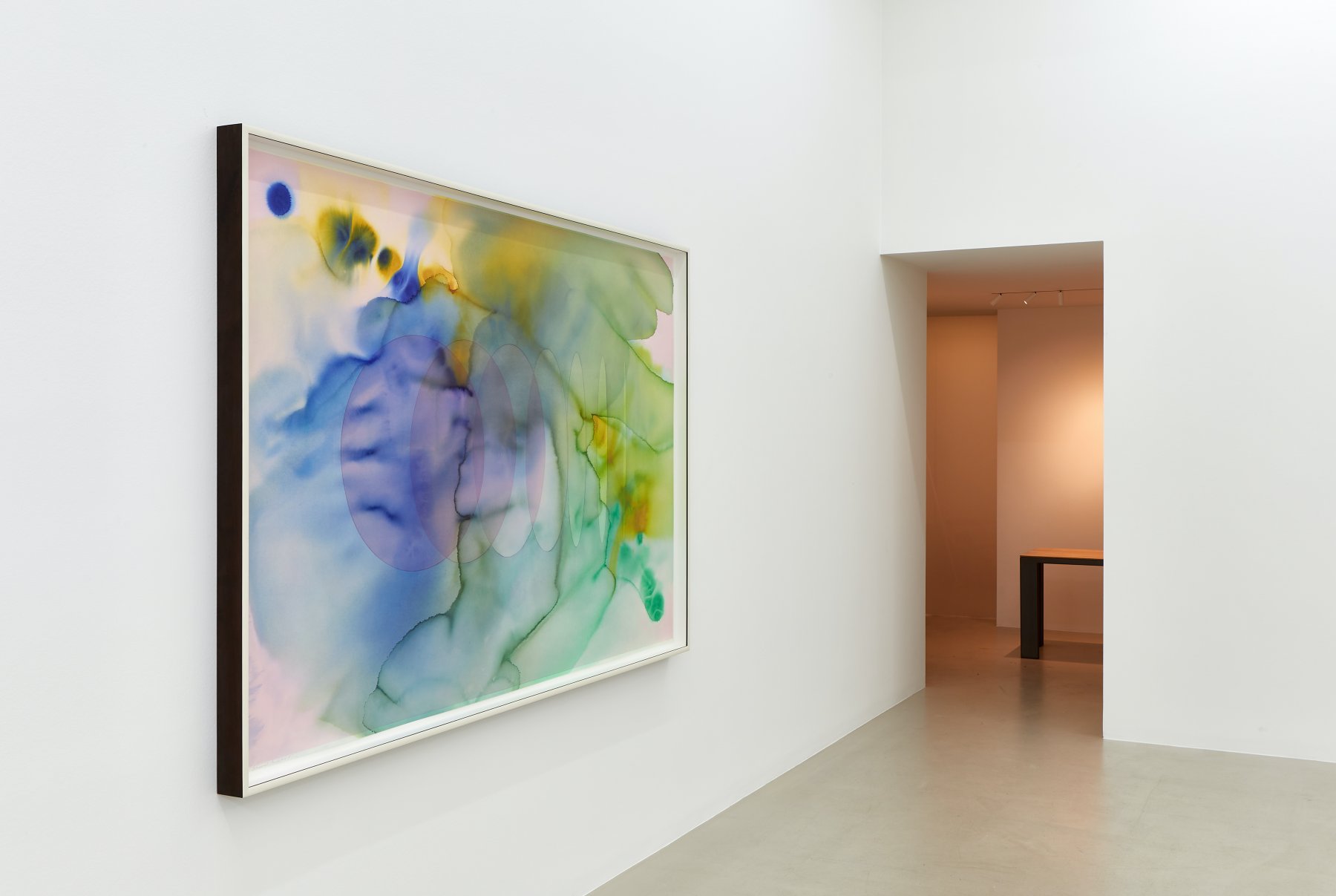 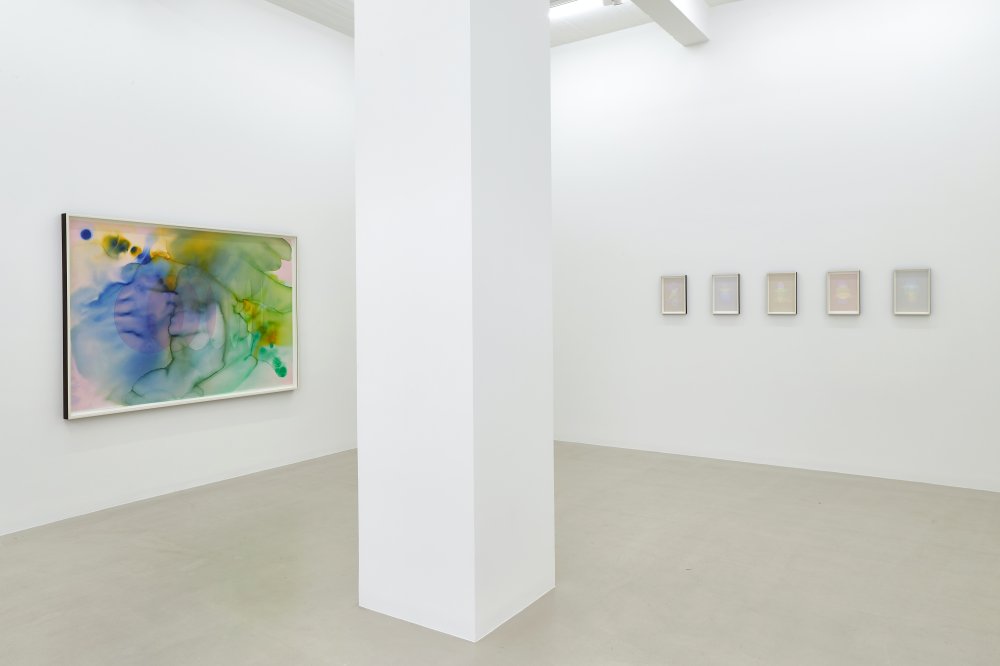 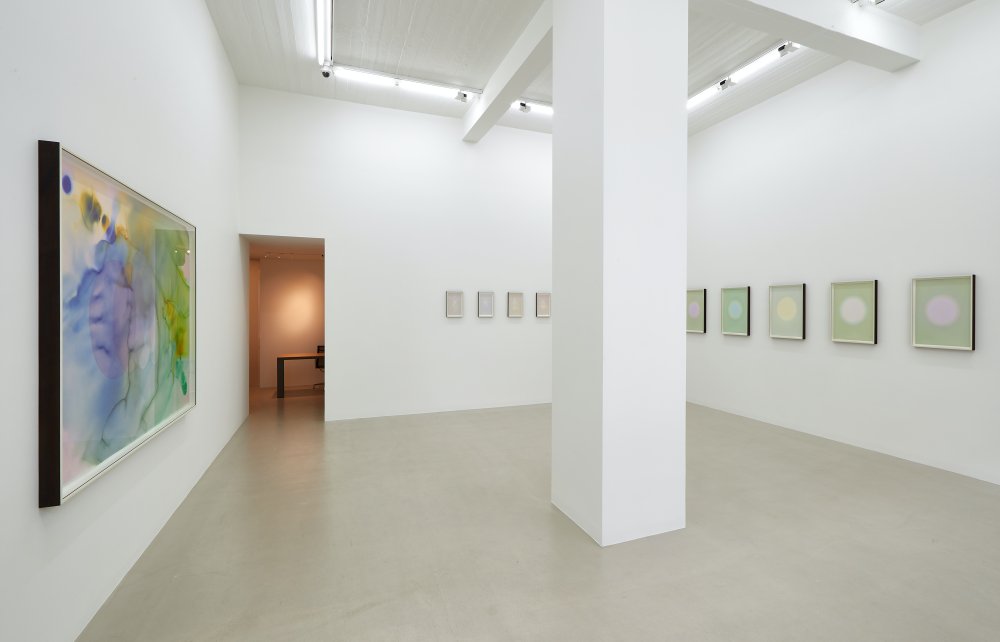 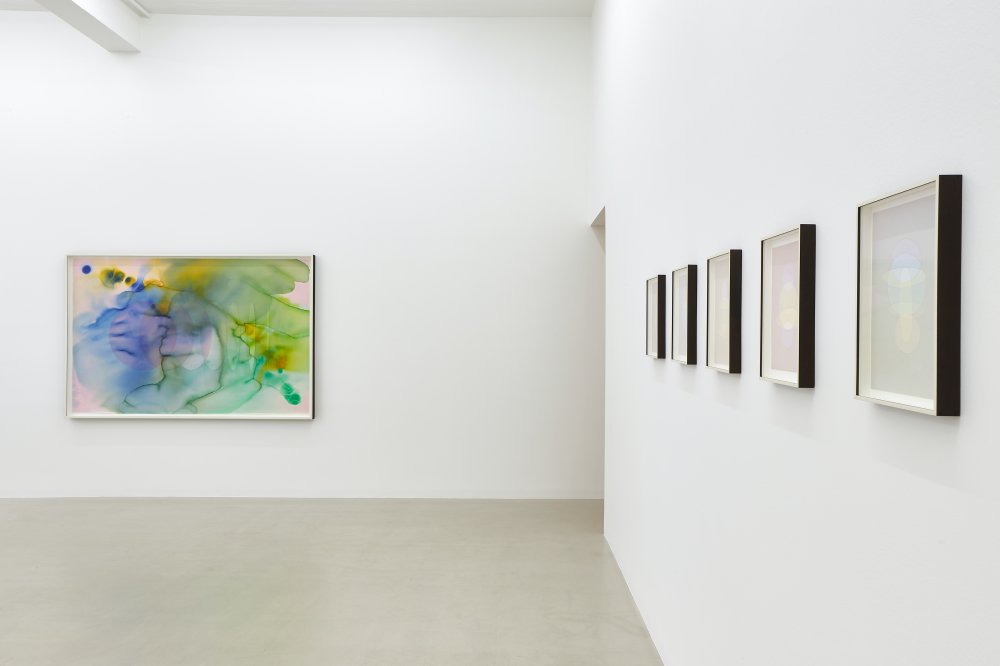 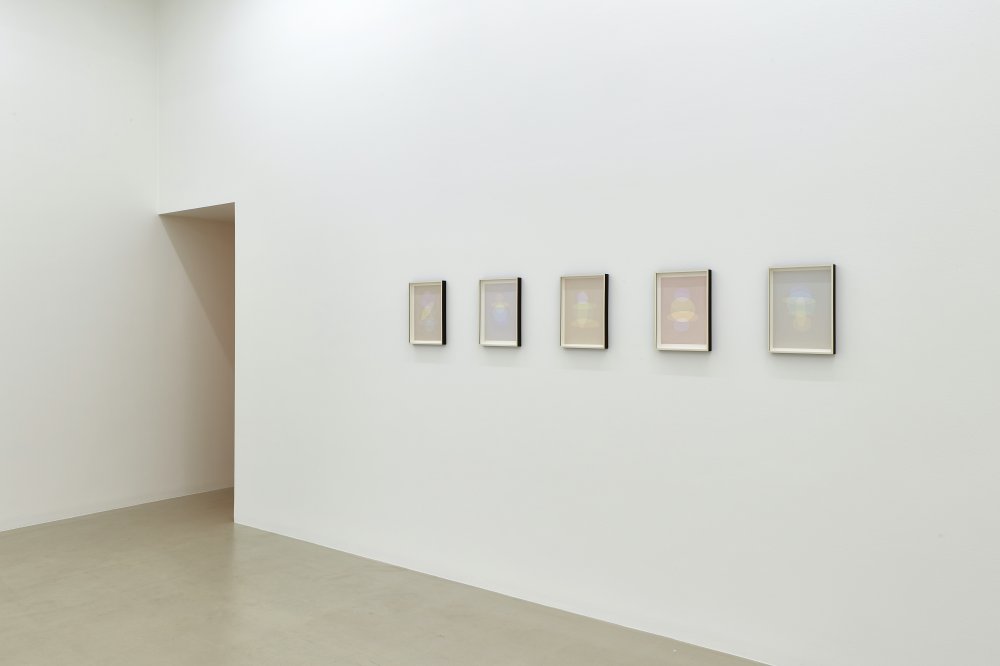 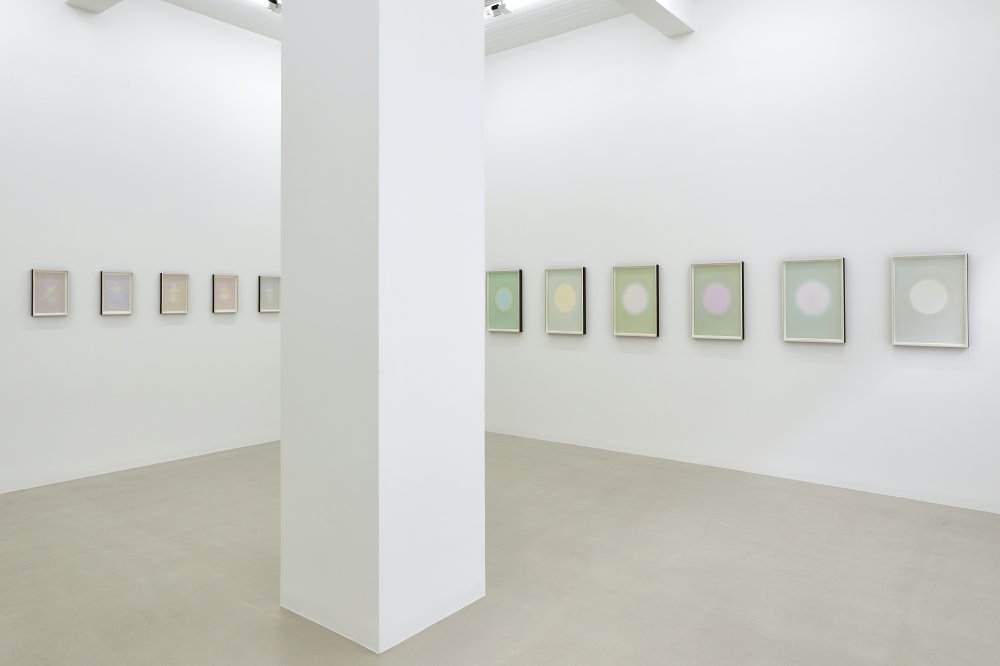 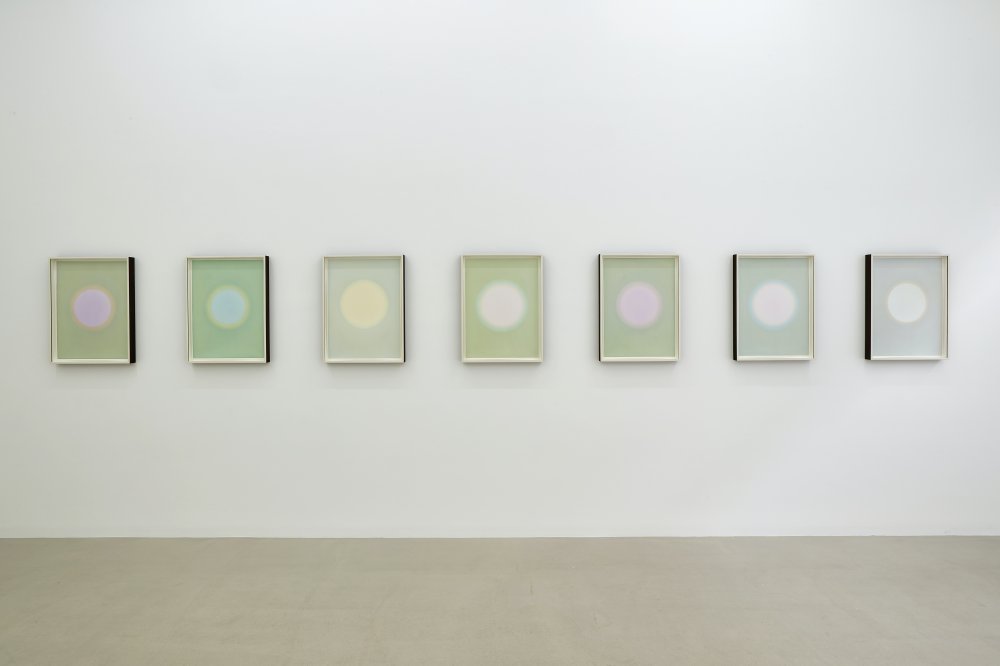 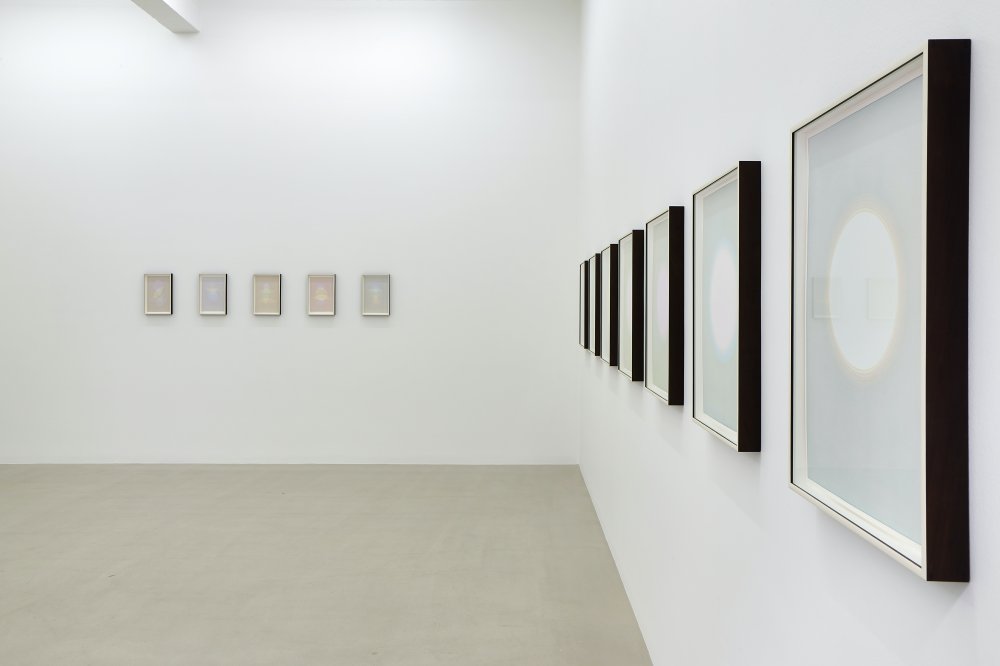 The seven works entitled Solar short-term memory are each built around a central glowing, contemplative circle. Spreading out from this central motif, a series of concentric variegated rings reveal that the surrounding greyish colour field is in fact the accumulation of layer after layer of colour. For viewers who stare at the circle intently for a few seconds, these works also conjure an afterimage effect. A spectral circle in the complementary colour of the work remains in the viewers’ eyes once they look away.

Because this image is actually inside the eye of the beholder – in your sensory apparatus, that is – you are in a sense the one who makes the artwork; you are the artist.

The smaller paintings, called Circular hand dance voids, feature delicate, hand-drawn ellipses that bear the imperfect traces of the drawing process that went into the creation of the works. The overlapping shapes and muted palettes conjure an illusion of transparency and shallow depth. The ellipse is a recurring motif in Elíasson’s oeuvre, important to the artist for its spatial ambiguity and sense of motion.

Both series explore the relation between what the artist terms ‘voids’ and ‘solids’, between the (almost) blank paper and the areas where paint has been applied. Since lighter hues are achieved in watercolours by diluting the pigments with water rather than by adding white, the areas of the works that seem the most luminous are those that contain the least amount of paint. For Elíasson, the artworks arise in this subtle dialogue between intense layers of paint and patches of almost bare paper, just as cities consist of both their built environments and the atmospheric spaces between buildings.

The eponymous work of the exhibition, Beyond human time, was produced using pieces of ancient glacial ice that were fished from the sea off the coast of Greenland during production of the large-scale installation Ice Watch, 2014. For that work, realised by Elíasson and the geologist Minik Rosing on three occasions from 2014 to 2018, the large chunks of Greenlandic ice were allowed to melt in public spaces around Europe to raise awareness of the effects of climate change and to encourage action. Elíasson used small fragments from these blocks for the work presented here. The ice was placed on a sheet of thick paper atop thin washes of colour. As the ice gradually melted, the resulting water displaced the pigment, producing organic swells and fades of colour. Employing chance and natural processes, these watercolours are experiments that attempt to enlist the spontaneous behaviour of natural phenomena as active co-producers of the artwork. The artwork thus bears within it traces of time – the days it took to produce it and the millennia it took the glacier to form.