The fall issue of our magazine Now Modern includes essays by leading scholars and journalists on the Transcendental Painting Group, Paris in the 1950s, Georgia O’Keeffe’s abstraction, and the emergence of modernism in American art, among other diverse features. The exhibition at the gallery presents a curated selection of representative artworks from the Fall edition of Now Modern, and is on view through the end of the year. 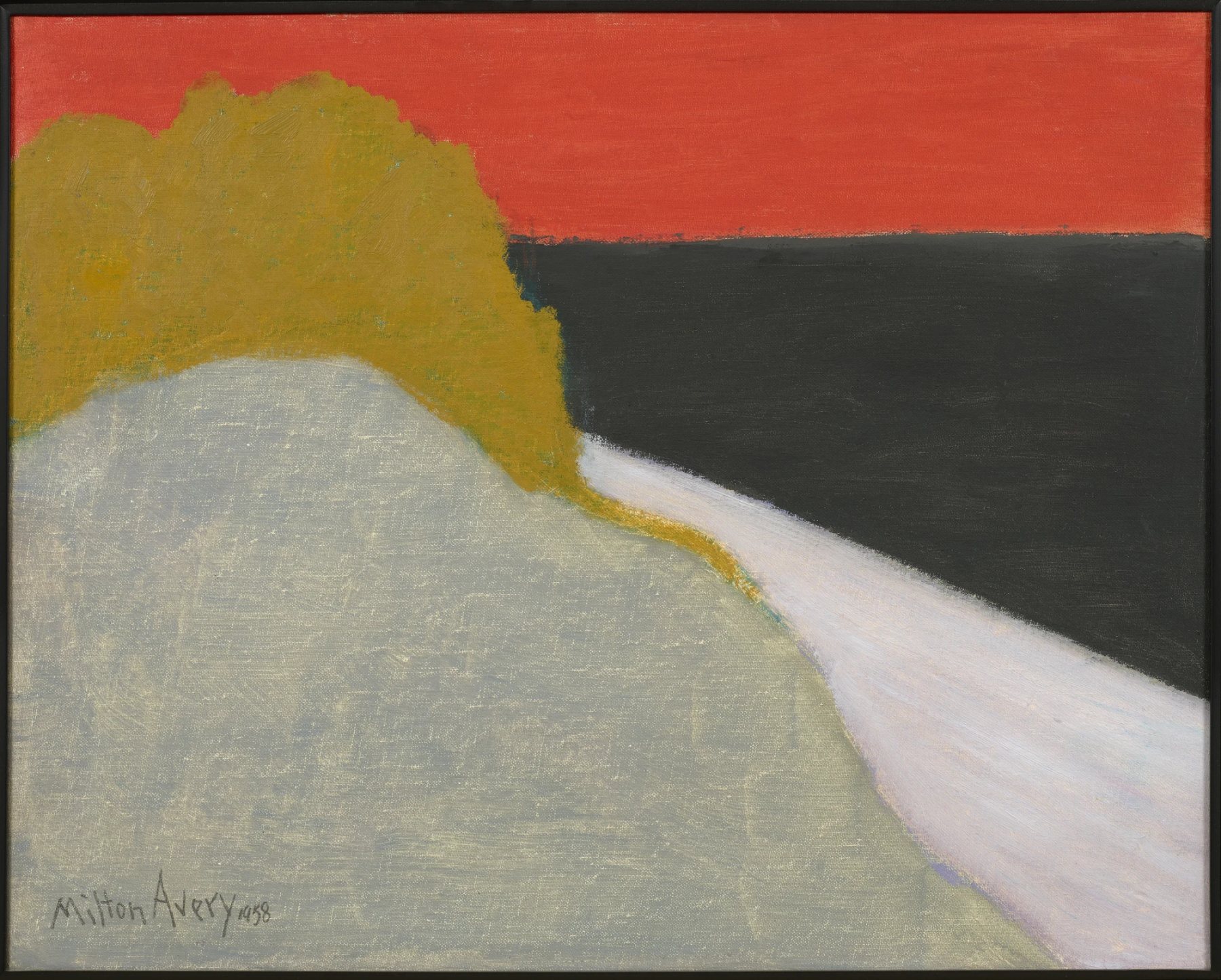 Henrietta Shore made the present drawing, Rocks, Point Lobos, the year of her move to Carmel, California in 1930. Working alongside her friend and fellow artist, the photographer Edward Weston, Point Lobos became a fruitful painting location of hers and is now part of a California State Marine Reserve. Shore employed rich, evenly built-up colors, and utilized the closedcropped view of rock forms to exude a sense of stillness characteristic to much of her oeuvre. The present work typifies Shore’s method of abstraction, which integrated her traditional European fine art training with a keen focus on elements of the natural world, such as shells, flowers, rocks, and roots.

Robert Motherwell began to experiment with collageunder the supervision of Surrealist artist Roberto Matta and at the encouragement of legendary arts patron and collector Peggy Guggenheim. The rich tan, brown, and black tones form Motherwell’s signature deep color palette. The artist’s approach to collage combines found elements with a gestural application of paint, a unique style rooted in historical movements such as Cubism, Dada, and Surrealism yet engaged in a creative dialogue with the contemporaneous movement of Abstract Expressionism.

In Sunflower in Backyard, Burchfield depicted his home and studio, resplendent in late fall afternoon sun, as he described in his journal: “Oct. 29 (Saturday) / P. M. sketch of view showing gable end of studio, our house & fence-row—brilliant October sunlight emotion.” Throughout the composition, Burchfield layered highly saturated, nearly neon hues of green and yellow on top of the primary pictorial layer leading the overall scene to vibrate with a pulsing energy.

Henry Koerner’s Untitled (Woman Nursing Child) reveals an elaborate new mode of expression that evolved out of the artist’s earlier Magic Realist style toward an Impressionist approach defined by fluid brushwork and painted from life. Koerner’s experiments in watercolor in 1953-55 led to the development of a light palette that characterizes his paintings of the period, of which the present work is one of the earliest examples.

Composed of a group of two-dimensional, abstract shapes, the present work is evidence of Shaw’s early Cubist investigations that evolved into the “plastic polygon” style that defined his work for the remainder of the decade. In the present work, the colorful polygons form a figure evocative of a teapot, composed of a bipedal stand, angled handle, and hinged-open lid. Shaw paired fine black and blue lines with rounded shapes, finding parallels in other developments in European and American abstraction.

The quintet Untitled from 1988 is a prime example of Gu¨nther Fo¨rg’s precision and commitment to painting within the boundaries of his methodology. It exhibits contrasting monochromatic sections of quickly brushed-on acrylic paint, bisecting the composition of each panel. Space acts as the central character: the space between color—or lack thereof; the space between paintings side-by-side in sequence; even the space between perception and meaning asks to be accounted for.

Madonna is characteristic of Manierre Dawson’s “Cubist Transliterations,” a term coined by art historian Mary Mathews Gedo for a group of figurative paintings Dawson created in 1911-12. The paintings appropriate subjects from historical European masterworks Dawson would have seen during his six-month European tour in 1910. In the present example, Dawson deftly reinterpreted the central figure of Leonardo da Vinci’s Virgin of the Rocks (c. 1491-1508; The National Gallery, London).