No horizon, no edge to liquid explores the concept of cultural hybridity as a space in which cultures meet: where bridges are built between societies through the processes of communication, negotiation, and translation. 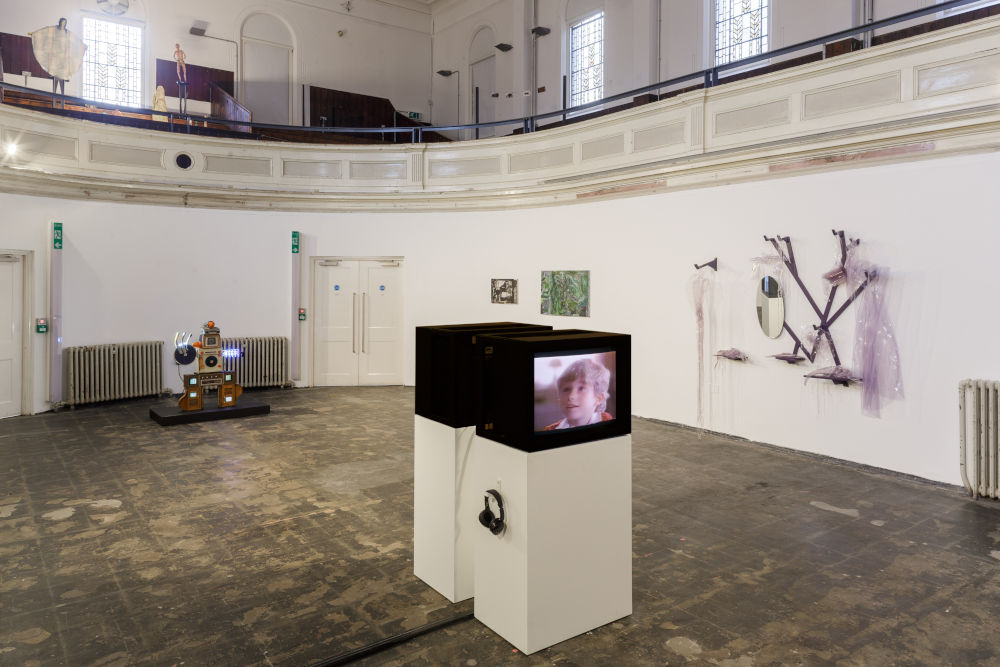 The exhibition includes work by thirteen artists, all of whom were born outside North American or continental Europe, although many have since immigrated there. Encompassing a diverse array of media – painting, sculpture, video, installation and new media art – the exhibition explores how varying forms of hybridity can manifest through artworks: it might be expressed through materiality, the blending of traditional and new media, the dialogue between two cultures, or the interplay between art/craft, high/low or popular/elite.

Cultural hybridity is a pertinent topic in 2020: a point in which globalisation seems maximised, movement and migration seem inevitable, and yet shared borders worldwide are becoming increasingly rigid, with the UK poised to remove itself from the EU. Cultural hybridity seems both a logical outcome of our cultural moment, and a potential tool for resistance against rising nationalist sentiments. At the core of the key post-colonial theorist Homi Bhabha’s works on cultural hybridity are descriptions of hybrid narrative, experience and self-conscious perspective. Bhabha argues that new transcultural forms are produced throughout contact between a coloniser, or dominant culture, and its subject. This exchange produces a new ‘hybrid’ that stands in opposition to fixed national identities of cultures and belonging, negotiating a space in resistance to the dominant discourse, and questioning the idea that ‘culture’ is ever singular.

Most of the artists in No horizon, no edge to liquid are products of international movement – born in one place, educated in another, settled somewhere else. Some have chosen to remain in their homelands, whilst their artworks travel across the globe. Their works are manifestations of multiple forms of cultural hybridity, looking at and intertwined with multiple cultures. In some cases this is a literal intertwining: in a series by Alvaro Barrington, coarse yarn is woven through found postcards depicting European landmarks. Engaging with a tradition of women’s handicrafts, from the Greek myth of Penelope to the textiles made by the artist’s own aunts in Grenada, Barrington uses this domestic and ‘minor’ technique to overwrite the implicit power of European architecture with his own narrative, building an alternative vision into an existing view of the world.

Saya Woolfalk uses science fiction and fantasy to re-imagine the world in multiple dimensions. With her project Life Products by ChimaTEK (2014), Woolfalk has created the world of the Empathics, a fictional race of women who are able to alter their genetic make-up and fuse with plants. This work is a continuation of Woolfalk’s body of work that builds the narratives of these women’s lives, and questions the utopian possibilities of literal cultural hybridity. Not all explorations of hybridity are utopian, however. Raqib Shaw’s opulent paintings of imagined fantastical worlds, full of intricate detail, rich colour, and jewel-like surfaces, mask the intense violent and sexual nature of their imagery. Inhabited by phallus-headed birds, bug-eyed butterfly catchers, reptilian warriors, these fantastical worlds are laden with nature and irony. They fuse motifs from old master painting with imagery exploring Shaw’s own metamorphosis, having grown up in New Delhi as a Muslim minority, to tell a narrative of becoming, negotiating and being.

Other artworks raise questions about who has access to hybridity, and whether hybrids can also be produced by the ‘dominant’ culture. New Zealand-born artist Francis Upritchard employs a variety of existing historical and cultural materials, found objects, and people within her practice. Although Upritchard has on occasion described her work as ‘meaningless’, it holds distinct references to existing history, culture and people. By presenting works that evoke or blur certain traditions, histories, cultures and ideologies, Upritchard critiques the practice of many institutions that collect and display native items of curiosities, removed from context.

By presenting disparate perspectives of cultural hybridity, No horizon, no edge to liquid poses the question: Is cultural hybridity an amalgamation of different components or is it a ‘third product’, created by the combination of two or more elements? Arguably, the process of hybridisation has existed as long as humans have had the capacity to travel beyond their own communities, but as new technologies enable intercultural contact (from the Internet to more affordable international travel), the pace of cultural hybridity accelerates and its scope widens. The artworks presented are a means of communication within the space of the exhibition, but are they merely mouthpieces for the artists, relaying a specific cultural experience, or do they speak for themselves, as autonomous cultural hybrids?

No horizon, no edge to liquid is curated by students from MA Culture, Criticism and Curation at Central Saint Martins; MA Curating and Collections at Chelsea College of Arts; and MA Film Programming and Curating at Birkbeck College. Combining an international cross-section of curatorial and artistic perspectives, the curators are: Rosa Abbott, Krishna Balakrishnan, Kateřina Čuprová, Celina Loh, Hao Long and Gaia Maggio.