Nahmad Projects is pleased to present NIGHT | Max Ernst and Yves Tanguy with Urs Fischer. Generating a discourse between the contemporary artist’s universe and the legacy of two Surrealist masters, the exhibition includes paintings by Max Ernst (1891-1976) and Yves Tanguy (1900-1955) alongside the debut of a new wallpaper installation by Urs Fischer (b. 1973). 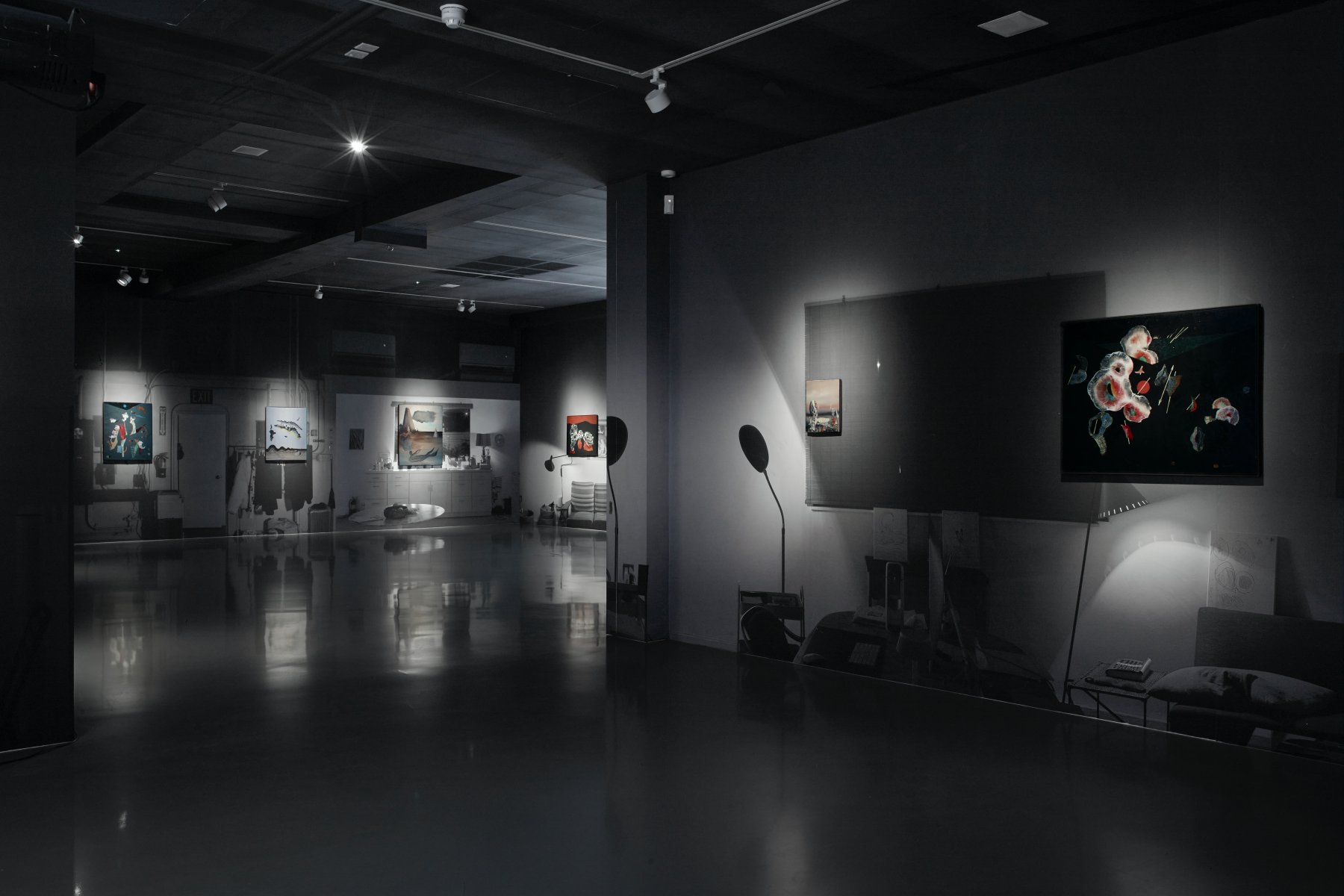 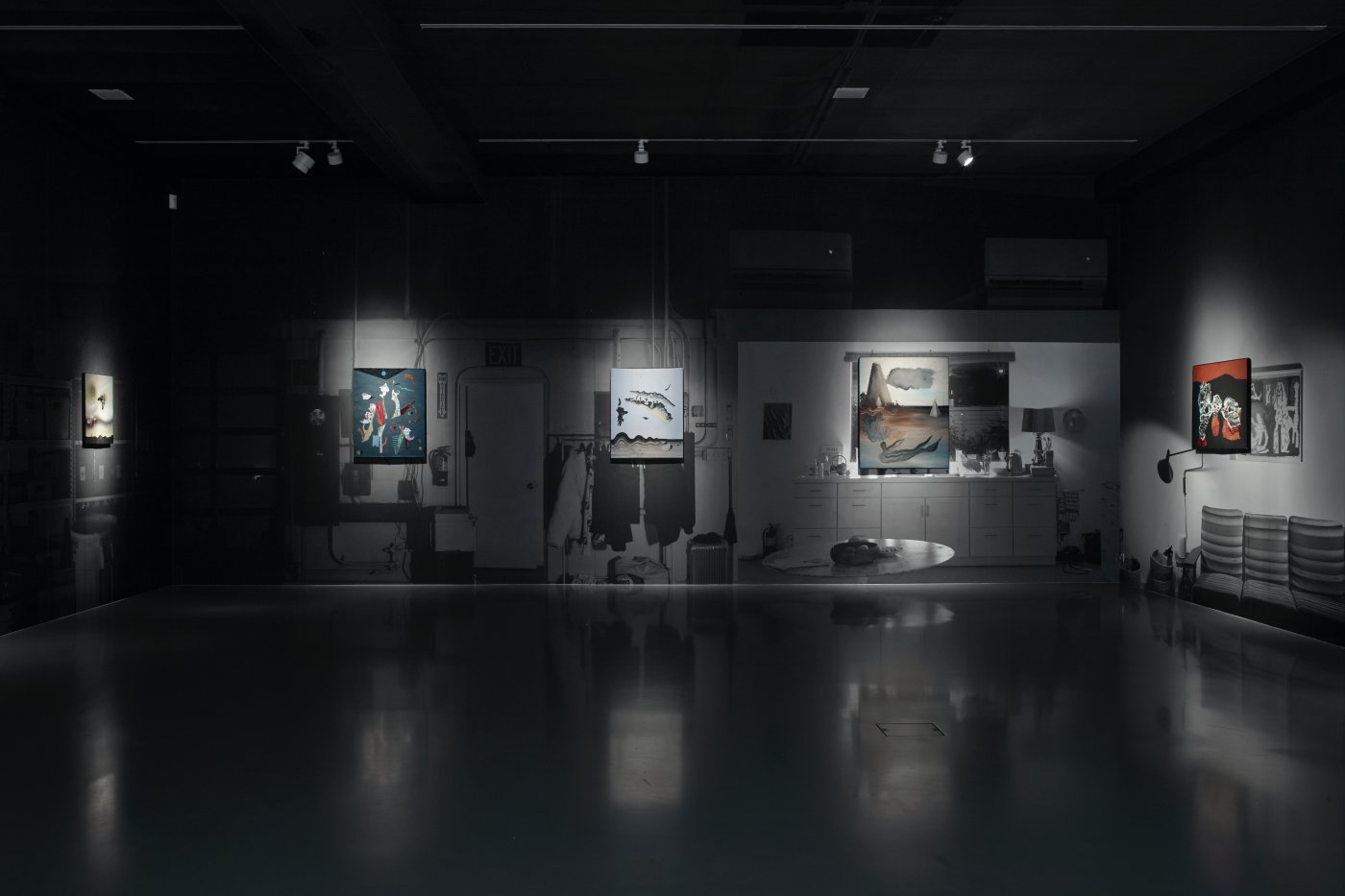 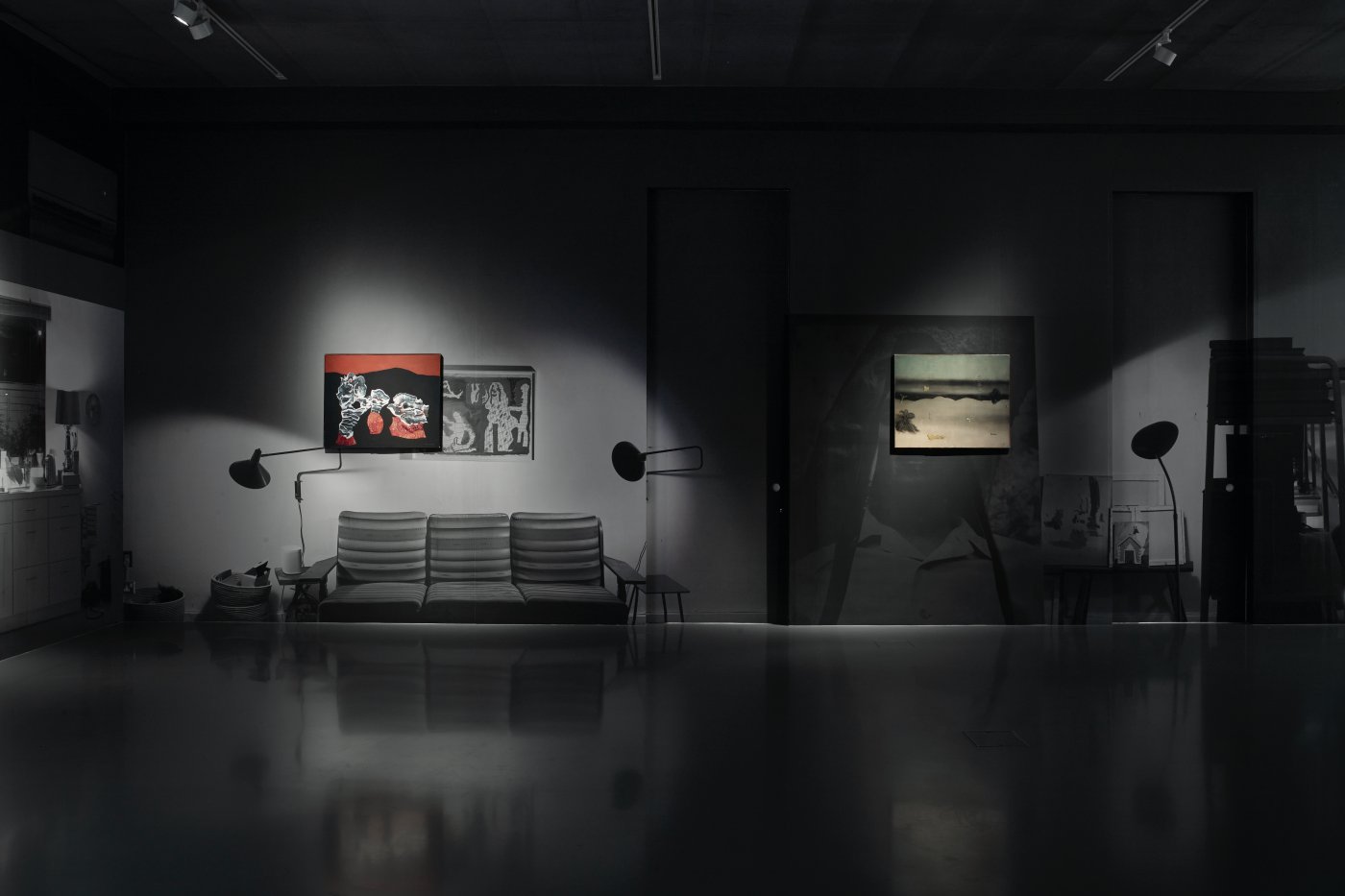 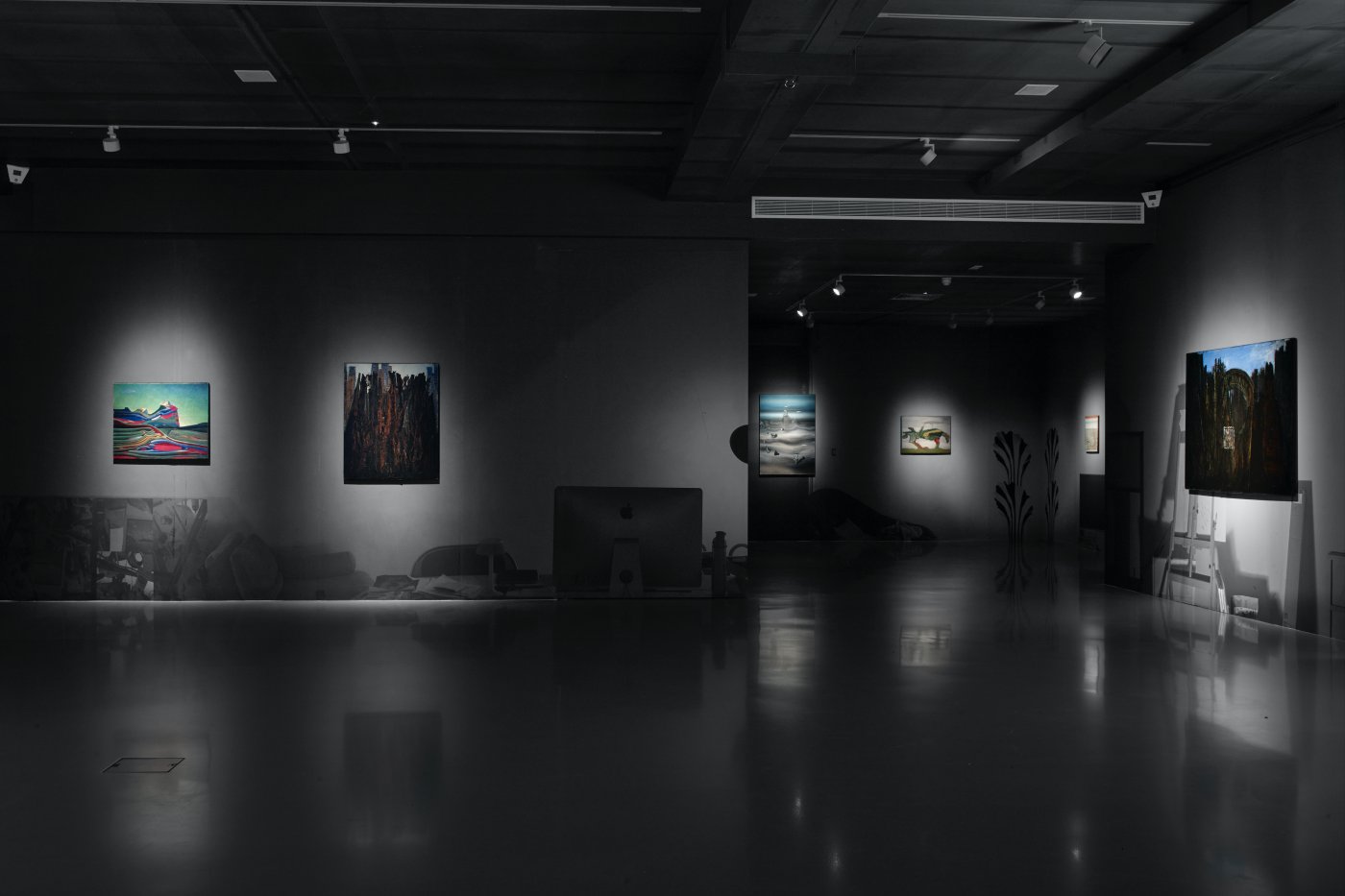 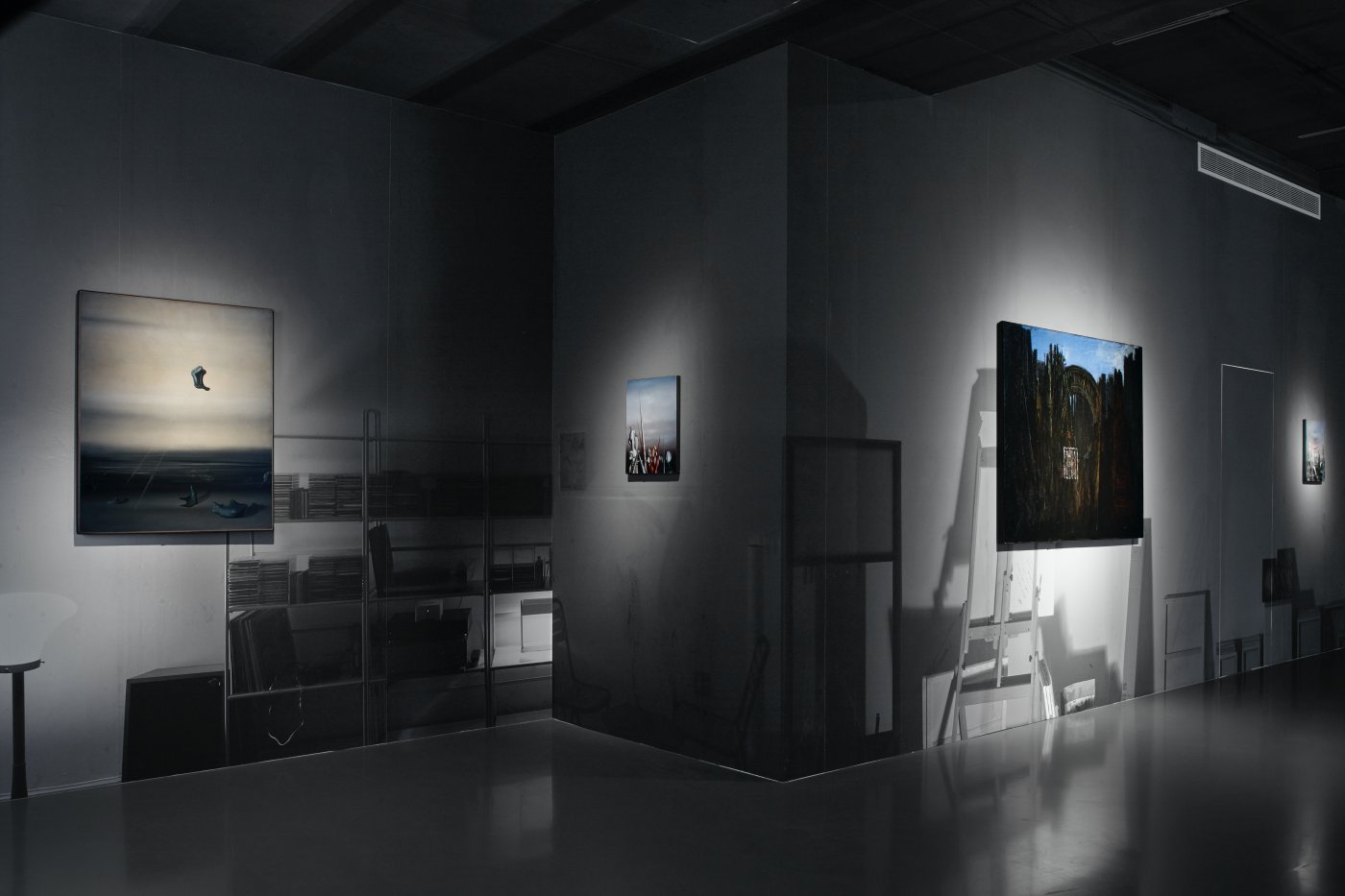 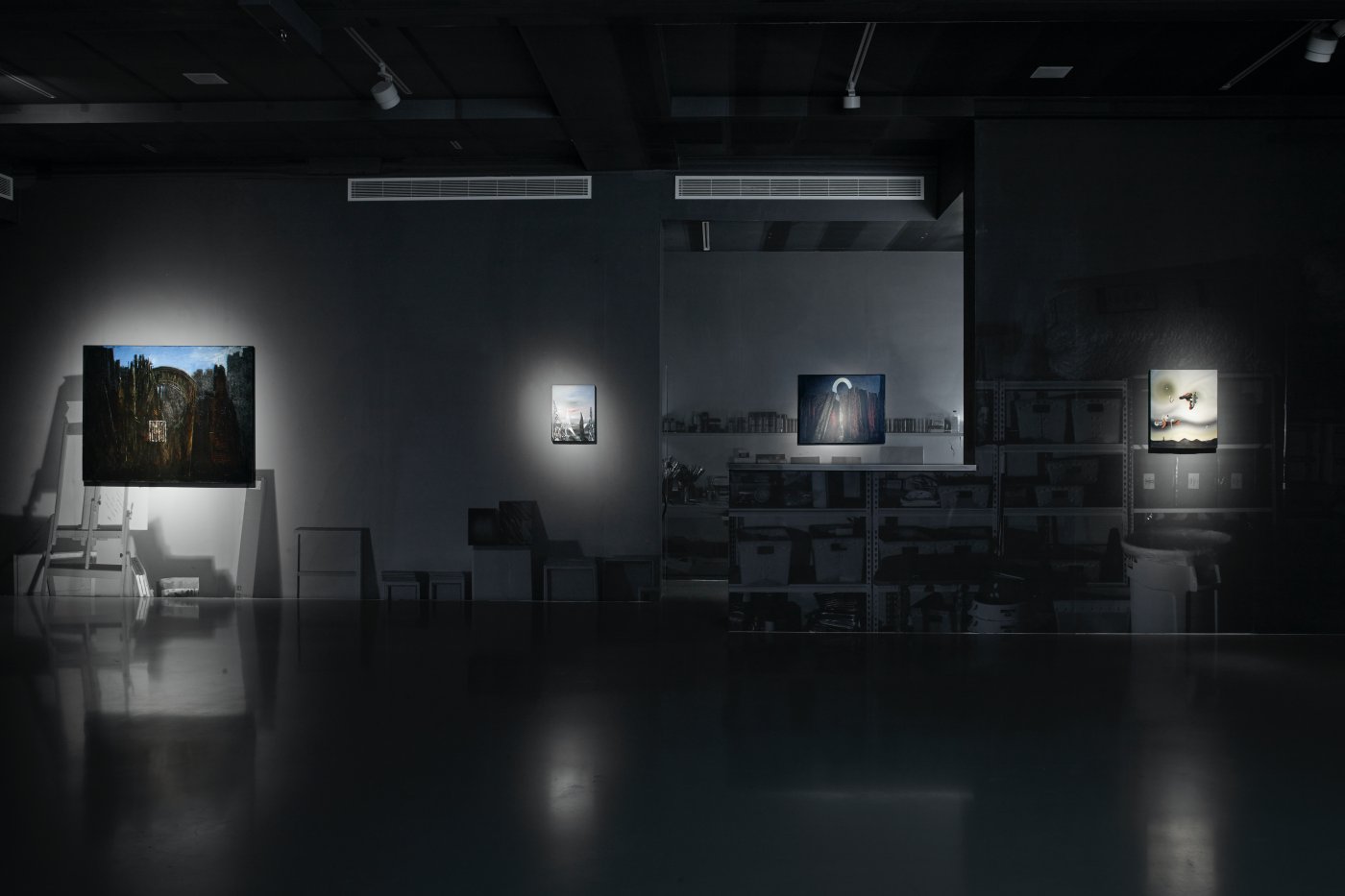 NIGHT is the second chapter of a two-part project, with the first half titled SUPERUNKNOWN which took place at Nahmad Contemporary, New York, in September – November 2020. This first exhibition presented Ernst and Tanguy alongside an urban environment filled with foreboding for the future, a reflection on our changing society and its dialogue with the historical context of Ernst and Tanguy’s 1920s and 1930s works.

This new environment turns its focus inwards, exploring the metamorphosis of consciousness. The installation on Cork Street is composed of photographs taken of the artist’s studio at nighttime, a scene of wakefulness when the world is asleep, crystallised and lucid, replacing trepidation with acceptance of change and considering our world’s emergence into a new reality. Transporting the visitor to the liminal space between reality and artifice, wakefulness and a dream, it is up to us to search for clarity in the shadows. The wallpaper sets the viewer’s vantage point at an unnaturally high angle, the visitor gazing down as a hovering spectator.

Max Ernst believed that: “every normal human being (and not merely the ‘artist’) has an inexhaustible store of buried images in his subconscious, it is merely a matter of courage or liberating procedures … of voyages into the unconscious, to bring pure and unadulterated found objects to light.” (1) Here, we step into Fischer’s museum of the mind, the paintings levitating over the darkened studio as if suspended in his imagination, except miraculously the original masterpieces have appeared, unframed and raw in their materiality.

Fischer’s studio is an alchemical space, where ideas metamorphose into tangible form. Emptiness between things provides silence for ideas to emerge: dark corners, potent shadows cast by singular lighting, the shiny reflection of a metallic kettle, create a new surreality in a contemporary world.

In Franz Kafka’s famous moment of metamorphosis, his character transforms at home in the comfort of his own bed. The familiar pivoting to unfamiliar is a key Surrealist mechanism which animated both Ernst and Tanguy’s practices, and continues to inform Fischer’s strategy today. From an historical moment of disorder, the paintings also function as reminders that periods of great change are inevitable, and we can approach scenes as new vistas containing potential and most importantly freedom of thought.

The works included by Max Ernst are from a period when the artist was seeking out a new pictorial vocabulary. Each painting is a portal, floating away from the tyranny of rationalism which he saw as the root of the evils of the First World War. Max Ernst sought to jolt himself and his audience awake by creating artworks as starting points for the subconscious to generate a response. Initially, the artist achieved this with collage, which informed his tendency to include the unknowable or unexpected in his compositions. He said “creativity is that marvellous capacity to grasp mutually distinct realities and draw and spark from their juxtaposition.” (2) Among several forest paintings, Cage, forêt et soleil noir (1927) triggers the spectator’s pre-modern subconscious, developed to scan undergrowth for sustenance and predators simultaneously, using dense marks that appear organic and obscuring the artist’s hand. Diving into the tangled undergrowth of the subconscious, Ernst seeks to free the viewer of their conscious shackles.

Yves Tanguy’s paintings are windows onto a metaphysical world created with silky amorphous elements and graduated tones. Composed without any underdrawing, the artist is recorded to have flipped his paintings vertically while shaping his forms to increase the surprise of their final rendering. Though rooted in the basic precepts of our reality with a horizon line and gravity, he populates his worlds with impossible biomorphic minerals which are neither sentient nor dead, undulating through space in waves, under the influence of some invisible moulding pressure. The shapes appearing in his landscapes have been read as bulges of oil paint, making characters of the medium itself. Later compositions in the 1940s tend towards violent mechanical objects in response to the Second World War. At times cryptic, eerie, and even humorous, Tanguy’s compositions are utterly defiant to definition and thereby control, opening windows onto the vast freedom of the subconscious, if we but open the door.

Fischer squeezes the gap between concept and reality, jostling our attention across the limbic line of transformation. André Breton, the founder of the Surrealist movement, closed his novel Nadja with an unforgettable sentence: “Beauty will be convulsive or it will not be at all.” (3)