Nicolas Ceccaldi
All I Have are Negative Thoughts, 2020
Oil on board frame
82 x 62 cm 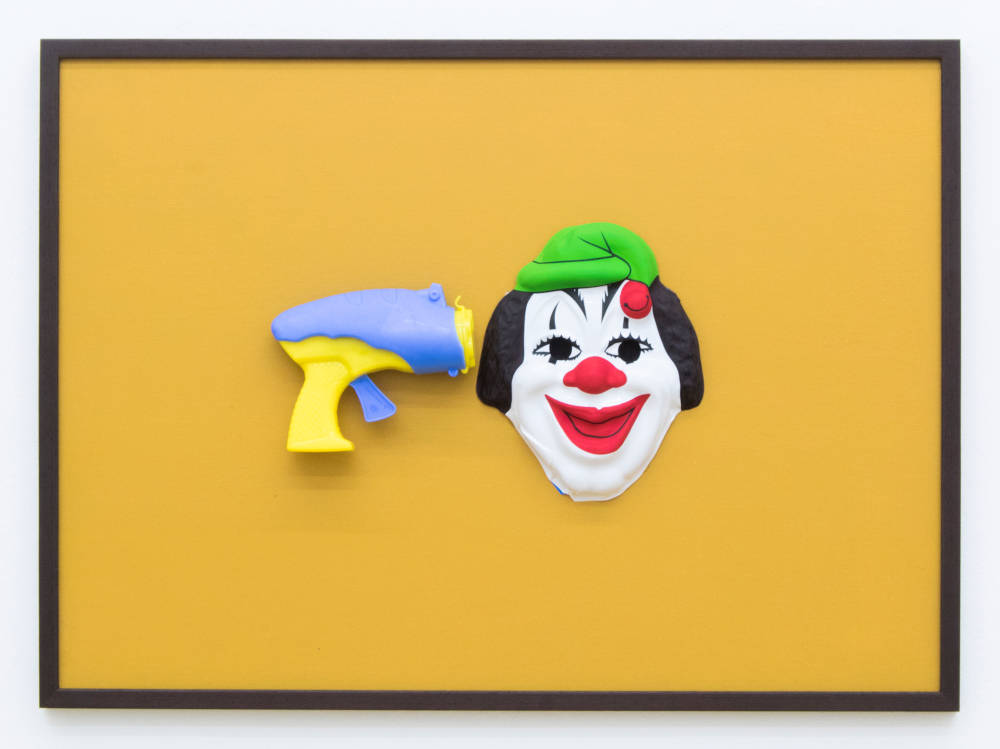 Knock knock is an exhibition by Nicolas Ceccaldi about Joker, a 2019 American psychological thriller film directed and produced by Todd Phillips and starring Joaquin Phoenix. Set in early-1980s Gotham City, the film provides an origin story for Batman’s infamous arch nemesis never seen before on the big screen, following Arthur Fleck (Joaquin Phoenix), a social outcast and aspiring stand-up comedian who lives alone with his mother and who suffers from many mental illnesses including one which causes him to laugh uncontrollably when he is nervous. The film embarks us in Arthur’s descent into insanity and nihilism, inspiring a downward spiral of crime and violence, setting off a revolutionary uprising in the decaying metropolis; a path which brings him face-to-face with his alter-ego: the Joker. Joker is not only a gritty character study, but also a broader cautionary tale. The film and its main character are treated figuratively and metaphorically as subject matter, making the exhibition both an homage and a commentary. Every artwork takes various themes, narrative tropes, or visual elements from the film, and references them either in the form of personal interpretations or direct quotation.
The exhibition title references the opening of a popular joke format (“knock knock – who’s there?”) a variation of which is delivered by Arthur Fleck in his Joker make-up during an awkward appearance on a talk show hosted by Murray Franklin (Robert De Niro), a TV presenter he idolizes. Despite having repeatedly rehearsed this moment in his living room and in his fantasies, Joker’s timing is off and after tediously rummaging through his “joke book”, he finally delivers the opening line “knock knock” prompting the host to quip “and you had to look that up?”
Everything must go is an aluminum copy with added wings of a coroplast sign held by Arthur Fleck outside a shop dressed as a clown-for-hire in the opening scene of the film. A group of youths subsequently steals the sign and break it over his head. His boss not only doesn’t believe his story, but demands Arthur pay for the missing sign: an injustice that confirms Arthur’s impression that the world really is out to get him.
All I Have are Negative Thoughts is an oil portrait of Joaquin Phoenix as Arthur Fleck in a scene in where his social service worker asks him if he ever has any negative thoughts to which he answers “all I have are negative thoughts.”
Make obzervashins about audieense, is the abstract rendition of a clown face, with the foam nose held up by iron wires shaped into the outline of a face. The title is a quote taken from Arthur’s notebook, in a list of things he should be doing in order to succeed as a stand-up comedian. Besides making “observations about [the] audience” he also lists “dressing casual but nice” “making eye contact” or “slick hair.”
Always make funny obzervashins is a title taken from the same list. This piece is a store-bought print modified with cut-and-paste letters to spell out one of the film’s memorable quotes, “I just hope that my death makes more cents than my life.” This pun, authored by the aspiring comedian, is read out loud by Arthur’s visibly concerned social worker as she flips through his notebook.
On his way out of his workplace after being fired, Arthur stops halfway down the stairs beneath a sign that reads “Don’t Forget To Smile.” He then reaches out with a black marker and crosses the words “forget to” only leaving “Don’t Smile.”
Werk The Croud is a “combine-painting” where a clown face is seen smiling while a plastic toy gun is pointed to its head, against a mustard background. The misspelt title is another quote from Arthur’s notes while the piece is an allegory of the concept of tragicomedy, a dramatic genre that blends aspects of tragedy and comedy.
1980s credits displays the Warner Communications logo used in the 1970s and early 1980s, in tune with the film’s 1981 vintage aesthetic. The logo covers an urban landscape meant to represent Gotham, approximating Joker’s opening credits.
Disclaimer is made of a laminated card floating across a dark green background. It is assumed that Arthur carries such a card on him at all time to clarify the situation in case he suddenly bursts into a fit of laughter. The card explains that he suffers from a condition akin to what is known as Pseudobulbar affect (PBA), a type of emotional disturbance characterized by episodes of laughter or crying without an apparent motivating stimulus. Video recordings of such symptoms were studied by Joaquin Phoenix in preparation for his role.