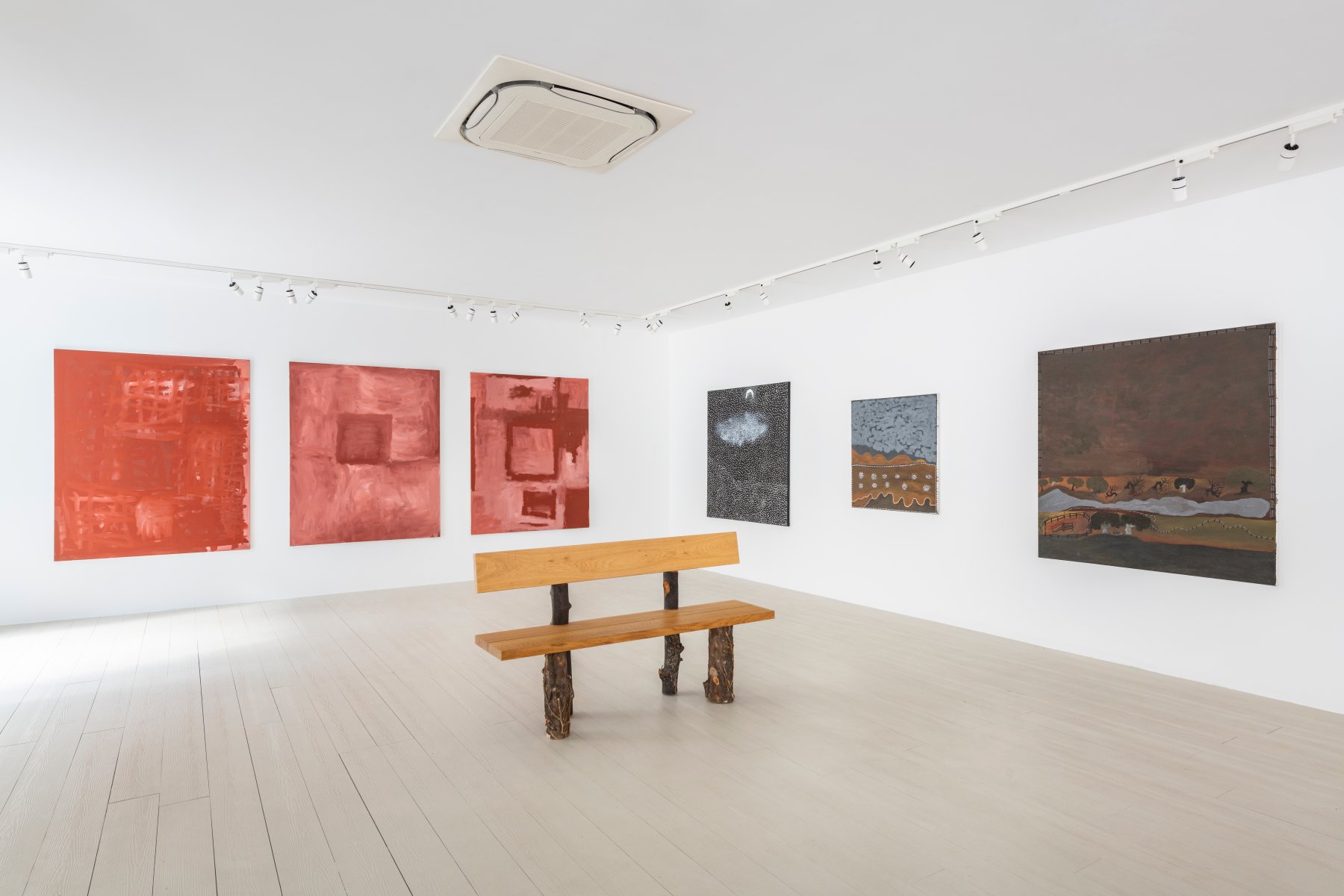 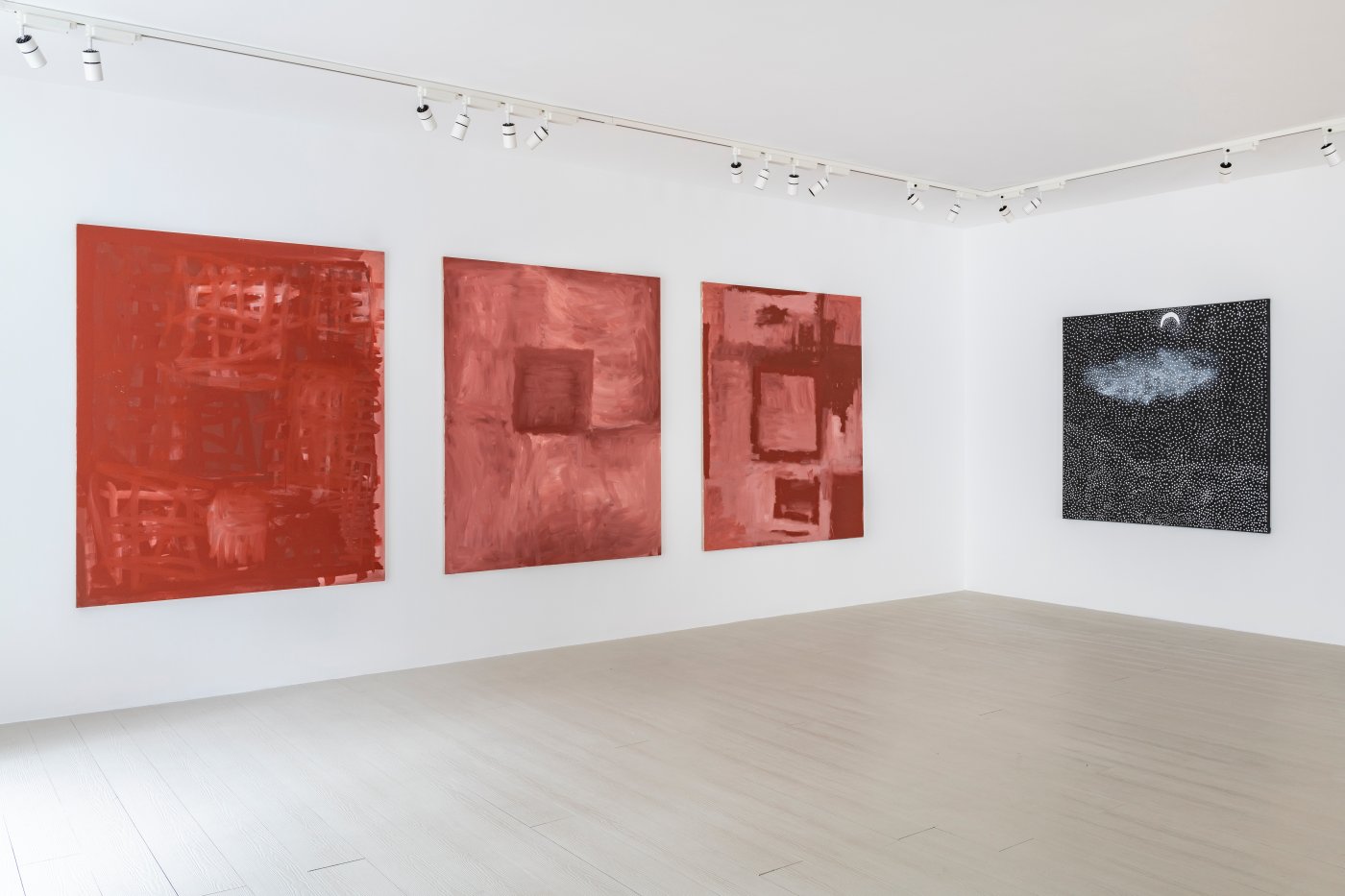 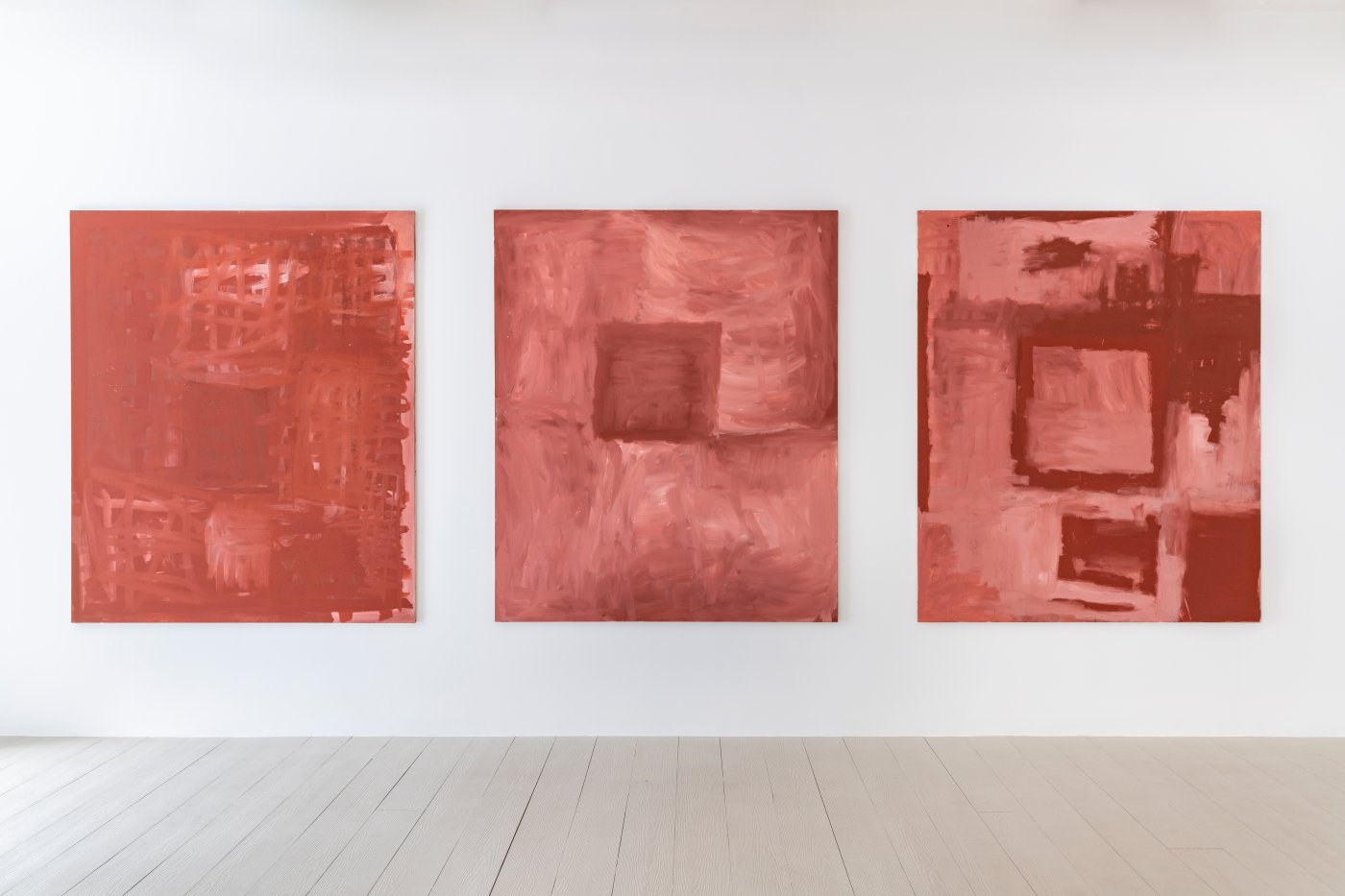 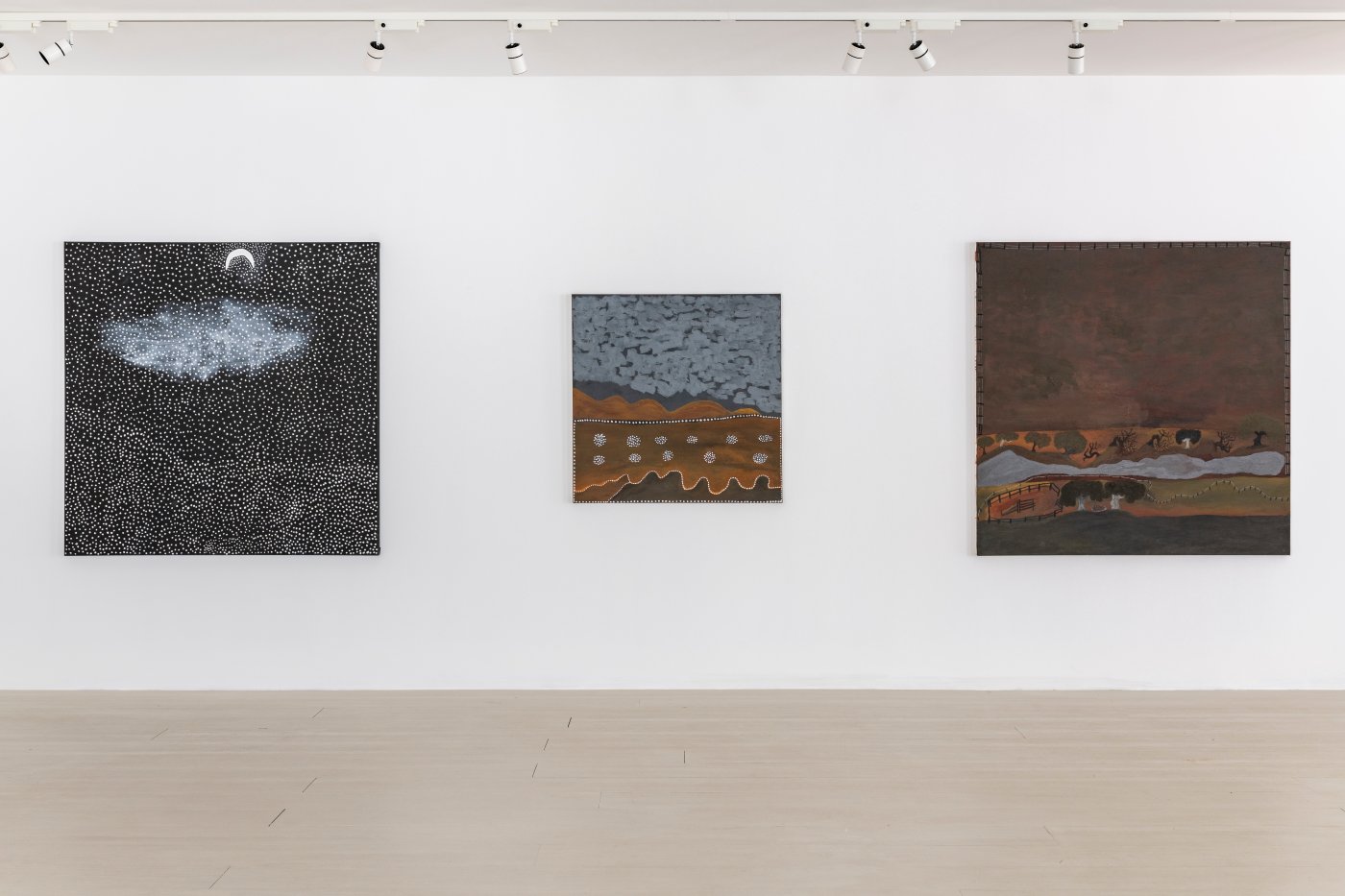 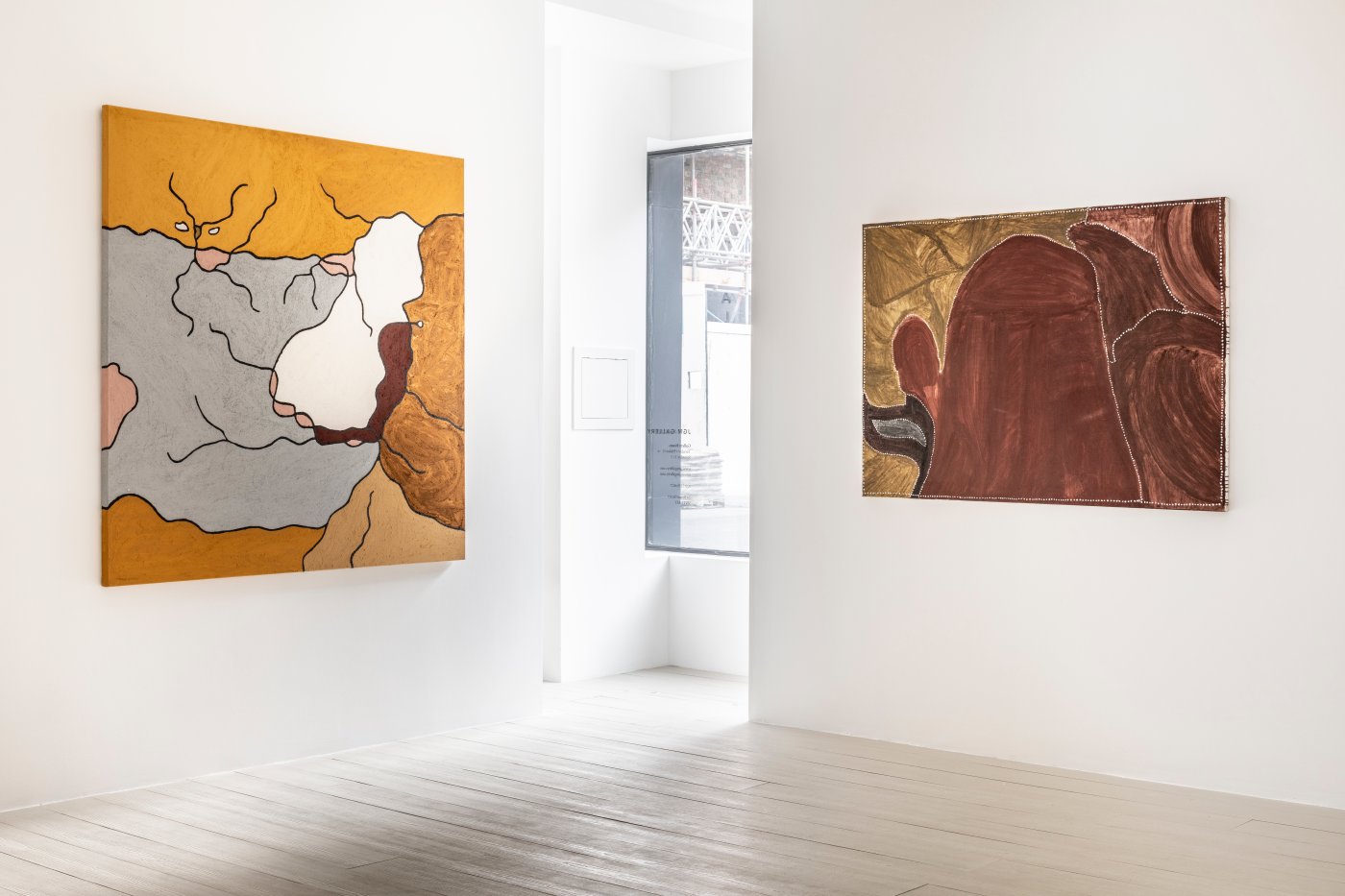 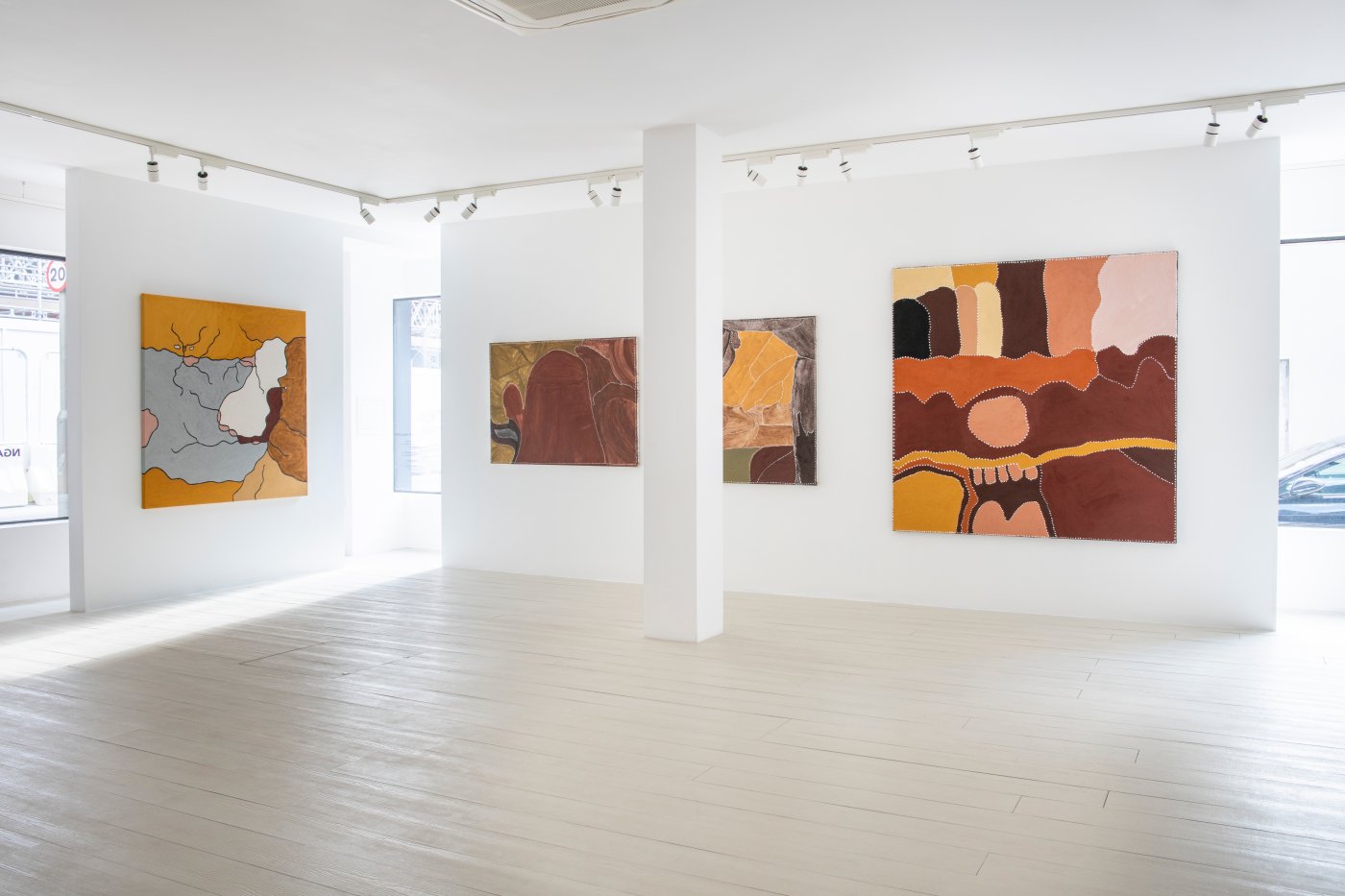 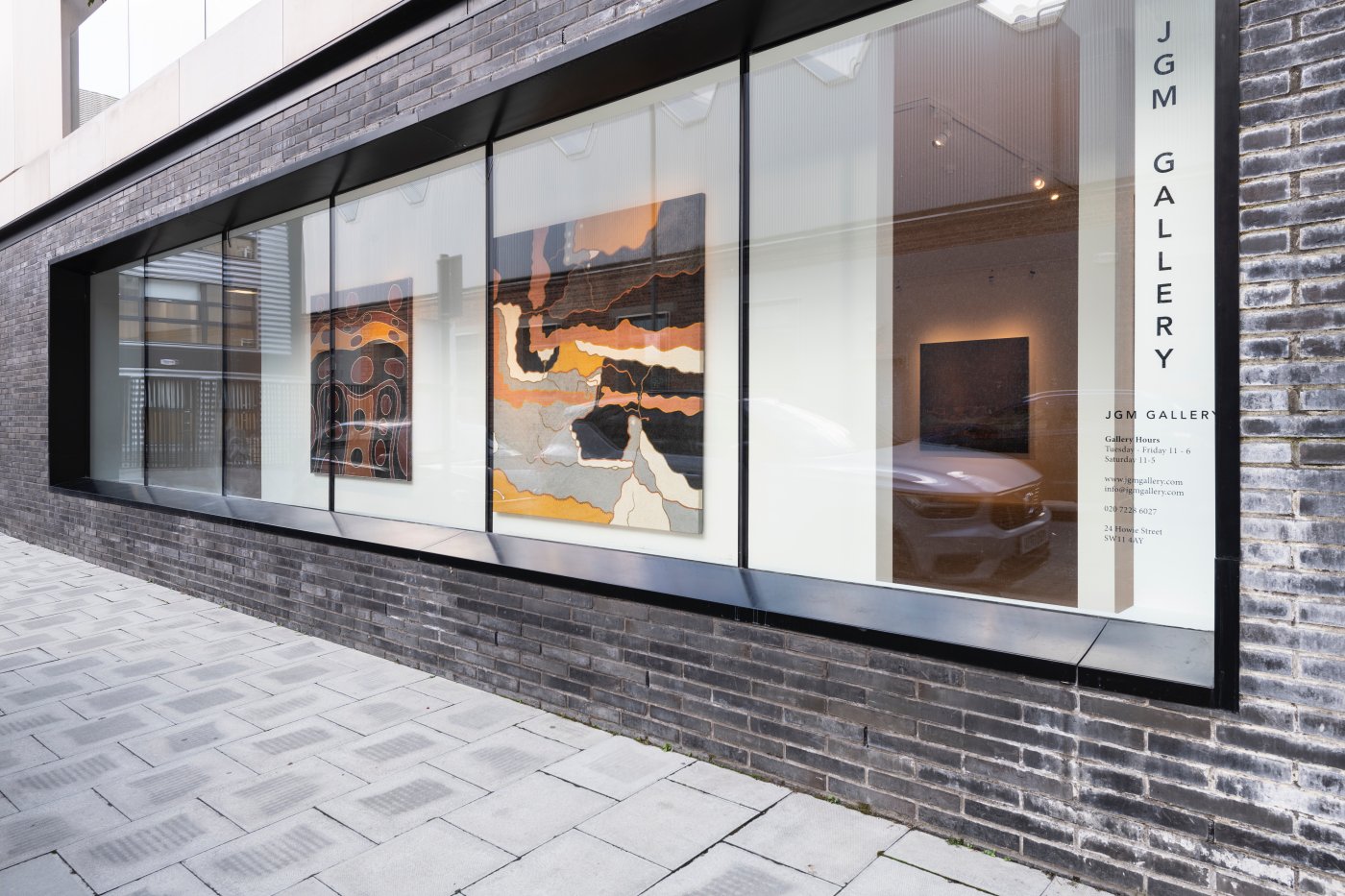 The concept of Ngarranggarni is an expansive and complex one that defies simple definition or translation. It is common to many language groups in the Kimberley region and refers to “The time when the landscape took its present form and the rules for living came into being.”

As well, the Ngarranggarni provides a complex framework that continues to encode, nourish and maintain Gija laws and conceptions of social organisation, trade and exchange, kinship relations and family ties, custodianship of country and the practice of song, dance, spirituality, art, language and philosophy.

The exhibition, Ngarranggarni comprises twenty paintings by senior Gija artists from the Warmun community, located in the north-east Kimberley. The paintings document a continuum of integrity evident in the artist’s storytelling of place and rich cultural traditions that evokes the beauty of remote landscape. Maps of country and powerful images relate to harsh realities and the troubled history of the Gija people, post white British settlement.

CONTEXT OF THE EXHIBITION
Indigenous Australian people have developed a strength and resilience against adversity through tragic experiences of isolation, marginalisation and suffering. The difficulties faced today are not a new phenomenon for Australia’s indigenous people.

There are a number of vital historic, sacred and ceremonial sites for Gija people in the north Kimberley region, many located on original cattle stations – Texas Downs and Bedford Downs Stations – where the station owners relied on Indigenous workers up to the late1960’s for the tough job of droving large herds of cattle thousands of kilometres to markets as well as breaking wild horses for this work. The introduction of equal pay for Aboriginal workers brought an end to cattle station life and thousands of Aboriginal people were tragically displaced.

Significant aboriginal massacre sites have been identified across the Kimberley region. The traumatic nature of these bloody events is evident in the Gija artists’ work for whom these tragedies bear great personal significance, and continue to feature on their canvases. The paintings enable important cultural stories to live on, reminding and informing Australians of this part of their national history.

DESTRUCTION OF CULTURAL SITES
In June 2020, Kimberley Granite Holdings had been mining within the Malarngowem Native Title Area without even the licence given to the Rio Tinto company to blow up caves in the Pilbara. The diabolical blasting of sacred lands and caves has come as a new tradegy to the Gija people. The destruction of culturally significant sites at Jawaren by Kimberley Granite Holdings (KGH) was a desecration in Gija law and in clear breach of the Aboriginal Heritage Act 1972. This company has broken government law and Gija law and will be held to account. We will share information on ways to support the protection of this sacred land through our gallery website.

The sacred site in Western Australia that showed 46,000 years of continual occupation and provided a 4,000-year-old genetic link to present-day occupants. Most precious was a 4,000-year-old length of plaited human hair, woven together from strands from the heads of several different people, which DNA testing revealed were the direct ancestors of Puutu Kunti Kurrama and Pinikura traditional owners living today.

Rusty Peters’s response was, “This makes me very worried as I have to give permission for such things to happen on Darrajayn country. I’m not going to stop worrying, white people cutting our culture up”.

Despite shocking events both past and present, the resilient Gija people have sustained practices and beliefs passed down from their ancestors and embedded in their country, for more than 60,000 years in an unbroken society. ‘Country’ is inseparable from identity as people, and their contemporary works are expressions of aboriginal traditions and beliefs, and demonstrate the Gija’s determination for cultural maintenance and a driving passion to pass cultural beliefs to future generations.

PRESERVING THE TRADITIONAL SITES OF NGARRANGGARNI
The black granite sought by KGH is found within an area with layers of significance for Gija traditional owners in connection to two key Ngarranggarni (Dreaming) stories for Gija people; Garnkiny, the Moon Man and Goorlabal the Snake. As well as Dreaming sites and tracks there are places of familial and Garnkiny is what Rusty Peters describes as ‘a big story’. He means both that it covers a vast area of his country and that it concerns the most serious tenets of Gija law.

The story is about a man who fell in love with a woman who was his mother-in-law within Gija kinship. When the elders refused to allow him his love, he cursed them and condemned humankind to mortality. This man comes back as the new moon every month, but we die and our bodies return to the earth. His love became the black headed snake and the stars are his promised wives. The story carries meanings about the most primary aspects of human experience and Gija law; death and mortality, love and desire, kinship and obligation.

It is because of its significance to this story that the site was listed under the Aboriginal Heritage Act. Goorlabal the serpent is also a powerful Dreaming figure and holder of Law for all Gija people. The black granite removed by KGH is part of her tail. Her gargantuan body lies as stone stretching across a large expanse of country, part of which is within the area destroyed by the recent explosions and extractions.

As well as Ngarranggarni stories, this part of their country holds familial significance for Mabel Juli and Rusty Peters and other traditional owners. Close to the destroyed site are their family’s burial places and sites of memory that have already been disturbed and any further mining or exploration in the area would be unacceptable, distressing and dangerous.

ABOUT THE ARTISTS + WARMUN ART CENTRE

The Gija artists from the Warmun community paint their country using only natural earth ochres from their
land. Each canvas is painted using hand-collected and crushed natural pigments in a luscious array of earth tones. Artworks from the Warmun community draw on traditional Ngarranggarni stories (Dreaming) as well as contemporary experience, helping maintain cultural connections to country and keeping stories alive in a rapidly changing environment. Gija Country covers a vast area in the spectacular East Kimberley region, an awe- inspiring landscape most familiar to Australian and International travellers for the Bungle Bungle Range (now
called Purnululu National Park), Cambridge Gulf and man-made Lake Argyle.

Warmun Art Centre is owned and governed by Gija people with 100% of income returning to the community. The centre was established in 1998 by the late founding members of the contemporary painting movement in Warmun such as Rover Thomas, Queenie McKenzie, Madigan Thomas and Hector Jandany. These elders recognised and responded to the need for a support, maintain and promote Gija art, language and culture.

Courtesy of the artists and JGM Gallery, London