Born in São Paulo, Igor Vidor (*1985) has settled in Rio de Janeiro in 2012, where he produced, in the past few years, a large body of work informed by his research on urban violence, gun cultures and social inequality. Working across different media, such as video, sculpture and installation, the artist’s pieces include objects such as handmade gun toys and bullet shells, collected in economically dispossessed territories.

After the repercussion of his solo show in São Paulo, in 2018, Vidor became the target of death threats by members of a militia group in a moment of political polarization, marked by the censorship and persecution of the arts in Brazil, led by the rising right. His move to Germany, then, was one of self-exile, taking place a few months following the election for presidente During the period of his residency in Berlin, Vidor’s research process includes visits to the arms manufacturing companies which have been sold weapons to Latin America since the 19th century, and studio experiments with materials used to produce bulletproof equipment and projectiles, such as aramid fiber and lead, which he incorporated in his new works.“ (excerpts extracted from Chimeric Compositions, text by Yudi Rafael Igor Vidor studied at the Centro Universitário Belas Artes in São Paulo. He worked several years in the field of education and mediation at the Museu de Arte do Rio (MAR). His work has been shown in several international exhibitions, including Künstlerhaus Bethanien (2020); Pérez Art Museum Miami (2018); Mercosul Biennial (2018); Sesc 24 de Maio, São Paulo (2017); Museu Histórico Nacional, Rio de Janeiro (2017) and Museu de Arte do Rio (MAR) (2016). Since 2019 Igor Vidor lives in Berlin and is artist-in-residency at Künstlerhaus Bethanien. Unfortunately, his exhibition Berlinische Galerie – Museum for Contemporary Art which was supposed to open in November was postponed due to the current regulations at Berlin. 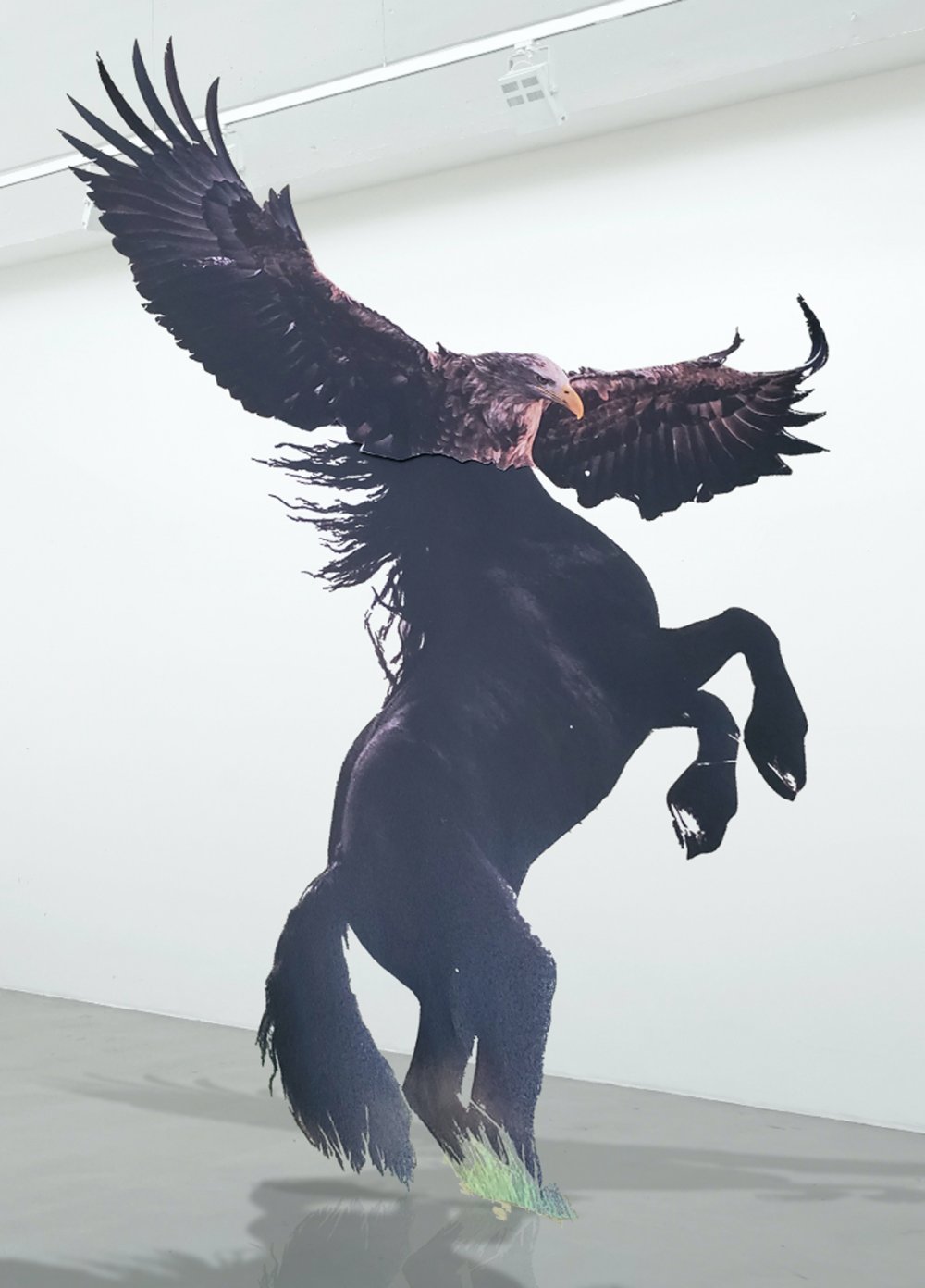 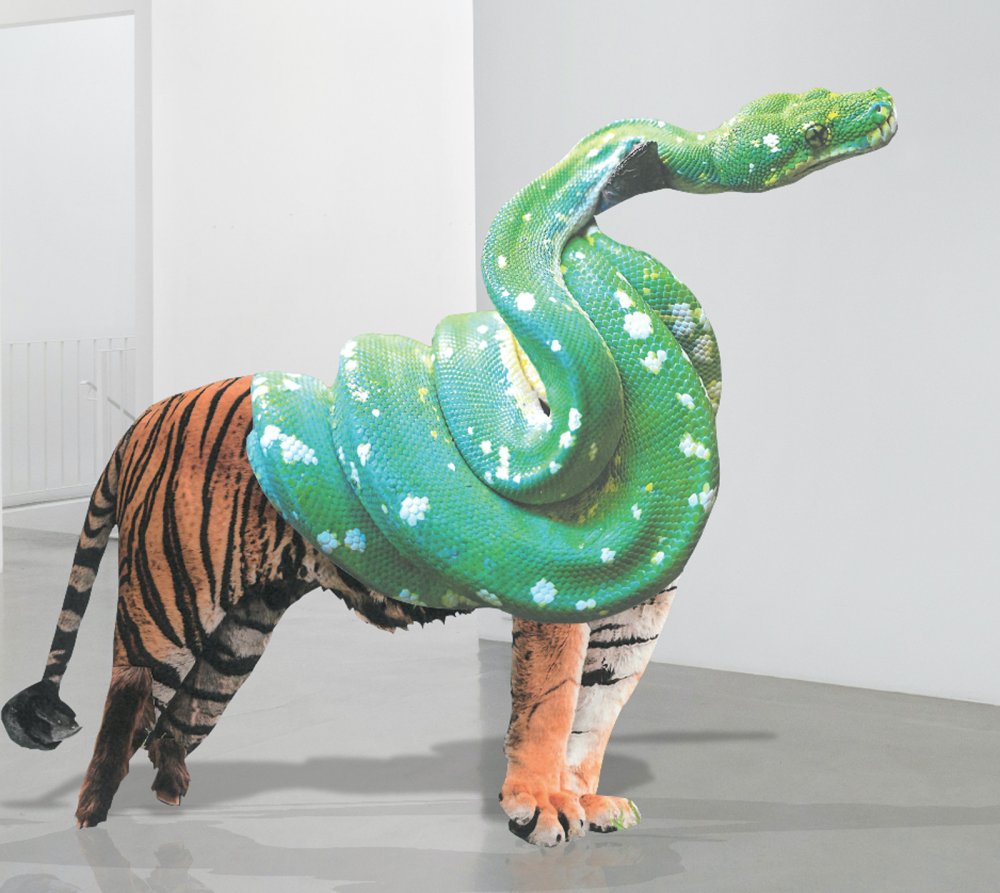 When we consider notions of public security in Brazil, the practices carried out by the police violate rights often. The same practices carry an allegorical aspect in the demonstration of strength and power. From the survey of hundreds of shields and emblems of the military and civil police in Brazil, I found that for the most part, those emblems carry animal images. Despite poor aesthetics, it is certainly a heritage of heraldry, practiced since the Portuguese empire. Taking into account the presence of the animal figure, I think that unlike indigenous people, where we see animals of power intrinsic to their cosmology and spiritual connection, the representation of the images of these animals by the police force compared with their practice tells me about the distancing of certain humanity. I prefer to think that it is actually the representation of its institutionalized bestiality. Collecting a set of images of the animal species found on the emblem, I use collages to create genetically unlikely compositions. Beasts arise from the mixture of body parts of these figures. The next step is to enlarge these images and reprinted them on aramid which is a bulletproof fabric. Despite the three-dimensional aspect of work in occupying space, they gain a volume-depleted character. Planarity that I believe reaffirm allegorical rhetoric, but now literally bestial in its representation. 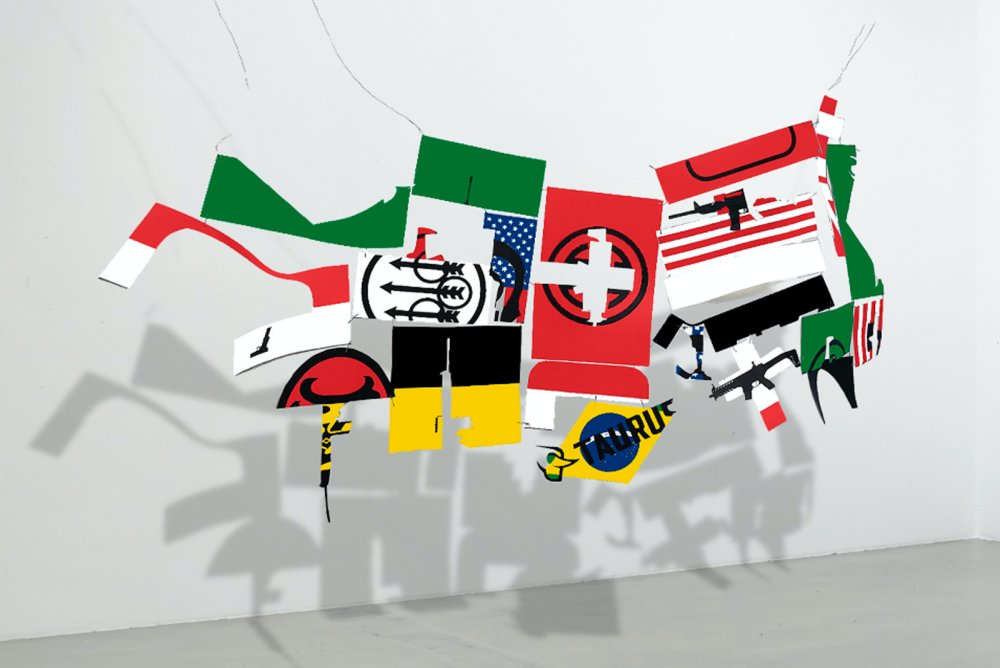 It is well known how death is a profitable business in Latin America.
Through logos of armaments companies and the silhouettes of their respective weapons applied on the flags of the manufacturing countries, the work draws attention to the continuous mass production of firearms, as well as the constant fluctuation of the dollar related to smuggling. The work points to the situation which links gun trafficking to a much larger international network.

The balloon was extracted from one of the first editions of the Batman comics. The excerpt briefly presents the previous moment when the millionaire heir found the solution to „fight“ criminals. I believe that the quick discovery of the character translates into a shallow idea of good and evil and establishes itself as a canon in popular violence practiced. Even the millionaire hero becomes an outlaw and so far Gothan city remains the same after almost 80 years of the first edition. If the hero’s entire mythology describes the traumas that make him a vigilante hero, we should also ask ourselves what makes someone become a „villain“? This same dichotomy imposed by vigilantism finds an echo in practices of violence by the population and the police in Brazil. 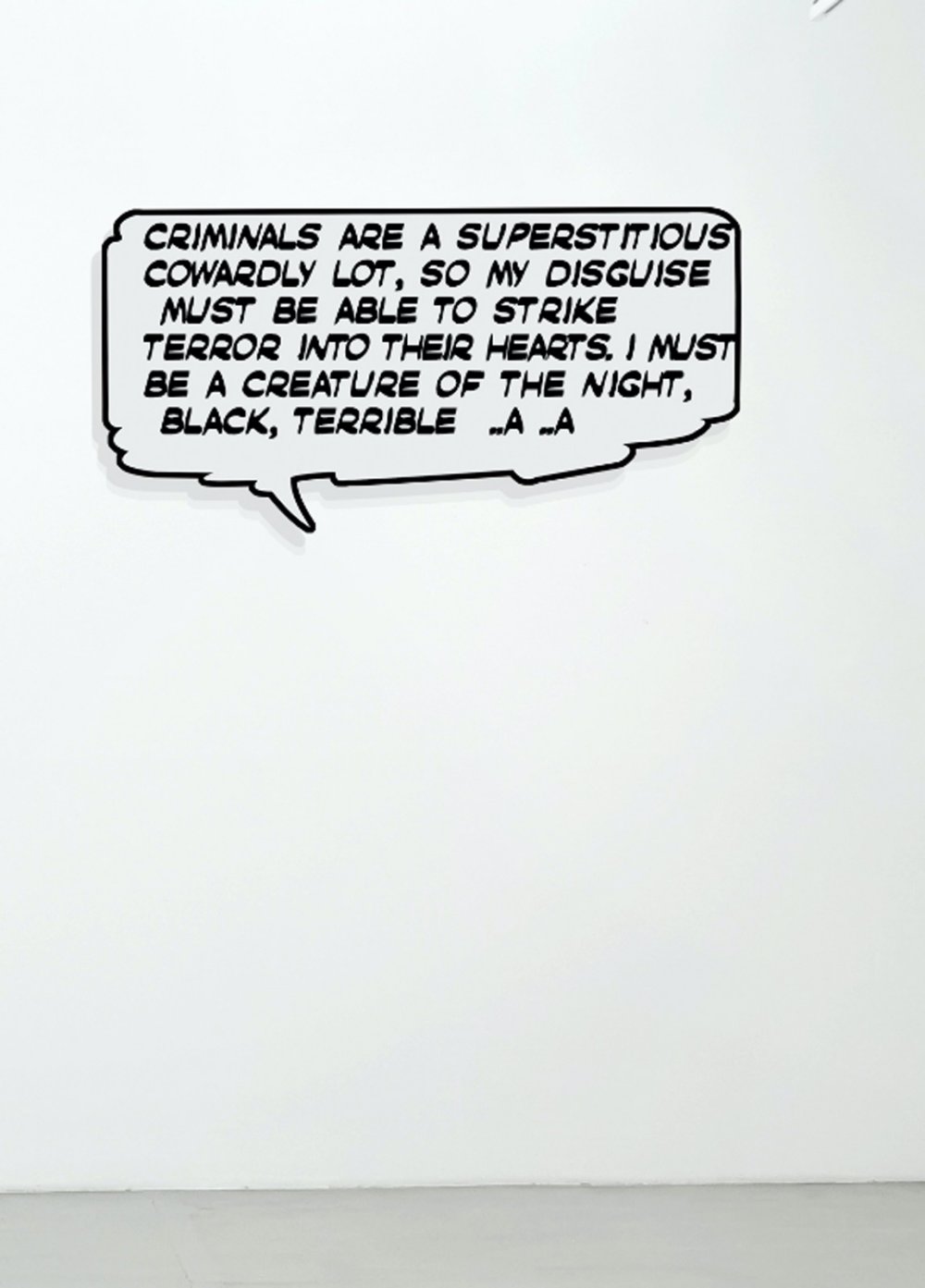 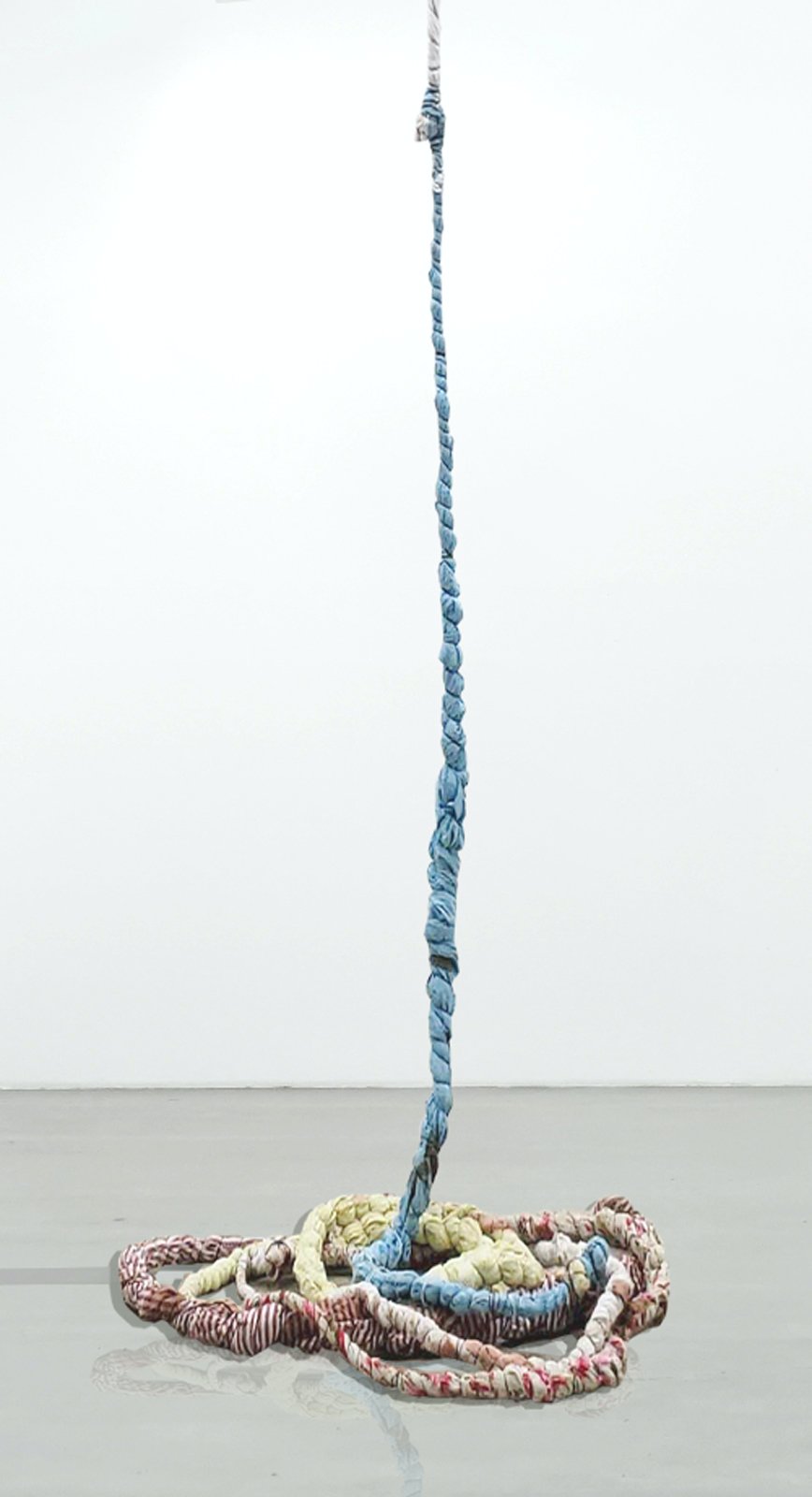 Teresa and the Moira is the name I give to a rope of twisted sheets intertwined with a leaden thread (same material of the bullets). The sheets used at work carry bloodstains on the surface. They were used by people of areas where armed conflict is common to cover bodies of people murdered and left on the streets. In slang, it is called “Teresa”, a rope formed by twisted sheets, hanging from the prison window, where prisoners escape to freedom.
The work’s title alludes to the Christian myth of Saint Theresa and St. John of the Cross and the figure of the weaver sisters, the Moiras, responsible for weaving the thread of life, an allegory of destiny. In Teresa and Moira, the emphasis on the inflection of materials operates approximations of seemingly disparate things to each other. In the heat of metaphors, I think the functionality of work associated with the specificity of materials puts us in the face of a paradox.
The intertwining between the idea of destiny, escape, and freedom.