Barakat Contemporary presents international installation artist Nevin Aladağ’s very first exhibition Motion lines in Korea. The “motion lines” in the exhibition title are used in animation to represent the movements of characters and objects; they serve to express sounds, emotions, and motions and to connect movements in sequence. 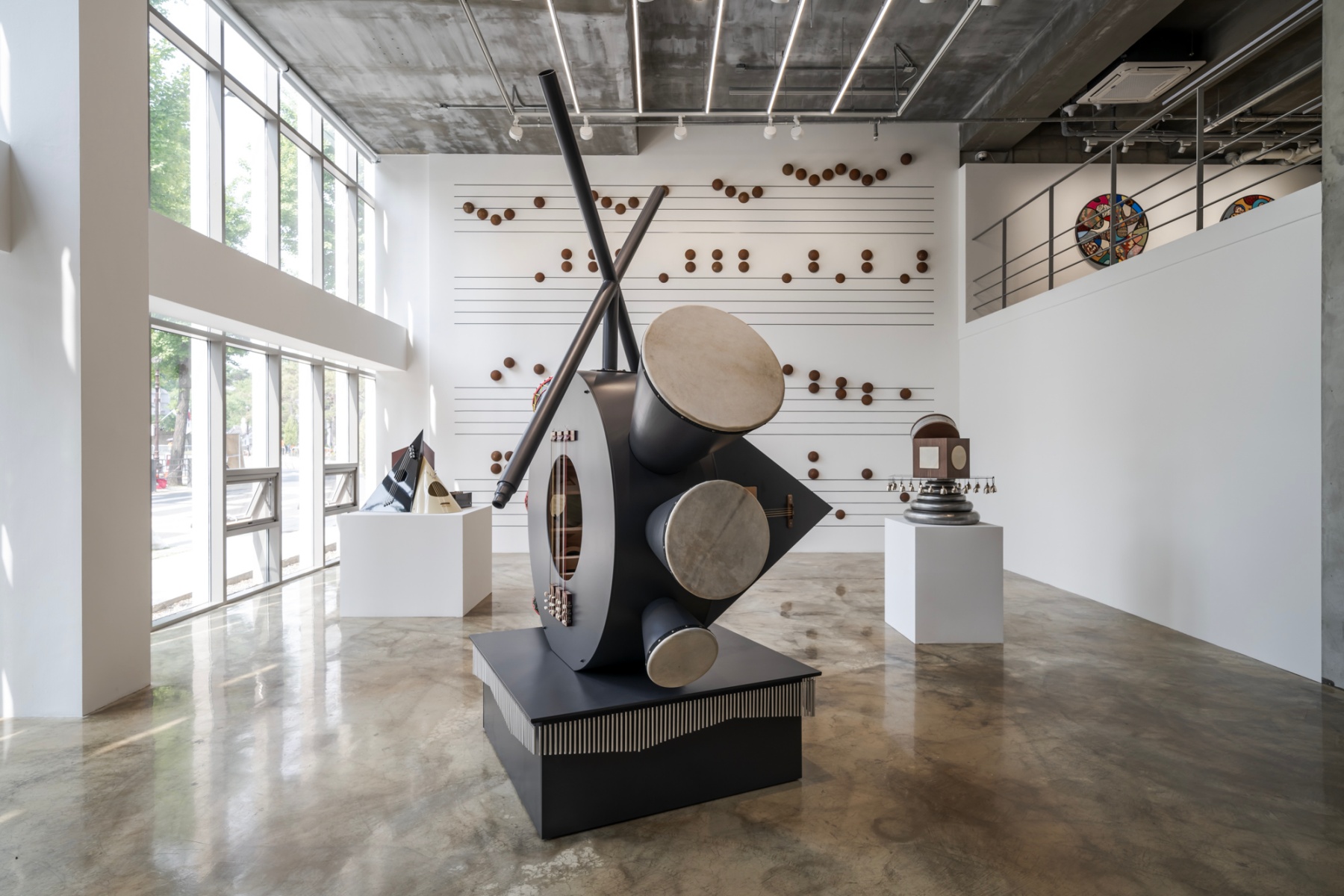 Describing her artistic work, Aladağ says, “Motion is a state of progression from one place to another. A line or many lines can define limitations or create new patterns and places. This compound word [motion lines] is describing a vibrant image in which music, form and movement are all combined.”

A native of Turkey, Nevin Aladağ moved to Germany at a young age. Since the late 1990s, she has looked toward everything from everyday objects and language to architectural styles and urban and natural landscapes as material for her work, exploring the possibilities of sound as she experiments with various media including, installation, sculpture, video, and performance. The work provokes audiovisual experiences in the viewer while primarily reexamining different structural issues that emerge within capitalist systems, including those related to cultural identity, conventions, and class. She also uncovers the fictive potentiality inherent to sounds, presenting a new framework for perception as she breaks down real-world boundaries through new language, allusive displacement, and transformation of metaphor.

Spread out in enlarged form along the gallery’s walls is the final movement of Rondo alla Turca, also known as Mozart’s Piano Sonata No. 11 in A Major. This is Aladağ’s installation work Marsch(Basel) (2014). To transform Mozart’s Rondo score into a large-scale installation, the artist made 94 rusted bronze casts of 19th-century cannonballs from the Basel Historical Museum. As the musical notes are replaced with the hemispheres of cannonballs installed on the white gallery wall like one large musical score, Marsch(Basel) is an opportunity to physically experience Mozart’s beautiful melody, yet one that also uses a powerful visual and auditory sense to convey the devastating reality of war symbolized by the cannonballs.

As this work represents the intersection between political and military clashes and the cultural milieu under the influence of armed conflict, Aladağ expresses the infinite possibilities of music, conveying how music and instruments have been performed across boundaries of countries and peoples even during the times of war. By metaphorically exposing the cultural hegemony intertwined with the political and cultural context of Rondo’s composition, she seeks to expand the multilayered context within the object and forge possibilities for a new narrative. The staff on the white wall and the notes embedded in its lines will transform for some people into the horrors of war; for others, they will convey the excitement of rhythm or a sensory experience of the matter.

Standing across from Marsch are Aladağ’s Resonator (2018), Resonator Strings (2019), and Resonator Percussion (2019). These are assemblage sculptures combining geometric shapes such as straight lines, diagonals, circles, triangles, and squares, but they are also instruments produced by the artist in collaboration with specialists in instrument- making. Resonator, for example, is a combination of string and percussion instruments, including the harp, mandolin, acoustic and bass guitars, didgeridoo, and chimes; depending on the performer, it is capable of producing assorted sounds. Resonator Strings was similarly produced with bass guitar, cello, and zither strings, an amplifier, and various pieces of machinery, while Resonator Percussion has small bells, leather, and bronze put together to create a surface and soundbox that can be plucked or pounded. With its production and amplification of sounds, the Resonator series becomes a physical setting for sharing the history of sound through instruments that combine objects created by diverse cultural spheres in order to produce sounds transcending space and time. With the metamorphosis of sculpture into instruments, the exhibition setting itself undergoes a spatial transformation into a musical hall. In this way, the works in Aladağ’s series gain the multilayered identity of “sculpture-instruments” through their physical contact with the performers, investigating new sounds and movements of objects/bodies through their exploration of and reaction to the space in which they are present.

The three-channel video work Session (2013), which focuses on the movements and sounds created by objects, was produced by the artist as a part of the invitation of the 2013 Sharjah Biennial. As she was conceiving a work that would use sound to explore the city and its elements, Aladağ observed how much of the economic workforce and cultural heritage in that society rested on the foundation of Pakistani, Indian, Iraqi, and African migrant communities. The instruments in the video are all the traditional instruments of those migrants’ respective cultures, appearing there as social entities representing the city. The bells traveling over the waves recall the lives of political refugees forced to risk their lives crossing the ocean; the sound of a darbuka (goblet drum) played by droplets falling from the sprinkler in a luxury hotel lawn, the juxtaposition of drumming with a tambourine dragging over desolate desert sands, and the plaintive image of instruments sitting by the side of a road allude symbolically to the identity and vulnerable reality of migrants who do not have any place where they “belong.” The instruments produce movements and sounds as they travel through the city, and in the process they represent the difficult lives of political refugees and workers set adrift, transplanted and displaced. A poetic examination of cultural identity as symbolized by instruments and sound, Session also exemplifies Aladağ’s ongoing explorations of the infinite artistic possibilities of the sounds realized by objects and landscapes.

After Session comes Traces (2015), which is set against the backdrop of Stuttgart, the city where the artist spent her childhood. Also a three-channel video work, it shows the events taking place at three different locations, which overlap with different sounds. Next to a park where a pair of triangles dangle from a tree, tinkling as the wind blows, we see a scene where a violin hangs from a playground’s revolving stage, while a bow fixed to the ground produces a delicate melody each time the stage revolves. At the same time, we also see the backdrop of the main city street where a red rocking horse plays a tambourine while moving back and forth. In the next scene, the camera angle quietly follows the movements of a yellow balloon against an azure sky, with the muffled sound of a drum striking the ground as it spiritedly races through a park. The camera then captures a flute dangling from the balloon, letting out a high-pitched sound as it floats up and down. The colors and shapes of objects in different times and spaces that Traces presents create different sounds and movements amid natural phenomena such as gravity, wind, and air. Where Session emphasizes the specific context of Sharjah as a city, Traces assigns greater prominence to the relationship between image and sound. The moving images in Traces recall the pictorial composition like Composition VIII (1923) by Wassily Kandinsky, a modernist Utopian who sought to devise a new artistic form. Aladağ’s video is not a world that distills the essence of objects or seeks to transcend them; it is a world in which the objects themselves create abstractions. Human beings here are part of the landscape, quietly relegated to the periphery.

Installed on the wall of the second floor of the exhibition hall – Aladağ’s series of Social Fabric (2022), Jali (2020/2022), and Pattern Kinship (2022) reference and combine architectural styles, traditional patterns, and animal footprints from different cultural origins across geographical boundaries. Through a collage approach using different materials such as fabric, ceramics, and aluminum, the work experiments with transformation and the sense of “belonging.” The artist’s works are also structures in which fragmentary elements come together through her choices to imitate a whole; though they are elaborately connected in technical terms, there are still cracks that exist in conceptual ones, and in that sense they predict the infinite possibilities of fiction. Among these different possibilities, Aladağ’s body of work forms a sociocultural narrative that “addresses peoples and cultures of diaspora, which is an important and in fact crucial aspect of a contemporary identity that thrives on diversity, that is placeless and that has to be considered against the old notions of roots, origins, belonging.” Aladağ further encourages the synesthetic experience of her work by giving it subtitles that convey a sense of poetic rhythm based on repetition (Round and Round), combine words with a sense of movement (High and Low), or personify seasonal changes (Forest Follows the Spring or Fall). She is building a world of abstract sounds and images by creating a relationship of tension between her linguistic experiments and purely aesthetic elements of color and shape. In the process, she encourages the viewer to focus not only on her work’s external context, but also on its internal elements.

Motion Lines spurs us to imagine unseen movements and sounds. As can be seen in the exhibition, Aladağ’s body of work attains deeper dimensions as it continues to reveal the cracks and gaps that arise amid gradual variations on similar themes and media. Like a fugue, her past and present works become varied and amplified through their mutual referencing as they move freely across physical boundaries. In an interview, the artist said, “Even though many societies dictate a hierarchy, I always refused it and maybe with my works of art I sometimes try to find new ways of communicating shifting perceptions by decontextualizing and reformulating objects, music and language.” Deconstructing the countless boundaries and names that human beings have created to date—from national borders and racial, national, social, and cultural identities to the functions of objects—her work tells us that fixed identity is merely something that we perceive because of the many boundaries and differences created by social systems. As she endlessly traces and transforms these unseen perceptions, she forms an abstract world that is all her own. Within that, we will be able to imagine and sense the world that Nevin Aladağ presents: one of “vivid images combining music, shape, and movement.”