Rosenfeld porcini presents the second solo exhibition at the gallery by Nigerian artist Ndidi Emefiele (*1987). Gravitating around theatrical mixed media large-scale compositions, Pets, Parties and a Cuddle also features a number of mid-size portraits and a selection of works on paper. 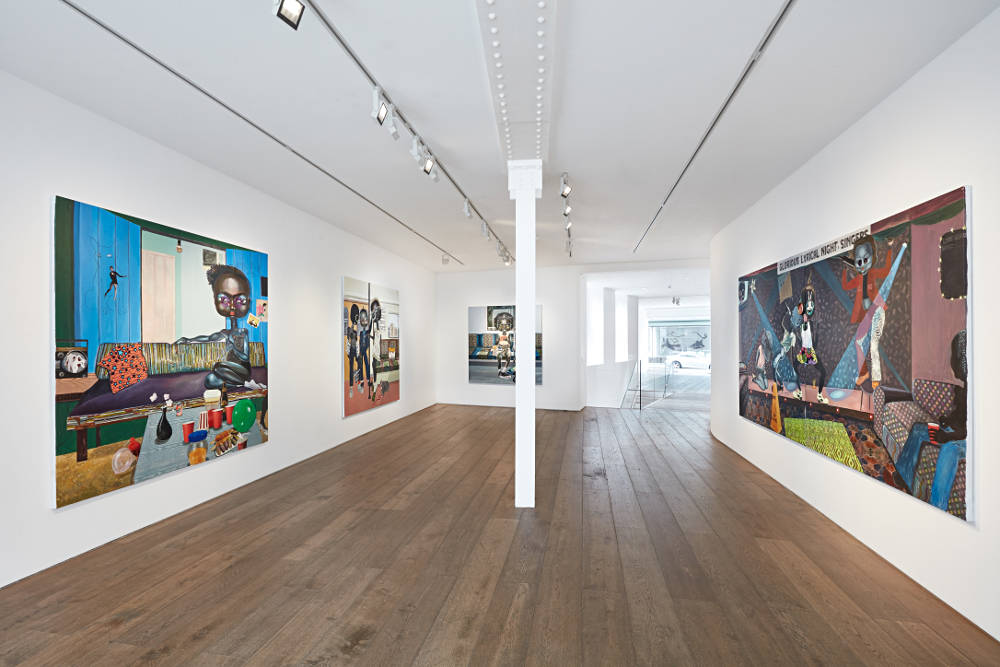 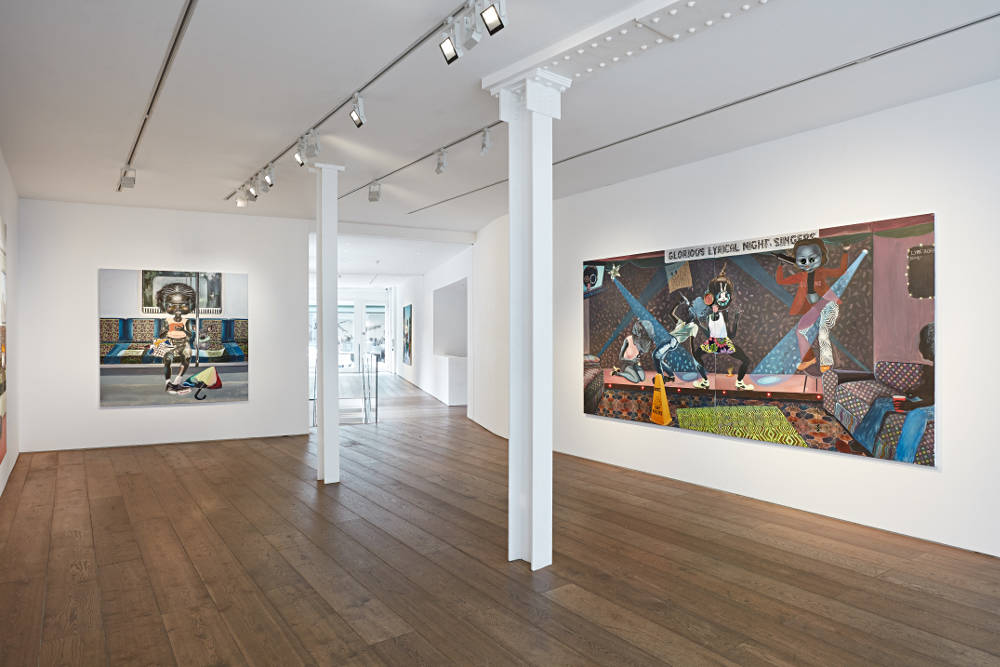 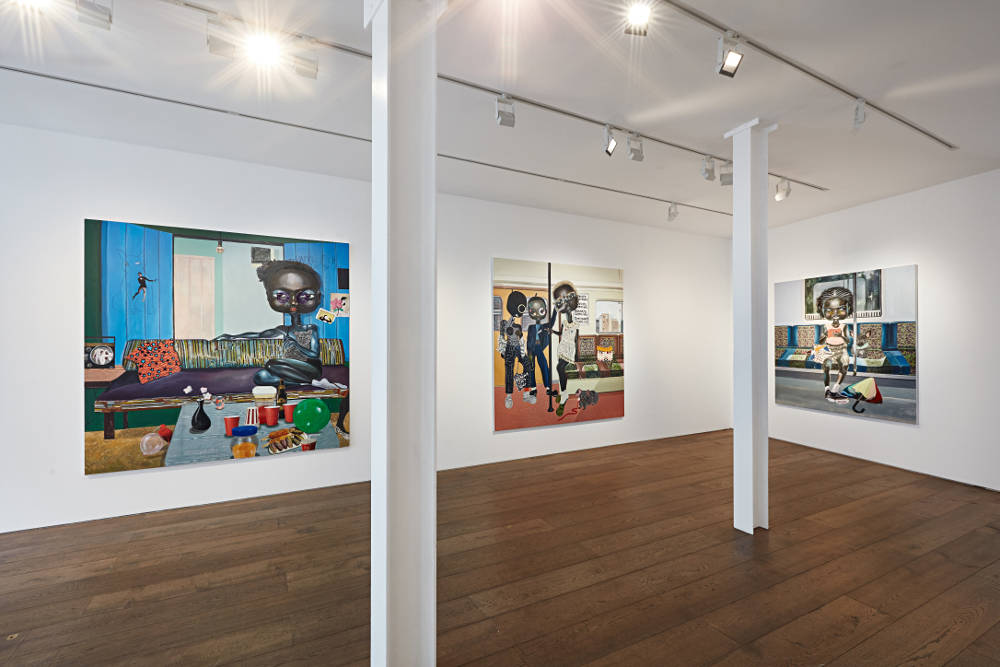 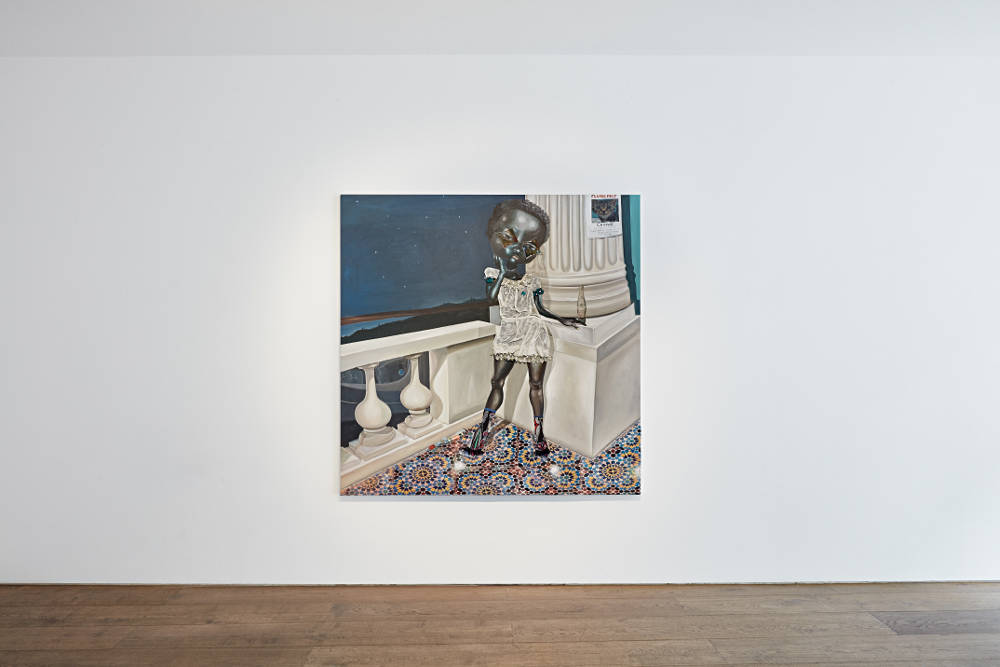 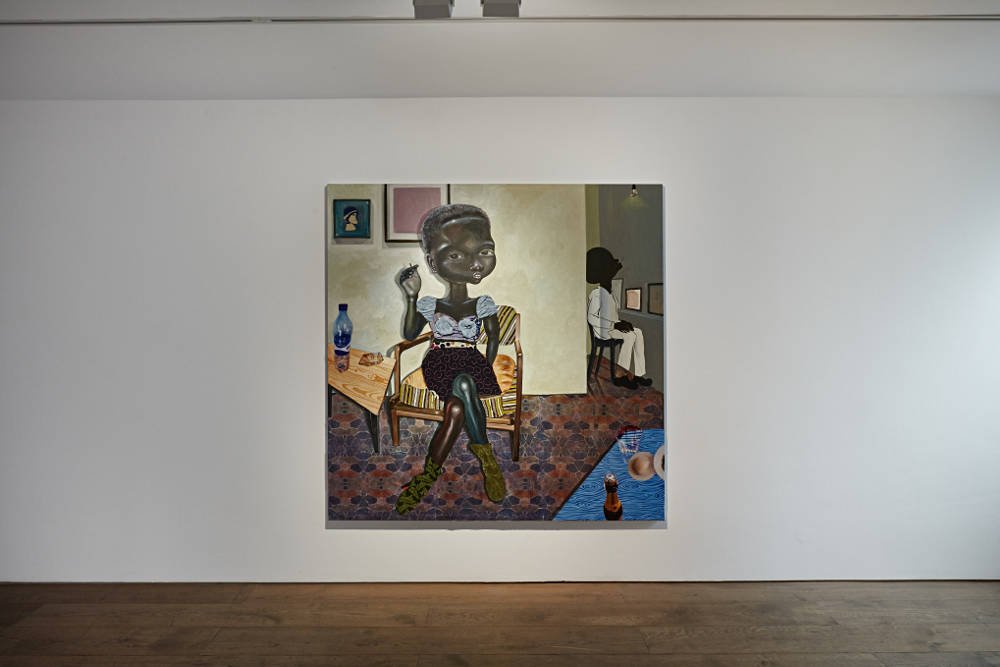 Drawing on her rich visual lexicon, Emefiele’s new body of works further challenges the historically held vision of women as figures of beauty encapsulating a standardized male desire. Young, fiercely proud, self-assured female characters are the sole protagonists of her compositions. Their unconcerned postures reveal an aversion to conventional conformism and their demeanors and outfits in no way are attempting to lure the male gaze, rather embodying an expression of a purely female necessity.

Through the depiction of exaggerated heads said to predict one’s destiny and the recurring use of extravagant glasses, often in the form of CD’s, which illustrates the women’s quest for protection, Emefiele combines popular superstitions and inner weaknesses. As collaged elements and textiles traditionally regarded as symbols of pride and motherhood weave in and out of painting lending the compositions a tactile quality, Emefiele conjures up an original amalgam of contemporary-culture references and Nigerian traditional aesthetics.

If recurring formal elements such as the bold, vibrant use of colour signal the continuity between Pets, Parties and a Cuddle and her previous solo – Loud -, the emphasis on the cinematic array of details and on the juxtapositions of design both in clothing and interiors denotes an increasing complexity and ambition.

On a narrative level, works like Cuddle Cat and Untitled (Dancing to wo!!) further explore the artist’s predilection for domestic intimate settings, whereas in Somebody’s Commute her taste in fashion shines through as the three stylish characters appear wittily as if emerging from a modelling shoot notwithstanding their obvious commuting to work routine.

A tribute to Baroque legacy, with Search Party Emefiele deliberately quotes a series of paintings that Van Dyck realized in Genova portraying an elegant and eminent woman against a classical veranda. Expression of her typical ingenious recourse to body language and acute visual references, the sexy subject wearing a frilly dress and the collaged coke bottle offset the canons suggested by the greek/roman column.

Emefiele’s work speaks a universal language. This ‘democracy’ is one of her most unique strengths, yet beneath the apparent playfulness lurks a great seriousness of intent.

‘I use my works to change how the female surveys herself by not conforming to societal standards or expectations, the carefree female who wouldn’t give a damn!’ (Ndidi Emefiele).

Courtesy of the artist and rosenfeld porcini, London