Ndidi Emefiele: Here as in Heaven

Ndidi Emefiele: Here as in Heaven

Gallery Rosenfeld presents ‘Here as in Heaven’, the third solo exhibition by the Nigerian artist Ndidi Emefiele. The artist’s latest body of works represents a major shift in her output. Previously, her paintings were suffused with humour notwithstanding the very serious underlying theme relating to women’s strength and absolute self-sufficiency and the stark contrast to how society has generally viewed them. 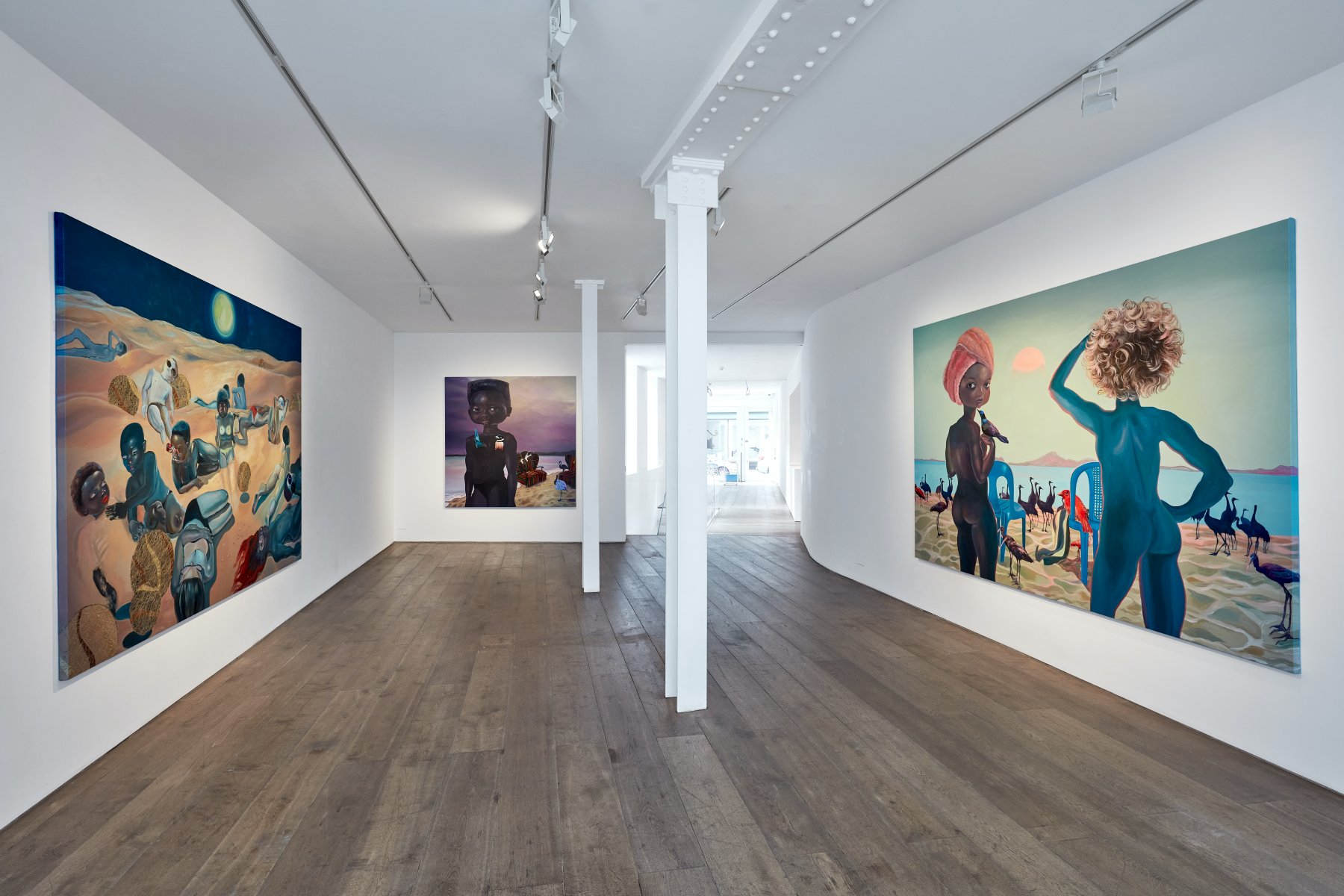 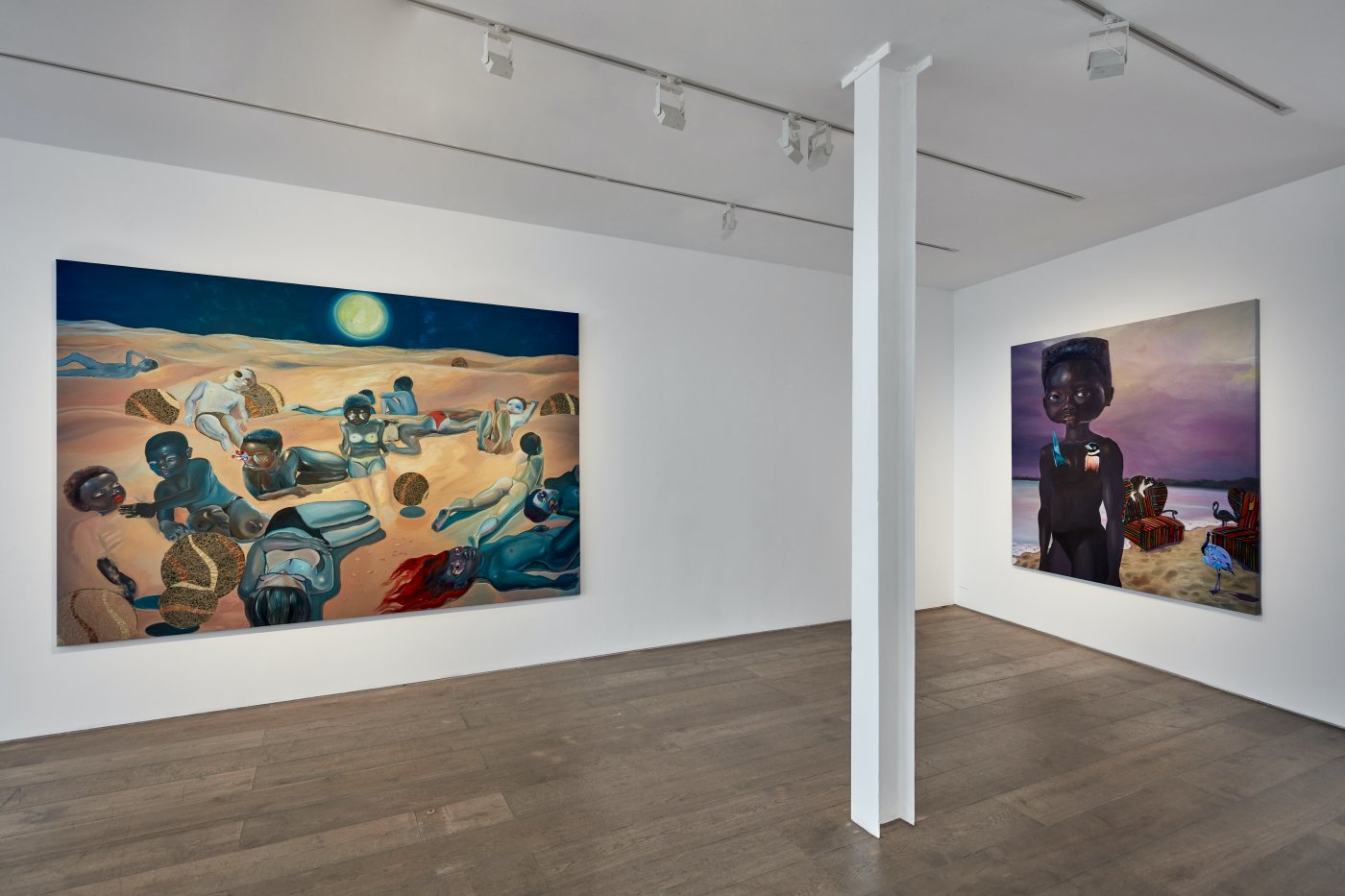 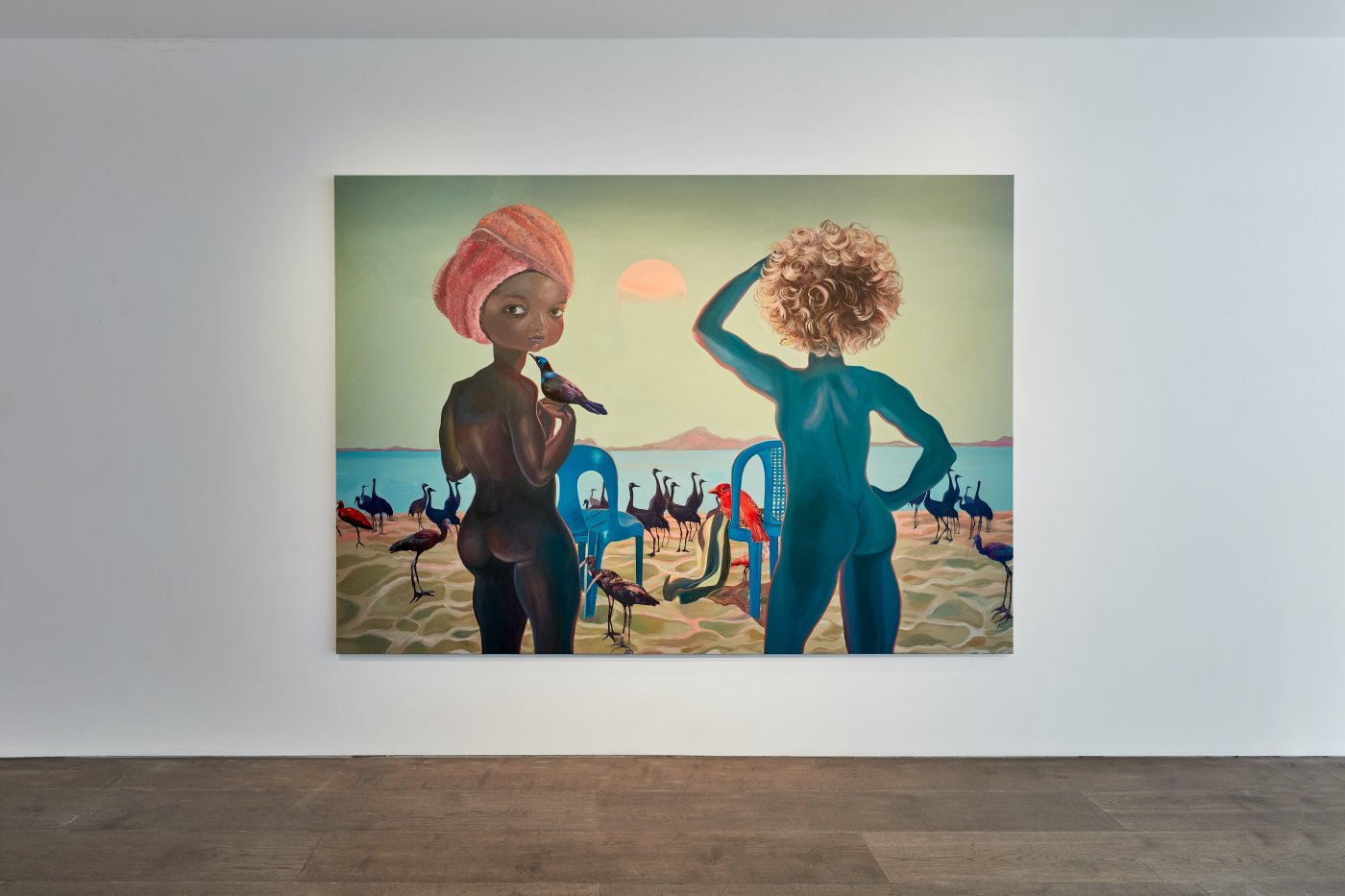 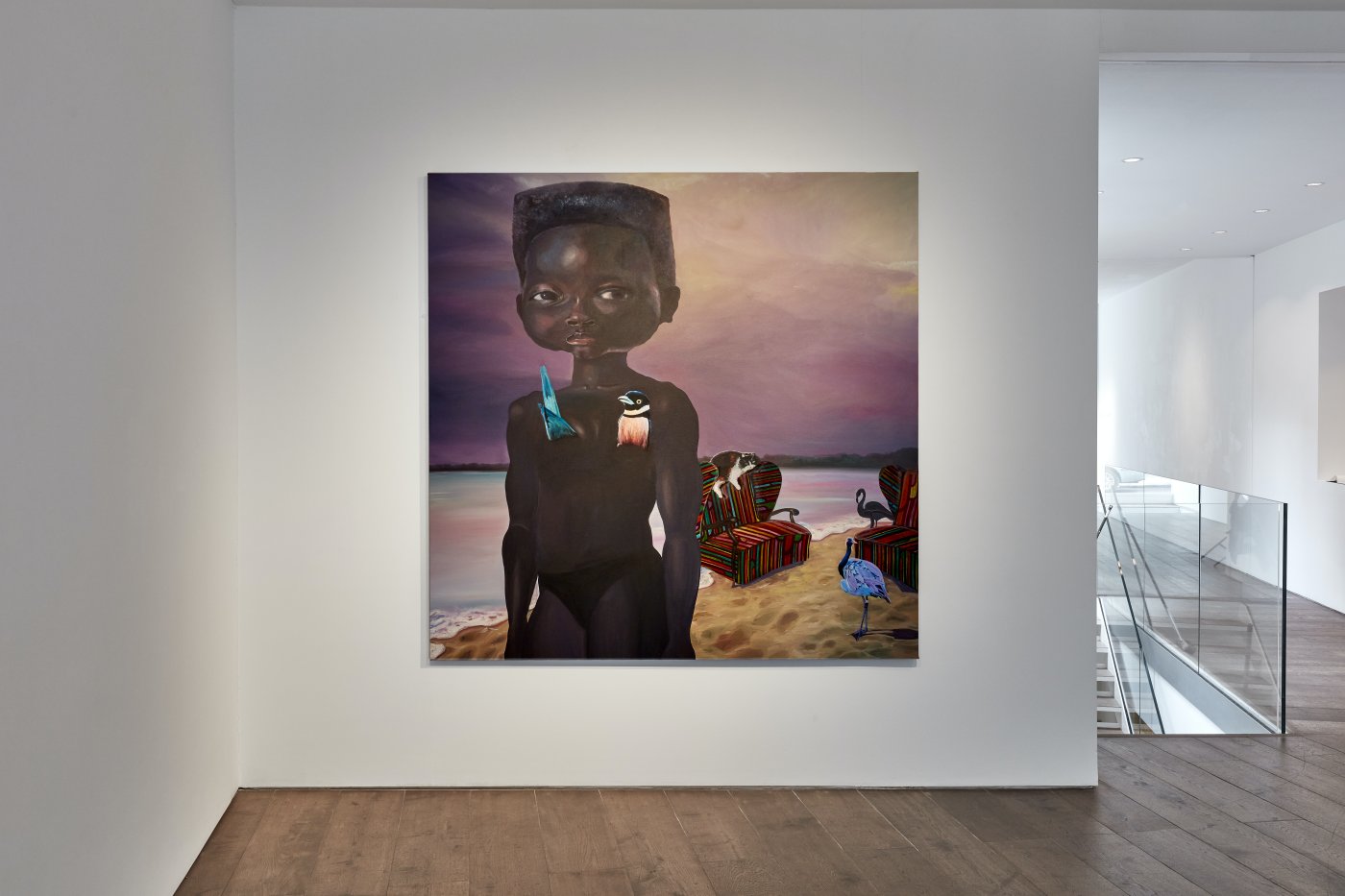 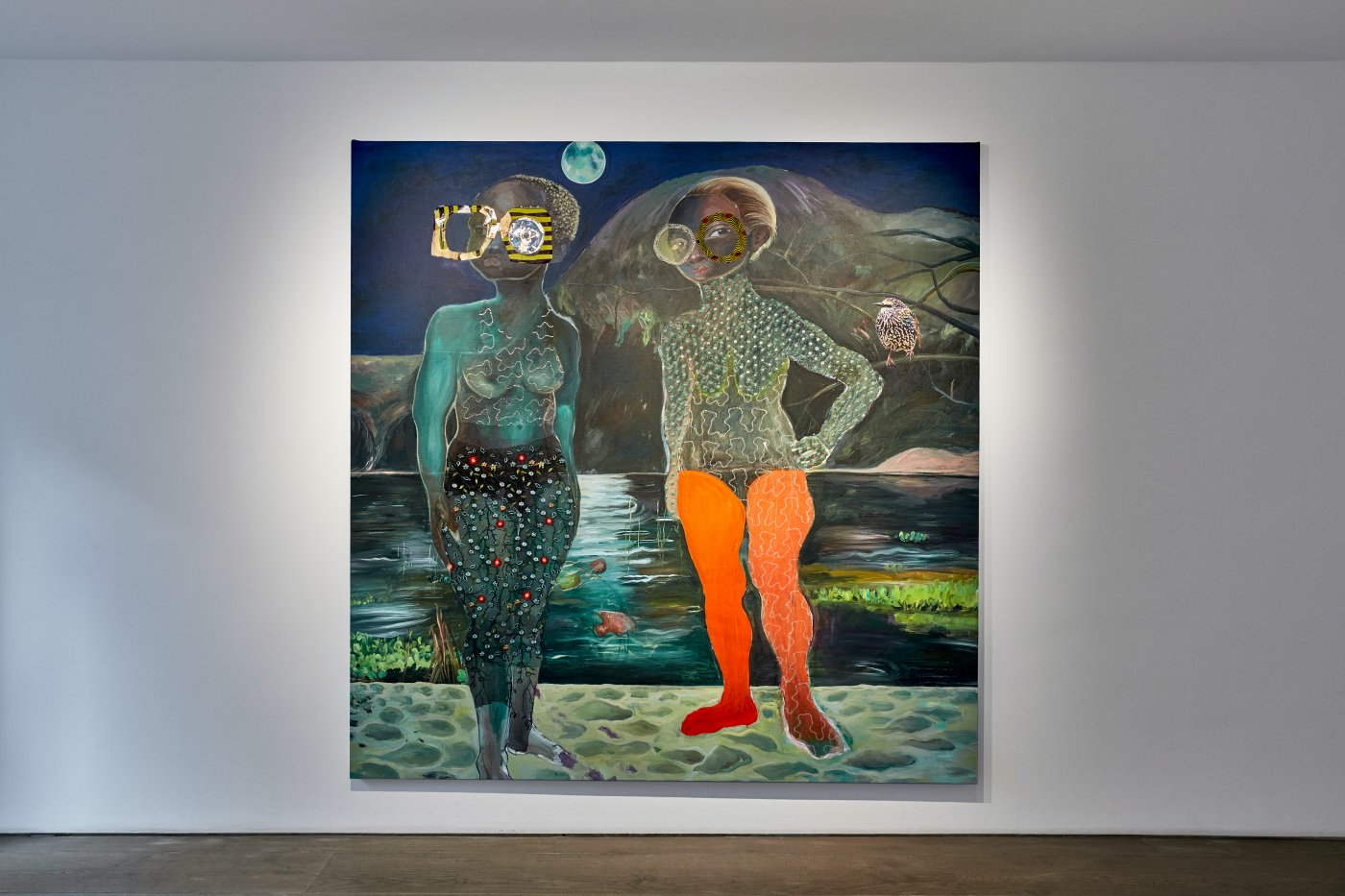 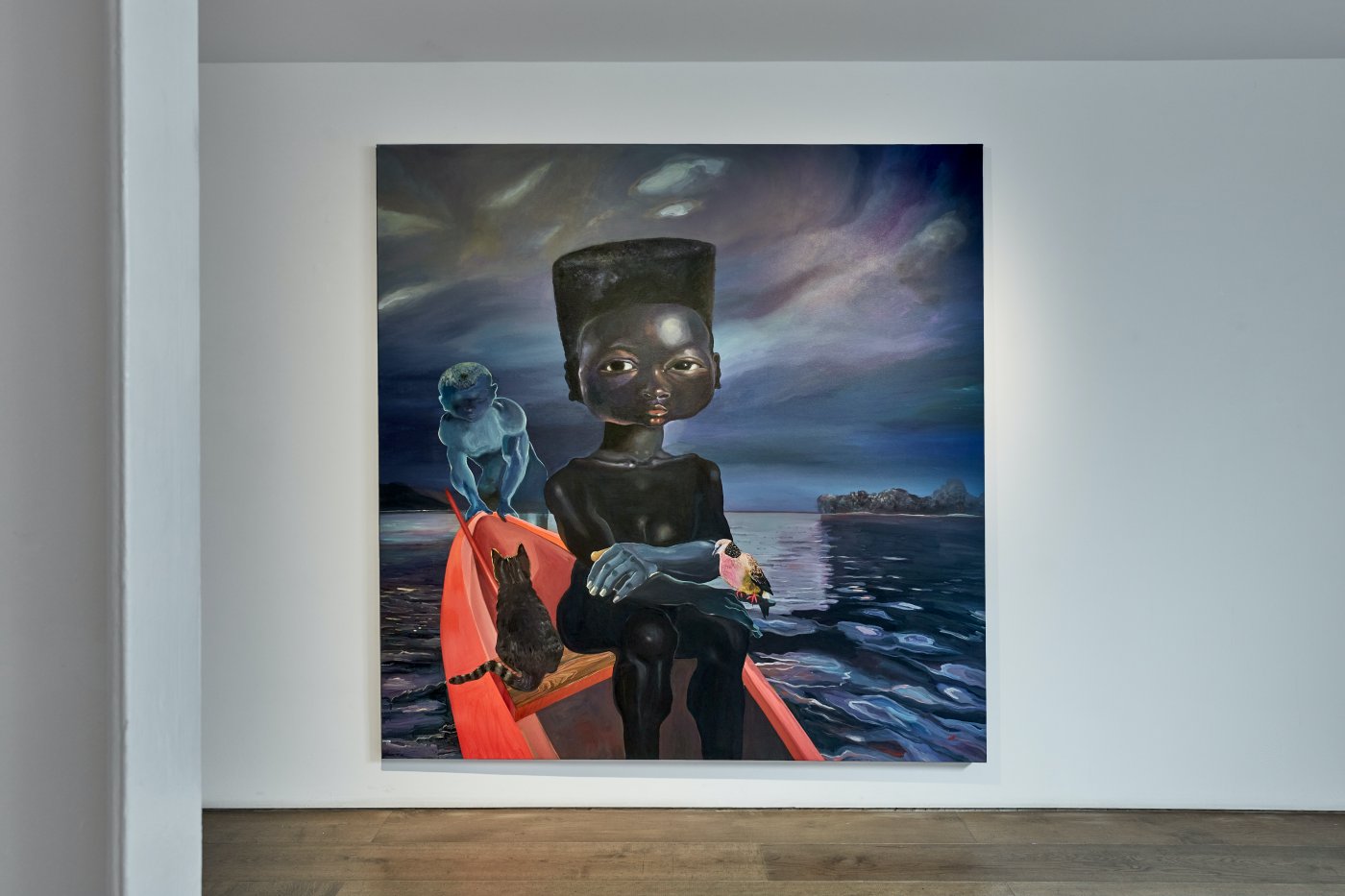 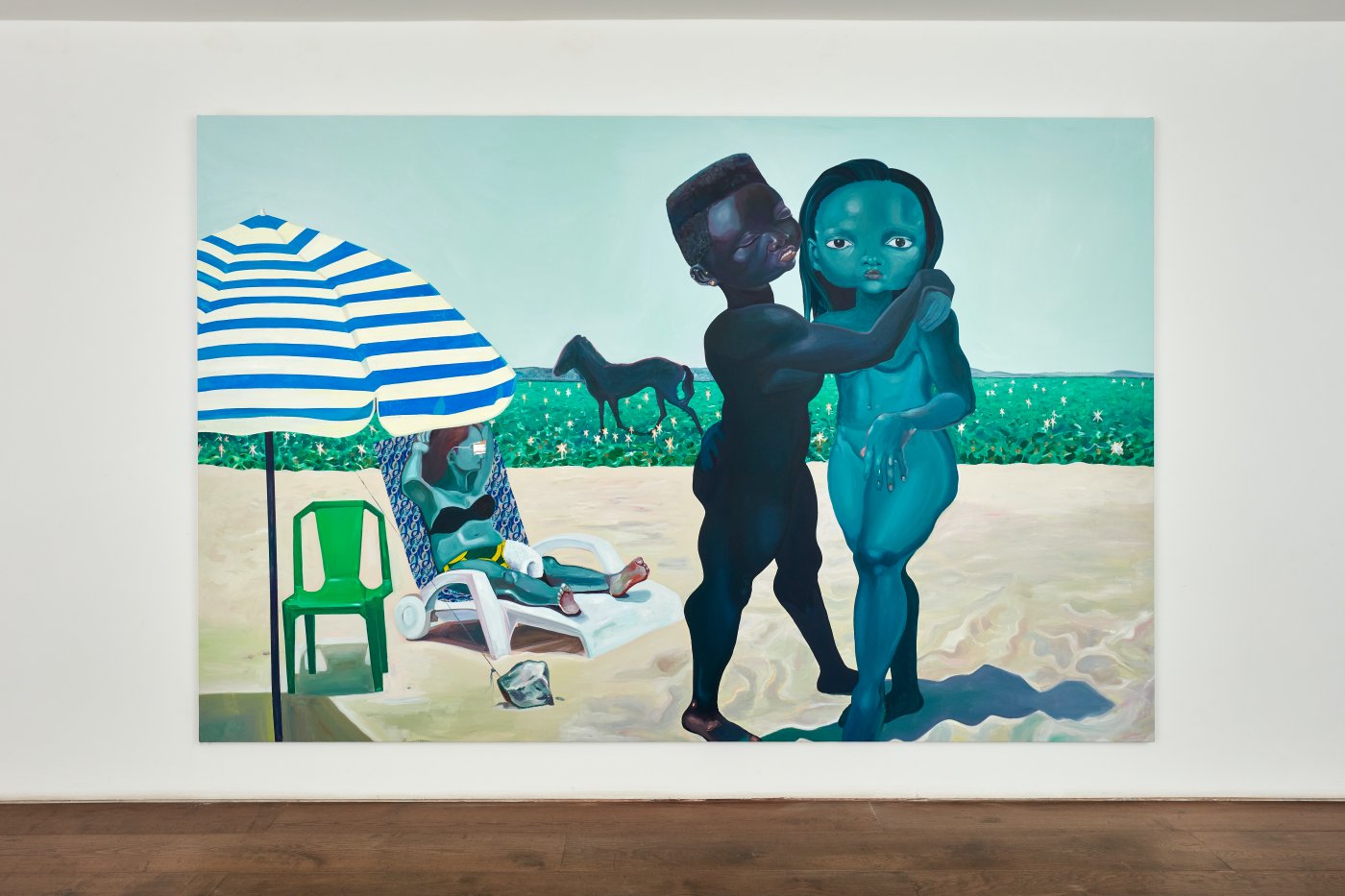 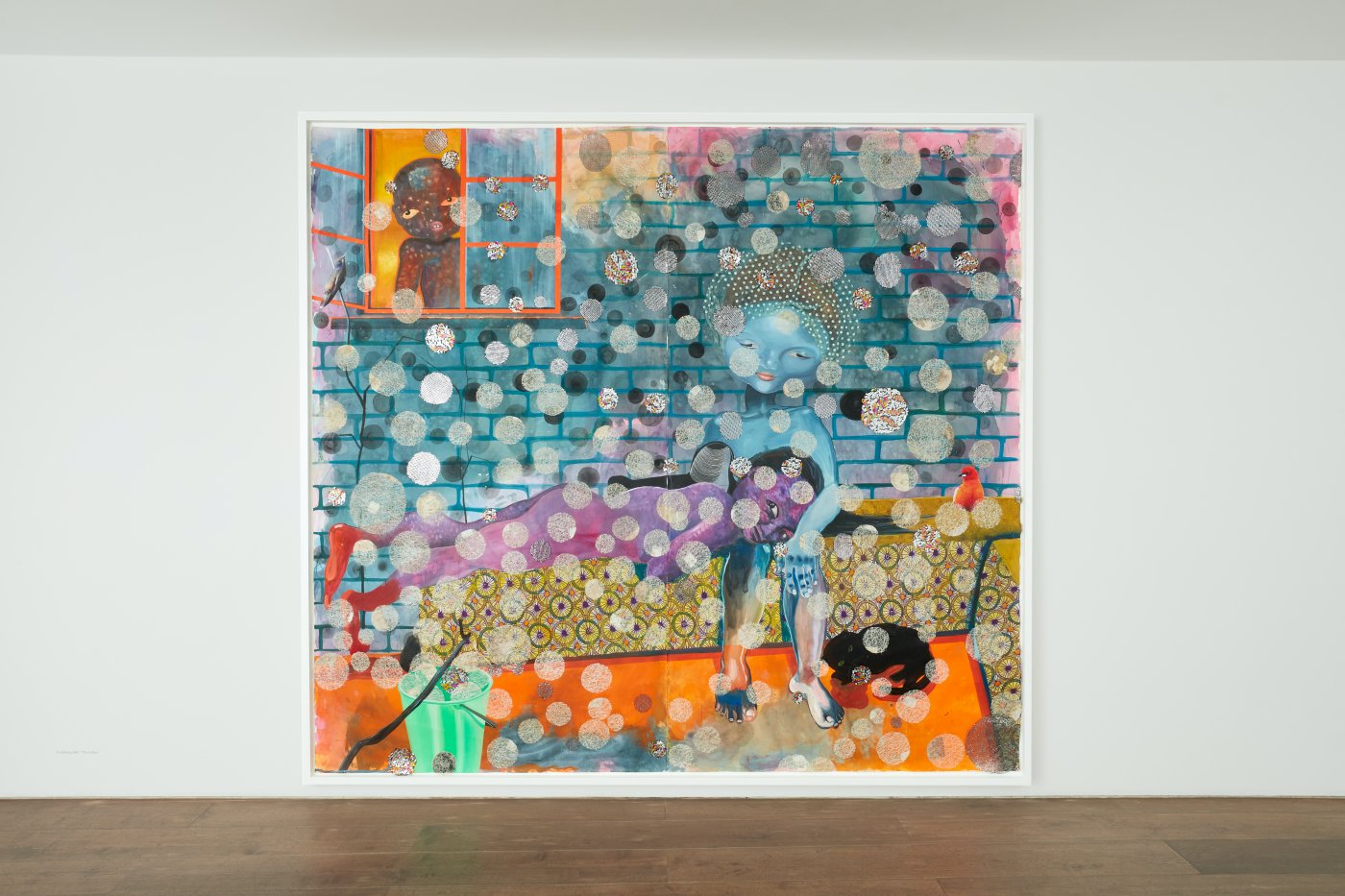 The artist’s works exclusively featured women and men were only noticeable by their absence. This new body of works shows the artist less concerned with the outward, and how women are perceived and perceive themselves, but more with the inward. These new works address profound questions of life and death which affect us all. Although the inspiration behind them is highly personal, her ability to touch so many of us derives from their extreme emotivity.

Recently Emefiele tragically lost her sister who was also her closest friend in life. This event so overwhelmed her that after continually making art since the age of four, she suddenly lost all desire to paint. Almost a year passed before she eventually entered the studio and during that interim her art had undergone a radical transformation. Gone was the previous playfulness, replaced instead by a profound overriding melancholy allied to a philosophical attempt to come to an understanding of what had befallen her and her family.

Viewing the works in the exhibition, one can clearly discern that there is an underlying theme which knits them together. Although we may leave this earthly life as a physical presence, we remain, even if no longer in a tangible form. In the large work, ‘They Came to See God’ two women are standing on a beach; one is looking directly at us and painted as if in life whilst the other is painted in a strange blue hue and is looking away towards the horizon. The clear sensation is that we are looking at Ndidi and her sister. The rich blue colour in which the sister is painted suggests that, although present, she is no longer ‘physically’ there. In another large painting, ‘Rehearsing Death’ we see many characters on a crowded beach yet, here again, although some of the bodies are fully painted, others are already in the process of disappearing into another dimension.

‘Sail Me Down Deep River’ shows a female figure, (presumably the artist herself), on a boat, alone, except for the presence of a small ghost-like character who is seated on the stern and is actually guiding the vessel on its journey across the water. The culmination of viewing these works is to be confronted by a profound meditation on death and loss.
All the pictures feature the sand, sea, sky, animals and human beings as if each element obeys a different time span on earth from the temporal to the eternal. The animals, in particular, often have a metaphorical significance. In the large work, ‘As We Were, Sad Horse’, the lone running horse is able to see into the future and predict the passing away of a loved one. In this remarkable work, the horse is actually running along a crystal sea, where, according to the book of Revelations, John states that seeing a glass which is like a crystal sea would be like seeing heaven on earth.

Previously Emefiele’s pictures reflected a predominantly urban backdrop but in these paintings she has fully embraced the landscape for its ability to symbolise eternity, thus abandoning the transience associated with cities. Other paintings carry the weight of memory as with ‘Ghost Plaiters’ which features her sister at the hairdressers having her plaits done which also continues the artist’s fascination with the important role ‘hairdressers’ play for women in Nigerian society. However, although it’s evident that there has been a radical shift in the content of her pictures, there has also been a marked development in how she utilises collage, in that it is now used more sparingly but very pointedly. Moreover, there is a noticeably greater refinement in her use of paint. The delicacy of her brushwork and subtlety of colour enables her to increase our emotional responses to her pictures. ‘Untitled (Beach Girl)’ is a wonderful example of this with an extraordinarily painted landscape where both the sky and sea are created with a subtlety of colour not previously seen in her output.

During the course of the exhibition a book tracing the artist’s career from 2012/13 to the present will be published. It will contain a presentation by the renowned collector Valeria Napoleone and a critical text by the art critic Rachel Spence as well as detailed reproductions of many of the artist’s works over the last 8 years.

Ndidi Emefiele (b. 1987, Nigeria)
Ndidi Emefiele has exhibited widely both internationally and in the UK including solo/group presentations in Miami, New York, London, Chicago, Los Angeles, Lagos, Johannesburg and Abuja.
Emefiele’s works are part of private collections such as The Deighton Collection, The Beth Rudin DeWoody Collection and The Jimenez – Colon Collection. Public collections include: The Mint Museum, North Carolina, USA; The Nigerian Stock Exchange, Lagos, Nigeria and The University of South Africa, Cape Town. Importantly, she was awarded with the prestigious ‘The Olive Prize 2016’ (Excellence in Painting, The Slade School of Fine Art) and was among the nominees of The Future Awards Africa 2016 for Arts & Culture. In 2018 she presented her works at the Taubman Museum of Art, Roanoke, Virginia as part of the exhibition “Reclamation! Pan-African Works” from the Beth Rudin DeWoody Collection. In 2020 Ndidi Emefiele’s works were included in the exhibition ‘Queen: From the Collection of CCH Pounder’ at The Charles H. Wright Museum of African American History, Detroit and the online exhibition ‘The Cookout: Kinfolk and Other Intimacies’ at the Museum of Contemporary African Diasporan Arts (MoCADA) in New York.