Nathaniel Mary Quinn: NOT FAR FROM HOME; STILL FAR AWAY

Nathaniel Mary Quinn: NOT FAR FROM HOME; STILL FAR AWAY

I hope to convey a sense of how our experiences, both good and bad, operate to construct our identities. I also want to portray a mutual relationship between the acceptable and the unacceptable, the grotesque and what is aesthetically pleasing.
—Nathaniel Mary Quinn

Gagosian presents NOT FAR FROM HOME; STILL FAR AWAY, an exhibition of new paintings and works on paper by Nathaniel Mary Quinn. This is his first exhibition with the gallery in New York. 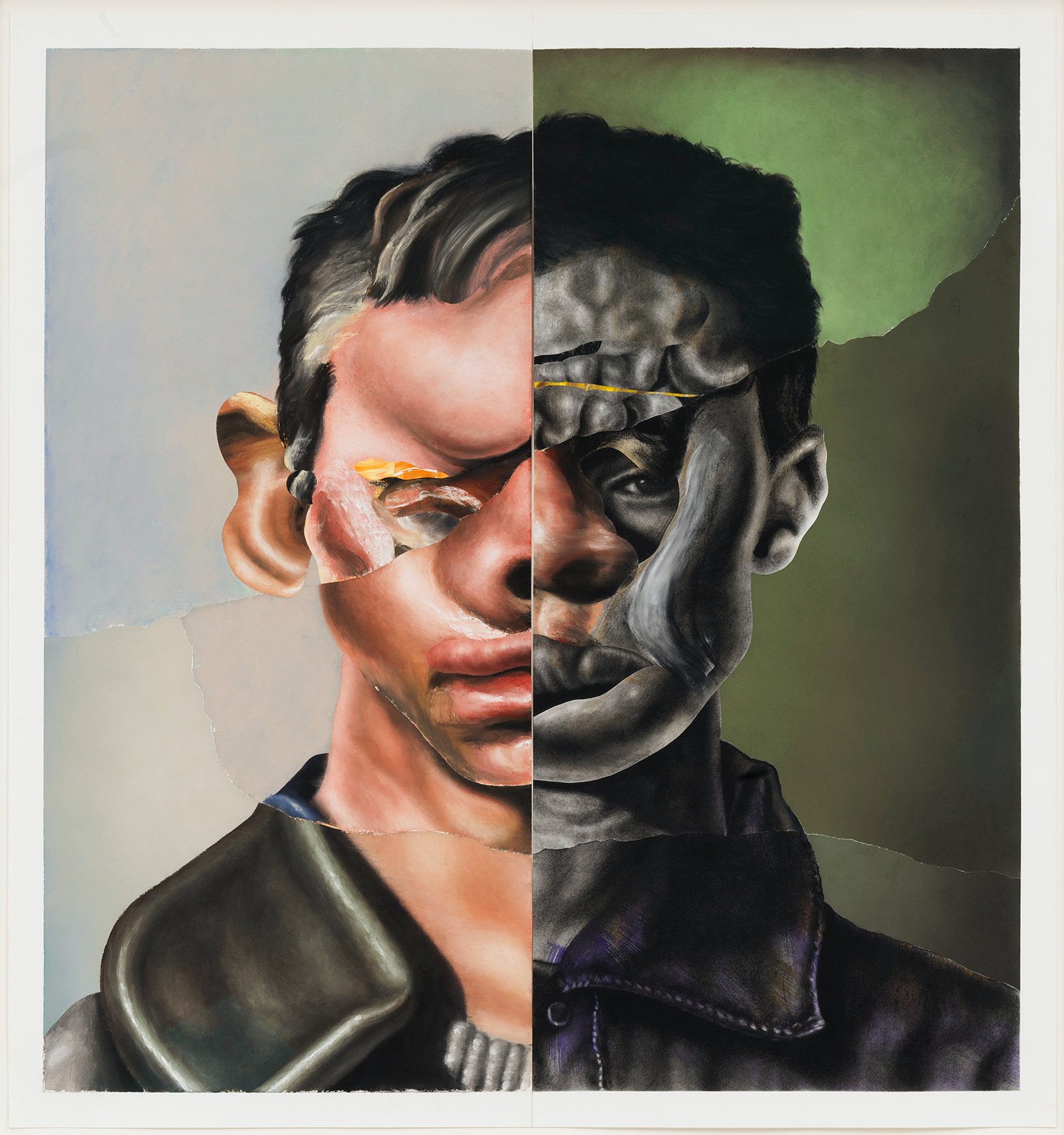 In striking composite portraits rendered in charcoal, gouache, oil paint, oil stick, and pastel, Quinn probes the relationship between perception and memory. Bringing together visual fragments from a variety of sources—including online media, fashion magazines, comic books, and family snapshots—he conjures hybrid faces and figures that are neo-Dadaist in their fractured appearance, yet realist in their carefully painted details and overall psychological effect—a divide that speaks to the intensity of in-person encounters.

With these portraits, Quinn furthers his dynamic take on the Surrealist strategy of the cadavre exquis. Working without preliminary sketches, he produces near perfect simulations of torn-paper collages. Rough-hewn yet precisely realized, these disjunctive visions are consistent with the complicated personalities and social issues they represent. By focusing on the multifaceted and mercurial nature of the subconscious mind—and by relating key episodes and individuals from the past to larger societal currents—Quinn transcends simple likeness in his portraits to achieve a visceral fusion of invention and recollection.

Pilcher and Jackson (2021), Quinn’s largest work on paper to date, is a tribute to Dr. Joy E. Pilcher and Ms. Jacquenette Jackson, teachers from his Chicago schooldays. The grassy field before which the sturdy figures stand is the grounds of Zenos Colman Elementary School, where the two educators took a pivotal interest in Quinn’s educational and social development. In The Lesson of Cut-Rate Liquor (2021), Quinn alludes to a more troubled aspect of his background: a local “studio of excessive drinking” where, he recalls, his late alcoholic brother, Eugene, could always be found. The image of a crumpled face peering out from beneath a broad-brimmed hat hints at the deleterious effects of drink, a habit that “Baby-Gene,” like many before and after him, developed to cope with the challenges of his environment.

Quinn has worked extensively in diptychs, using the form to symbolize the dichotomy of human personality. Double-Barreled Shotgun (2021) recalls a painful betrayal, akin to a shot from the titular weapon, that he experienced at the hands of a now-estranged relative. Vertically split into two halves—the left colorful and sunny, the right in dark-toned grisaille—the male subject captivates with his direct, confrontational gaze, symbolizing the stark contrast between affect and actions. In Frog (2021), however, the diptych stands for a more nuanced complexity as Quinn revisits the subject of the first composite portrait he made eight years ago: his brother Charles. The work appears joyful—vibrant daubs of paint dance around Charles’s face and toothy smirk—yet it is physically sundered, a reminder of the hesitancies and indelible schisms that define human relationships.