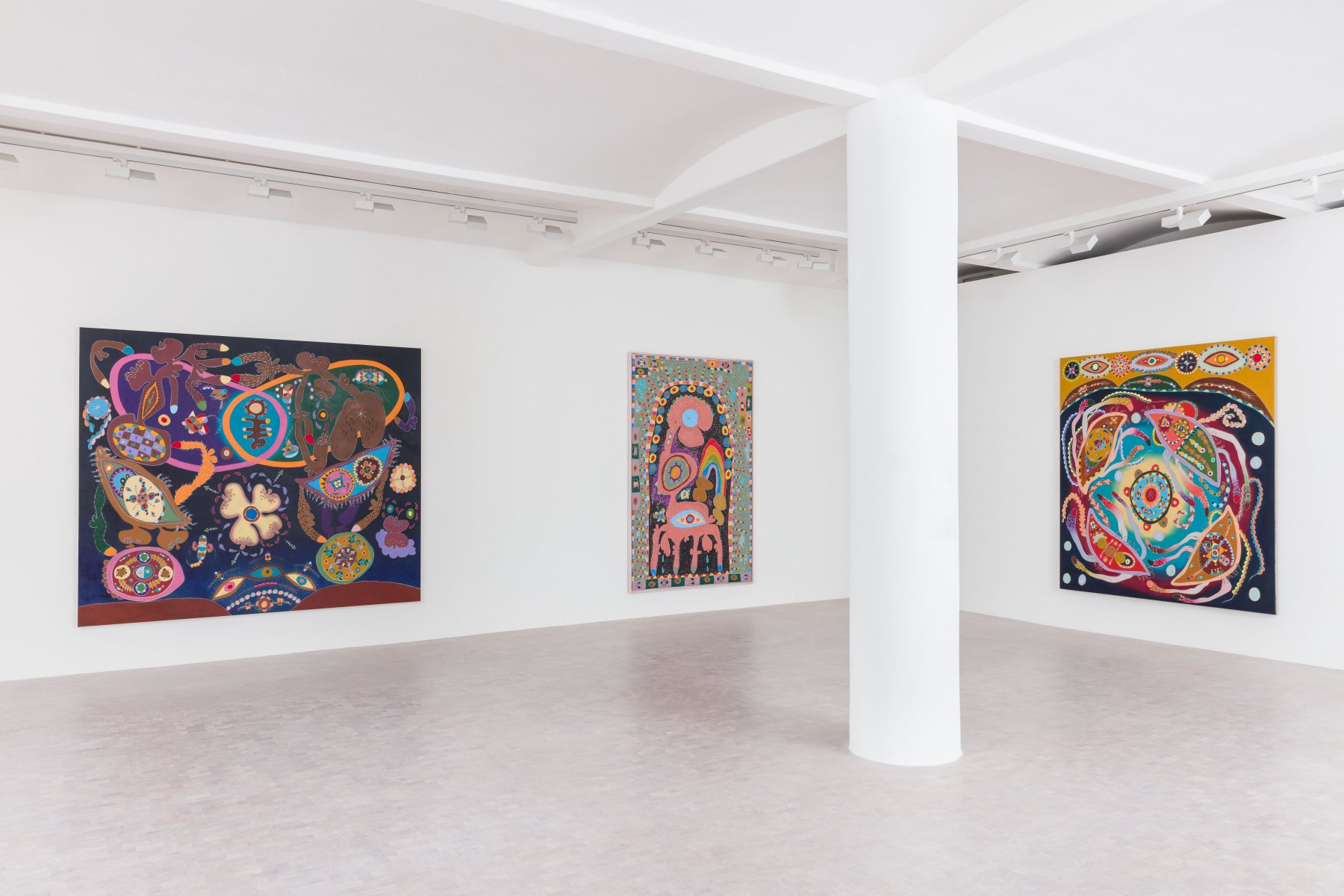 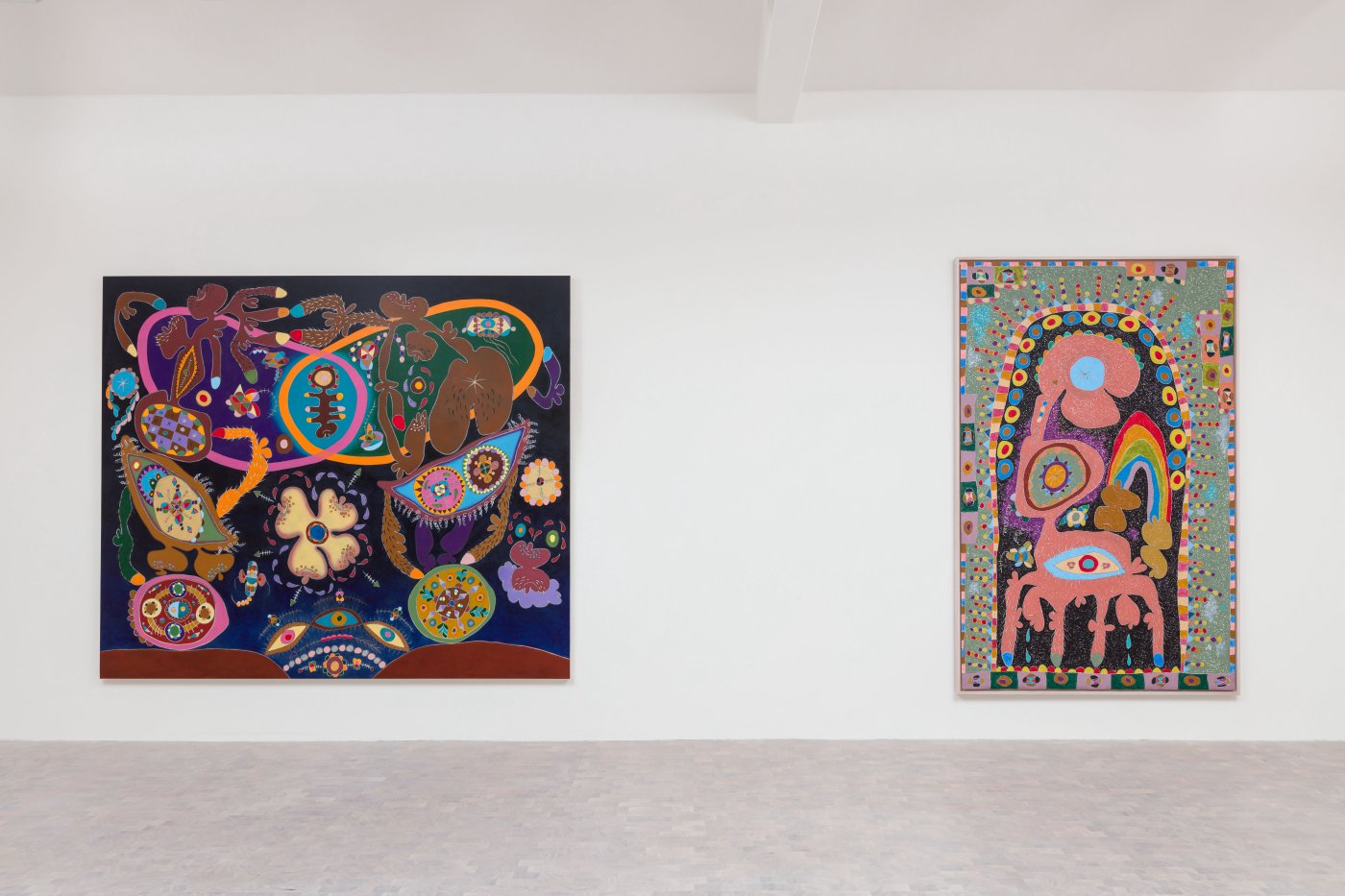 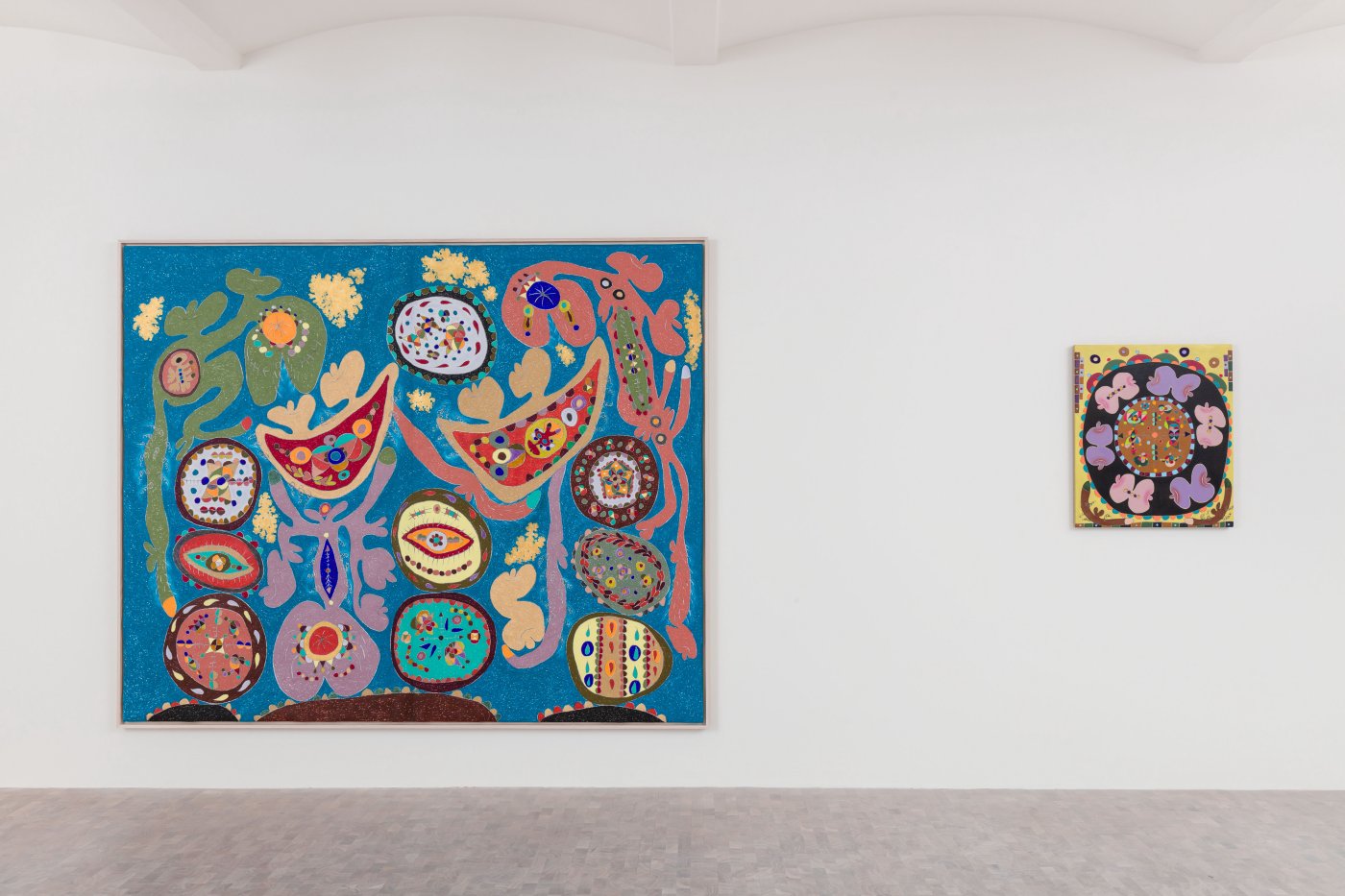 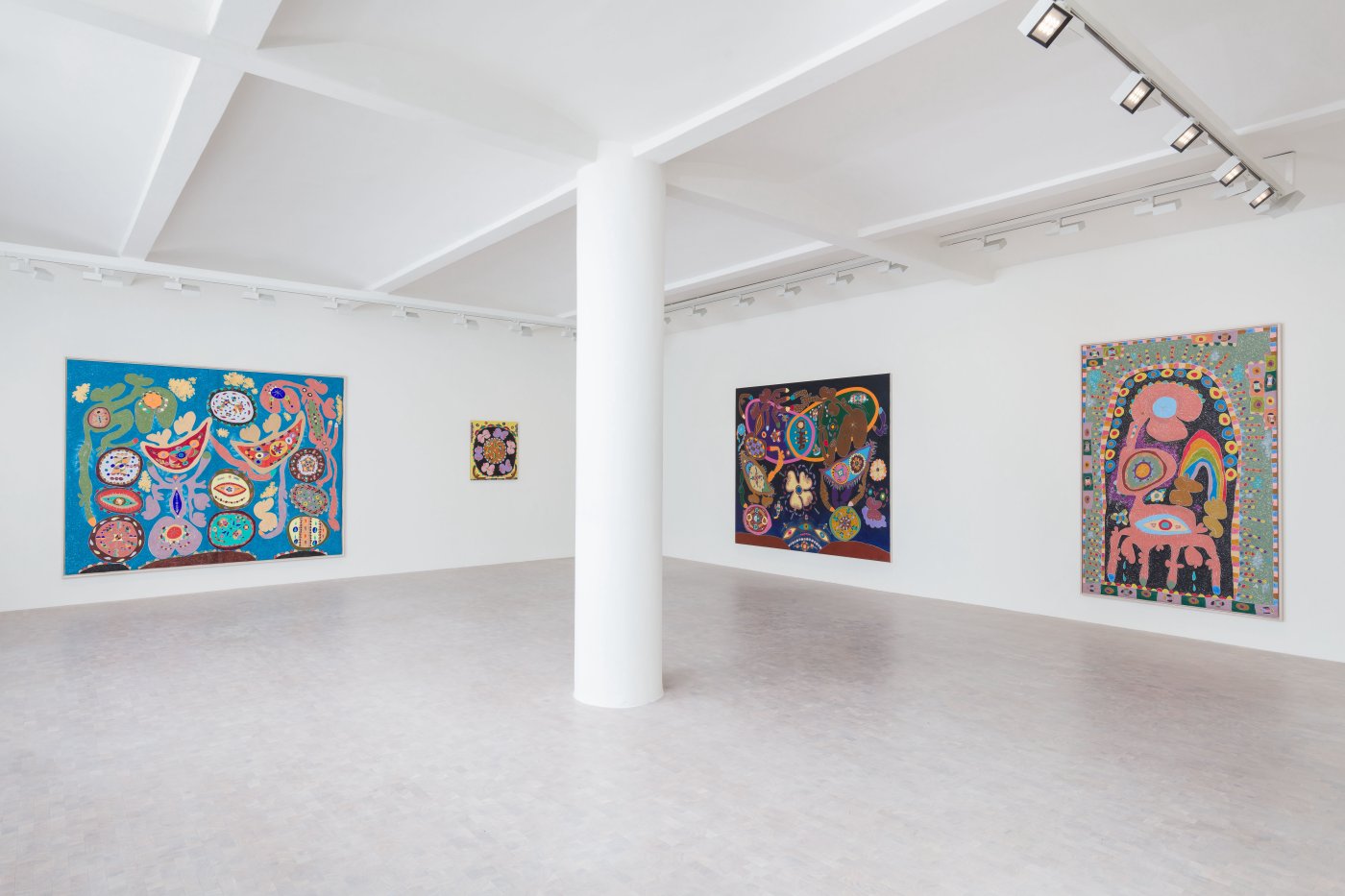 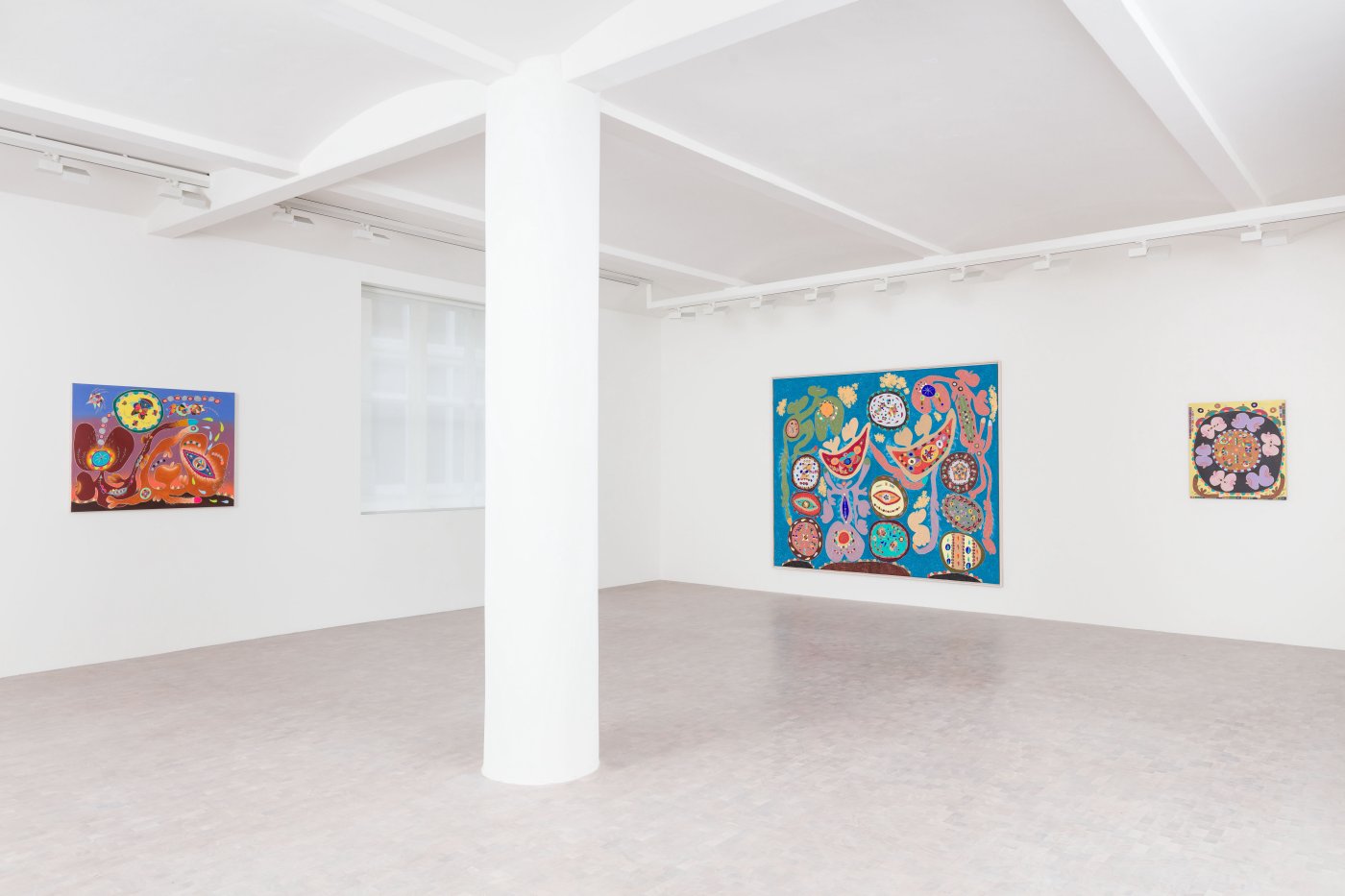 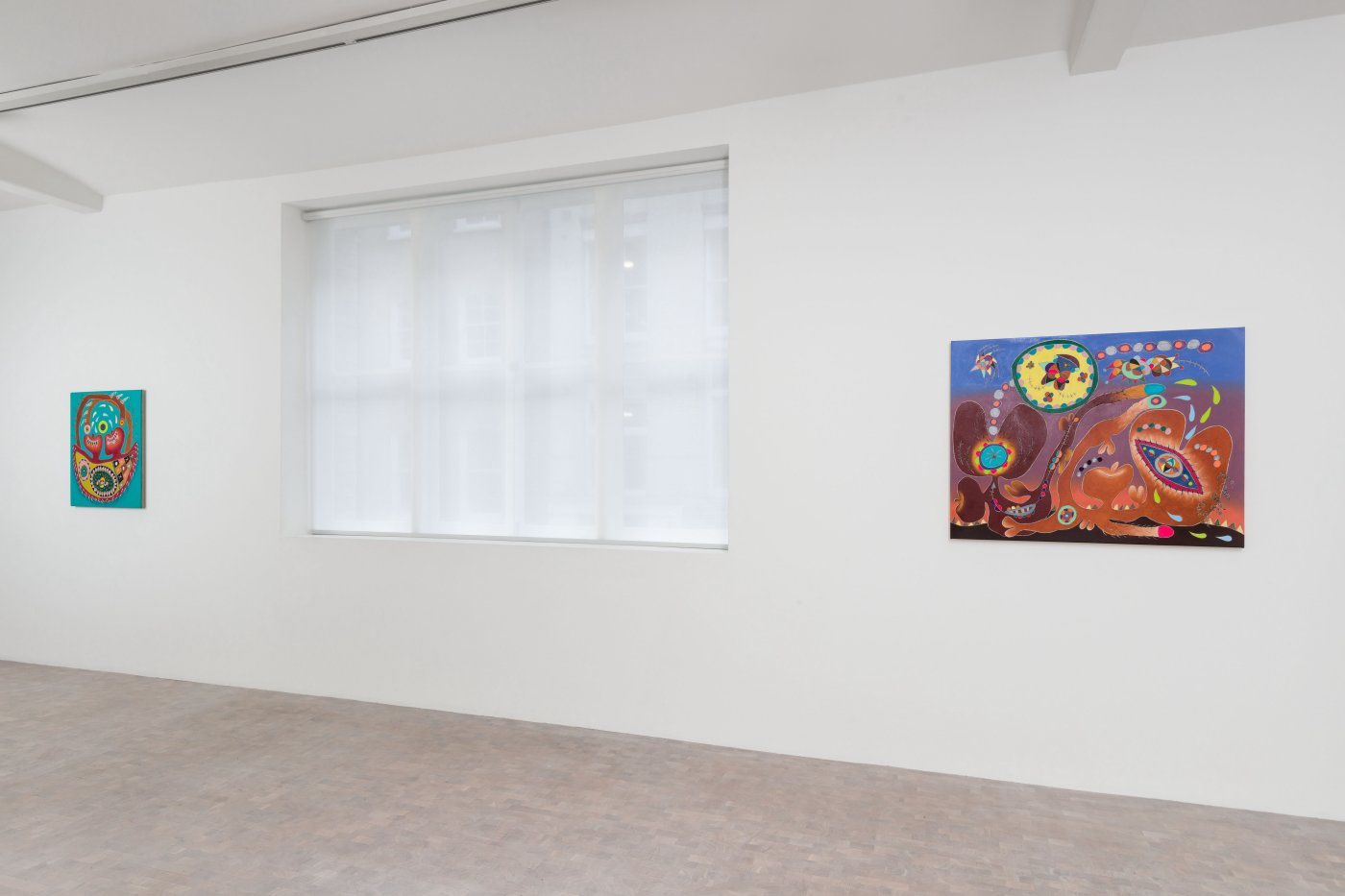 Working in oil, pastel and graphite, across both canvas and paper, Hantehzadeh brings together freewheeling figurative elements in vibrant and arresting compositions which allude to a range of references, including Paleolithic cave paintings, indigenous art from Mexico and ancient Persian rug patterns. Hantehzadeh’s work often reveals their particular interest in Mayan and pre-Islamic art and artefacts, occasioned by evidence of matriarchal and gender-fluid practices that existed in these cultures prior to European colonisation.

Hantehzadeh creates moving narratives that examine the shifting spaces that coalesce around identity, personhood, sexuality and race. They evoke a world in which categories are deliberately in flux and undefined, eschewing dogmatic binaries in favour of a more nuanced approach to gender that has much in common with the natural world. Embellished orifices and sexual organs are transfigured from the corporeal to the otherworldly in an earthen palette enlivened with phosphorescent pigments, which complement their biomorphic and abstract forms. In On the night of the full moon, we learned to trust each other, the artist looks to nature for enlightenment, invoking indigenous wisdom. Ovoid shapes are balanced precariously, jostling against one another in a visual representation of the meaning of trust. Meanwhile a circular form at the height of the drawing acts as a metaphor for the moon – ever present but out of reach. The influence of Hilma af Klint and Agnes Pelton’s spiritually inflected abstractions is felt in Hantehzadeh’s celestial compositions, which deliberately disorient the viewer with their spiralling architecture.

Hantehzadeh returned to the United States – their country of birth – after being raised in Iran until early adulthood and their deeply personal works reflect this cultural duality in the hybrid forms that occupy their paintings and drawings. In dismantling preconceptions of a pre-modern Islamic gender system, the artist fortifies their stance on Iranian feminism and the powerful role it plays in their country’s culture wars. Much of Hantehzadeh’s recent work reflects on their displacement from Iran: The gate is open is a meditation on vulnerability and openness in the face of the country’s extreme laws against LGBT people, while Last year was the 10th year explores subconscious personal growth, commemorating a decade of Hantehzadeh’s life in the US. In Which way time is moving? they address the inevitable passage of time and the ways in which it is dilated at different points in history, both personal and collective. Hantehzadeh cites the rapid Westernisation of Iran before the Islamic revolution and the subsequent return to conservative social values, as well as the ongoing rollback of reproductive rights in the US, as examples of the conflation of time and hubris.