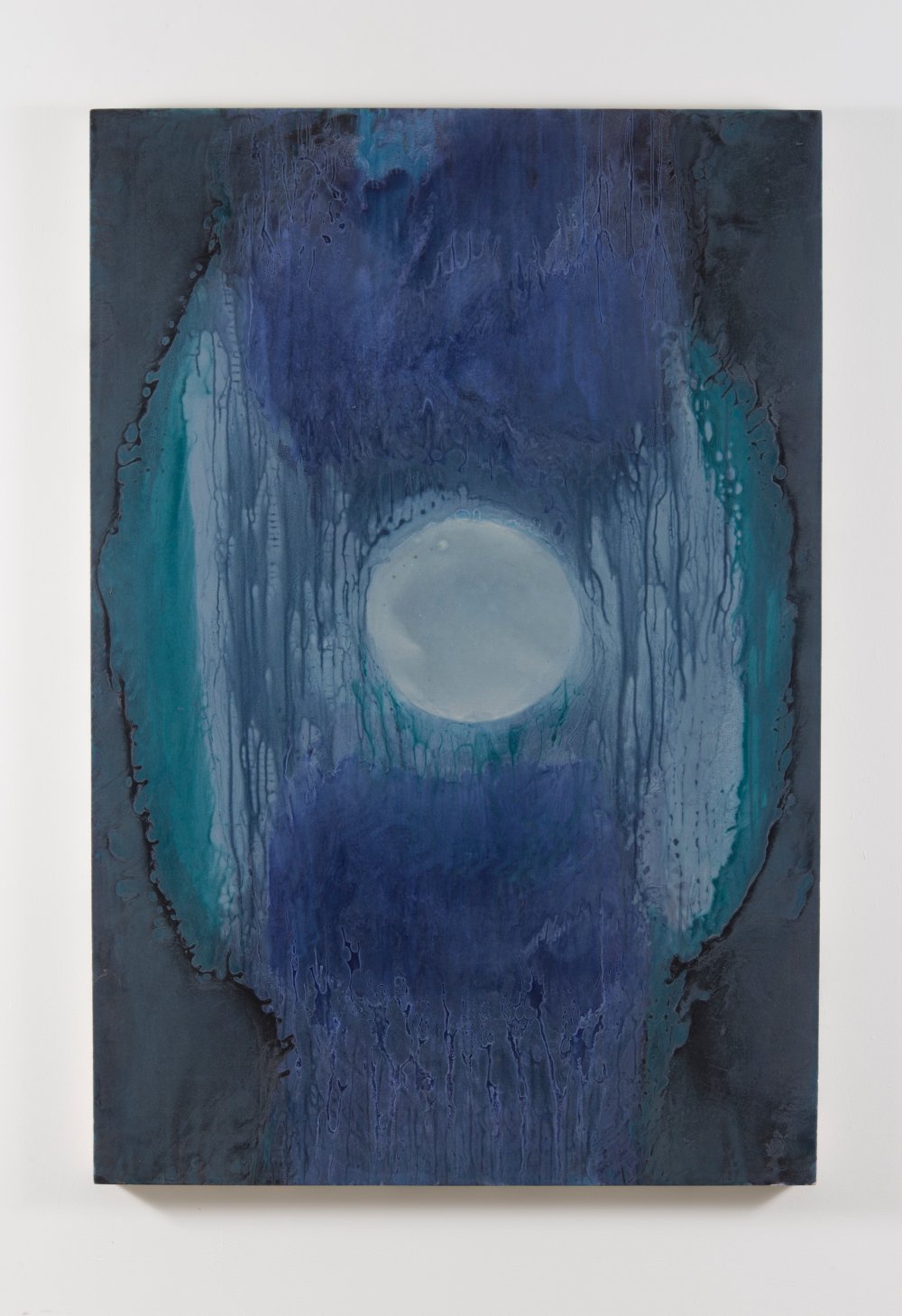 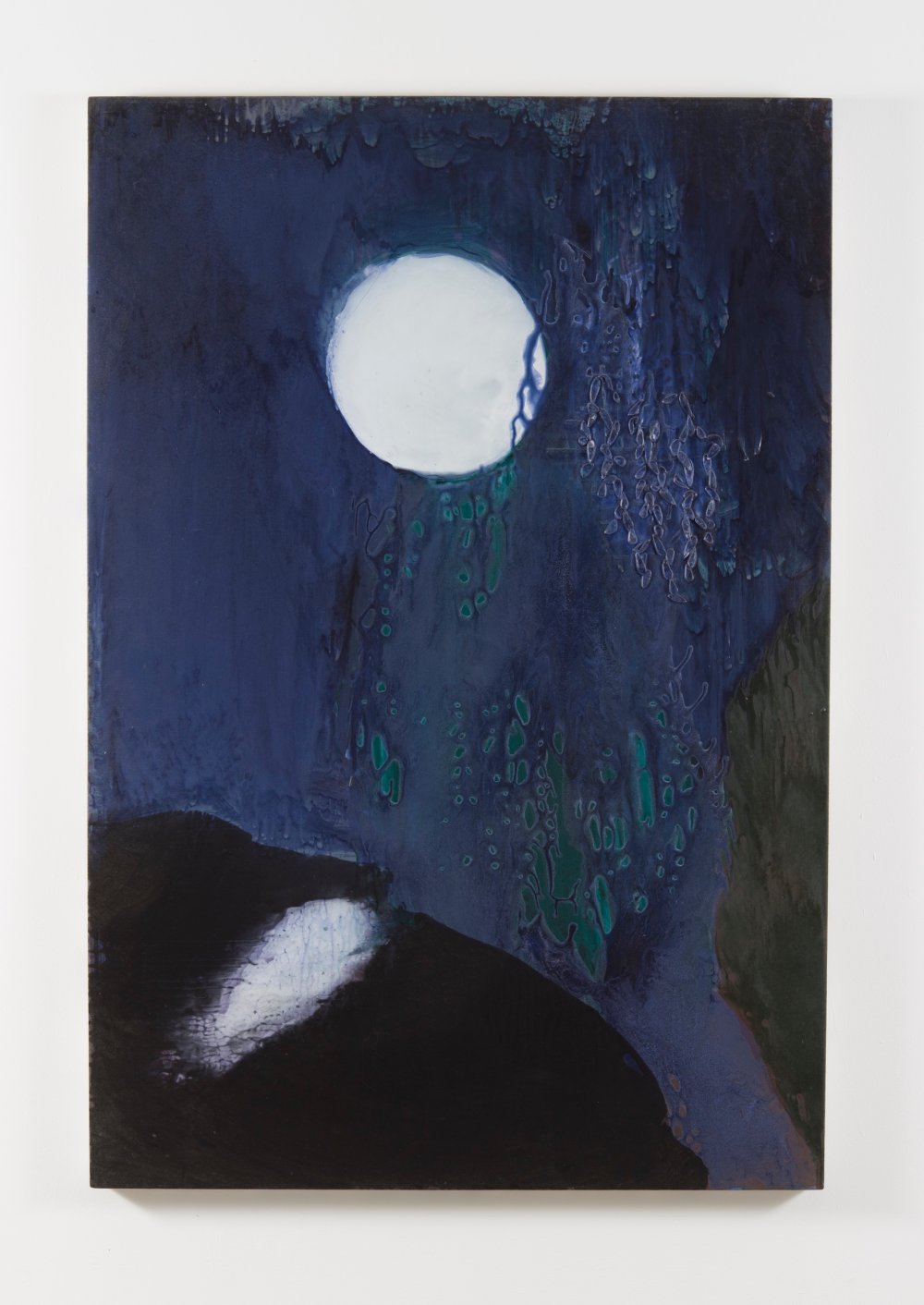 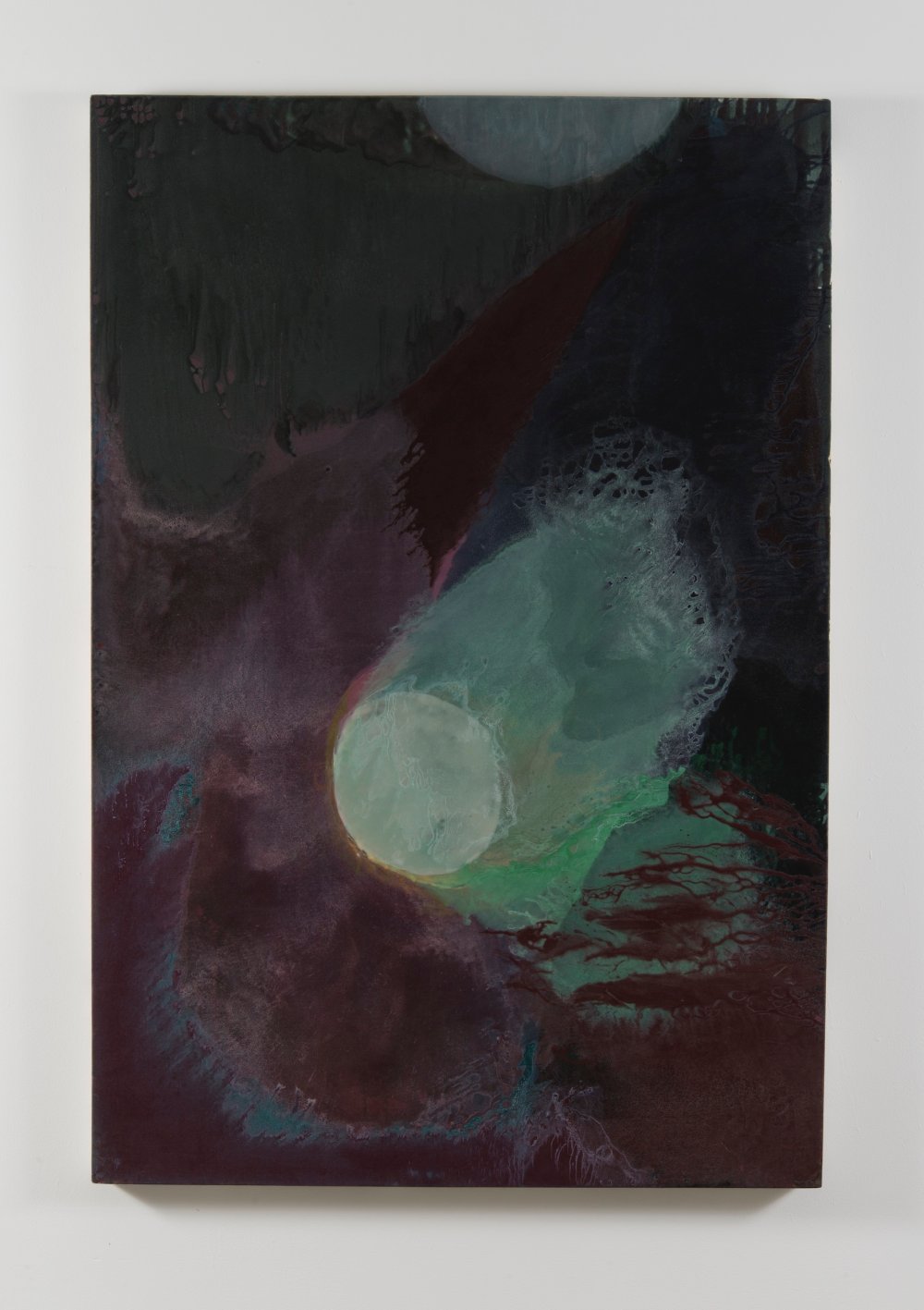 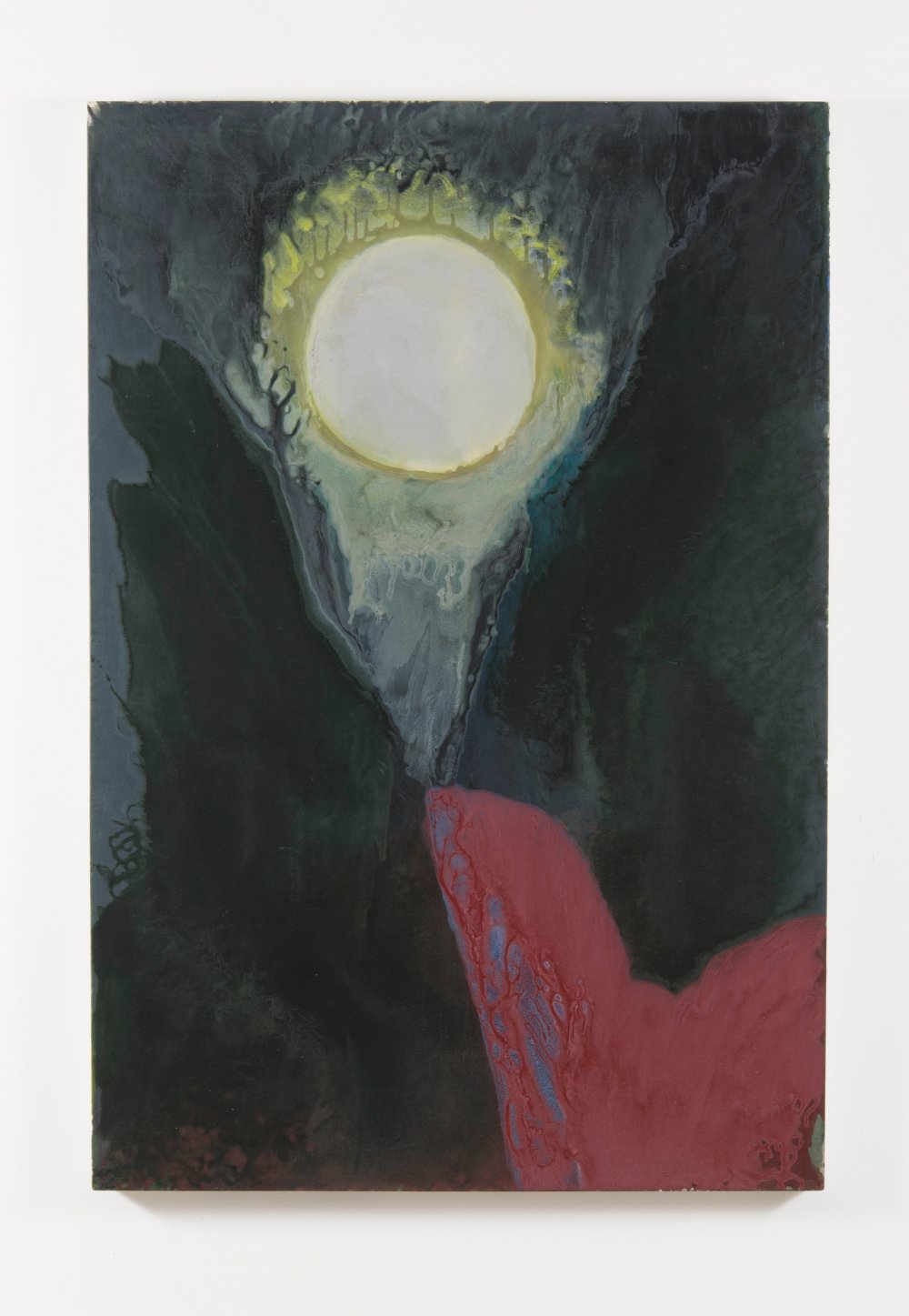 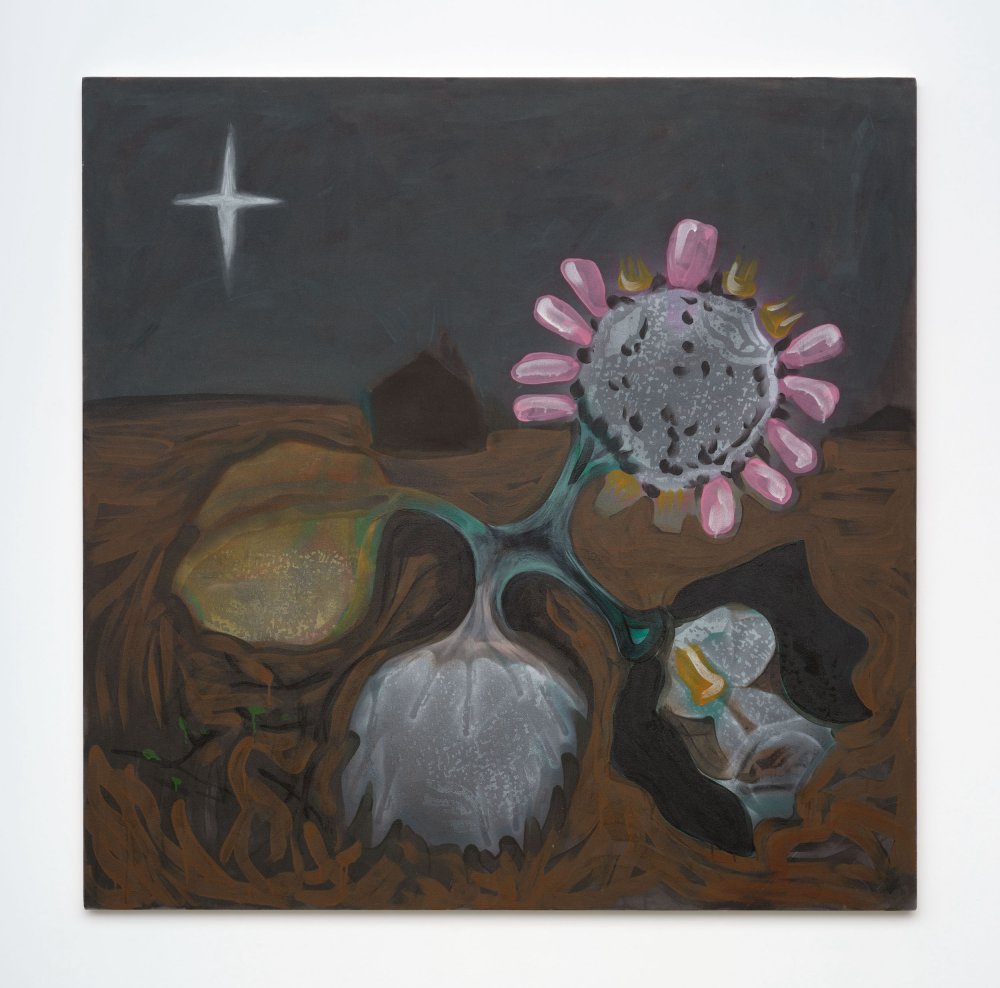 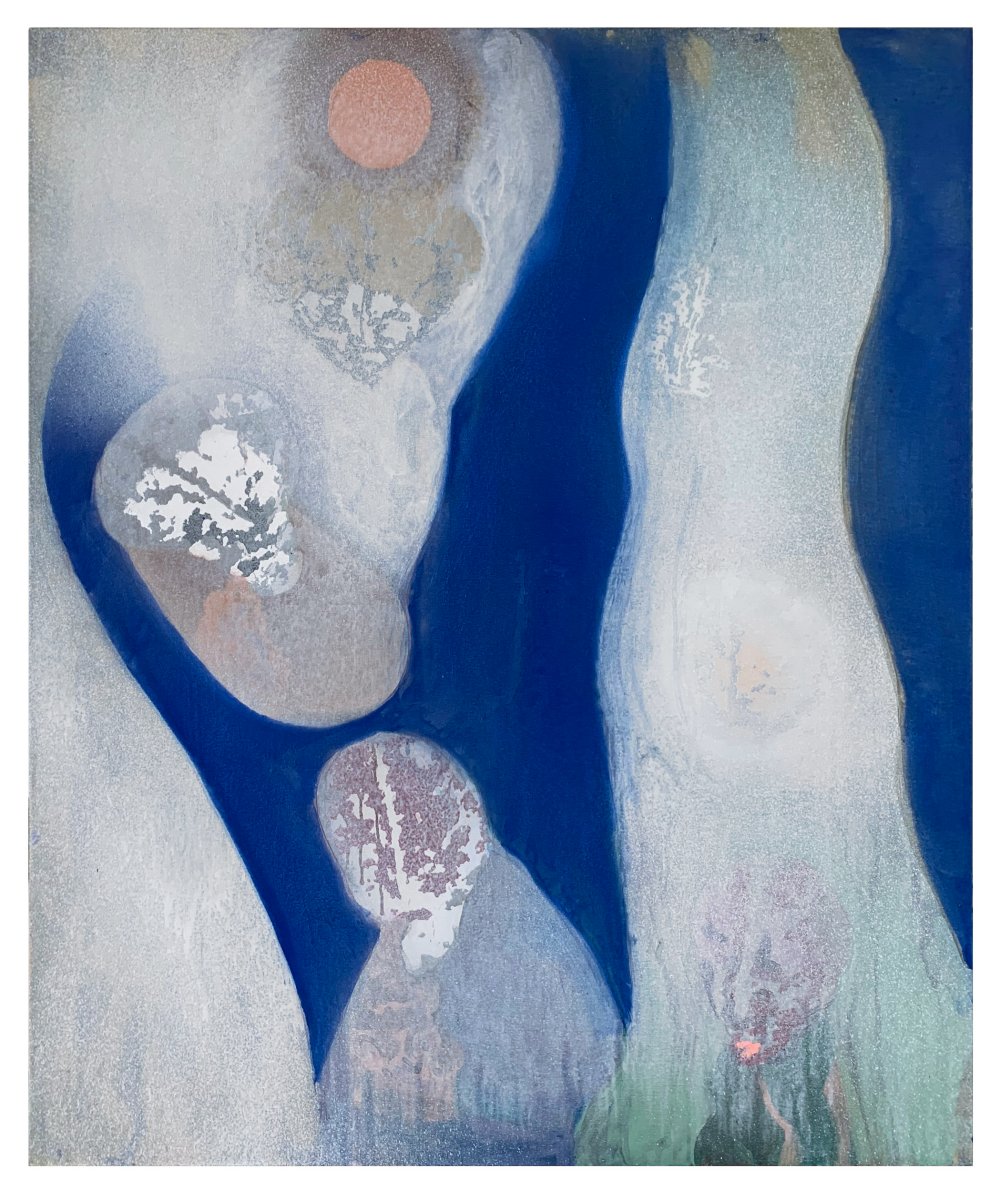 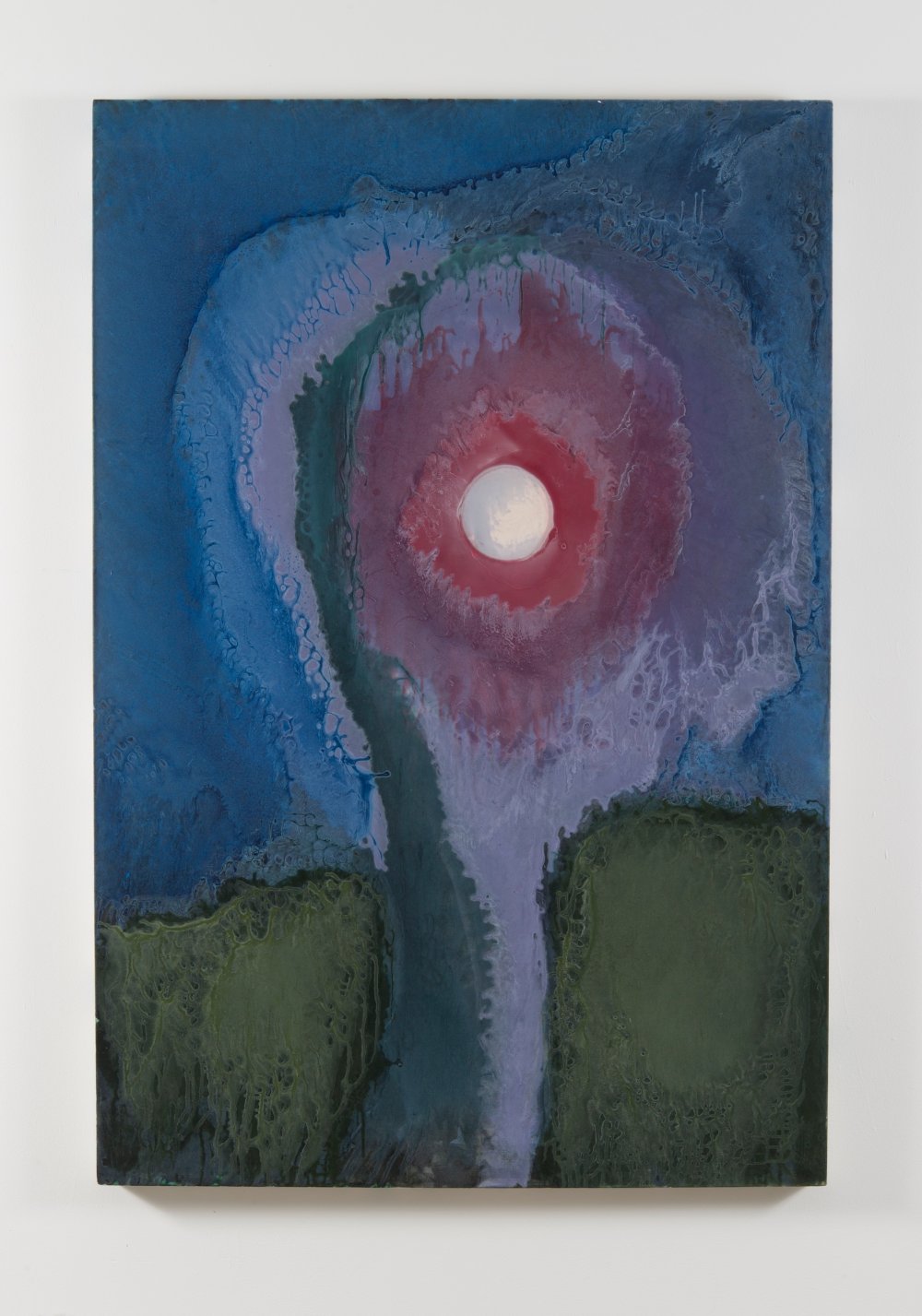 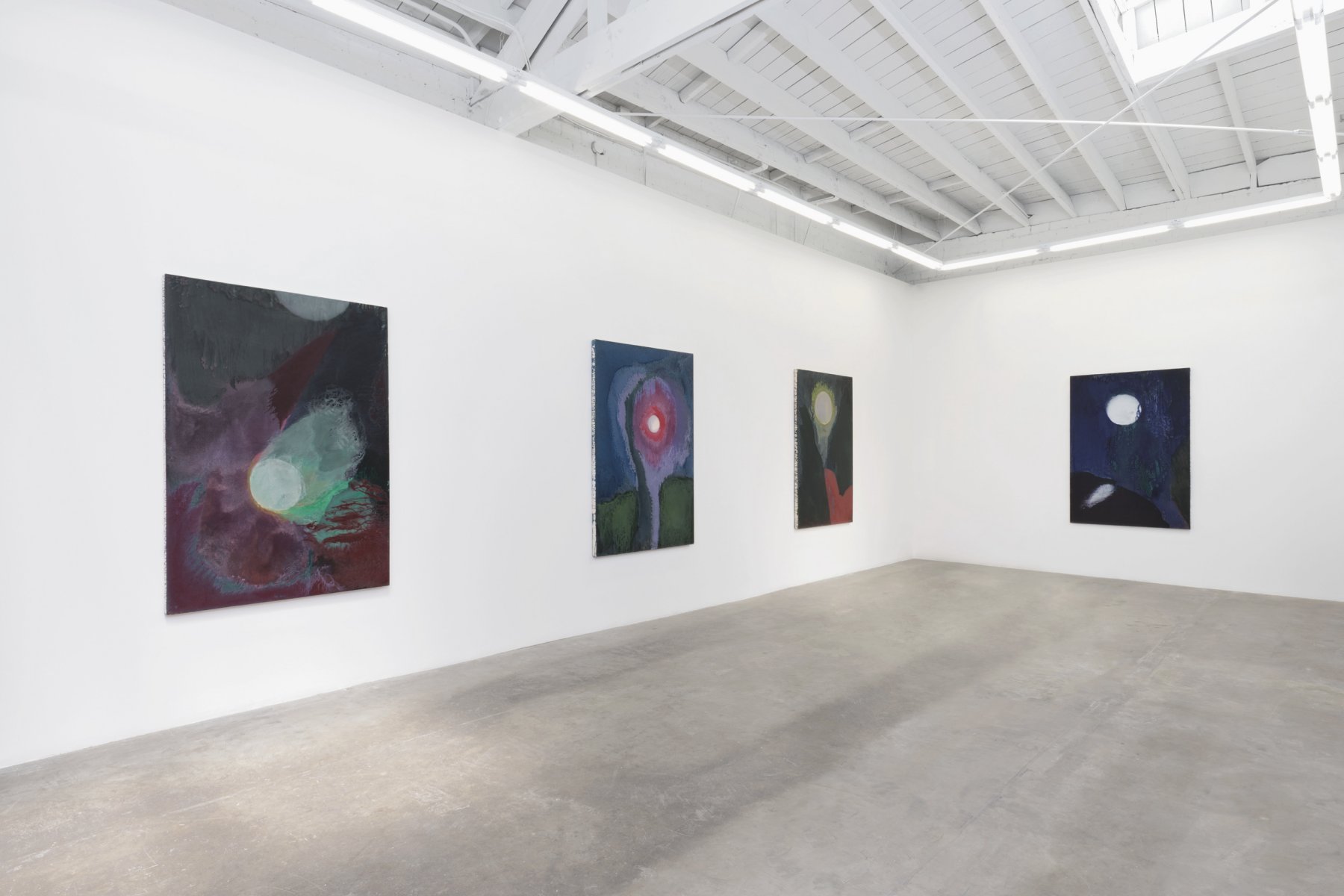 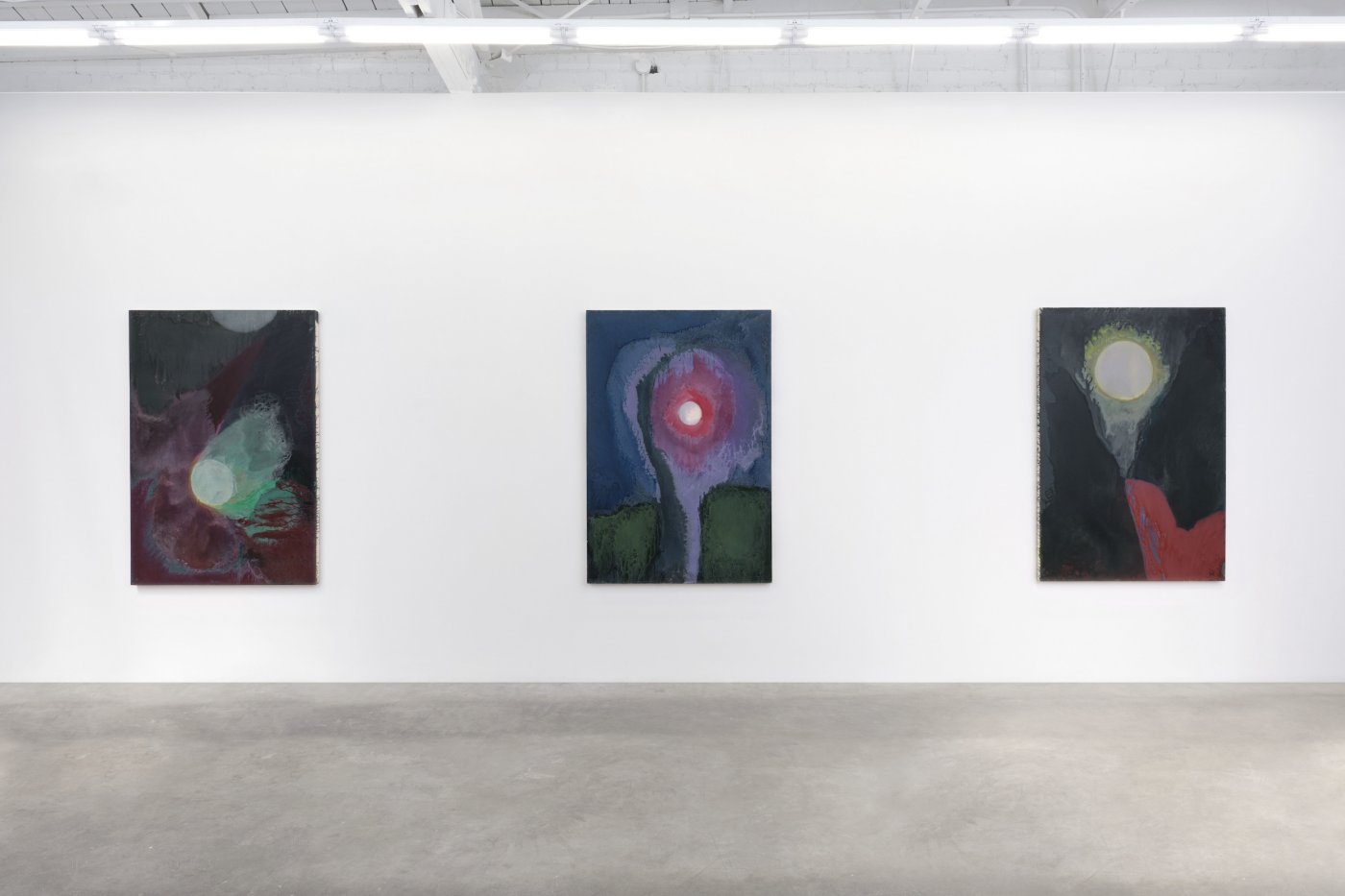 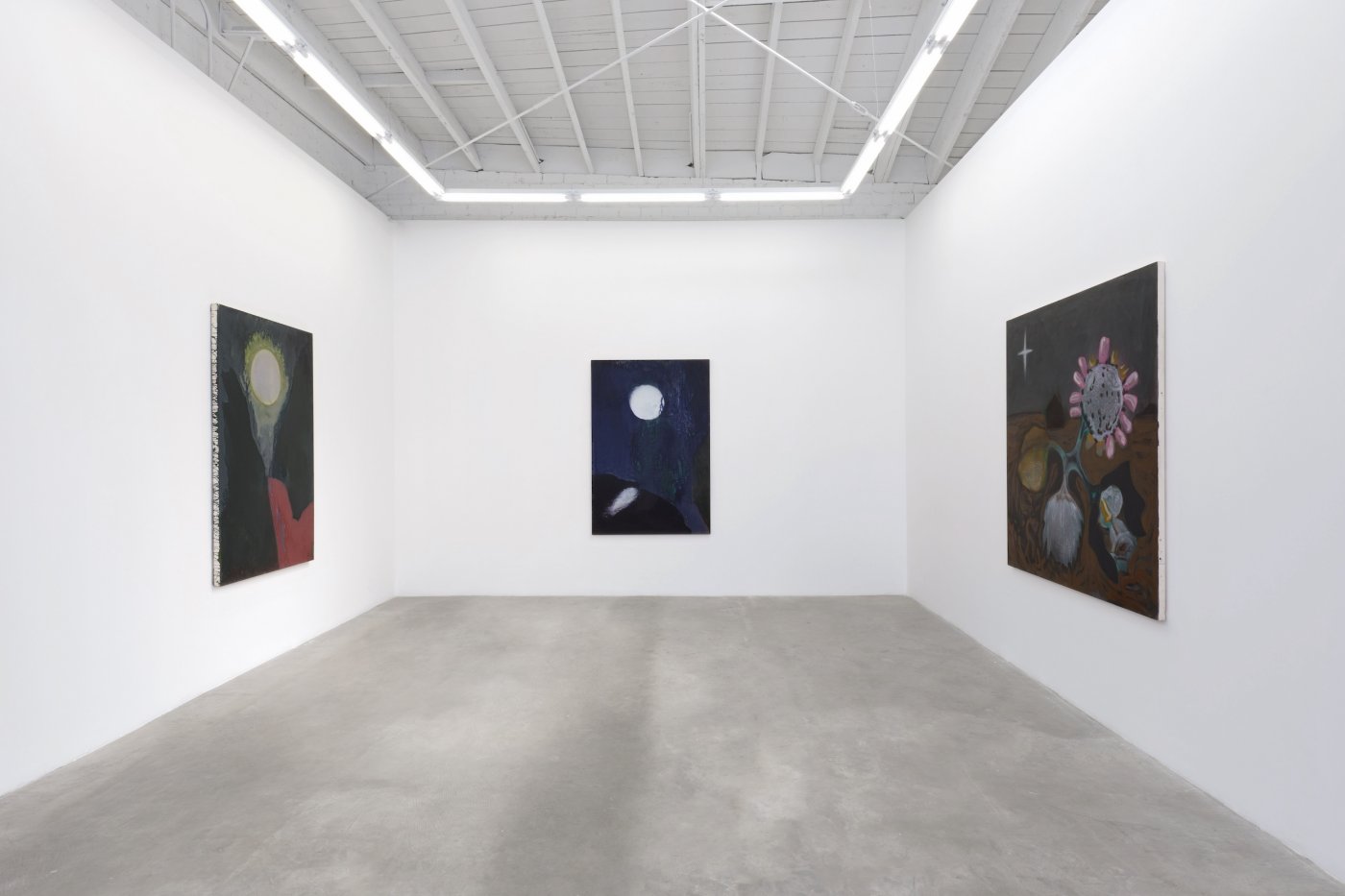 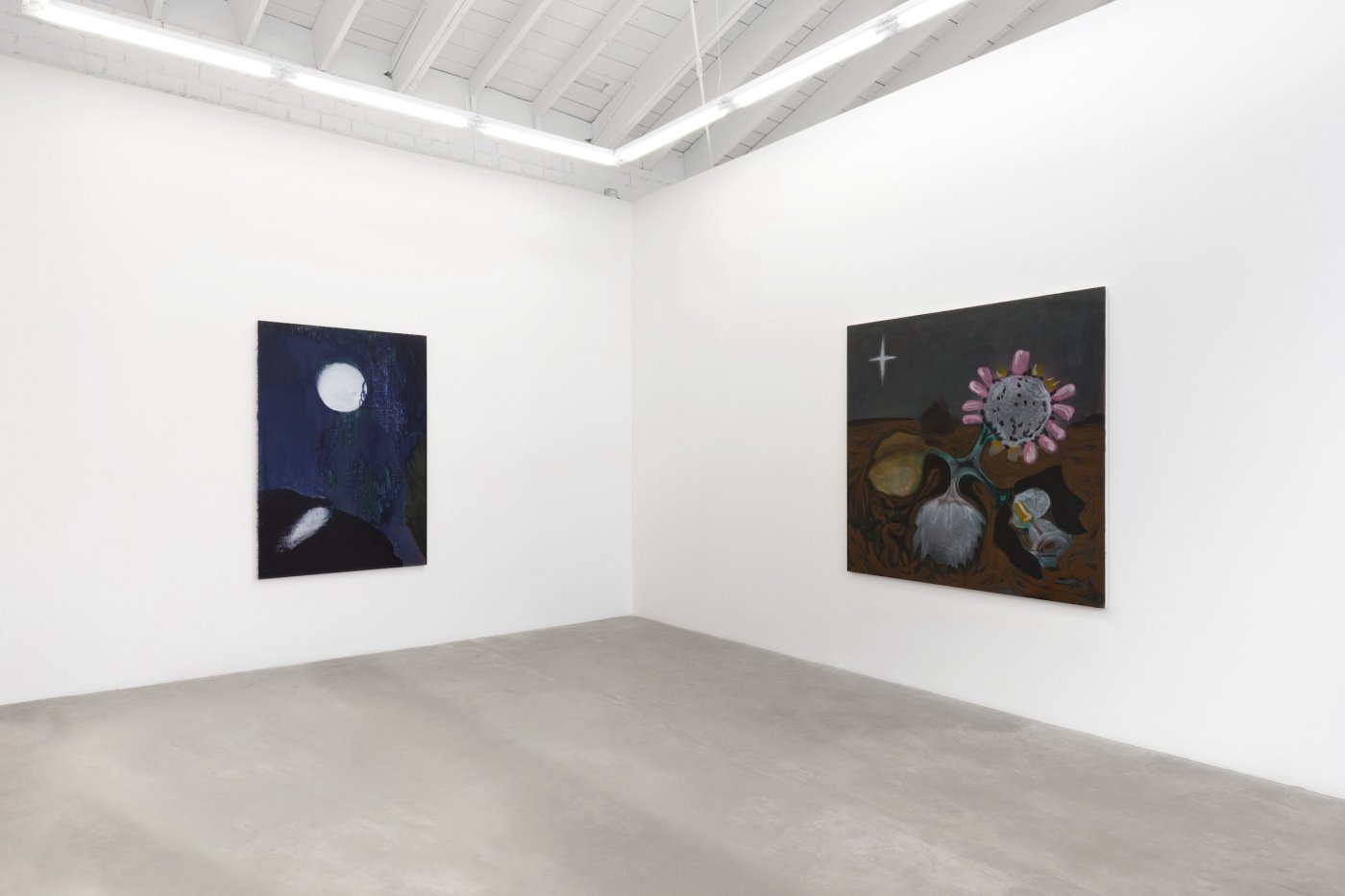 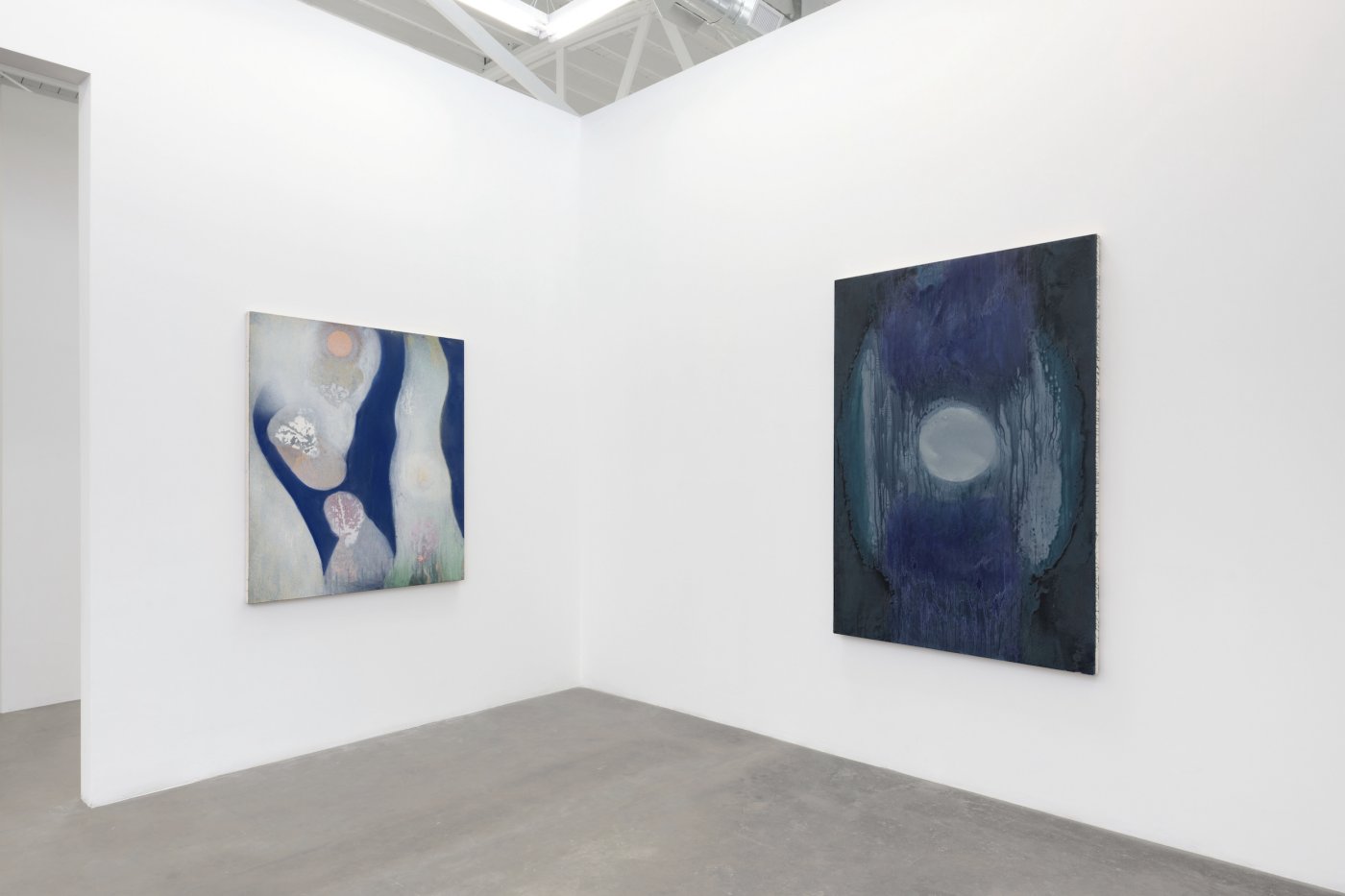 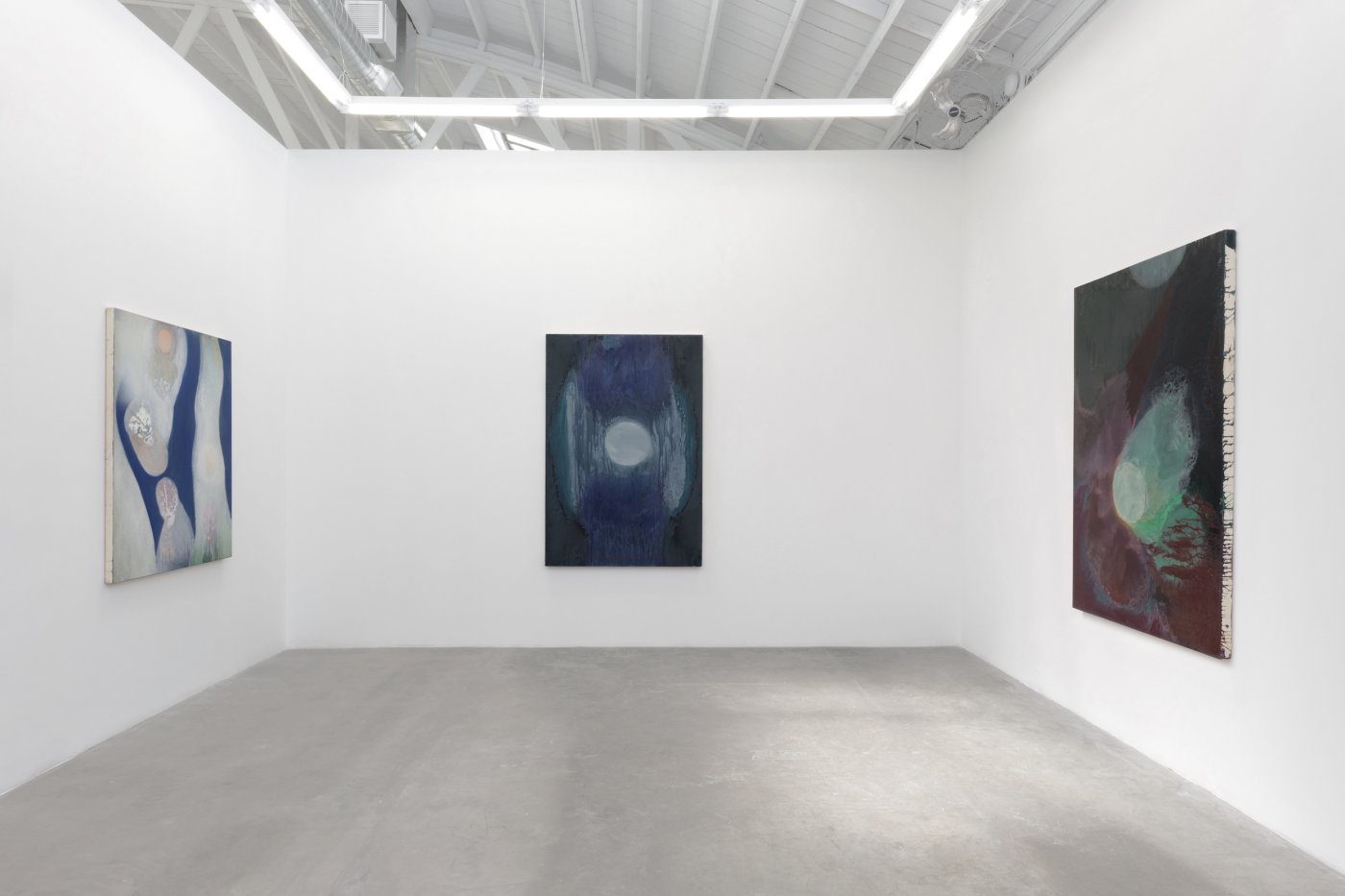 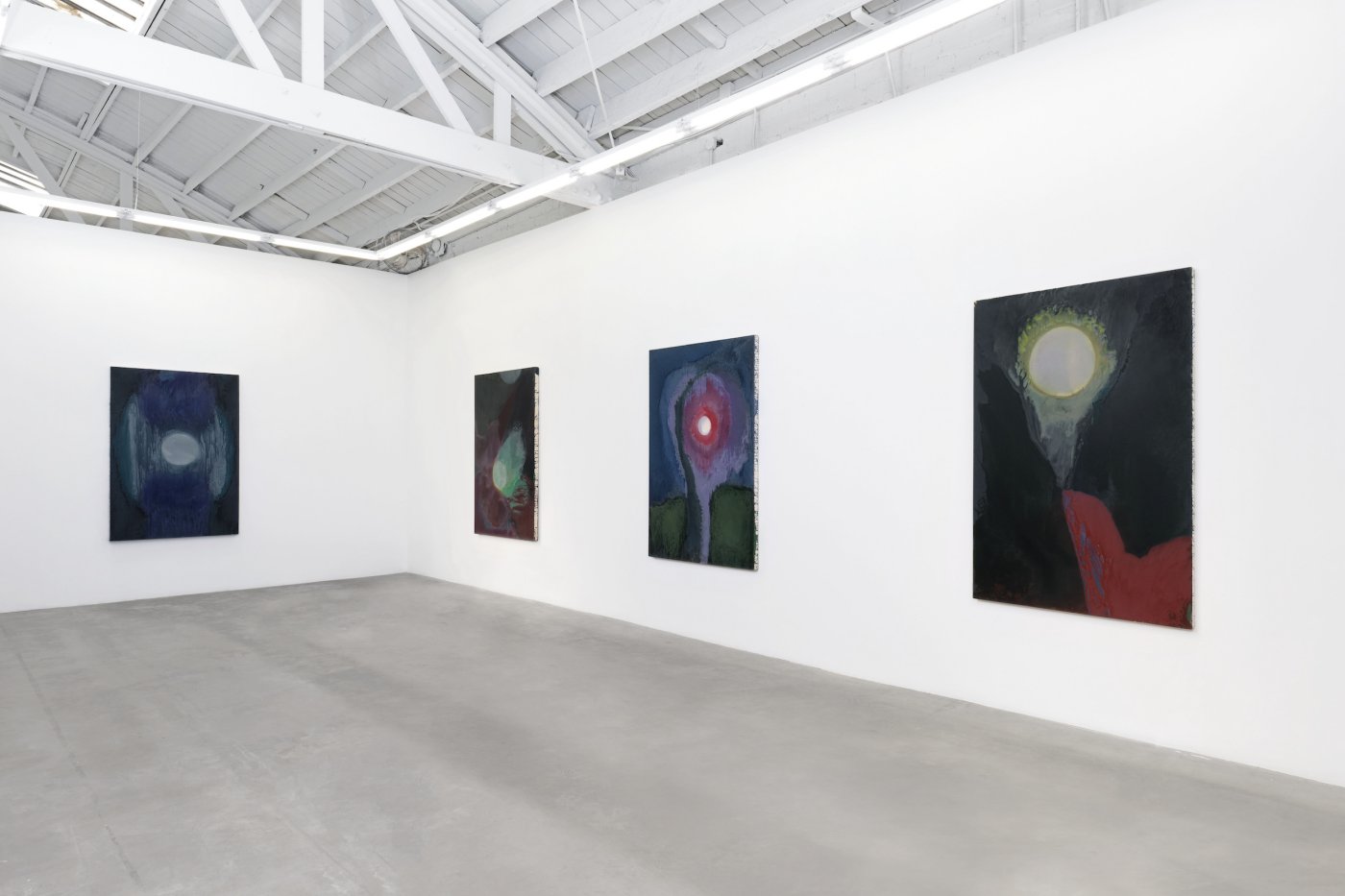 Moonshadow brings together the artist’s series of Moon paintings, painted between 2014 and 2020, for the first time. In a departure from her abstract practice, and a long career that encompasses performance, sculpture, painting, drawing, and sound elements, Evans’ cosmic paintings take inspiration from the sublime forces of nature which the artist has experienced throughout the course of her life in California, from her upbringing in California’s expansive and fertile Central Valley, to the raw and rugged Pacific Ocean coastline, and the high desert landscapes of Joshua Tree and Yucca Valley.

Influenced by Charles Burchfield’s hallucinatory and vibrant perspective of the natural world, Evans pours paint directly onto the canvas allowing the pools of paint to form the compositions organically rather than preconceiving the landscape herself. In this process, edges merge and overlap, and the resulting scenes are romantic and metaphysical. Mysterious and ghostly Supermoons in shades of orange, red, and blue emanate rays of light onto deserted environments. A lone nightshade glowing with nocturnal pensiveness dominates its rural backdrop.

In many spiritual traditions the moon represents the divine feminine, the Mother, and is associated with enlightenment and illumination, and the realm between the conscious and the unconscious. It is believed to represent insight and intuitive knowledge. Thus, as a symbol of the soul, the imagery that emerges within these landscapes serves as a visual metaphor for the nation and the world’s consciousness and the tense political situation that humanity finds itself in today. Like the phases of the moon, it may symbolize eternity and enlightenment or the dark side of nature and the decline of life.

Nancy Evans is a multidisciplinary artist engaging in performance, sculpture, painting, and drawing. She received her BFA from the University of California, Berkeley. Her work has been exhibited at the Art Center College of Design, Pasadena, CA; Torrance Art Museum, Torrance, CA; Oceanside Museum of Art, Oceanside, CA; Pasadena Armory Center for the Arts, Pasadena, CA; San Jose Museum of Art, San Jose, CA; among others. She has received grants and awards from the Center for Cultural Innovation, the Joan Mitchell Foundation, the Rockefeller Foundation, and the National Endowment for the Arts. Her work has been featured in publications including Artforum, Art in America, Los Angeles Magazine, LA Weekly, and the Los Angeles Times. Nancy Evans lives and works in Venice, CA.