To book an appointment to visit the exhibition in person, please click here.

James Cohan presents an exhibition of work by Monir Shahroudy Farmanfarmaian. The exhibition spans both of the gallery’s locations, with a presentation of two major sculptural series in Tribeca and a selection of the artist’s geometric drawings and Convertible sculptures in the Lower East Side. This is the late artist’s first exhibition with James Cohan. 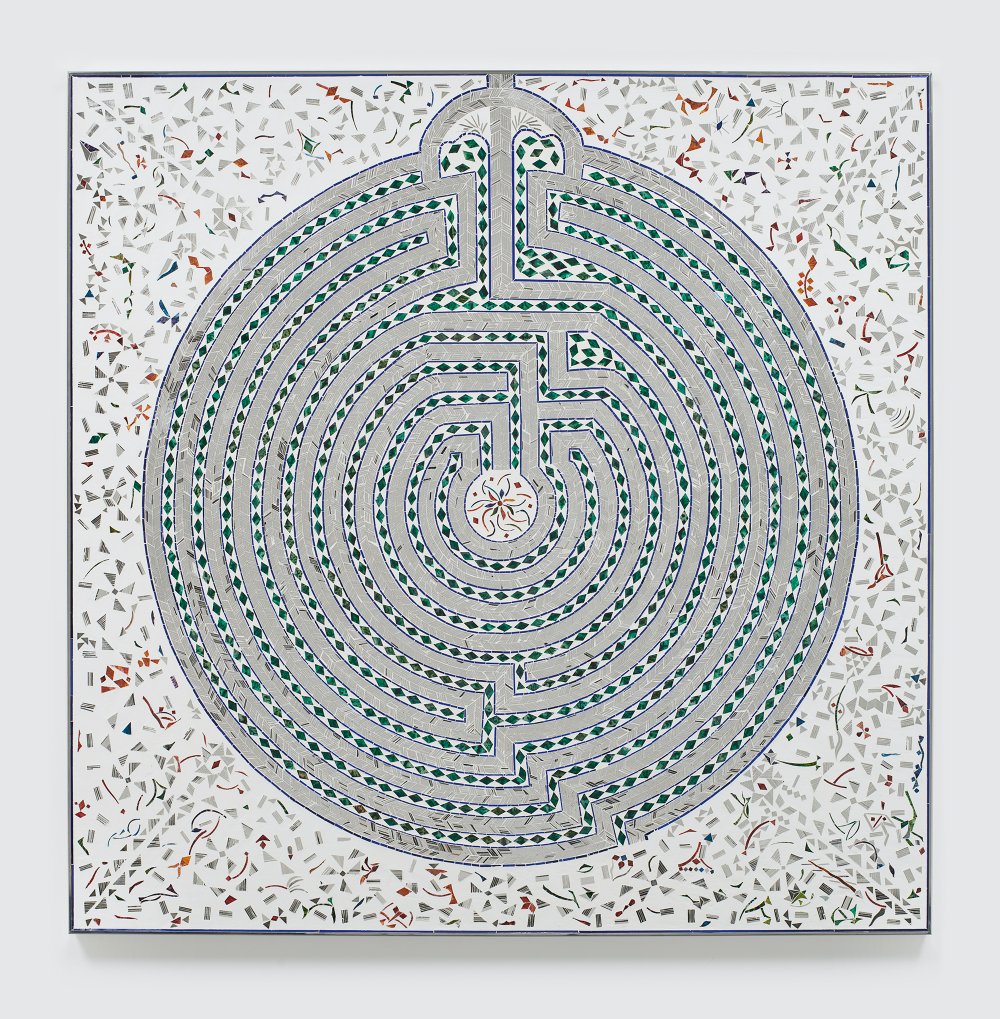 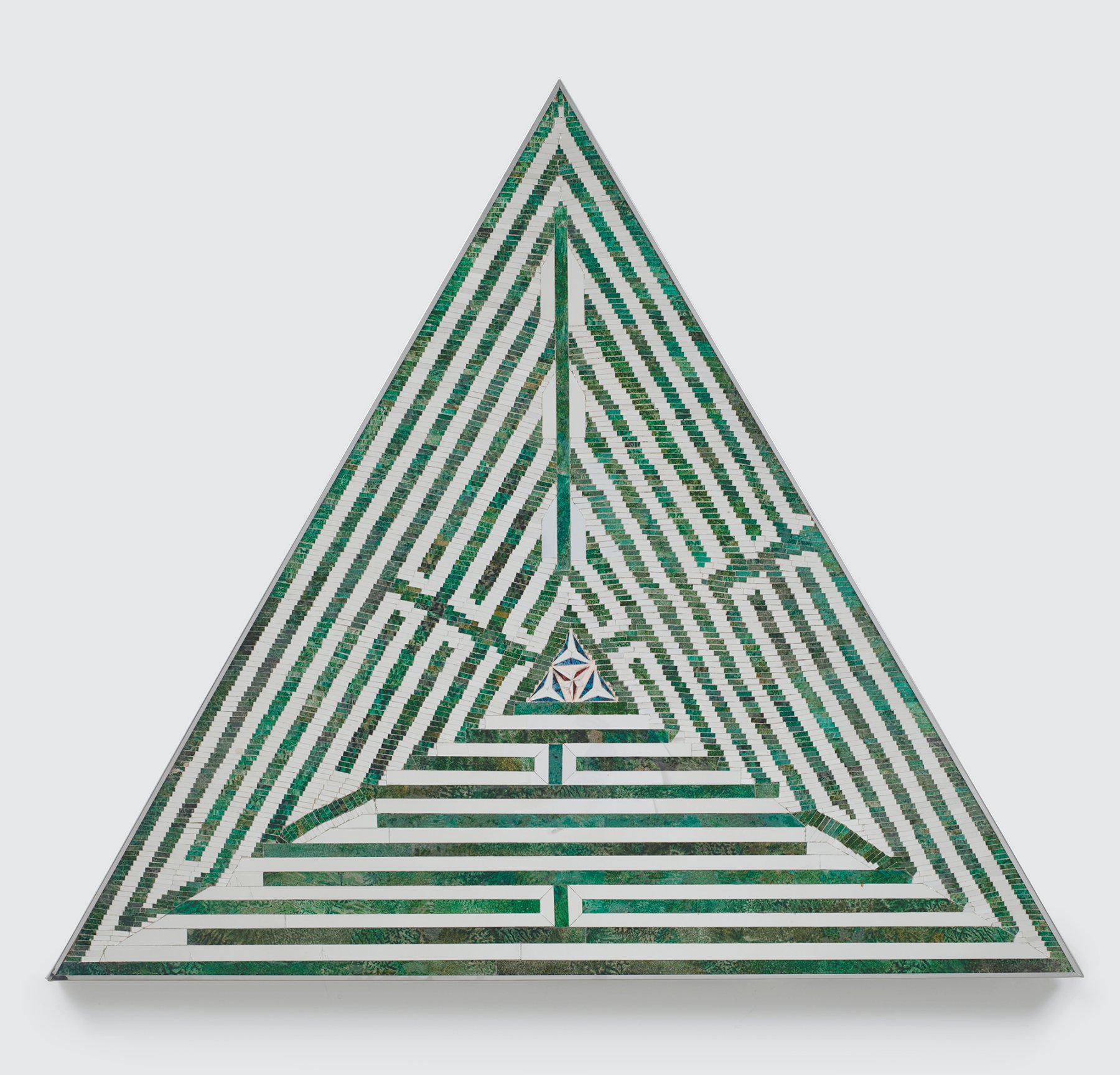 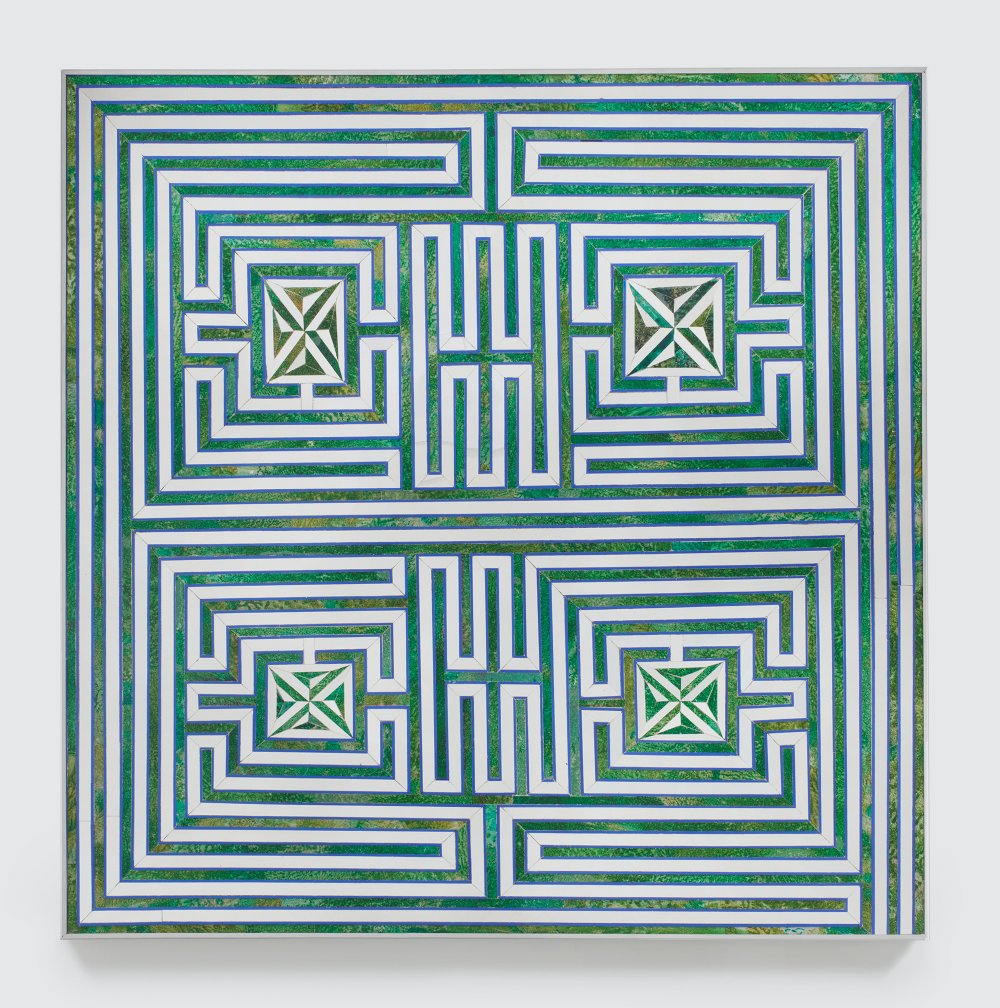 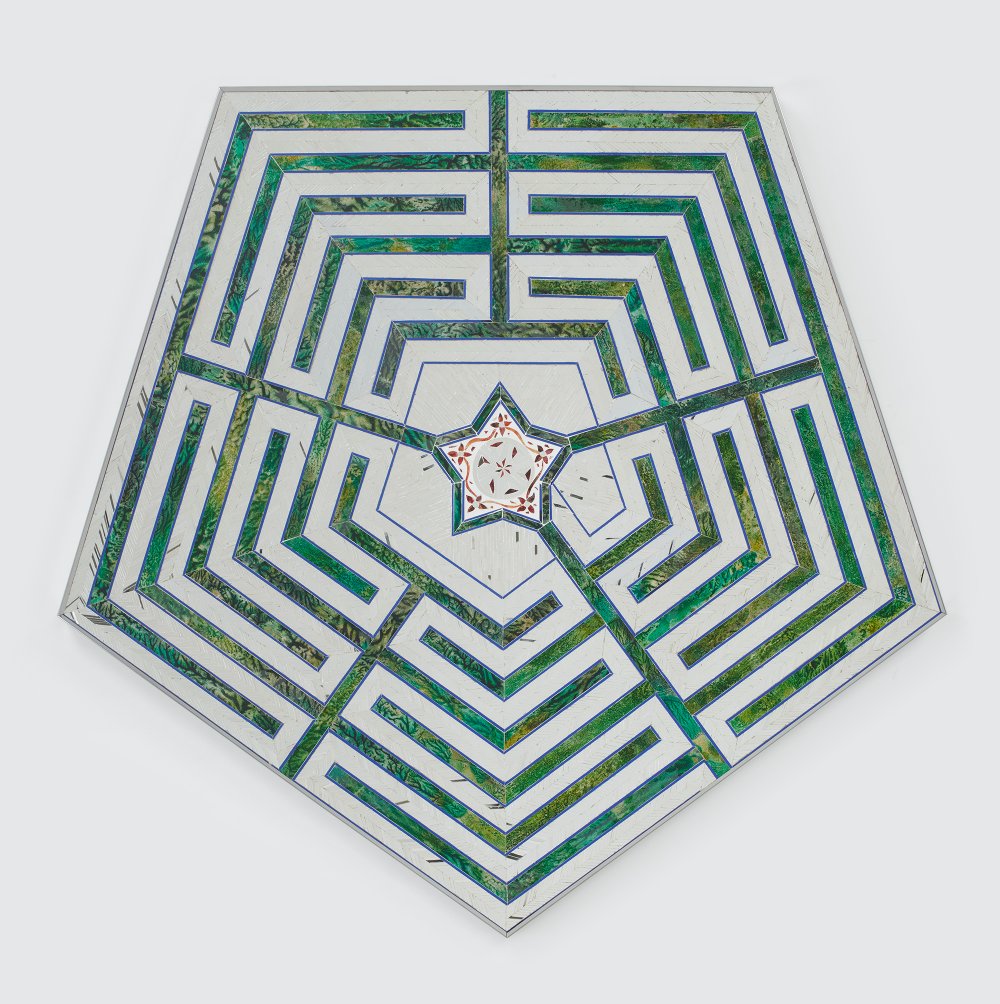 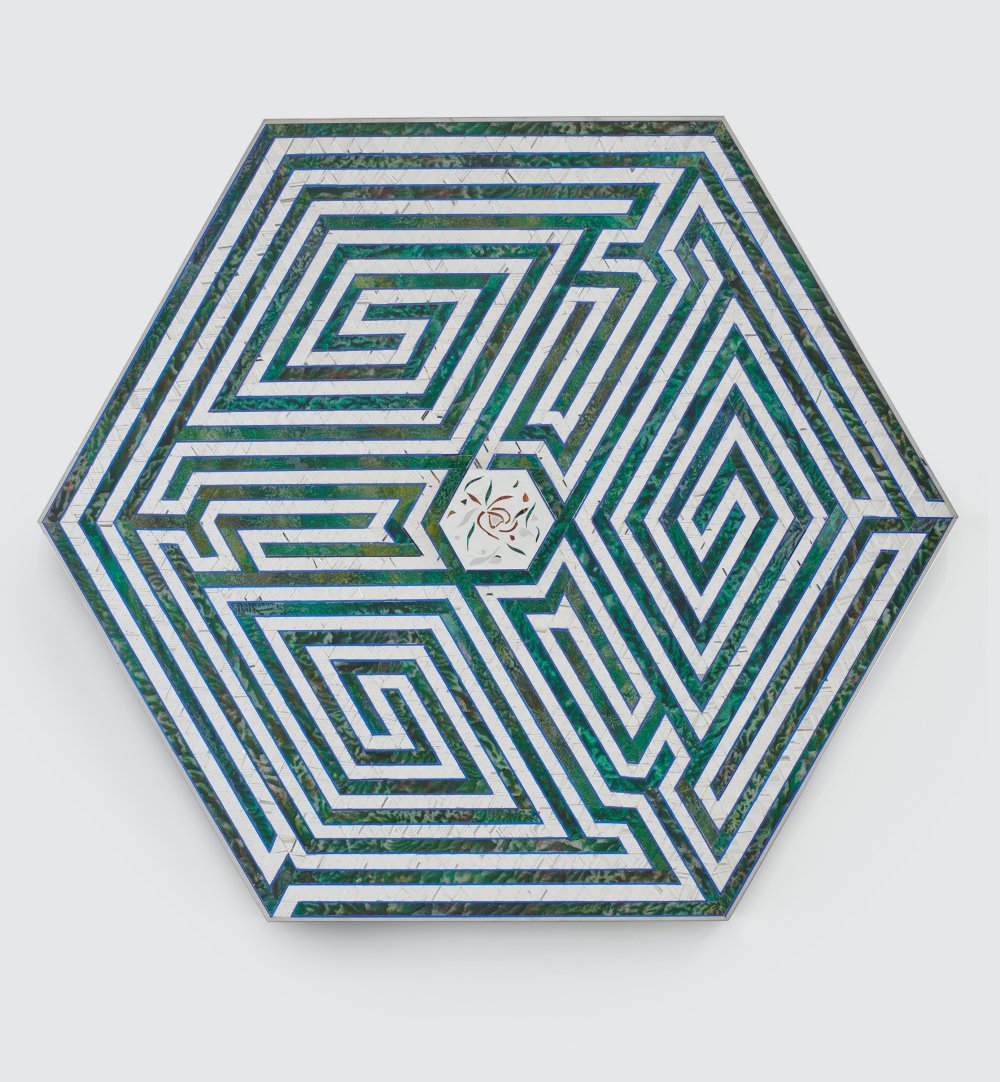 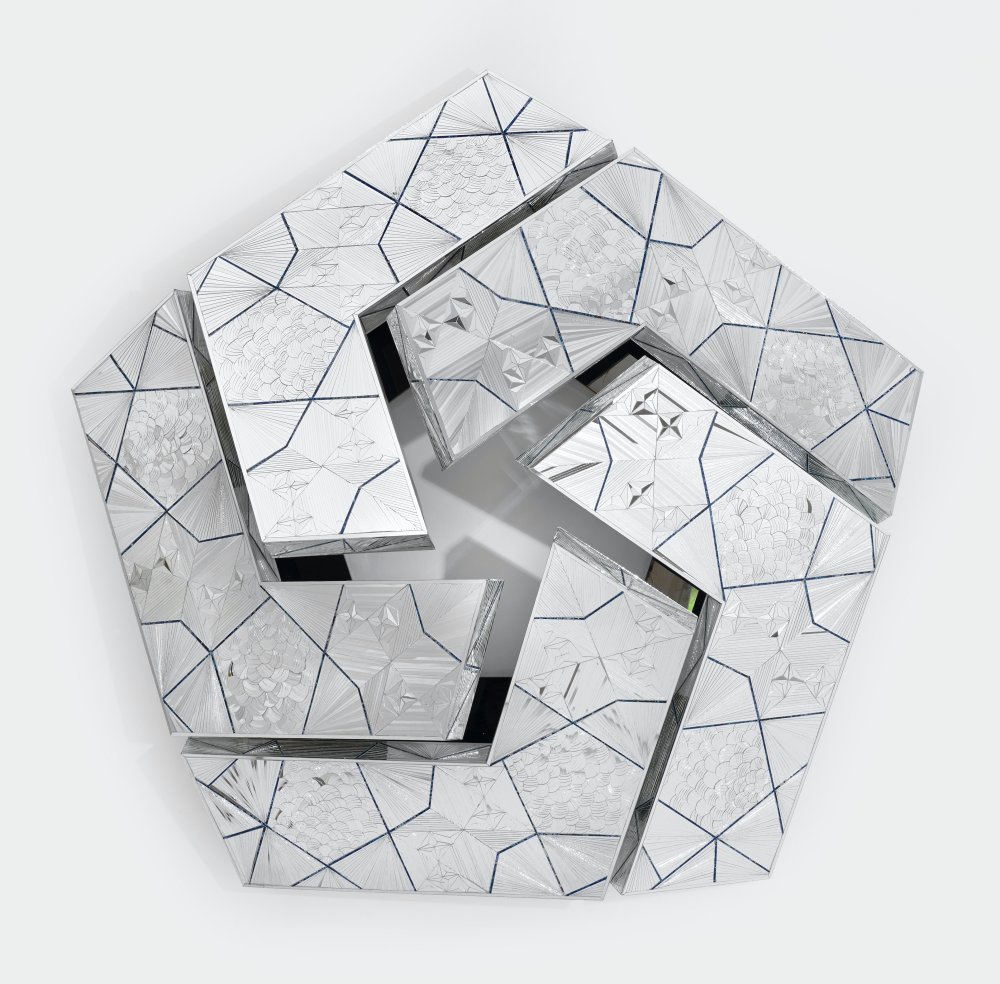 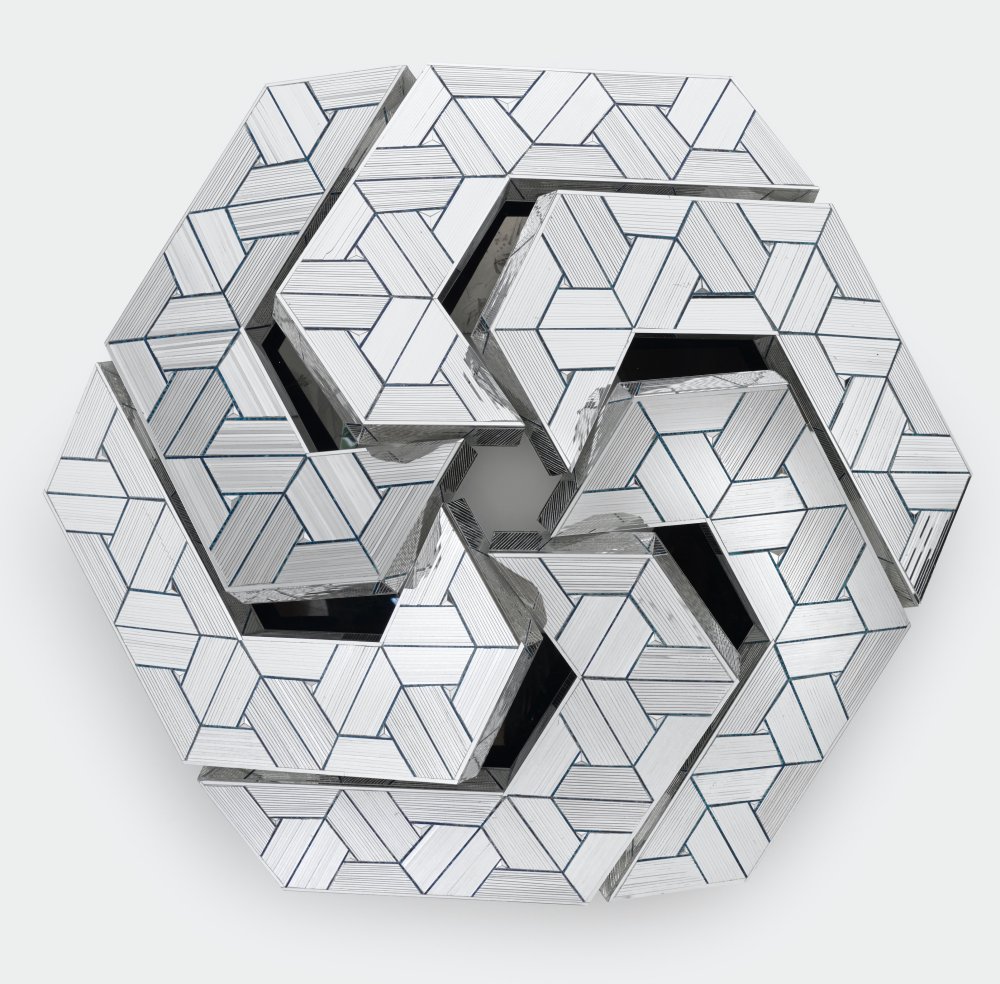 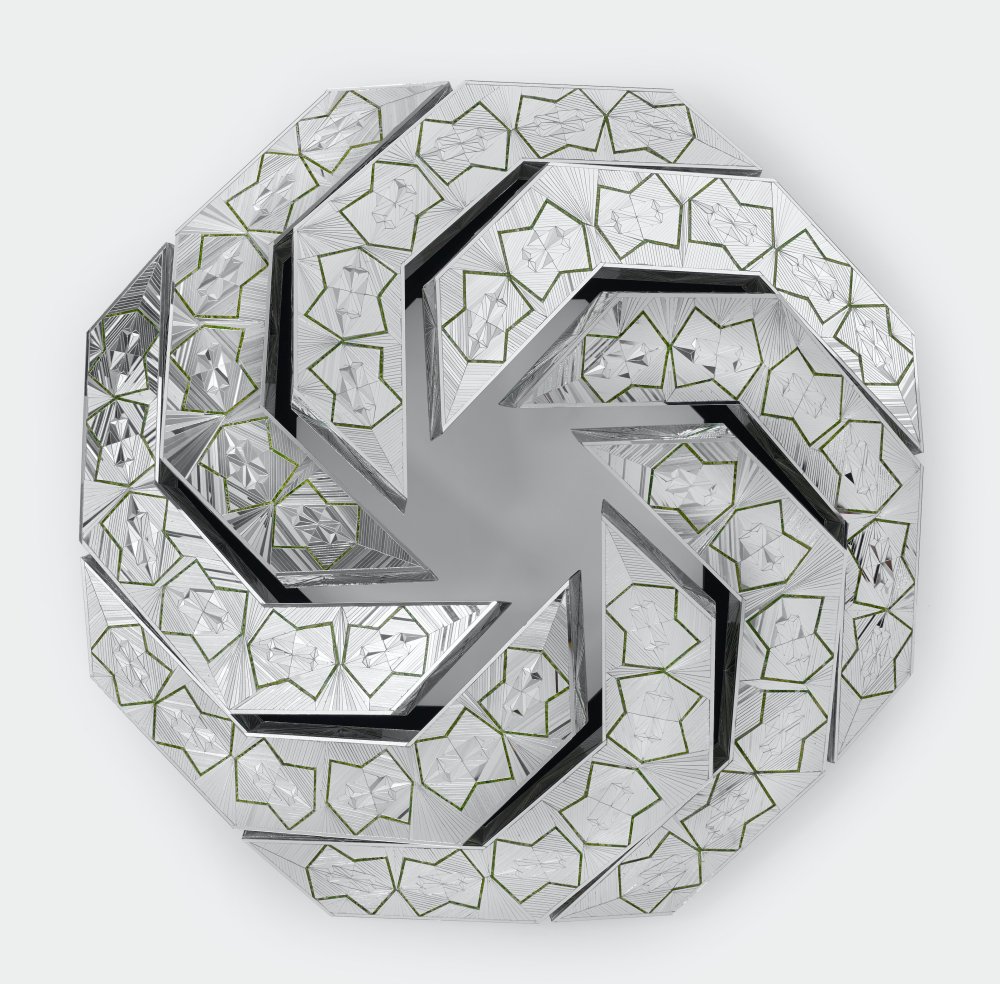 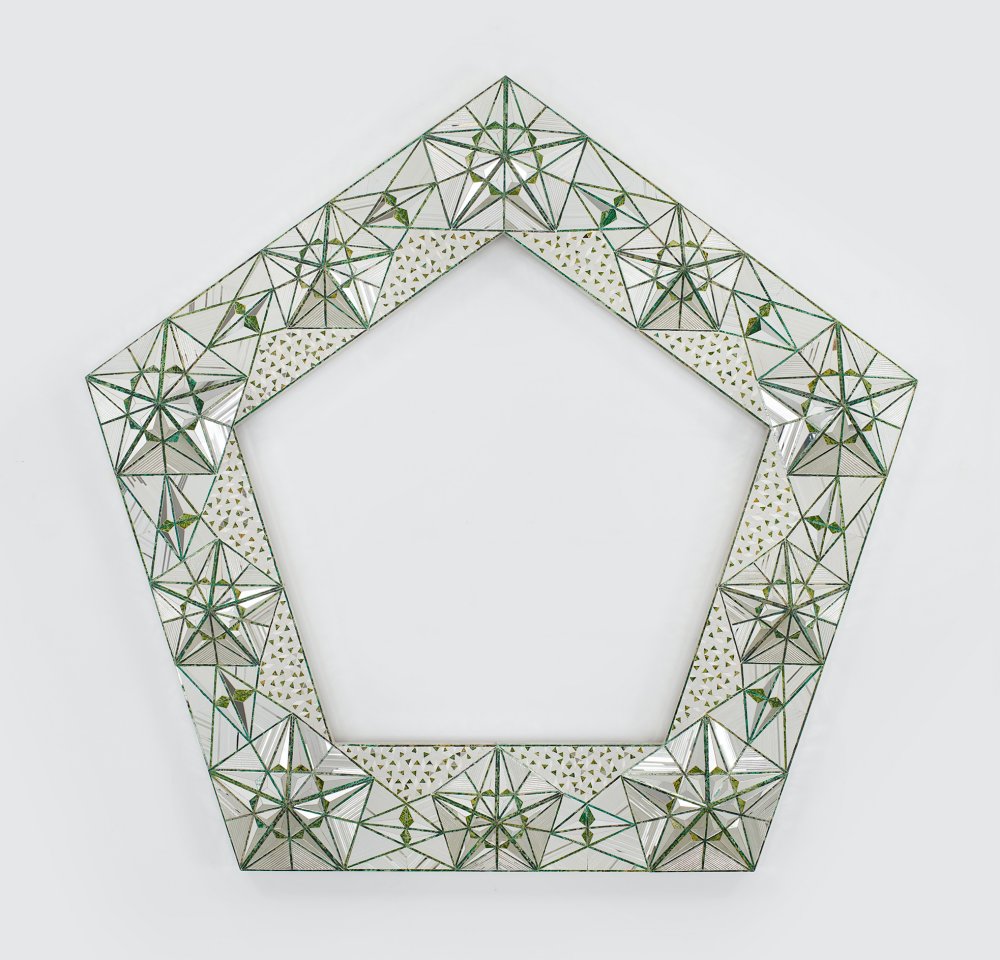 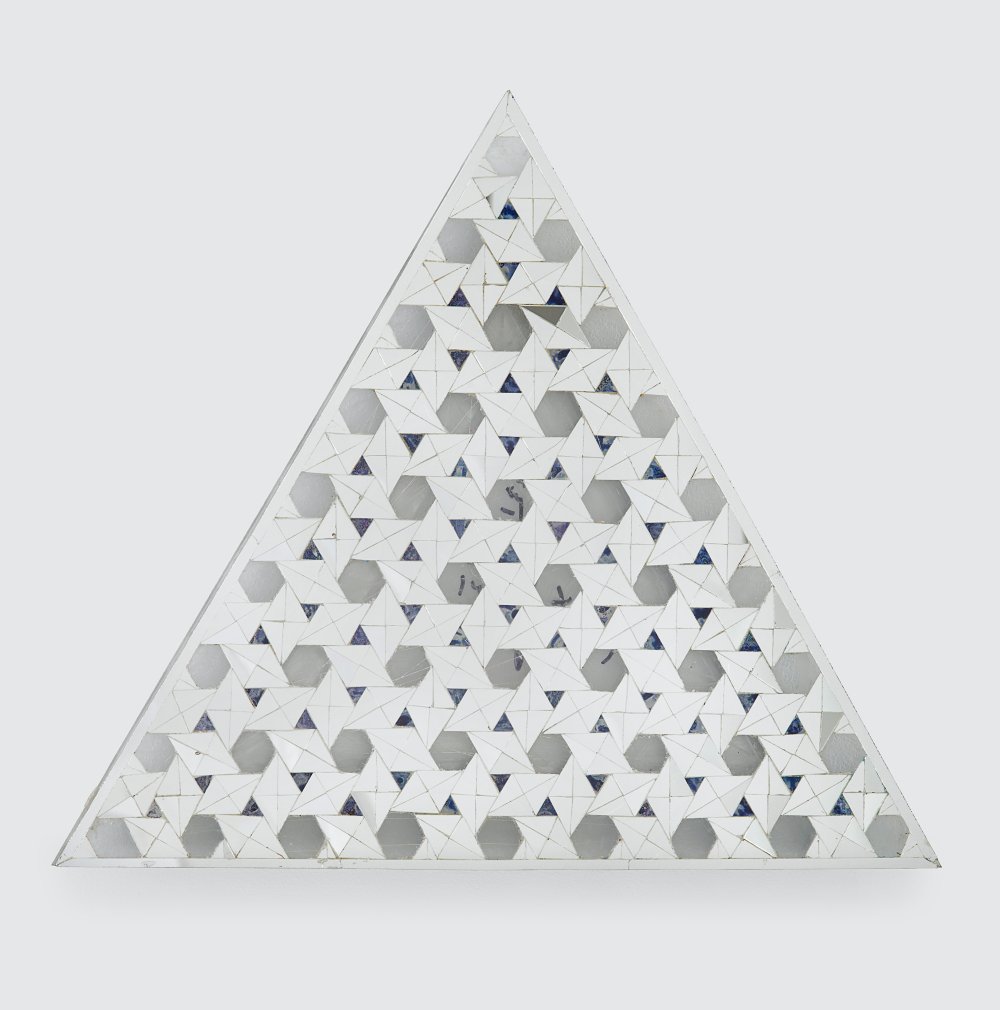 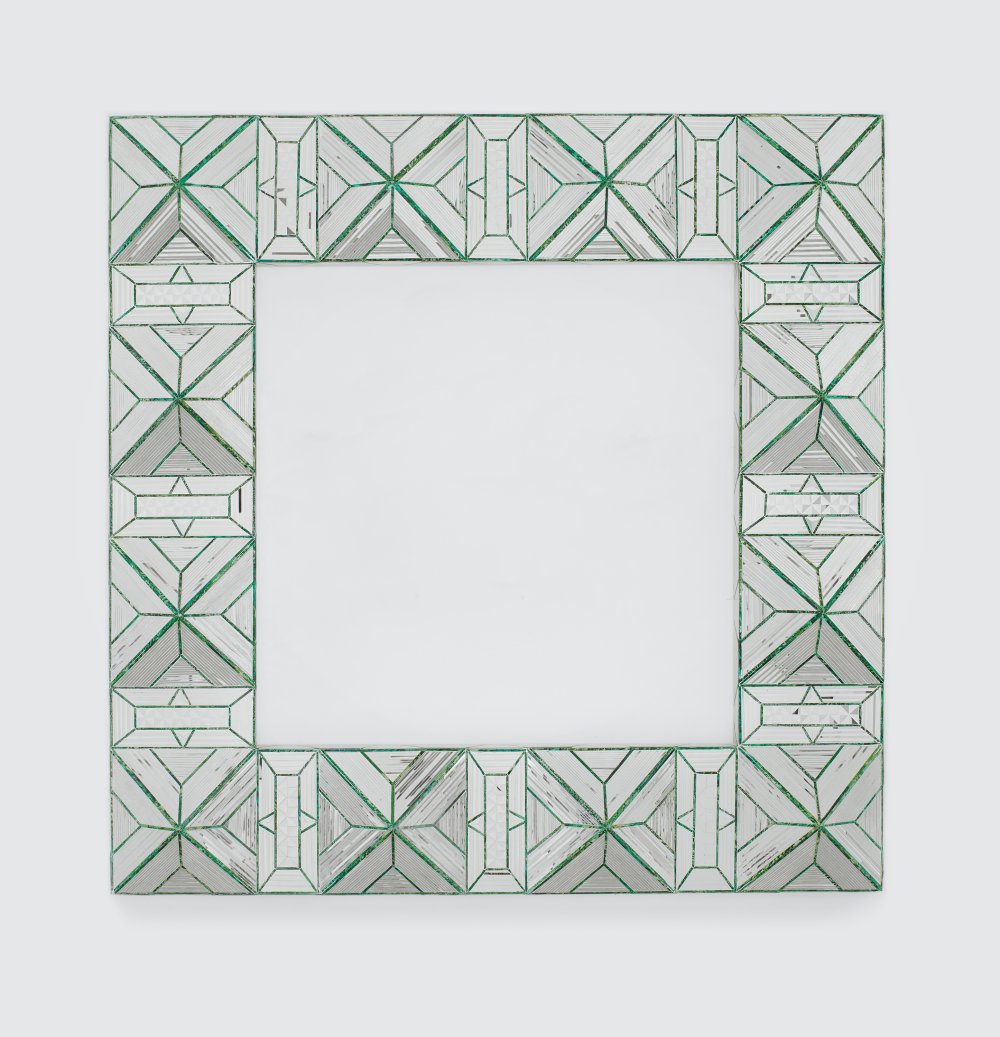 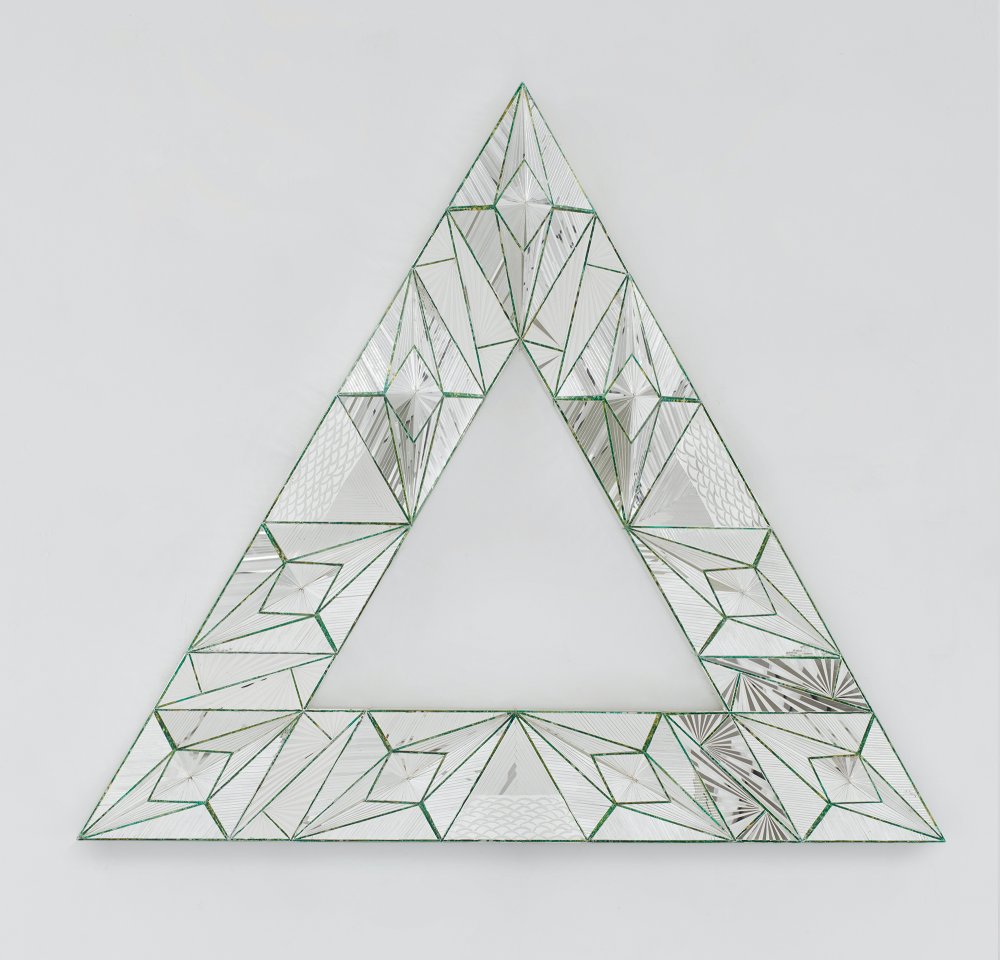 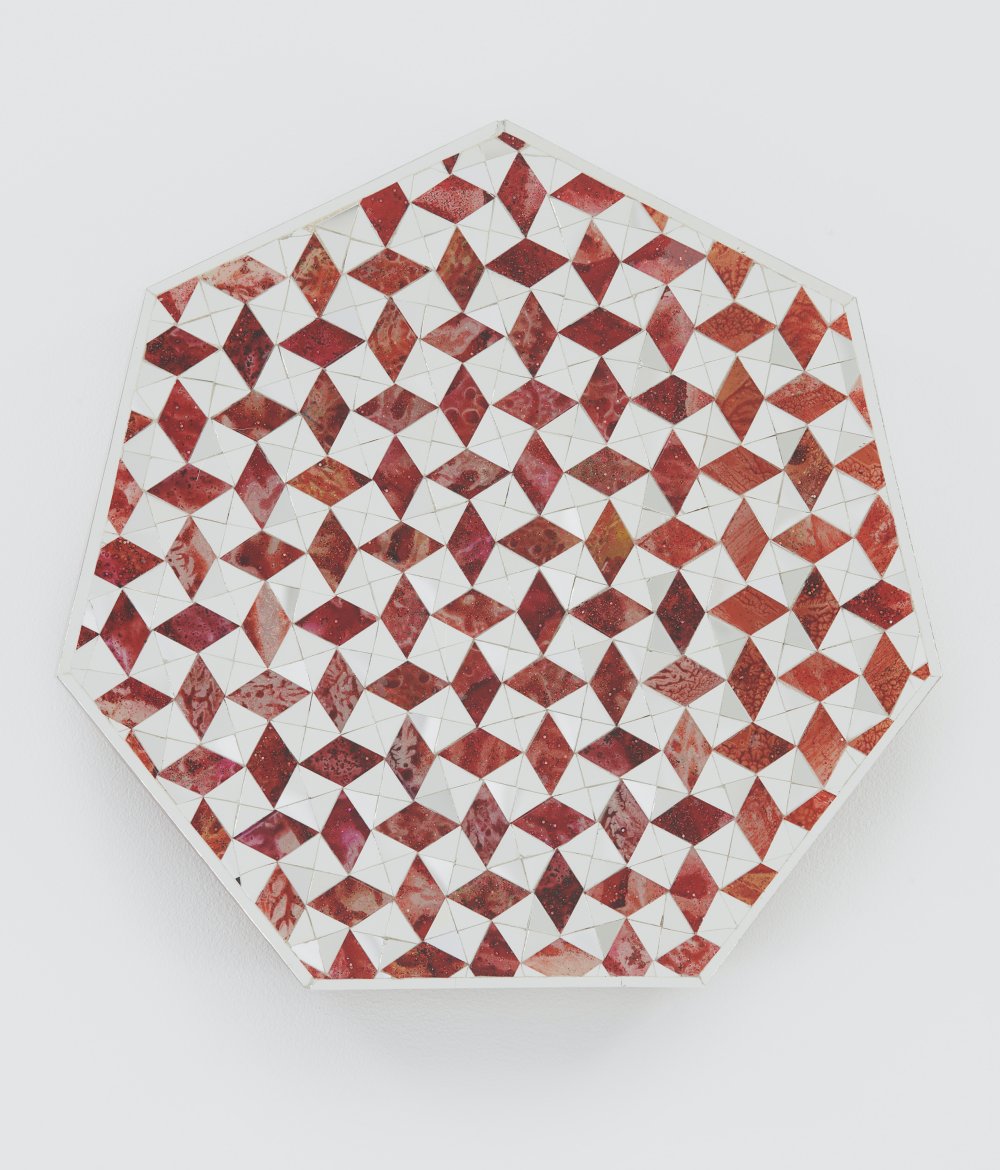 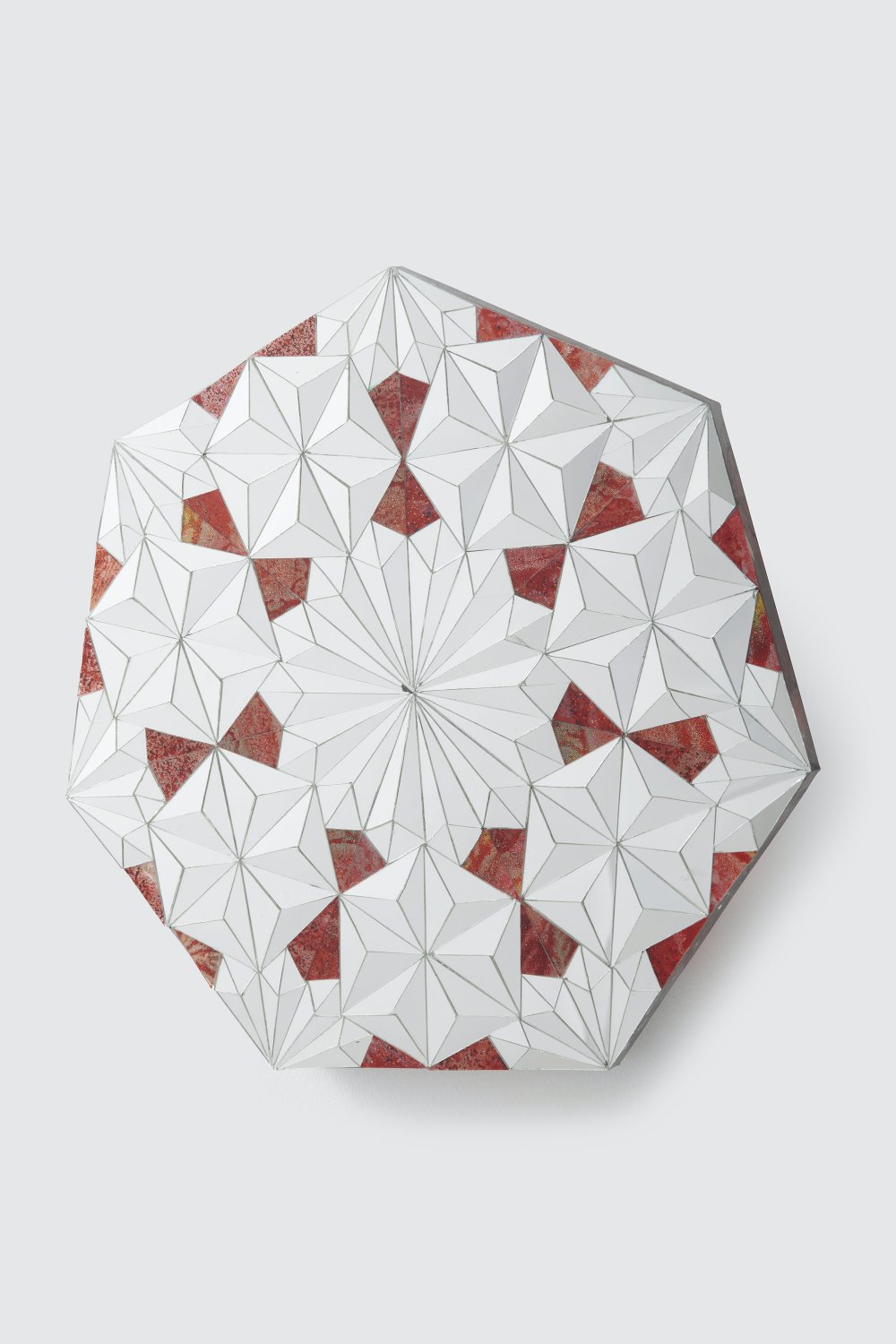 Over six decades, Monir Shahroudy Farmanfarmaian (1922 – 2019) investigated the intricate geometries of her Iranian heritage, reconfiguring traditional craft techniques to explore the philosophical, poetic, and perceptual possibilities of interlocking primary forms. In her work, rigorous structure and repetition are the foundations of invention and limitless variation. Spanning mirrored mosaics, sculptural assemblage, drawings, textiles and monotypes, Monir’s multidimensional practice centered on incorporating elements from her inherited past into her own designs—which blended a range of compositional influences, from classical Persian interior decoration to Western modernism.

Monir is best known for her geometric mirror-works, in which cut polygonal fragments of reverse-painted, reflective glass are arranged into kaleidoscopic compositions grounded on principles of Islamic geometry. Tied to a mystical understanding of primary shapes as sacred and connected to a divine natural order, her unit-based compositions of luminous glass reveal uniformity, repetition, and precedent as the basis for endless recombination. This two-part exhibition brings together major mirror-mosaic works and related geometric drawings from the prolific period following Monir’s return to Iran in 2004.

On view at the Tribeca gallery are five major Maze works: Triangle Maze, Square Maze, Pentagon Maze, Hexagon Maze (all 2014), and Untitled Maze Work (2015). In these sculptures, the traditional surface of the mirror-mosaic is dissected and reassembled into a maze form, opening up spatial arrangements drawn from architectural convention to new possible interpretations. For Monir, the luminous reverse-painted glass pathways in these wall-based sculptures invoke the mazes of Persian gardens as well as the extravagant hedge labyrinths of English and French estate gardens. Her Maze works incorporate sacred geometries to give meditative, physical expression to the Farsi adage Hameesheh yek raah hast—“there is always a way”—inviting the viewer to discover their way in and their way out of the path laid out by the artist.

Monir often grouped her work in series she called “families,” suggesting a familial and conceptual affinity of form, dimensionality, or structure between works in each group. Each family comprises eight sculptures, which begin with the fundamental form of the triangle and progress through the remaining seven regular polygons in Euclidean geometry.
In the central gallery, three exemplary works from Monir’s Fourth Family (2013) are each anchored by central, multi- sided linear shapes whose features define an outward-spanning tessellation of form. Like the sequence of Maze works in the previous gallery, Fourth Family Pentagon, Fourth Family Hexagon, and Fourth Family Octagon unfold in a progression of geometric complexity, each subsequent form composed of more facets and more angles.

The Convertible sculptures on view in Tribeca marry Monir’s enduring interest in repetition and seriality with explorations into modularity and permutability. Each wall-based mirror work is composed of segments that can be assembled in myriad patterns, folded and unfolded according to diagrams drawn by the artist—some based on extant decorative patterns, and others of her own invention. In Monir’s own words, they enable her to “play with ideas of infinity.” Khordad – Convertible Series (2011) is named for the third month of the Persian solar calendar, a timekeeping system that begins each year on the vernal equinox. The work is composed of four individual forms that each suggest the sinuous trefoil arches of early Islamic architecture. Reflection Five (2010) is a wall-based sculpture that consists of one central rhombus and four identical square-shaped forms which, in the Islamic tradition, symbolize North, South, West, and East. By organizing the forms according to her own design, and invoking concepts central to Minimalism such as modularity, the shape’s axes are complicated, demonstrating the fluidity and generative potential of geometric structure.

With Installation of 9 elements (2004), on view at the Lower East Side gallery, Monir employs diagrammatic organization to establish a spatial order between dissimilar, mirrored forms. Layering contemporary ideas with an Islamic integration of mathematics, bodily presence, and spirituality, this immersive installation work reconnects 20th century abstraction with its theological roots to invite sublime perceptual experience grounded in the body of the viewer. Monir explained in a conversation with Hans Ulrich Obrist, “With the reflections, you’re also a part of the art piece. Your own appearance, your own face, your own clothing—if you move, it is a part of the art. You’re the connection: it is the mix of human being and reflection and artwork.”

Exhibited alongside this nine-element installation are two mirror works whose shapes respond to Sufi mathematical principles, and a selection of historically significant drawings. Drawing was an integral throughline in Monir’s wide- ranging practice, providing a means for exercising dimensional thinking through experimentation with geometric structure. The drawings on view in this exhibition were created in the 1990s and 2000s, when Monir returned to Tehran after a 26-year period of exile in New York following the Islamic Revolution in 1979. Collectively, they demonstrate her decades-long, two-dimensional exploration of sculptural possibilities and sculptural production, as well as what curator Suzanne Cotter describes as the “intensely spatial nature of Monir’s artistic thinking.”