In an exchange between Dodie Bellamy and Kevin Killian that would have been called Eyewitness, had Kevin’s death from cancer not interrupted it, at one point Dodie writes: “I’m thinking of how Dennis Cooper said aids ruined death.” Not immediately (they reconnoiter the fact of Kevin’s diagnosis), but soon enough, Kevin, after taking a few beats, glosses Dennis’ epigrammatic observation. “Dennis’ point is that once we were in love with death in the Punk Era. It seemed like the real thing, the point of living. Then came aids,” Kylie Minogue’s most dedicated fan explained, “and death was reduced to nothing. Just the end. It was stripped of meaning.”

Once we were in love with death… Do you hear Keats’ nightingale in Kevin’s explanation? “I have been half in love with easeful death, call’d him soft names…” Who hasn’t called certain darkling attractions by soft names? Sometimes you live to regret it, sometimes you don’t. 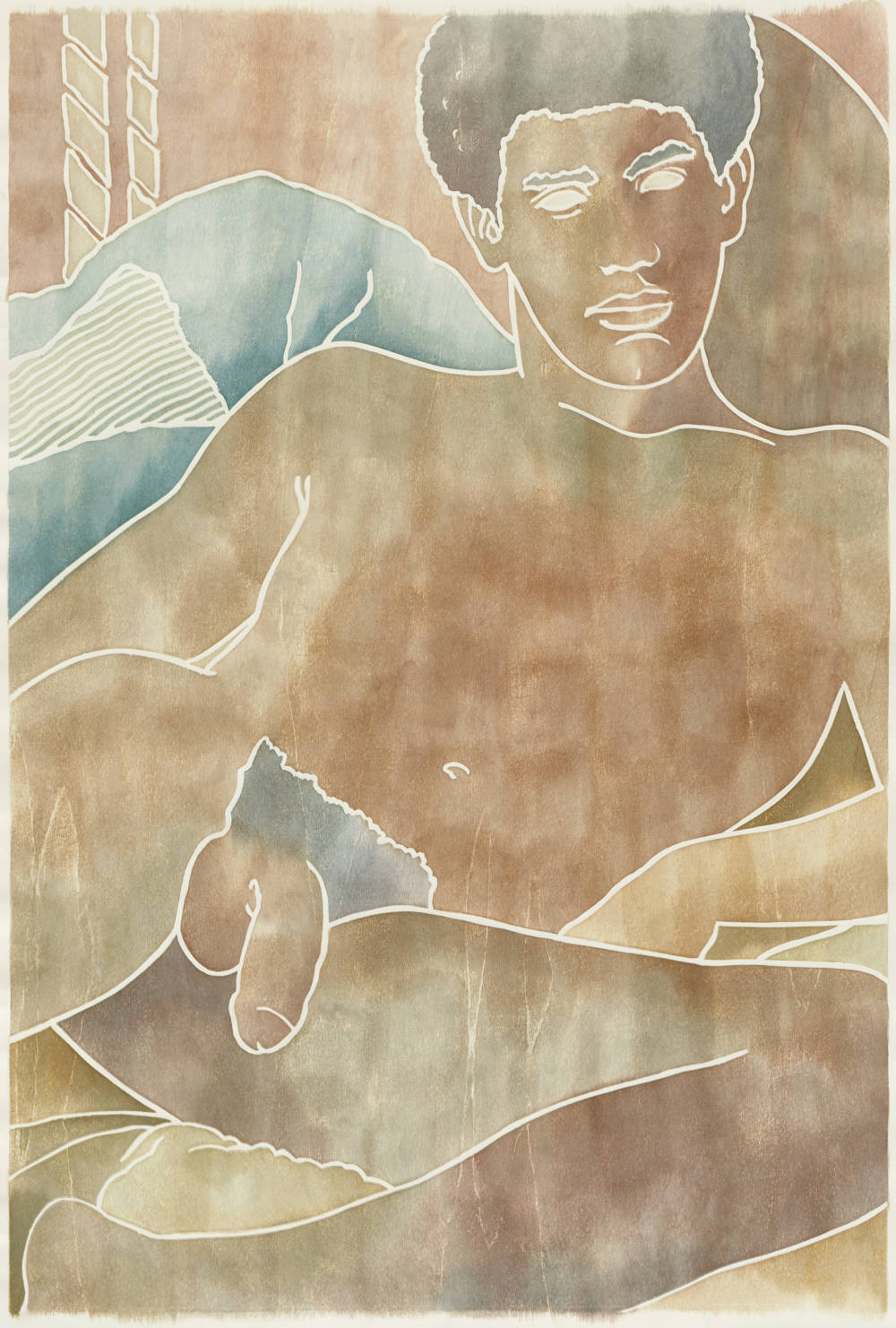 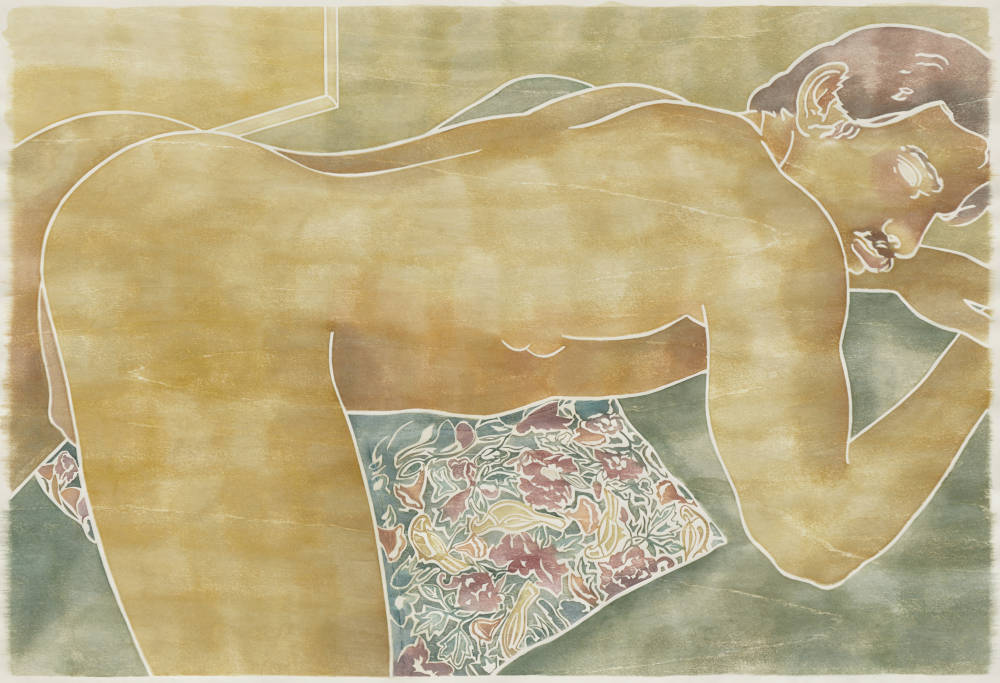 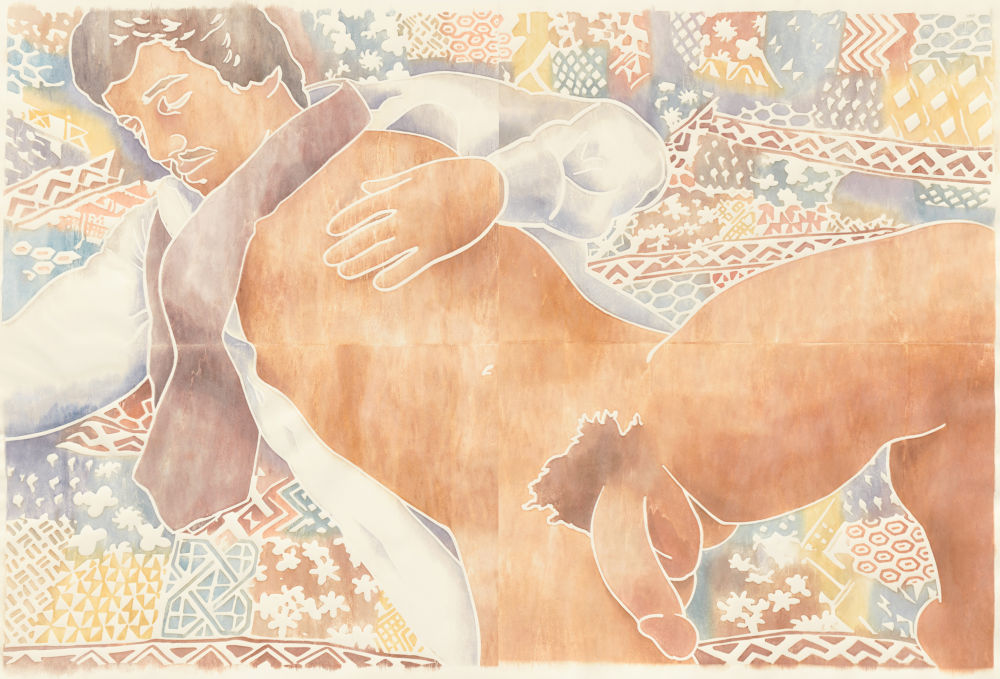 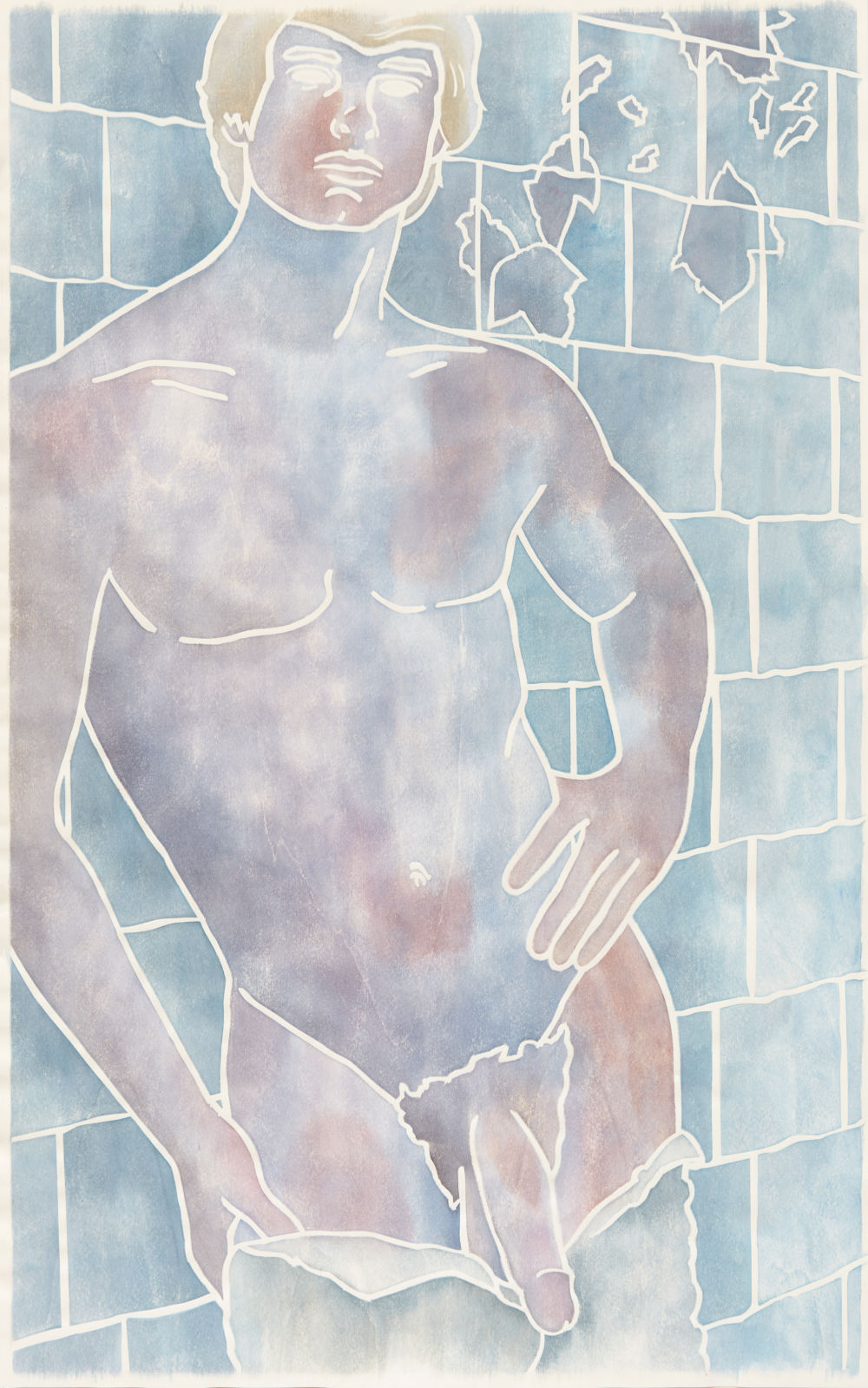 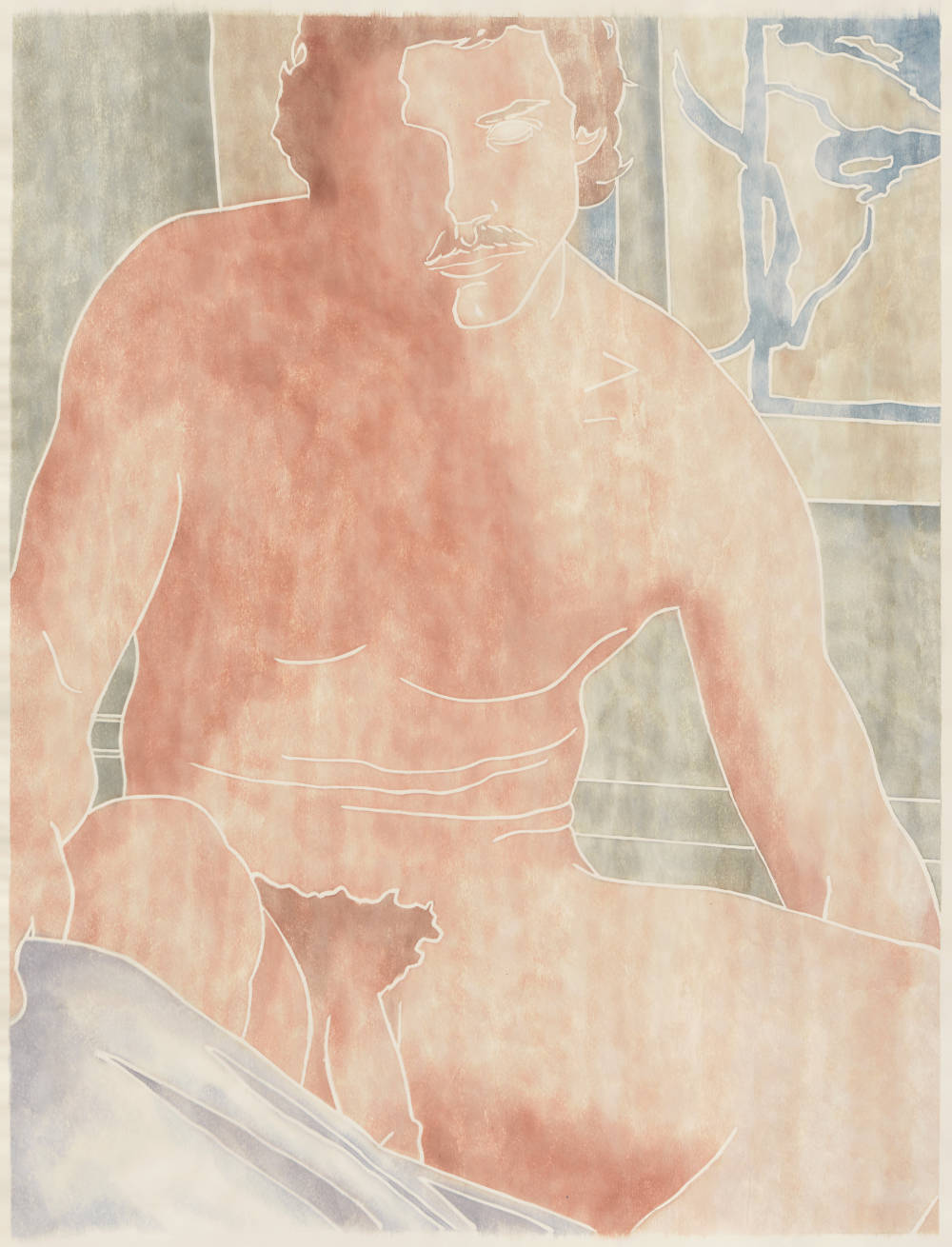 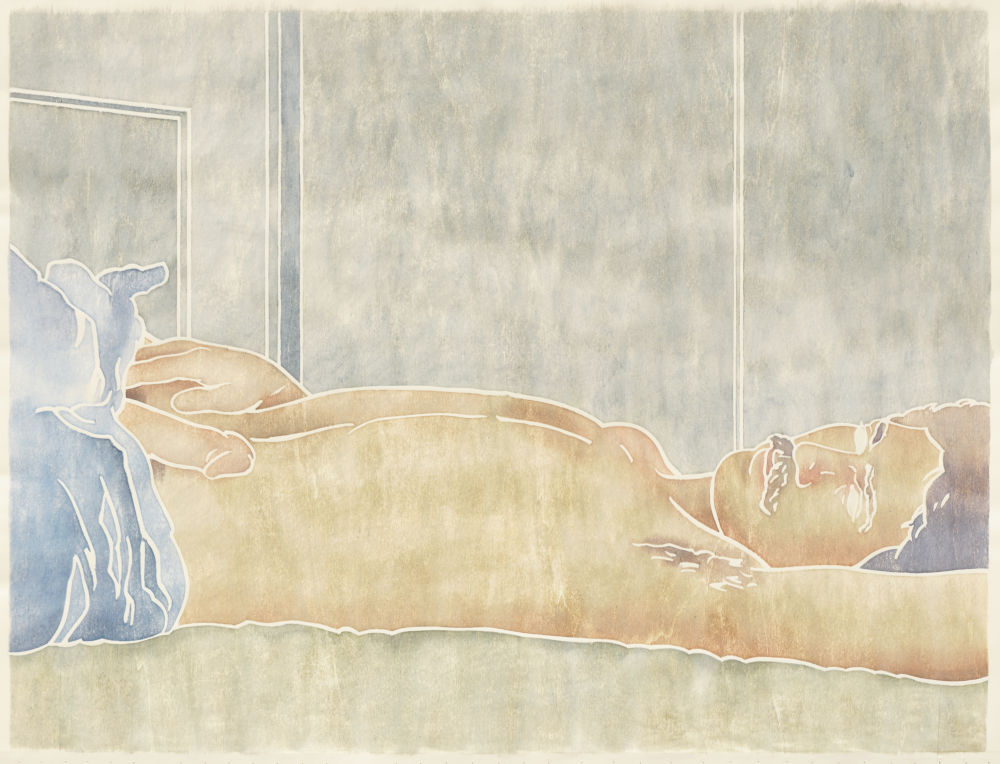 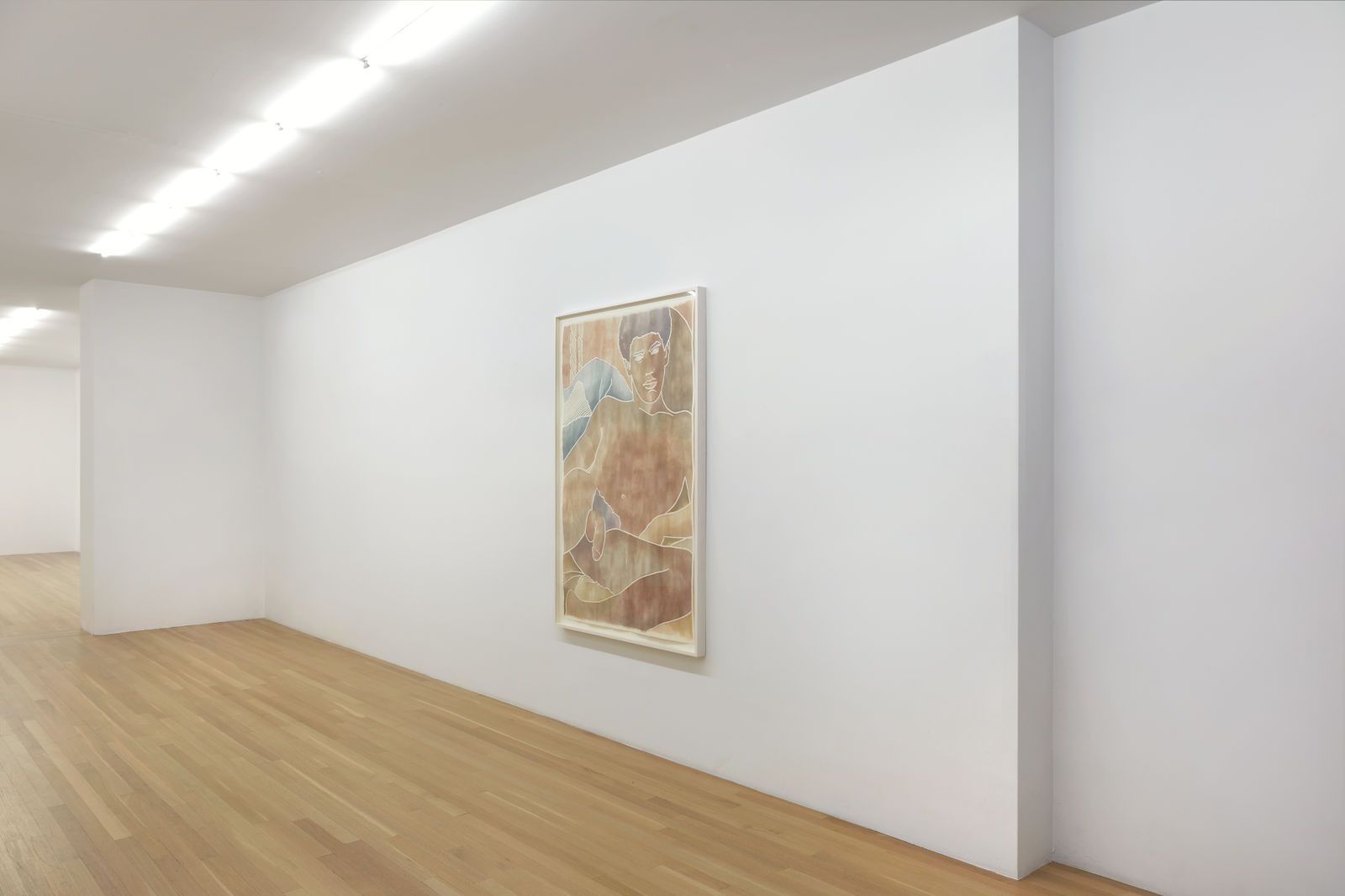 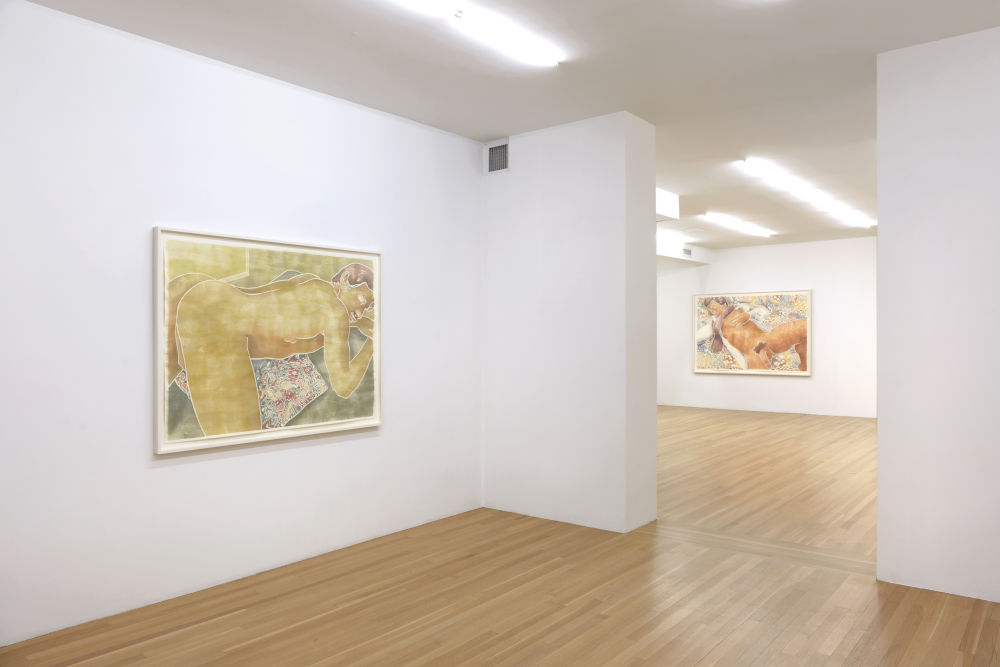 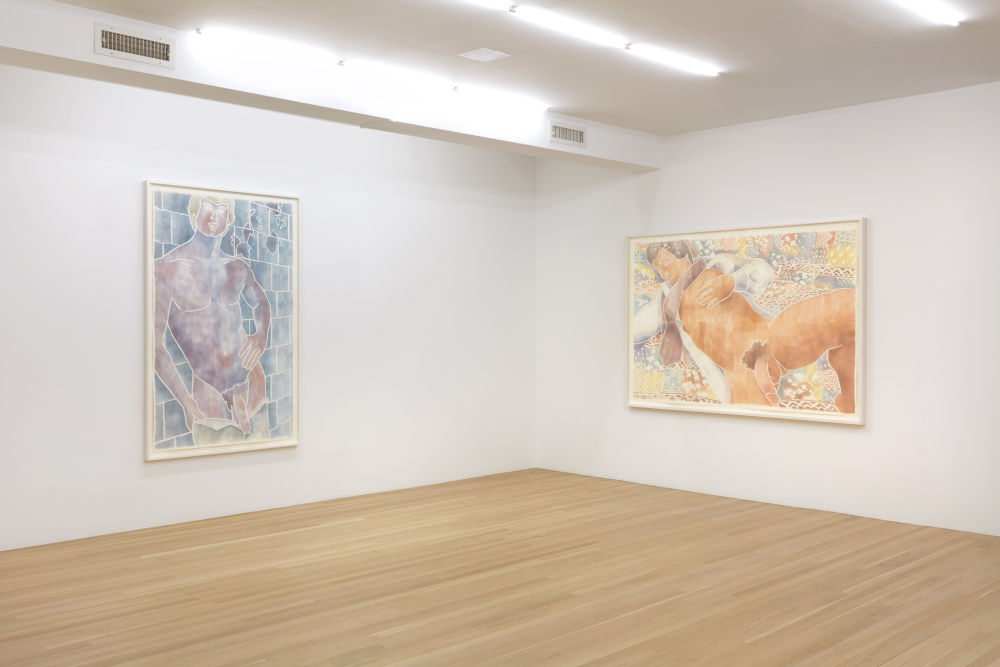 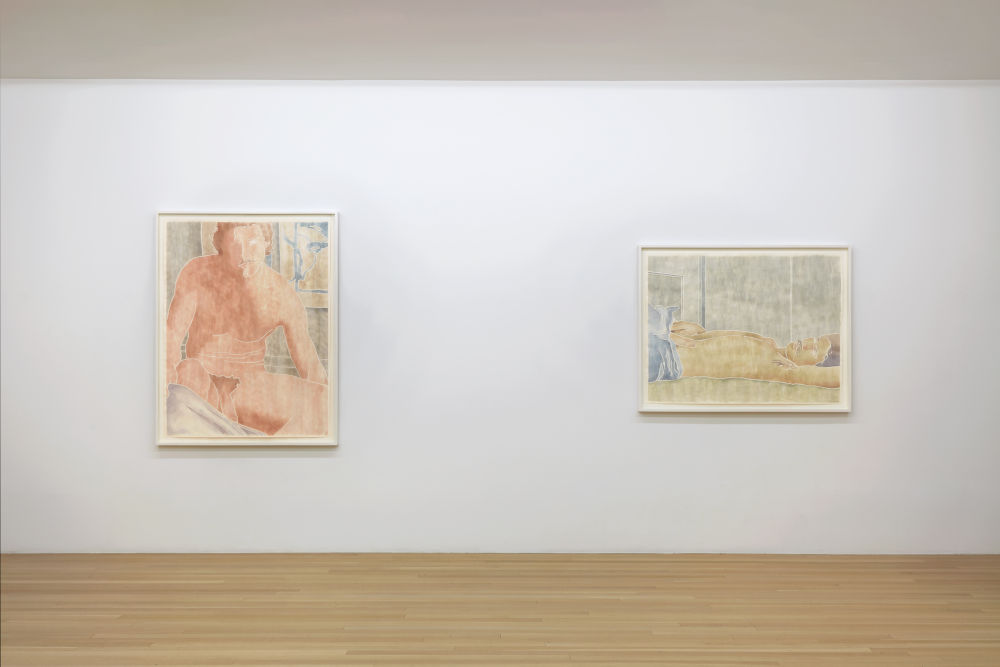 Monica Majoli took inspiration for her newest body of work from the sexy post-Stonewall, pre-aids hiatus still known as the ’70s, particularly centerfolds from Blueboy, which billed itself as “the national magazine about men.” In 1980, when I was 15—hold on. I find myself striking out for memory lane again, and I have to say that for the most part I just couldn’t care less about memory lane. (I guess people now call it autofiction.) Instead I’ll relay this little fact: In an interview for High Times, published in the early summer of 1977, Andy Warhol was asked what his favorite magazines were. He replied: “Blueboy, Pussy, Penthouse. Whatever I’m in.”

Or, whatever I’m into. Andy, like others, would have been into the range of Blueboy’s editorial content: interviews with author James Purdy or Perry King, the hunky lead of Andy Warhol’s Bad, co-written by Pat Hackett and directed by Andy’s longest live-in partner, Jed Johnson; into the first English translation of Verlaine’s erotic poetry; into “what really happened to” Montgomery Clift, a profile of Casablanca records, the “photoerotica” of Baron von Gloeden; into commentary on the political debacle initiated by Anita Bryant, via “Save Our Children,” to pass an ordinance to legalize discrimination based on sexual orientation or on the assassination of Harvey Milk; into keeping up with culture almost as much as they were keeping up with cock.

Blueboy’s founding publisher, Donald N. Embinder, a former ad exec at Benton & Bowles as well as an ad rep for After Dark, told the New York Times, in 1976, that “Playgirl and Viva made male nudity on newsstands viable”; it was the same year he took out a full-page ad in the trade magazine Advertising Age, headlined: “Now you can reach America’s most affluent minority…The Male Homosexual.” TMH was seen to be single and to have money to spare. The ads in Blueboy targeted an audience interested in self-care, bodily upkeep, and places in which clothes could be easily shed. The tagline for a K’WEST skin products ad made it clear: “Fashion Pointers for the Well Undressed Male—Clothes may make the man but only K’WEST makes the man touchable.” Contourex offered “a new exercise system designed to give you tighter, shaplier [sic] buns.” Cabana wear by International Male. Caftans by Ah Men.

Blueboy had a small part in the push to transvalue issues of class specificity into issues of taste—what’s classy, what’s not—rather than only into realpolitik. Some of the magazine’s models were trade, which was the vernacular before gay-for-pay, and before the entire mainstreaming of sexual preference—with its radical potential for undoing rote and rigid forms of relationality—became gay-for-pay or pay-for-gay—PayPal (read GayPal) in a sense, before the fact. In the quest to sell its dream, America has always privileged affluence, a dream of financial security, even clout, wooing a striving majority, whether they were part of a minority population or not, to vote with their wallets.

The fight to end the aids pandemic would rally grassroots coalitions and would stymie that push, if only for a moment; putting the action between the sheets into the streets. Fran Lebowitz has provided some of the most searching thinking on how we still live in the wake of that moment, the consequence of kinds of audience, many of whom would have read Blueboy alongside Interview:

Everyone talks about the effect that aids had on the culture—I mean, people don’t talk about it anymore, but when people did talk about it—they talked about what artists were lost, but they never talked about this audience that was lost. When people talk about, like, Why was the New York City Ballet so great? Well, it was because of Balanchine and Jerry Robbins and people like that, but also that audience…was so… I can’t even think of the word. I mean, if Suzanne Farrell went like this [tiny gesture of fingers] instead of this [the reverse of that tiny gesture] that was it: she might as well just kill herself. There would be like a billion people who knew exactly every single thing. There was such a high level of connoisseurship…of everything that people like this were interested in. Of everything. That made the culture better. A very discerning audience, an audience with a high level of connoisseurship, is as important to the culture as artists. It is exactly as important. Now, we don’t have any kind of connoisseur audience. When that audience died, and that audience died in five minutes. Literally, people didn’t die faster in a war. And it allowed, of course, the second, third, fourth tier to rise to the front. Because, of course, the first people who died of aids were the people, oh, I don’t know how to put this, got laid a lot. Okay, now imagine who didn’t get aids? Okay? That’s who was then lauded as the great artists, okay? If the other people who hadn’t died, if they were alive, if they all came back to life, and I would say to them, Guess who’s a big star? Guess! Guess who has a show on Broadway? Guess who’s like a famous photographer? They would fall on the floor. Are you kidding me? Because everyone else died. Last man standing. […] Things in the culture that had nothing to do with the New York City Ballet, it just got dumbed down, dumbed down, dumbed down—all the way down. What we have had, in, like, the last 30 years, is too much democracy in the culture, not enough democracy in the society.

Inspired by mokuhanga, Japanese woodblock printing, Majoli’s large-scale Whiteline woodcut watercolor paintings are based on images from Blueboy, circa 1976-79, a period she considers “the halcyon years of gay liberation, when homosexuality was understood to be politically charged and under threat, presaging the trauma of the aids epidemic.” Halcyon provides a way to understand the aesthetic of the soft-core centerfolds of the magazine: the lighting is sun-kissed, the palette warm with rose-golds’ ember glow, the bodies toned and unmanscaped. Mother Nature smiles on these men making themselves available to other men, a possibility she always intended. (Long before homosexuality was legal, porn would show men in showers or out in nature, among flora and fauna, and it would be theoretically stingy not to see such scenarios as emphasizing the cleanliness and naturalness of such pleasures, when they were still seen to be “dirty” and “unnatural.”) The models were known by their first names (“Joe”, “Roger”); some appeared a single time, while others became featured players; they all had histories, lives, and they’re seen in repose that is also work. Their cocks, balls, and buns remain, as they were, magnificent and inviting. The hard-edged, roided body of the 1980s—a “built” body weaponized, Ramboized (apotropaically and/or phantasmatically) against viral invasion and wasting—is nowhere to be seen.

While considering all that is lost when the map of masculinity permits few ways to trace the radical potential of male vulnerability, tenderness, as a source of strength and communing, don’t fail to reckon with what Monica achieves with the gentle but grand shift in scale from the magazine centerfold: these works are history paintings. They chronicle not only soft power rather than toxic masculinity, but also sexual fantasy, intimacy in which the nameable earns no more importance than the nameless or unnameable. The pigments with which the paintings are made, water-soluble, suggest tears and/or sweat (synecdoches for other bodily fluids), no longer mistaken as dangerous, contaminant, but, whether joyfully or sadly, communicating without need of language. These radiant, touching pictures embody a vision of how once we were in love with life.