For her first solo exhibition with Tina Kim Gallery, Mire Lee presents Carriers, the continental debut of her eponymous body of work shown at Art Sonje, Korea in 2020, and the Schinkel Pavillon in 2021. 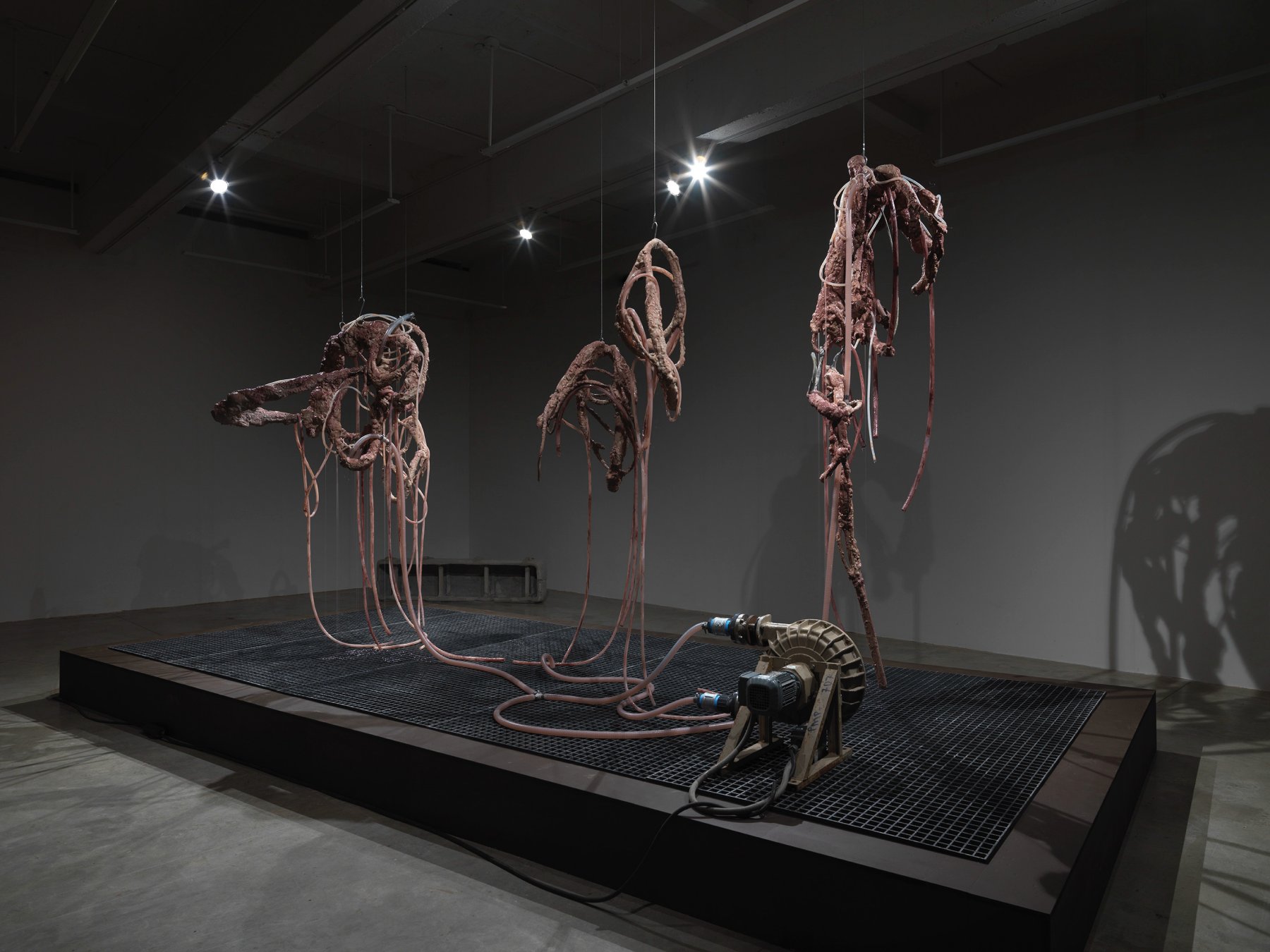 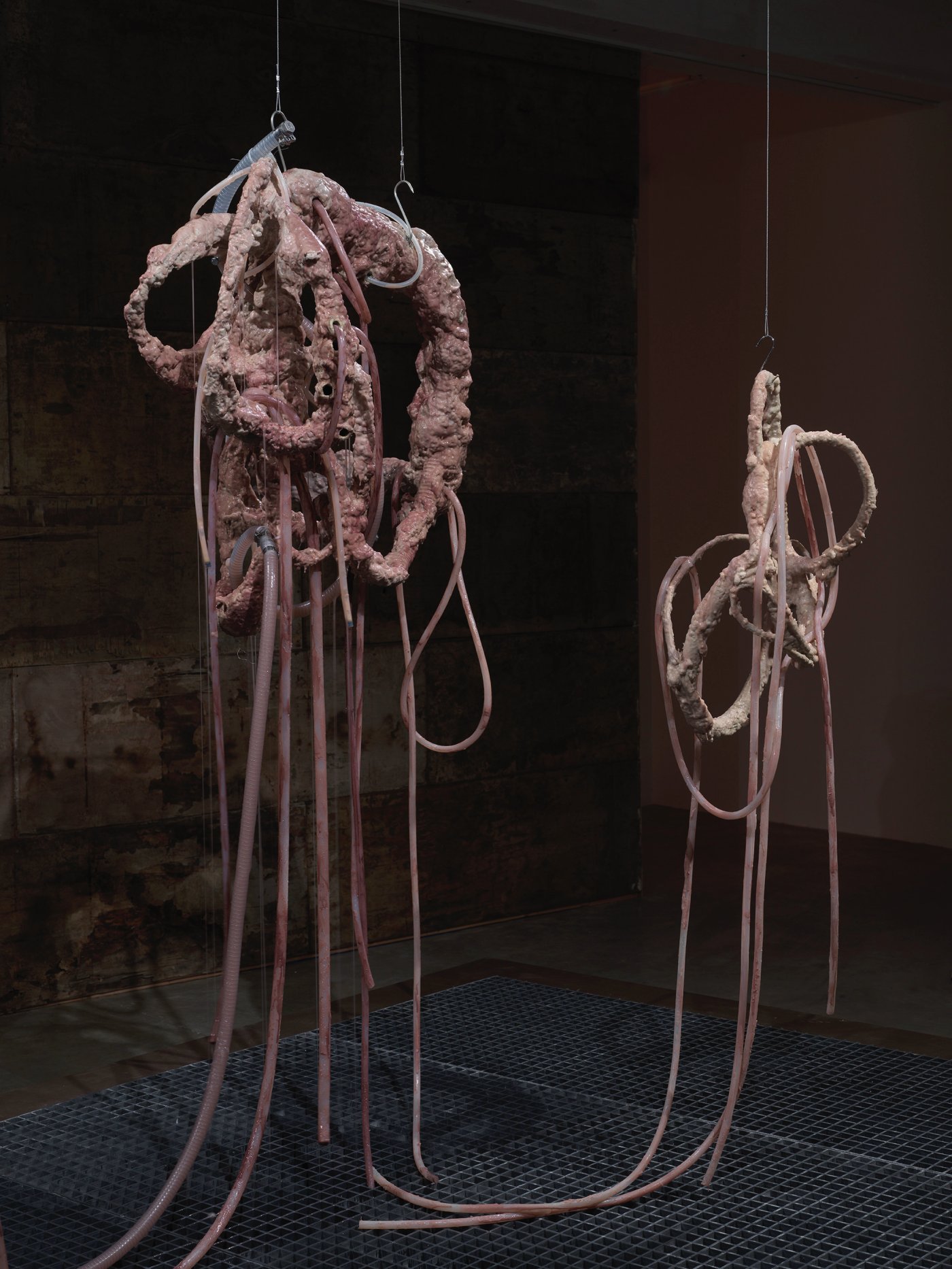 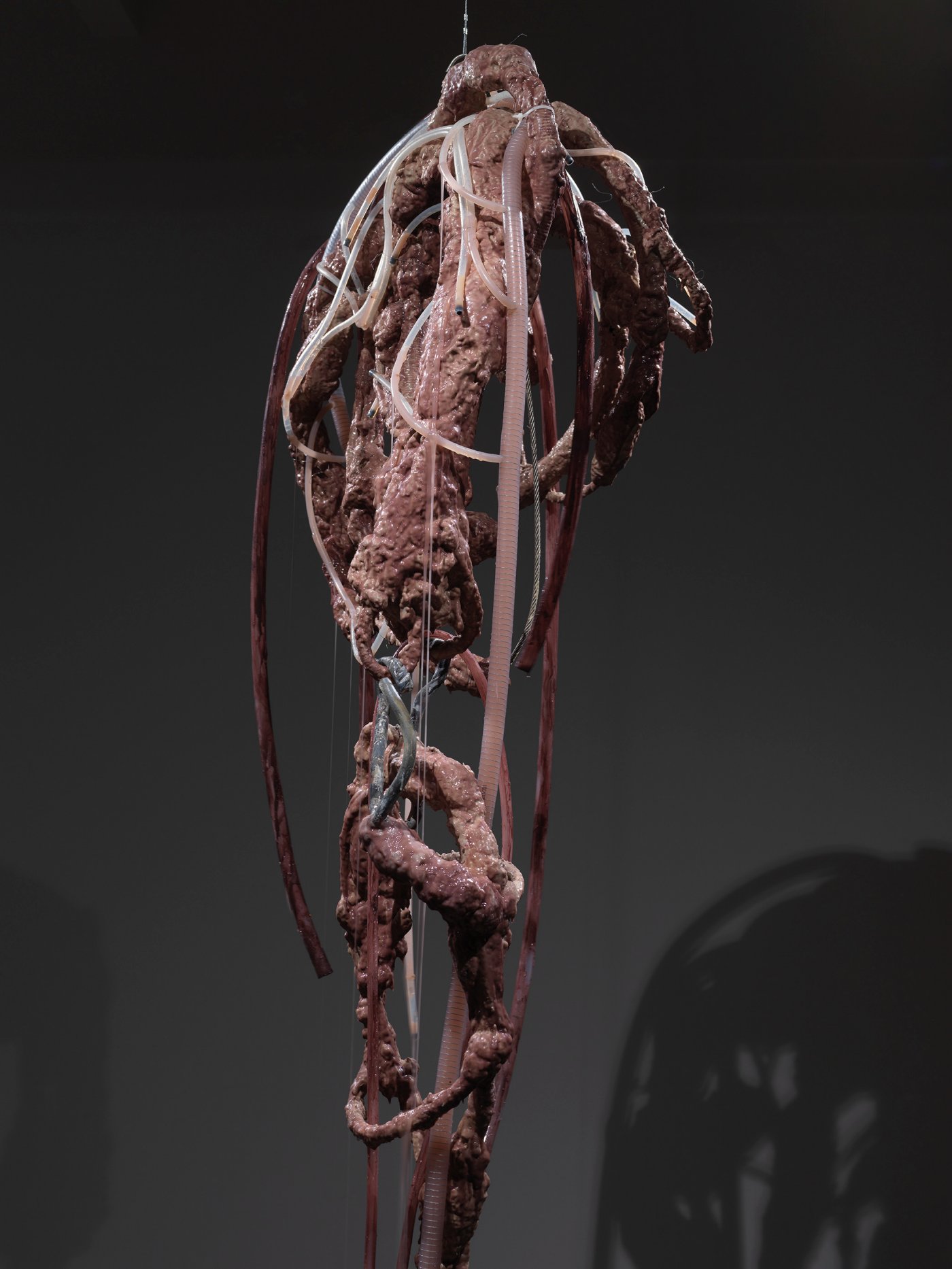 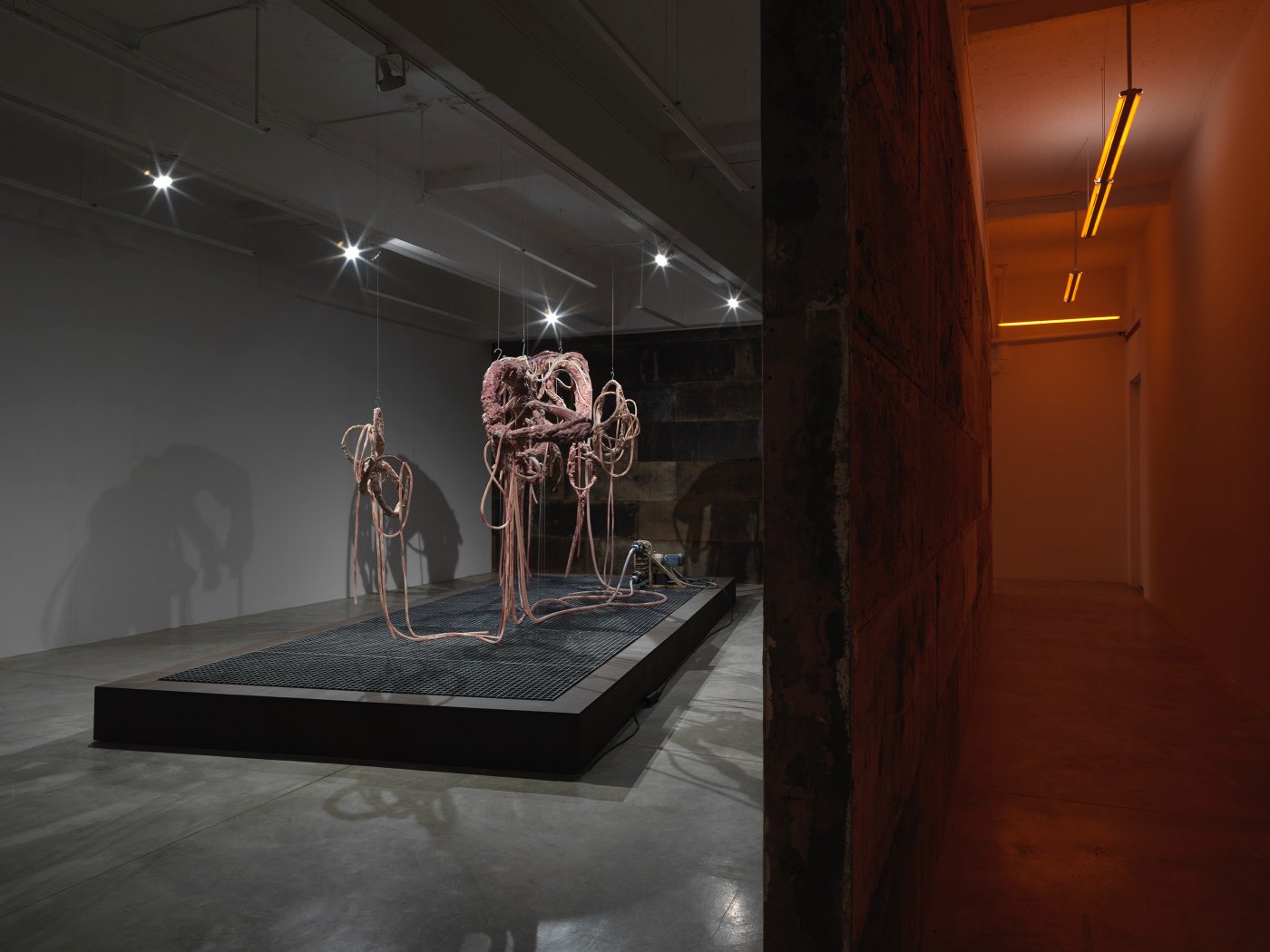 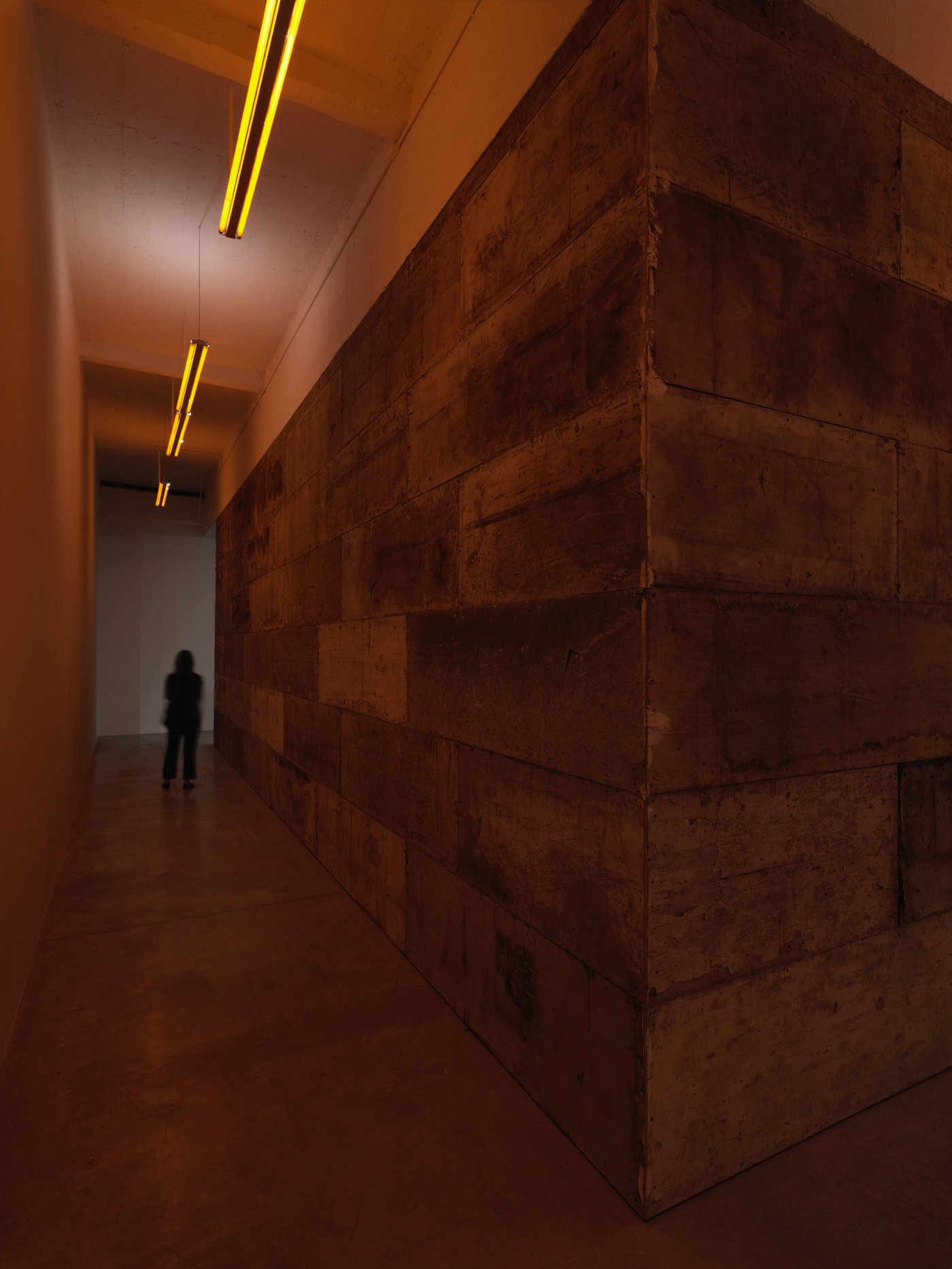 In the front gallery, a spectral video depicting Lee’s mother is projected onto a cast monolithic form, joined by a slippery curtain, and other grayscale sculptural casts, molded from functional objects that “carry” in their day-to-day utility.

Deeper into the space, Lee’s quasi-biomorphic “carriers” hide suspended behind a filthy, maze-like wall of used concrete molds, spurting an unidentifiable fluid out of a circulatory pump system commonly used in both dialysis treatments and industrial manufacturing. A long tank catches the fleshtone discharge, pooling before it is spit back out from the carriers’ unending, regurgatory struggle.

A telling reference for Lee is vore, a fetish involving the impossible urge to swallow the object of one’s desire in a total annihilation of boundary between self and other, necessitating a supreme violence. Rather than offer a clear aggressor or desiring party, Carriers, both the work and as an exhibition, instead turns to uncompromising partiality, reminiscent of the familiar or bodily in its spurting cavities without committing to a single, identifiable form. It is presented concurrently with Lee’s inclusion in the Venice Biennale, the Busan Biennale, and the 58th Carnegie International, in addition to her two solo shows at the MMK Frankfurt and the Kunstmuseum Den Haag in 2022.

Mire Lee (b.1988) lives and works between Seoul, South Korea and Amsterdam, Netherlands. She has earned a bachelor’s degree from the Department of Sculpture (2012) and a graduate degree in media art (2013) at the Seoul National University College of Fine Arts. Her recent solo exhibitions include: As we lay dying at Kunstmuseum Den Haag, the Hague (2022), Look, I’m a fountain of filth raving mad with love at ZOLLAMTMMK, MMK Frankfurt (2022), Carriers at Art Sonje Center, Seoul (2020), words were never enough, Lily Roberts, Paris (2020), Het is of de stenen spreken, Casco Art Institute, Utrecht (2019) and War is Won by Sentiment Not by Soldiers, Insa Art Space, Seoul (2014).

Courtesy of the Artist and Tina Kim Gallery. Photo by Dario Lasagni