A proposal by Eva González-Sancho

Mira Sanders’ work deals with the positioning of ‘something’ in a concrete space – the placement of an object, a person, or a situation, crystallised in a single space, a terrain that acts as a support for intervention and for measuring and marking out. 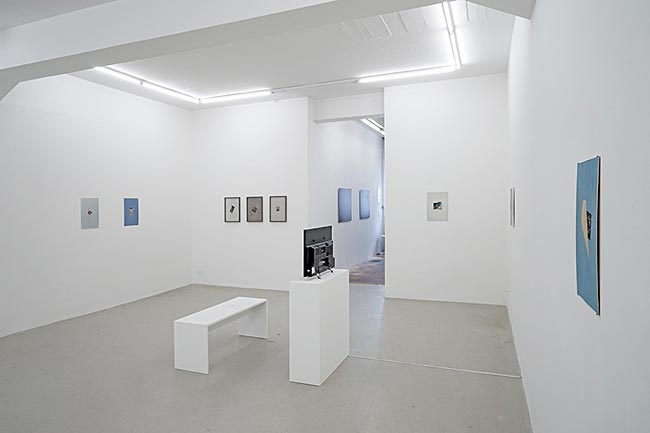 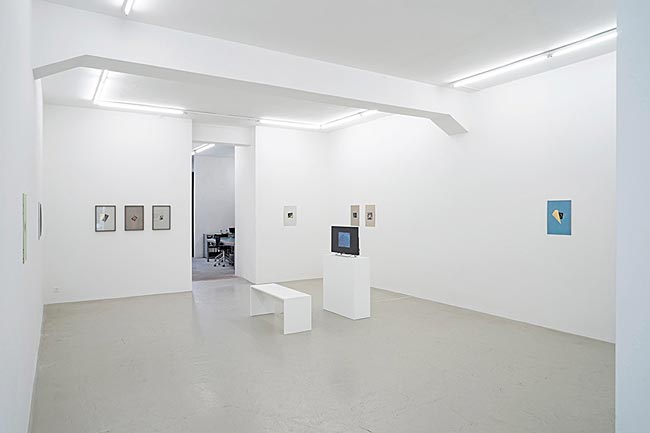 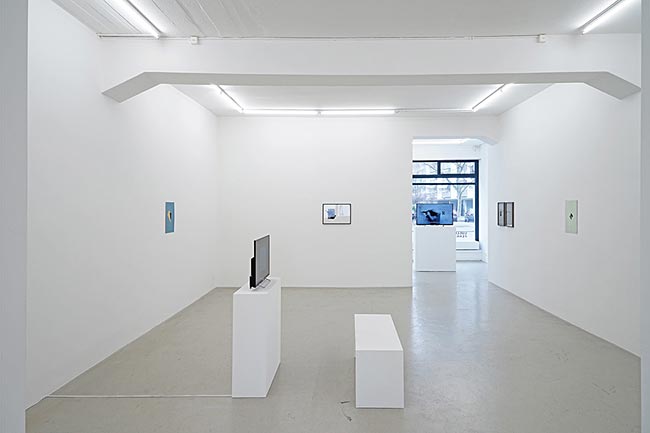 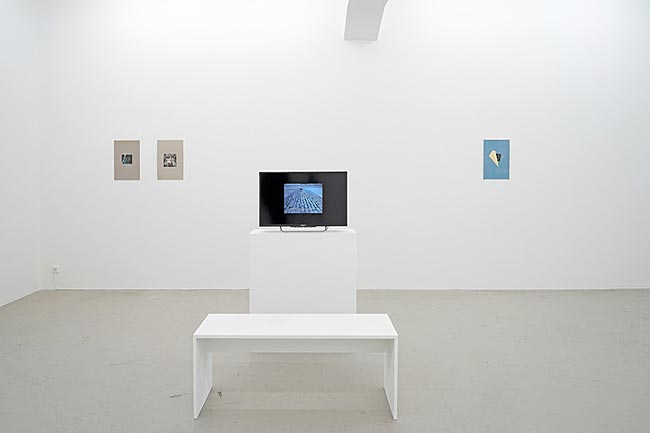 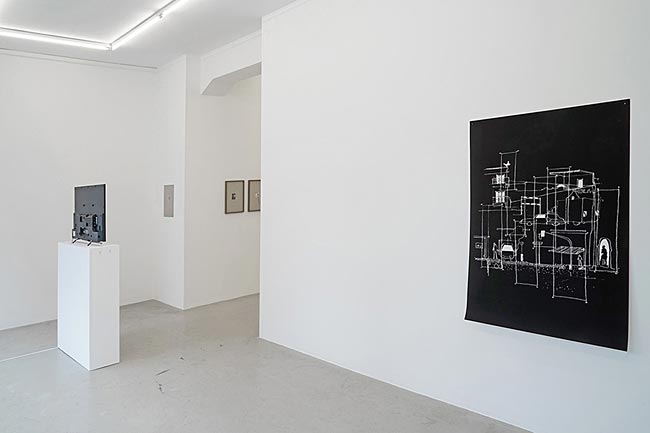 Lines and boundaries, cartographies and perspective drawings, overlap to describe itineraries, routes, transitory spaces, architectural blueprints or site plans, in which words delimit and redefine places, trajectories and ways forward. The artist shows physical places but the ultimate purpose is to sketch, to suggest a temporary relocation, as scraps of narrative, spread across various time-frames, or as small fictions described in minute detail. The methodology of a text.

For her exhibition at the Lullin + Ferrari Gallery, Mira Sanders shows a series of works related to this special interest in lines – time lines – the fleeting landscapes that configure a journey (from the artist’s conception of the private). Sanders uses drawing, collage, video, the word, in a kind of segmentation of excursions whose point of departure is often the artist’s own studio (Scale 1:2500 Studio #1; Scale 1:2500 Studio #2 – two zenithal photographs taken in 2009, of a work surface scarred with a tracery left by the action of a cutter). Lines act as a kind of folding and unfolding of time, a simultaneity, for example in the plans that form part of Dans une profondeur atmosphérique du temps (2015) [In an atmospheric depth of time] or some of the collages in the series Traceur de lignes (2013) [Line tracer]. The first superimposes the different moments of a trajectory in a single space: the paper on which these are ‘aligned’. The second focuses on an action radiating from the centre which seems to disperse into the gallery space; a series of time lines, vanishing lines, invisible lines that pinpoint a series of displacements; but that also deconstruct them in some way. This refers to the Swiss architect Bernard Tschumi (cited in another of Sanders’ works here exhibited) and to the relations that Tschumi describes in his theories of spaces and the events that happen in them through processes of destructuring and superimposition. At the same time, the relationship to architecture and to urban planning in Mira Sanders’ work often explores ways of approaching the idea of ‘public’, by signifying an itinerary in space, or ways of thinking of space and its limits through an itinerary configured as segments of time.

Words and various frontiers: Mira Sanders questions borders, the edges of physical space and the intimacy of journeying, of fitting into and fitting in with places, not the practice of public space so much as the practice of the commonplace. “They put borders whenever they want” is one of the somewhat quirky phrases that subtitle images in the video Silent Letters (2009), a series of letters to an unknown recipient in which language lends meaning to images stolen from public space whereby Sanders again questions the unfolding of a journey in time.

Mira Sanders (b. 1973) studied painting and multimedia at Hogeschool Sint-Lukas in Brussels. Her work (a combination of videos, drawings, installations) is a constant research on places and on the persons and stories that inhabit them. In 2007 she was one of the laureates of the Young Belgian Painting Award. Her work has been shown, among other places, Galerie VidalCuglietta (Brussels), Galerie Les Filles du Calvaire (Paris), ARGOS centre for art and media (Brussels), BOZAR (Brussels), deSingel (Antwerp), Museum Dhondt-Dhaenens (Deurle), Centre Pompidou (Paris), Huize Frankendael (Amsterdam) and CEAC (Xiamen). Mira Sanders is a lecturer at the Faculty of Architecture campus Sint-Lucas (Brussels-Ghent) KULeuven, active in the Mixed Media department and in the Explorative Architecture trajectory (master program). She runs her PhD in the Arts ‘On the impossibility to trace a Roman road on the scale of a time.’ at the KULeuven (Belgium).
Eva González-Sancho is an independent curator. She graduated with a fine arts degree from The Art Department at ISLAP-ERG in Brussels and also has an MA in Science and Technology “Exhibition Trades,” specializing in contemporary art, from the Rennes 2 University in France. She was director and curator at Frac Bourgogne (Dijon, FR) from 2003 to 2011 and at the Art Projects Office Etablissement d’en face Projects (Brussels, BE) from 1998 to 2003, while teaching the History of Exhibitions at Metz University from 2001 to 2004. Currently she is developping the pilot project for a biennial in Oslo.