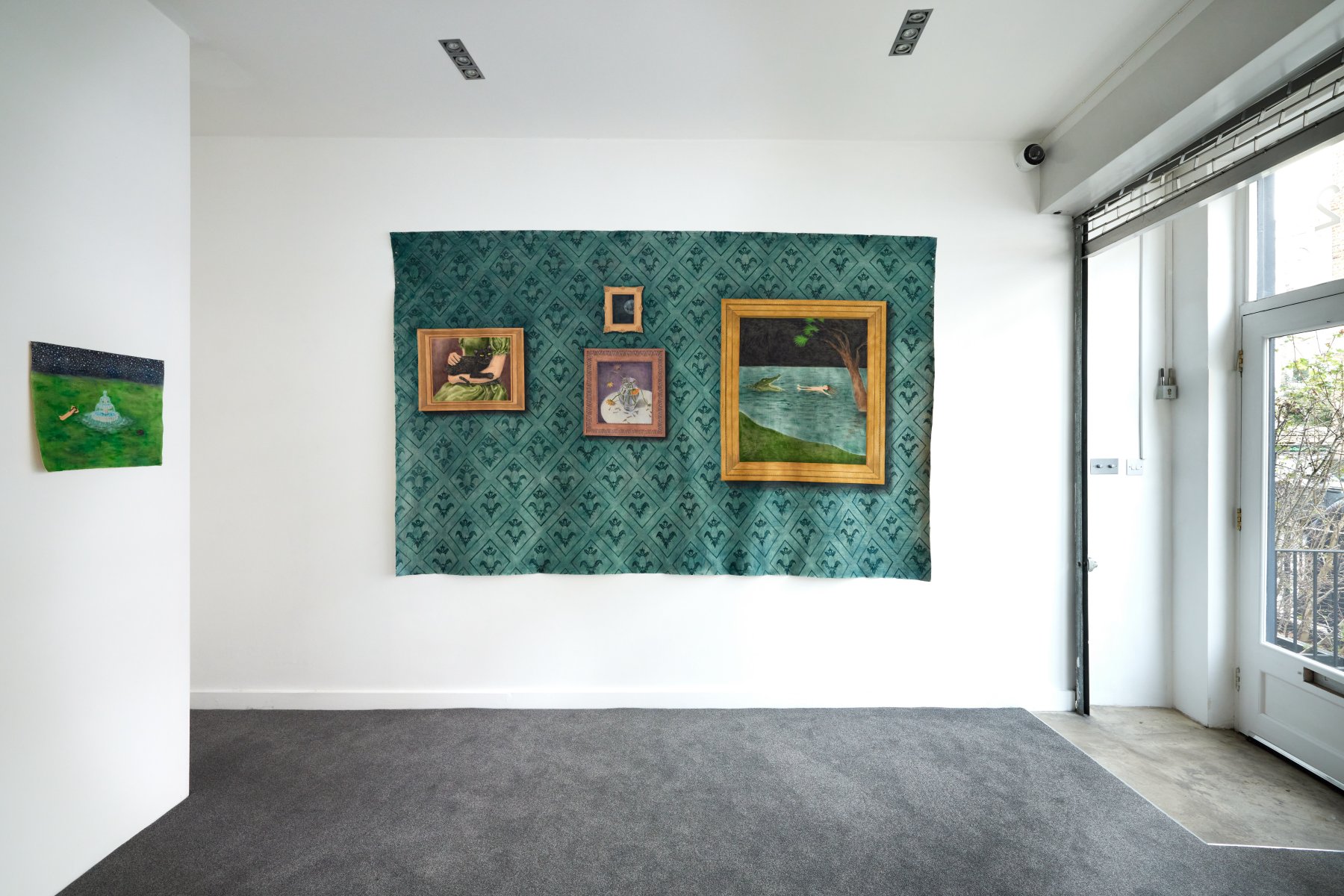 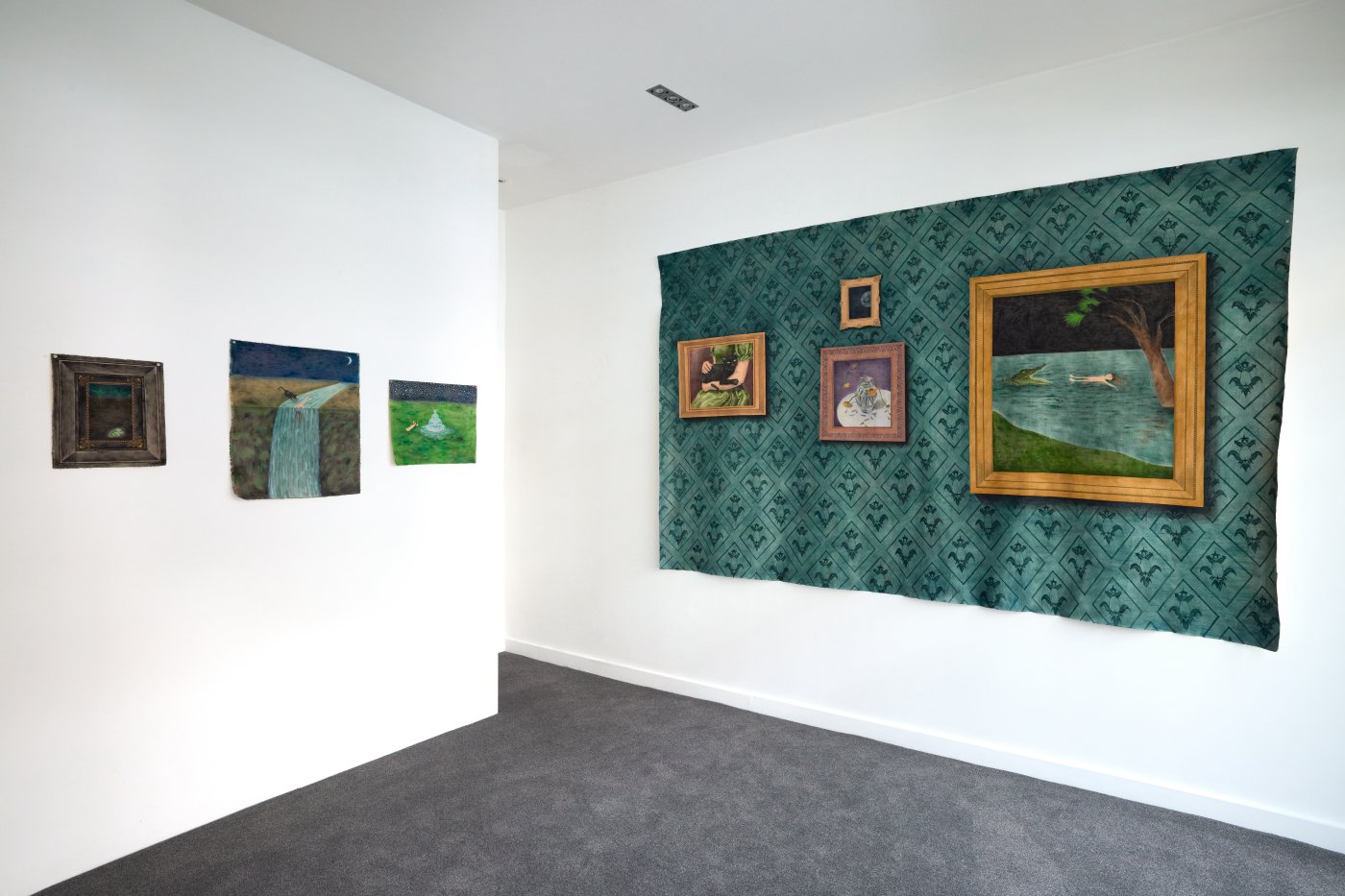 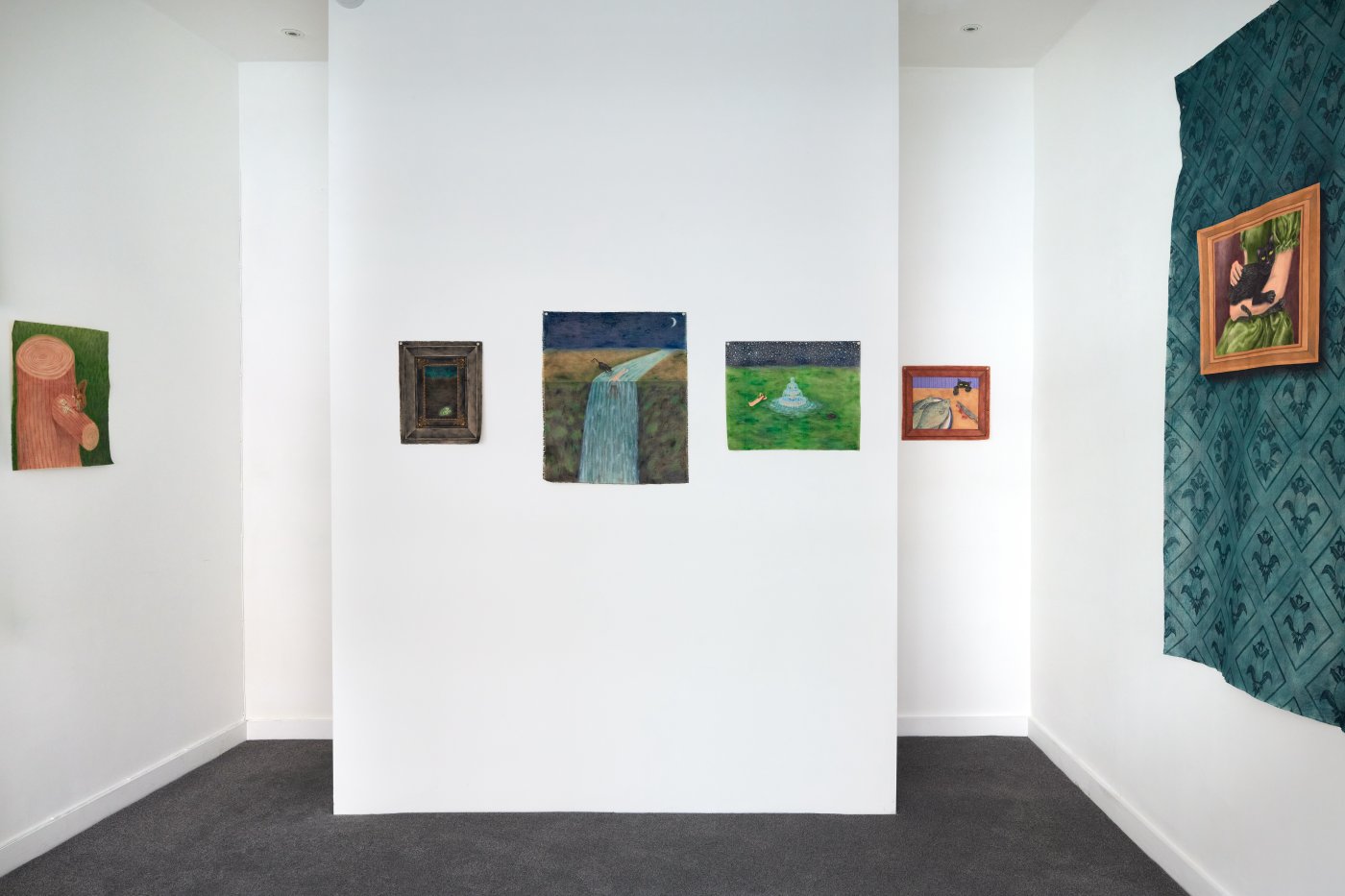 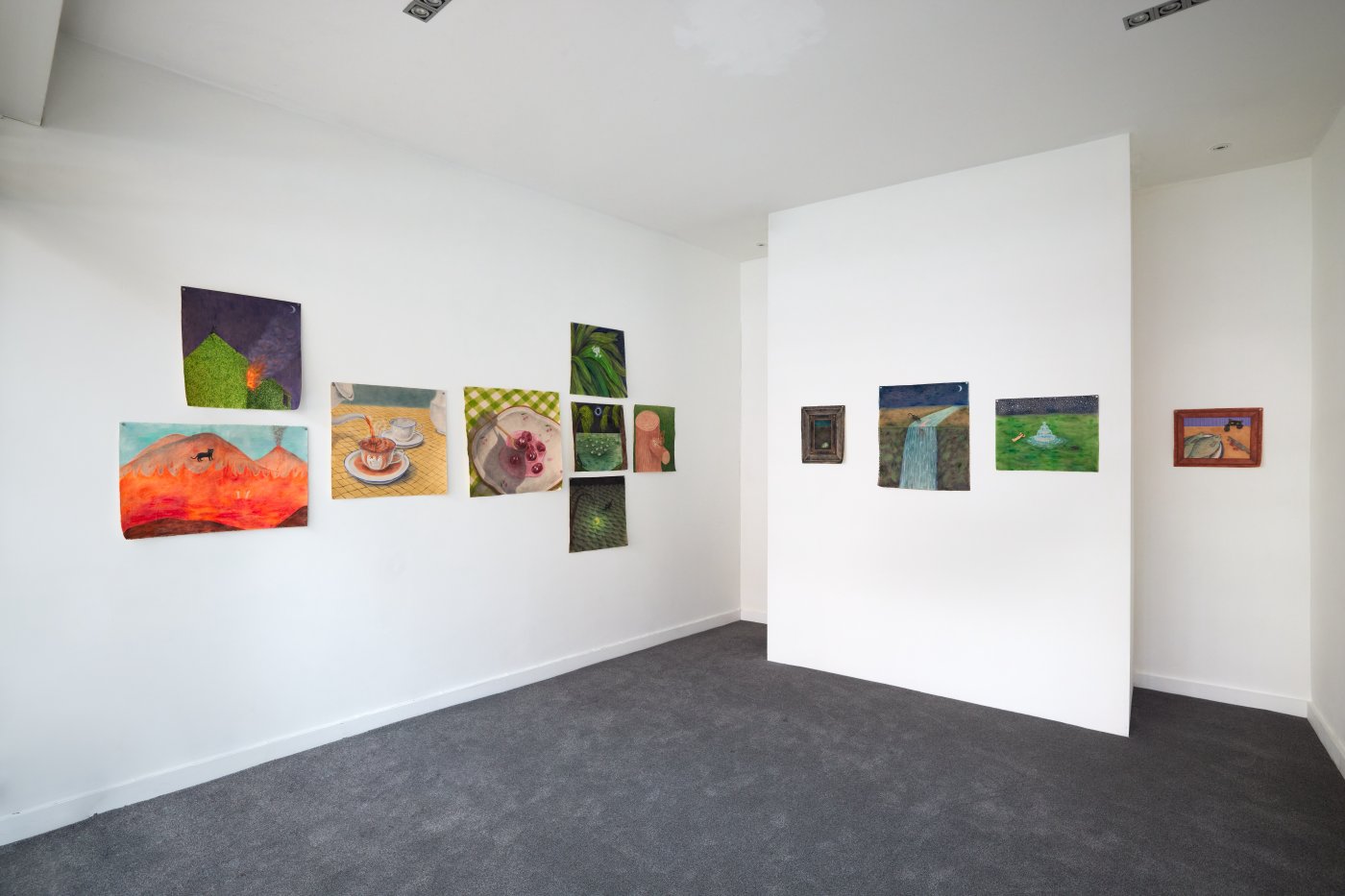 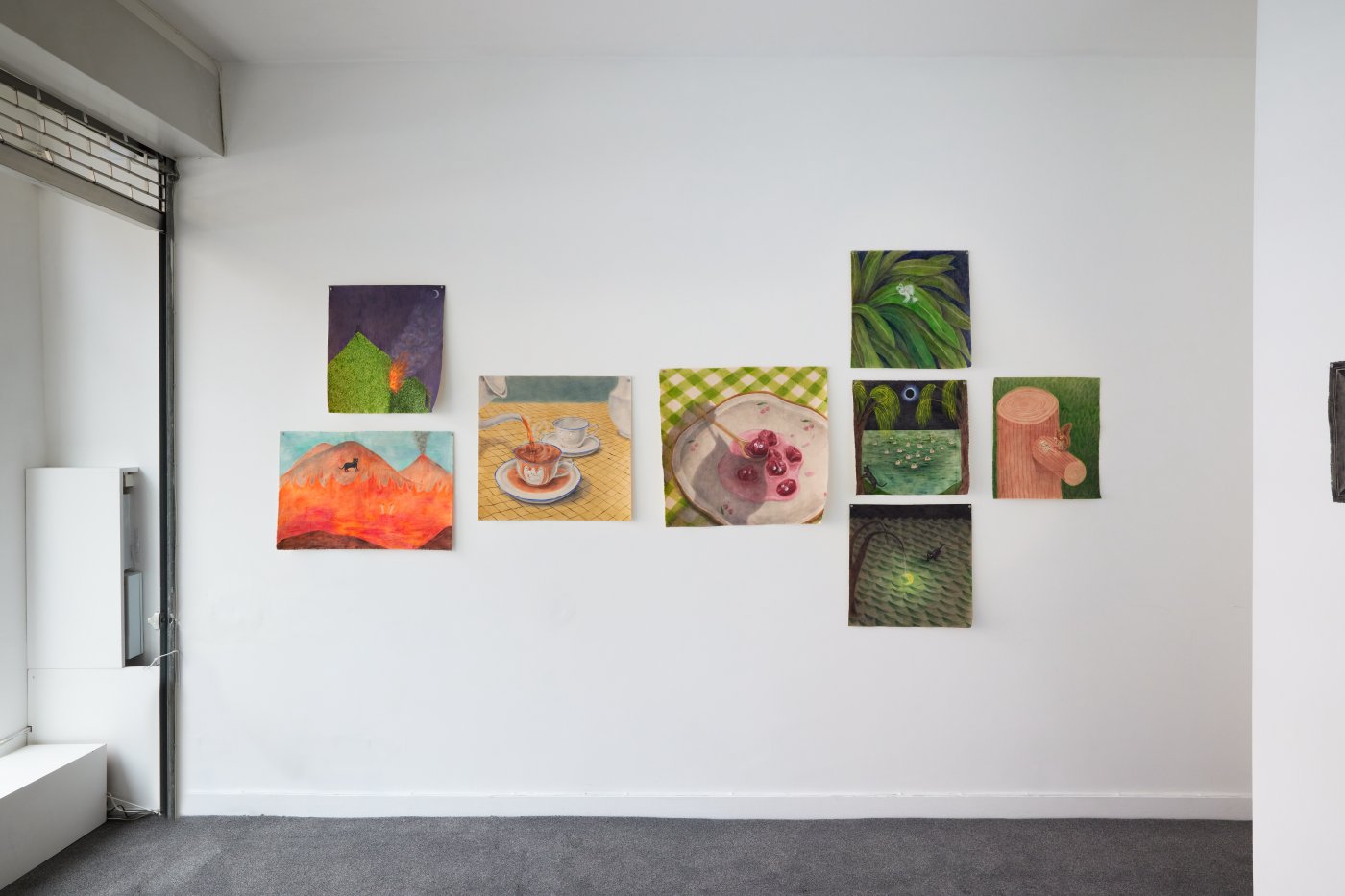 Minyoung Kim is intrigued by Phenomenology, the philosophical study of the structures of experience and consciousness. Rather than approaching Phenomenology from a scientific advantage, or in the form of written commentary, Kim is inclined to pick up a paintbrush and paint – creating mirrors to some of her inner-most feelings.

From works past to present, each contains poignant memories and expressions of anxiety, regret, desire and dreams. The very things she is not able to articulate directly through language. Kim says that ‘semantics fails to truly express these things. Unstretched canvases convey a sense of freedom – with linens unbounded and thus, physically unrestrained from wooden frames and the historical art reference of traditional canvas painting. There is a specific method that Kim uses to create imagery, with finished compositions looking blurry – nodding to an emotive recall of sensations. These dream-like images, evanescent at times, suggest that if one was to reach out a grasp them, they would simply slip away. Fading reminiscences gesture to Kim’s own dreams – with imagery that is strangely familiar and also a source of true inspiration for the artist. These fable-like narratives are characterized by danger, and also mystery lurking on the horizon.

Crescent moons or creaturely cats become emblems that are repeated time again. These are more than markers of popular culture, they are insignia to hazy, spiritual nights that have become timeless throughout folklore, poetry, books and film. Kim seeks out the deepest of moments and revels in their wunderkammer capacity to spark profound, sometimes even melancholy sentiment. In some paintings, the viewer can often see faint crescents reflected in the surroundings, though numerous obstacles have to be passed to reach the light. The hurdle to reach transcendency is a key characteristic in fable stories that tend to illustrate a moral point. Kim’s cats can also be viewed through a humorous lens, with their greedy mannerisms and observational haunch proving a satirical edge. The cat becomes a vehicle to communicate Kim’s own cynical outlook on modern society and interaction.

The multifaceted interpretations that lie within the paintings deviate from more straightforward conclusions that fables center on. Kim says ’Irony is fascinating to me, and also, the ability of painting to evoke laughter, which is not considered in painting as often as it should. The bizarre and eerie emotions that reflect inner state are better realized in juxtaposition with humour. Happy, sad, serious, light – the flickering between these states, are very human, very authentic to our physiological experience’. The fairy tale toned colours build an atmosphere in the work, making precarious, anxious-filled situations seem even more elusive and confusing. Yet it is quaint, animated details that dissipate the sombre moments, allowing the viewer to situate themselves within.