“The cognitive utopia would be to use concepts to unseal the non-conceptual, without making it their equal.” (1)

In his first solo presentation at the gallery Meyer Kainer, the South Korean artist Min Yoon uses and subverts the spatial structures of the room, which has been named after the Austrian architect Boltenstern and designated for exhibitions since 2007. 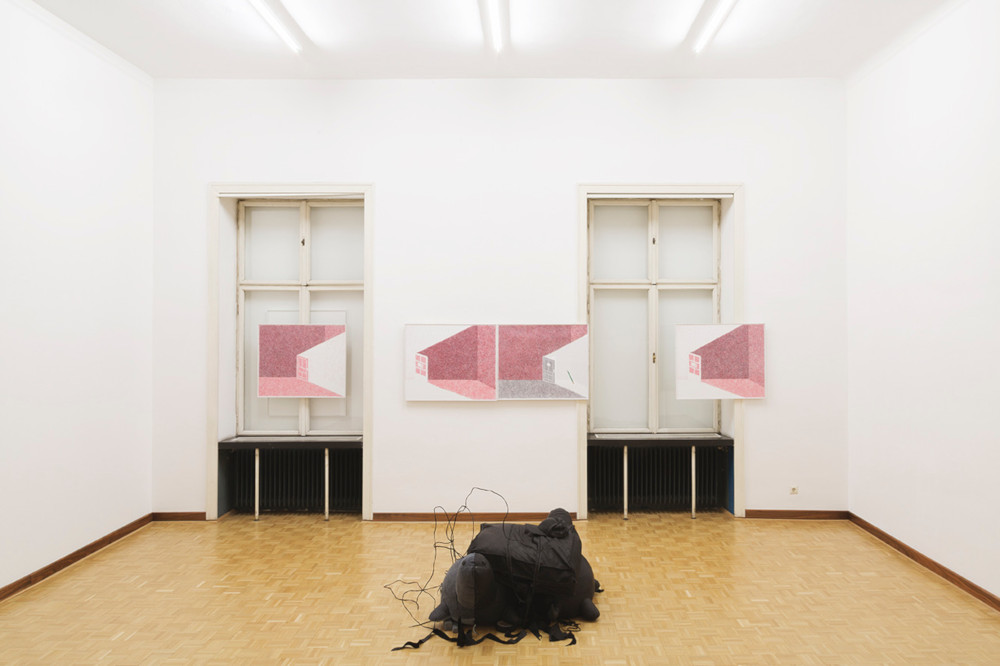 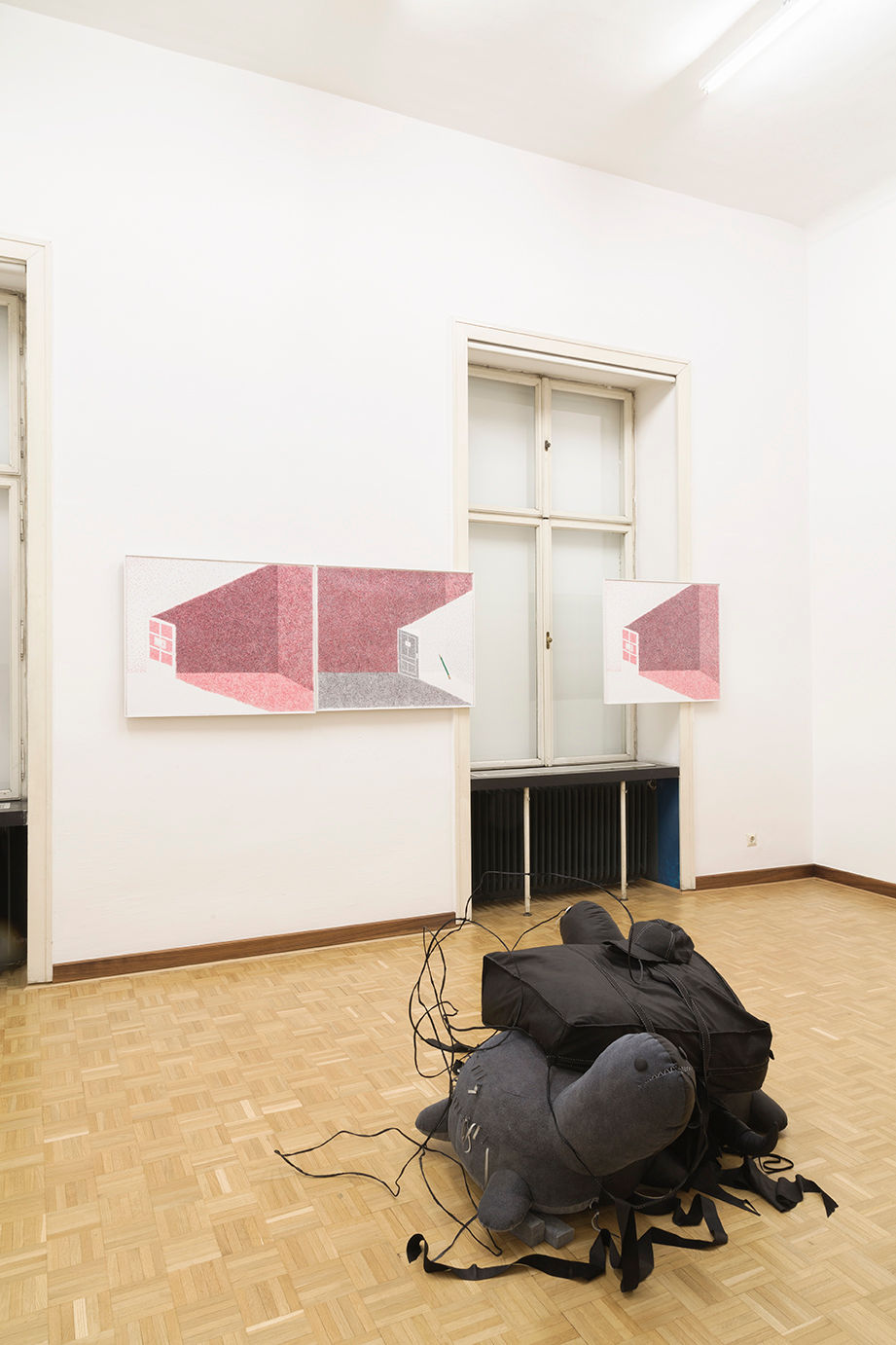 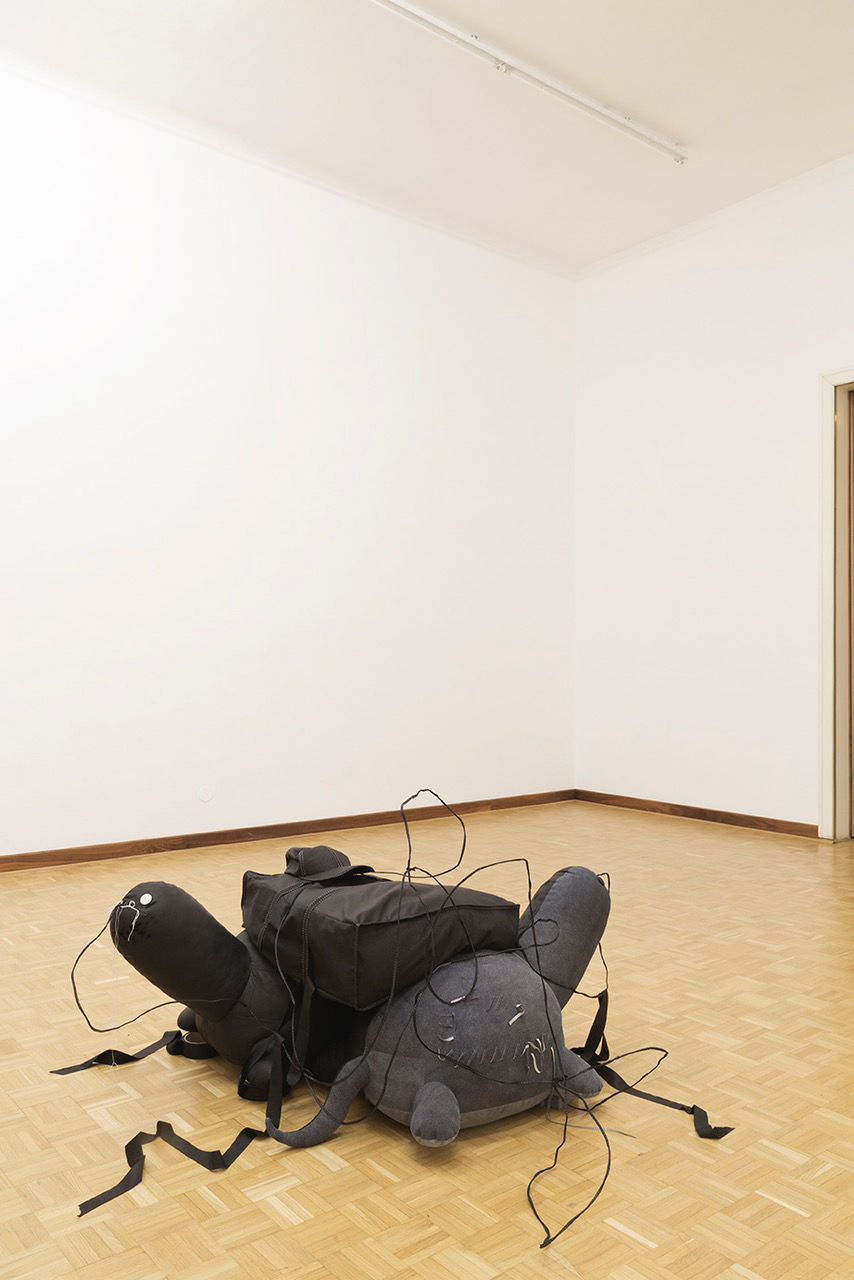 Ironically, Yoon installs four images in the size from 72 x 84 to 72 x 86 cm, on the wall containing window niches, which in turn depict rooms in hatching style. The frames are covered with crocheted woolen textures, a delicate anthropomorphic gesture with lasting surreal potential. One picture also contains a portrait study of a tool that already has been used by the artist several times and in different contexts – a pencil – and which also provides the motive for the invitation card of this exhibition. A wall in another picture indicates cracks and refers to damages to the fictitious building left in disrepair and the vulnerability of its architectural structure. Perched on not entirely unrolled leather straps on the floor are two sewn leather turtle sculptures, conjoined by a common load and facing in different directions. They also serve as metaphorical triggers in the calculated play of the imagination, which allow for several possible narratives and references of varying complexity. Concrete references to a main narrative are not pursued as Yoon evades distinctly assignable forms of address and, with regard to the structure of the exhibition, strives for finely tared and simultaneous movements of concealment and visualization. Connotations of transparency are replaced by those of skepticism. There is something that is shown, but there is equally something being concealed that is not visible. Sculptural statements are made, painterly explanations suggested, unambiguously verifiable author proofs; yet perhaps withdrawn only during the mounting of the exhibition and left wanting. This exhibition is thus pervaded by a sense of ‘looks-and-feels-like’, presenting itself as its own mimicry. But in this process it also permanently feeds the doubt, comparable to the historical form of the trick routine cups and balls, in which a performer moves three cups in such speed that only seemingly allows the observing teammates to memorise the procedure and the ball below to identify the correct cup. By presenting different media levels of exhibiting in relation, they are relativized. The observers see the conditions that the exhibition evokes in mystifying echoes, yet without logical or rational references. This exhibition could for instance also be a dream, a literary adaptation or even a contextual analysis of melodramatically clichéd creative crises. It is none of those, yet it could be any one of them. Min Yoon presents the conditions of exhibiting along with the exhibition, proving that today they are too far-reaching and total in order to identify the culpable or innocent. There is only desire and supply, with the one being inseparably entangled in the other. What does not imply that, which desires is innocent and that, which offers to supply, is culpable, or vice versa. The separation between subject and object, between observer and work is outmanoeuvred on multiple levels; the artist himself eschews attributes and role ascriptions, deliberately constricting the format of the exhibition so that it is able not only to unfold its own performative potential, but ultimately also to release the adroitly concealed abundance of detail with regard to subject matter and craft.